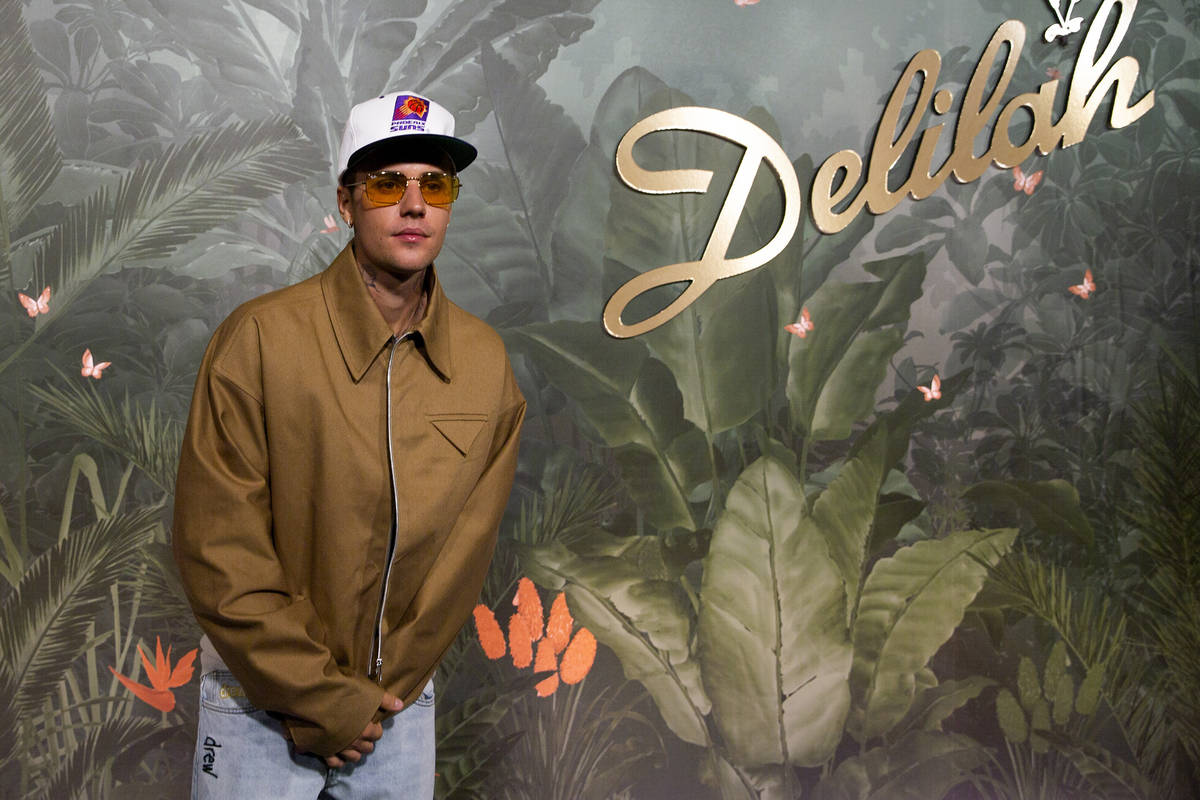 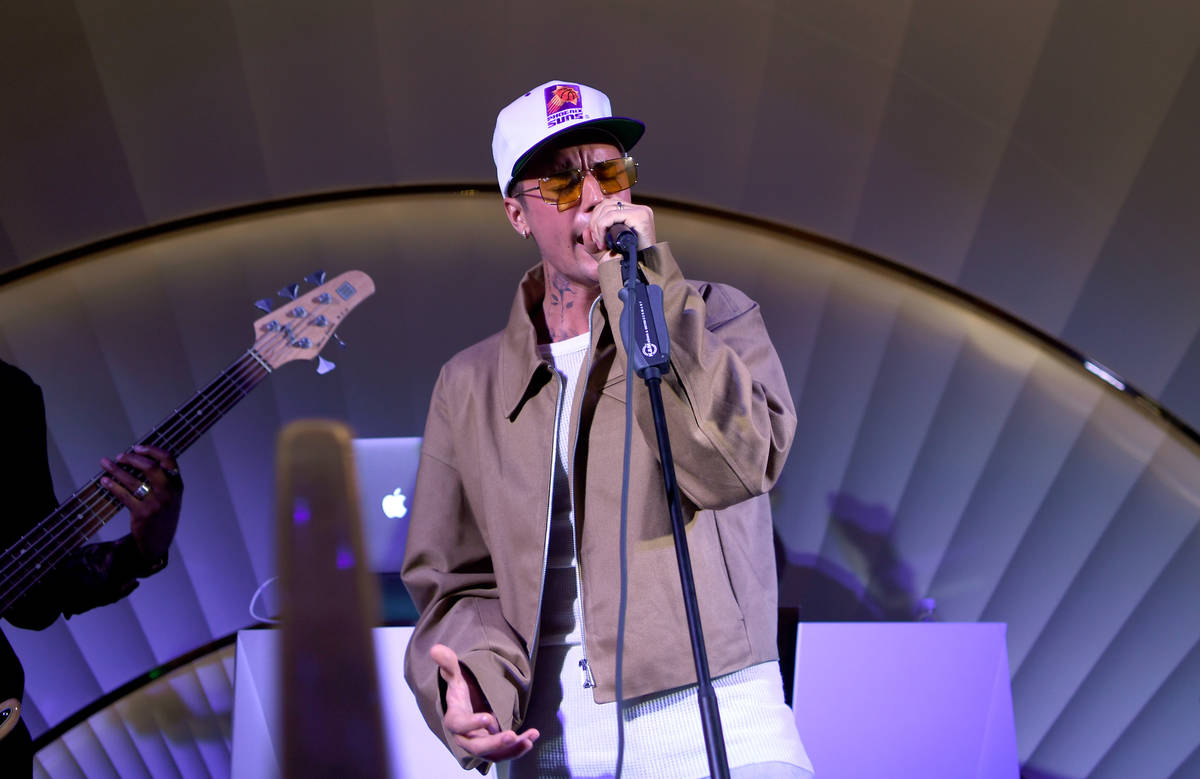 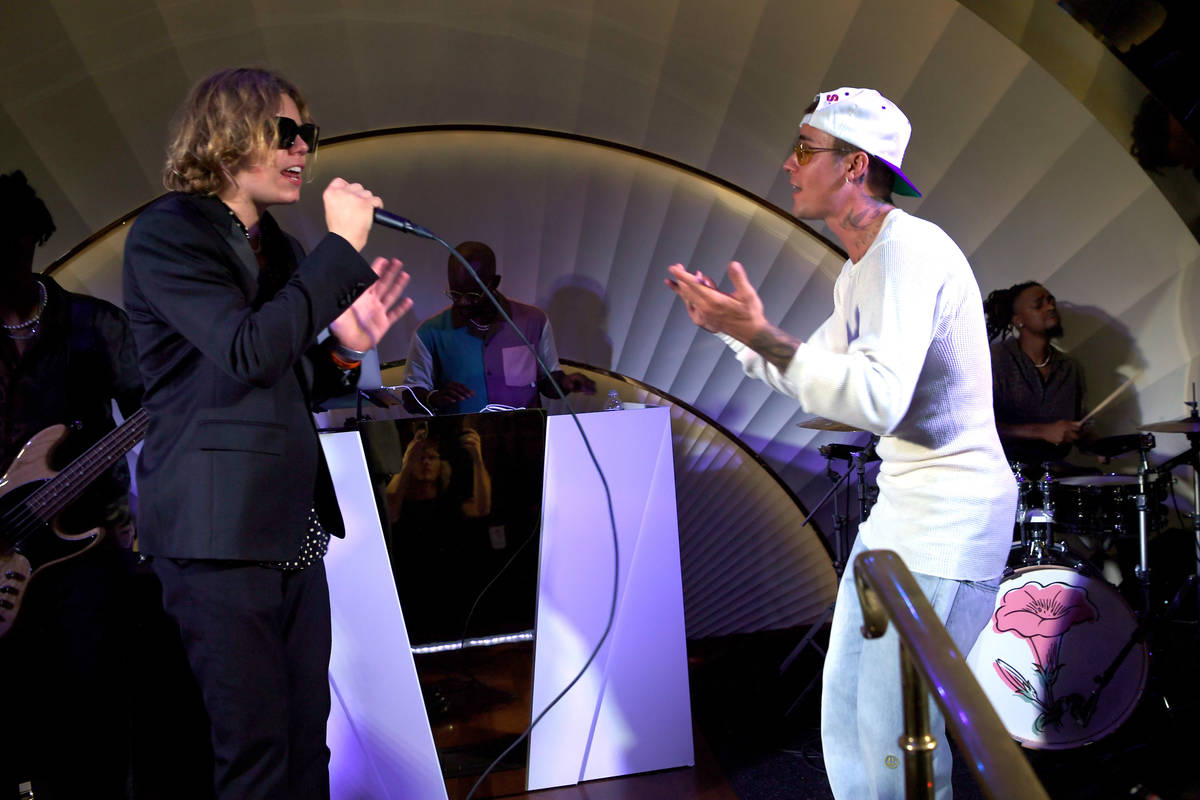 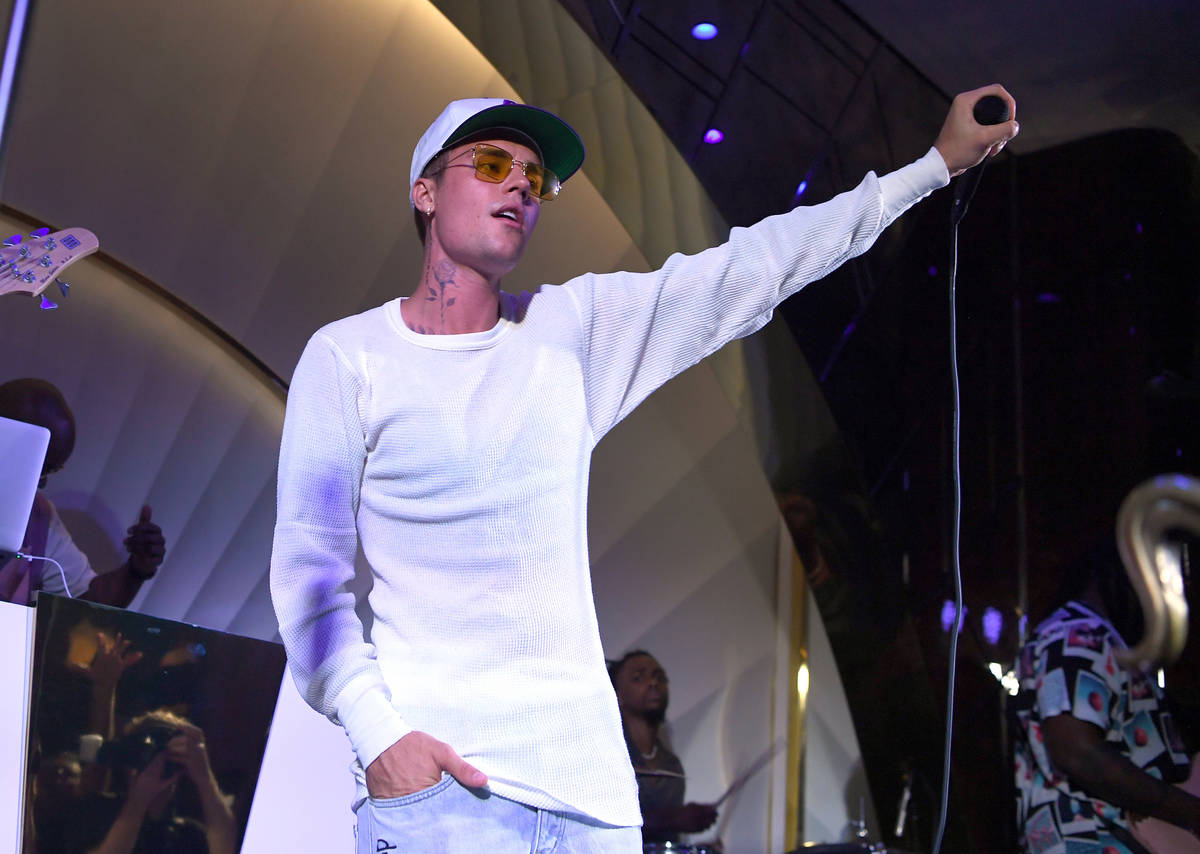 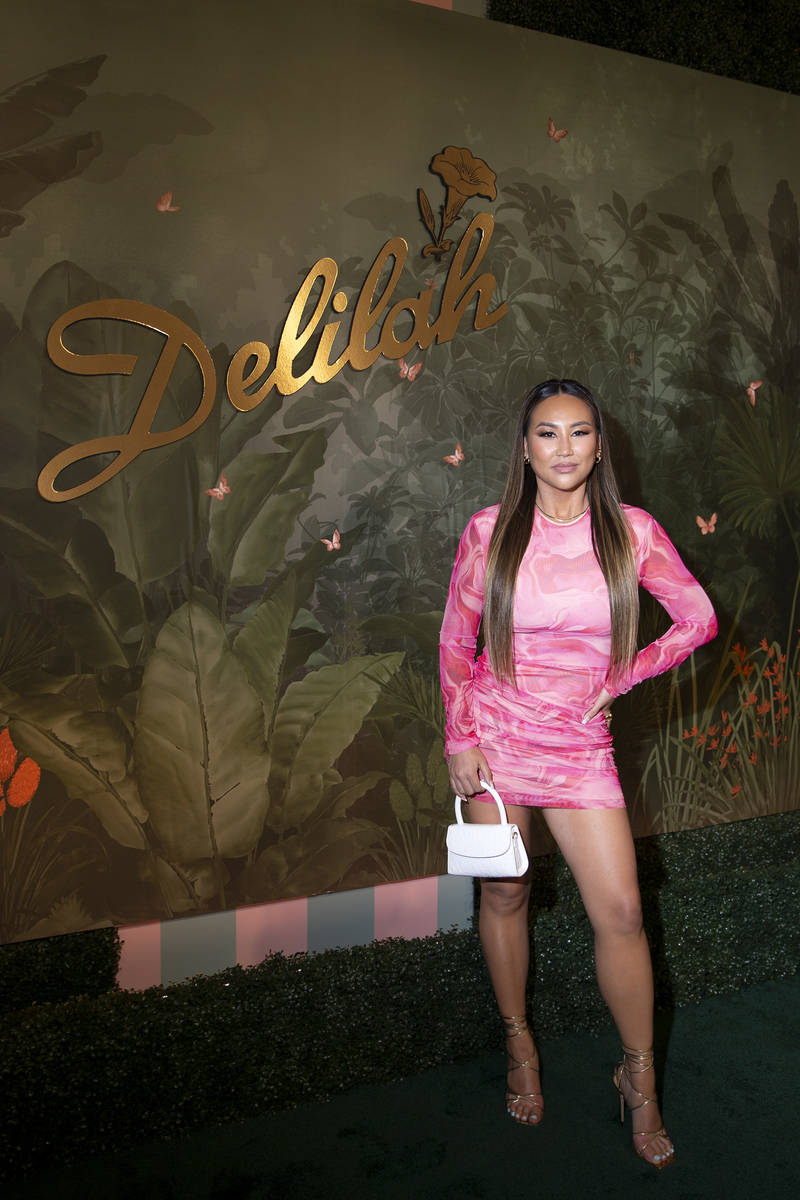 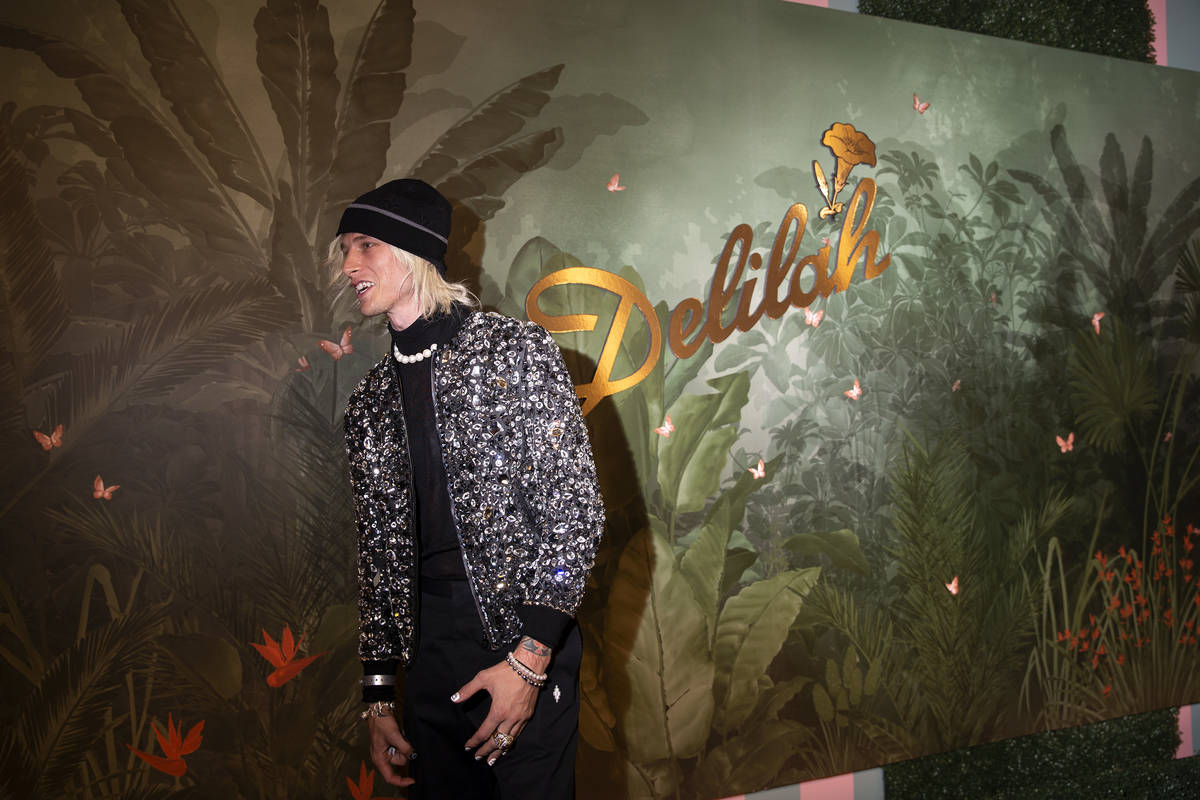 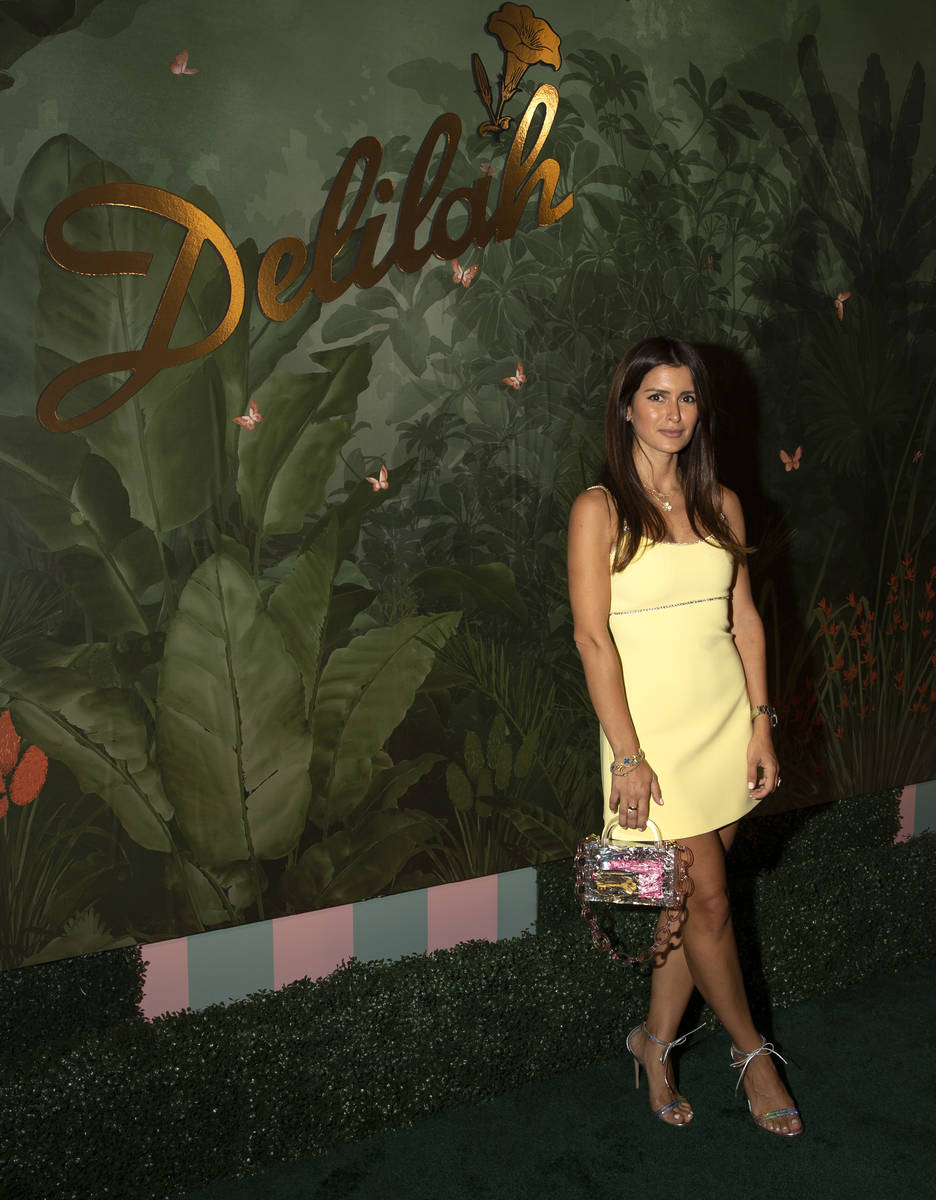 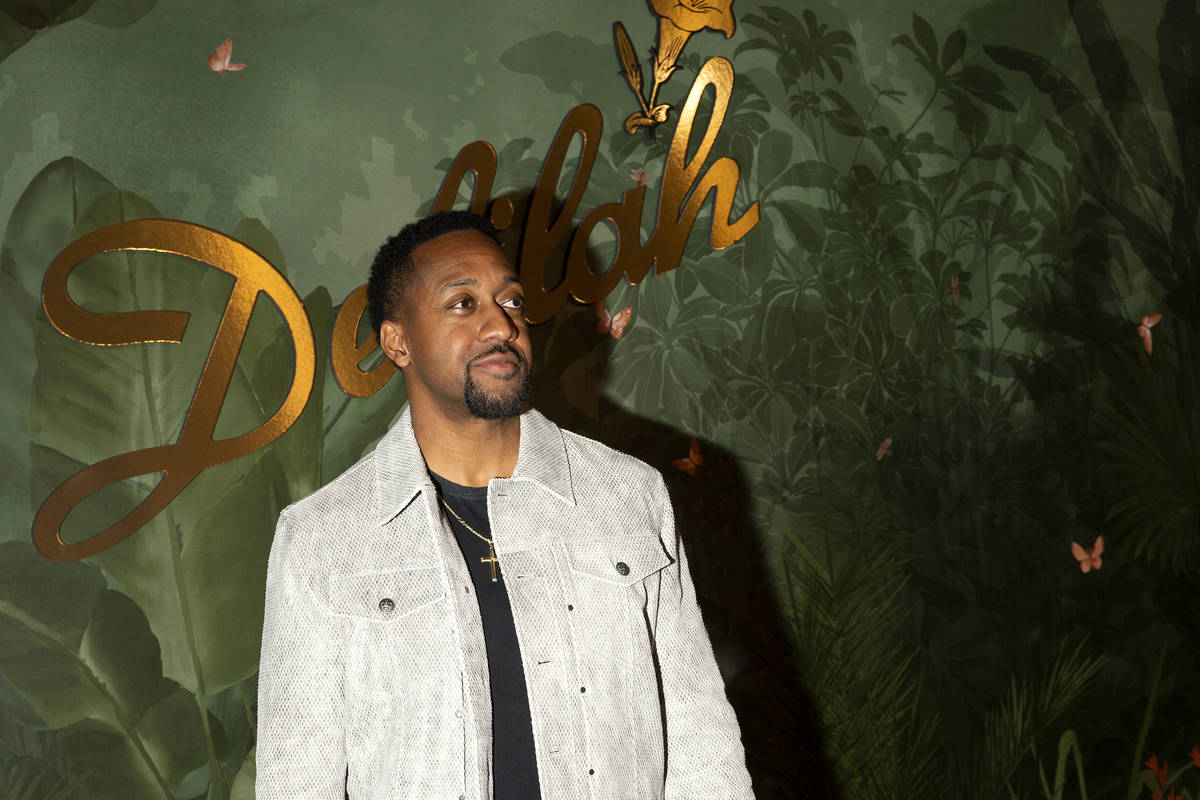 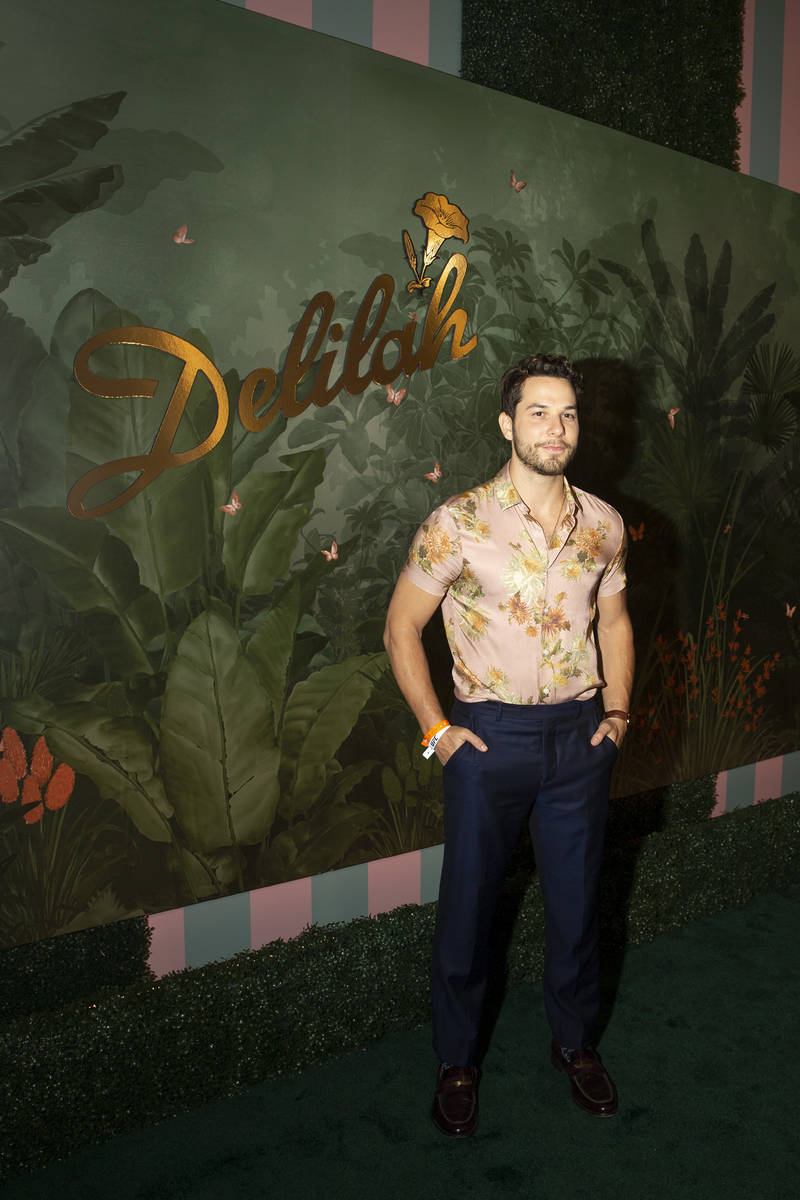 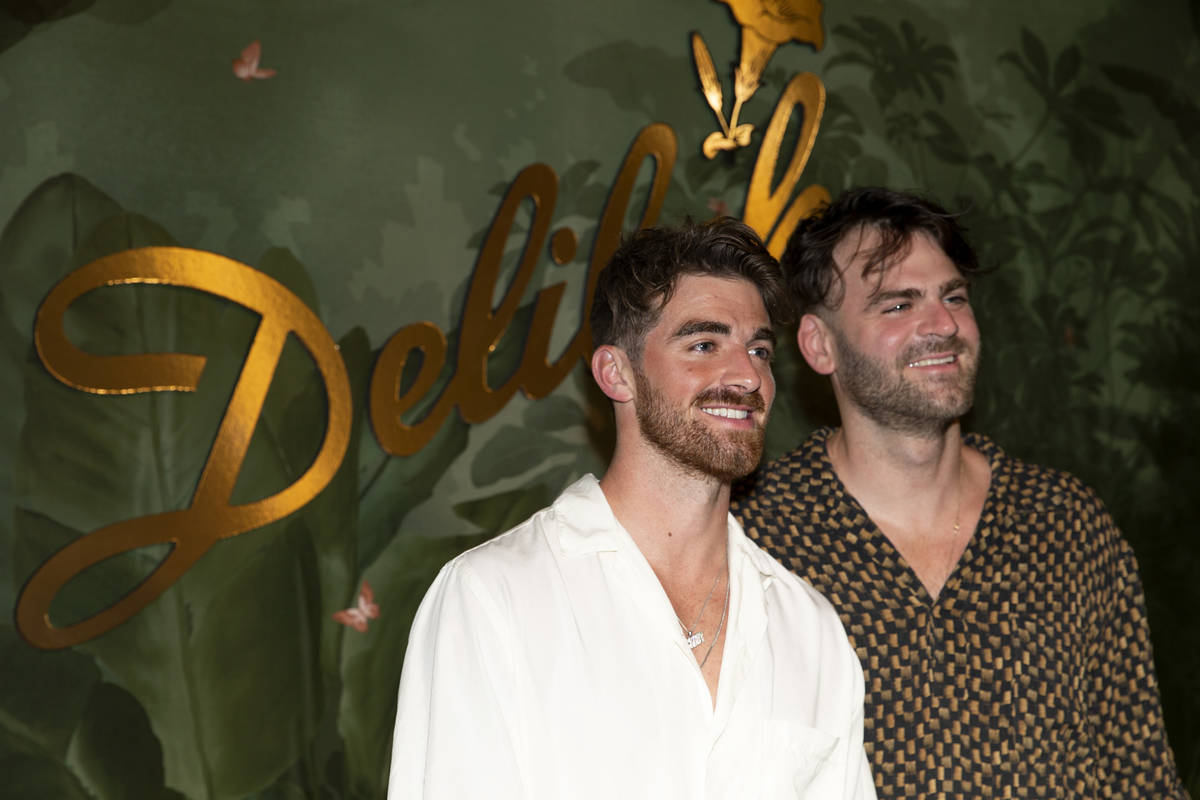 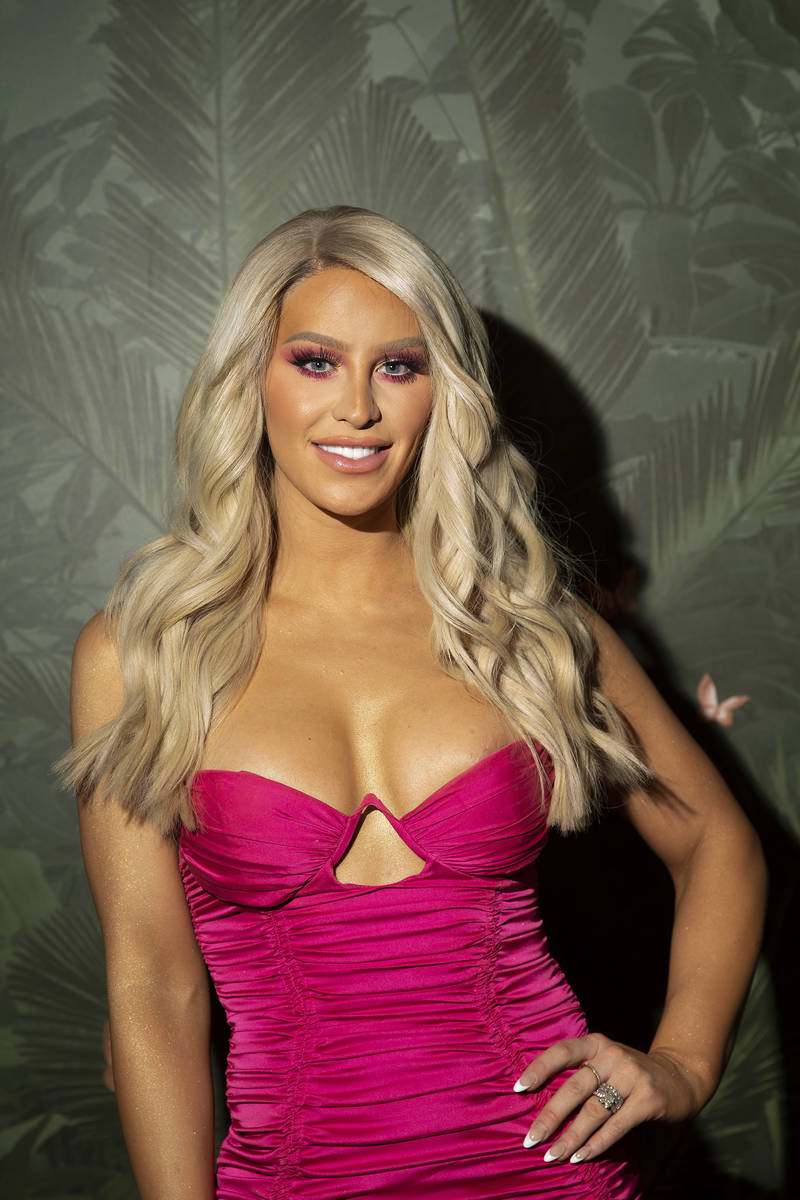 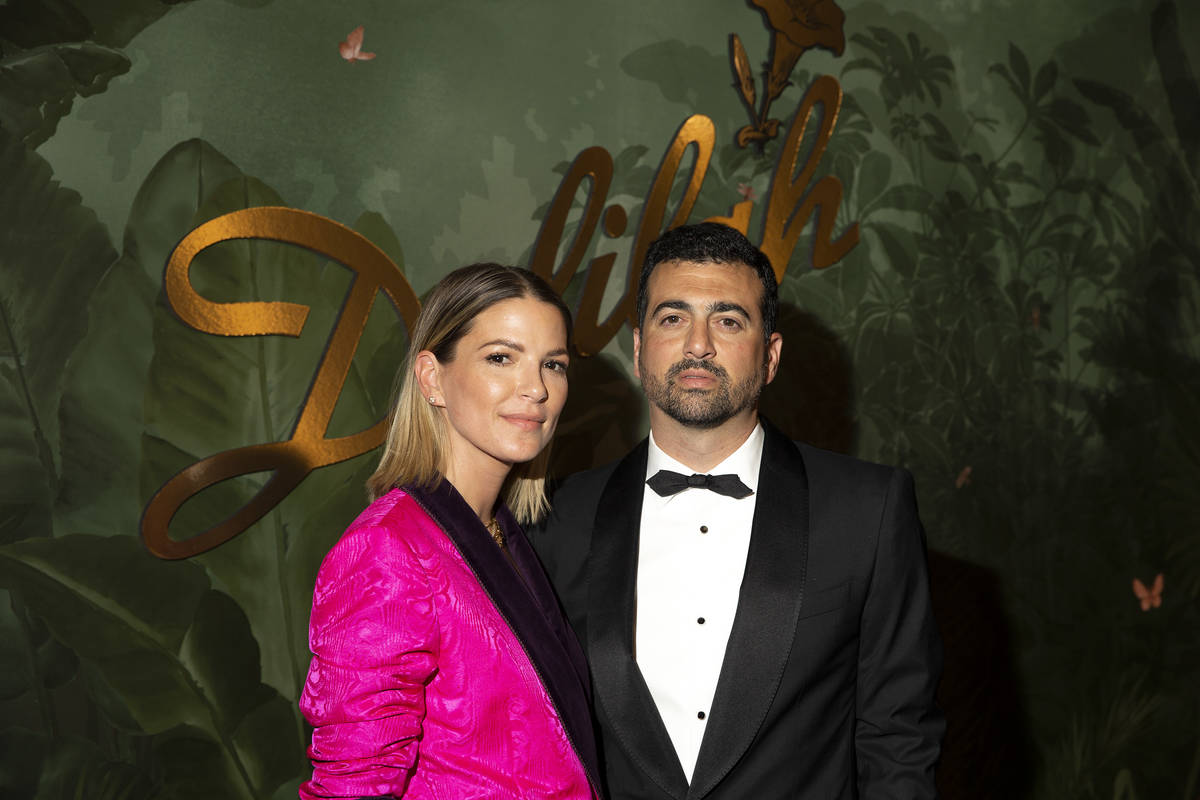 Loni Terzian, left, and John Terzian, an owner of The h.wood Group, pose for photographers upon arrival at the grand opening party of Delilah at Wynn Las Vegas on Saturday, July 10, 2021, in Las Vegas. (Ellen Schmidt/Las Vegas Review-Journal) @ellenschmidttt 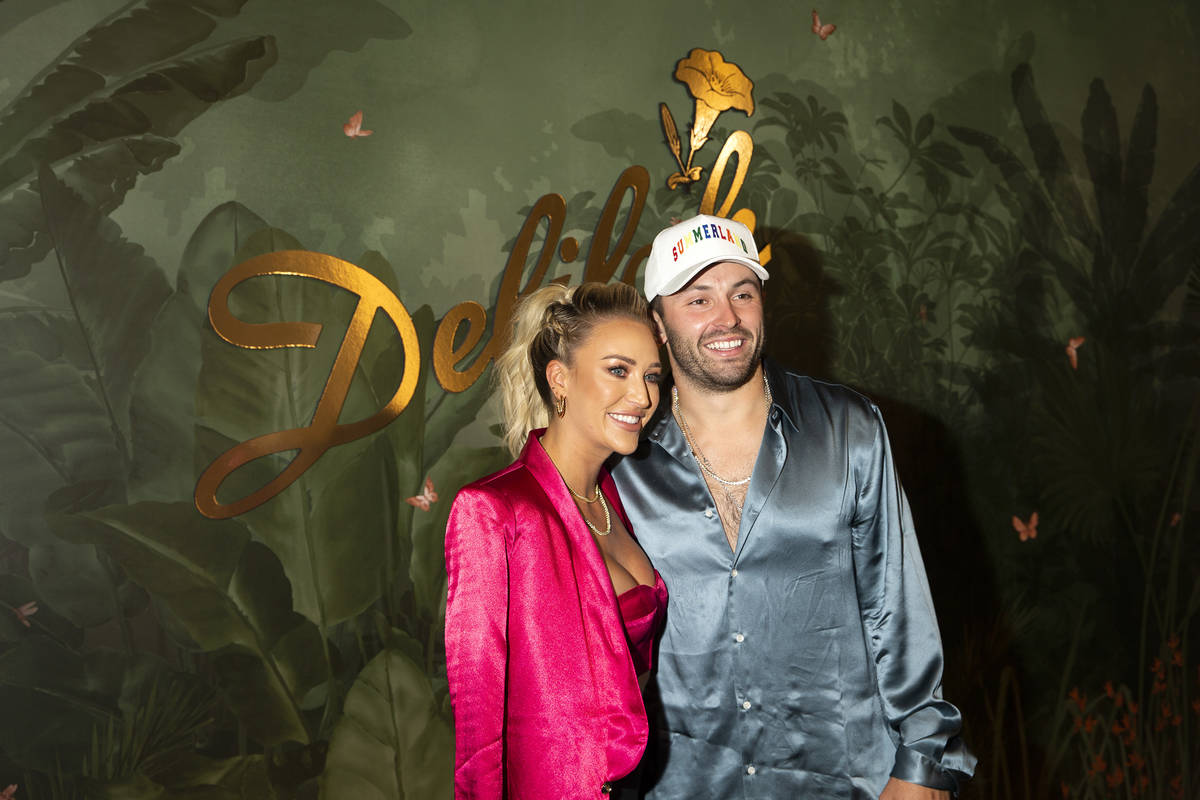 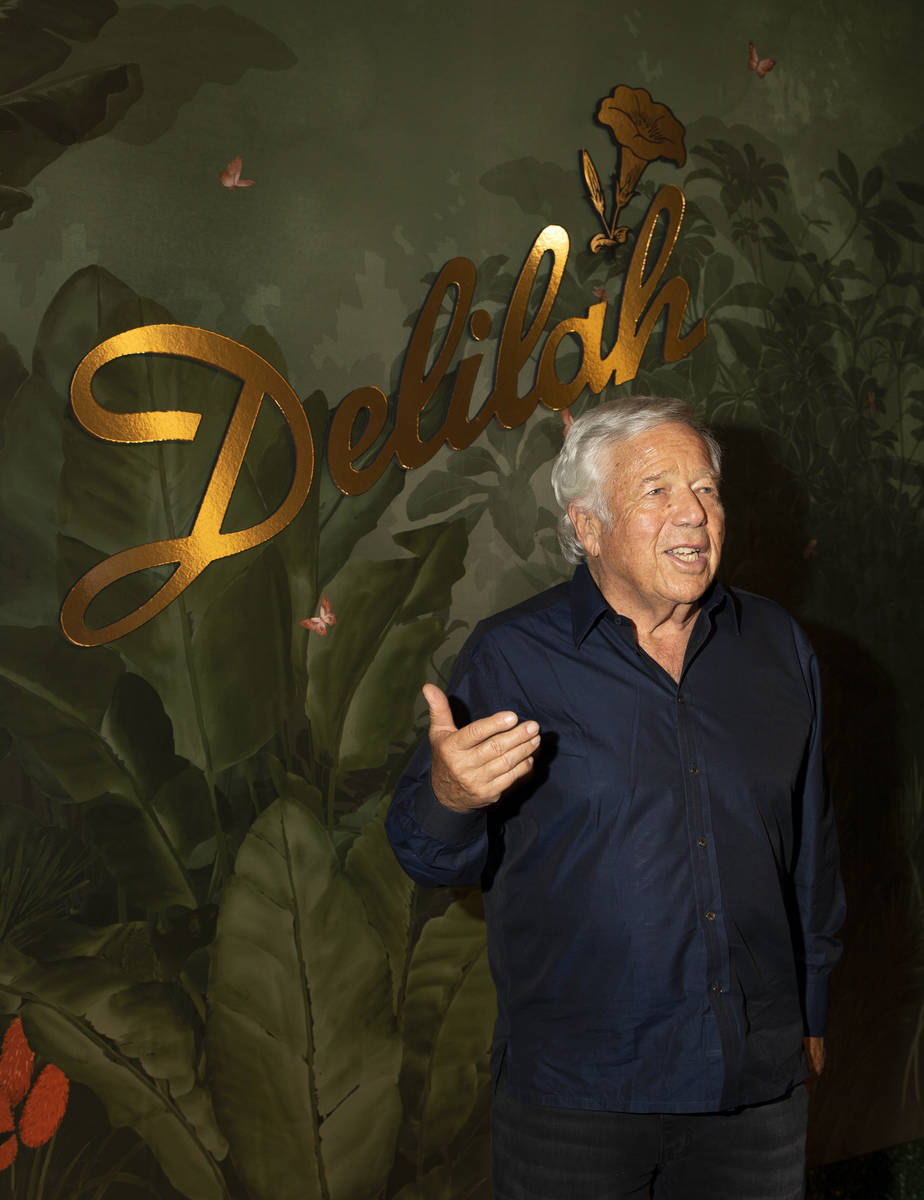 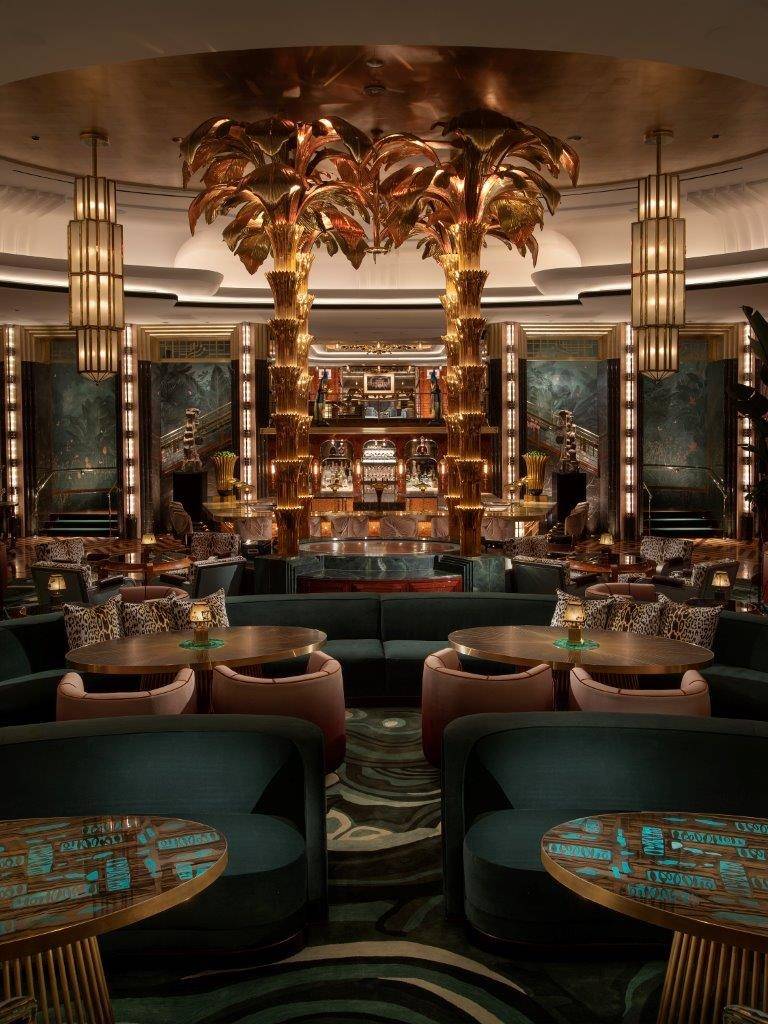 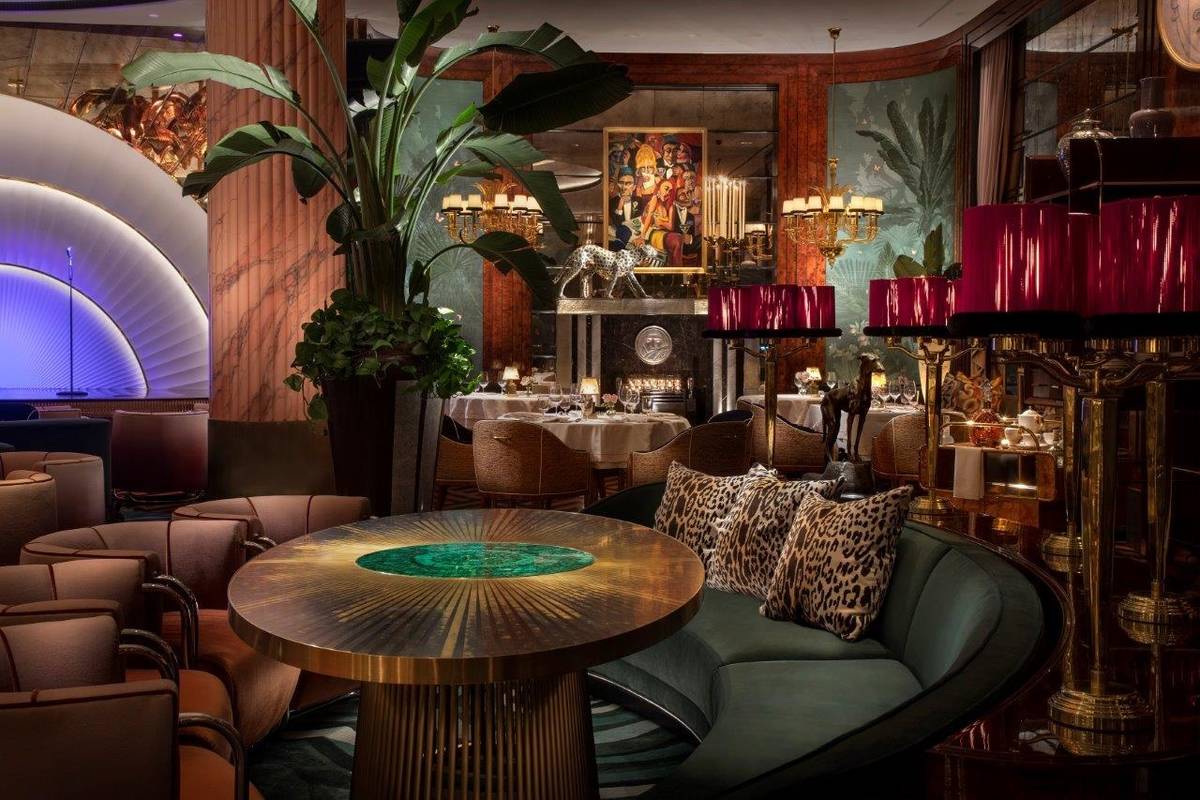 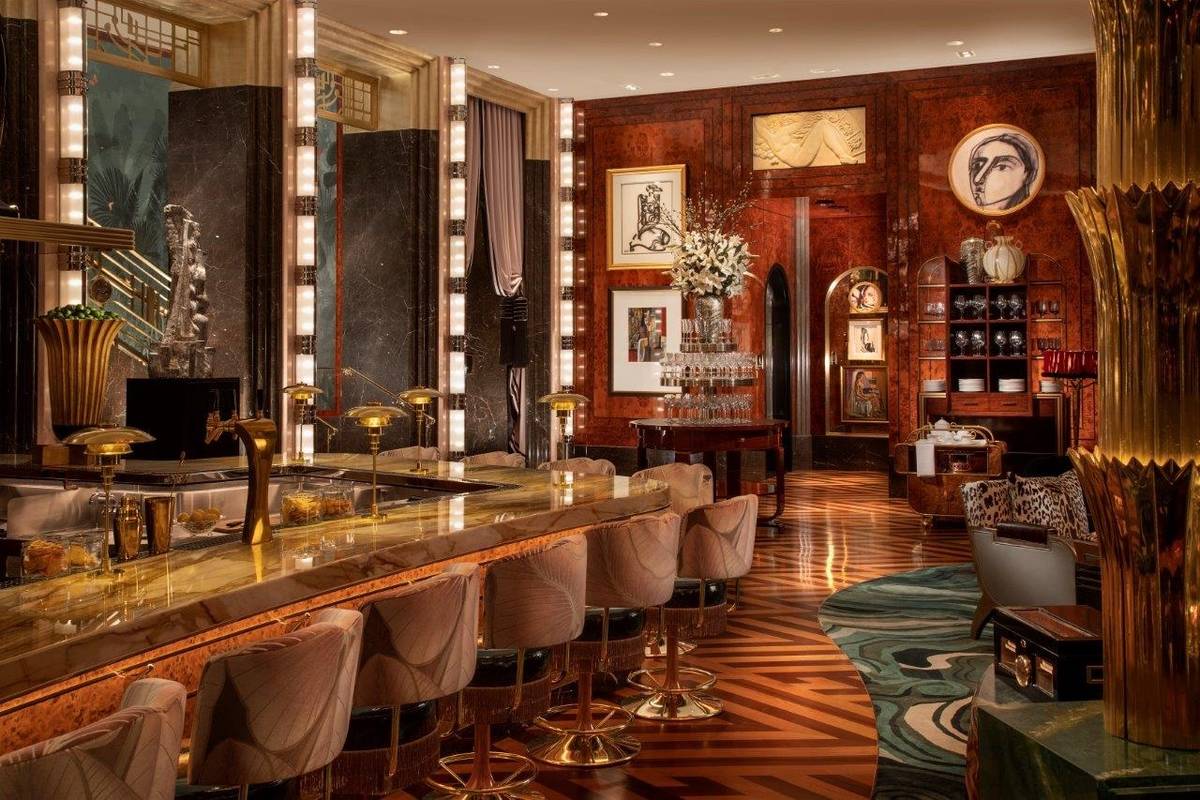 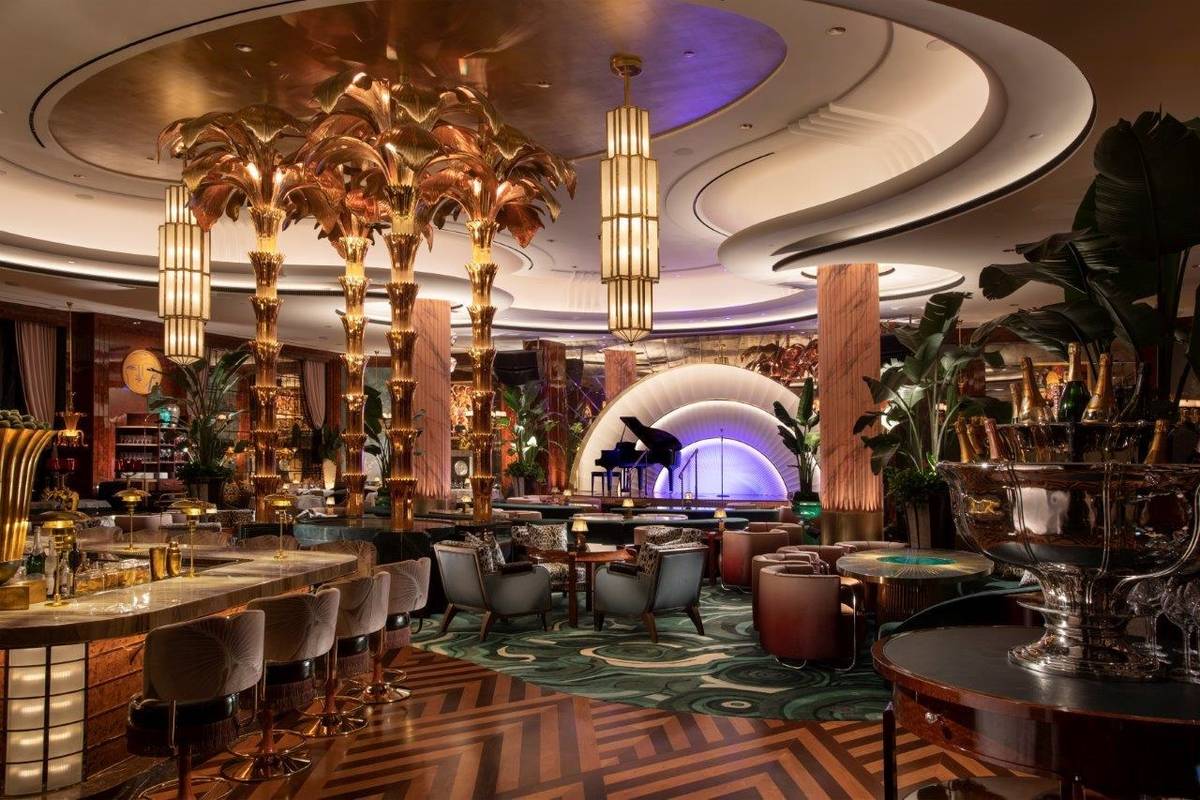 On Thursday, the guests included such luminaries as Elaine Wynn and boxing legend Bob Arum and his wife, Lovee. New England Patriots owner Robert Kraft and Gov. Steve Sisolak and his wife, Kathy Ong, were hanging in the club, too.

Yes, Delilah covered every corner in its preview gala week at Wynn Las Vegas. The space formally opens Wednesday. The series of parties, which began Wednesday, culminated with Bieber’s appearance about midnight Saturday. Wynn and the Arums and a crush of Vegas dignitaries were at a smashing walk-around two nights earlier, when Andra Day (who played the title role in “The United States V. Billie Holiday”) headlined. Vegas fave Savannah Lynx performed ahead of Day.

We have to concede, Delilah exceeded the advance buzz that had blossomed in the months leading to its opening. A Vegas entertainer who was in attendance on Wednesday said simply it was the nicest space this person, a worldwide performer, had ever seen.

What? I responded that maybe this person had been cooped up too long.

Not so. Delilah is bathed in 1920s refinery. You could spot a single fingerprint on a handrail at 50 paces in this place. But Wynn Design and Development Chief Creative Officer Todd-Avery Lenahan didn’t scour Hollywood (home of the original Delilah) for these opulent creations.

Nor did he review such swanky Strip supper clubs as the late Rose. Rabbit. Lie. at The Cosmopolitan of Las Vegas or Mayfair Supper Club at Bellagio.

For Delilah, Lenahan dreamed up the club’s layout during a southern African safari. The next great Vegas nightlife destination was conceived over 3 1/2-week retreat in the Okavango Delta of Botswana in fall 2019.

“That entire venue was designed by me, on quarter-inch-scaled graph paper, while I was in a tent for three weeks,” Lenahan says. “So a lot of times when I need to design something that is a really immersive storyline and needs to be really imaginative, I need to remove myself from my surroundings to create something with a completely new voice.”

Lenahan went on safari in the evening and holed up in the tent when the wilderness became hot.

“I just drew and drew and drew, nonstop, every square inch of it,” the design visionary says. “That’s why you see so many of the actual wildlife references, the cheetah on the chair, the cougar on the fireplace mantle, the monkey on the bar. Where I was, there were monkeys everywhere. They were continually trying to steal my food while I was drawing and were throwing sea pods at me.

“We had leopards under the floorboards in one of our tents, so we have a leopard on the fireplace mantle, inspired by that.”

As we say in VegasVille, it’s a jungle out there. A Sunday jazz night debuts next weekend. Not sure which safari effect inspired that showcase, but we’re eager to hit that cool hang. Find us near the cougar.

Veteran Vegas showman Jeff Beacher pulled a check from his wallet Sunday afternoon, issued by Wynn Las Vegas in the amount of $600,000. He reports he had another $50,000 waiting for him at the hotel. All of this from his latest blackjack foray, over the weekend, which ended Saturday afternoon (he needed to be pulled away from the tables to make the Dave Chappelle/Joe Rogan/Tom Segura show at MGM Grand Garden on Saturday night).

Beacher plays $15,000 per hand, sometimes up to $25,000, and occasionally multiple hands at a time. Some skeptics claim his recent hot streak, including a $710,000 score during the opening weekend at Resorts World Las Vegas, is just a lotta Beach-fashioned hooey.

I’ll just say, in the Resorts World haul, Beacher didn’t even want to initially comment after I heard about this fifth-hand information two days after it happened. We knew he had a great night and had Usher at his side for much of that torrid run. And I seriously doubt Beacher would fashion a Wynn Las Vegas payout check (in the style of Frank Abagnale), given his solid high-roller status with the hotel. But with Beach, anything is possible. We’ll take him at his word, and let it ride.

Terry Bradshaw’s dates at Luxor’s Atrium Showroom are official. The NFL great, reality-TV show star and song-and-dance man opens Sept. 9 and performs 22 dates through Dec. 26. That run includes every Sunday aside from the first two weekends in November.

The schedule matches most of the NFL schedule, on purpose, so fans can match Bradshaw’s shows with dates at Allegiant Stadium. The Raiders home games kick off at 1:05 or 1:30 p.m. typically. Bradshaw arrives (hopefully in his Freddie Mercury long-tailed coat) at 7:30.

We hope the show makes it to Broadway some day, if only so we can refer to Bradshaw as “Broadway Terry.” Make it happen, superstar.