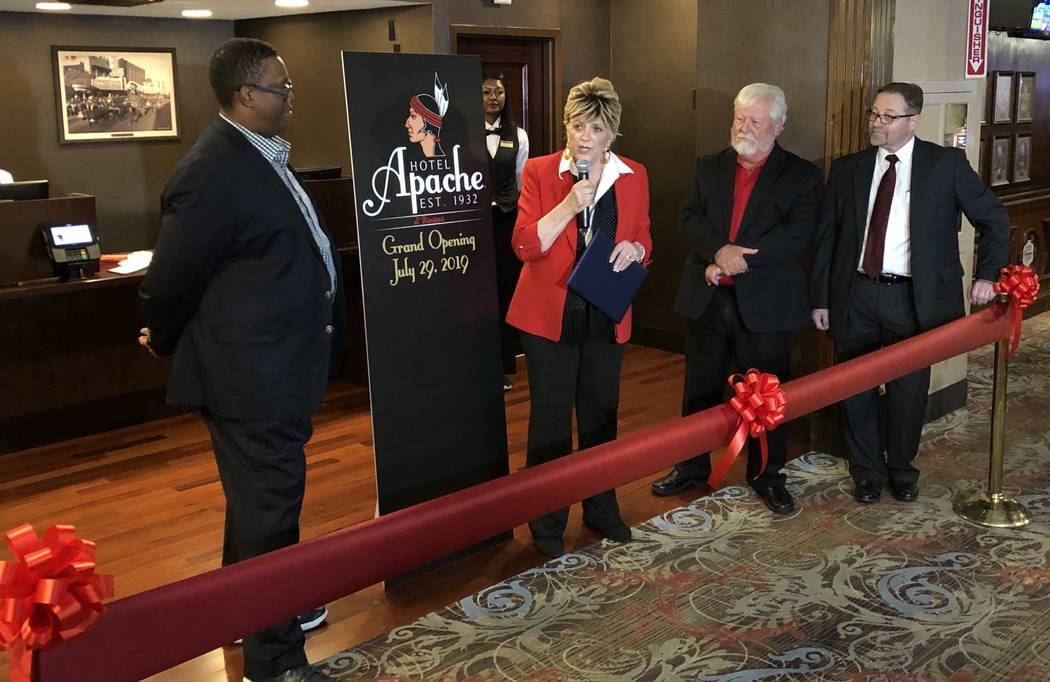 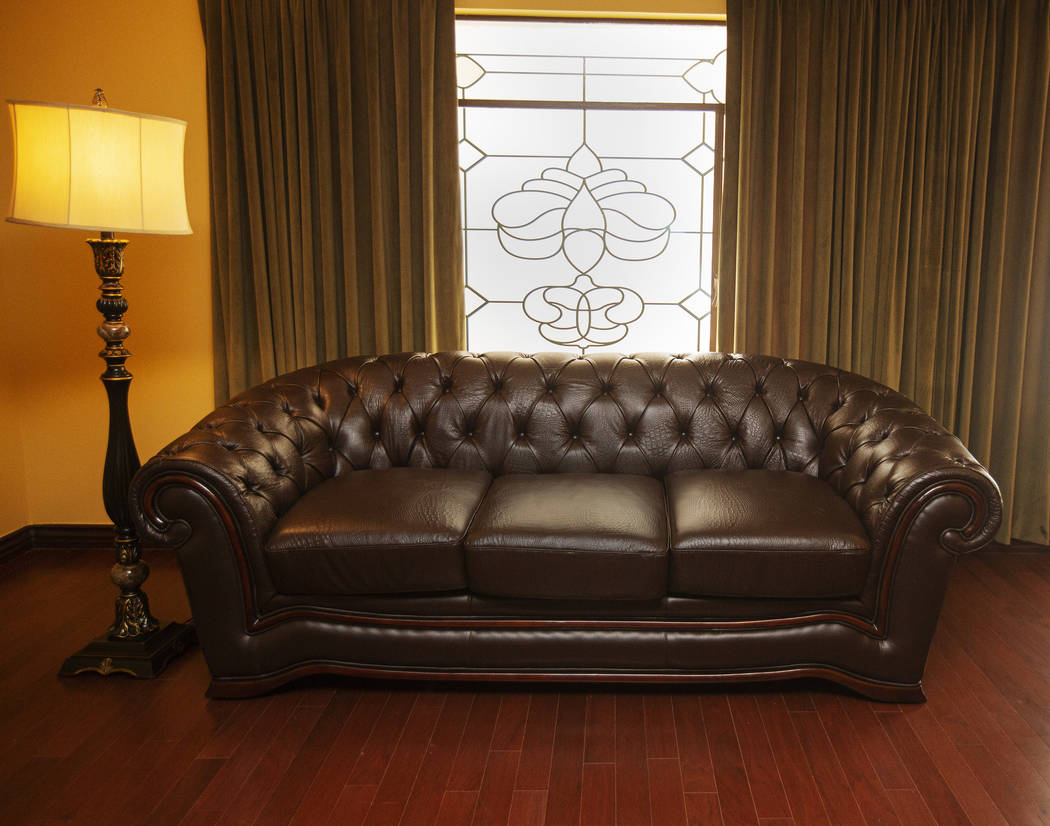 A remodeled lamp and couch of a guest room of the historic Hotel Apache at Binion's Gambling Hall on July 29, 2019 in Las Vegas. TLC Casino Enterprises opened 81 historically-themed rooms as Hotel Apache, the original hotel was built in 1932. (Michael Blackshire/Las Vegas Review-Journal) 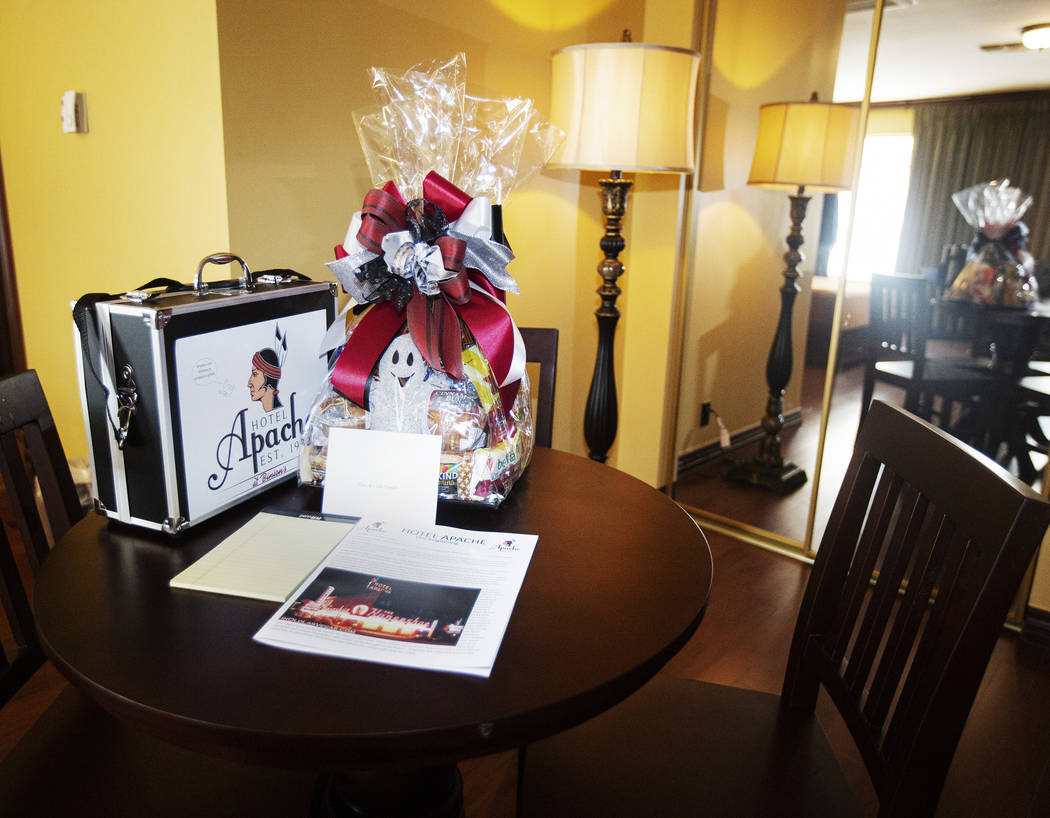 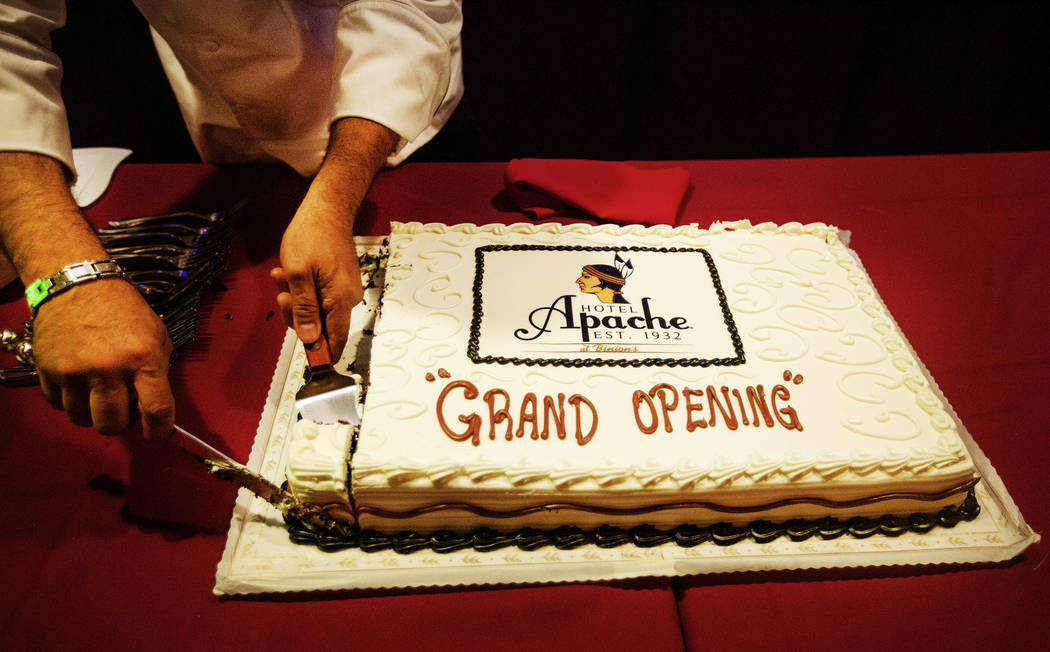 A piece of cake is cut celebrating the grand opening of the Hotel Apache at Binion's on July 29, 2019 in Las Vegas. TLC Casino Enterprises opened 81 historically-themed rooms as Hotel Apache. The original hotel was built in 1932. (Michael Blackshire/Las Vegas Review-Journal)

It was nearly 10 years ago that Tim Lager fought the perception that Binon’s Gambling Hall was closing for good on Fremont Street, though its famed casino, Top of Binion’s steak house and Binion’s Cafe (home of the $5.99 burger special) were to remain open.

Such errant assumptions arise when you lock up all the guest rooms.

So forgive Lager for his unshakable smile Monday afternoon as he helped cut the ribbon on the opening of 81 rooms at Hotel Apache.

“This is a big deal for us, a really important step for us to get the property back to where we want it to go,” Lager, the hotel’s GM, said after he joined Ward 5 City Councilman Cedric Crear, Mayor Carolyn Goodman, and TLC Casino Enterprises owner and president Terry Caudill at the Hotel Apache event.

Caudill’s company owns the hotel-casino. Hotel Apache itself dates to 1932, a time when Model Ts parked outside the property and guests were titillated to ride the first electric elevator ever in Las Vegas.

The new guest rooms offer old-fashioned effects — a rotary phone is a fine conversation piece on any staycation — and a hint to Binion’s pragmatic plans for future development. The next project to open is Whiskey Licker Up, a saloon, restaurant and nightspot, tentatively planned to open by September.

“We are open to the front of Fremont Street with a rotating bar over our existing patio and over 1st Street Stage,” Lager said, referring to the no-cover, live-entertainment zone that faces to Fremont Street. “We’ll have a full kitchen, everything made from scratch and nothing frozen. We will have a very cool destination for downtown.”

After the saloon launches, the hotel’s management will review cash flow and move prudently to refresh and expand. Lager remembers very well the months after his company purchased the property in March 2008, when the Great Recession undercut grandiose renovation concepts and forced the closing of its 365-room hotel tower.

“We need our current projects to get up and running, see the success of those to give us more confidence moving forward,” Lager said. “We’re here to protect this property and and see it grow. It might mean that it grows in small steps, and if that’s the case we’ll go the safer way rather than take a risk.”

Indicative of this measured approach is the hotel’s headliner, comedy hypnotist Kevin Lepine, who logged 16-hour days to make his cozy showroom worthy of a visit by hotel officials. That happened Monday, too.

Out on Fremont Street, Lager is encouraged by all the construction in his neighborhood, on the new Fremont Street Experience Viva Vision LED screen and at mega-resort Circa, on the corner of Fremont and Main streets. Both are scheduled to be open by the end of 2020.

Conceivably, visitors to either or both might want to flop at an antique-styled hotel room at the legendary Binion’s Gambling Hall.

“Right now, everything is looking strong — look at all the cranes and construction down here,” Lager said. “Things are just going up and up, and Circa should be phenomenal for us. What (hotel co-owners) Greg and Derek Stevens have done for downtown is fantastic. But we also want to be very cautious, and keep ourselves in a good position for the future.”