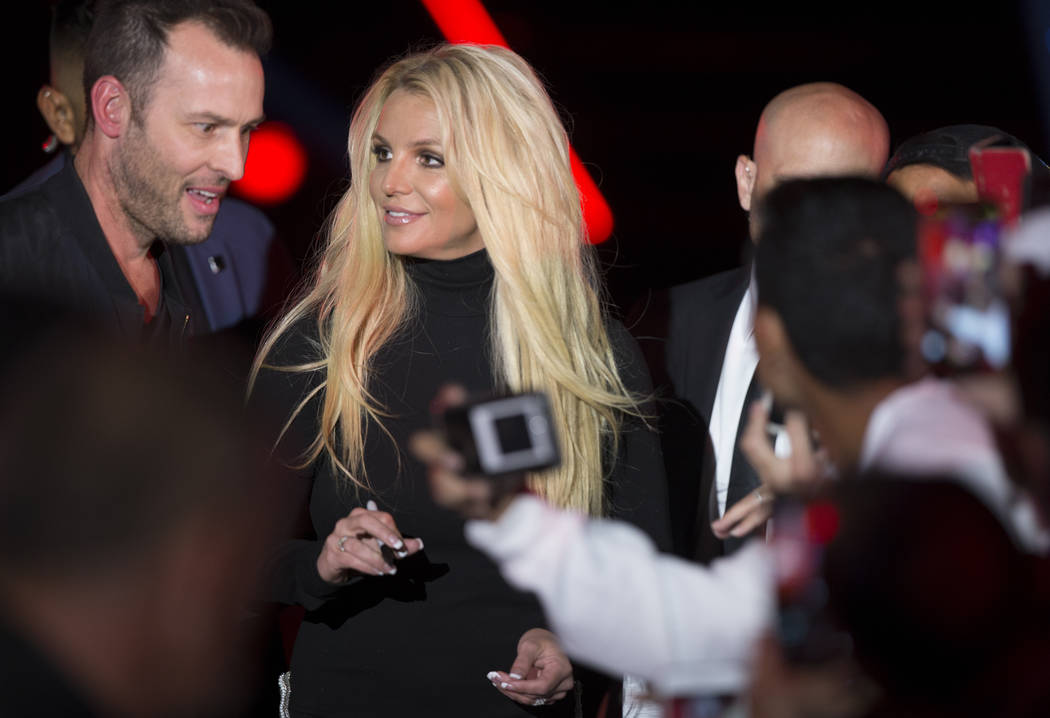 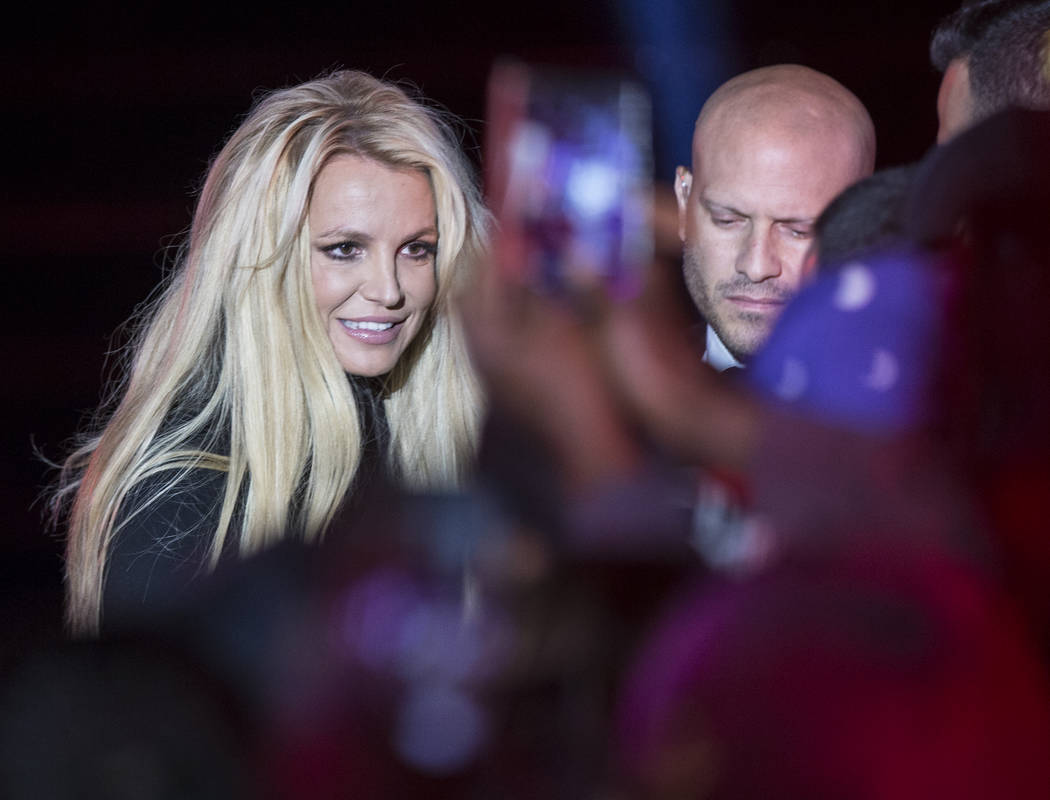 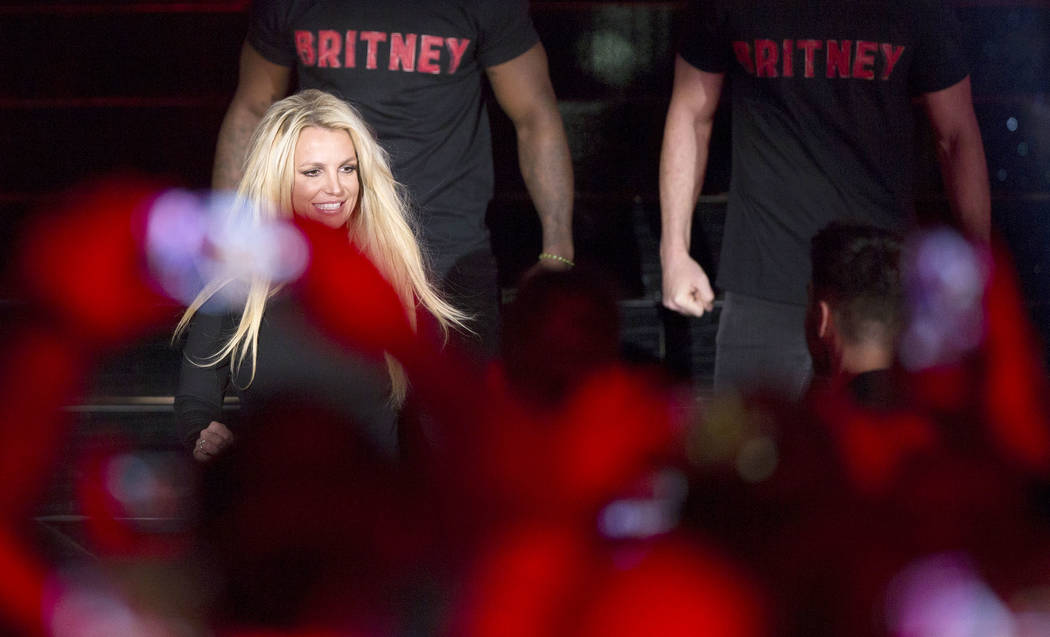 Britney Spears signs autographs during an event to announce her new residency at The Park Theater at Park MGM on Thursday, Oct. 18, 2018, outside T-Mobile Arena, in Las Vegas. Benjamin Hager Las Vegas Review-Journal

For someone out of the news, Britney Spears makes a lotta news.

Her career is currently idle as she is treated in a mental-health facility to cope with the serious illness od her father, Jamie Spears. But Spears is now at the center of reports, including from the New York Post’s Page Six, interpreting her mother’s cryptic social-media posts.

Lynne Spears posted a photo on her personal Instagram account Tuesday of a woman kneeling, along with the text in the photo, “When God’s warriors go down on their knees, the battle is not over; it has just begun.”

Spears also posted the caption: “This is ‘Faith!’ ”

Spears’ mom also “liked” a comment from a fan calling for Britney to end her decadelong conservatorship, which has been managed by her father since Spears’ earlier mental-health concerns in 2008 (Lynne and Jamie Spears divorced in 2002). The comment read, “I really hope you are supporting Britney in trying to end this conservatorship. I really hope your ailing ex-husband isn’t keeping your daughter somewhere against her will.”

Her father was also seen at a party on March 10th in perfect health and he reportedly lied about his disease to cancel her residency. #FREEBRITNEY pic.twitter.com/CVsuon2cgr

Lynne Spears also liked the comment in her Instagram post, “I hope she’s doing OK & can finally be able to (be) free she deserves it!! We know.”

A conservatorship, or guardianship in some jurisdictions, is ordered by the courts for adults who lack the capacity to make their own life and career decisions.

Spears’ Las Vegas manager Larry Rudolph manages the entertainment facets of her career and is not directly involved in the conservatorship or the 37-year-old performer’s health concerns. He offered no comment about the recent reports of the apparent family dispute or her ongoing hospitalization.

Many of Spears’ fans, who are particularly ardent, have been tweeting that Spears was committed without her consent and using Lynne Spears’ own “likes” as verification. The hashtag #FreeBritney has surfaced on Twitter and Instagram. The phrase fits neatly on T-shirts, too.

Jamie Spears, who has been hospitalized and undergone two surgeries to repair a ruptured colon, continues to control his daughter’s conservatorship. Los Angeles probate attorney Andrew Wallet, who had been Spears’ original co-conservator, recently stepped down.

That move left Spears’ ailing father as the lone decision-maker in the most relevant facets of her life and career. Court records show Spears is worth about $56.5 million, according to her 2018 earnings.

Thus, the responsibility of running the Spears empire is enormous. An example of her father’s authority: Spears is in a long-term relationship with her boyfriend, Sam Asghari, and the two would need Jamie Spears’ consent to get married as long as the conservatorship is in place.

Spears’ father and Wallet stepped in when she was diagnosed with bi-polar disorder in 2008, after a series of erratic events (including shaving her head and attacking a photographer’s car with an umbrella). Spears has revived her career under that arrangement — and Rudolph’s management strategy — leading to her “Piece of Me” residency at Zappos Theater from 2013-2017.

The show amassed a reported $138 million over its four-year run and helped ignite similarly scaled headliner residencies on the Strip by Jennifer Lopez, Gwen Stefani and Lady Gaga.

But Spears’ announced “Domination” production at Park Theater, the follow-up to “Piece of Me,” was put on hiatus after the elder Spears’ health crisis was made public (he spent nearly a month hospitalized in Las Vegas after his colon burst).

Spears remains executive producer of the Broadway-bound “Once Upon a One More Time,” a musical featuring many of her hit songs. But none of the recent activity surrounding her health, that of her father, or her conservatorship has moved the pop superstar closer to a return to the stage.

Aerosmith’s legendary front man, Steven Tyler, took in The Beatles’ “Love” at the Mirage on Wednesday night. He’s seen the show about a half-dozen times. Tyler also visited the show’s audio command center beneath the stage, where Giles Martin (who developed the sound bed at Park Theater for “Deuces are Wild”) digitally remastered his father, George’s, original recordings.

Donny Osmond, a social-media wizard, posted a video of a mobile billboard truck passing the Flamingo hotel tower facing the Strip. Both the truck and the hotel’s building wrap displayed images of the Donny & Marie show. His post: “Only In #LasVegas.”

“Saturday Night Live” and Blues Brothers devotees will recognize the sax man in James Taylor’s All-Star Band at the Colosseum at Caesars Palace: “Blue” Lou Marini, who famously said, “Those lights are off on purpose,” in “The Blues Brothers” and played the sax on Steve Martin’s “King Tut” sketch on “SNL.” Marini burst from the crypt, dressed as the boy king, in that memorable moment. … Discussion among members of the Bronx Wanderers about whether to drop the band’s own version of Barry Manilow’s “Copacabana” into the show, just after a spin through Bruno Mars’ “Uptown Funk.” The founding father, Vinny Adinolfi, wants to do it. The younger folk will require some convincing. … “The Atomic Saloon” production company Spiegelworld has posted a YouTube video of female wrestlers auditioning for the show’s upcoming bar-brawl scene. The show opens Sept. 8 at the old Act space at Grand Canal Shoppes at The Venetian.