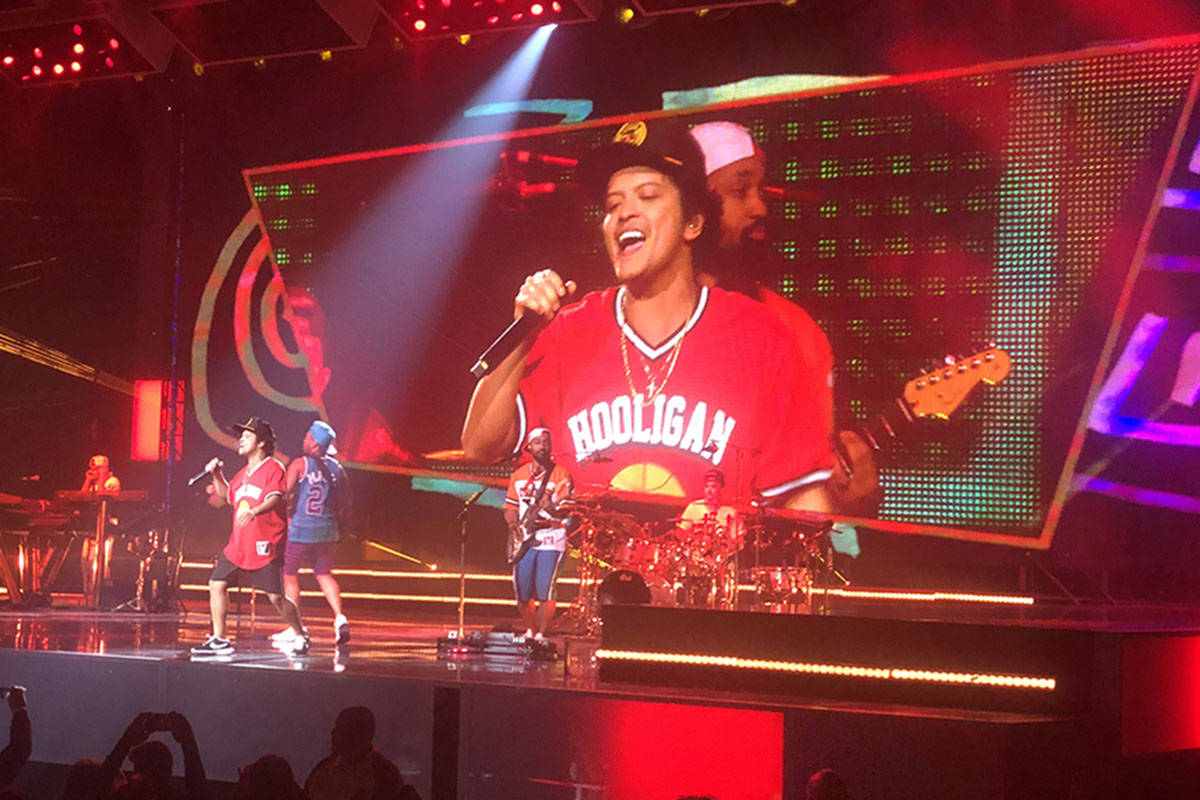 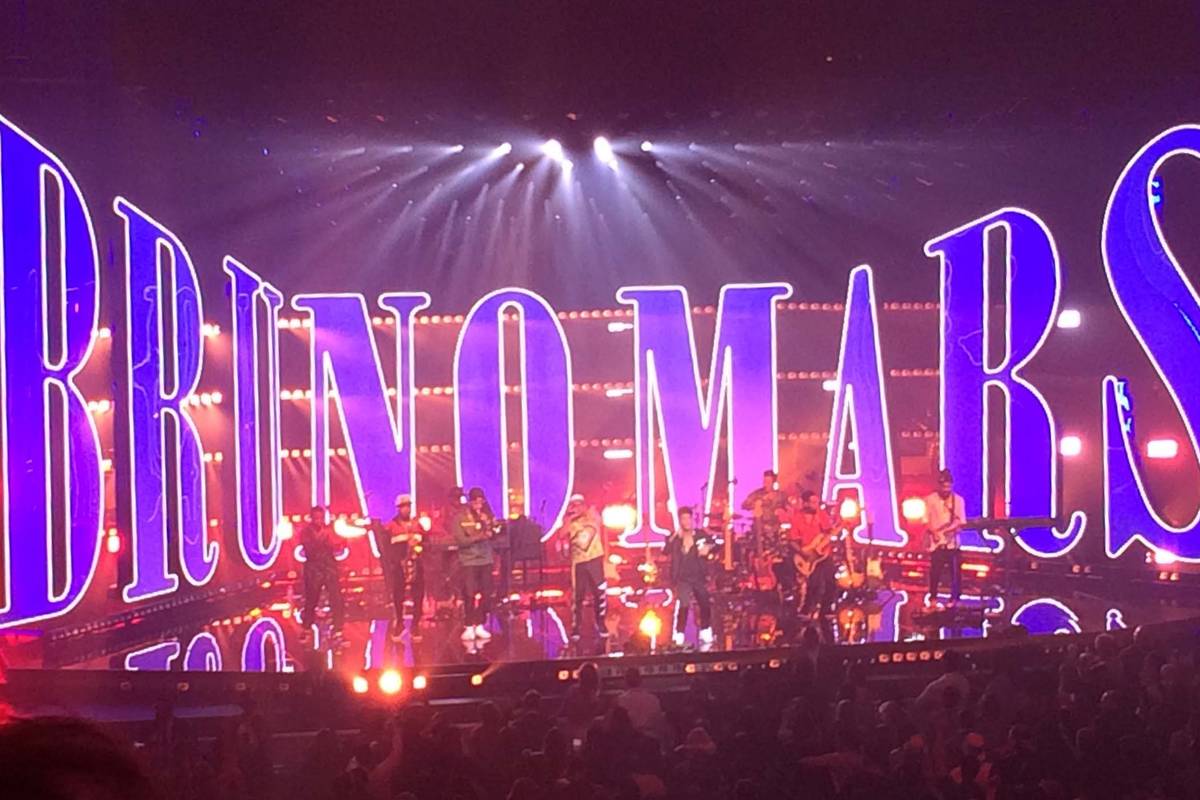 Production flourishes such as a giant sign spelling out Bruno Mars' name never got in the way of his low-tech charms, Saturday, Dec. 31, 2016, at The Park Theater on the Las Vegas Strip. (John Katsilometes/Las Vegas Review-Journal) @johnnykats 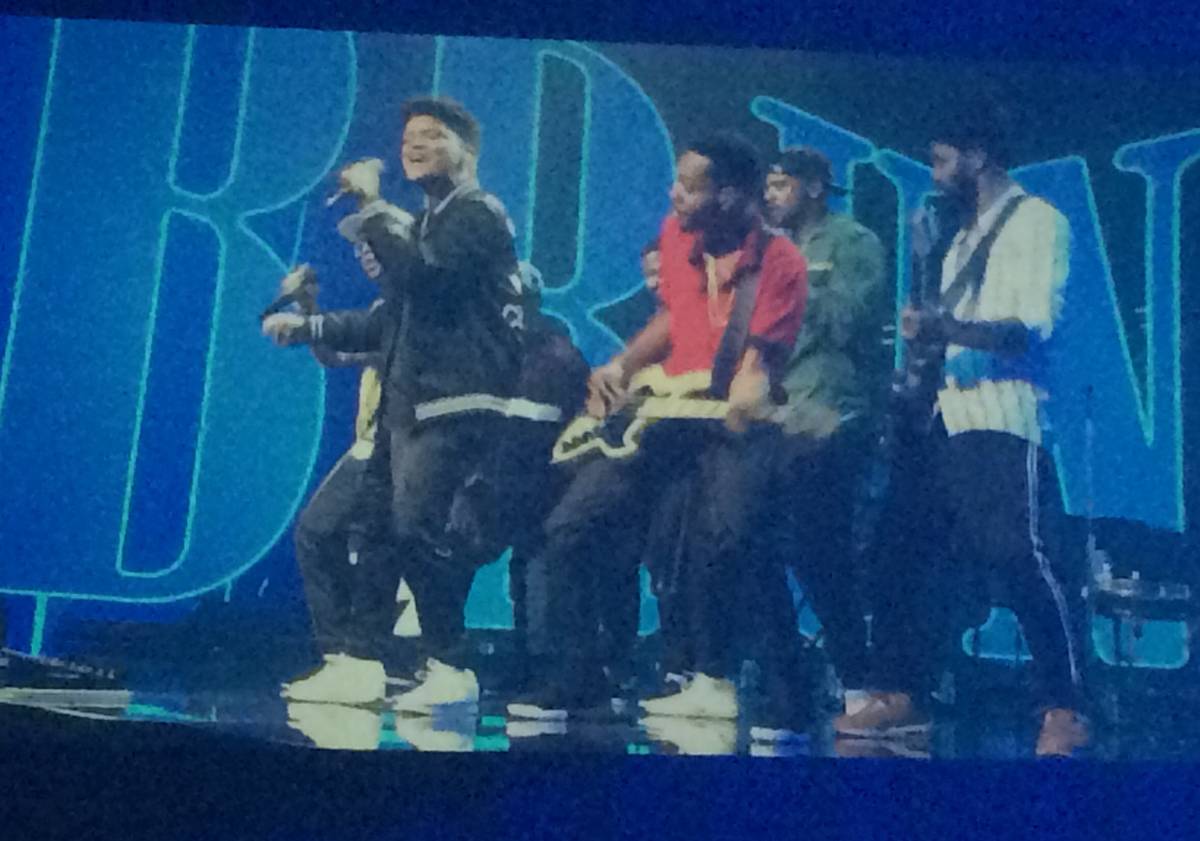 Bruno Mars as seen on the giant video walls of The Park Theater, Saturday, Dec. 31, 2016, on the Las Vegas Strip. 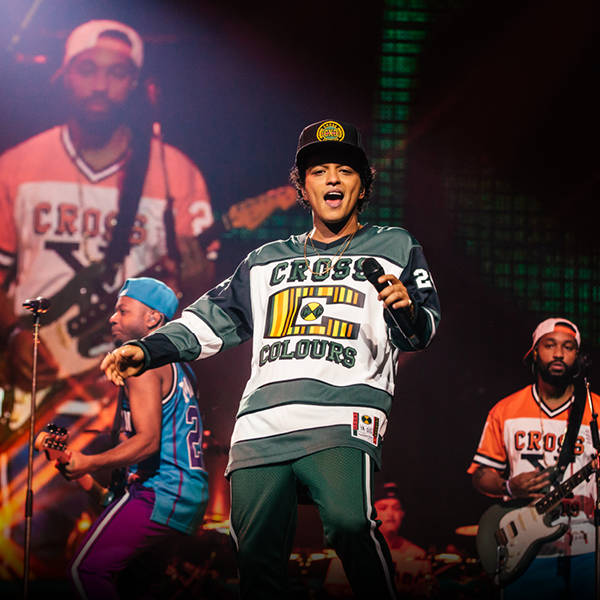 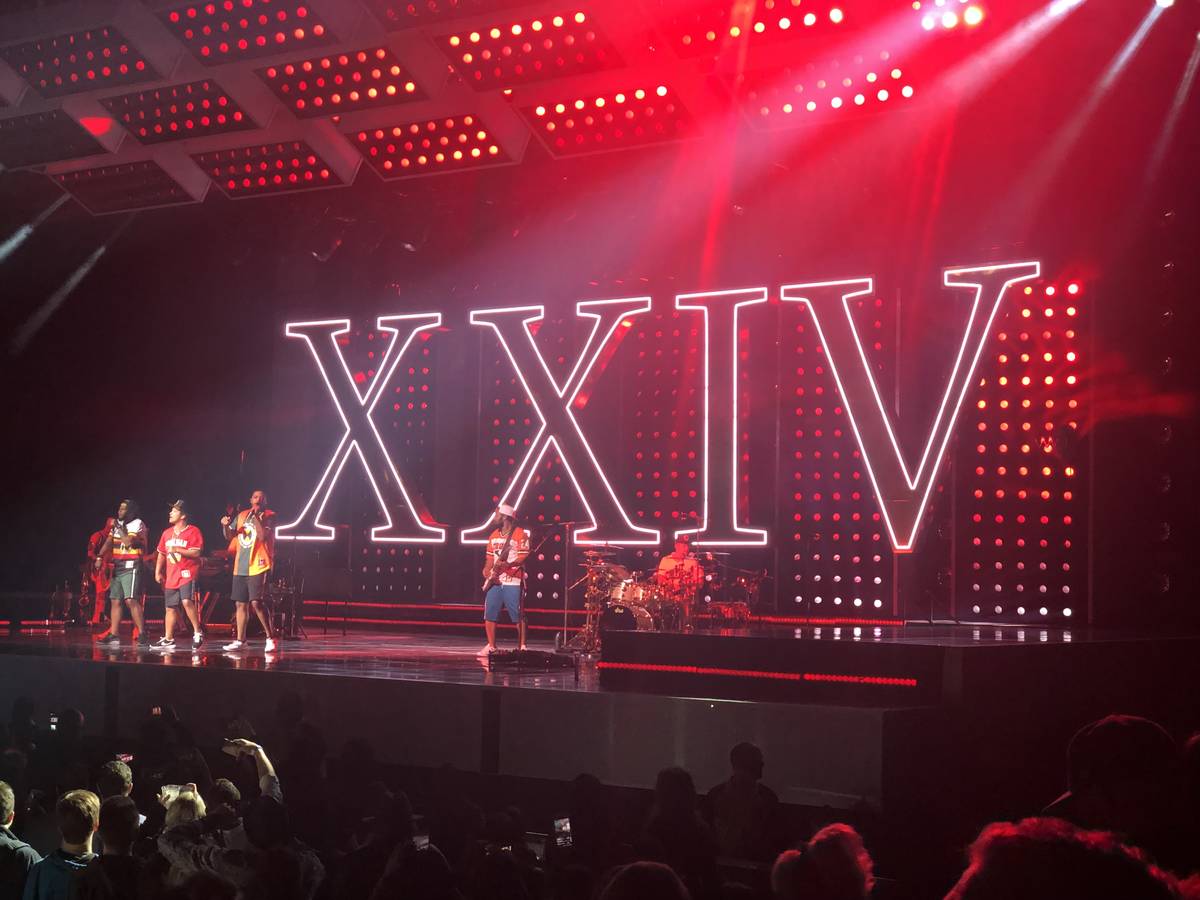 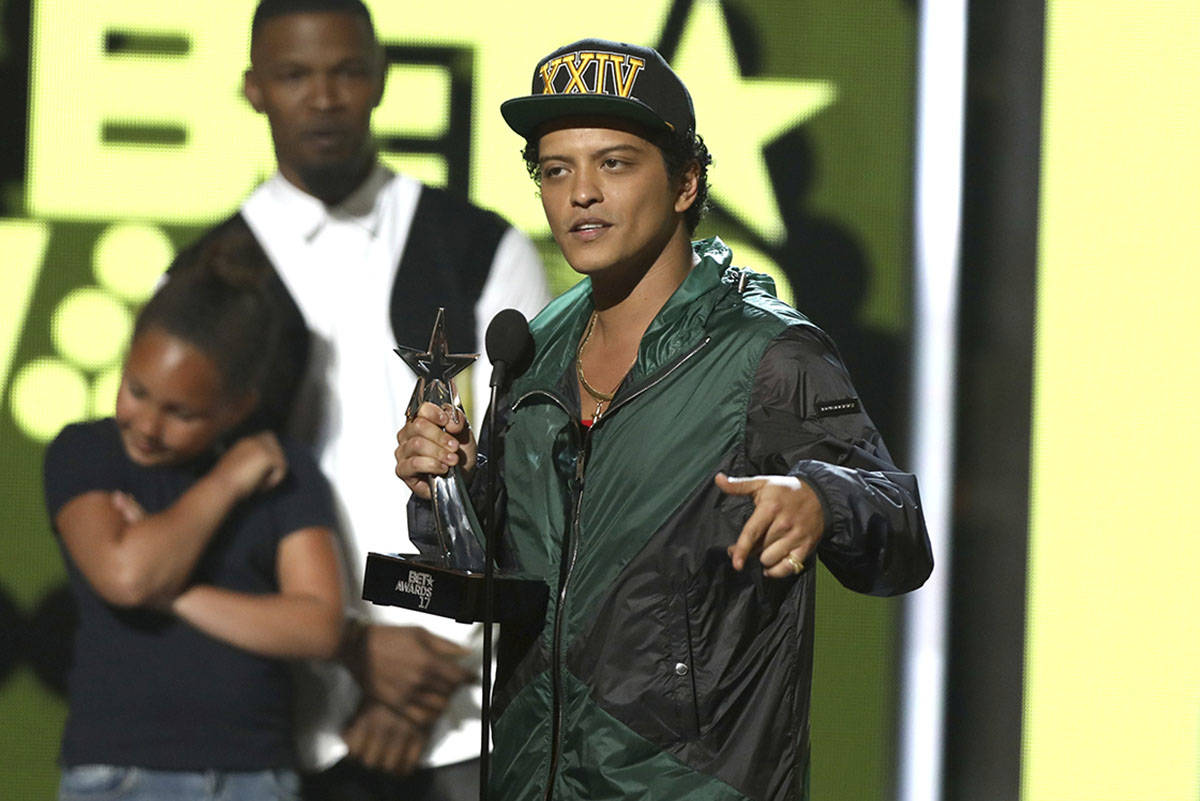 Bruno Mars accepts the award for best male R&B/pop artist at the BET Awards at the Microsoft Theater on Sunday, June 25, 2017, in Los Angeles. (Photo by Matt Sayles/Invision/AP)

Those explosions in Bruno Mars’ stage show always seem to catch you off guard, even when you know they are coming. And Monday morning, the Las Vegas Strip favorite set off another blast, appropriately timed for the July 4 weekend.

Mars has announced his return to Park Theater at Park MGM July 3-4 and July 9, 10, 23, and 24 (tickets start at $99.50, plus fees, and are on sale 10 a.m. Friday at ticketmaster.com). Mars now owns the distinction of being the first resident superstar headliner to return to the stage during the COVID pandemic, prior to Usher’s scheduled opening at the Colosseum at Caesars Palace on July 16.

Mars also is out ahead of Park Theater’s impressive list of resident performers in returning to the stage. It is expected Lady Gaga, Cher and Aerosmith will announce their own relaunching efforts at the theater this year. They won’t be alone, either.

“We expect to be announcing all the previous musical resident headliners are returning to the stage,” MGM Resorts International President of Entertainment and Sports George Kliavkoff said in a phone chat Monday morning. “We look forward to announcing additional headliners as well.”

Park Theater has served as a focal point throughout COVID, for its flexibility for capacity and staging. In February, Kliavkoff said the theater was being reviewed as a possible venue for magician Shin Lim and the “Aces of Comedy” lineup, featuring such star comics as Bill Maher, David Spade, Ray Romano, George Lopez and Daniel Tosh.

But the relaxing of restrictions for public gatherings is allowing those shows to return to Mirage Theater, also on or around the July 4 weekend. Kliavkoff said those residency returns are tied to 100 percent capacity allowances, which are expected in June. The company’s shows that have been displaced for larger venues (such as “Fantasy” and Carrot Top at Luxor Theater and Jabbawockeez at MGM Grand Garden Arena) are soon moving back to their original theaters.

Across the Strip, MGM Resorts is building a schedule that hearkens to the pre-pandemic summer of 2019. Comedy great Dave Chappelle is headlining the Grand Garden Arena with his “Dave Chappelle and Friends” show on July 2, returning July 9 to co-headline with Joe Rogan. Another top comedy draw, Bill Burr, returns live shows to the Chelsea at the Cosmopolitan on July 2-3.

Nearly every sports and entertainment venue is moving to large-scale events. UFC 264, pitting Conor McGregor vs. Dustin Poirier, is set for a full-capacity T-Mobile Arena on July 10. Also on that date is Garth Brooks’ twice-delayed concert at Allegiant Stadium, which has sold out at 65,000. This flurry does not count the Vegas Golden Knights’ home playoff games at T-Mobile, either.

“The first two weeks of July are looking very busy,” Kliavkoff said. “We’re anticipating more announcements to be made, too.”

An electrifying live performer, Mars premiered at Park Theater on New Year’s Eve 2016, the first of the venue’s resident headliners to open after Stevie Nicks and the Pretenders opened the venue two weeks earlier. The Park Theater series actually is Mars’ second residency on the Strip. Mars previously performed 11 shows at the Chelsea at The Cosmopolitan from 2013-2015.

Over the years, Mars and his horn-powered Hooligans backing also have headlined at Pearl Concert Theater at the Palms, MGM Grand Garden Arena and T-Mobile Arena. He was a show-closer at the one and only Vegas installment of Rock in Rio at Las Vegas Festival Grounds in May 2015.

Mars has also again topped the charts. His “Leave The Door Open” Silk Sonic collaboration with Anderson.Paak is No. 1 on the Billboard Hot 100. To put it succinctly, the returning Park Theater superstar is having a great month.