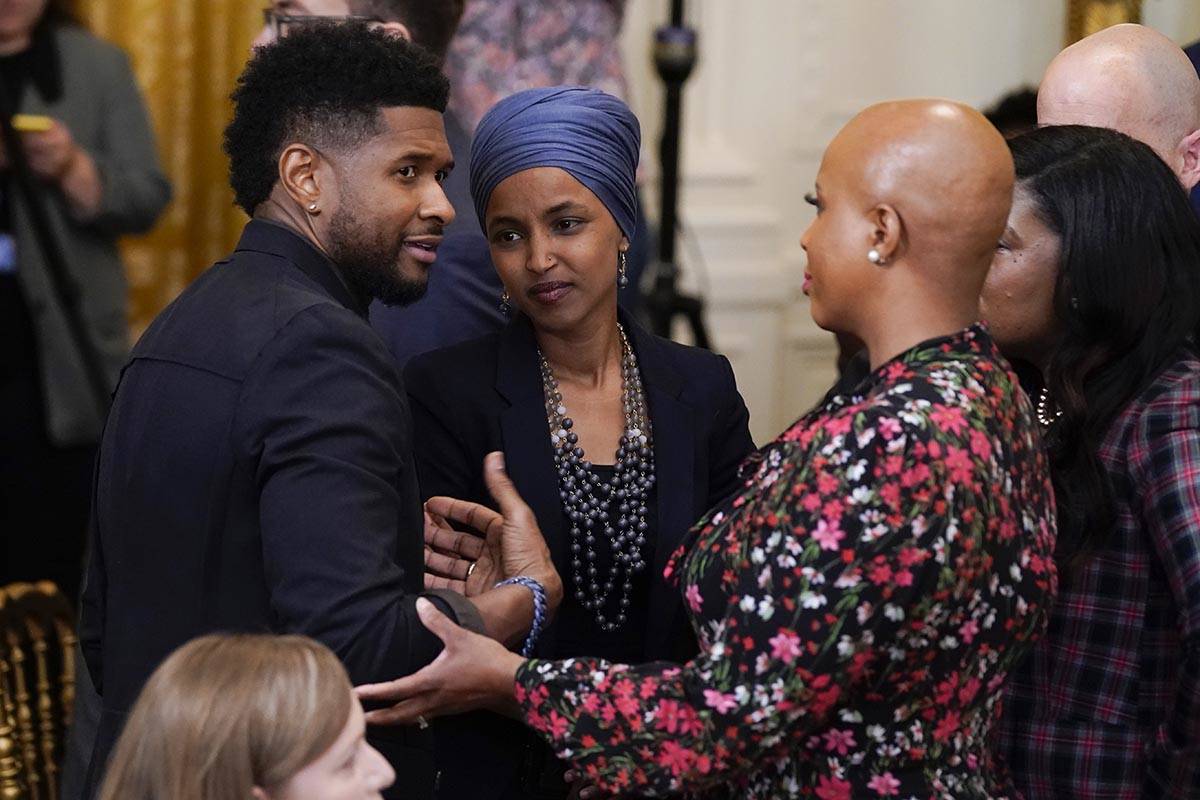 Usher speaks with Rep. Ilhan Omar, D-Minn., second from left, and Rep. Ayanna Pressley, D-Mass., second from right, as they arrive for an event to mark the passage of the Juneteenth National Independence Day Act, in the East Room of the White House, Thursday, June 17, 2021, in Washington. (AP Photo/Evan Vucci) 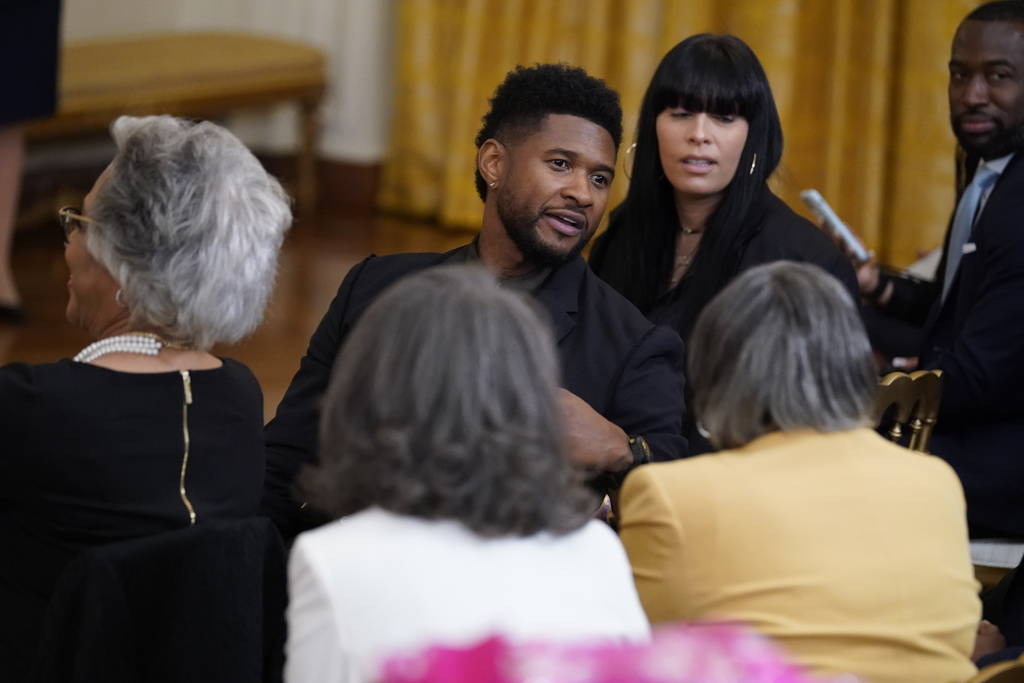 Usher is seated as he arrives for an event to mark the passage of the Juneteenth National Independence Day Act, in the East Room of the White House, Thursday, June 17, 2021, in Washington. (AP Photo/Evan Vucci)

Caesars Entertainment is pushing the “Entertainment” facet of the company name this weekend with the opening of Usher’s show at The Colosseum at Caesars Palace.

The R&B superstar performed a friends-and-family show Wednesday night. Early returns indicate, foremost, the show is really loud. Maybe it’s the time away from the venue, but the sound from the stage and the audience seems ramped up.

Usher’s crowd-pleasing opening scene is a grandiose, Vegas-style dance spectacular. A pole-dance number is said to be “insane.” The headliner also roller skates, in impressive choreography, along with two backing dancers.

The number summons the inspired, rolling routines from “Starlight Express” at Las Vegas Hilton and (more recently) “Absinthe” at Caesars, “V — The Ultimate Variety Show” at V Theater at Miracle Mile Shops, and Elyzabeth Diaga’s Blondie medley in “Queens of Rock” at Mosaic on the Strip.

Usher’s rescheduled residency has been eagerly anticipated across the city, especially among Caesars Entertainment officials. The Colosseum has of course been latent throughout COVID while shuffling its resident headlining productions. Usher, Morrissey, Keith Urban, Rod Stewart and Sting are all announced for this year. We expect that Reba McEntire and Brooks & Dunn are planning to be back in late November or early December to line up with the National Finals Rodeo.

The conditions remain uncertain, naturally, with COVID cases on the rise in Clark County. But the call for tickets to the Usher series is inarguable.

“The remarkable demand at the box office that we are seeing for Usher’s shows is a true testament to his star power,” Caesars Entertainment President of Entertainment Jason Gastwirth says. “The demand is expanding even beyond the rebound Vegas is experiencing right now coming out of the pandemic.”

Usher’s shows arrive as Caesars regains its balance after knocking out several live entertainment venues in May, cutting several small-capacity shows. But the company counters that it is still home to several big-name performers and production shows.

Among the ticketed shows currently onstage or scheduled to be are “Absinthe” at Caesars Palace; Donny Osmond, “Menopause the Musical,” “X Country,” and Tape Face at Harrah’s; Mat Franco at Linq Hotel; “Extravaganza,” “Paranormal” starring Frederic Da Silva and “Potted Potter” at Bally’s; Criss Angel at Planet Hollywood; Piff the Magic Dragon, “X Burlesque” and “Ru Paul’s Drag Race Live” at Flamingo; and Penn & Teller, the Comedy Cellar and “Wow” at the Rio.

That does not include Wayne Newton’s return to the stage (we anticipate a move to Bugsy’s Cabaret at Flamingo), or what might finally animate Paris Theater, a beautiful venue that has nonetheless sat dark since December 2018 (we keep hearing an “Enter the Dragon” stage show). Also, the company reports that Jimmy Kimmel’s Comedy Club at Linq Promenade will be back.

And guess where you can catch some vintage-Las Vegas entertainment: Circus Maximus Theater in Atlantic City. “Friends! The Musical Parody” opens the “Vegas Boardwalk Live” series Aug. 2. Bronx Wanderers (who are headed to a residency at Westgate Las Vegas, as it happens) are booked Aug. 8-9, hypnotist Anthony Cools is Aug. 22-23 and Tenors of Rock are Aug. 29-30.

All of those shows have been closed in Vegas, yet are being billed as “beloved acts that have played the legendary Las Vegas Strip.” For more Vegas flair, Circus Maximus was the name of the regal theater at Caesars Palace that pre-dated The Colosseum. That’s closed, too. We have not been to Atlantic City or its Boardwalk, and it seems time for a road trip. We’ll even pack the skates.

We got the Point

Earl Turner, the peerless showman who dates to the days of the Dunes, is back at South Point Showroom on Aug. 6-7. It’s Turner’s first appearance at South Point since 2017. Turner allows two types of dancing. Seated and otherwise.

Aerosmith will be back at what is Park Theater at MGM Grand (until it is renamed Dolby Theater anytime now), not this year but certainly next. Of this, we are confident.

Producers of the Netflix documentary series “Heist” are offering visitors to Fremont Street Experience this weekend the chance to pick up a bag containing $3.1 million and have their photos taken inside a Loomis armored truck. “Heist” is based on the infamous 1993 armored car robbery at Circus Circus, committed by the criminal couple Roberto Solis and Heather Tallchief. The duo made off with the cash and were at-large criminals until Tallchief turned herself into Las Vegas authorities in 2005.

The display at FSE runs from 2 p.m.-1 a.m. Friday through Sunday. The series’ trailer will run on the Viva Vision LED display. It’s all free, and leave the money. It’s not for you.

Noybel Gorgoy, who has joined the likes of Paul Shaffer, Clint Holmes and David Perrico’s Pop Strings (including the band’s empty-nest show at Allegiant Stadium last month) finishes her two-night run at The Nevada Room at Commercial Center on Friday. Doors at 6 p.m., show at 8 p.m. No cover. Order dinner and drinks off the menu.