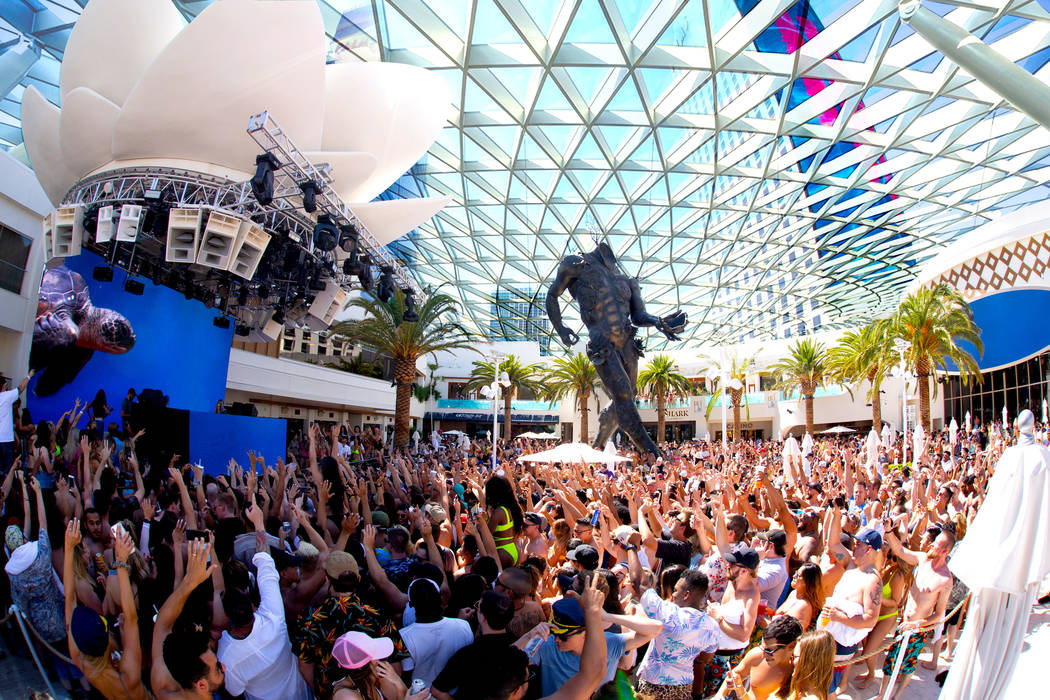 A rendering of the new Kaos Dome at Kaos Nightclub and Dayclub. (Palms) 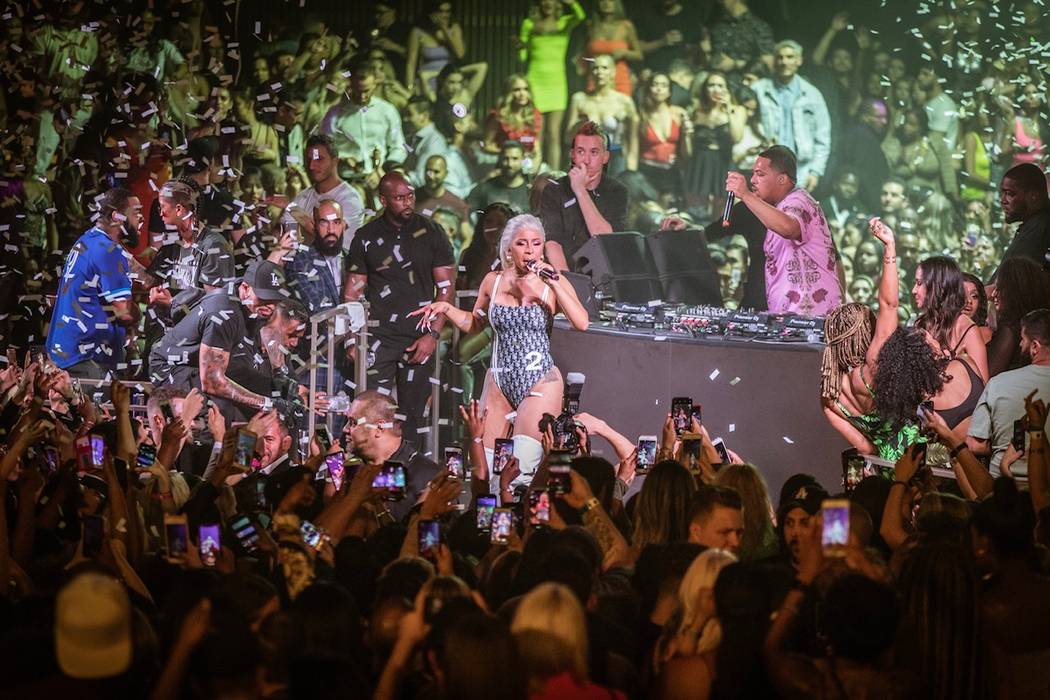 Cardi B performs at Kaos Dayclub and Nightclub at the Palms on Saturday, June 15, 2019. (Tony Tran)

Cardi B will not be performing topless again this year at Kaos Nightclub and Dayclub. We speak architecturally, of course.

The Palms is advancing its design of its club haven in a massive way with Kaos Dome, which is exactly as it is described: a see-through cover high above the Kaos pools area, connected to Kaos Nightclub.

Both clubs will close entirely Sept. 15 for construction, stay dark for six weeks, then Cardi B returns to re-open the space on Halloween with a “Demon Dome” spectacular.

The resort will keep the structure in place through March, then Kaos Dome comes down for a traditional summer season. If the party crowd loves the Dome, it will be back up in the fall of 2020.

“This is part of the original idea, to run pool parties through the winter,” Palms general manager Jon Gray said in a phone chat Thursday afternoon. “We wanted a transparent, full-daylight, enclosed and climate-controlled environment. It’s incredible, it’s massive and there is nothing else like it in Las Vegas.”

The structure is 70 feet high (easily clearing the 60-foot-tall “Demon With A Bowl” statue by Damien Hirst at the center of the complex) and covers 33,000 square feet of heretofore outdoor pool space. Constructed by Eventstar Structure Corp. of Miami, the structure is in a fixed position where the temperature can be controlled.

“We talked to several vendors to maintain the kind of environment we need to keep it comfortable,” Gray said. “It is a full structure, with columns, a permanent dome.”

The announcement arrives as the hotel has taken over all nightlife operations from Clique Hospitality, brought onboard during the hotel’s extensive renovations. The Palms’ execs are now enacting all of the resorts’ nightlife strategies in-house, and Gray said that his team sent the concept to owners Lorenzo and Frank Fertitta III, who signed off on the Kaos Dome project.

The emphasis on year-round business indicates the scope of both Kaos clubs. Gray said the resort has been pulling in 6,000-8,000 guests per day and night on Saturdays.

“Business is great, our revenues have been great, and if you look at the number of bodies coming through the doors, we are doing very well,” Gray said.

Gray also said that the hotel’s artists, including Cardi B and Marshmello, have been notified about the changes.

“They’re blown away by the idea of having pool parties in the winter,” Gray said, “and our Halloween party is going to be incredible. We have Marilyn Manson in the Pearl and Cardi B at Kaos. It’s going to be the place to be.”

Veteran stand-up Gary Vider is recording his debut album at Comedy Cellar at the Rio through the weekend. Vider headlines a lineup that also features Dan Soder, Kathleen Dunbar and Robert Kelly, with host Mark Cohen. Shows are at 7 p.m. and 9 p.m. The New York-based Vider is riding success as a finalist on “America’s Got Talent.”

Rare is the overture from Dollar Loan Center founder Chuck Brennan with a movie tip. But the entrepreneur and ardent rock ‘n’ roll fan checked in to endorse “The Ringmaster” documentary by Las Vegas native Zach Capp. The film screens at 7:30 p.m. Saturday at Century Orleans 18 during the Silver State Film Festival Capp, along with co-directors Molly Dworsky and Dave Newberg will be on hand for a Q&A related to the film.

The doc centers on Larry and Linda Lang’s famed onion rings, which originated in 1949 in Nobles County, Minnesota, with the family patriarch Michael Lang’s secret recipe.

Brennan loves these rings so much he installed a Lang’s Onion Rings concession at his Badlands Speedway in Brandon, South Dakota. Brennan is also tight with legendary rock band Kiss, which makes an appearance in the film. There is a taste test at Piero’s Italian Restaurant, set up by owner Freddie Glusman which includes none other than Raiders owner Mark Davis. Capp then pitches Davis on “Raider Rings” for the team’s new home in Vegas.

What else … Oh, Capp, who is a recovering gambling addict, also documents his dogged tracking of the publicity-shy Larry Lang, who is an institution in the upper-Midwest.

“(Kiss front man) Paul Stanley was one of the investors in the track and did a tasting of the onion rings, loved them, as did the whole band,” Brennan says. “So we decided to do business with this guy, and what a crazy situation it ended up being. All of that made the movie.”

Vegas magician icons Mac King and Lance Burton — both of whom are from Kentucky — join Norm Clarke on “Conversations with Norm” at Myron’s Cabaret Jazz at 2 p.m. Sunday. Tickets are $25 (a mere pittance); call 702-749-2000. These guys are worth seeing, unless one of them shows up in his Cloak of Invisibility … 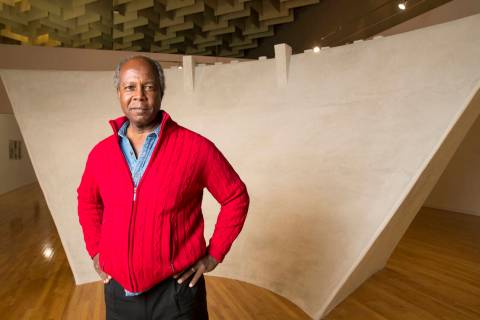