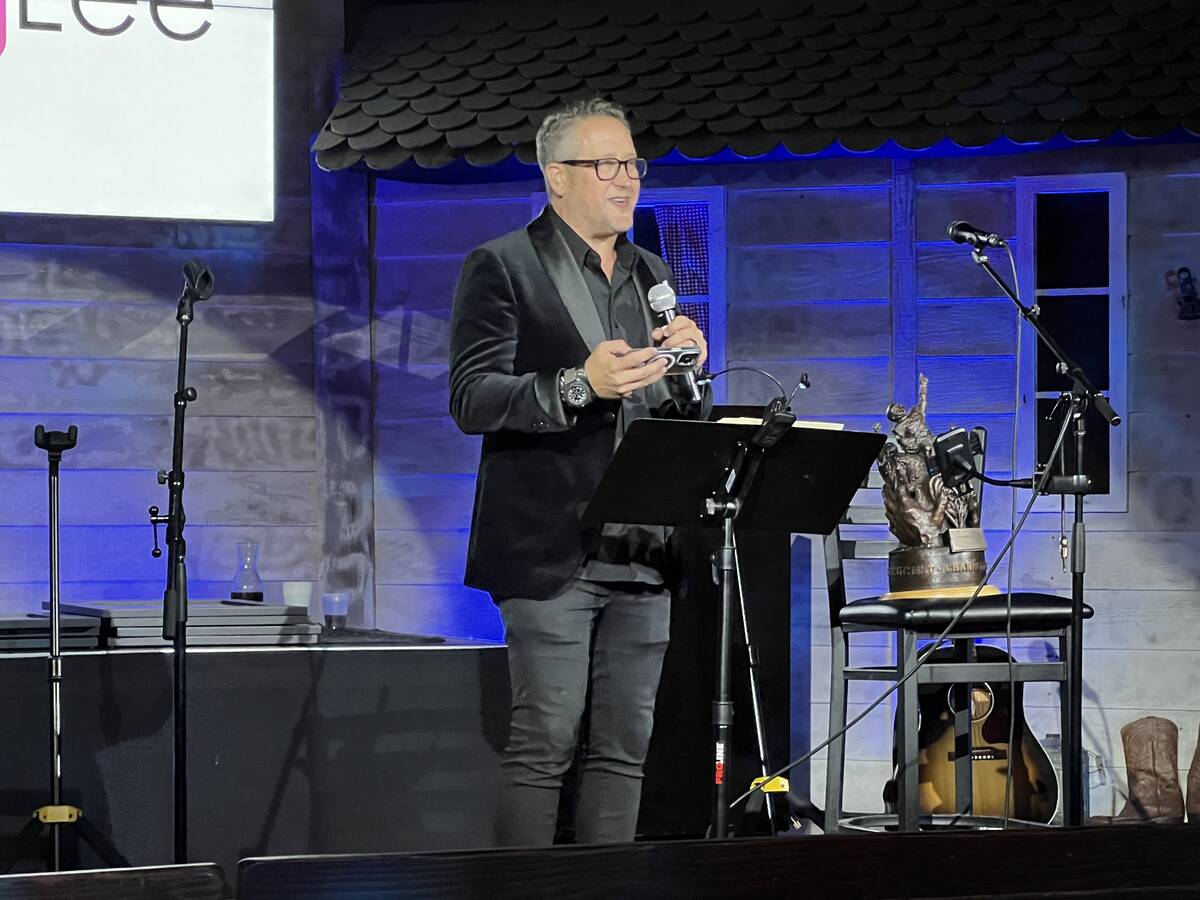 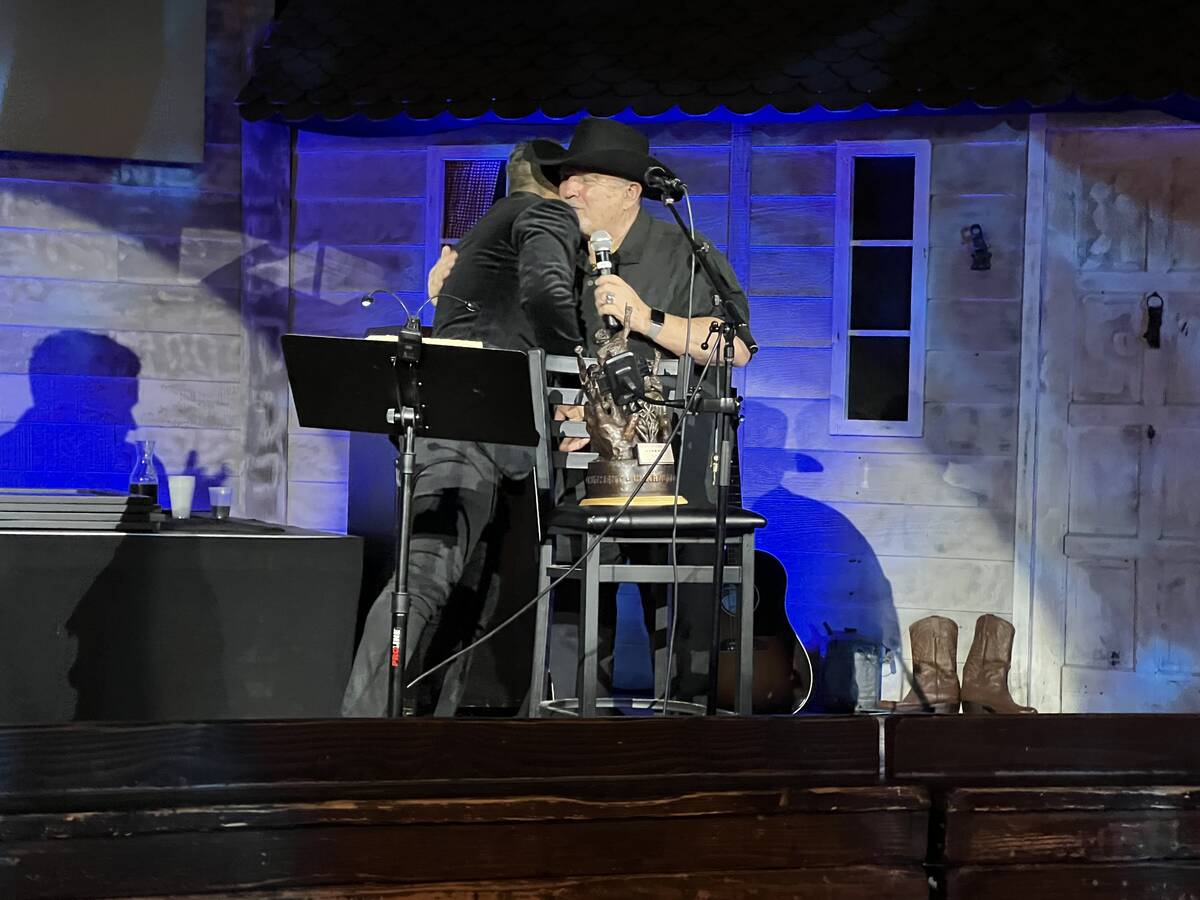 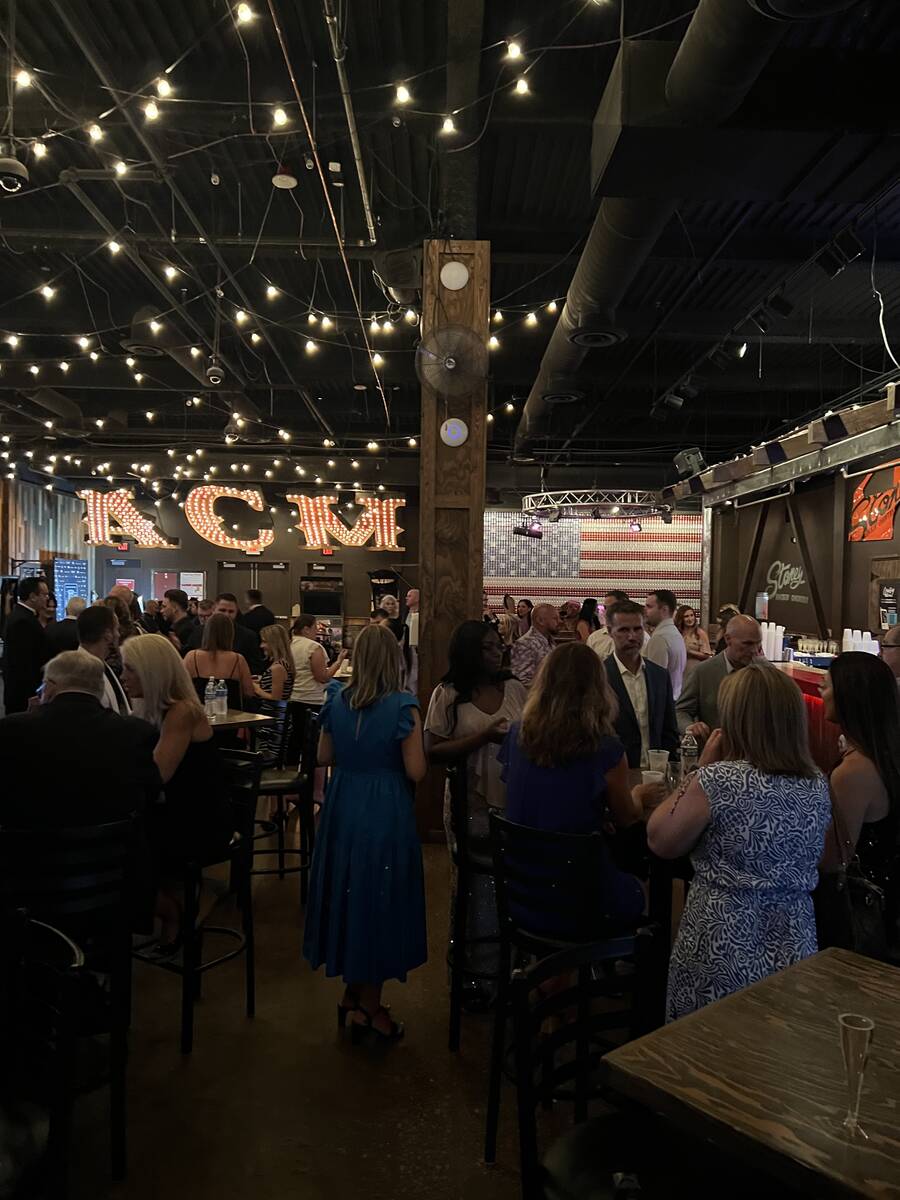 The Kats! Bureau at this writing is at Notoriety Live, the Robin Leach Lounge specifically. Named for my departed friend and colleague. Justin Young is performing a dazzling jazz sax show. It’s on at 2 p.m., last Sunday of every month. Young has a very Dave Koz vibe.

It’s something of fan unexpected gem, here on the top floor of Neonopolis. Well, I expected it. I have written of the show.

Taking measured steps, the Las Vegas Walk of Stars has been awarding stars over the past few months. Saturday the film and TV director and author Nick Nanton was honored at a ceremony at Stoney’s Rockin’ Country at Town Square.

The LVWOS had been in a state of flux (and headquartered in the state of California) following the death of longtime president Bob Alexander, in September 2020. Marilyn Ball, the VP of the organization under Alexander, has since taken over (Ball is the mother of Lindsay Wagner, the “Bionic Woman” from the 1970s TV series).

Ball lives in Palm Springs, and also worked with Alexander on the Palm Springs Walk of Stars.

While Nanton’s dedication was a private event, LVWOS is about to be returned to public celebrations. A dual presentation honoring the late film icons Carrie Fisher and Debbie Reynolds is just taking root.

The great filmmaker Todd Fisher, Carrie Fisher’s brother and Reynolds’ son, says he’s determined to make that Walk of Stars ceremony a significant Las Vegas event. This is still in the early stages, but as Fisher says, “We will have a party, and I don’t care if it costs more than the star (which is awarded with a $25,000 fee). My mother, especially, loved a party.”

Saturday’s party at Stoney’s was a move in that direction.

Nanton’s most famous connection to Las Vegas is his 2018 documentary, “Rudy Ruettiger: The Walk On.” Ruettiger is “Rudy” of the 1993 film, of course, and a Vegas resident. Remarkably, the movie celebrates its 30th anniversary next year.

Ruettiger was in the saloon, even wearing a black cowboy hat (we’ll say a Resistol), and possibly spurs. Now an inspirational speaker, Ruettiger presented Nanton with a Rudy Award, presented to individuals who have been especially inspiring. Nanton deserved that honor, too, having produced and directed dozens of documentaries, (among them “Operation Toussaint,” “Visioneer,” and “A New Leash on Life: The K9s for Warriors Story.”

Nanton’s star follows earlier ceremonies honoring David Cassidy and Cook E. Jarr, both placed on April 12. All three of these events have been private parties. The Jarr’s was so private it wasn’t even a ceremony. Workers placed the star in the dead of night at the Eiffel Tower. Jarr has been battling health problems and wanted zero fanfare.

Cassidy’s event was in an upstairs ballroom at Bally’s, funded and organized by his international fan club. Say this for Cassidy, he still has a fervent following, some 3 1/2 years after his death. But none of his family members were in attendance at the the closed-to-the-public event.

Cassidy forged an extensive performance history in Las Vegas, starring in “EFX” at MGM Grand in what is now the “Ka” theater, and also “At the Copa” musical at the Rio (yours truly emceed that event, and also recited the Clark County proclamation announcing July 30, 2022, as Nick Nanton Day during Saturday’s ceremony).

Nanton’s was the 108th star placed. Those who seek a specific star are required to pay $25,000. Nanton’s was funded by clients and friends. Many of the recipients have been obvious. Wayne Newton, Elvis, the Rat Pack, Siegfried & Roy, Frank Marino (the only entertainer with two stars, as he routinely reminds), and Donny and Marie Osmond have all been honored.

A show that has exceeded expectations is the topless, circus-fashioned “Rouge” at The Strat Theater. I’ve seen a full dress rehearsal and opening night, enjoying the latter far more than the former. But some very discriminate Vegas entertainment types have caught the show recently and are raving about it. The lineup in that venue is solid, rotating the LED-trimmed dance show“Illuminate,” Banackek’s “Mind Games” mentalist production, and beguiling magician Xavier Mortimer. And we need to ask,“Sammy? You out there?” awaiting a return of the Red Rocker Sammy Hagar this winter.

Nikki Logan & Golden is playing 7 p.m.-10 p.m. Wednesday at Maxan Jazz Sushi & Jazz at 4130 Decatur Blvd. at Flamingo Road. New-ish place is climbing the CHA ladder. We met Logan as backing singer for Michael Grimm. If you can share a stage with Grimm, you are le-GIT! The Golden crew is Billy Ray Charles on guitar, Rocco Barbato on sax, Mark Sidener on drums and Billy Nunn on keys. This is swinging, R&B and jazz scene. Table reservations at 702-485-3926.