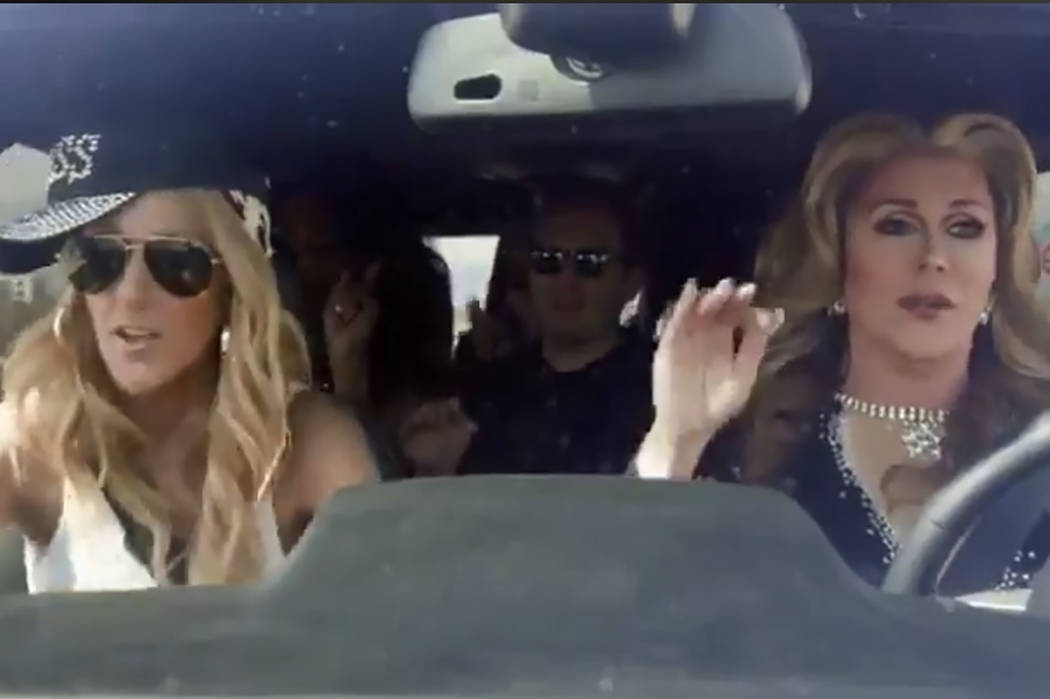 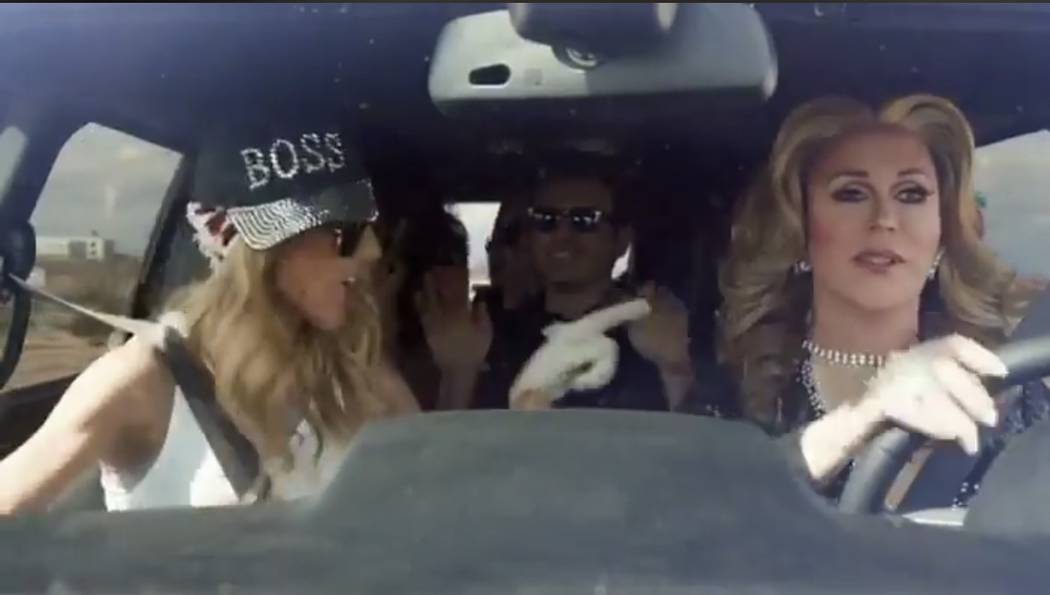 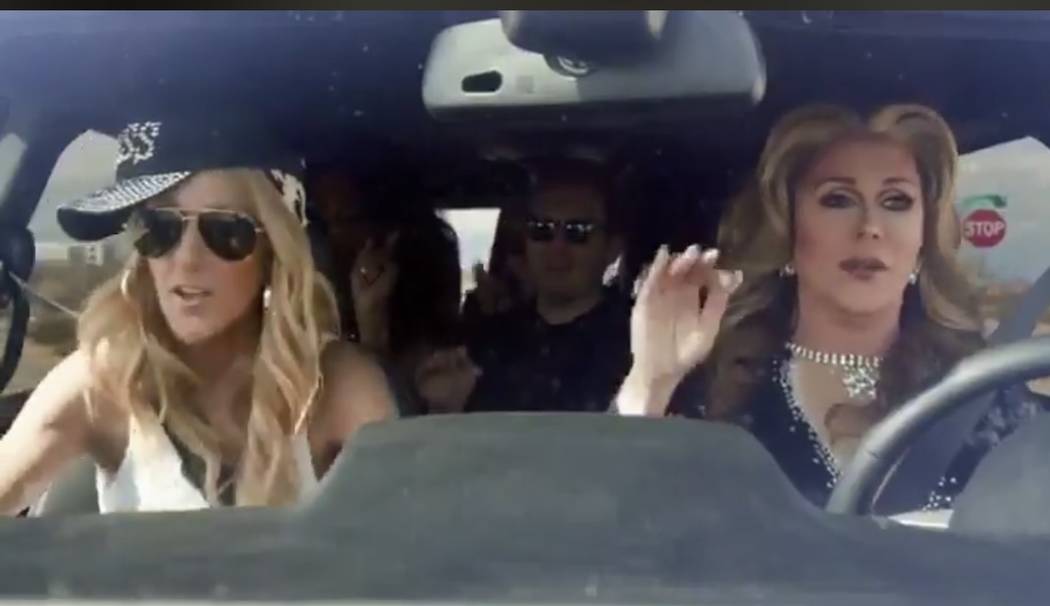 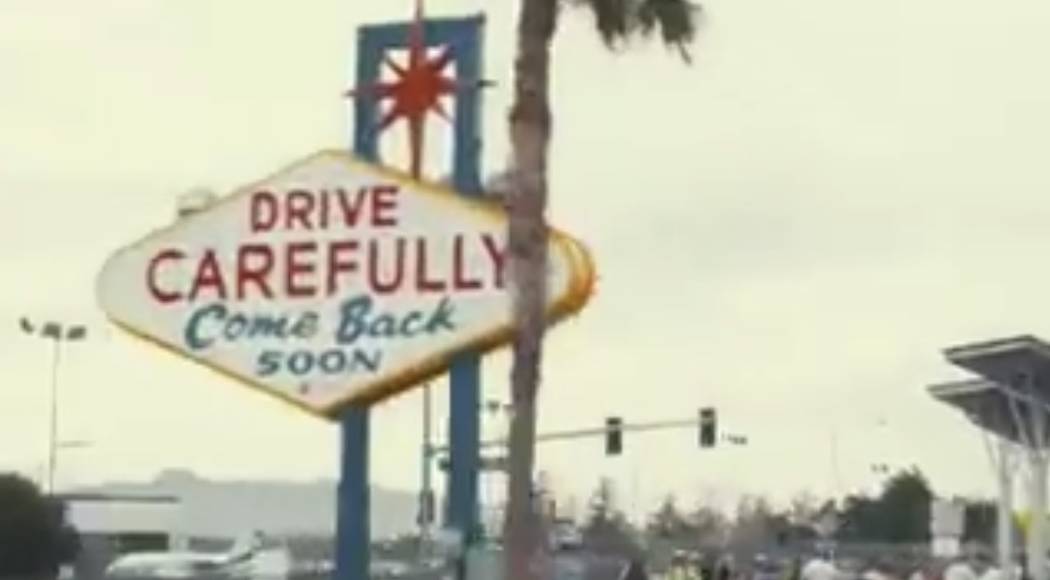 The lesser-photographed, back side of the Welcome to Fabulous Las Vegas sign is shown during sendoff video planned for Celine Dion's closing at the Colosseum at Caesars Palace. (Instagram @CelineDIon)

Celine Dion has found new favorite creative outlet: Riding shotgun around Las Vegas while singing to her own songs.

Dion was at it again last week, filming for a day with Steven Wayne, who has portrayed Dion in “Frank Marino’s Divas Las Vegas.” Wayne-as-Celine is shown driving while the superstar, wearing a silver-sequined BOSS ball cap, leads a sing-along to her 2011 hit, “I Drove All Night.”

Reportedly, the video is a sendoff clip to be made public at 3 p.m. Wednesday on Dion’s official Facebook page, as she plans to close her residency at the Colosseum at Caesars Palace on June 8.

Dion also sang as a passenger on March 22, as she and James Corden recorded a segment for “Carpool Karaoke” in Las Vegas, including a stretch at the Bellagio fountains.

A teaser clip of “I Drove All Night” appeared Saturday on Dion’s social-media pages. The clip showing Dion and Wayne in the front seat and unidentified passengers in the back, all singing the song while passing the back side of the “Welcome To Fabulous Las Vegas” sign, with the less-photographed message, “Drive Carefully, Come Back Soon.”

Wayne has been a cast member in “Divas” since 1999, also performing as Cher, Bette Midler and Katy Perry. Production creator and star Marino says Wayne is in talks to return to the show, which abruptly closed at Linq last June, if and when it ever returns to the stage. Wayne is also expected to be in a “Divas” lineup for a Cinco de Mayo “Diva-Licious Brunch” at DW Bistro.

Wayne had not worked with Dion before this video. But Marino and his partner, SPI Entertainment executive Alex Schechter, once showed the Caesars headliner a photo from a show program after a Dion performance at the Colosseum.

Dion looked at the pic of Wayne, exhaustively made over to look like her, laughed and said, “Now I can take a day off!”