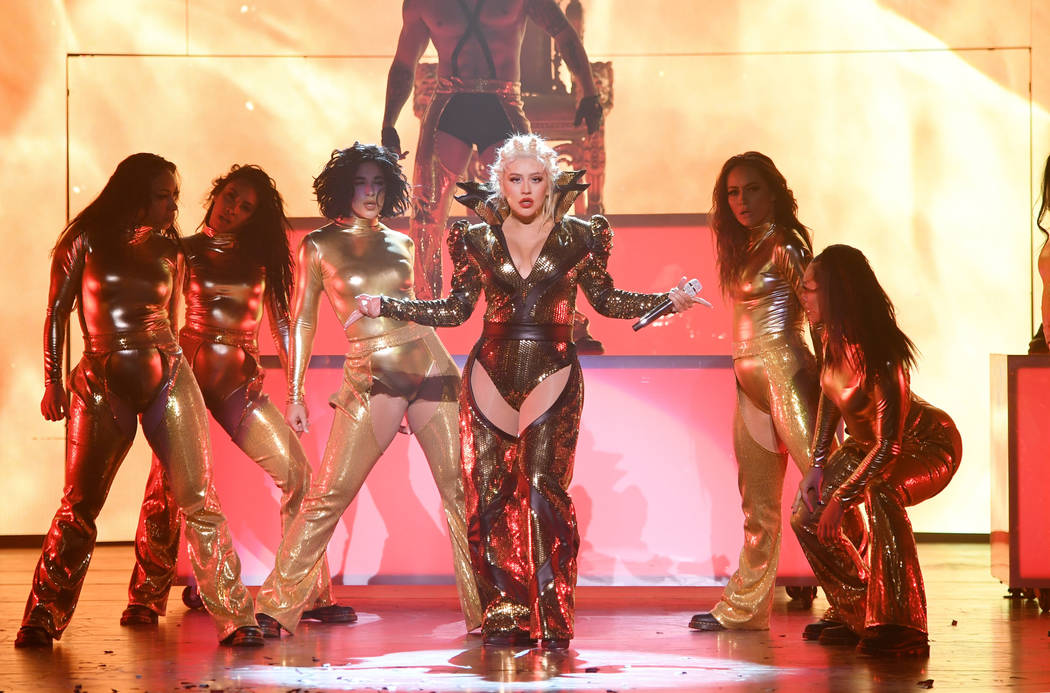 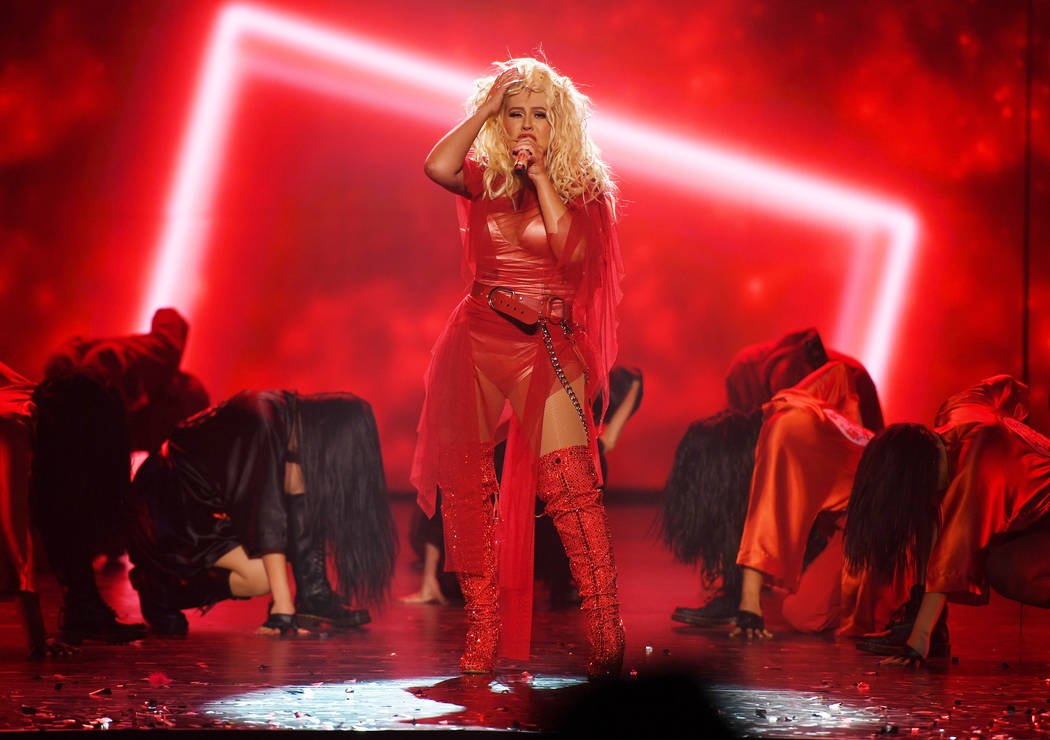 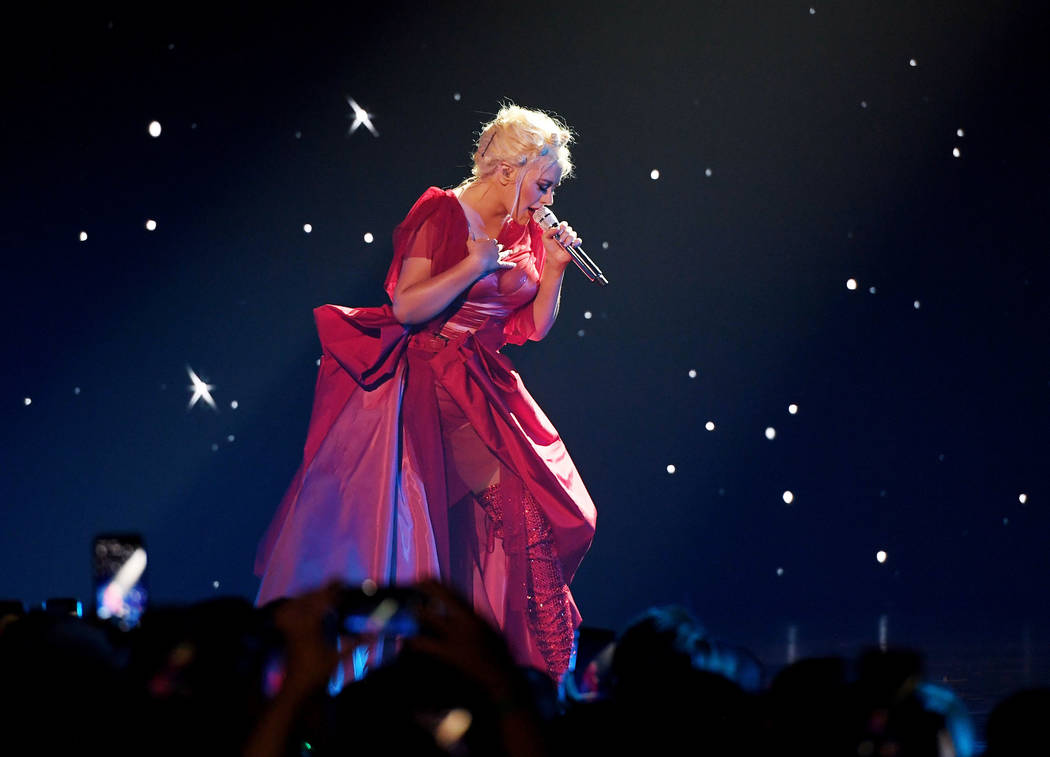 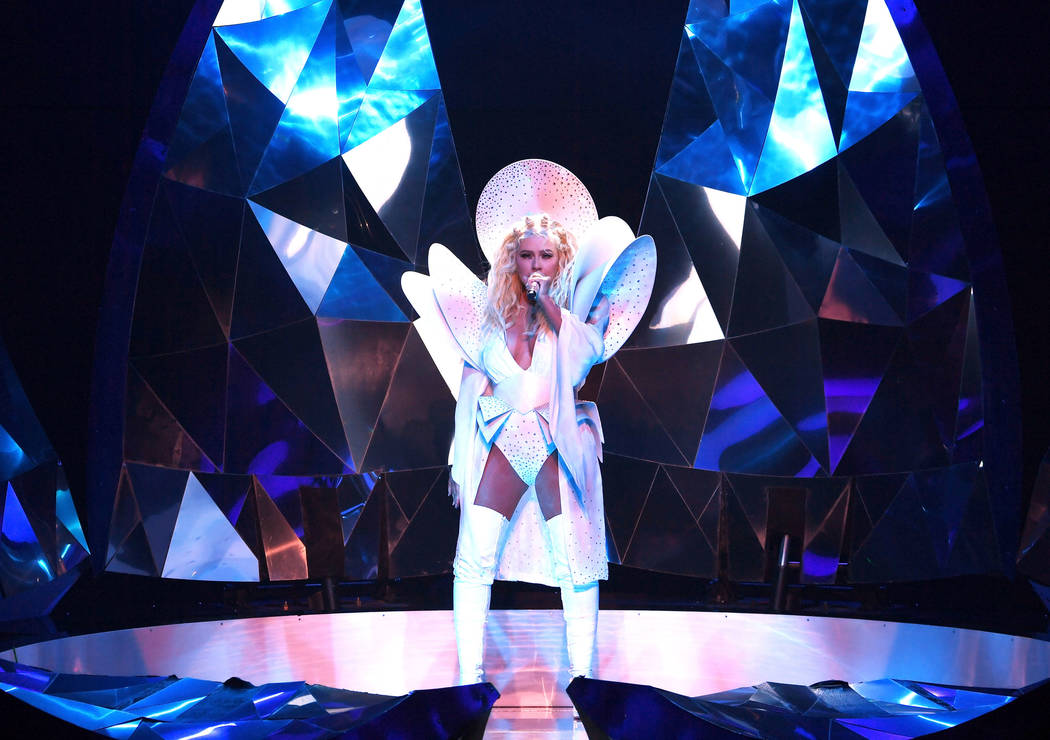 The Kats! Bureau at this writing is Jimmy Kimmel’s Comedy Club at Linq Promenade. I’m enjoying Jerry’s Towel, which is actually a mocktail of lime juice, kiwi pure and Sierra Mist served at the bar here.

Hopefully anyone with a pedestrian knowledge of Runnin’ Rebel knows the inspiration for Jerry’s Towel. If not, you’re benched.

In “XPerience,” Christina Aguilera sings and performs her life story of female empowerment with great force and conviction. It’s so convincing, in fact, that I asked Aguilera how my demo — the guys, essentially — should receive that message. Do we need to step back, as a demographic, and reassess our relationship with females?

“I’ve always appreciated the conversation, but if anything, I’m just sharing my story. I’m sharing my emotions just as raw as I can, unapologetically,” she said in a recent conversation at Zappos Theater, where “Xperience” is performed. “I think that’s the message, and maybe it’s feeling that we are a movement, and women should feel empowered.”

Aguilera recited the line from “Can’t Hold Us Down,” where she sings, “If you look back in history it’s a common double standard of society. The guy gets all the glory, the more he can score, while the girl can do the same, yet you call her a whore.”

She added, “There are so many double-standards that as women we have been asked to live by, but I don’t think it’s a matter of shaming anybody, straight males include. It’s a matter of having a think piece, and openining the door to that conversation.”

Nightclubs on and off the Strip are trying to draft the Toronto Raptors for their NBA Finals victory party and the St. Louis Blues for their Stanley Cup Final shindig. Hearing rumbles that the Raptors are in town tonight (with Wynn Las Vegas the front-runner), and the Blues on Saturday (the Palms could have a blue hue). All of this is subject to “conditions on the ground,” I’m told. Often teams split ranks or change plans on the fly, depending on who has the strongest connections in VegasVille.

Wynn Las Vegas has a tacit connection to Toronto with ubiquitous Raptors fan, and resident XS Nightclub headliner, Drake. The rap superstar and Toronto native actually promised to drop two new singles this weekend celebrating the Raptors’ title, “Money in the Grave” featuring Rick Ross and “Omertà.” The dual tunes are the first major releases from Drake in 2019.

Meantime, should the Blues make it to the Palms, Kaos Nightclub and Dayclub will be jammed for star headliner Cardi B’s late-Saturday, early Sunday appearance. She’s about a 3 a.m. arrival, but can always (wait for it) light the lamp (boom!).

Season 6 of “Penn & Teller: Fool Us” on premieres at 8 p.m. Monday. For the first time in the series’ history, P&T try to fool a guest star: David Copperfield.

Ex-“Sopranos” cast members Steve Schirripa and Michael Imperoli had dinner at Rao’s at Caesars Palace on Friday night. The two were making good on an auction bid made by Joe Kaminkow of Aristocrat Gaming during the annual Keep Memory Alive “Power of Love” gala on March 16 at MGM Grand Garden Arena.

John Katsilometes’ column runs daily in the A section. His PodKats podcast can be found at reviewjournal.com/podcasts. Contact him at jkatsilometes@reviewjournal.com. Follow @johnnykats on Twitter,@JohnnyKats1on Instagram.