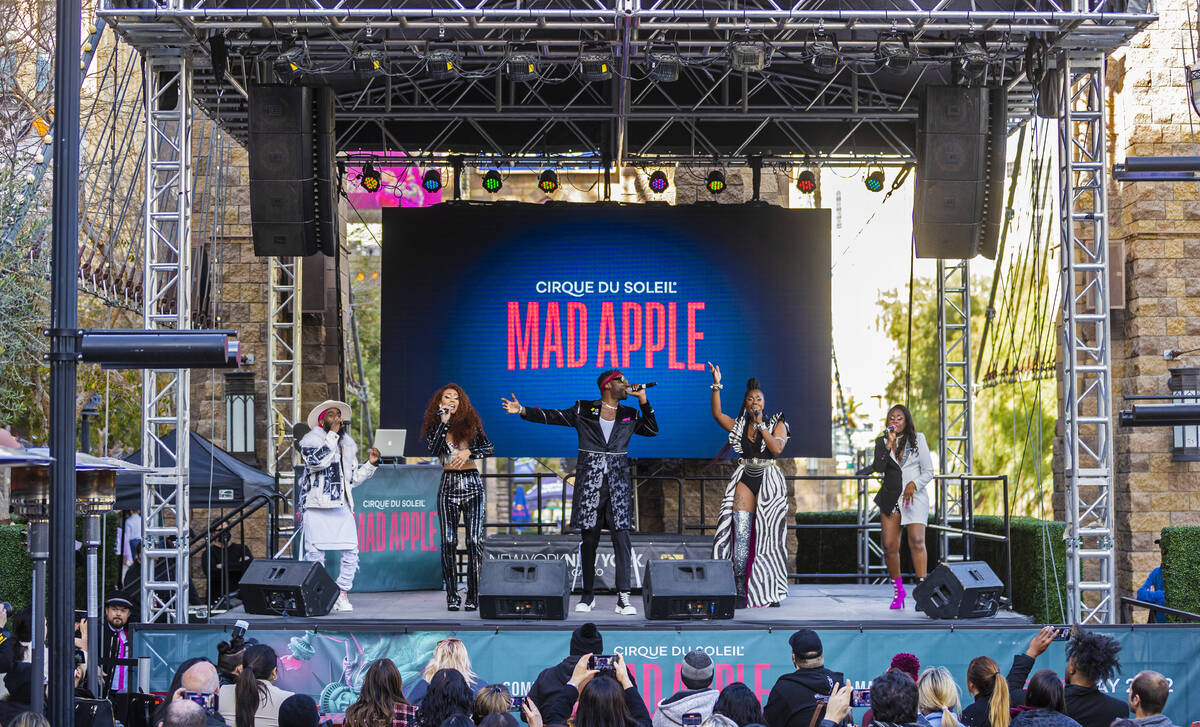 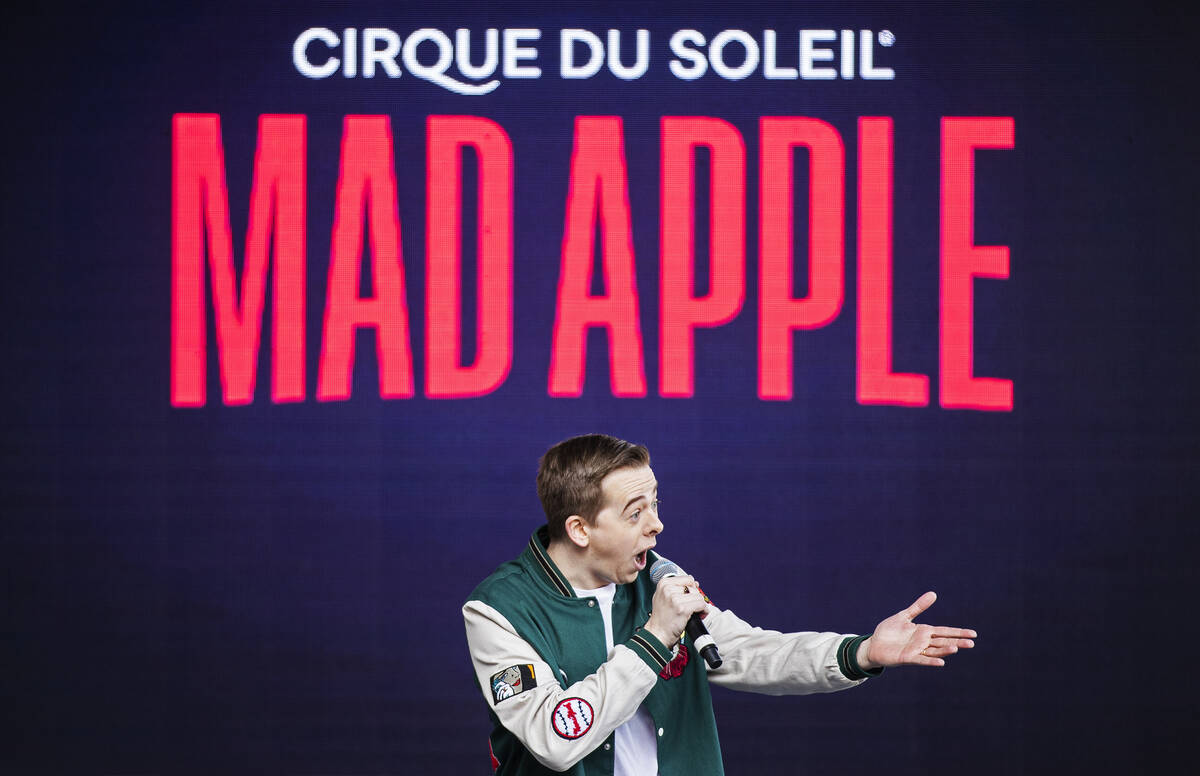 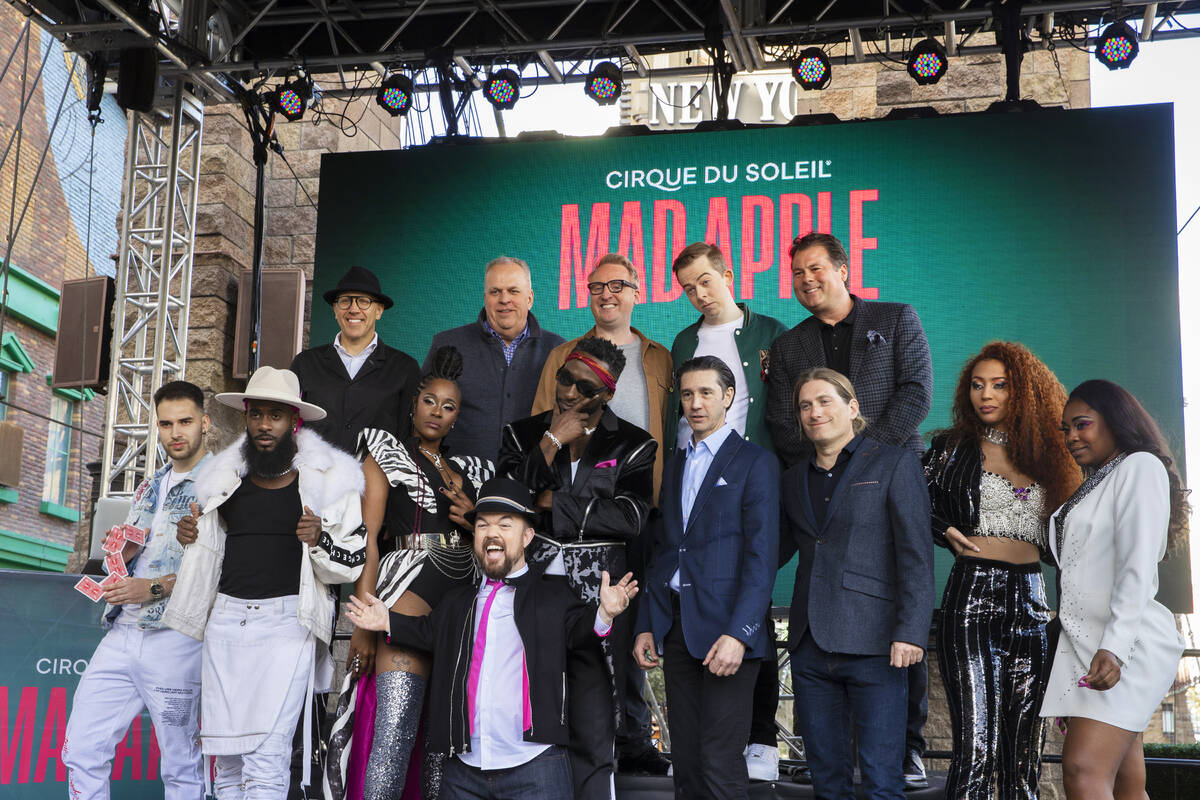 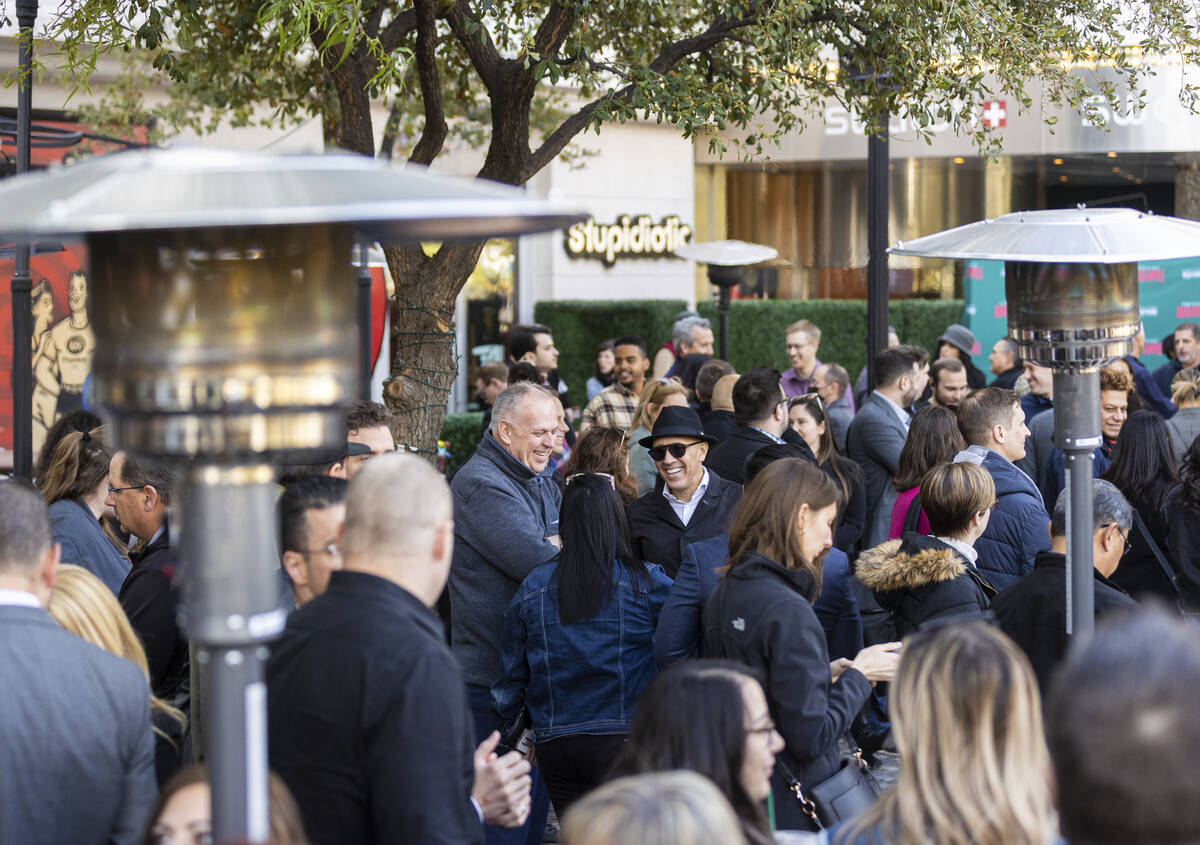 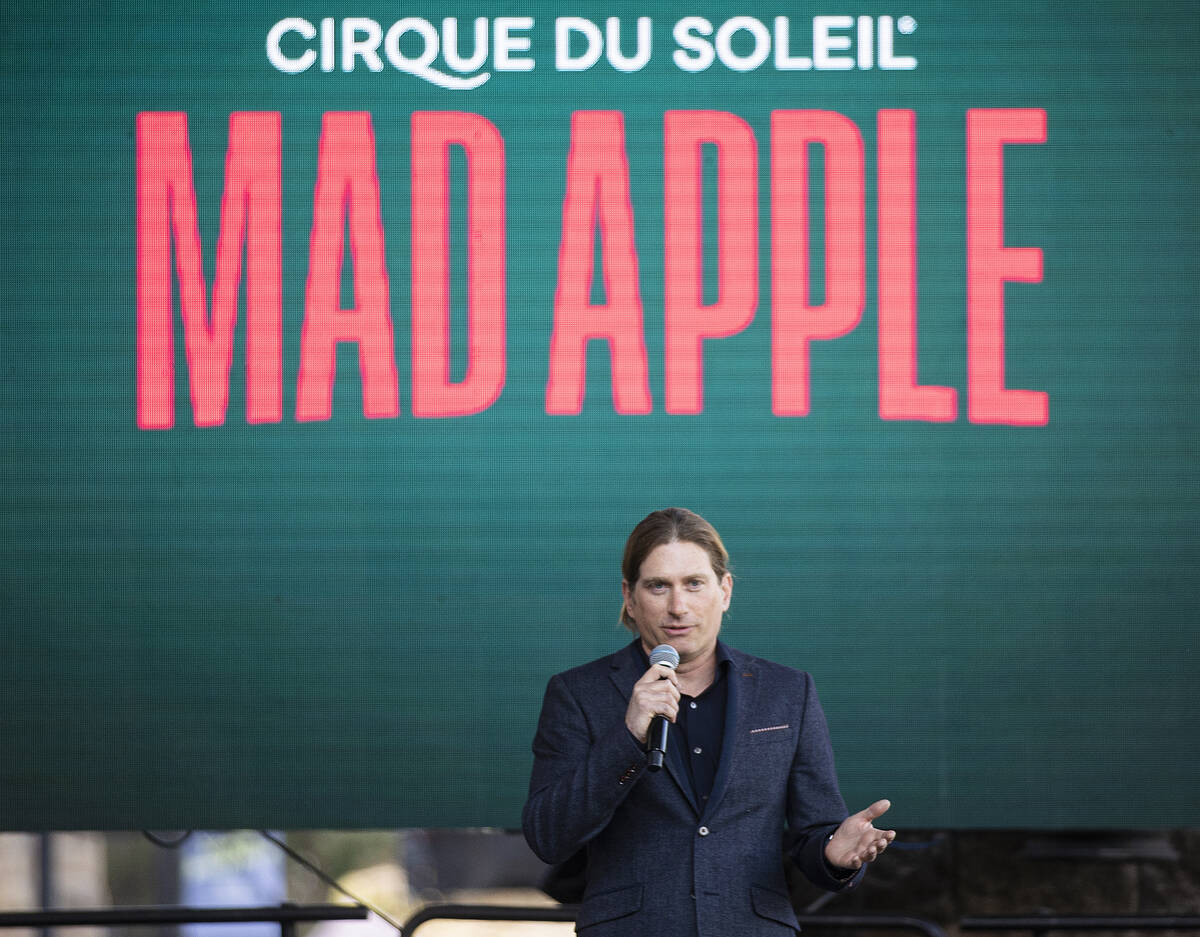 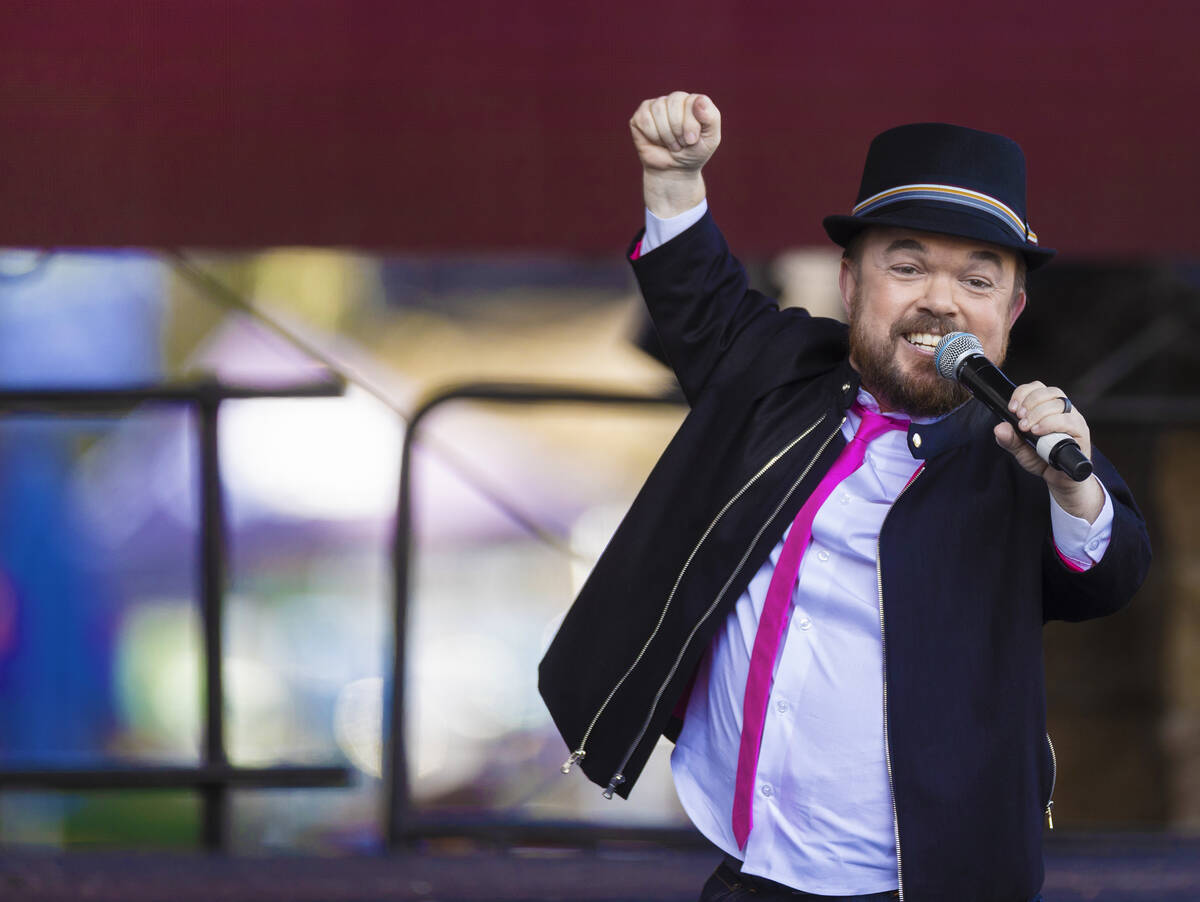 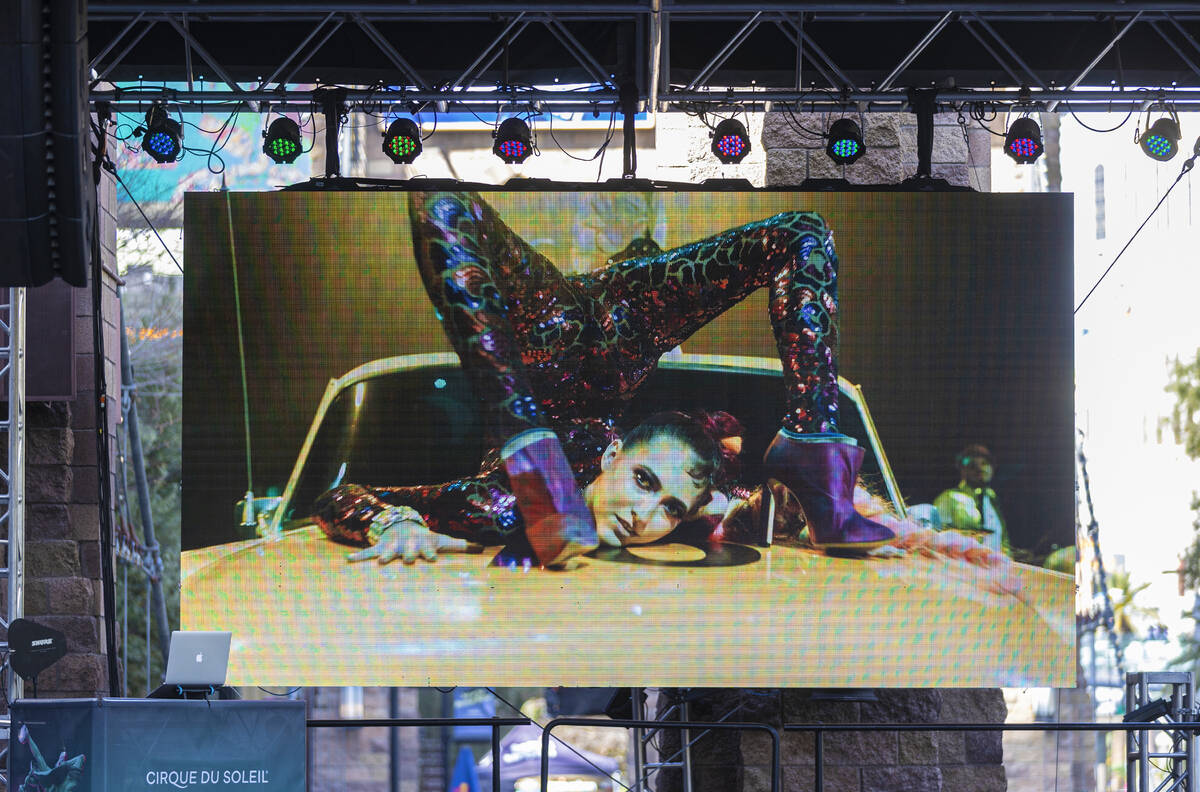 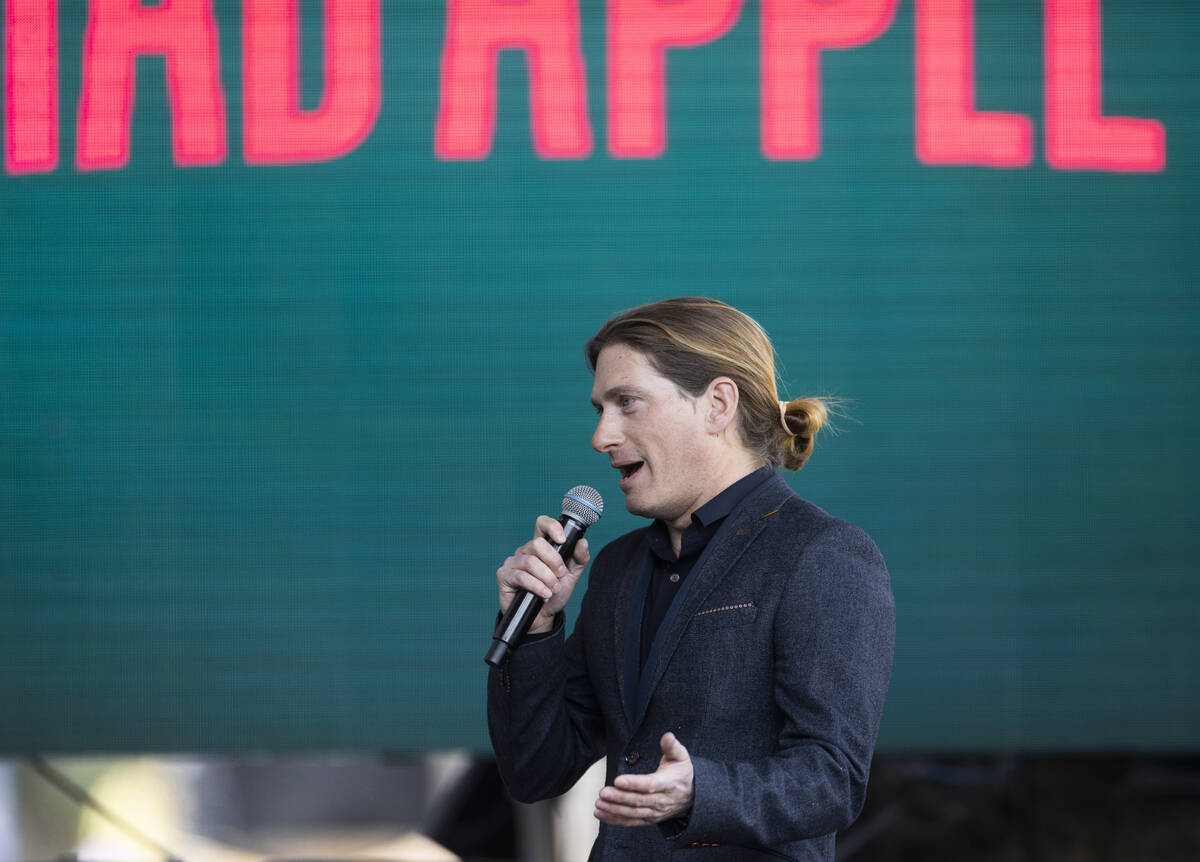 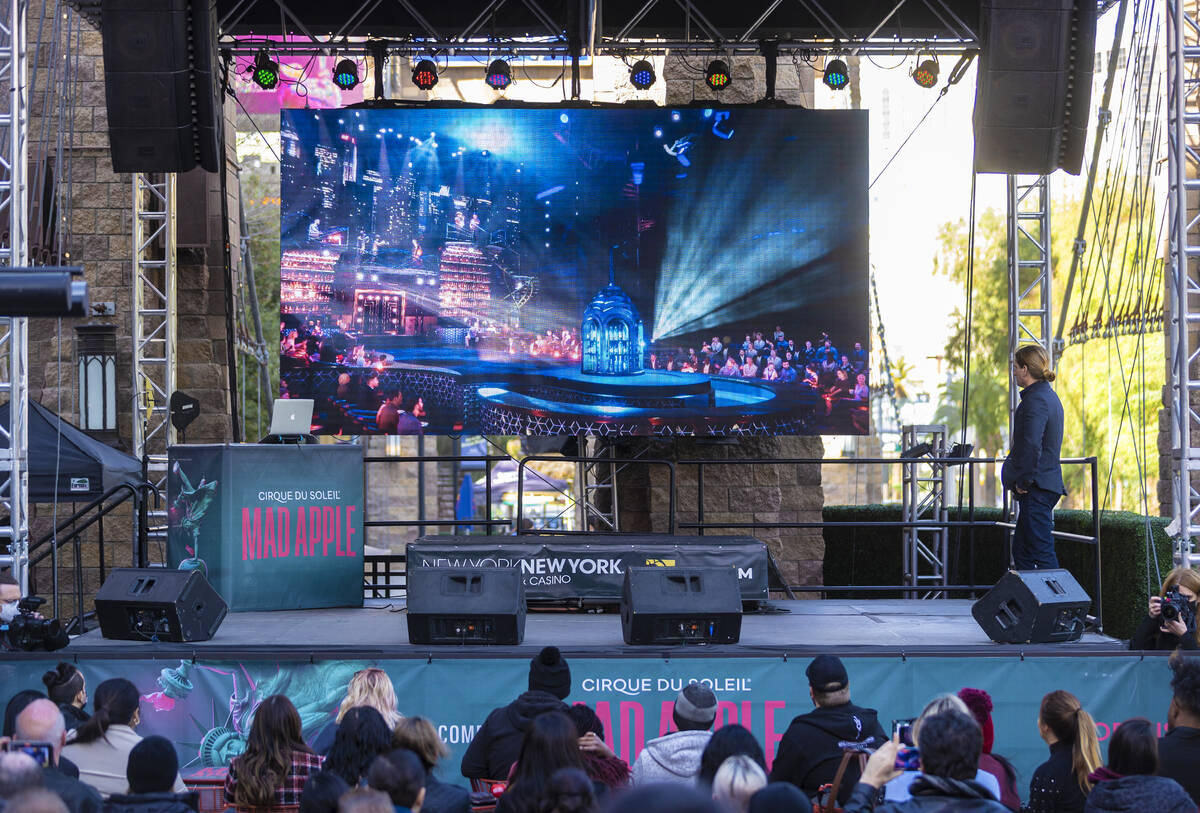 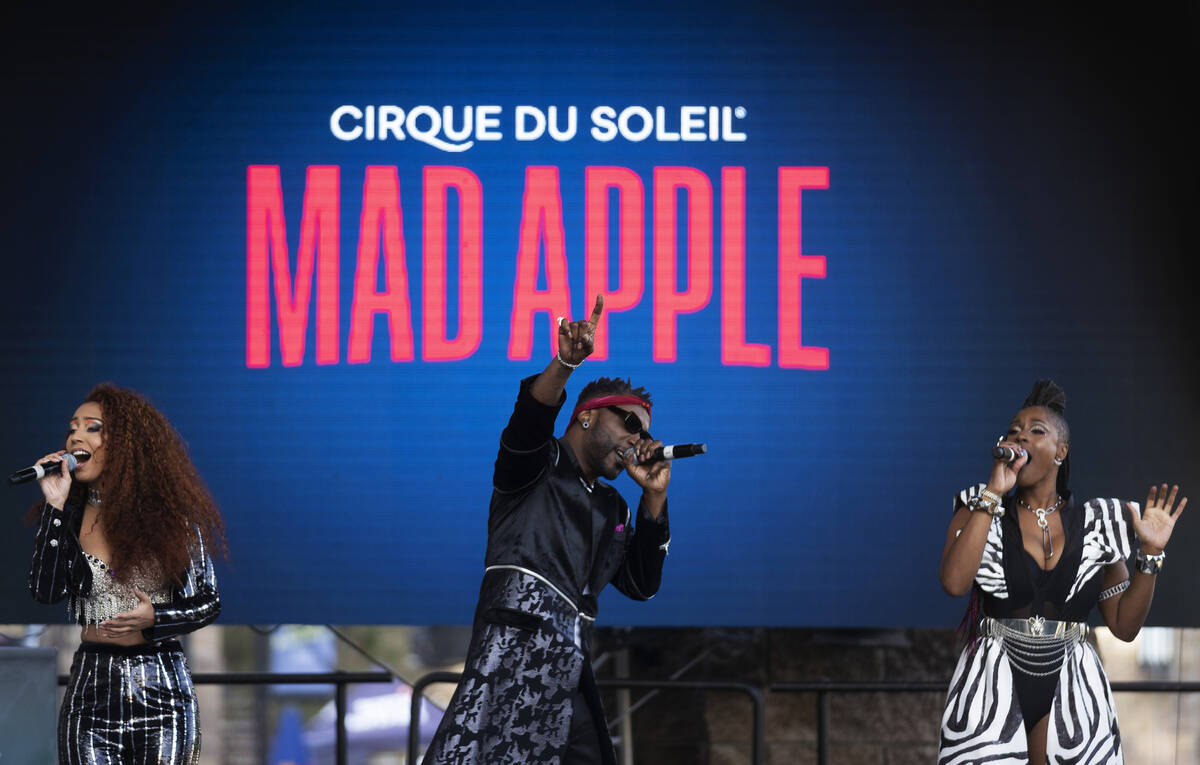 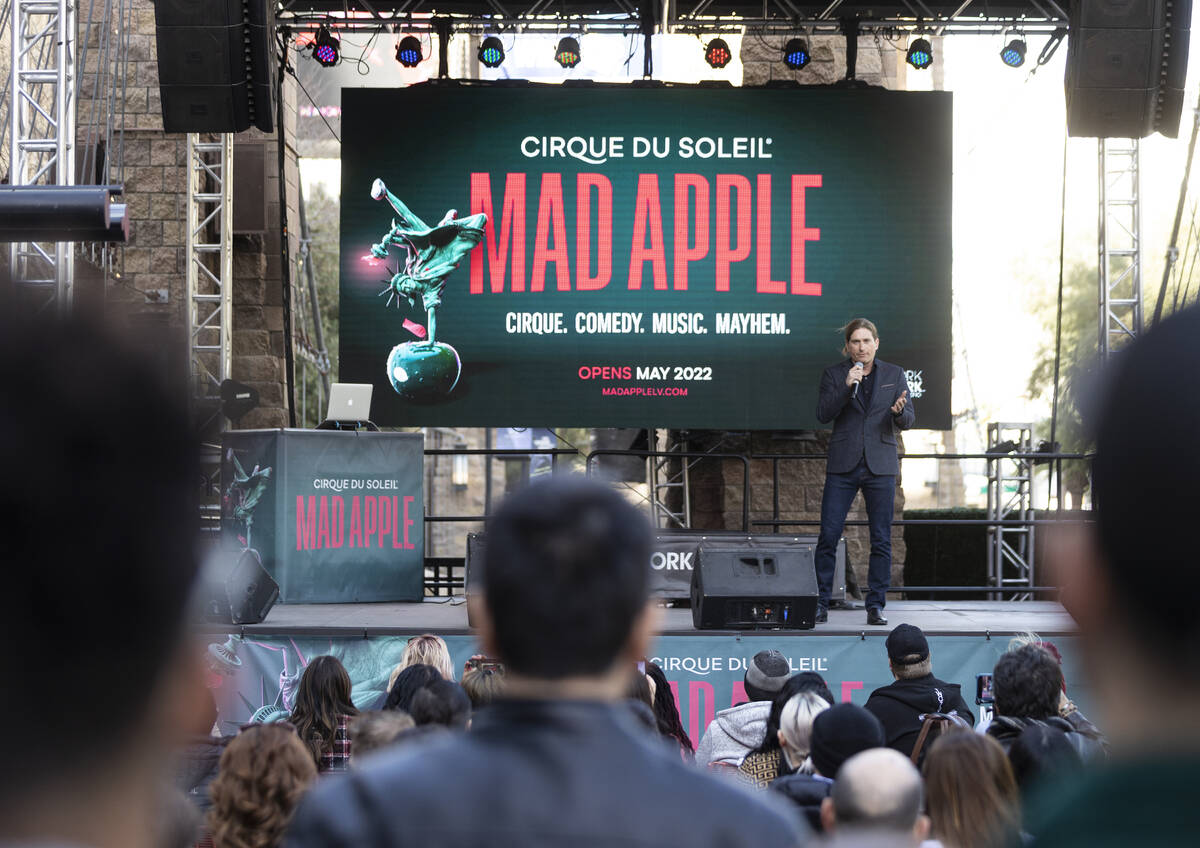 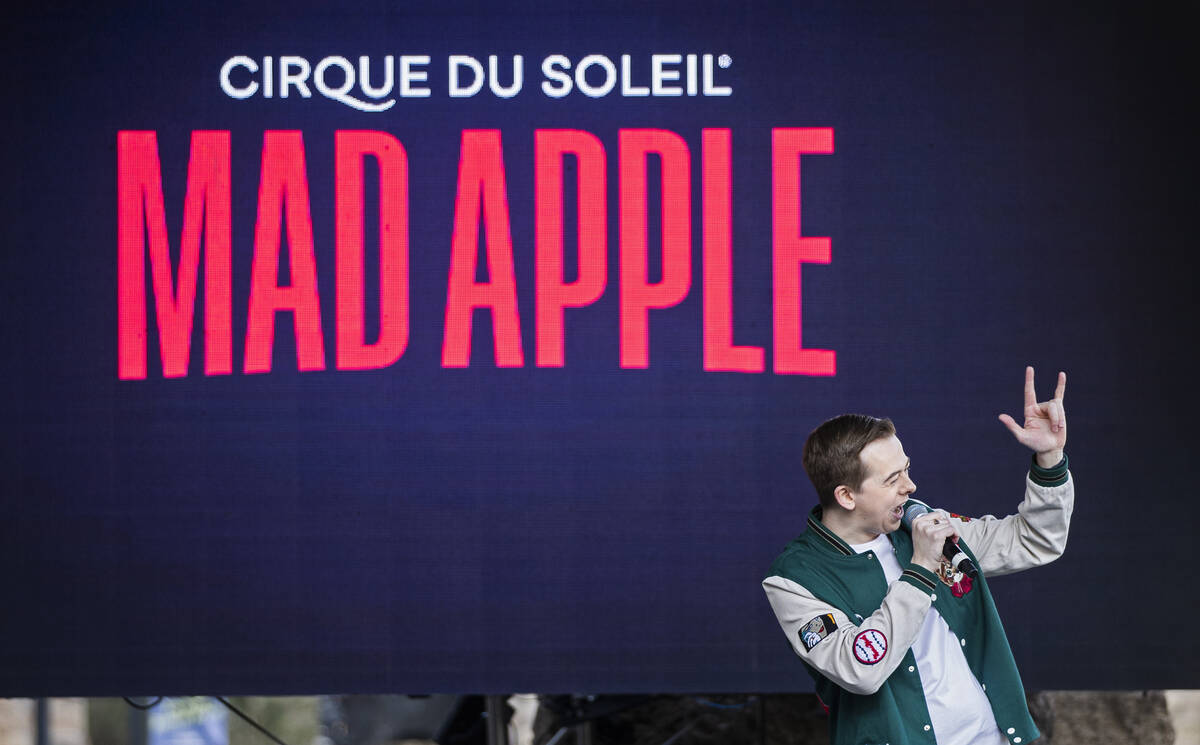 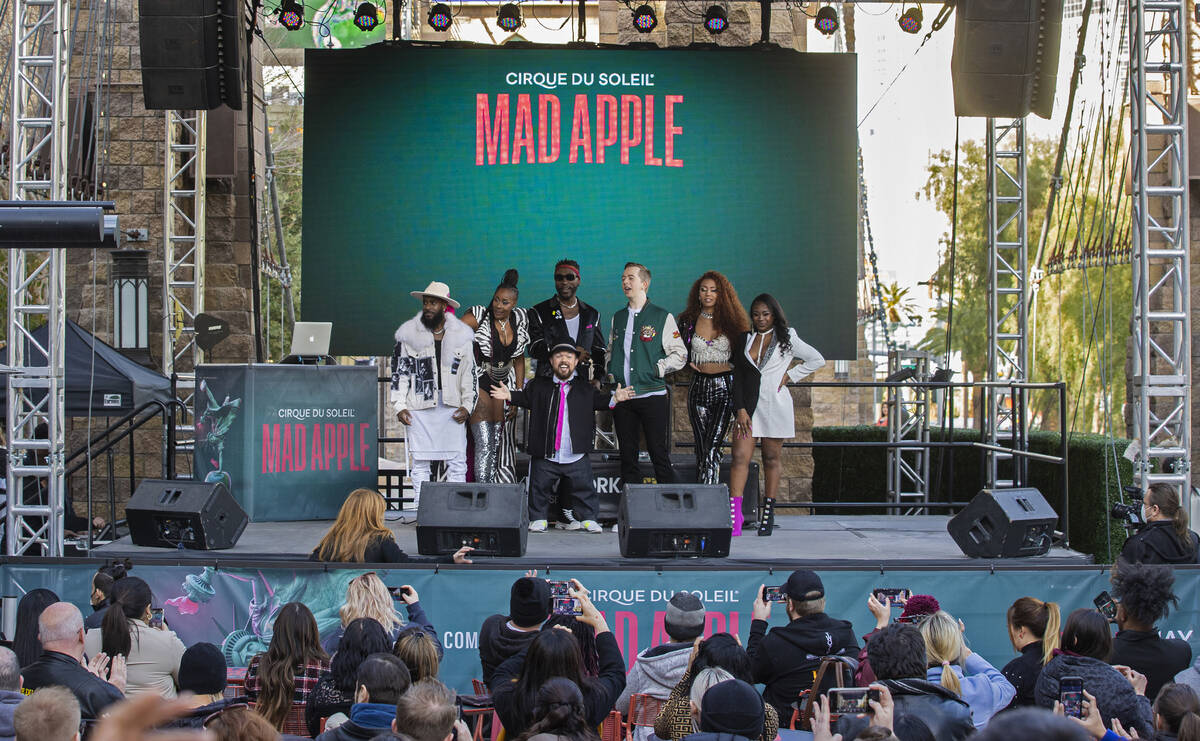 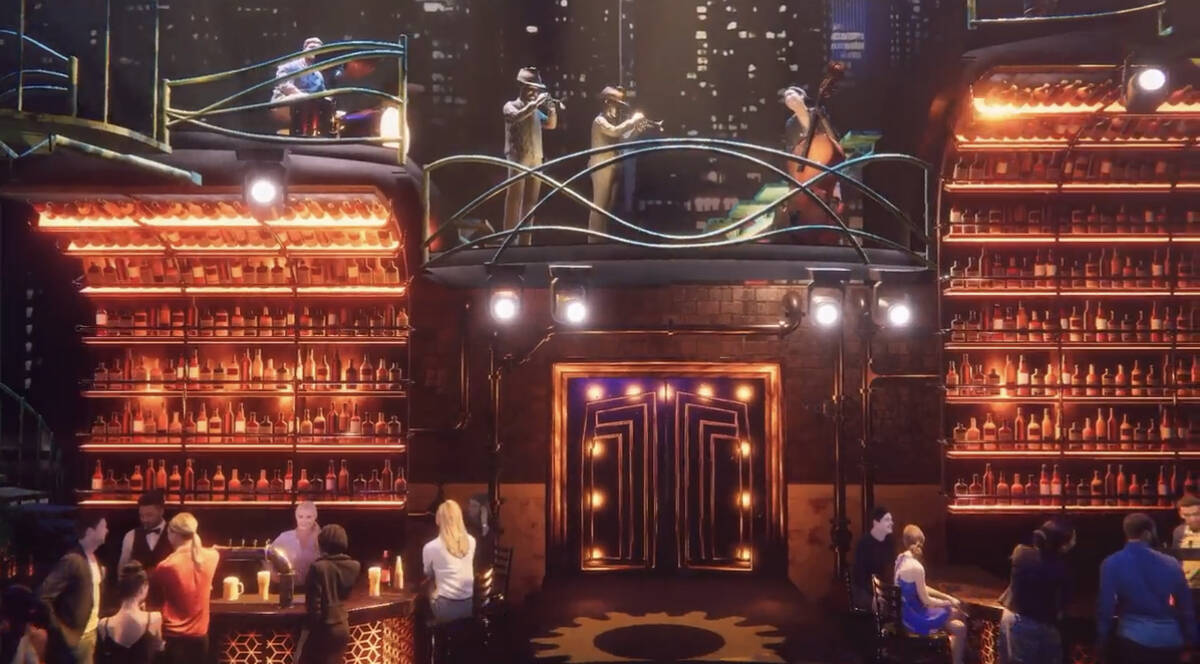 A look at the stage of "Mad Apple," opening in May at New York-New York. (Cirque du Soleil) 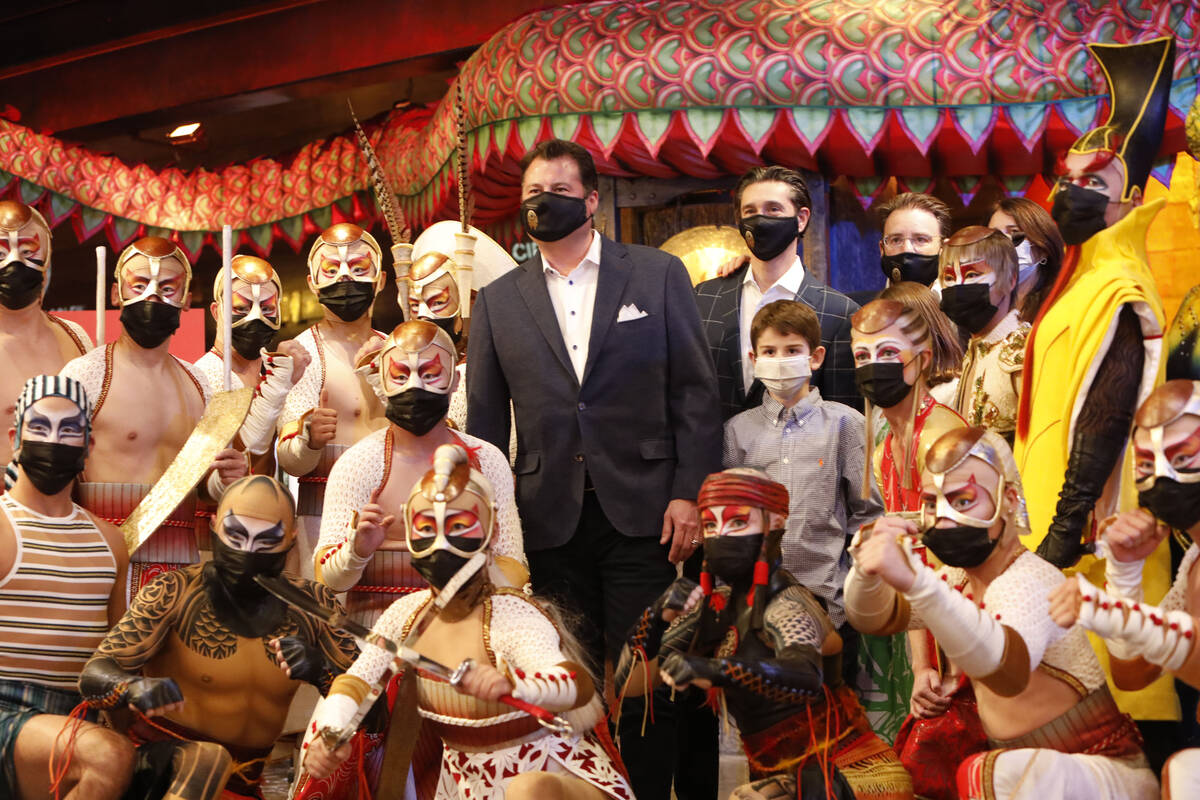 Cirque du Soleil is developing its first new show on the Strip in more than two years. But the company’s latest original foray borrows generously from a familiar theme and a famous city.

“Mad Apple” is set to open at New York-New York on May 26 (previews open May 12) with tickets starting at $59, without fees, available at MadAppleLV.com. The production is to reflect a night out in NYC. Veteran stand-up comics will perform sets around numbers from a live band (featuring the grand-nephew of a legendary vocalist Nat King Cole) and acts by Cirque artists.

“The best way of describing this show is the first time you ever went to New York,” says Simon Painter, founder of The Works Entertainment, co-producing the show with Cirque. “You have the greatest night out of your life. You saw the funniest comedian, you saw the craziest bands, you heard someone singing the most beautiful jazz ever, and then you saw somebody doing triple back-flips off the Brooklyn Bridge — all at 4 o’clock in the morning. That’s what this show is.”

The show is to be performed in a redesigned Zumanity Theater, where Cirque’s adult comedy-acrobatic production closed in November 2020 after a 17-year run. The show is for ages 5 and older, but recommended for those ages 16 and older for some of its late-night, adult content.

A formal announcement and sample performance event played out Tuesday, at 2:22 p.m., on the Strip-facing Brooklyn Bridge outside New York-New York.

We know from the outset the “Mad Apple” operation will employ a considerably smaller cast and crew than “Zumanity.” The new show incorporates 60 cast and crew, about half the number on the “Zumanity” team.

“Mad Apple” is now the sixth Cirque show on the Strip, joining “O” at Bellagio, “Mystere” at Treasure Island, “Ka” at MGM Grand, “Love” at Mirage and “Michael Jackson One” at Mandalay Bay. The company also operates Blue Man Group at Luxor, another of its more recent mergers.

“Mad Apple” is unique in that it is the first original Cirque production delivered on the Strip by one of its acquisition companies, specifically The Works. Cirque snapped up Painter’s company in February 2019.

The Works was a busy international entertainment company when Cirque stepped in, with mixed results in Las Vegas. Over the past decade, Painter’s troupe developed the touring production “The Illusionists” series of ensemble magic productions (which has played a holiday run on Broadway) and also “Circus 1903,” staged briefly at Paris Theater.

“The Illusionists” formerly featured Shin Lim, now a headliner at Mirage Theater and a show long rumored to be eyeing a Vegas run. The show was to be the featured production in the 2020 “One Night for One Drop” charity event, knocked out by COVID-19. “Circus 1903” was an inspired family show, filled with wondrous acts and a dynamite ringmaster in David Williamson that nonetheless closed in January 2018 after just five months. Painter’s company is also a partner in “America’s Got Talent Live!” still trying to fill the house at Luxor.

Soon after Cirque merged with The Works, the companies embarked on a boutique-style production, tentatively titled “caBARet,” at the former Bank nightclub space at Bellagio. That partnership was the cornerstone for “Mad Apple.” Painter said his company is working on upwards of 100 ideas every year. But this one stuck because it found a beautiful, and conveniently unoccupied, theater.

“To be honest, that space, the old Zumanity Theater, is my favorite space in Vegas,” Painter says. “So I thought, if there is ever an opportunity to produce a show in Vegas, it would be in that room there.”

The venue is seated at 1,151 capacity, about the maximum for “Zumanity.” The difference is in its staging. A bar doubles as the main stage, where performers will be showcased. Tall cases of booze are at the back, with the bar set in a semi-circle. The stage’s original thrust has been moved closer to the audience and connects with the bar and stage, giving the show multiple performance platforms.

“You can walk up to and get a drink — the central stage is a sort of circular bar — and then the top of the bar comes down and makes the stage,” Painter explained.

The stakes are high for “Mad Apple” as Cirque works to maintain its position as the city’s predominant production company. The long-standing Strip institution battled through a companywide shutdown in March 202o, to be rescued by a group of new investors in November 2020. Numbers have been erratic since the company’s pandemic reopening, with “O” and “Mystere” performing strong business but midweek ticket sales at “Love” and “Ka,” which have reportedly dipped to 30-percent capacity during the week, are an ongoing concern.

And Cirque has not launched a long-running production on the Strip since “MJ One” opened in 2013. Over the past decade, the company has fallen short with “Viva Elvis” and “Zarkana” at Aria, and “R.U.N” at Luxor.

In short, Cirque is due for a hit in Vegas.

Cirque du Soleil President Eric Grilly, the company’s ranking exec in Las Vegas, says that though “O” and “Mystere” remain strong, revenues from those shows are not shifted to support shows that are not so successful.

“Each of our shows has to stand on their own financially,” Grilly says. “We’ve got partners that have invested in the show, and it’s a business that has to have return on investment.”

Though “Mad Apple” is primarily a Works entity, it fits into the same company operation family as the traditional Cirque productions.

“The Works is creating this show for Cirque and MGM Resorts,” Grilly says. “This show will be operated as all of our shows in Las Vegas are operated. The same teams will be involved in all of our daily shows and running the show after it launches.”

“I think there is a global awareness of New York as a destination and in the iconic representation of the Statue of Liberty, the Chrysler Building, the Empire State Building,” Grilly says. “The New York-New York property is encompassing so much of that skyline that represents New York, I think the connection is fairly easy for us to make.”

Even so, some of “Mad Apple’s” performances can play anywhere, in the form of stand-up comedy. Brad Williams is the little-person comedian who performs where “Zumanity” emcee Edie once towered over the scene. Williams cuts to the quick in delivering material about his dwarfism and how his absence of height affects his daily life.

“I’m pretty sure it is every dwarf’s destiny to end up in the circus,” Williams says. “That’s what my parents told me when I told them 18 years ago I was getting into show business.”

Williams has appeared on “Comedy Underground with Dave Attell” and all the network late-night talk shows. He carries substantial responsibility as the primary comic in “Mad Apple.”

“Simon contacted me and told me he had been watching a lot of videos of stand-up comics, and when he saw my video was just like, ‘That guy! That guy!’ ” Williams says. “And to be honest, if he had brought this to me in 2019, right before the pandemic, I probably would have said no, just because I was touring. But now is the perfect time because I feel like this is like the comeback, where everyone’s really excited to get back out there to see live shows.”

Also cast for the opening run is Chris Turner, a rare British rapper and improv comic. Turner was cornered by Painter after a set at The Comedy Cellar in New York last year and offered a role in “Mad Apple,” on the spot.

Turner is a founding member of the highly regarded improv troupe in the U.K., and has amassed more than 35 million views on YouTube.

Turner takes terms called from the audience and turns them into freestyle rap songs. He prefers complex, even arcane subjects, his rules being no food, no animals and “nothing obvious.” During his appearance last September on “The Late Show With Stephen Colbert,” Turner rapped a number from such suggested topics as hoarding toilet paper, the Oscar won by Colbert bandleader John Batiste, weird baby names on Mars and people fighting over Pokemon cards at Target.

“This all started with me in my bedroom, listening to Dr. Dre, Snoop Dogg and Eminem, and I would make up my own raps,” Turner said last week. “Then I was in Boy Scouts and we’d be hiking on these five-day expeditions, just like six guys in the mountains. Everyone’s morale is down and I just created these little rap songs about what was happening.”

Turner’s improv rapping is not the only music in “Mad Apple.” Eddie Cole (known in the show as Xharlie Black) great-grand nephew of Nat King Cole, heads up the show’s vocal lineup, which Painter culled from a nationwide search of singers. Cole is music director of a hip house band featuring a brass section and also boosted by audio tracks.

“Eddie is one of the greatest talents I’ve ever seen in my life,” Painter says “He’s a dear friend of mine. He wrote some of the music for “The Illusionists” show back in the day. The talent we have in this show is just ridiculous.”

One of the comics has a concern leading to the show’s opening.

“When I told my mom I was in a Cirque show, she was like, ‘They won’t make you wear a leotard, will they?’ ” Turner says. “And I’ve been promised I can wear normal clothes.”