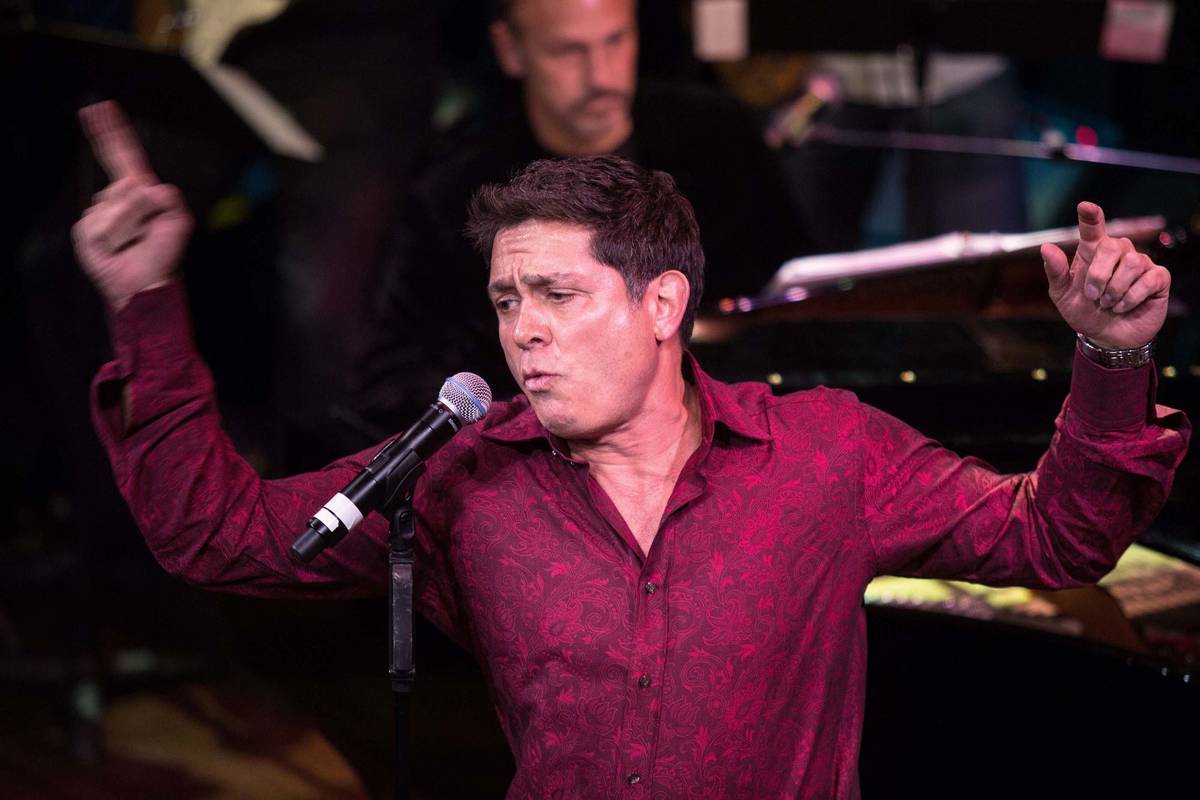 Keith Thompson performs during the Composers Showcase of Las Vegas at Cabaret Jazz inside The Smith Center in 2013. (Las Vegas Review-Journal) 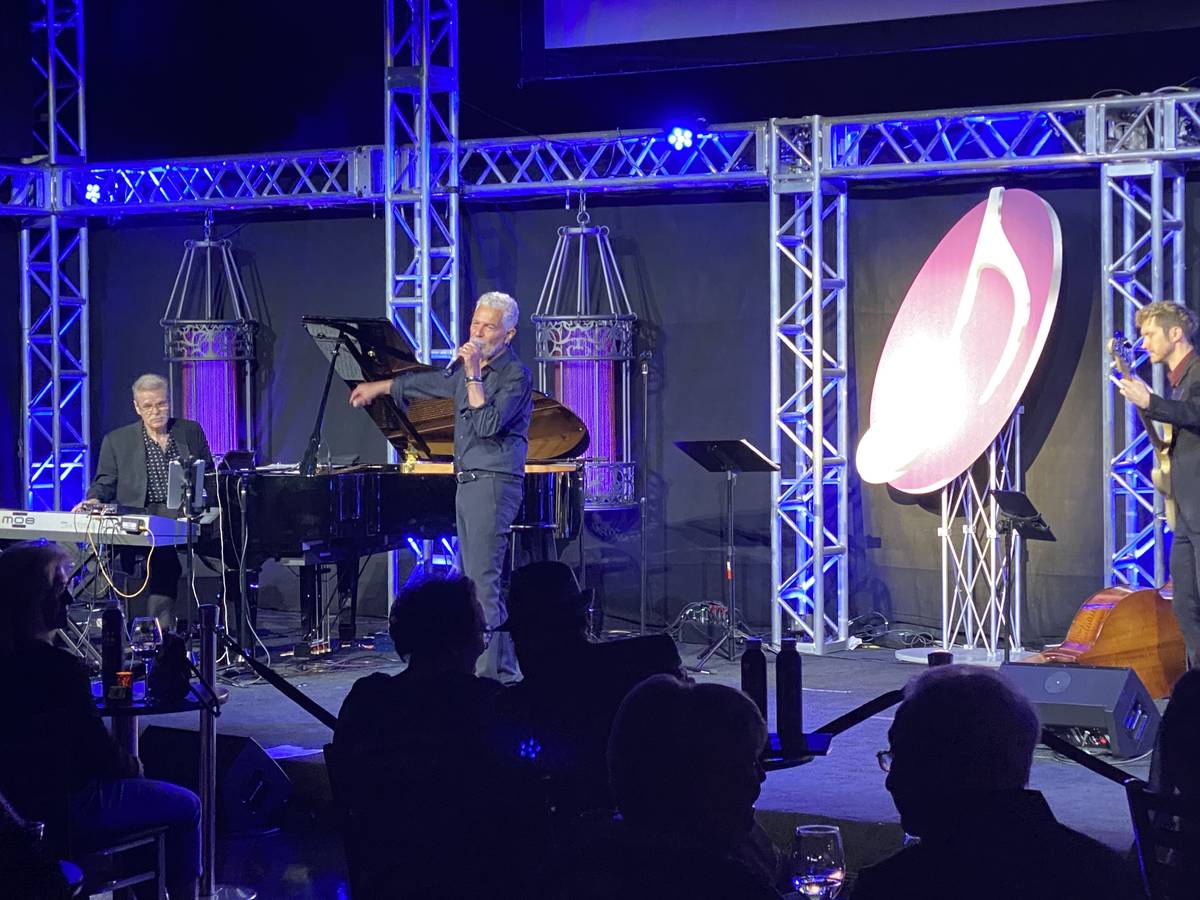 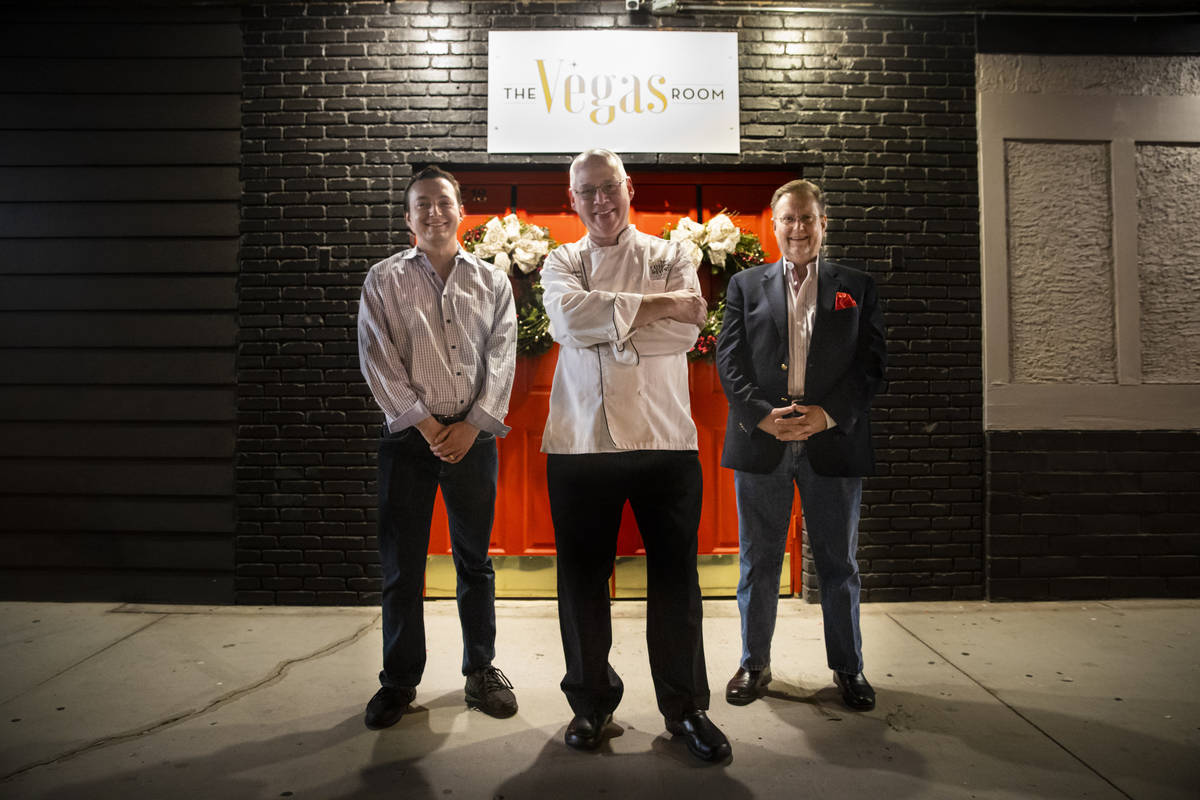 David James Robinson, chef and owner of The Vegas Room, poses for a portrait with Sean Stephenson, left, and Tom Michel before the opening of "A Vegas Room Christmas" at The Vegas Room in the Commercial Center off Sahara Avenue near Maryland Parkway in Las Vegas on Tuesday, Dec. 1, 2020. (Chase Stevens/Las Vegas Review-Journal) @csstevensphoto 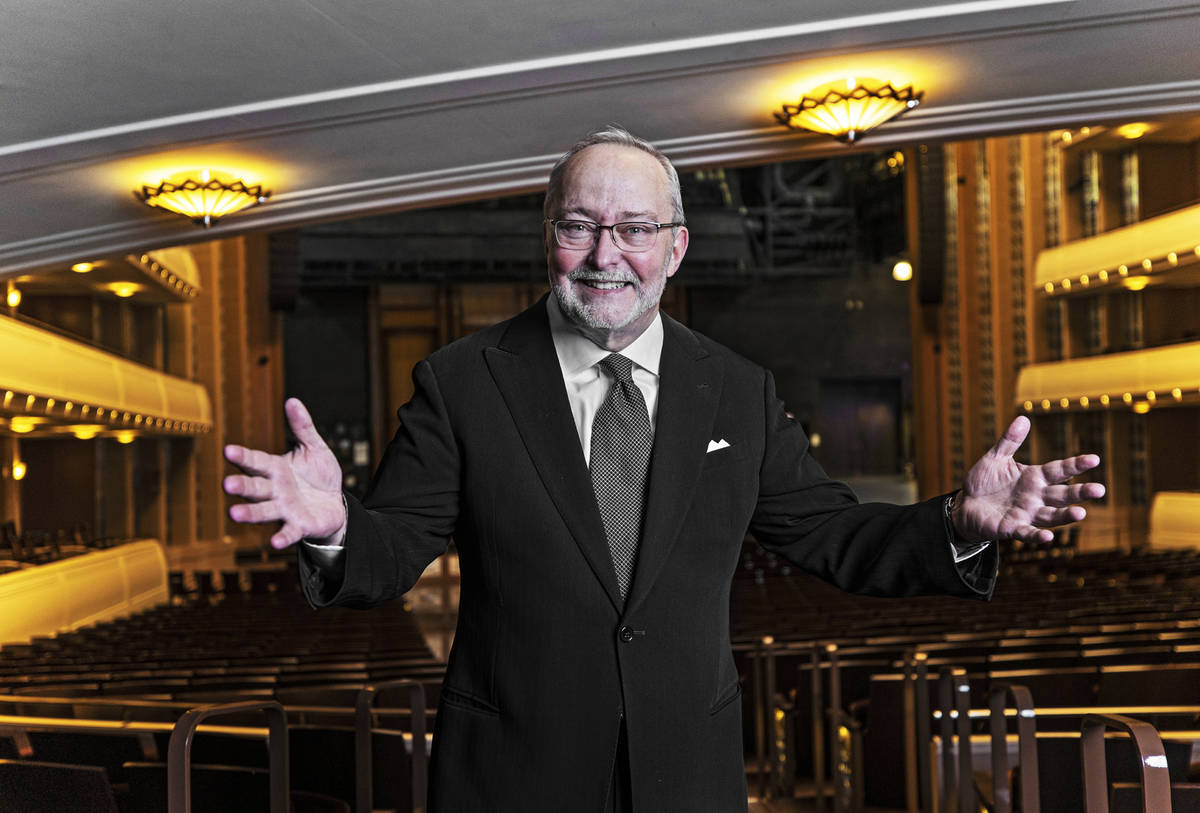 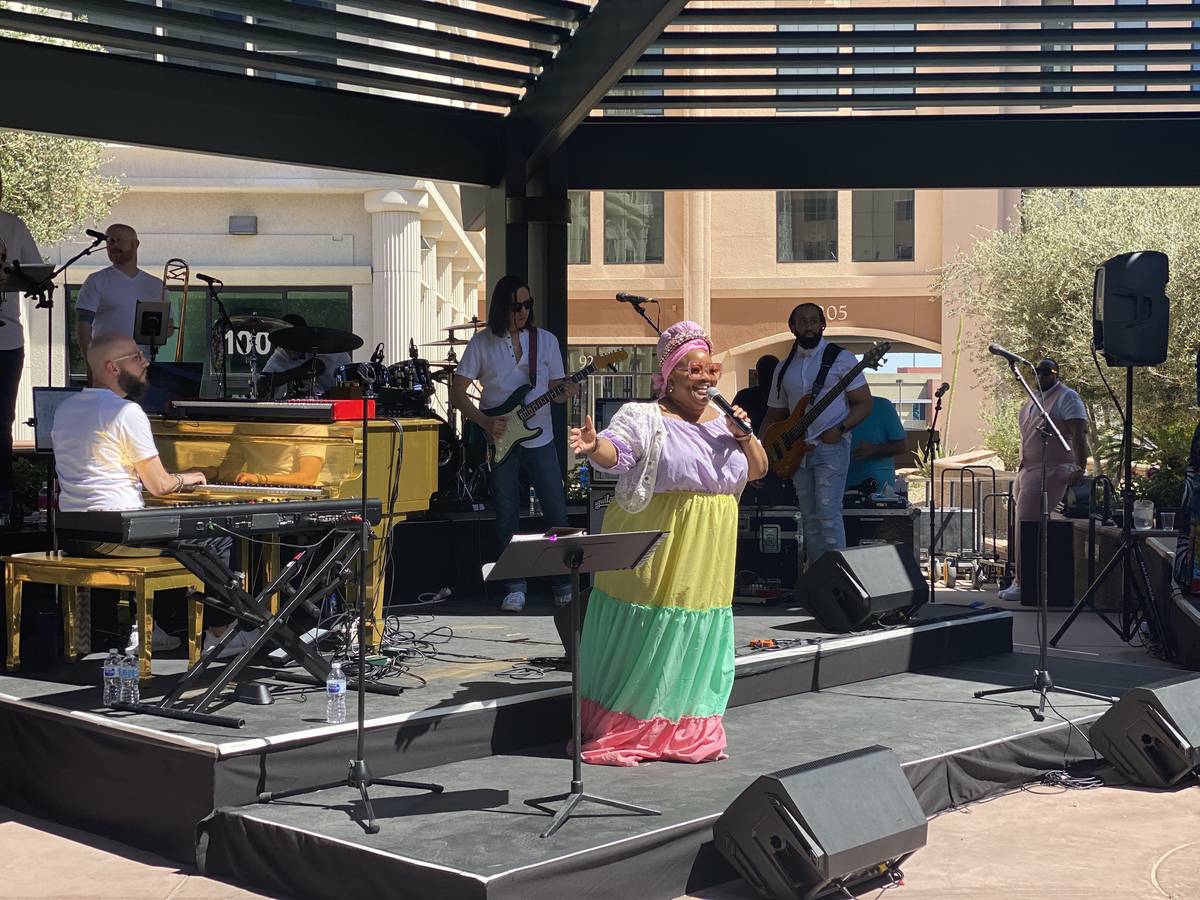 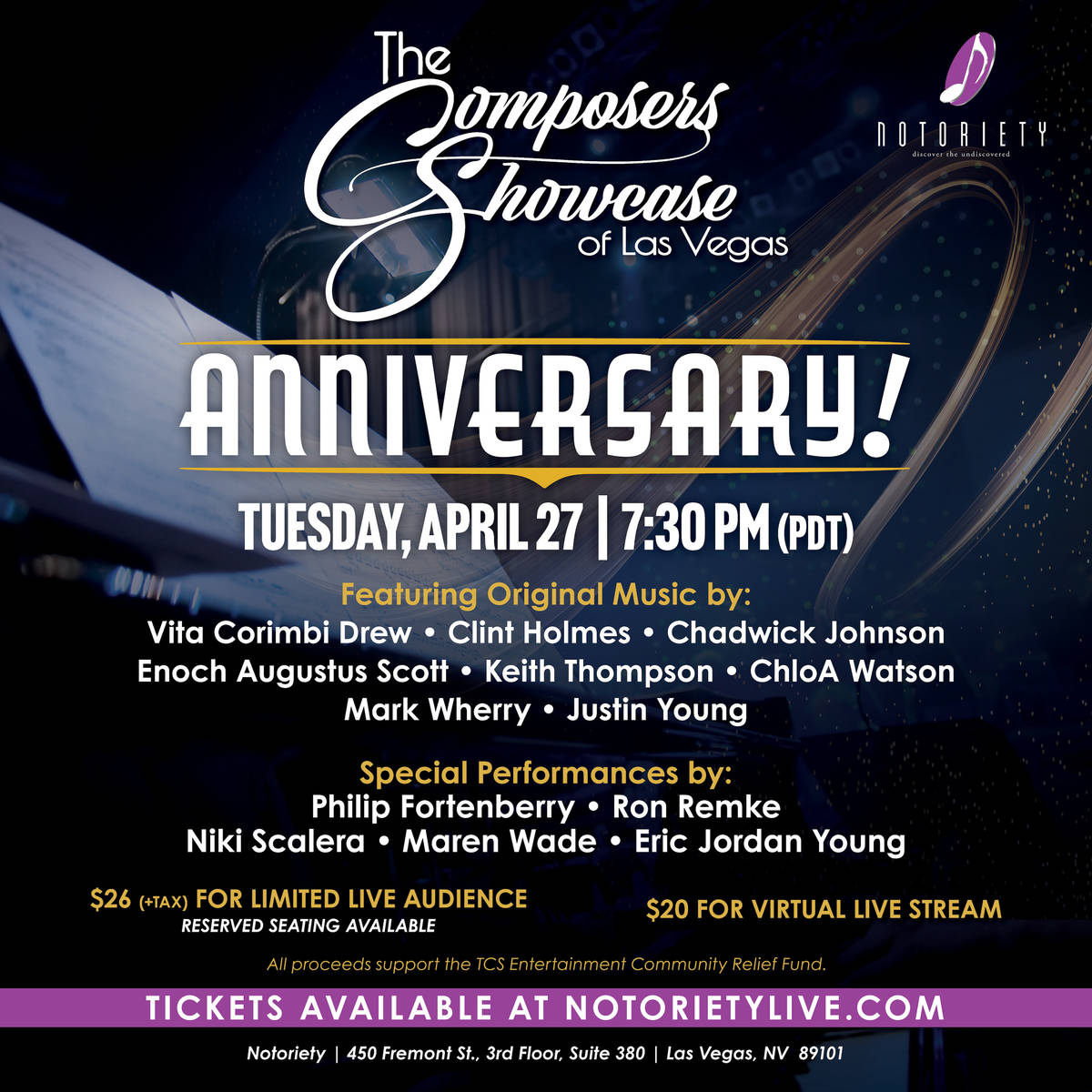 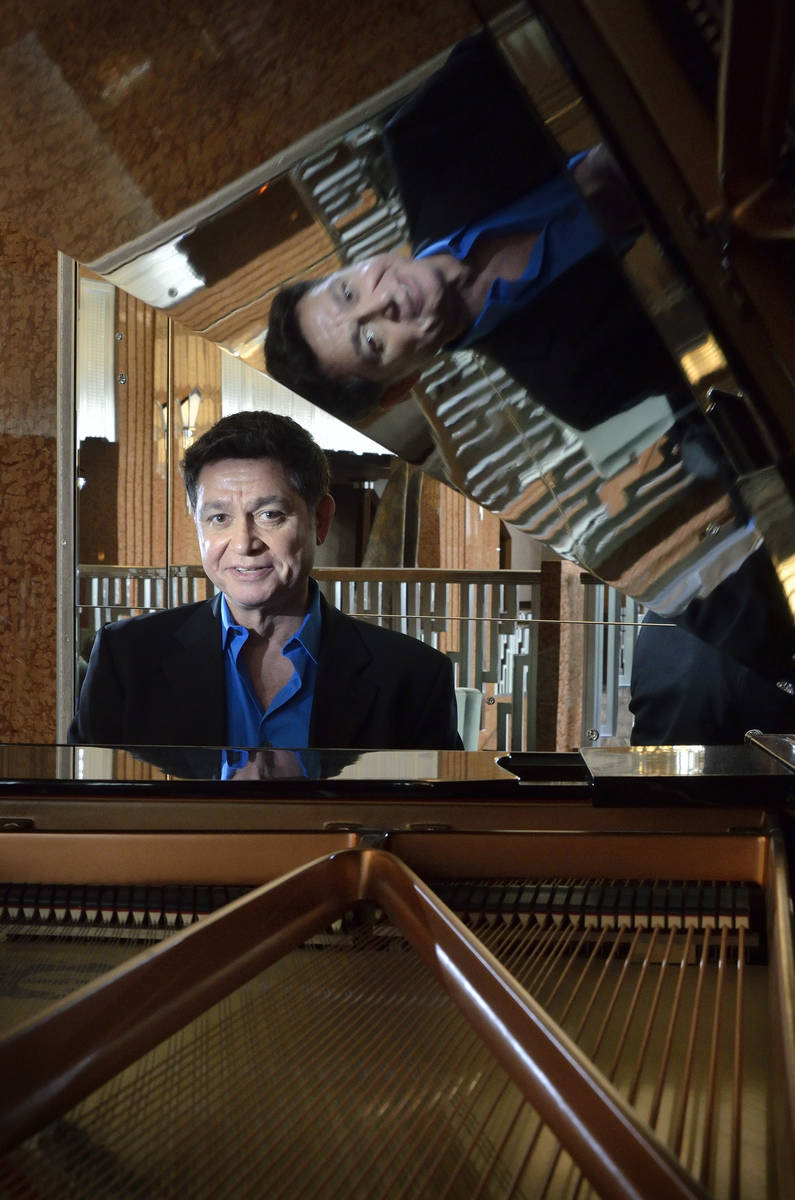 Keith Thompson, “Jersey Boys” conductor and co-composer of “Idaho! The Comedy Musical” is reflected in the lid of a piano at the Smith Center for the Performing Arts at 361 Symphony Park Ave. in Las Vegas on Friday, May 6, 2016. (Las Vegas Review-Journal) 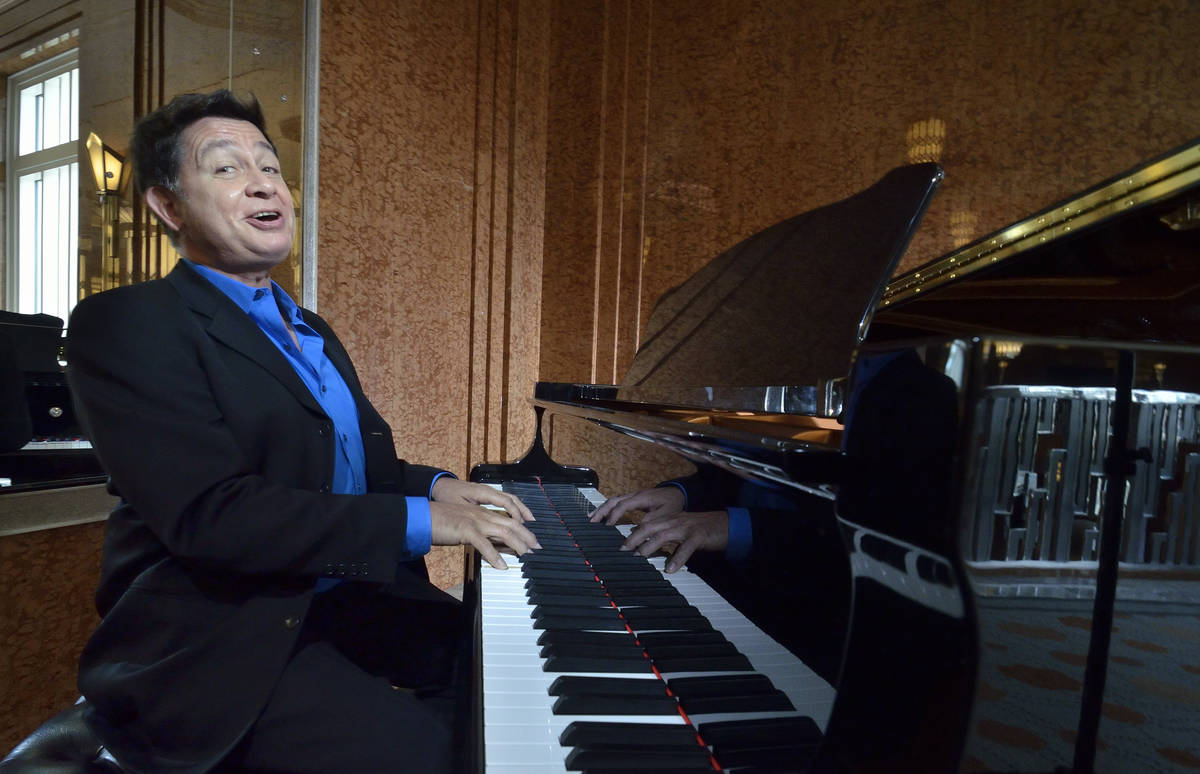 Keith Thompson, “Jersey Boys” conductor and co-composer of “Idaho! The Comedy Musical” performs a song from the musical at the Smith Center for the Performing Arts at 361 Symphony Park Ave. in Las Vegas on Friday, May 6, 2016. (Las Vegas Review-Journal)

The differences between Neonopolis on Fremont Street and The Smith Center for the Performing Arts at Symphony Park could fill a binder.

There is no axe throwing at Smith Center, for instance. No karaoke bar or tattoo studio, either.

But both venues have hosted The Composers Showcase of Las Vegas. As we well know, TCS has played Myron’s Cabaret Jazz from its opening in March 2012 through the room’s COVID lockdown in March 2020.

Most recently the series has been headlining Notoriety at the top level of Neonopolis.

With no plans to reopen Cab Jazz until September, could Notoriety serve as The Composers Showcase’s next long-term home?

Of course it could. Will it? Not likely.

“I plan to be back at Cab Jazz, even though there are a lot of people who think I shouldn’t, because it has been closed for so long and we’ve had a lot of other places step up for live entertainment,” TCS co-founder Keith Thompson says. “But really, there is no better place for this type of show than Cabaret Jazz. You can’t do better than the Smith Center.”

Smith Center President Myron Martin is unambiguous about his support of The Composers Showcase. He wants it back at Cab Jazz. He’s also an advocate of Vegas entertainers, concepts and opportunities.

“I’m glad entertainers have found other places to ply their craft, when Cab Jazz hasn’t been able to be open,” Martin says. “I’m supportive of all these places that are creating a cabaret environment, for lack of a better term. I like it. It’s good for performers, and it’s good for people who just want to go out and see shows.”

Notoriety is a club that has, to use Thompson’s term, stepped up. Ken Henderson’s multivenue destination is fast establishing itself as Neonopolis’ anchor tenant. It helps that all-star shows such as TCS have drawn the entertainment community to the venue.

Thompson emcees, as usual, with guest host Clint Holmes and original music from such TCS returnees as Vita Cormibi Drew of “Menopause The Musical” (who was featured at Show No. 2 in April 2006), Enoch Augustus Scott of “Zombie Burlesque,” Vegas vocalist Chadwick Johnson and ever-mirthsome TCS vet Mark Wherry of the College of Southern Nevada (he and Scott have teammed on the Vegas “Tiger Thing” satire project).

Having attended the second Composers Showcase, at the since-close Suede Restaurant, and nearly every one since, we can vouch for the series’ flexibility. TCS has hopscotched around the valley in its 15 years, from Liberace Museum to Creative Studios to Garfield’s on the Lake at Desert Shores and finally Cabaret Jazz.

Thus, the possibility of moving TCS around, or pinning it to a new room, has been tantalizing, as Cab Jazz has more company than ever among off-Strip music clubs. Such venues as The Vegas Room (and the more spacious Nevada Room) at the Commercial Center, Italian American Club, and Copa Room at Bootlegger Bistro are among the live-music centers that have prospered as Cabaret Jazz has been dark.

The Space, which has been open for four years, has also picked up business as COVID restrictions are relaxed (Tony Award-winner John Lloyd Young, returning May 1, is a recurring headliner there). Proprietor Mark Shunock has Original Chaos, a classic-rock band fronted by Dai Richards of “Tenors of Rock” rolling in Friday night to play all of “Hotel California.”

Even Holmes, who was Cabaret Jazz’s first resident headliner, has been performing at Notoriety in his monthly “Regeneration” series. The Cocktail Cabaret, which Thompson co-produces, is a revue that has played Cleopatra’s Barge at Caesars Palace and seems tailor-made for Cab Jazz. Instead, the show is playing IAC Showroom on Thursday.

Whether the success of such off-Strip venues can sustain ongoing success depends on the post-COVID market. Cabaret Jazz will reopen. Expect it to fill quickly as top-level Vegas entertainers will invariably book shows there. The Strip will be reactivated, offering its own challenges to smaller venues.

If the pandemic has taught us anything it’s be wary of forecasting public gatherings. For an early verdict, check back in the fall, maybe at The Comoposers Showcase.

Skye Dee Miles’ myriad friends in Las Vegas are descending on The Space on Monday night. “For The Love of Skye” is a boost to the popular vocalist who has, as we say, been through some life in recent weeks. Simply, she gives a lot, so we give back.

David Perrico’s Pop 40 is the house band, and the Boom Boom Room Dancers are also on the bill. As we say, come for the Holmes, stay for the Boom Boom.