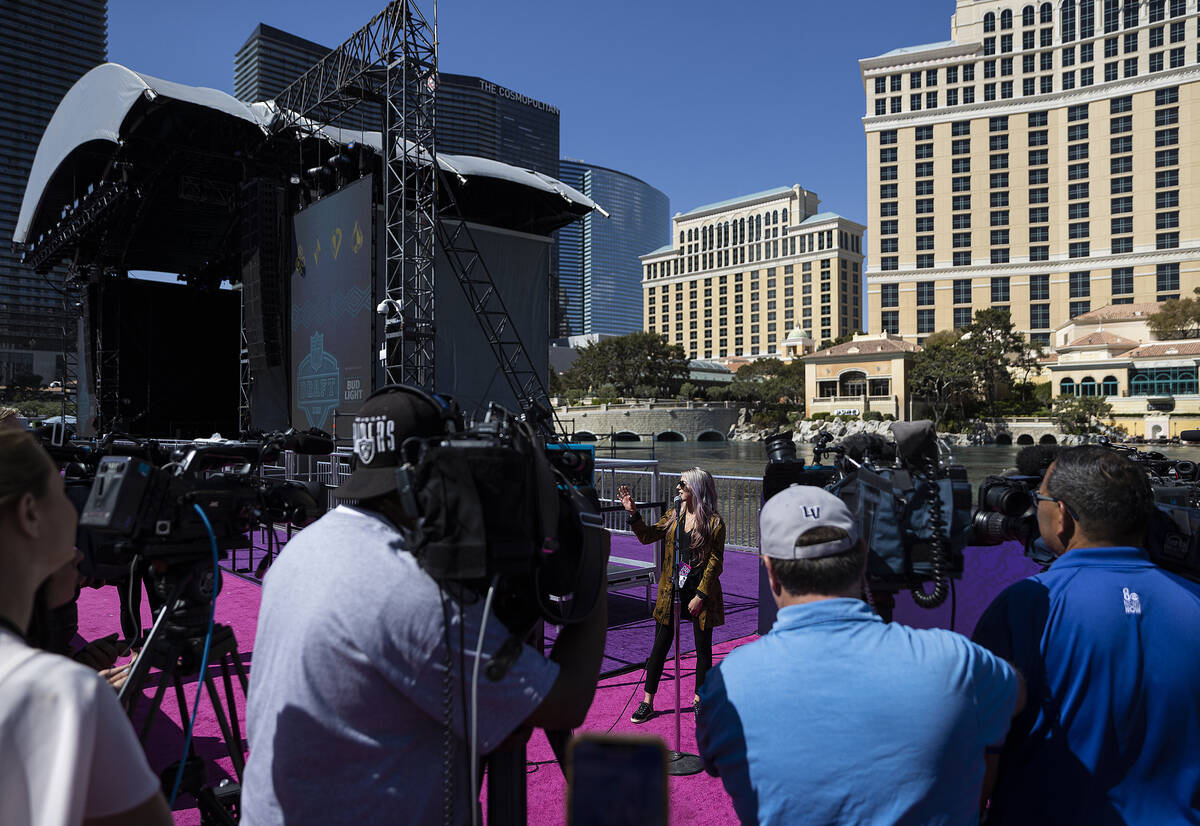 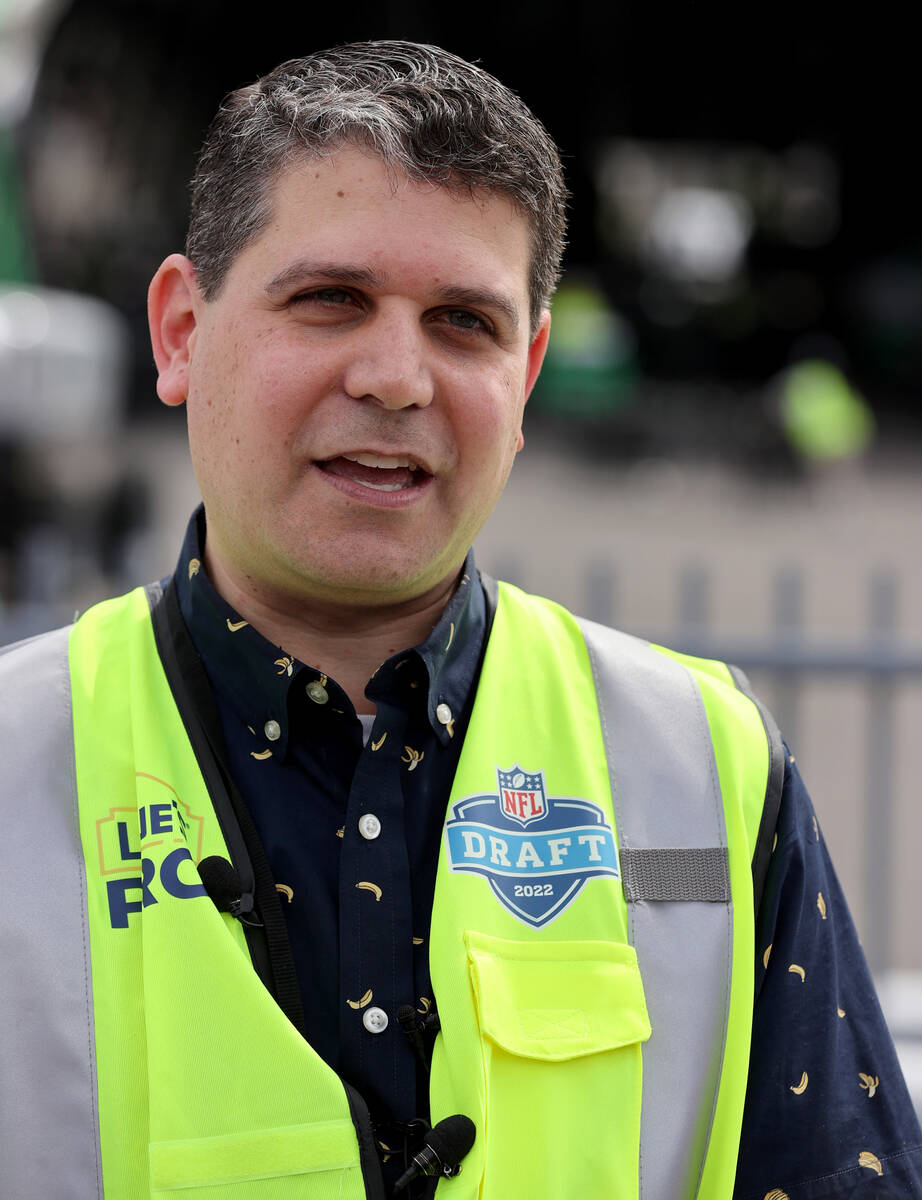 NFL Senior Director of Event Operations Eric Finkelstein talks to the news media at the NFL Draft Experience under construction behind The Linq Hotel in Las Vegas Monday, April 18, 2022. The interactive football theme park, which will be open all three days of the NFL Draft April 28-30, will give fans the opportunity to participate in immersive exhibits, sponsor activations, take photos with the Vince Lombardi trophy and shop exclusive NFL merchandise. (K.M. Cannon/Las Vegas Review-Journal) @KMCannonPhoto 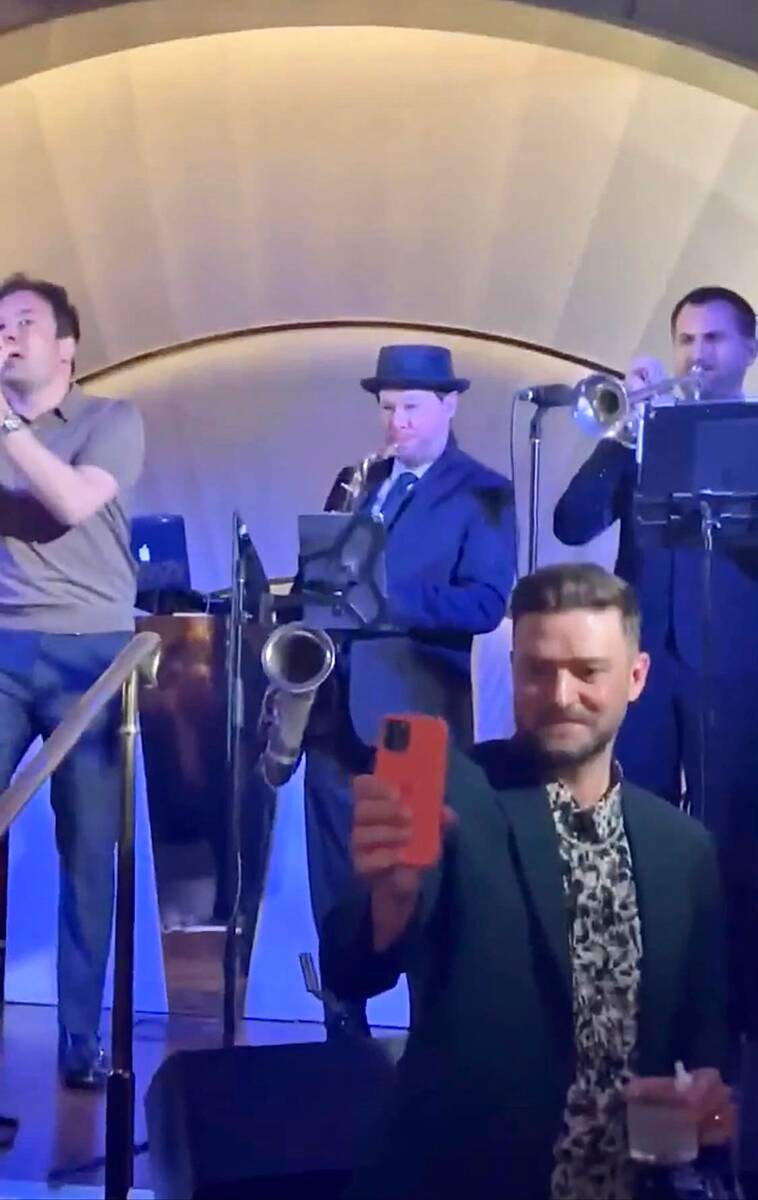 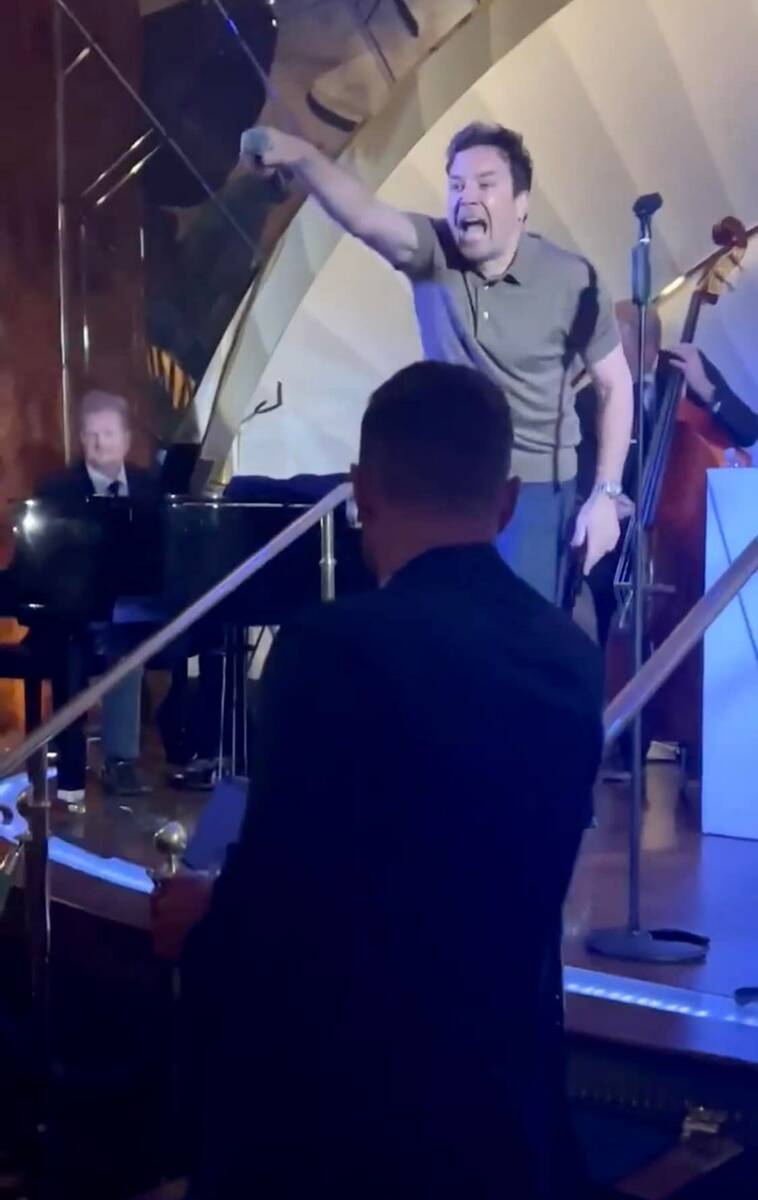 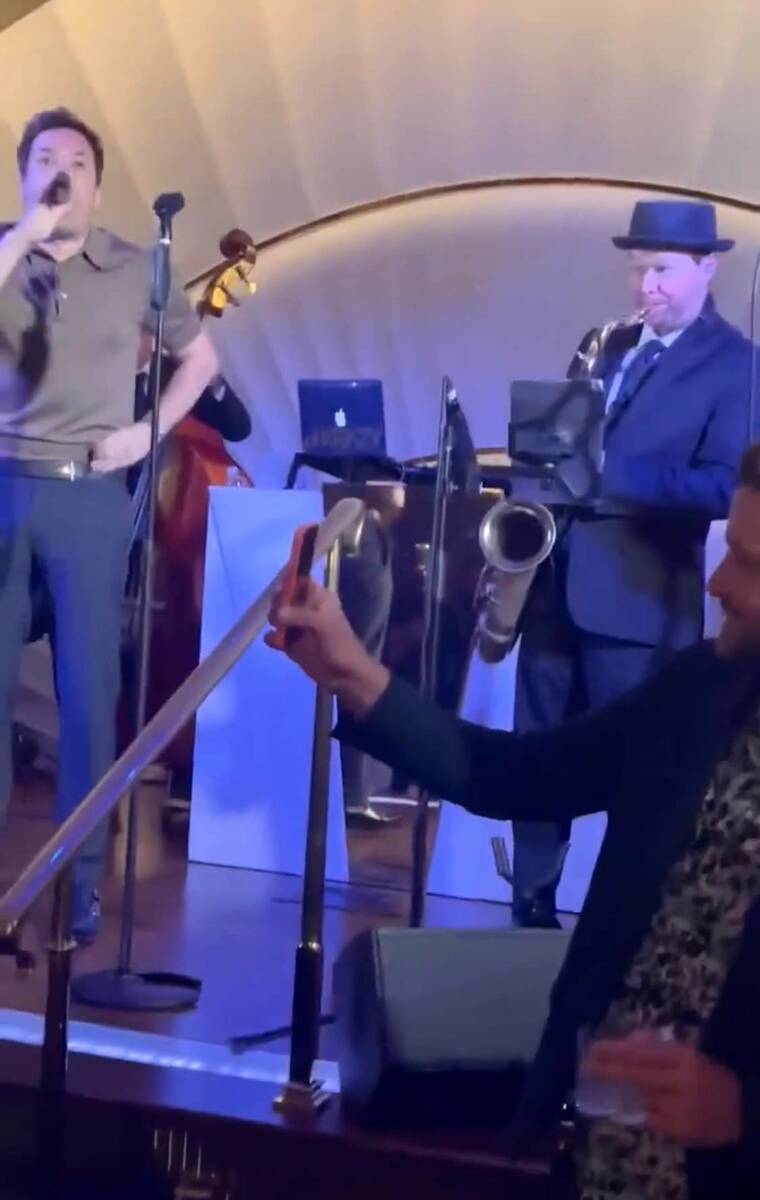 Jimmy Fallon sings with sax man Rob Stone at his side at Delilah at Wynn Las Vegas on Saturday, Apr. 23, 2022. (Rob Stone)

Around here, we know the difference between a one-off and a residency. Touring acts often sit down later in Las Vegas for a longer stay.

Is the NFL draft such a show, destined for an extended Vegas engagement? Maybe.

“We are always looking at what makes the most sense for the draft, and where we can bring it, move it around,” said Kelsey Pietrangelo, NFL manager of live event operations. “We plan a few years out, and we are always talking about, ‘Where is the next city?’ The options are endless.”

The draft’s debut in Las Vegas has yet to come off, but we feel greedy. The draft is already feeling like a rite of passage on the Strip. The red carpet stage at Lake Bellagio is the largest platform ever on that iconic water effect.

The NFL Experience fan attraction and NFL Draft Theater behind the High Roller and Linq Promenade look like they can be taken down and returned annually. The theater, especially, could stand as a permanent venue for Caesars Entertainment concerts, festivals, viewing parties or any variety of mass gathering.

Speaking on the Bellagio carpet (which is magenta-purple and not red), Pietrangelo added, “That doesn’t mean it will never be here again, or couldn’t be here two years in a row.”

Next year’s draft is booked for Kansas City, Missouri.

Pietrangelo says cities can look at locking in the draft the same way they pursue Super Bowls. And Las Vegas has met that objective, hosting in 2024.

“We hit the ground here last week and went over to Allegiant, and just looking at the stadium itself and how it operate is impressive,” Pietrangelo says. “It’s an amazing stadium. We’ve been impressed, looking at how pedestrians and vehicles can move around Las Vegas for a Super Bowl.”

Pietrangelo has been with the league for seven years. Her tenure covers the most recent drafts, last year in Cleveland and the 2019 draft in Nashville, Tennessee, the most recent full-capacity selection festival.

Not a Fremont Street Experience

The NFL first scouted Vegas as a possible draft location in 2017. The league had announced the Raiders would be moving in from Oakland. But Las Vegas could have been considered as a draft host even without an NFL team.

“It wasn’t conditional on having a team. It wasn’t a prerequisite at all,” Eric Finkelstein, the league’s senior director of event planning,said during a first look at the NFL Draft Theater. “We certainly want to bring it to the fans in the NFL markets, without question. But we’re not limited to those cities.”

Finkelstein said his team also reviewed sites downtown, including the Fremont Street Experience and Downtown Las Vegas Events Center. Finkelstein was impressed by the variety of Vegas locations. But the league wanted the party to be held completely on the Strip.

“There are a lot of places we go, to be honest, where there is one option,” Finkelstein said, as construction equipment could be heard in the background. “Here, there are many. So, it wasn’t easy to figure out where it made the most sense. We looked at Fremont Street. We loved the atmosphere, the look and feel of it, and of course the LED. We just felt this space gave us the most flexibility, because of the additional elements that are part of it beyond the theater.”

The NFL Draft Theater is closer to the red carpet stage, of course. And Finkelstein said that being in the heart of the Strip, said “was definitely a factor, being right in the middle of things.”

Terry Fator is hitting the Bar at Times Square on Thursday, after his show at Liberty Loft at New York-New York. The long-running Strip headliner is planning to perform such pop-ups, unannounced, as his Liberty Loft residency continues.

Fator will be singing in his own voice, returning to the days in the mid-1980s when he fronted a rock band. He also hopes to grow out the concept, inviting fellow Vegas entertainers into the scene.

“I’d love to open it up to other singers, guest stars,” Fator says. “I’d love to have Michael Grimm come in and do a set, for instance.” Fator and Grimm are both Las Vegas performers who have won “America’s Got Talent.” But the two have never met. As Fator says, “That is amazing to me.”

An ‘SNL’ skit, on the Strip

Yep, that was Jimmy Fallon jamming with the band at Delilah at Wynn Las Vegas on Saturday night. Yes, that was Justin Timberlake standing in front of the stage taking selfies. Timberlake and his crew took over the club after his celebrity golf tournament at Wynn Country Club.

Column faves The Windjammers, the city’s pre-eminent yacht rock band, will return to Chrome Showroom at Santa Fe Station at 7 p.m. (doors at 6) Thursday. Sail in, and no cover.