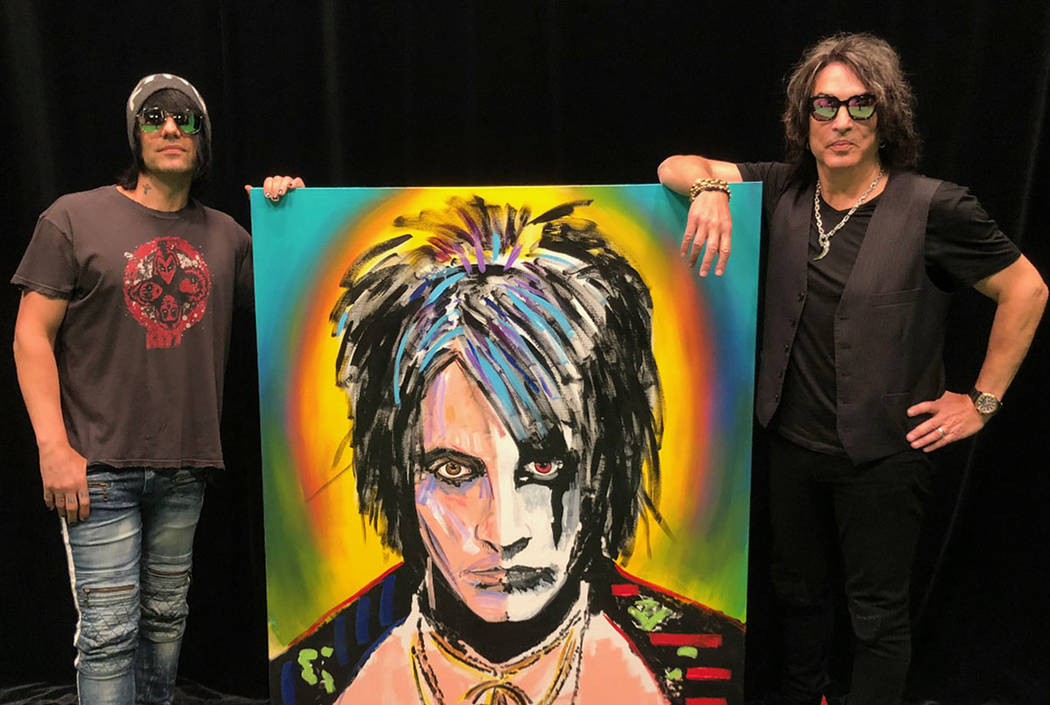 Criss Angel and Paul Stanley are shown with the "Split Face" painting Stanley has created and donated to Angel for display at his new theater at Planet Hollywood. (Criss Angel) 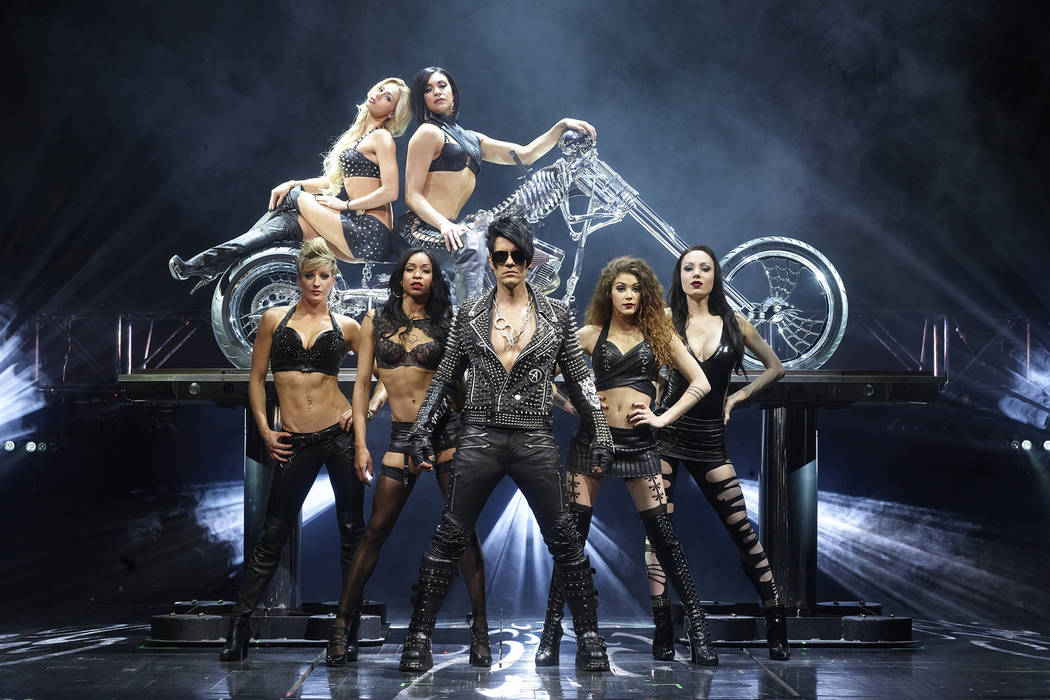 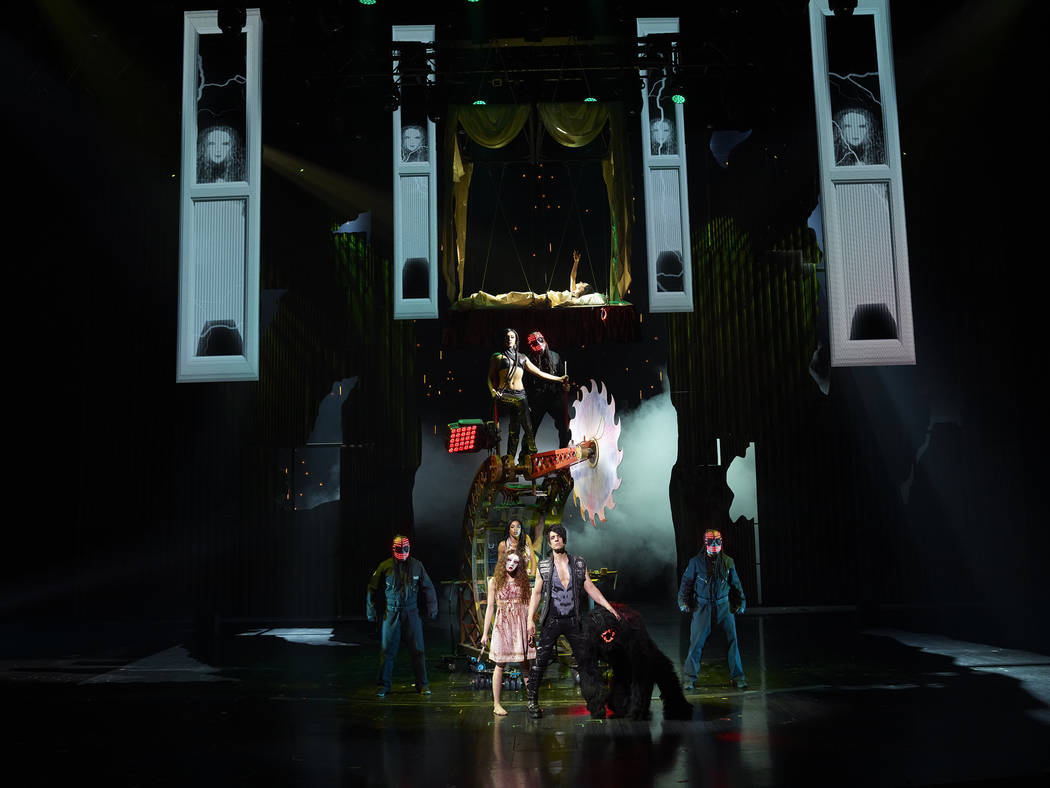 It’s the night of Criss Angel’s finale at Luxor, and I ask if he’s been counting the days until he leaves the property.

“There you go,” Angel says, grinning. He’s unshaven, donning a hoodie and jeans, in this informal final interview before he closes a decade-long run at Luxor.

The long-running headliner is in living in the now, not particularly interested in discussing his future, the Dec. 19 opening of “Criss Angel Mindfreak” at Planet Hollywood. He’ll wait to set loose those details, similar the dozens doves he releases over over his audience each night.

I lost it tonight during my last show… You won’t Believe what Johnny Crisstopher said #love … New Show Begins @phvegas 12.19.18

“I don’t want to talk about Planet Hollywood now, because I don’t want to seem disrespectful for what is happening now, and I want to allow this incredible 10-year-plus celebration to take place,” he says. “You know, I’m never the guy who takes time to stop to smell the roses. But it’s all about doing that tonight … I’m just very grateful to Cirque, and to MGM Resorts, for this unparalleled opportunity.”

It was another lifetime ago for Angel when he opened his “Believe” production for previews on Sept. 26, 2008. He was originally a creative partner of Cirque du Soleil, an international star through his “Mindfreak” TV show and the first showman ever to star in a Cirque production. But the much-hyped production famously staggered from the gate, and was summarily skewered by critics. Angel committed some public missteps (once threatening to punch out then-Review-Journal columnist Norm Clarke at the Luxor valet, for instance). Entertainment observers, and a large complement of media members, wondered if Angel would survive even a year at Luxor.

“I have learned, over the years, from my mistakes,” Angel says in recalling those days. “I think that I sort of created the situation for the media to perceive me a certain way, and I take responsibility that I did that to myself …Look, you want to be received well by everyone, but sometimes that’s impossible. It’s a lifelong lesson for me, but ultimately I’m in a great space right now.”

It was a five-minute segment that shaped Angel’s career on the Strip. He re-calibrated “Believe” to better suit his image (cultivated impressively on his “Mindfreak” A&E series) and advance his own vision of stage production.

“What was happening, I was playing somebody else, I wasn’t Criss Angel, and it was much more like a Broadway show for people who were coming in to see ‘Mindfreak,’ ” Angel says. “They were not seeing it. I always wanted to do what I wanted to do, from Day 1, and I finally was given a chance to show a five-minute version of my own show.”

Angel did, in fact, produce a five-minute act that showed him in “Mindfreak” context, and sold it to Cirque officials, among them company vice president and co-creator Gilles Ste-Croix. It was Ste-Croix and then-director Serge Denoncort (a name almost entirely forgotten in Angel’s decade-long Strip residency) who were primarily responsible for the original “Believe” concept.

“This was a few years into the run, and Gilles said to me, ‘Do what you want to do, for five minutes, and if it’s a good direction, we’ll do it,’ ” Angel recalls. “Afterward, Gilles said, ‘What I realized is what you’ve done is a Criss Angel show with Cirque You have our full support, transform the show into what your vision is.’ ”

That vision evolved into “Mindfreak Live,” which premiered in 2014 at Foxwoods Casino Resort, where Angel was close to the late hotel chief executive officer Felix Rappaport, who was head of Luxor when Angel opened there. “Mindfreak Live” debuted on the Strip in July 2016, and Angel rode that show to the end of his 10-year contract at Luxor.

Known to routinely work 18-hour days, Angel has mostly teased to what’s next for “Criss Angel Mindfreak.” Expect him to maintain his ever-rocking stage image. His collection of bikes are on display, under glass, on the casino floor and on the mezzanine level across from his theater. Paul Stanley of Kiss has painted a portrait to be exhibited near the entrance. Jonathan Davis of Korn has lent two of his new solo songs, What it Is” and “Basic Needs,” to the show. The theater is being overhauled with LED screens, and Angel promises 20 new effects among 75 illusions onstage.

And the man who extols, “Life is death without change,” is assembling a new lineup for Planet Hollywood. Sunday’s show was the last “Mindfreak” for such artists as “The Maestro” Mateo Amieva, moving on with his Peti & Taller “Hooligans of Magic” comedy/magic show at Hooters; comic sidekick Penny Wiggins is developing a children’s magic show called “The Aunty Penny Show”; Chloe Crawford is off to perform on Broadway in “The Illusionists — Magic of the Holidays,” which runs at the Marquis Theatre from Nov. 23 to Dec. 30. None other than Shin Lim, reigning champion of “America’s Got Talent,” is in that lineup.

Angel is moving forward with a greater personal investment in his next production, through his Angel Productions Worldwide Incorporated (APWI) company, which he established in 1989 with his father, John Sarantakos. Base Entertainment and Caesars Entertainment are on board as production partners, too.

How we land it. @crissangel closes a decade @luxorlv memorable, emotion-filled night …

Angel, who turns 51 the night his new show opens for preview, is today a family man. He has been on the scene with his “significant other,” Shaunyl Benson, regularly for more than a year. The couple’s 4-year-old son, Johnny Crisstopher, has been more in the spotlight after fighting a rare form of leukemia since he was a year old. Their second child, to be named Xristos Yanni, is expected in January, around the time “Criss Angel Mindfreak” celebrates its formal premiere.

“Personally, I’ve never felt better,” Angel says. “I have a beautiful child, a great relationship with Shaunyl, and another child on the way.”

Johnny Crisstopher is due for his final chemotherapy treatment Dec. 29. He is the inspiration for Angel’s H.E.L.P. (Heal Every Life Possible) charity foundation.

Johnny Crisstopher is ever-present in Angels’s world, and the little boy’s drawings of robots sit nearby on a coffee table. As Angel says, “I have chosen to reveal and Crisstopher, that aspect of my life’s trials and tribulations, as a way to use art to move people, and to shine a spotlight on a horrible disease. I want to raise money, raise awareness and to make it about kids while still entertaining audiences.”

As his time at Luxor reaches 0:00:00, Angel is asked about the future, and what he wants for himself and his family.

“Love, health and happiness,” he says. “If you have those things, you are the wealthiest person in the world.”