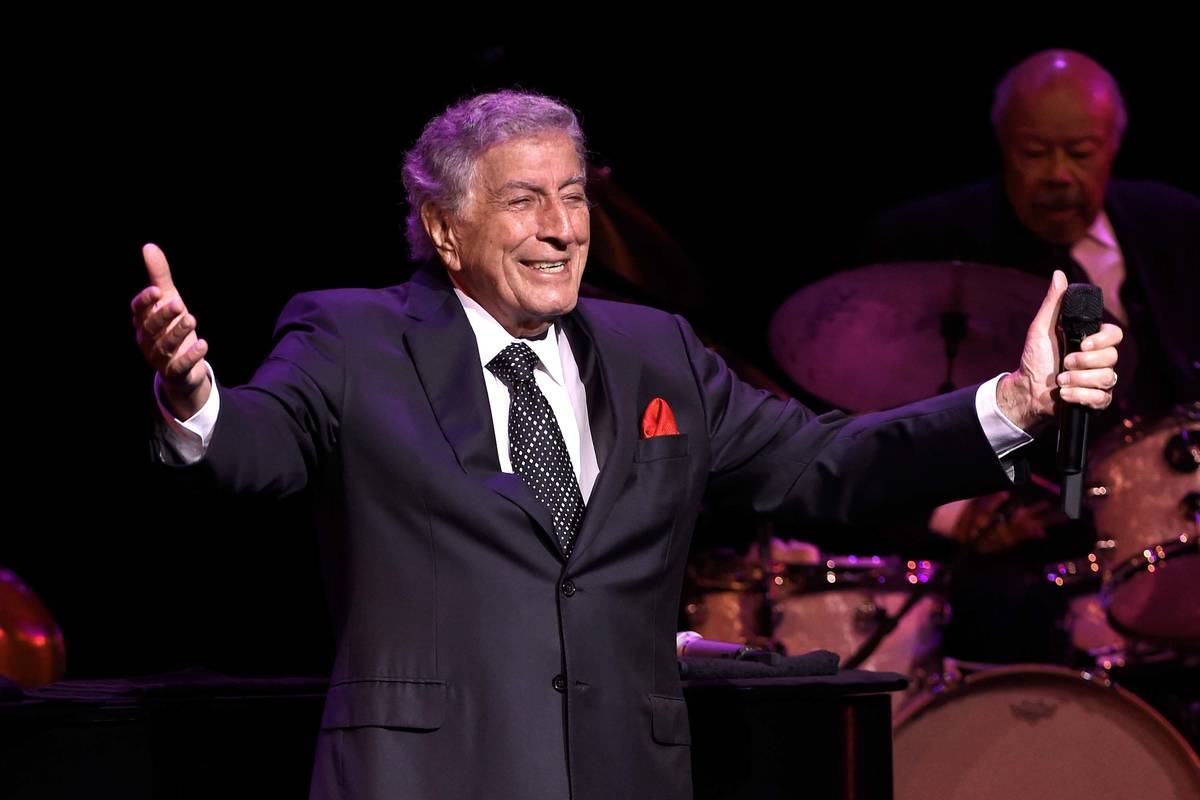 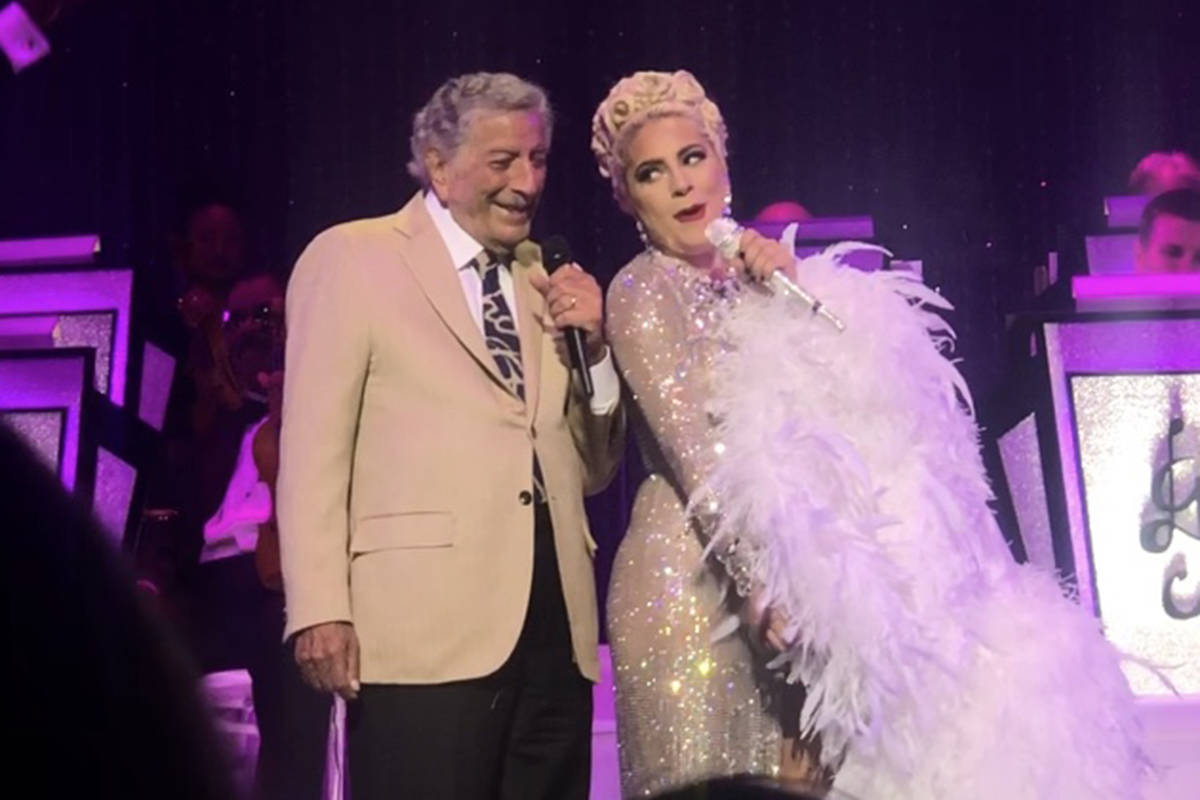 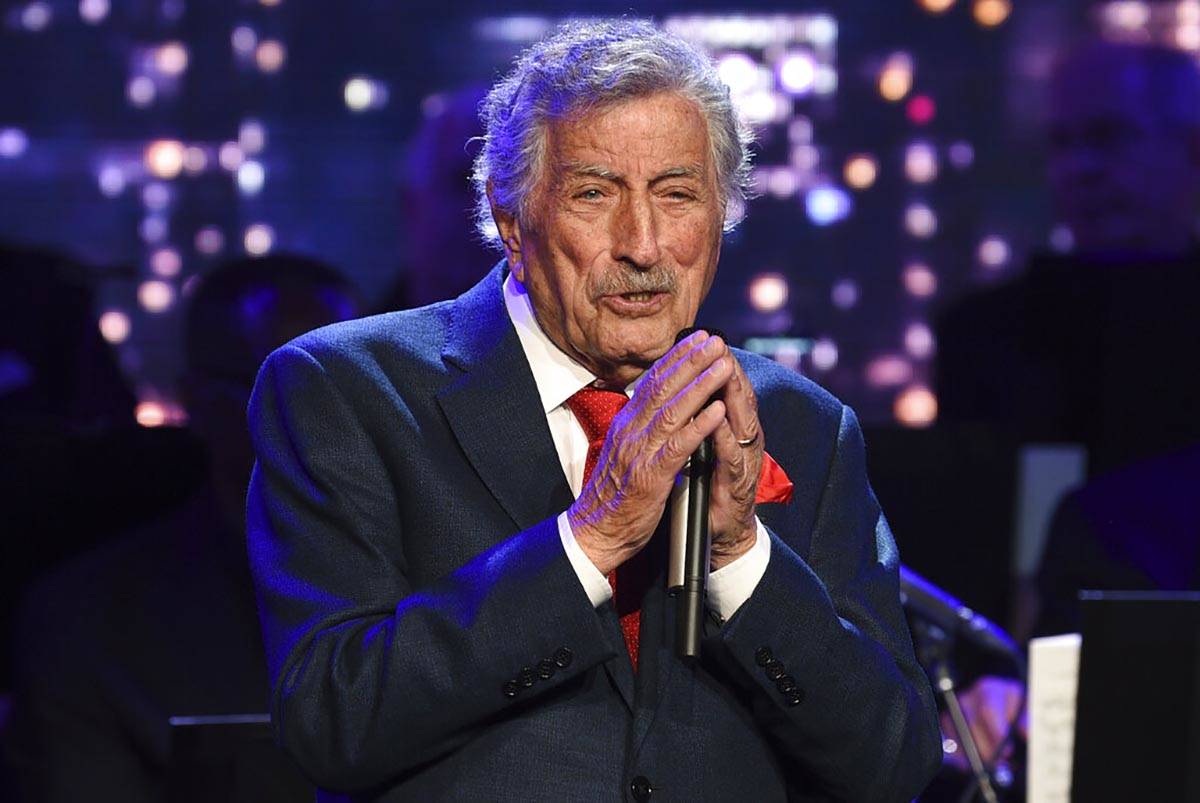 Singer Tony Bennett performs at the Statue of Liberty Museum opening celebration in New York on May 15, 2019. Bennett has been diagnosed with Alzheimer’s disease but the diagnosis hasn’t quieted his legendary voice. The singer’s wife and son reveal in the latest edition of AARP The Magazine that Bennett was first diagnosed in 2016. The magazine says he endures “increasingly rarer moments of clarity and awareness.” (Photo by Evan Agostini/Invision/AP, File) 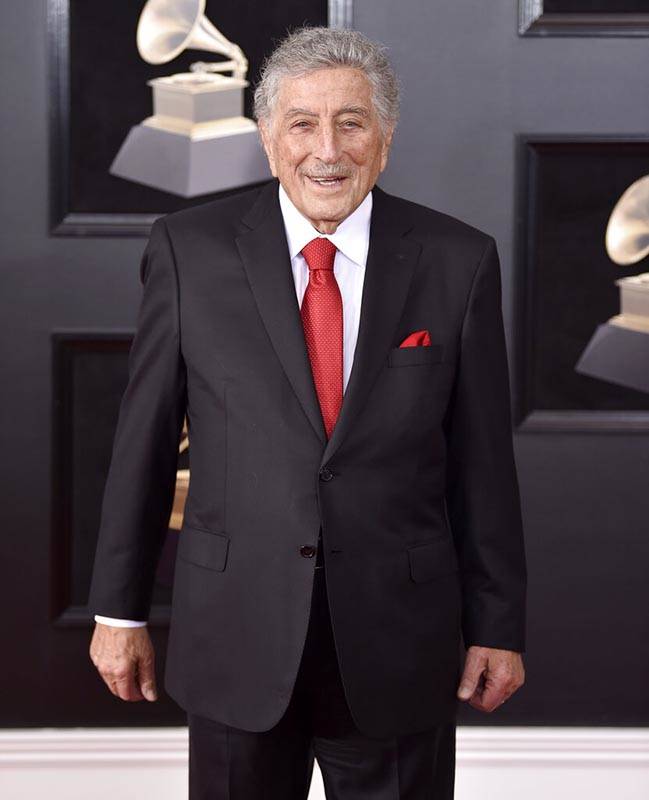 Tony Bennett arrives at the 60th annual Grammy Awards in New York on Jan. 28, 2018. Bennett has been diagnosed with Alzheimer’s disease but the diagnosis hasn’t quieted his legendary voice. The singer’s wife and son reveal in the latest edition of AARP The Magazine that Bennett was first diagnosed in 2016. The magazine says he endures “increasingly rarer moments of clarity and awareness.”(Photo by Evan Agostini/Invision/AP, File) 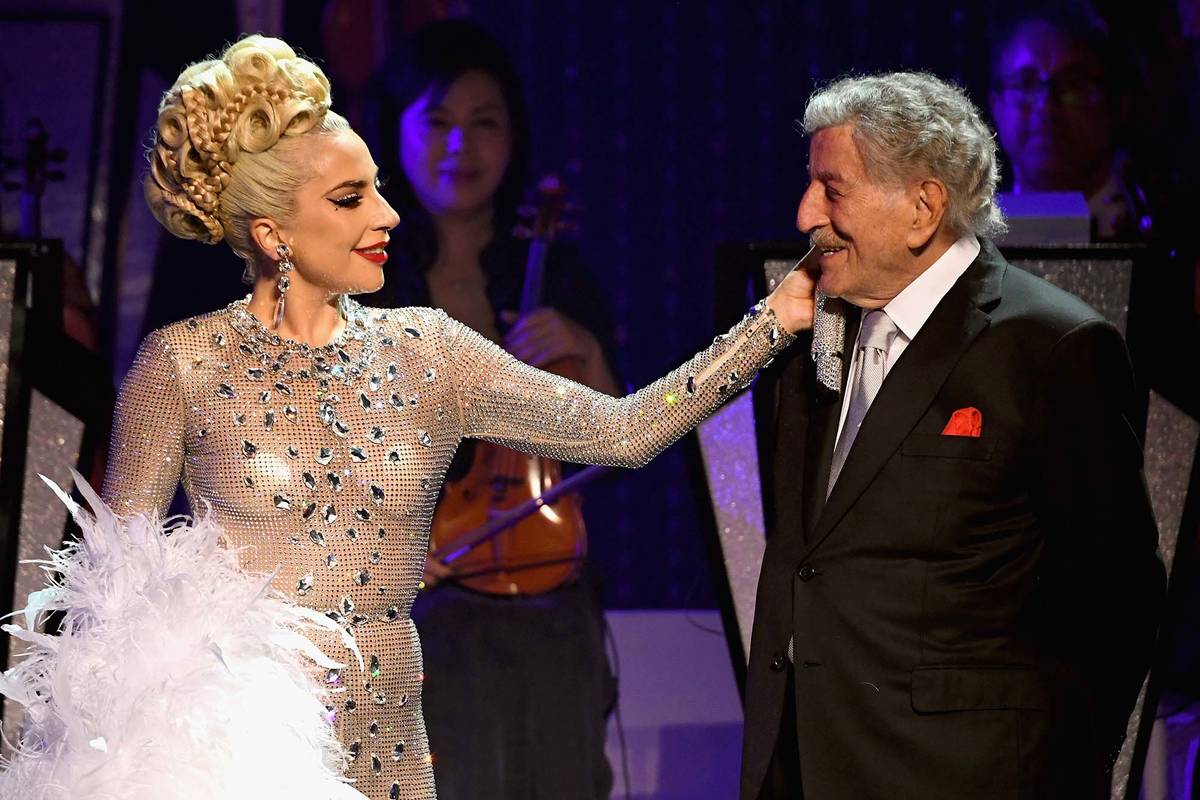 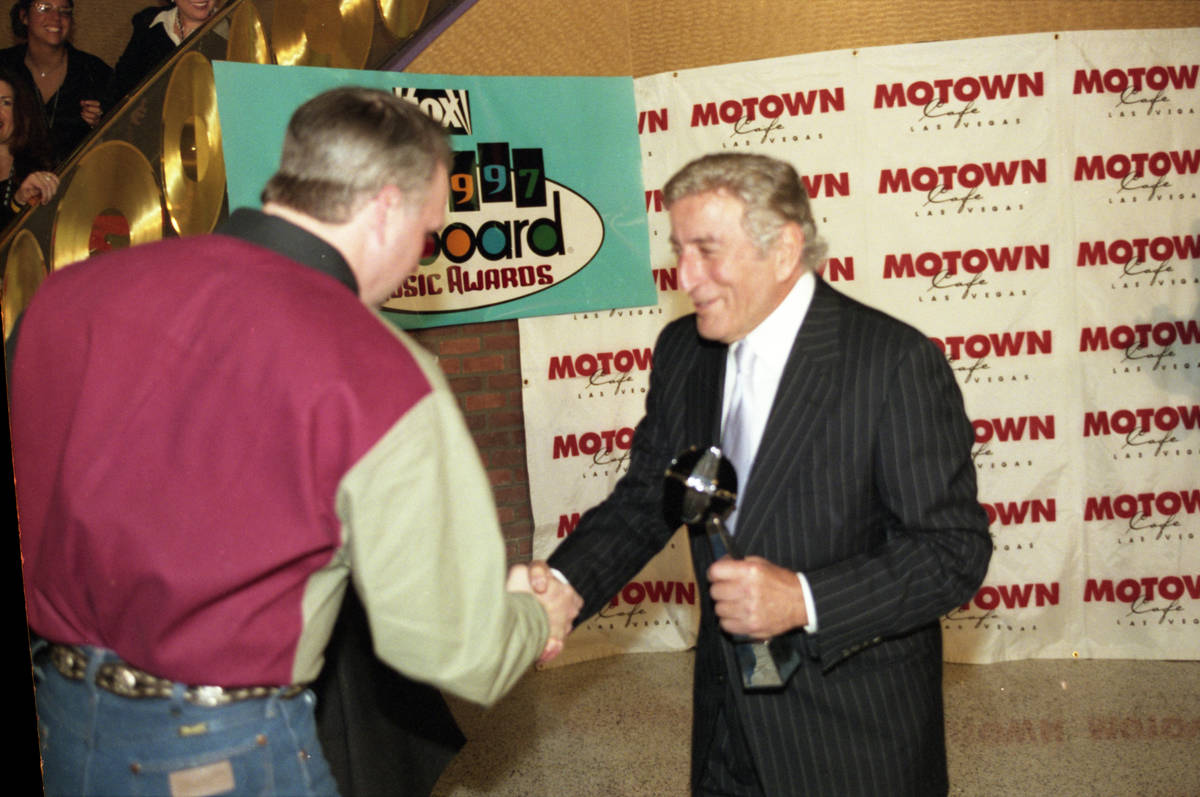 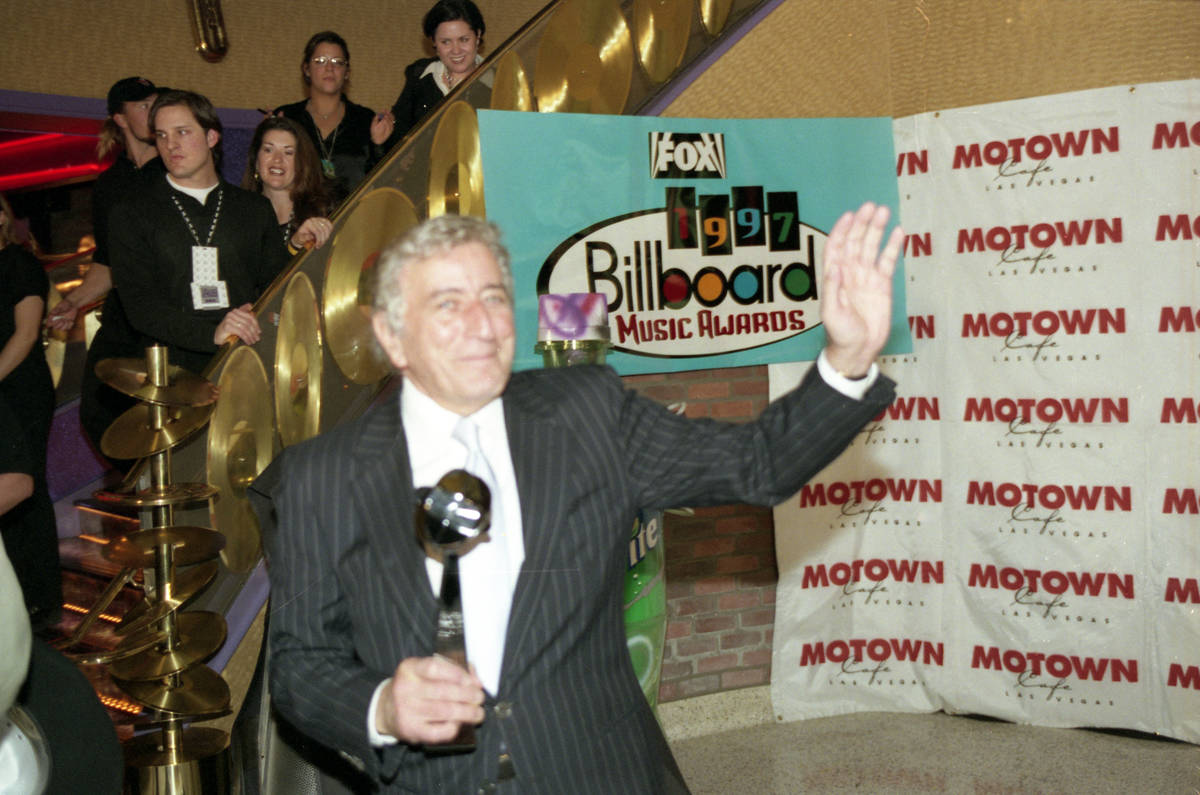 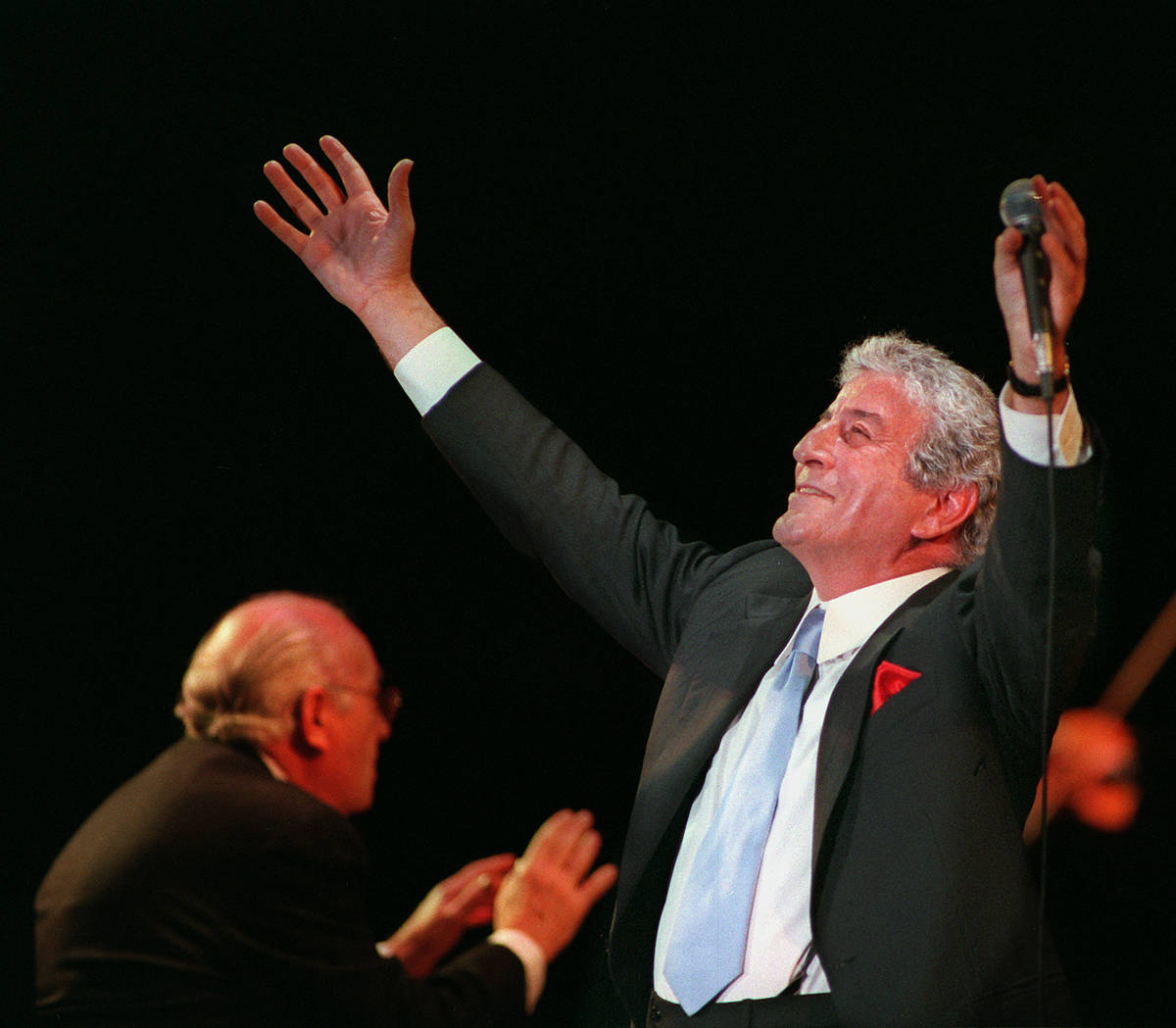 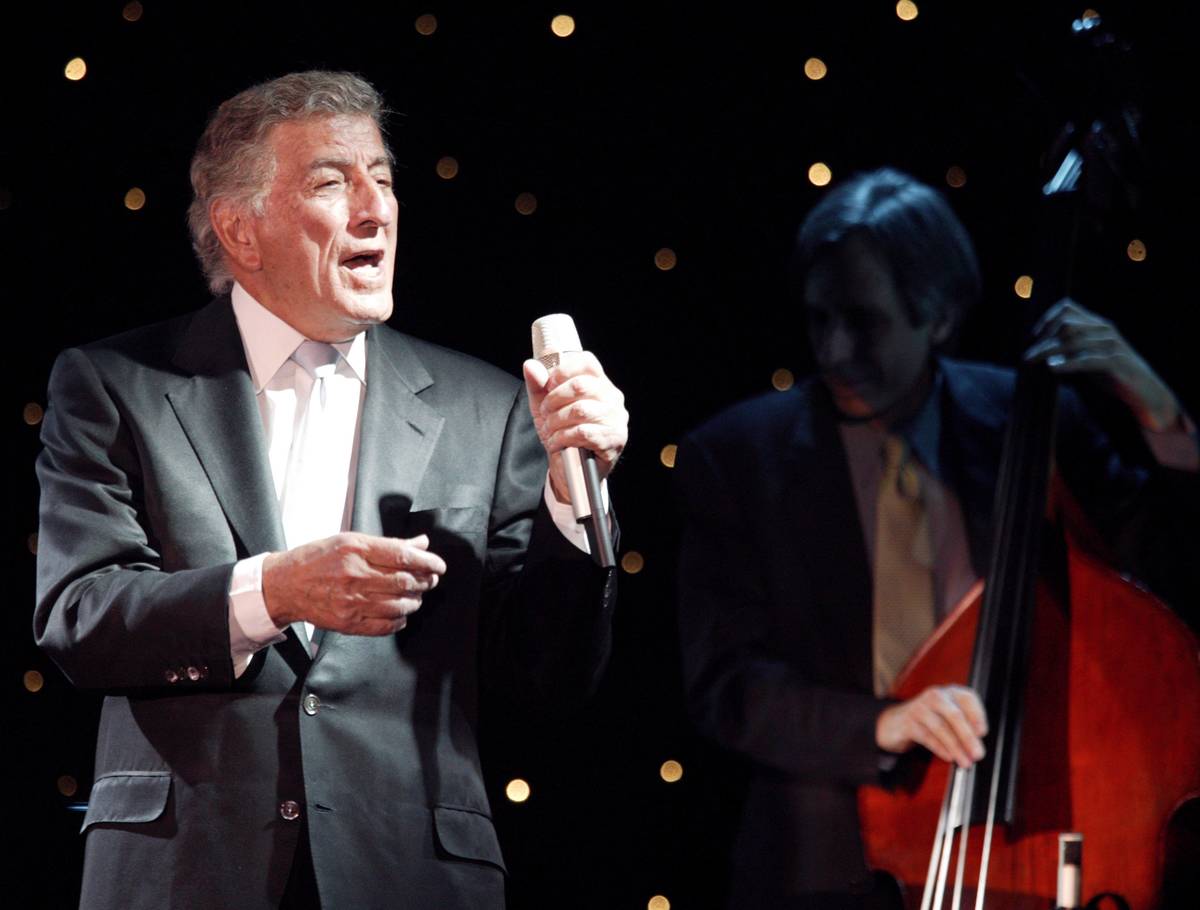 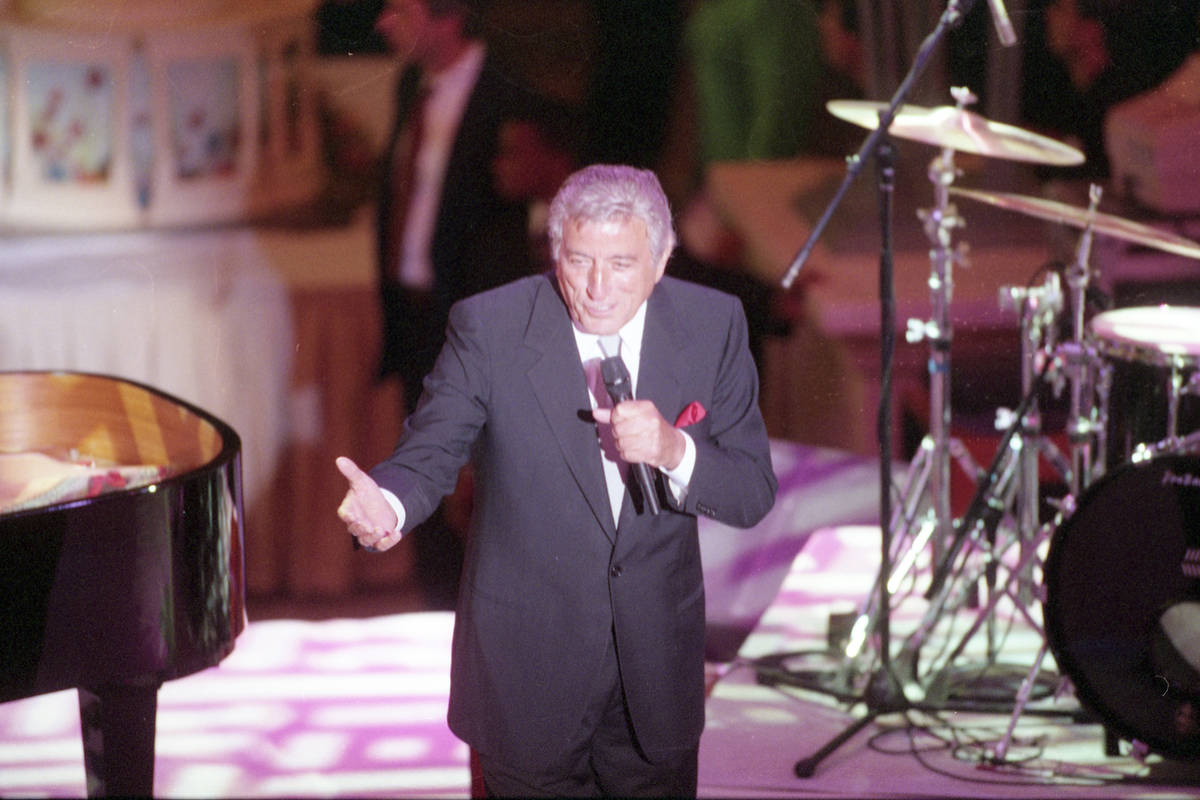 Tony Bennet entertains VIPs at the opening of the new wing of The Forum Shops at Caesars Palace in 1997. (Review-Journal file photo) 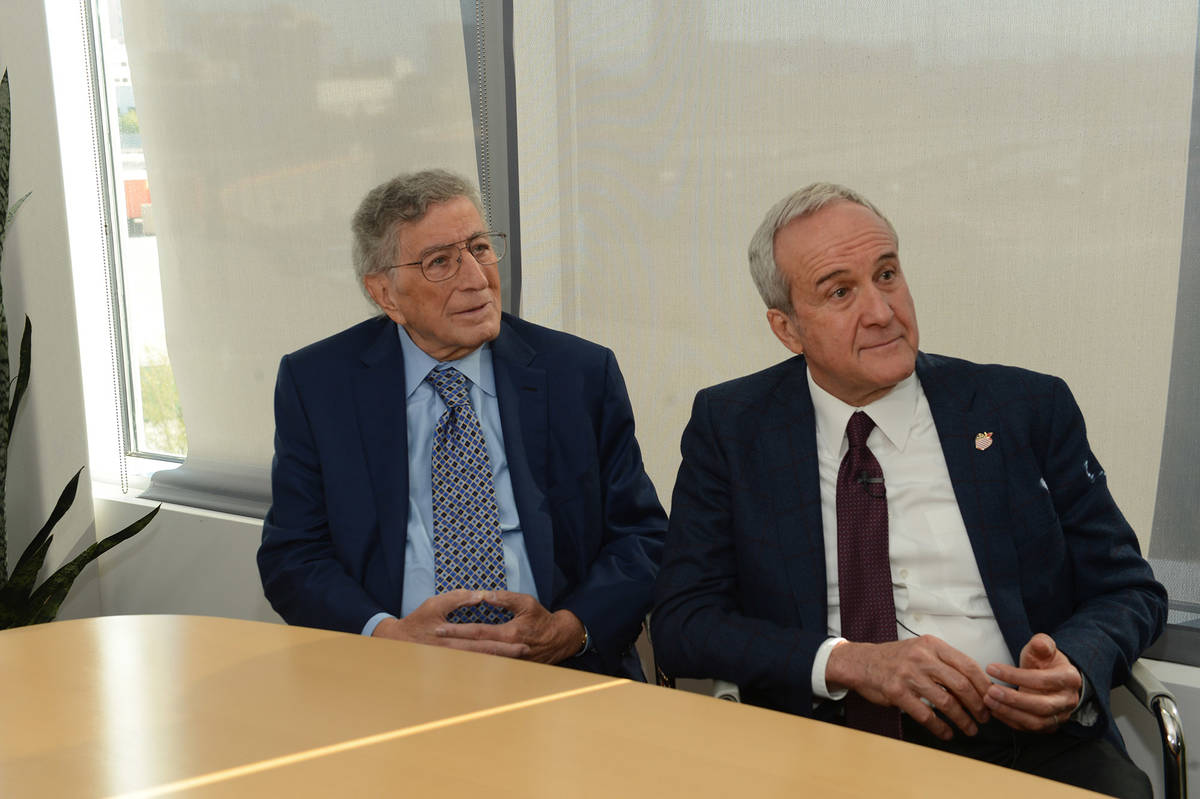 Las Vegas favorite and international entertainment legend Tony Bennett has revealed he has been diagnosed with Alzheimer’s.

The 94-year-old Bennett announced his diagnosis through a lengthy profile in AARP The Magazine. He also posted a message to Twitter, saying, “Life is a gift — even with Alzheimer’s.” And thanked his family and the publication for telling his story.

Bennett was diagnosed in 2016, the same year he was honored by Keep Memory Alive’s Power of Love gala at MGM Grand Garden Arena. Bennett was long a supporter of Cleveland Clinic Lou Ruvo Center for Brain Health, and was in powerful voice during a soaring medley to close the show.

Ruvo Center founder Larry Ruvo had a cake made for Bennett that night, an exact replica of Bennett’s childhood home in Queens. When the cake arrived, the audience roared. Bennett then added a closing number, “How Do You Keep The Music Playing” as Ruvo rolled the cake, decorated with several sparklers, onto the stage.

“He called me the next day and said, ‘Something happened to me last night that has never happened in my career. I lost it onstage,” Ruvo said Monday. “He looked at that house and said, ‘I saw my father and I, sitting on that stoop.”

Because of such appearances, the public had been unaware of Bennett’s declining health as he kept performing. His most recent dates in Las Vegas were a three-show set at The Venetian Theatre on Sept. 25, 27 and 28. His three dates at The Venetian last August were cancelled because of COVID restrictions.

Prior to those dates, Bennett took the stage in an unbilled appearance with Lady Gaga at Park Theater on June 10, 2019. He also joined Gaga the previous January.

Bennett performed as headliner at Caesars Palace’s 50th-anniversary celebration in August 2016, and had co-headlined with Gaga at the Chelsea at the Cosmopolitan on New Year’s Eve weekend 2014. He performed a set of six shows at Encore Theater in October 2017.

The recording legend’s last public performance was March 11 at Count Basie Center for the Arts in Red Bank, New Jersey.

Bennett’s wife, Susan, and son Danny are helping the iconic entertainer live comfortably after his diagnosis.

As AARP noted, “Both Susan and Danny said that backstage, Tony could seem utterly mystified about his whereabouts. But the moment he heard the announcer’s voice boom ‘Ladies and gentlemen — Tony Bennett!’ he would transform himself into performance mode, stride out into the spotlight, smiling and acknowledging the audience’s applause.”

Bennett does plan to release new music this spring, a follow of his 2014 album “Cheek to Cheek” with Gaga. Those songs were recorded between 2018 and early 2020. According to AARP, Gaga knew of Bennett’s diagnosis when their recording sessions were filmed as part of a documentary.

“The pain and sadness in Gaga’s face is clear at such moments — but never more so than in an extraordinarily moving sequence in which Tony (a man she calls ‘an incredible mentor, and friend, and father figure’) sings a solo passage of a love song. Gaga looks on, from behind her mic, her smile breaking into a quiver, her eyes brimming, before she puts her hands over her face and sobs.”

As part of Bennett’s appearance at the 2016 Power of Love gala, the Las Vegas Strip was renamed Tony Bennett Boulevard in his honor as one day, May 21, 2016. During the gala event, such stars as Andra Day, Darius Rucker, Herbie Hancock, Chris Botti, James Corden, Jordin Sparks and Steven Tyler took the stage to honor Bennett.

Ruvo was first made aware of Bennett when Bennett played the showroom at Sahara and Ruvo worked the front desk. That was in 1962-‘63, when Ruvo attended Las Vegas High School. Their relationship has spanned the decades.

“Tony has always loved Las Vegas, and his support of the Cleveland Clinic has been very, very, very big deal,” said Ruvo, who recalled touring Bennett through the Ruvo Center in December 2015. “We were doing an interview down at the Center, and he was asked, ‘When are you going to stop working?’ And he said, ‘Never. All my friends who have stopped working have died. I’ll never stop.”