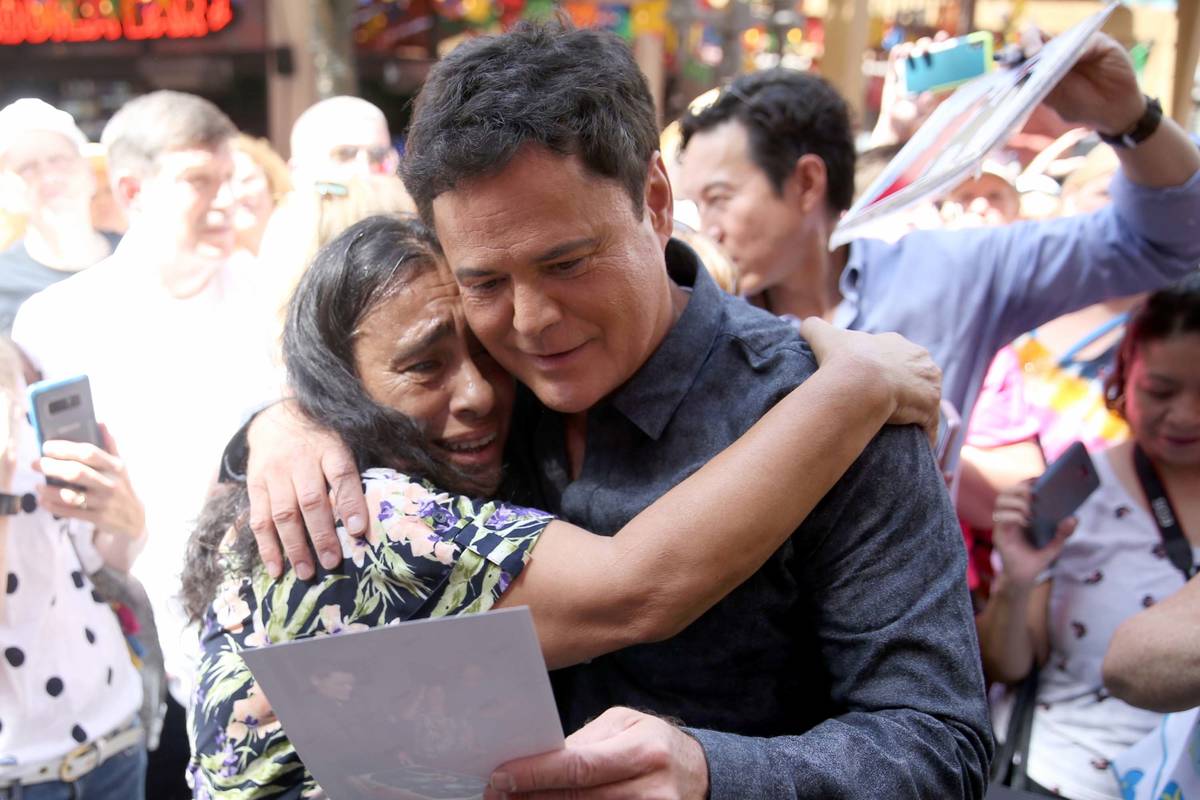 Strip headliner Donny Osmond hugs Lucie Hanna of Canoga Park, Calif., after receiving a Key to The Las Vegas Strip with his sister Marie during a ceremony at the Flamingo Las Vegas in this Aug. 23, 2019, file photo. (K.M. Cannon/Las Vegas Review-Journal) @KMCannonPhoto 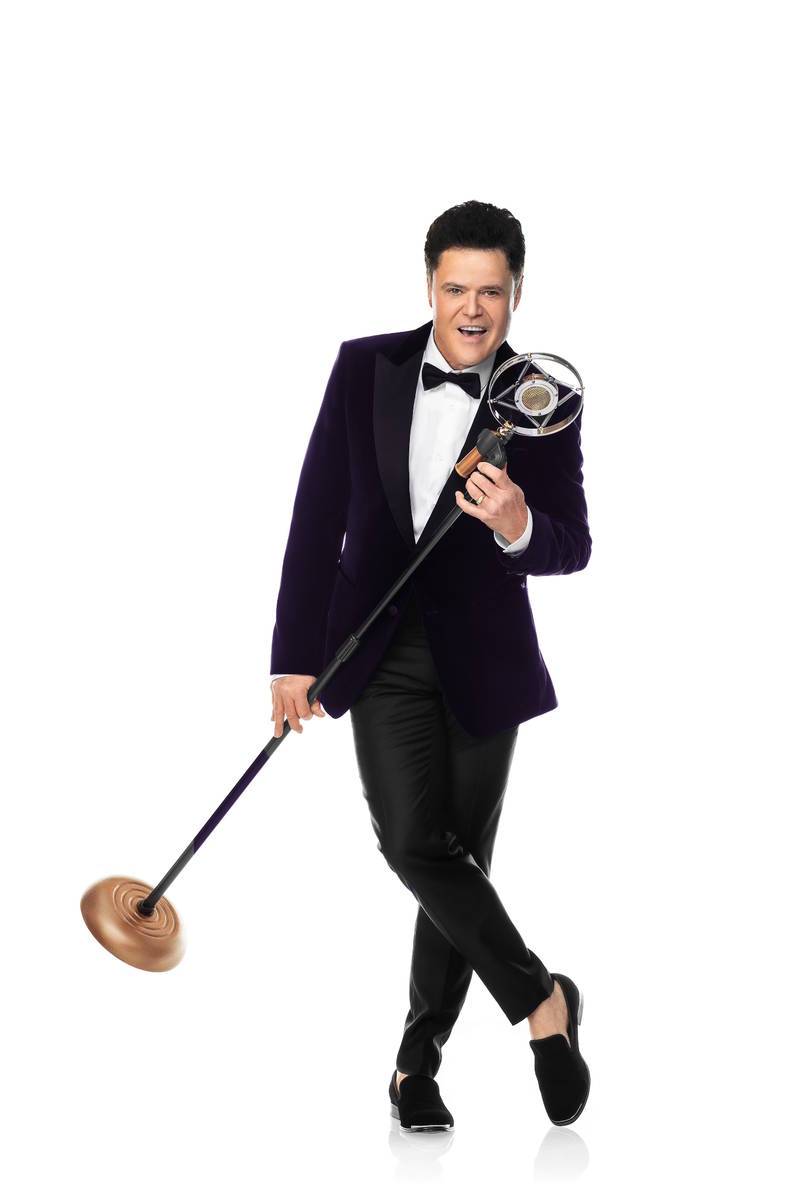 Donny Osmond, shown in a publicity photo, return to the strip in "Donny!" opening Aug. 31 at Harrah's Showroom. (Lee Cherry) 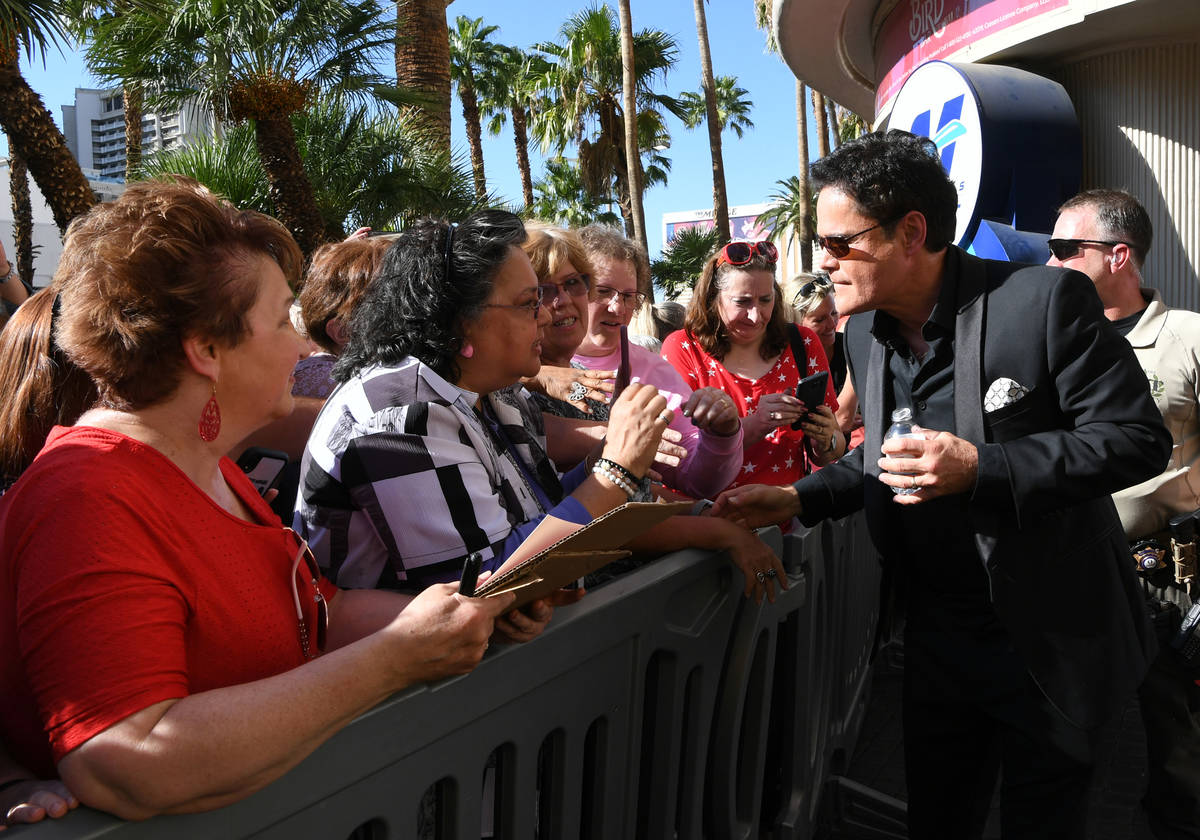 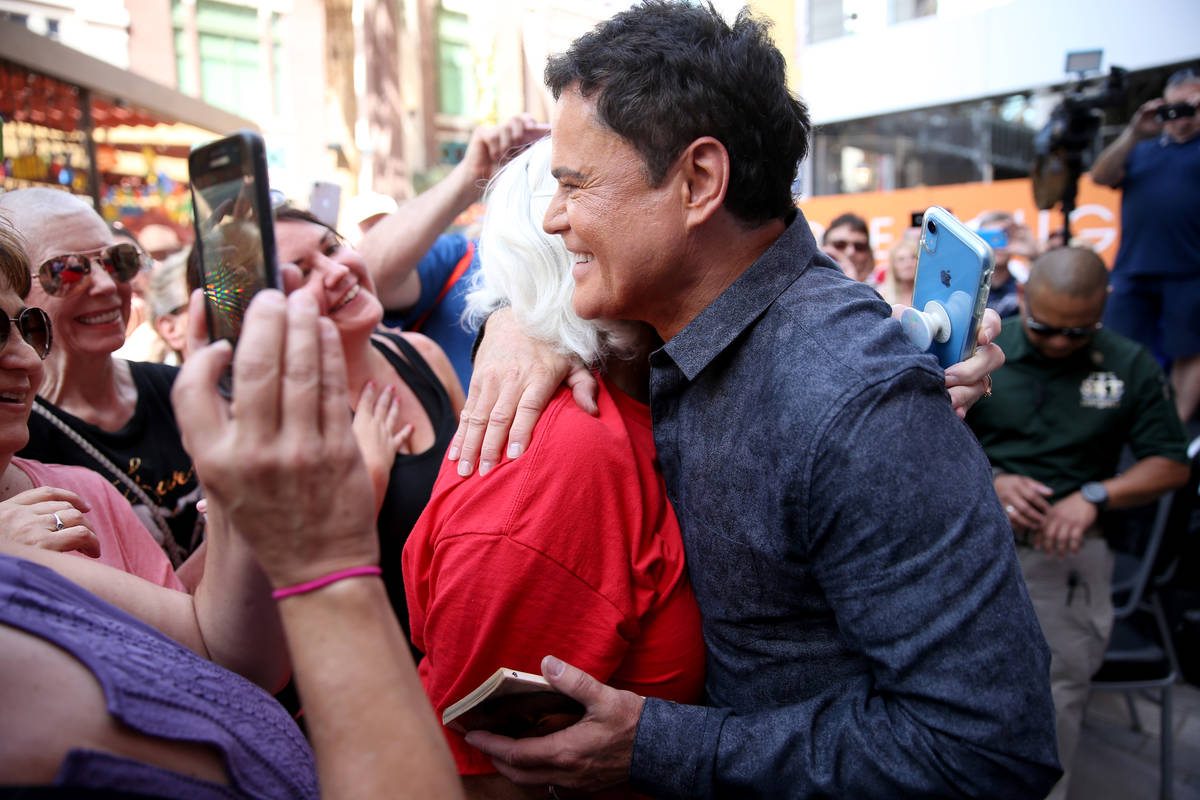 Strip headliner Donny Osmond hugs Kim Lemons of Sterling, Okla. after receiving a Key to The Las Vegas Strip with his sister Marie during a ceremony at the Flamingo Las Vegas Friday, Aug. 23, 2019. Signed for six weeks in September 2008, the siblings have extended their stay again and again. Their residency comes to an end on Nov. 16. (K.M. Cannon/Las Vegas Review-Journal) @KMCannonPhoto 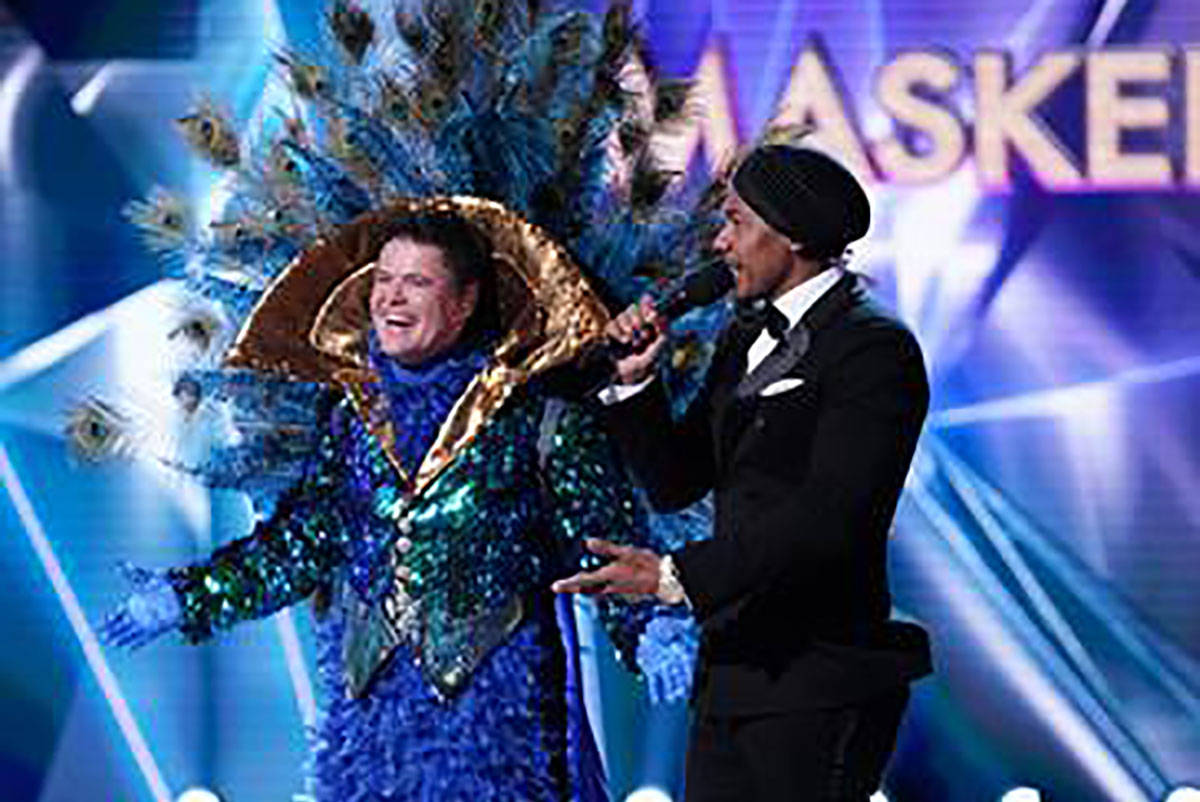 The Peacock is revealed as Donny Osmond during "The Masked Singer." With Osmond is host Nick Cannon. (FOX)

The ampersand is gone. The sister is doing her own thing. The showroom is in a different hotel. But Donny Osmond, in the form of “Donny,” is returning to the Las Vegas Strip.

Displaying his passion as a solo artist, Osmond opens Aug. 31 at Harrah’s Showroom. The show runs 8 p.m. on select dates through Nov. 20 (tickets start at $65, minus fees, onsale at 10 a.m. Tuesday at www.ticketmaster.com/donny).

Produced by Raj Kapoor Productions (co-producer of the 90th Academy Awards telecast, among other projects), “Donny” will be the first production by an Osmond on the Strip since the Donny & Marie production closed last November. The show finally bowed out after a stellar 11-year run at the Flamingo. The announcement of the new show follows almost a year to the day after D&M closed.

Osmond said he has forecast inevitable questions about his sister, Marie Osmond, with whom he built an enduring family entertainment partnership.

“Interestingly enough, we’ve talked about doing this kind of stuff before we closed at the Flamingo, and she was really excited even back then,”Osmond said during a phone chat Thursday afternoon. “But if I get a call from her, and I have to jump off real fast and talk to her, I’ll call you right back (laughs).”

Marie Osmond weighed in with her thoughts on her brother’s new gig later Thursday. “Donny and I enjoyed performing together for 11 years on the Strip and now I wish him nothing but success and happiness in his new adventure.”

Even with its success, the Donny & Marie show in Las Vegas, was a departure from the siblings’ passion for individual projects.

“Both she and I have had our individual solo careers, even from the beginning, when I was 12 years old and started recording on my own and Marie had her solo career, with ‘Paper Roses,’ until 1976, when we came together and formed the duo ‘Donny & Marie,’” Osmond said. “We did that for four seasons, then had our individual careers. We came together in 2000 for the talk show, then we split. Then we came back together in 2008 and did Vegas.”

Osmond agrees in the power of the Donny & Marie brand, which graced the Flamingo as a building wrap for more than a decade. But the people behind the brand find independent fulfillment.

“What’s interesting is, we’ve had solo careers all throughout our lives,” Osmond said. “But because the ‘Donny & Marie’ show was so popular back in the ’70s, and the Vegas show did so well, everybody thinks that’s the only thing we hang our hat on. But it’s been individual ever since the beginning.”

The move into the classically appointed Harrah’s Showroom returns Osmond to his earliest era, with the Osmond Brothers. The family act opened Harrah’s Tahoe when Donny was a budding child star.

Osmond plans to sample his entire 60-year career in the “Donny” production. He’s a classically skilled entertainer at the core, so he will employ a full band and backing dancers. He says the show is not just for the “Puppy Lovers,” referring to his first solo hit. It’s for those who recall Osmond from “Dancing With the Stars,” where he won the 2009 championship with Kym Johnson; or the “The Masked Singer,” where he was the Peacock finalist, joking that he was “a trend-setter of performing while wearing a mask.” Or, from his turn as the voice of Disney’s “Mulan.”

“If you look at who will come to my shows, it’s really across the board,” Osmond says. “When people come to a concert, they say, ‘I want to hear the hits,’ so they will. Yes, there is a new album, and a lot of new music in the show. But people will hear what they came to hear, too.”

Osmond continues to work on his 63rd album, which was in development even as he finished the Donny & Marie residency at Flamingo. Often, he’d invite guests to the studio backstage to listen to one of its thumping dance tracks. He says the album will be done, “When it is finished!”

The as-yet-untitled release will be displayed on Harrah’s video screen during a segment of the show that Osmond has not yet titled.

“I’m going to put up all 63 of my albums, and have an audience member, Suzie from Ohio or whoever, pick one song off one album,” Osmond said. “We’ll play the song, or about 20 or 30 seconds of it. The band will hate me (laughs) but it will be a great chance to connect with the crowd.”

Osmond’s stage skills hearken to the golden era of live performance. “I’m a song-and-dance man, at heart,” he says. He will star in a full-scale production, but he knows star power will bring audiences back.

“I’ve learned that it’s not how much money, not how much production, it’s the personality of the show,” Osmond said. “It’s how you connect with a show. People don’t leave the theater humming the lights. They are humming the songs, and they are remembering the experience.” 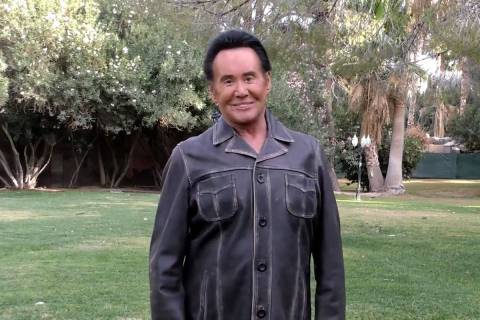