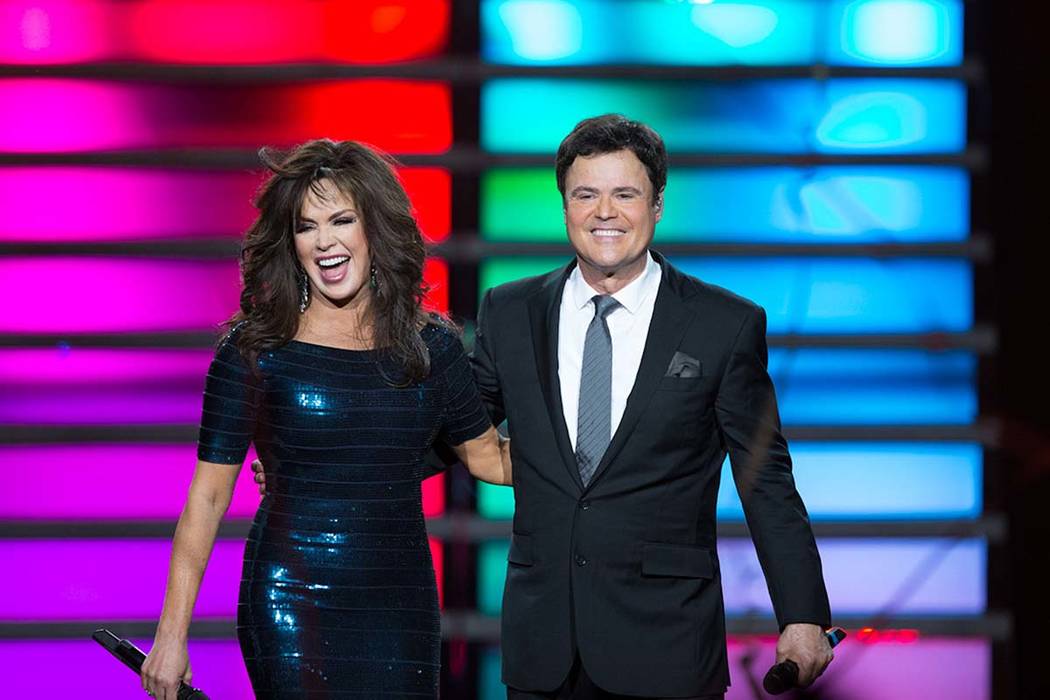 Marie Osmond was a rare call-out from the Donny & Marie production show at Flamingo Las Vegas on Wednesday after her daughter Brianna gave birth that evening. (Caesars Entertainment).

Donny & Marie Osmond represent a famous entertainment brand. But they are siblings first, and a family matter forced a change in their show this week.

Marie Osmond was a rare call-out from the Donny & Marie production show at Flamingo Las Vegas on Wednesday. Marie’s daughter Brianna gave birth that evening, and Marie was present for the event. Donny Osmond held the stage show on his own.

“My daughter, Brianna, gave birth to a beautiful little girl. Mom is doing well and my granddaughter is currently in a pediatric ICU,” Marie said in a statement. “Thankfully, the prognosis looks great for our little angel. We are grateful she is in exceptional hands with her team of doctors and nurses. We ask for your continued thoughts and prayers.”

Marie Osmond posted that her new granddaughter weighed 6 pounds, 10 ounces and was admitted to an ICU unit at an unspecified Children’s Miracle Network partner hospital. Marie is a co-founder of CMN.

Asking for prayers for my precious granddaughter born this evening 6lbs 10 ounces. So thankful she was able to be taken to children’s ICU in one of our amazing @CMNHospitals #gratitude that she is in their care!🙏👶🏻 ♥️

Donny Osmond posted, “I am grateful that Brianna’s baby has arrived safely and is in good hands. Sending love, prayers and support to my niece and her family.”

Marie was back onstage Thursday night. Donny has filled in for Marie twice previously during the show’s 11-year run. Marie covered for Donny for several performances in 2013, after Donny underwent surgery to repair a torn tendon in his gluteous maximus, with her brother Merrill Osmond, John Schneider (also a CMN co-founder) and David Osmond (the entertainer son of Osmond sibling Alan Osmond) filling in.

Debbie Gibson’s performance in the “The Mix Tape Tour”, which stops at Mandalay Bay Events Center on Saturday night, have also served as an ongoing fashion show.

“I decided I was going to have an array of wardrobe changes on this tour,” Gibson said in a text chat Friday. “These days, with Instagram, it’s fun to give everyone at home watching a show. I think my fave is an Alice + Olivia gown that I had (costume designer) Daniella Gschwendtner cut into a mini. It really captures my vibe.”

Gschwendtner is costume designer on “Dancing With the Stars.” Gibson appeared on the show in 2017. During “The Mix Tape Tour,” Gibson says, “In 16 shows, I’ve maybe repeated three outfits.”

The tour has been a roll-out of such nostalgia acts New Kids On the Block, Salt-N-Pepa, Naughty by Nature and Tiffany.

Not everyone on the bill shares Gibson’s sense of fashion.

“One of the most surreal moments is when I’m pre-setting in the piano lift under the stage for ‘Foolish Beat, and Naughty By Nature is performing, ‘Here We Go’ and I look up and the crowd has their hands in the air, swaying from side to side, and Treach’s jeans are halfway down his arse and his Calvin’s are blown up on the big screen.”

“Here I am trying to get in some sort of emotional and vocal zone but, it kinda takes all the seriousness out of it,” says Gibson, who lives in Las Vegas. “That is a good thing! I can be a bit intense at times!”

Barry Manilow is returning to Broadway this summer, but his dates at Westgate Las Vegas are unaffected.

Manilow is set to play Lunt-Fontanne Theatre from July 26-Aug. 18. He’s at International Theater at Westgate this weekend and through June 15, back again in September-October.

Manilow’s upcoming New York residency is his first Broadway run since 2013, when he sold out 27 shows at St. James Theatre. No word if glow sticks, or 3D glasses, are in the Lunt-Fontanne plans.

Jon Taffer spent much of Friday on recording at Commonwealth on Fremont East for upcoming episode of “Bar Rescue.” This reminds me that I’ve not been inside that haunt. Not a criticism. Merely an observation.

On the topic of downtown, I caught “Princess Wendy’s Late Night Tease Room” at The Attic at Nerd Bar at Neonopolis on Wednesday night. Did I see frontal nudity? Not quite. But the ribald variety show from Matt and Heidi Morgan is one of the new productions animating the heretofore moribund live-entertainment scene at Neonopolis.

The third-level Nerd Bar has become a place to watch. After the “Tease,” I caught some of Kenny Davidsen’s set at the new street-level Don’t Tell Mama location. Yes, two separate experiences in the same night at Neonopolis, on the corner of Las Vegas Boulevard and Fremont Street. This is indeed progress.

Lon Bronson’s All-Star Band at the Smith Center. Bronson’s upcoming 7 p.m. Saturday show at Myron’s Cabaret Jazz has almost entirely sold out, and there are only a handful of seats left for the 9:30 p.m. performance. A few years ago, Bronson seriously considered shutting down his band. No dice. He’s a hit at the Smith Center.

Lannie Counts, the terrific singer whose name is a complete sentence, headlines “The Greatest R&B Songs Ever Written Vol. 2” at 7 p.m. Saturday at Starbright Theatre, Starbright Theater, 2215 Thomas Ryan Blvd. Counts pulls from the best of