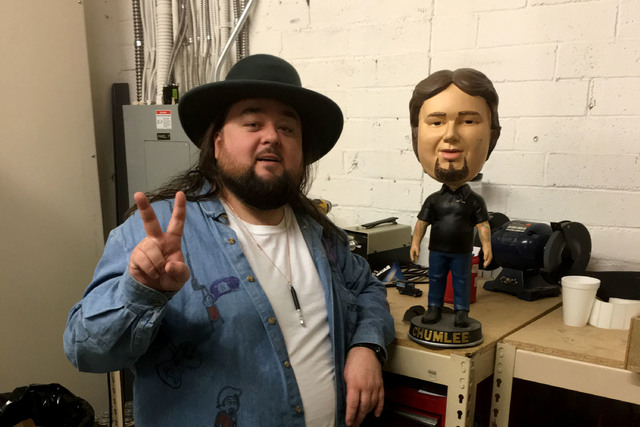 Chumlee is shown with one of his bobble heads in the storage room of Gold & Silver Pawn on Monday, Nov. 14, 2016. (John Katsilometes/Las Vegas Review-Journal)

Chumlee has long been the comic foil on “Pawn Stars,” depicted as the cast member most likely to shoot himself in the foot with, say, a 1762 Grice Brown Bess Musket (a gun that was actually featured in season 11 of the History Channel show).

And legions of fans across the country were concerned that the longtime Gold & Silver Pawn employee might have shot himself in the foot, metaphorically speaking, when he was arrested last March on weapons and firearms charges at his home in Las Vegas.

In May, the self-described “goofball” (whose real name is Austin Russell), reached a plea deal with prosecutors to avoid jail time. He is serving three years’ probation on a gross misdemeanor weapons charge.

To his credit, Chumlee says he has put that episode in the past and reset his life and career. In our first chat since his arrest, he said he is refocusing on his charity efforts and also his work on the TV show.

“I went through a lot, but I’m back on the right path,” Chumlee said, sitting in the Gold & Silver office of his fellow “Pawn Shop” cast member Richard “Old Man” Harrison. “I’m working hard every day, staying close to my family. … Look, Las Vegas is a fast town, and you can get caught up in – just hanging out after a late dinner at a bar can cause a person to stray from getting enough sleep or taking care of yourself.”

He plans on losing some weight, for starters. Chumlee is a bigger star than ever today, weighing about 260 pounds His target is 230. He dropped to 210 while following a stringent diet regimen a few years ago, but “got tired of eating chicken and vegetables, six times a day, out of Tupperware.”

“My doctor says I need to just pick a weight I’m comfortable with and stay there,” he said.

Chumlee’s charitable efforts include campaigning for the Children’s Heart Foundation. His GoFundMe page raises money and spreads awareness for those suffering from congenital heart defects. Also, he and Harrison, the store owner and visionary of the TV series, welcomed a group of Wounded Warriors to the store on Monday afternoon.

As always during the show’s filming schedule, Gold & Silver was jammed with fans. The show, which launched in 2009, is shooting its 13th season. Expect Chumlee to break away from fellow castmates, including Gold & Silver owner and manager Rick Harrison, Corey “Big Hoss” Harrison and “Old Man,” for his own storyline next season.

“Rick has finally taken the leash off and let me out on my own!” Chumlee said, laughing. “After 440 episodes, Chum finally gets to be on his own! Look for lots of solo Chum!”

Solo Chum? Sounds like a good title for a spin-off, if we can keep Chumlee himself from spinning off.

Rick Harrison is heading to Washington D.C. in January for President-elect Donald Trump’s inauguration. The campaign invited Harrison to thank him for supporting candidate Trump even though he endorsed Florida Sen. Marco Rubioduring the Republican primaries. Harrison was never a huge Trump fan, but said, “It’s like what Ed Koch said when he was mayor of New York. ‘If you agree with me on nine out of 12 issues, vote for me. If you agree with me on 12 out of 12 issues, have your head examined.’ ”

A production of Chippendales, which has enjoyed a 15-year run at the Rio with its all-male revue, “53X” is said to be headed for hiatus with hopes of reopening in a new venue. This has become the mantra of shows closing in Las Vegas.

Incoming Palms General Manager Mike Jerlecki prides himself on the range of his musical tastes. He has brought back the great horn-powered band Santa Fe & The Fat City Horns to the Lounge at the Palms, for instance. So I asked Jerlecki what was his first concert. “Run-DMC with the Beastie Boys,” he said without hesitation, referring to the 1987 tour stop in his hometown of Detroit. The double-bill concert was held at Memorial Coliseum, promoting Run-DMC’s “Raising Hell” album and the Beastie Boys’ epic release, “Licensed To Ill.”

Note: This version of the column corrects the Palms venue for Santa Fe & The Fat City Horns.