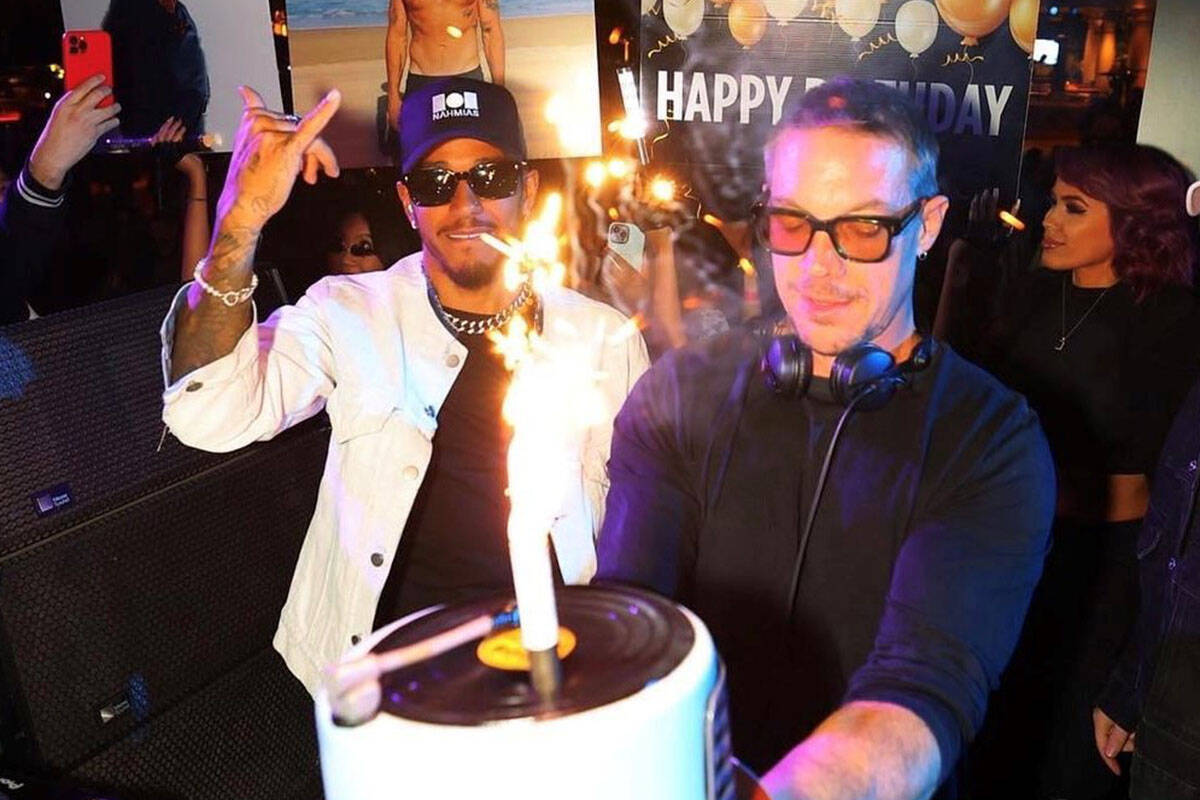 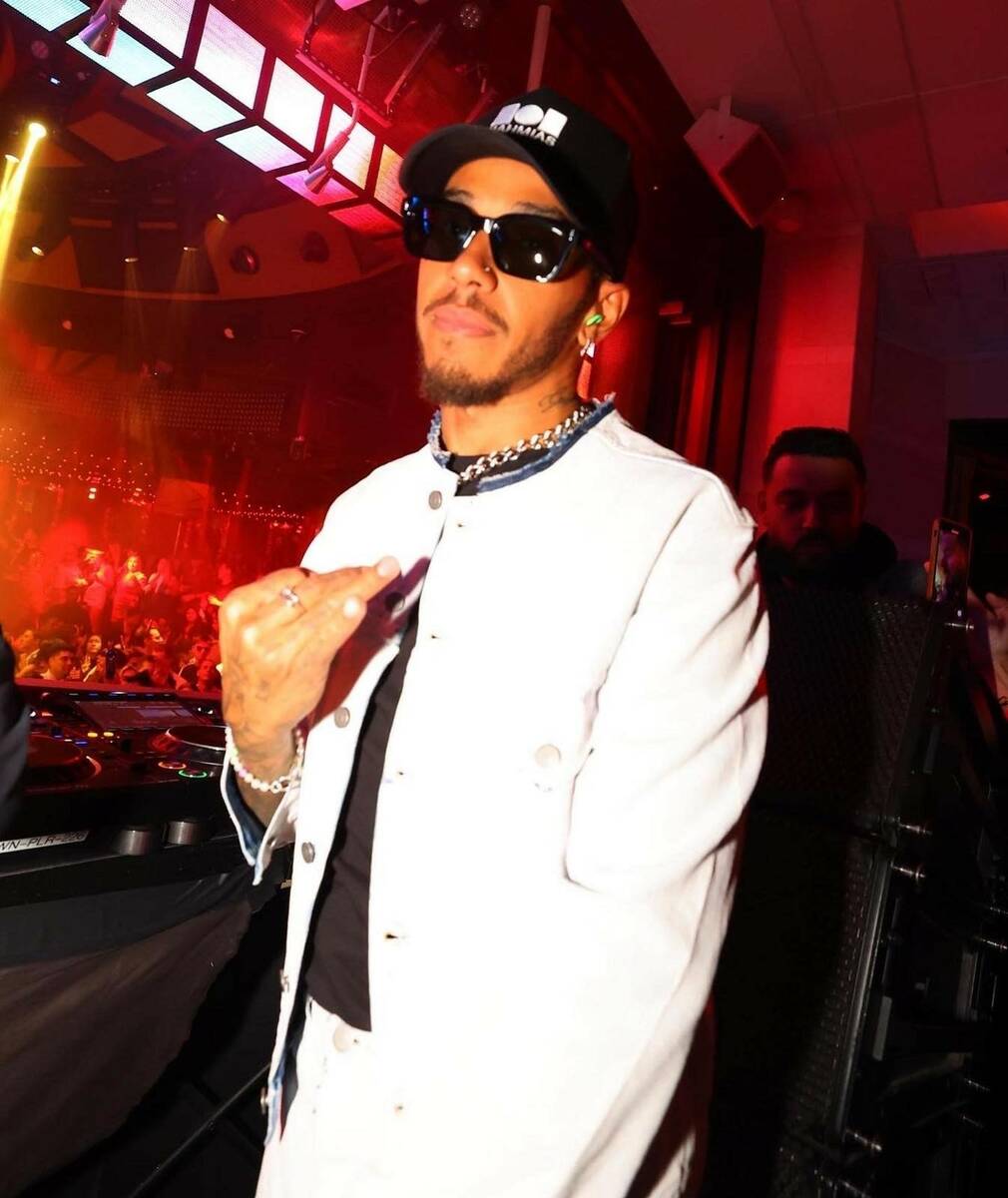 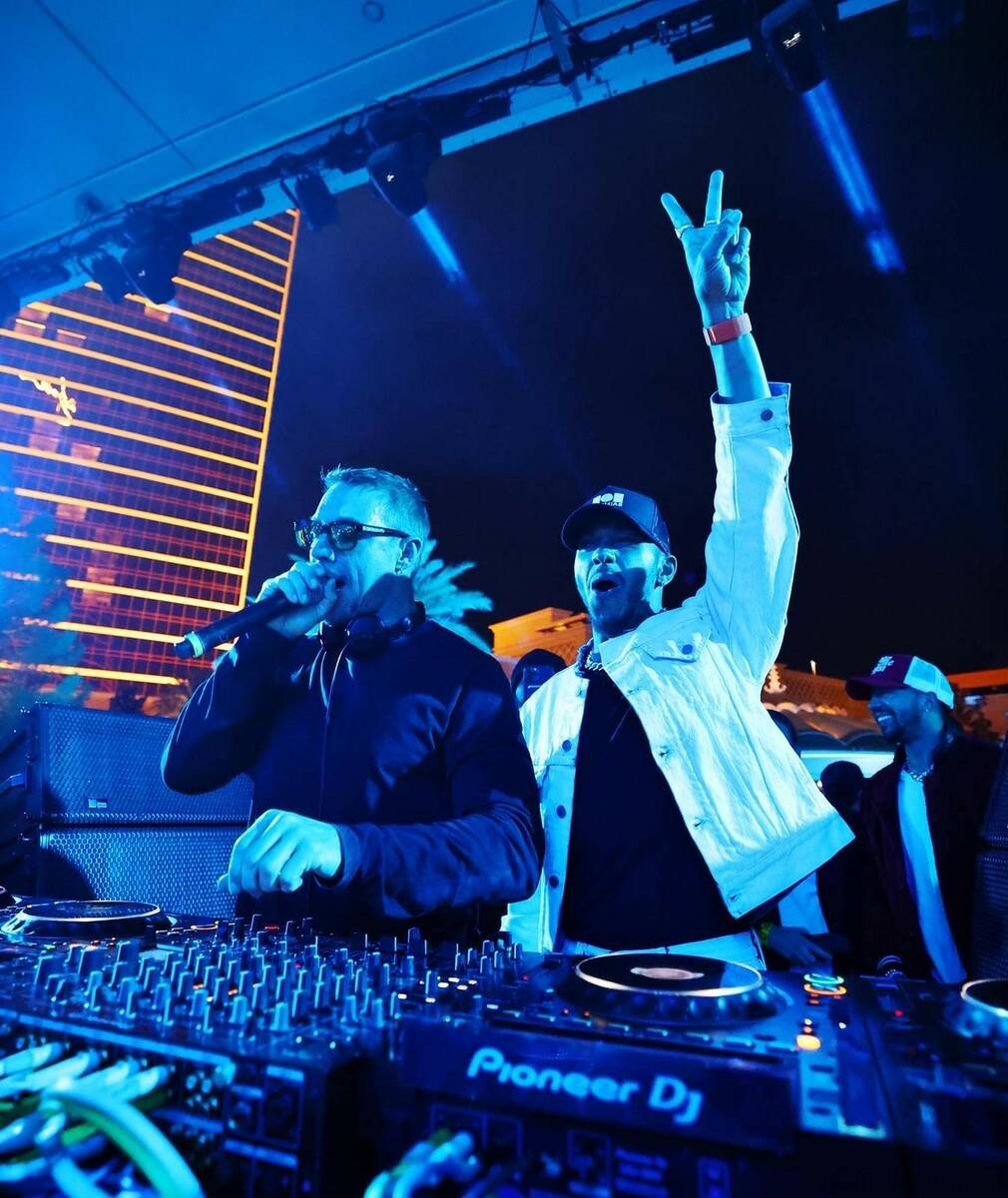 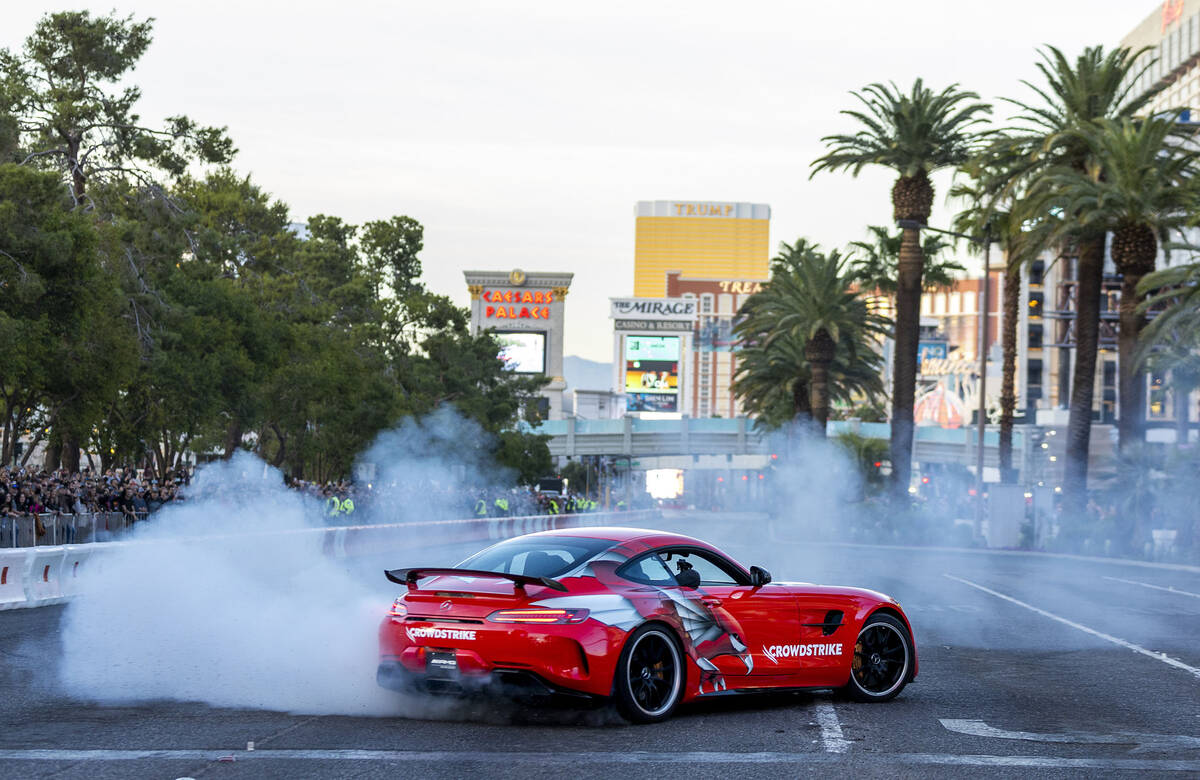 Racer Lewis Hamilton tests the track with doughnuts in a Mercedes before racing down the Strip during the Formula One Las Vegas Grand Prix Fan Fest across from the Bellagio on Saturday, Nov. 5, 2022, in Las Vegas. (L.E. Baskow/Las Vegas Review-Journal) @Left_Eye_Images 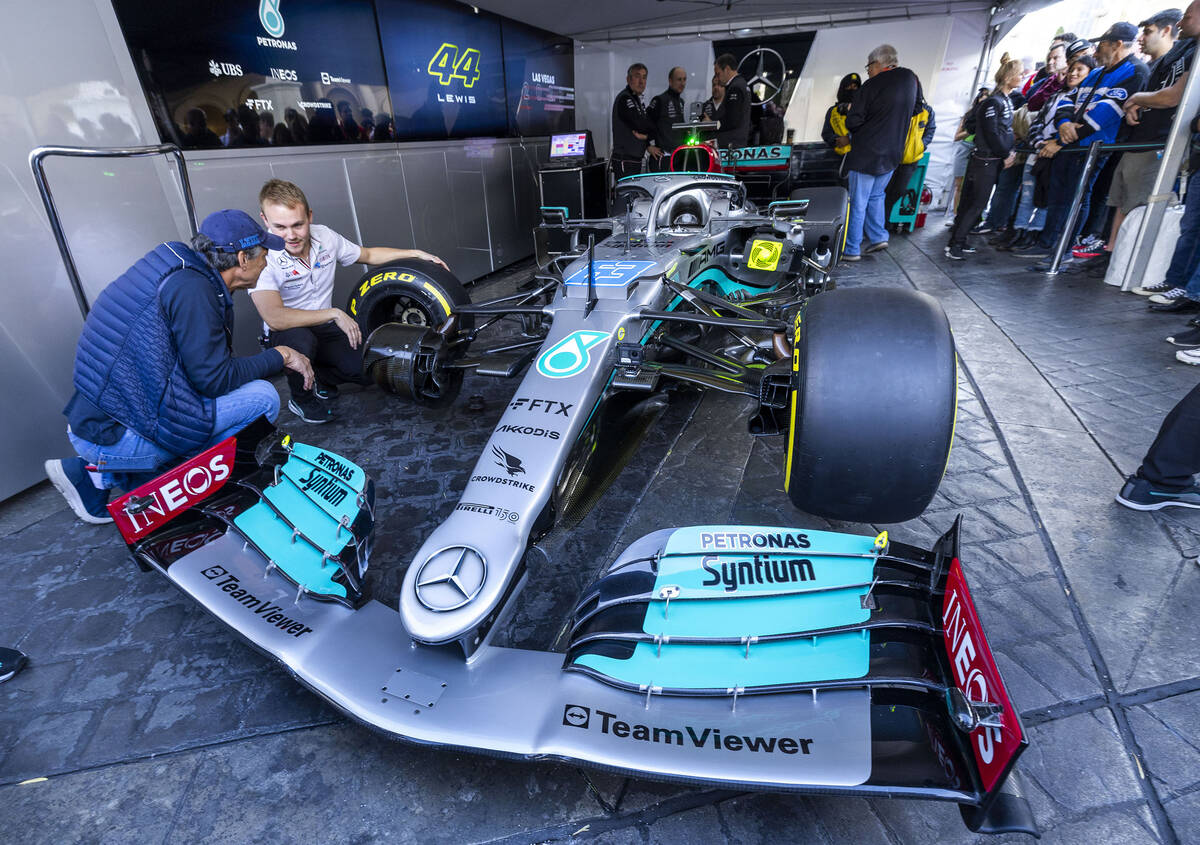 A team technician shows off the Lewis Hamilton – Mercedes-AMG Petronas racing car during the Formula One Las Vegas Grand Prix Fan Fest at Caesars on Saturday, Nov. 5, 2022, in Las Vegas. (L.E. Baskow/Las Vegas Review-Journal) @Left_Eye_Images ***Note only would give first name of Justin 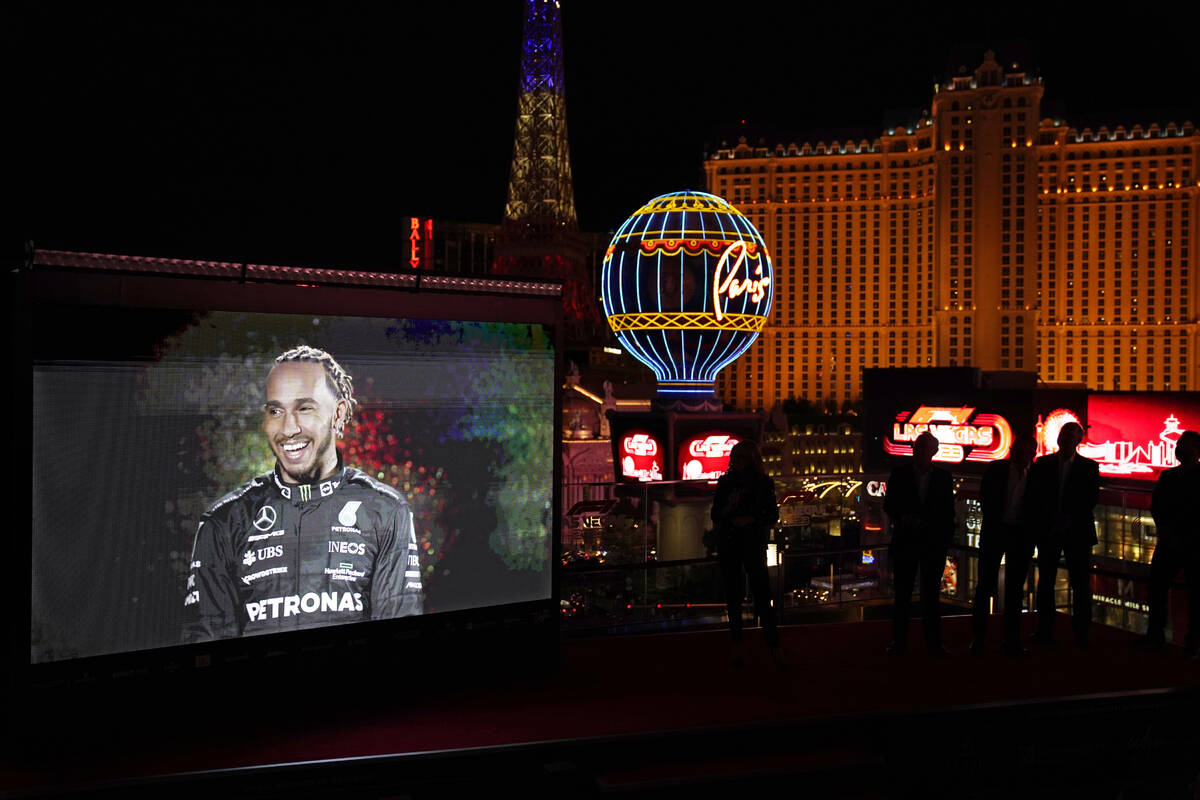 People watch as a recording of Mercedes driver Lewis Hamilton, of Britain, is projected onto a screen during a news conference announcing a 2023 Formula One Grand Prix auto race to be held in Las Vegas, Wednesday, March 30, 2022, in Las Vegas. (AP Photo/John Locher)

Formula One champ Lewis Hamilton knows how to run, full-throttle. That was true in his Strip endeavors Saturday night.

Hamilton took a long, rowdy spin around at XS Nightclub at Wynn Las Vegas after the Las Vegas Grand Prix Fan Fast blasted through the neighborhood. Hamilton partied with headliner Diplo, who was also celebrating his birthday during his residency performance.

A seven-time F1 champion, Hamilton celebrated through the entire set. He steered the show by shouting, “Let’s go!” and, “Are you ready,” as if dropping the party’s green flag. He and his pit crew rolled out about 2:30 a.m.

The club brought out a cake for Diplo, who actually turns 43 Thursday. The cake was designed as a vintage record player. As per club custom, it was topped with a giant sparkler.

Hamilton himself looked like a superstar DJ, wearing shades, a white collarless jacket and assorted accessories. British superstar should be a focal point when the Grand Prix hits Vegas for real next November. He already looks the part.

We used to know Silverton’s lounge, simply, as Mermaid’s. today it’s Mermaid Lounge Live. Juice it up a little. Live music runs 8 p.m.-11 p.m. Fridays and Saturdays. This weekend its Michael Braun on Friday, Zach Winningham on Saturday, in the lounge’s rotation of eclectic acts. The club’s signature, glowing, 117,000-gallon aquarium is part of that scene. No cover, ages 21-over.