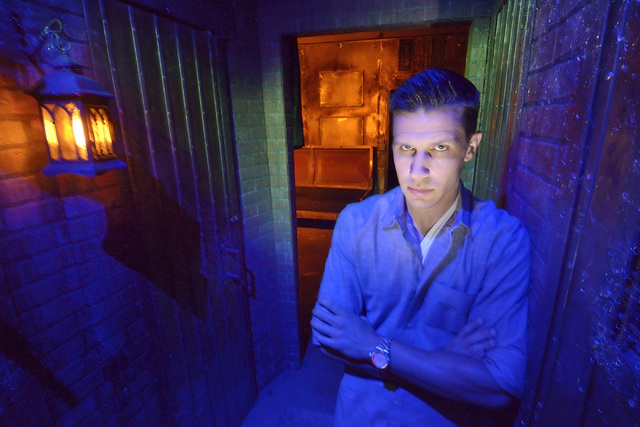 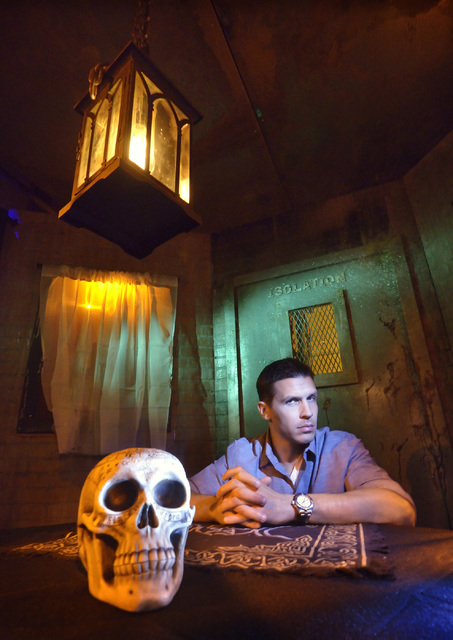 Even as he expresses affection, Jason Egan can’t help but project the macabre.

“I love what I do,” says the founder of Fright Dome at Circus Circus. “I love it to death.”

This, from a man who owns a river’s worth of fake blood and an assortment of saws.

Celebrating its 14th year on the Strip, Egan’s vast and ghastly attraction opens Friday and runs through Halloween. The 38-year-old visionary has again developed an impressively gruesome partnership, with one of Fright Dome’s haunted houses based on the “Five Nights at Freddy’s” series of video games.

The house follows the game’s plot of a “Chuck E. Cheese gone bad,” as Egan describes. The animatronic characters spring to life and descend on the player — or haunted house visitor — who is trapped in an office, watching as the creatures lurch forward. The guests can lock the door and shut down the lights, but only until the office security system runs out of battery life.

Also new to Fright Dome is the Krampus’ Not So Silent Night haunted house, a collaboration between Egan and Gary Tunnicliffe. The master special-effects artist has worked with Egan on past Fright Dome houses based on Tunnicliffe’s films “Hellraiser,” “Halloween,” “Blade” and “Scream.”

The haunted house, of course, features the Krampus — the evil, horned-demon version of Santa Claus — and is replete with holiday scents (peppermint, eggnog and such). It is built high above the Adventuredome floor.

Egan is well-versed in creepy. He was a fan of such horror films as “Friday the 13th,” “Nightmare on Elm Street” and “The Texas Chainsaw Massacre” from his days as a kid in Omaha, Nebraska. He built rudimentary haunted houses in his backyard and in 1998 assembled his first public haunted house across the street from the Federal Building in Lincoln. This is what an imaginative guy does after earning a degree in business.

Egan moved to Vegas in 2001 and opened his first Fright Dome on Highland Drive west of the Strip, which is sort of ghoulish already. A patron who worked at Circus Circus left her card for Egan, saying he should try to move the Fright Dome into the then-new Adventuredome during the month of October.

With no manager or agent, Egan convinced Circus Circus brass to take on Fright Dome, renting him a segment of Adventuredome and test-driving the haunted fortress in 2003. By 2009, he was approaching 100,000 visitors a year, a number he’s brushed against but has yet to surpass.

Most impressive is the longevity of Fright Dome, which has outlasted most stage productions and similarly themed attractions competing for entertainment dollars since it opened in 2003.

“I look at what has happened in Las Vegas, and not many shows last nearly this long, and I consider this a big show,” Egan says. “It’s impressive when you really start to think of it. Shows like ‘O’ and ‘Mystere’ have been around that long, but not too many others.”

Aggressive but not inherently dangerous (no visitor is ever grabbed), Fright Dome is nonetheless deemed inappropriate for guests younger than 12. Attention to detail, high quality and rotating themes have kept Fright Dome from itself turning in to a zombie. Egan reinvests up to $2 million a year in the fortress and employs some 400 actors, stagehands, ushers, ticket-takers and security officers each year.

Those who pass the annual auditions are dressed zombie-style, hoisting chain saws while waiting in the dark, in one of Fright Dome’s many mazes. They chase visitors (often while dragging entrails) amid fog and strobes and audio blasts. Over the years the houses have been dubbed Hillbilly Hell, Zombie Quarantine and the Offspring house.

Some themes are never retired.

“The Clown House,” Egan says when asked for an example. “It’s all under black lights and in 3-D. You have to have the clowns. People are really disappointed if you don’t.”

A bona fide Vegas success story, Egan has expanded his reach this year to Boston, aboard the (reputedly haunted) U.S.S. Salem battleship for Fright Dome Ghost Ship Harbor. He opened a Fright Dome in Hong Kong in 2014.

Notorious for his unflagging work ethic and jet-setting schedule, Egan is set to leave for the opening of Fright Dome Ghost Ship Harbor the morning after Fright Dome launches on the Strip. He’s often joked that he does feel like one of his own undead characters.

“One day I would like to find a partner, like AEG or Live Nation, someone who really has a huge operation to take Fright Dome to the next level,” he says. “That would be the ultimate goal and end game. I can only do so much.”

But would the singularly successful Egan really feel comfortable ceding control of a phenomenon he built from the ground up?

“It’s a good question,” says the father of Fright Dome. “When I think of it, it’s kind of scary.”

John Katsilometes’ column runs Saturday, Sunday, Tuesday and Thursday in the A section, and Friday in Neon. He also hosts “Kats! On The Radio” at 8 p.m. Wednesday on KUNV-FM, 91.5, and appears at 11 a.m. Wednesday with Dayna Roselli on KTNV-TV, Channel 13. Contact him at jkatsilometes@reviewjournal.com. Follow @johnnykats on Twitter and @JohnnyKats1 on Instagram.