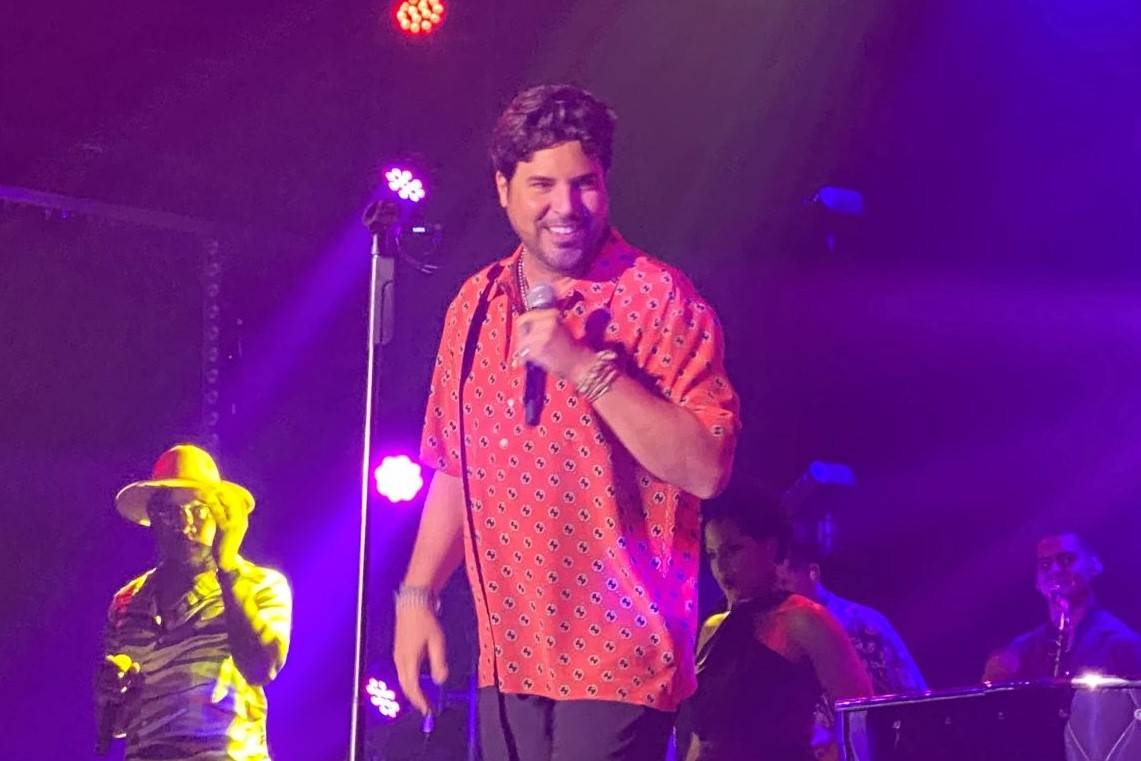 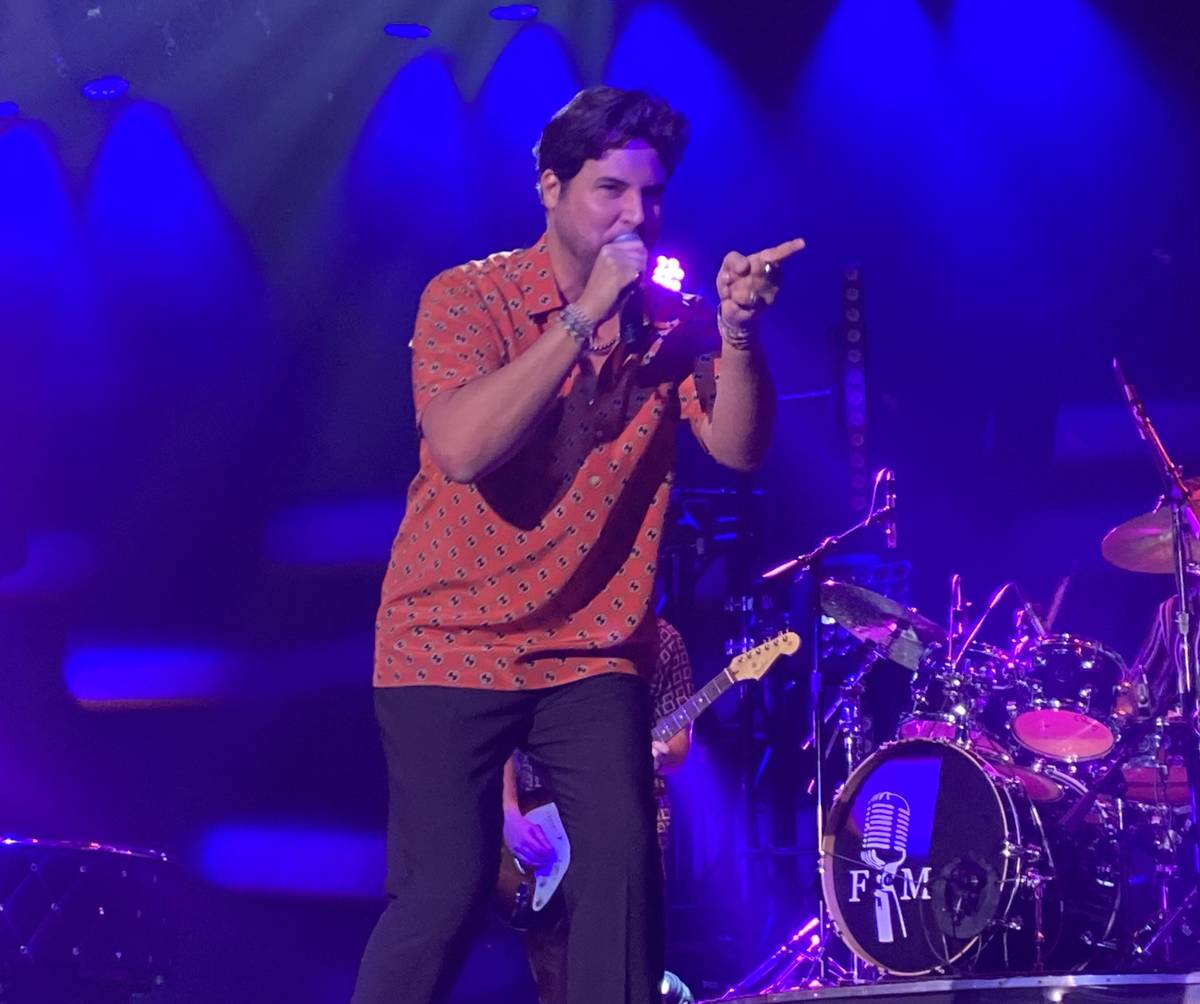 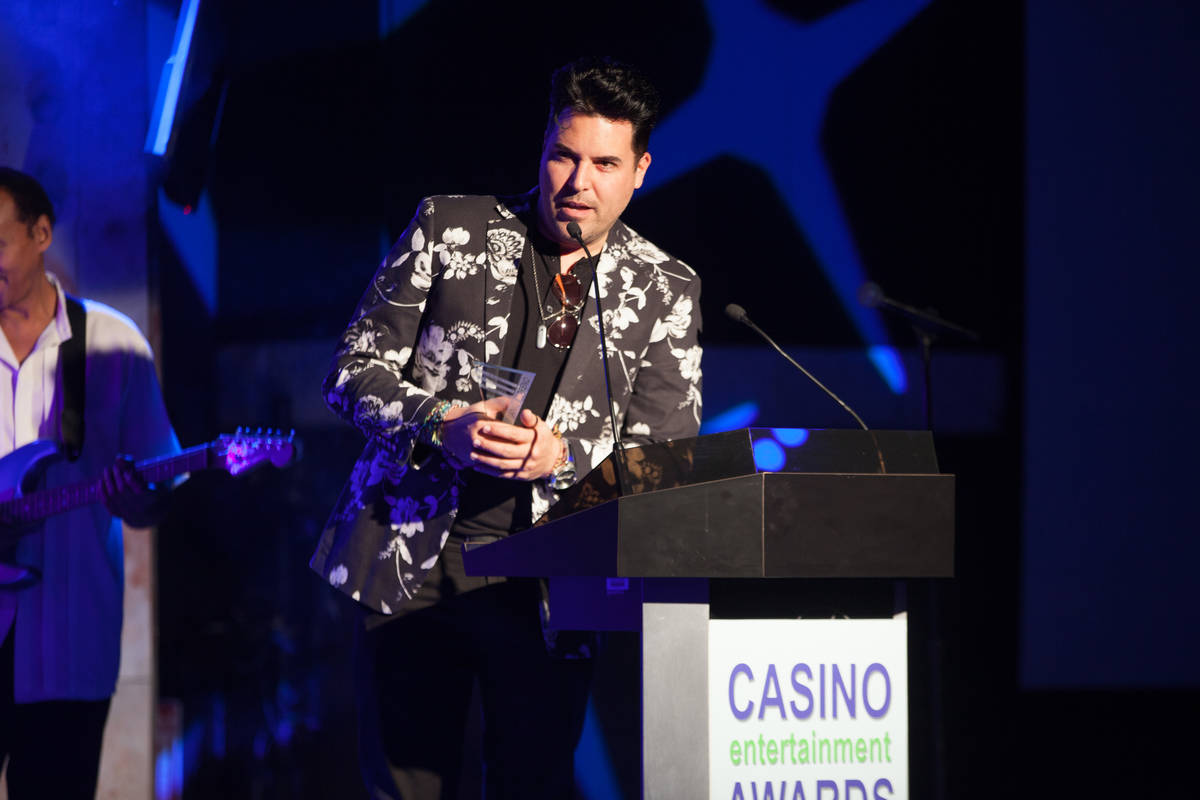 The Kats! Bureau at this writing is in the South Point Showroom, and I mean right at the bar. FizzyWater is flowing. Frankie Moreno is back onstage. He just greeted the crowd of 300 with, “It’s great to be … back!”

That understatement was greeted with a cascade of cheers from Moreno’s FM Army, who sold the room out for Friday, Saturday and Sunday. The capacity will move to the venue’s 450 or so, eventually, seated as it is because tickets were pre-set for this limited occupancy. It’s a technical thing.

This is actually the second show I’ve seen in the past week at South Point. The Righteous Brothers, Bill Medley and Bucky Heard, also wiped out the room. Demand is high, all over town, for live entertainment. South Point Entertainment Director Michael Libonati has hustled to make sure the room is ready for large-scale productions.

To update Moreno, he’s not paused during the pause. The veteran Vegas showman and uber-prolific songwriter has notched 46 No. 1 singles on various iTunes music charts since March 2020.

It’s an incredible run that, frankly, has been a challenge to track. Moreno trails only George Strait (60) and Madonna (50) for most No. 1 singles on the ITunes listings (iTunes officials themselves seem behind this development, and have not responded to my latest request for comment last week).

“It’s like when we had one or two, it was easy for people to get into and understand,” Moreno said Thursday. “But 45? People don’t get it. They think, ‘Oh, you have 45, it must be easy.’ But it’s not easy. You have to create almost constantly.”

In an artistic and systemic flurry, Moreno has been popping out singles on Thursdays, and the FM Army hops on the iTunes Store and sends the singles up the charts.

Moreno has actually issued four albums loaded with just No. 1s, titled “The Number 1’s (Vol. 1),” and so on. His own No. 1 album collection reminds of the old K-tel Records series (“But wait! There’s more!”).

I asked Moreno on Thursday if the quality doesn’t suffer when he’s banging out a new song every single week. I used the McDonald’s philosophy, where you can build an empire by selling billions of hamburgers … but is this great cuisine?

“I can tell you I’m a better songwriter now than I was before COVID,” said Moreno, who can write a song inside eight hours. “If you look at the McDonald’s comparison, I’d say it’s actually like a chef who is preparing different dishes all the time, you know how to perfect the process through repetition. You add seasoning, you taste-test it, and you have the people around you taste it and listen to what they say.

The latest release is actually a rare cover, the Johnny Nash classic “I Can See Clearly Now,” as Moreno took the week “off” to prep for the South Point shows. That song is No. 46, having topped the iTunes blues charts by Friday morning.

The music emanating from Moreno’s the South Point show is varied, tight and keeping the Moreno devotees rapt. We’ve heard some reggae, blues, ballads, a killer little rocker, some surf music. There is no doubt Moreno’s stage show is intact, as he’s slung the guitar, pounded the piano and called out vocals a cappella, away from the mic.

“I have no idea how this is going to go,” Moreno said before the show. “I don’t know how I’m going to feel, or how the crowd will be. It’s totally uncharted territory.” During the performance, he paused and said, “I gotta be honest, I’m nervous as (expletive)!”

But Moreno has kept sharp by performing on stages, with and without audiences, since last spring. He headlined a Facebook Live series at The Amp at Craig Ranch park last May and June. He’s also played underground shows at what we’ll call The Undisclosed Music Club on Thursday nights.

Those shows have raged with free-form musicianship, and are as musically satisfying as anything Moreno has performed prior.

Moreno will finish this weekend, and be back again at South Point. He’ll likely headline Myron’s Cabaret Jazz at The Smith Center, too. But the rest of the year is peppered with road dates, such as those he played with the Indianapolis Symphony Orchestra (we haven’t forgotten he’s classically trained, too) the winter before the pandemic took hold.

There is so much new music, so much to catch up on, with Mr. Moreno. He has played a couple personal favorites, the sentimentally tinged “Good Ol’ Days,” and also “Missin’ You,” from a trip to Italy some time ago. The audience is eating it up, and for the first time in too long, we are feeling it.