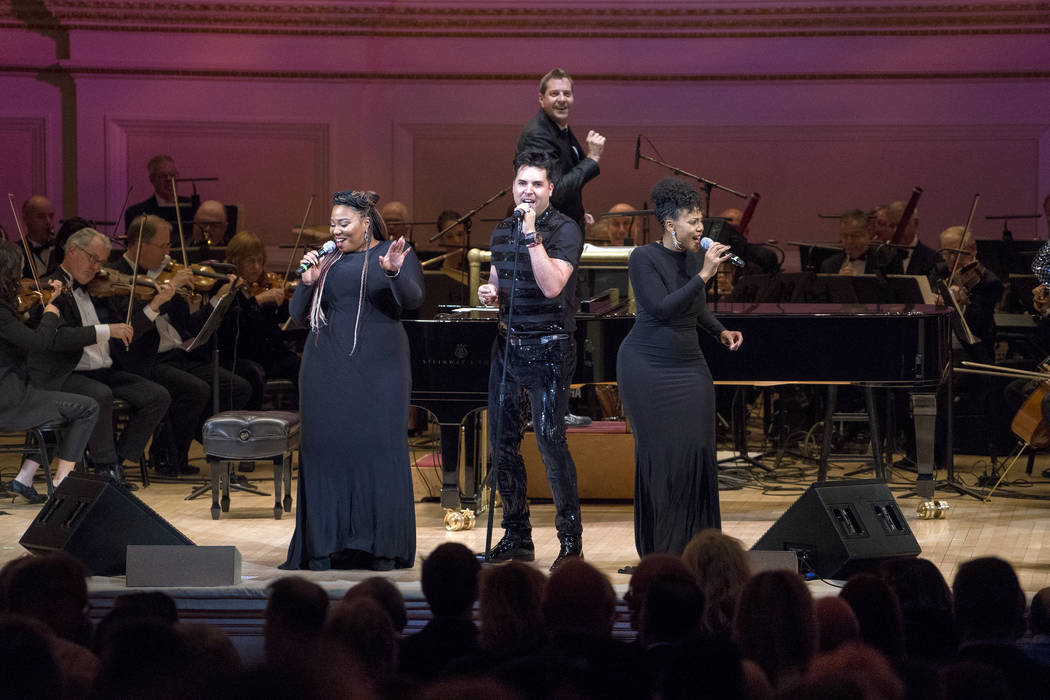 Frankie Moreno performs with the New York Pops during "Roll Over Beethoven: A Different Kind of Orchestra" on Friday, October 19, 2018, at Carnegie Hall in New York. Steven Reineke is the music director and conductor. (Richard Termine)

The guy who plays piano backward at South Point Showroom does pretty well while seated properly, too.

Frankie Moreno has topped the Billboard charts again in two categories this month, with his piano instrumental “Pianoforte” knocking Andrea Bocelli off the No. 1 position both in the Classical Album and Classical Crossover listings in last week’s charts.

Moreno’s momentum has carried through this week as “Pianoforte” remains in the top 10 at No. 5 in Classical, and No. 6 in Crossover.

The chart success is not new and caps a frenzied 12-month period of composing and writing for Moreno, back onstage at 8 p.m. Thursday at South Point. He’s previously charted No. 1 in Billboard’s Contemporary Jazz Album chart with “This Is Frankie Moreno.”

There’s more, too, in this hit parade. A series of Moreno album releases dating to last August has registered on the Billboard Heatseekers charts for emerging artists. In reverse order, “Live in Las Vegas” was No. 1 in June, “This Is Frankie Moreno” hit No. 7 in April; “Naked” released in February, hit No. 3; “Frankie’s Christmas Party,” hit No. 6 in December; and “Broke Down in Paradise” was at No. 10 in August 2018.

Twice, Moreno has reached the top 100 in the Billboard Current Album charts for all categories. “Live in Las Vegas” reached No. 71, and “Pianoforte” opened at No. 70.

Moreno has thus found an elusive formula for releasing entire albums that almost are guaranteed to sell tens of thousands of copies through “hard” sales as CDs or downloads. The Frankie Moreno Fan Club continues to grow its database of e-mails, has eclipsed 100,000 members this year and continues to expand.

“The fan club happened completely organically and they are turning out to the shows and buying music,” Moreno says. “They take pride in all of this success.”

Whenever Moreno performs live, either at South Point or Myron’s Cabaret Jazz in Las Vegas or in one of his performing-arts center shows across the country, the FM Army nabs ticket holders and takes down their e-mail addresses. Those folks are alerted to the new release, and they pounce.

As a result, members of the FM Army have become invested, financially and emotionally, in Moreno’s career.

“Whenever we release an album, our message is, ‘Let’s get this on the Billboard charts!’ ” Moreno says. “When it happens and we’re in the top 10, we have a party at the show. Then we do it again.”

Moreno is self-producing these albums, loaded with more than 100 originals he penned over the past year and a half with his brother, Tony, who also produces the albums. Inevitably, such a high-volume process can be likened to a a master chef working at a fast food restaurant. But Moreno insists the caliber of the material is at his high standards — and these albums have effectively captured Moreno’s wide range, including classical crossover, pop, rock, country, alternative, blues and funk.

“I’ve been doing this all my life. I’m a trained musician who wrote all these songs. I have a piano, guitars, bass guitars, drums and a studio at my house,” Moreno says. “If it’s 3 a.m. and I feel like recording because I can’t sleep and my voice feels good, I’ll go record vocals.”

A classically trained pianist, Moreno quickly knocked out “Pianoforte,” which is an instrumental series of previously recorded orifinals. It took him all of six hours to record that music, and it went to No. 1. Up next is a reggae album, another swift hit due out in March.

“If it takes me a year to record an album,” Moreno says, “I’m doing something wrong.”

Peter Pavone of “Vegas Gone Country” at V Theater at Miracle Mile Shops at Planet Hollywood seized the moment when handed a mic during the Q&A segment at Diana Ross’ show at Encore Theater on Saturday.

“You’ve been entertaining people your whole life. I was wondering if I could sing a little something for you.” Ross laughed and took a seat as Pavone serenaded her with an a cappella version of “The Nearness of You,” made famous by Ella Fitzgerald and Louis Armstrong. Find it all on YouTube.