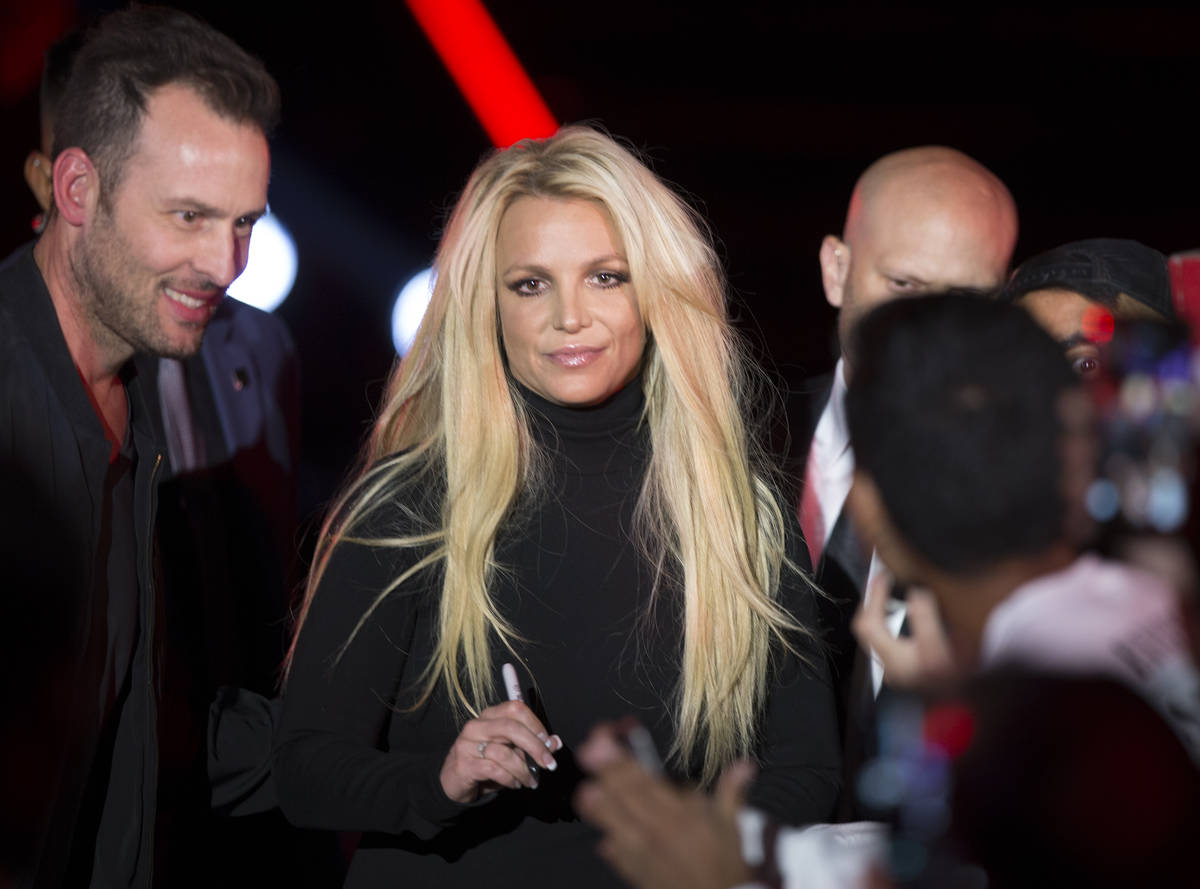 Britney Spears during an event to announce her new residency at The Park Theater at Park MGM on Oct. 18, 2018, outside T-Mobile Arena in Las Vegas. (Benjamin Hager/Las Vegas Review-Journal) 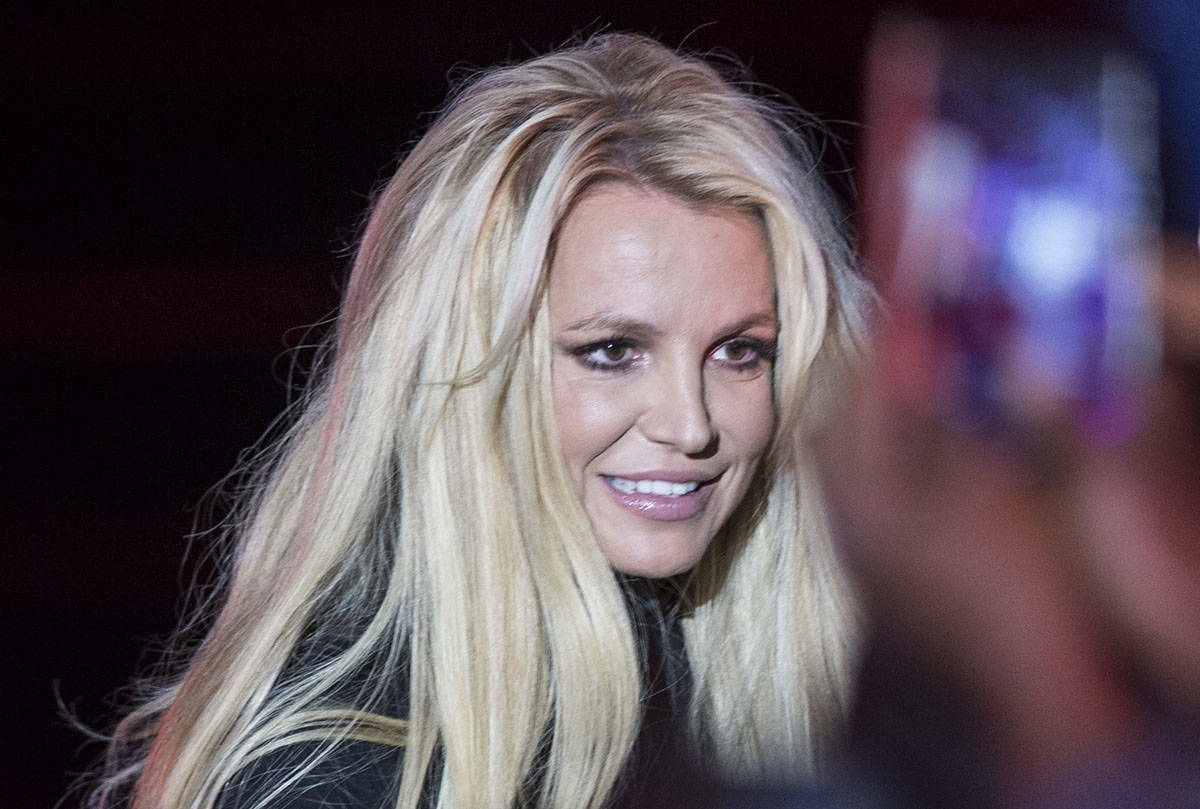 Britney Spears signs autographs during an event to announce her new residency at The Park Theater at Park MGM on Thursday, Oct. 18, 2018, outside T-Mobile Arena, in Las Vegas. (Las Vegas Review-Journal) 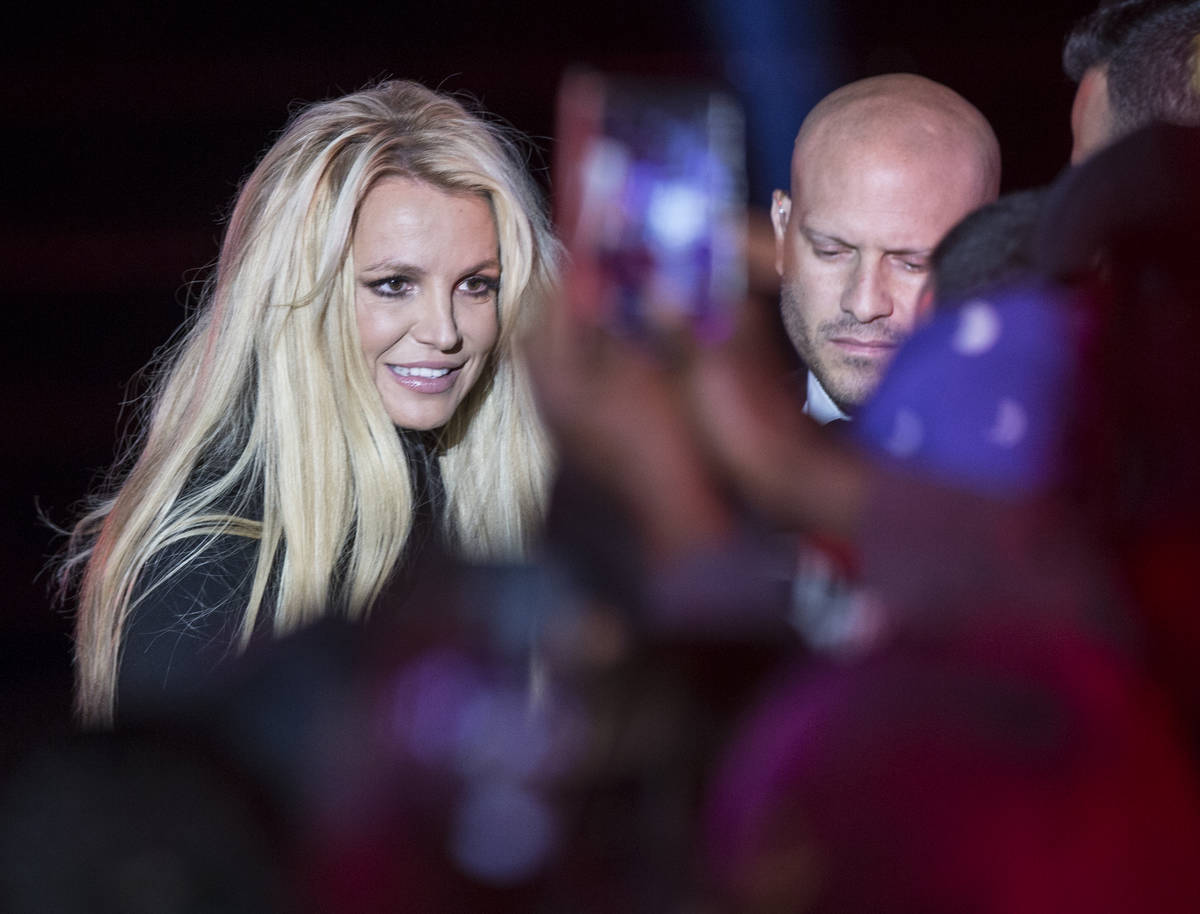 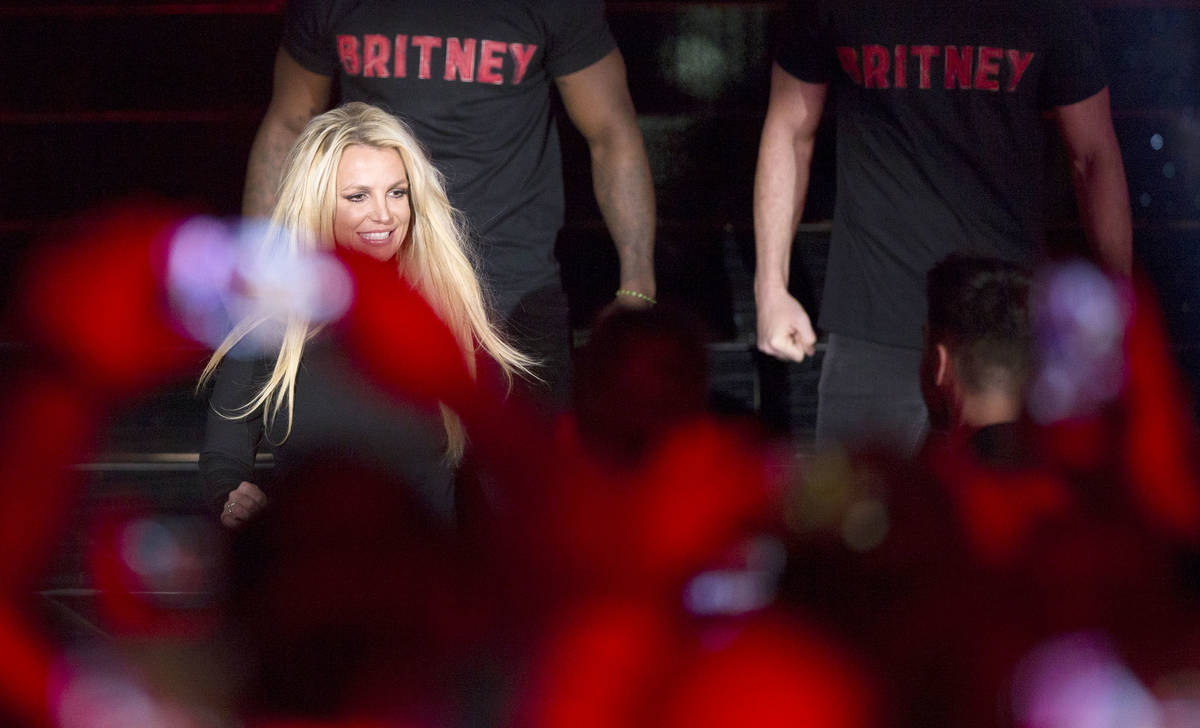 Britney Spears signs autographs during an event to announce her new residency at The Park Theater at Park MGM on Thursday, Oct. 18, 2018, outside T-Mobile Arena, in Las Vegas. Benjamin Hager Las Vegas Review-Journal 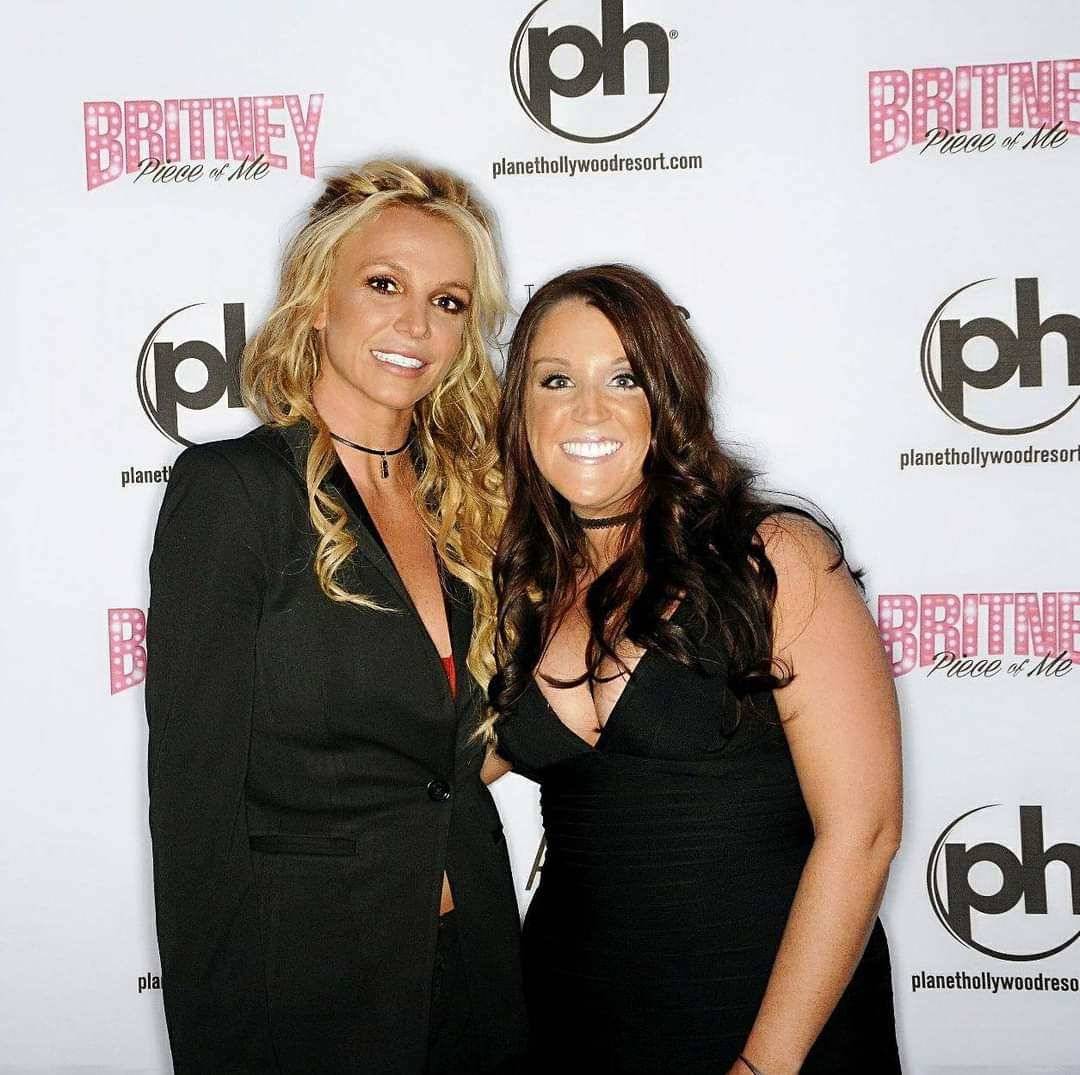 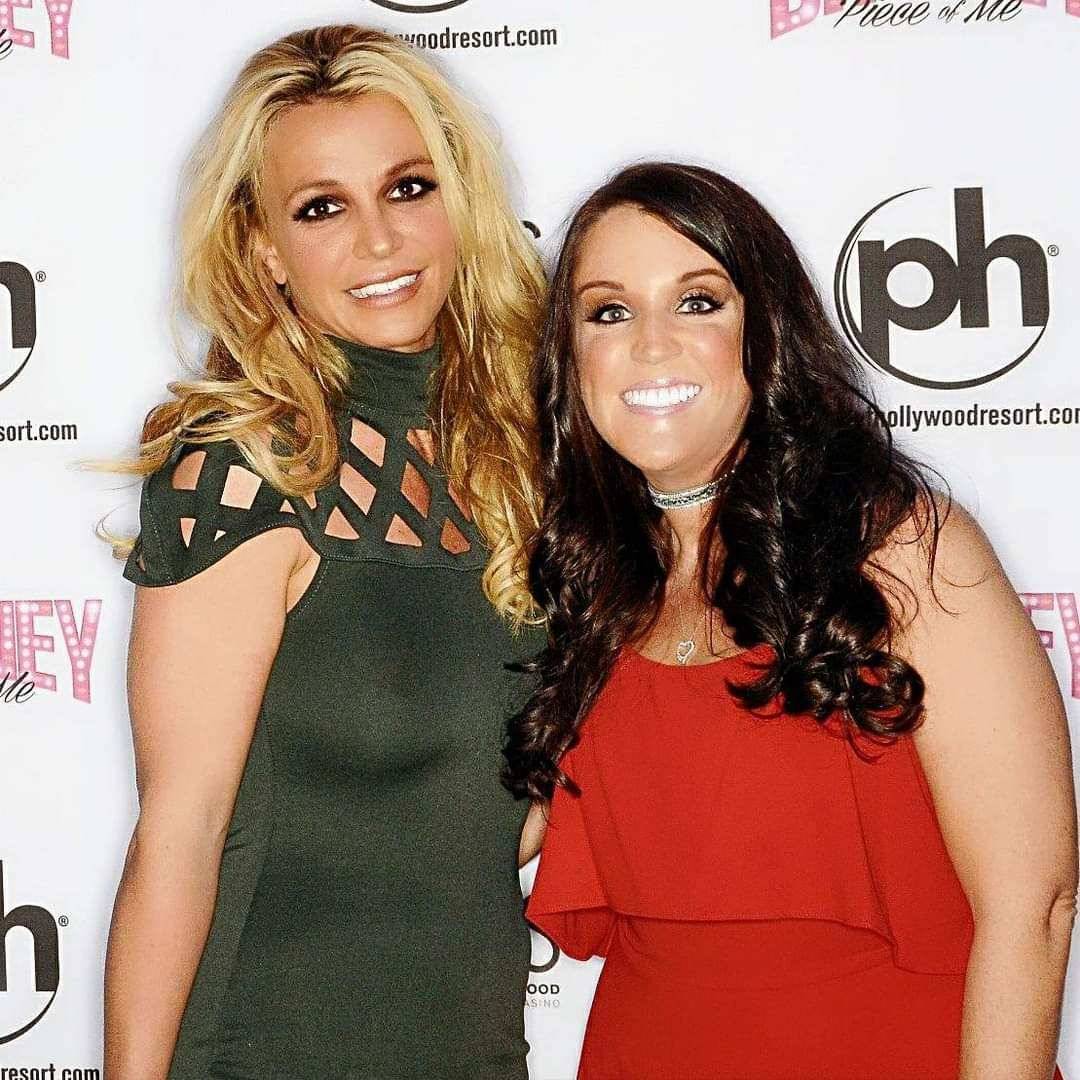 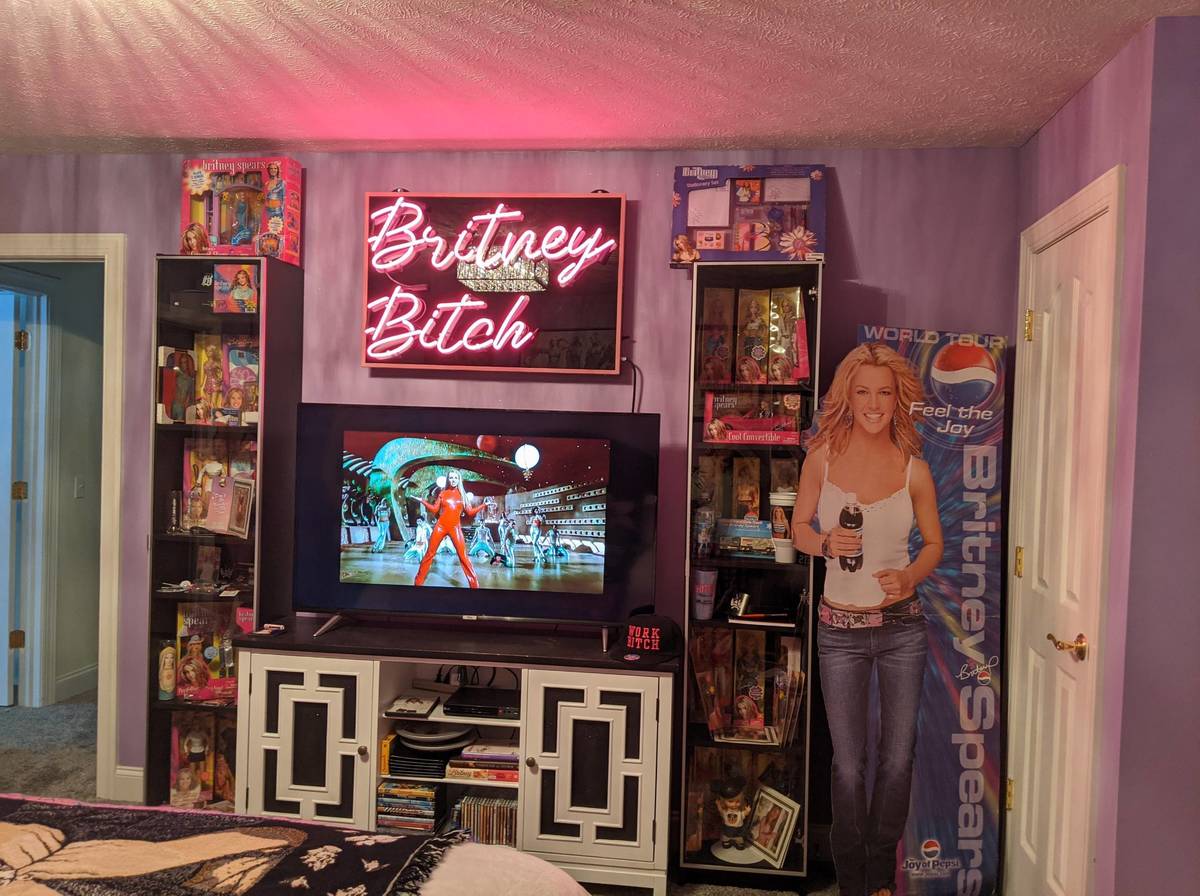 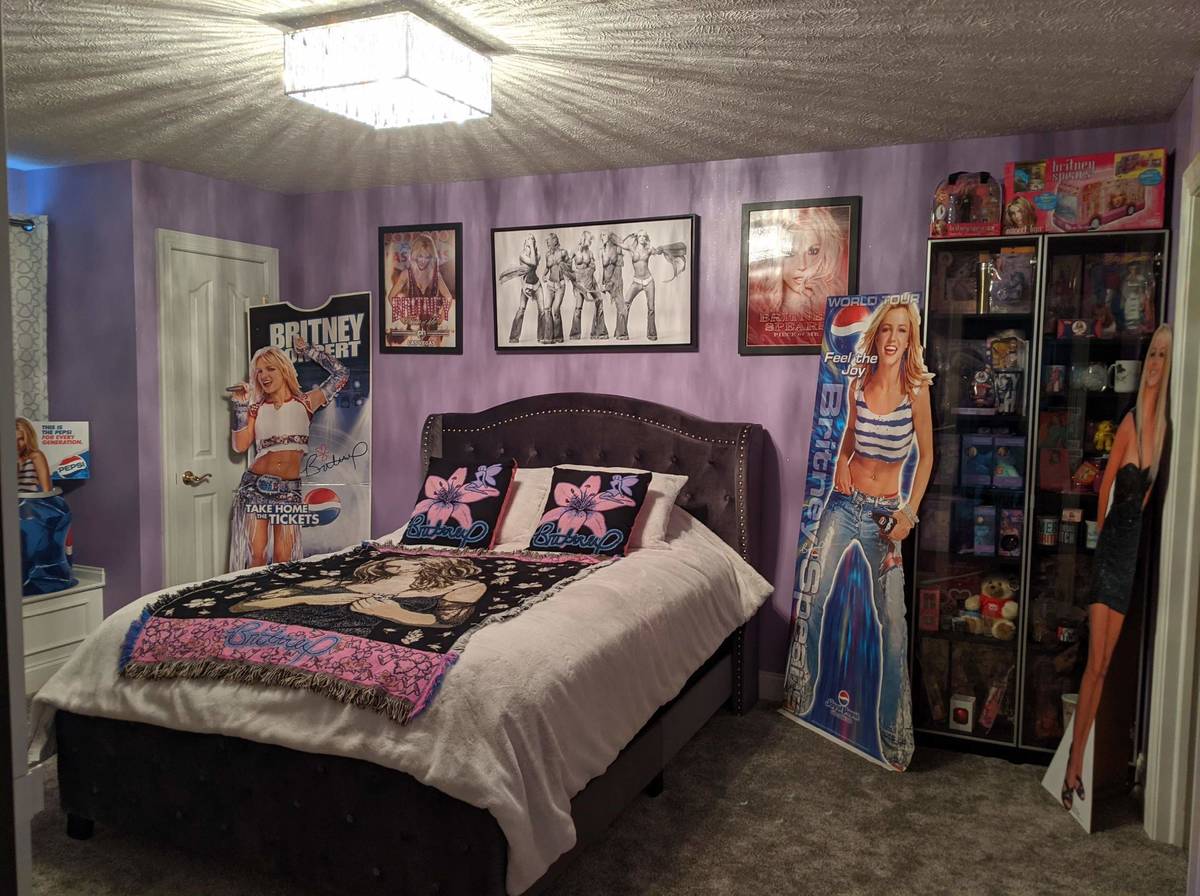 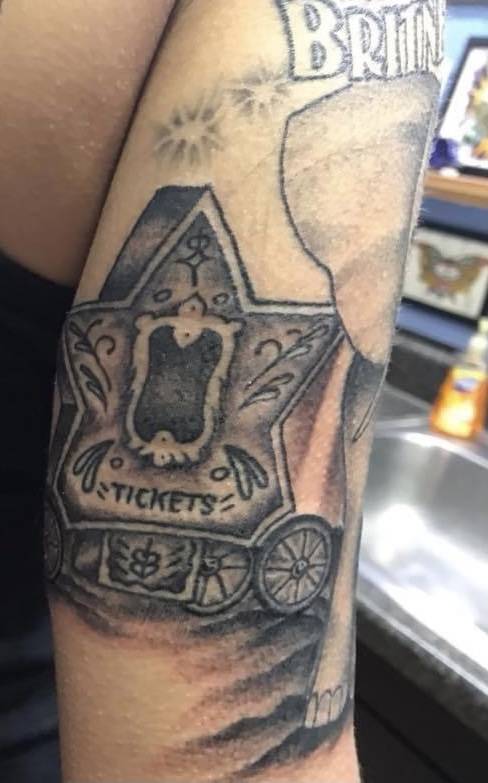 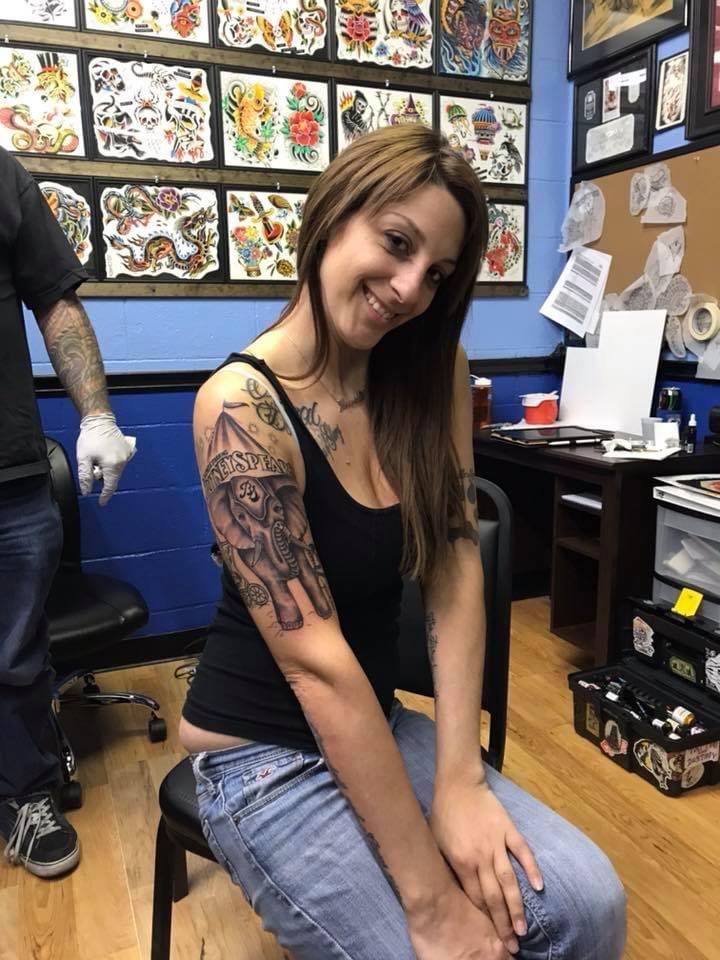 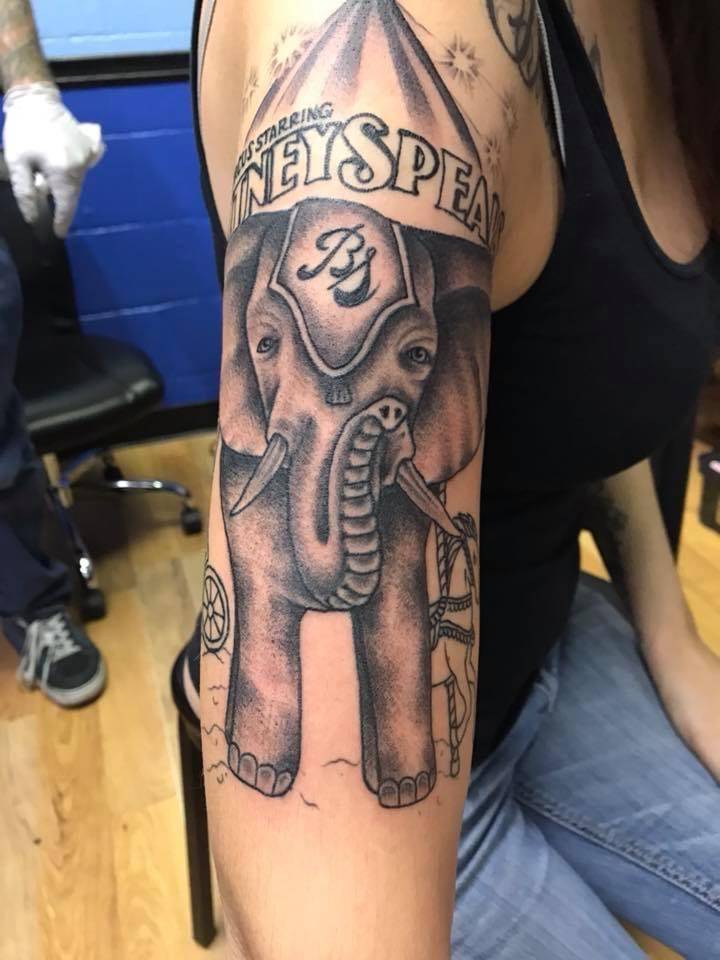 In the heady days before COVID, the “Britney Spears: Domination” announcement on the Las Vegas Strip was a show of force. The spectacle carried all the hype of a Thunderbirds F-16 flyover.

Spears’ management and MGM Resorts International PR pushed the message across Las Vegas, amassing a crowd of Spears’ devotees to welcome her back to a Strip residency production.

The fans turned out. Jessica Johns, a dedicated Spears supporter who co-hosts “Reality Check” on KCOR digital radio, was there that night. She showed off her series of more than 30 Spears tattoos and waited eagerly for her idol to show up.

“I’ve loved her since I was 5 years old, and she was on ‘Mickey Mouse Club,’” Johns said, adding, “My body is literally covered in Britney lyrics.”

“The way I explain it is, I grew up with her,” Johns continued. “That’s the reason I have so many Britney tattoos. People come and go, friends and spouses, but Britney is forever.”

Johns cheered along with the hundreds of Spears fans at Toshiba Square that night in ‘18, as the star arrived after a long video of her top-selling singles was played across the Park MGM hotel tower. Fireworks blossomed over the scene. On cue, Lopez shouted Spears’ name. Many fans and even media members on hand anticipated a performance of some sort, or at least an auditory reference from Spears about the upcoming “Domination” shows.

Instead, the pop superstar was led down a set of stairs, across a red carpet through the middle of the crowd. She never broke stride. That was the last Las Vegas saw of Spears in public.

The walk continues. Spears shut down “Domination” the following January. She announced that her father’s serious health problems were the reason. She said she wanted more time with her family, too.

Crystal Wellman, an uber-Spears fan from the Cleveland area, was especially sad to know “Domination” had been ditched. She had spent $8,000 on pair of opening-night tickets at an onstage cocktail table. Wellman has proven her passion. She saw Spears perform 33 times in “Piece Of Me” at Axis/Zappos Theater, and met her hero five times in VIP meet-and-greets.

“I became a fan around the time of ‘Baby One More Time,’ when you feel young and ugly and you see her and it’s, ‘Wow, I want to be like her,” Wellman said in a phone chat Friday. “There was a little bit of envy, infatuation. She was funny, relatable, everything you wanted to be. You wanted to be her friend. She was like the big sister I never had.”

Wellman has created an entire room dedicated to Spears, with vintage dolls and posters. A signed “Baby One More Time” poster is among her favorite items. The collection, estimated to be worth about $40,000, is insured separate from her house.

The third time Wellman met Spears, the star told her, “Nice to see you again, Sweetie. Enjoy the show.”

“I almost fainted,” Wellman said. “At least she remembers my face. I’ll take it.”

Lest we forget, Spears help cut a path for future Strip resident headliners to follow Celine Dion’s success at the Colosseum at Caesars Palace. Spears’ “Piece of Me” residency at Axis/Zappos Theater at Planet Hollywood, running from 2013-2017, was an unqualified commercial success, grossing nearly $138 million with more than 900,000 ticket sold in 248 shows.

In a Twitter message last week, Spears returned to that soaring show, posting, “Can’t believe this performance of Toxic is from 3 years ago !!! I’ll always love being on stage …. but I am taking the time to learn and be a normal person ….. I love simply enjoying the basics of every day life !!!! @NYRE.”

And in an apparent reference to the New York Times’ documentary, she posted “Each person has their story and their take on other people’s stories !!!! We all have so many different bright beautiful lives ��������!!! Remember, no matter what we think we know about a person’s life it is nothing compared to the actual person living behind the lens ��✨ !!!!”

Spears has lived outside the Vegas radius ever since the “Domination” announcement. Lady Gaga, Cher, Bruno Mars and Aerosmith have all starred in Park Theater’s rotation of headliners lineup since “Domination” was pulled. All are expected to be back, post-pandemic.

Other notable resident stars will be announced in the coming months for Park Theater. But don’t expect Spears to be among them. At this moment, there are reportedly no discussions for Spears to return in residency to the Strip, where she played to nearly a million ticketed fans in a four-year stretch less than a decade ago.

Las Vegas is but one of the settings for “Framing Britney Spears.” As the documentary reminds, the pop icon’s fans remain deeply and emotionally tied to her success, and especially her mental well-being. The “Free Britney” movement has supported Spears in her contentious under a legal conservatorship, which she has lived under since 2008.

The unplugging of “Domination” and Spears’ uncertain future as a live performer has seemed to only strengthen that community’s support.

“The Free Britney movement started on IG when, for a good 10 days, nobody heard from Britney at all. She just vanished,” Johns says, referring to the period two years ago when Spears was admitted to a mental-health facility. “We started the #FreeBritney hashtag, then team Britney removed the post. But the documentary proved us right, the whole time.”

Can’t believe this performance of Toxic is from 3 years ago !!! I’ll always love being on stage …. but I am taking the time to learn and be a normal person ….. I love simply enjoying the basics of every day life !!!! @NYRE pic.twitter.com/Kthh9fIWtJ

Meaning, the Free Britney population, which has amassed outside the Los Angeles courtroom during these proceedings has wanted Spears freed from the terms of her conservatorship, which until last fall has been uniformly controlled by her father.

A conservatory arrangement is typically made for an elderly or infirmed person, or someone with cognitive impairment. It’s not for a contemporary music superstar who fronts world tours, releases hit albums and sets sales records on the Las Vegas Strip.

Within the past year, Spears’ attorneys have set up the third party Bessemer Trust as co-conservator. In a hearing Feb. 11 in Los Angeles Superior Court, a judge continued that arrangement and overruled Jamie Spears’ objections to Bessemer Trust’s involvement in the conservatorship.

Each person has their story and their take on other people’s stories !!!! We all have so many different bright beautiful lives 🌹🌸🌷🌼!!! Remember, no matter what we think we know about a person's life it is nothing compared to the actual person living behind the lens 📷✨ !!!!

Even so, Spears has not publicly expressed a desire to have the conservatorship removed entirely. And, Spears’ team has contended the conservatorship has helped keep the star focused. In 2019, Spears’ Las Vegas manager, Larry Rudolph, told The Washington Post, “The conservatorship is not a jail. It helps Britney make business decisions and manage her life in ways she can’t do on her own right now.”

It’s a delicate balance, as Spears has seemed to express her desire to be free and normal, including her recent Twitter posts. Concurrently, she happens to be a living brand, a human adaptation an entertainment corporation who made more than $300,000 per show in “Piece Of Me” and was set to make $500,000 per performance in “Domination.”

It would be a multimillion-dollar understatement to say a lot is riding on Spears’ capacity to return to recording and live performances. The 20th anniversary of her “One More Time” album was 2019. She turns 40 next December. As much as social media seems to delight in tearing down superstars, the public also loves a great comeback story.

Britney Spears could be in position to provide just that, post-pandemic.

“A lot of it is, we just love her as a person, we can all relate to her in some way,” Wellman said, sharing a sentiment shared by the “Free Britney” community. “You can break down, but be stronger than you were yesterday. That’s Britney.”