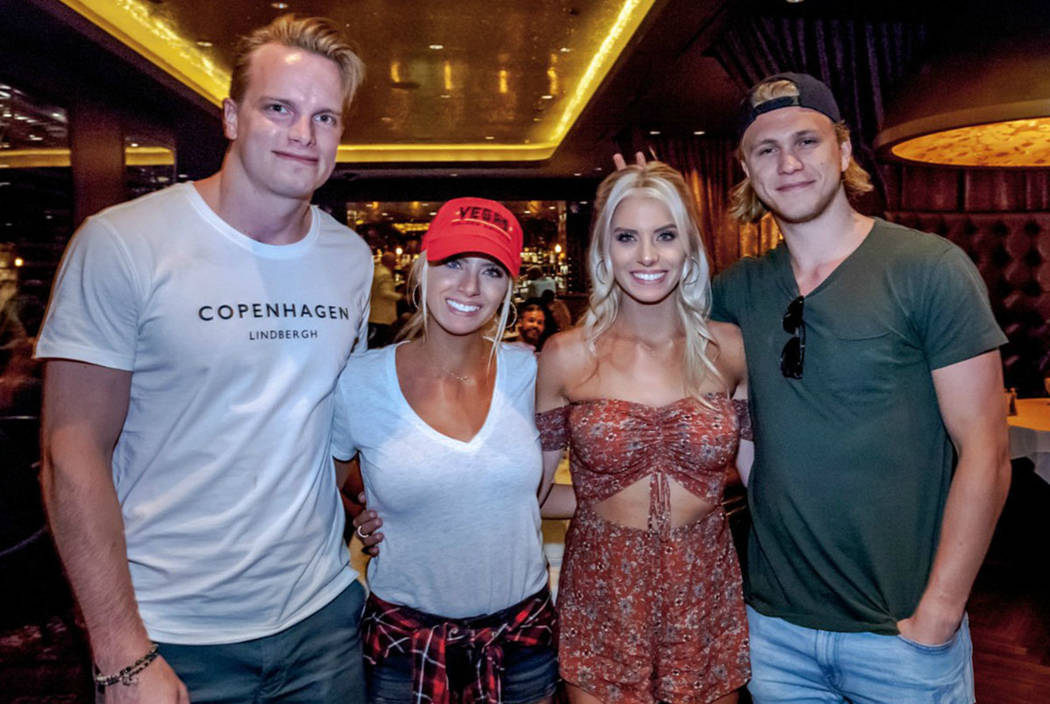 Minutes after they saluted several thousand fans at 3rd Street Stage on Fremont Street in its “Stick Salute to Vegas,” members of the Vegas Golden Knights made their way to dinner at The D Las Vegas.

It was not easy.

The Golden Knights — The Beatles of Las Vegas sports teams — were mobbed inside the casino as they attempted to walk from the street-side entrance to the elevators leading to Andiamo Steakhouse. Trust me on this one; I had to tail a security officer to make a path from the hotel’s Longbar across the casino floor to the escalators.

“Are you with the team?” asked one young woman, who seemed about to close in for a selfie. Another fan mistook a hotel official for General Manager George McPhee, shouting to the man with the D Vegas name tag, “You’re GM of the year!”

More than a dozen members of the team did reach their dining destination. They are certainly familiar with the surroundings. The D is the official downtown hotel of the Golden Knights, as resort co-owner Derek Stevens lived through similar adulation in his days in Detroit, where the Red Wings are kings of the ice.

The D is host to the pre-season “Fan Fest” party set for next September, and hosted the first Fan Fest this season. The hotel also operates Downtown Las Vegas Events Center, site of several official VGK watch parties. Those events have drawn 5,000 fans to the outdoor party parcel. Thursday’s event drew an estimated 7,500 to 3rd Street Stage between the Fremont Street Experience space surrounded by The D, Four Queens, and Fremont hotels

It became evident pretty quickly the team’s ringleader and unofficial ambassador for such events is Tuch, a buddy of D Casino Director Richard Wilk (who has been a busy individual over the past few days, with his 50th “Sopranos”-themed birthday party Saturday night) and a frequenter of the hotel.

“They call me The Mayor,” Tuch said upon introduction. “Mayor Tuch.”

VGK President Kerry Bubolz was asked if had expected the players to become Vegas celebs.

“They are that, and it doesn’t surprise me,” Bubolz said as the “Stick Salute” was about to begin. “These guys are personable people. They have great personalities, and they know that what they do on the ice is not enough. They earn their pay by playing a game, yes, but their success depends on fans coming out and supporting the team. They understand that.”

The dinner was treated as a farewell event as the team disperses for summer vacation. The next official event is in less than 90 days, again in downtown Las Vegas.