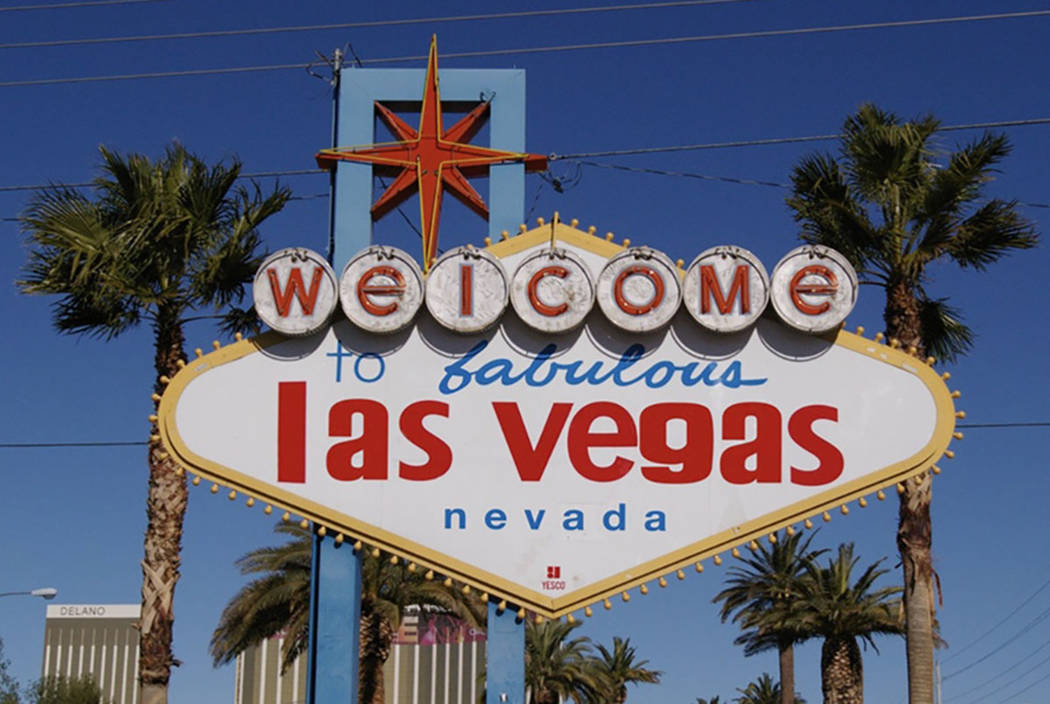 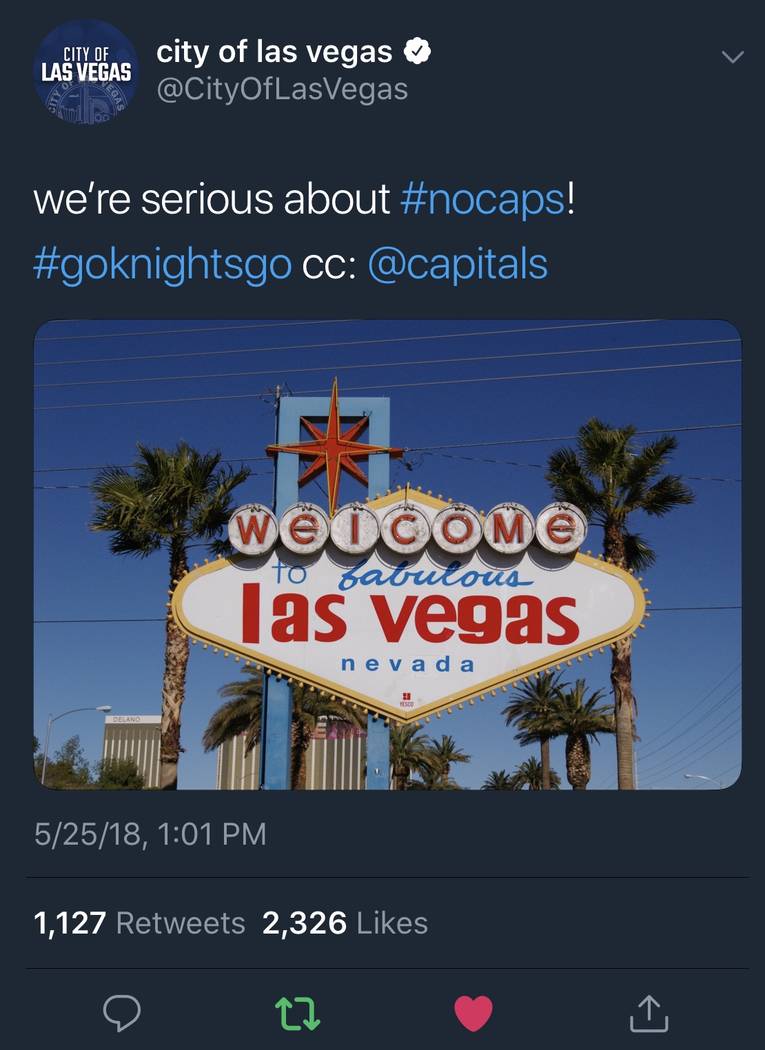 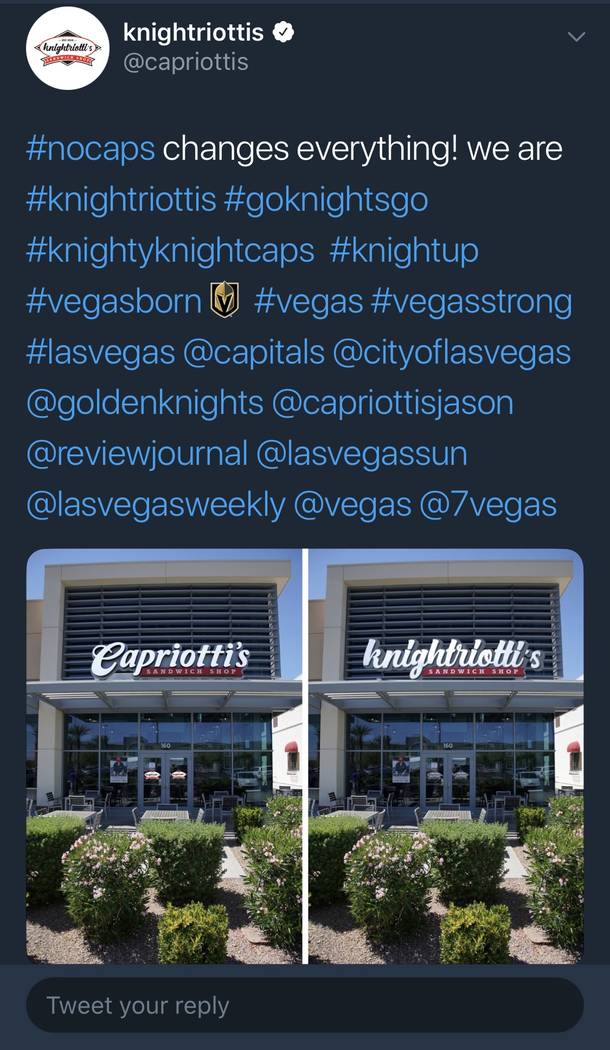 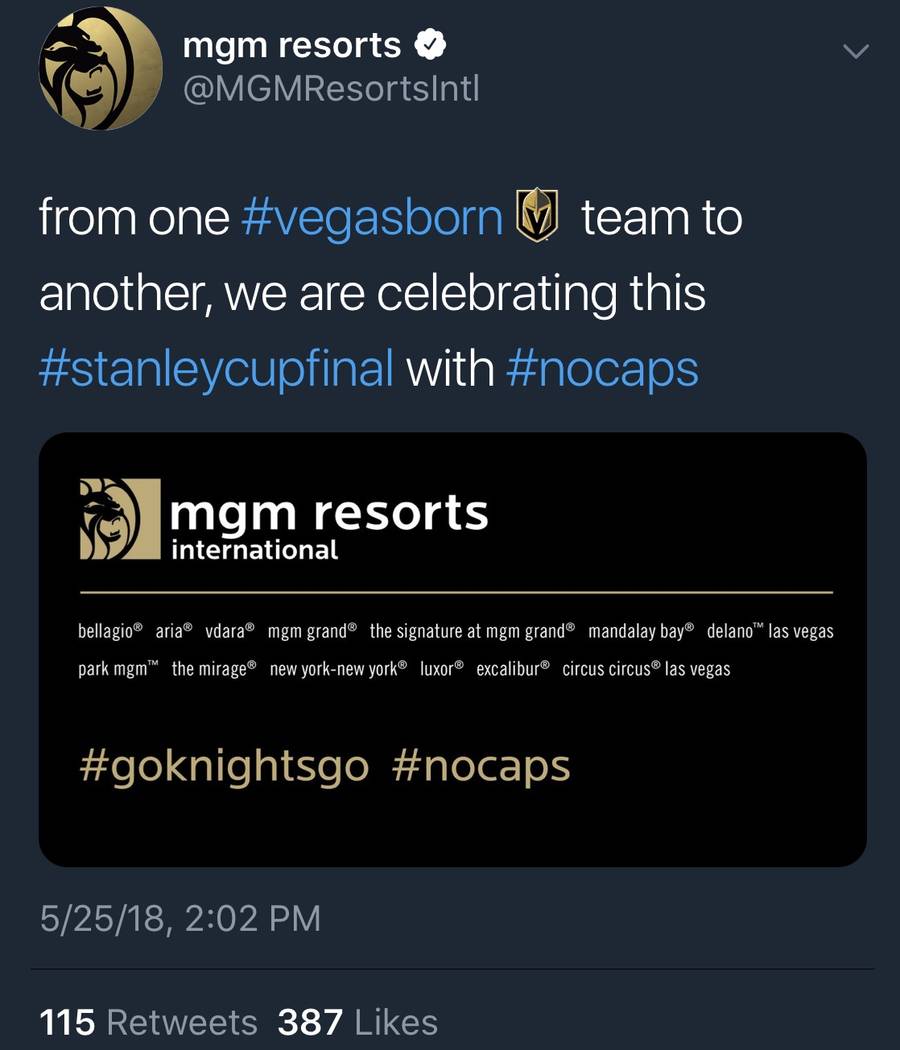 The MGM Resorts Twitter page is shown as part of the #nocaps campaign. (@MGMResortsIntl)

in the spirit of the #nocaps campaign started by vegas golden knights supporters across the city, we’ll play along in this column and use only lowercase letters.

the #nocaps campaign is our community’s response to the golden knights’ opponent in the stanley cup finals, the washington capitals. the team is known as the “caps,” which brings to mind capital letters. so golden knights fans across the city are boycotting uppercase letters in social media posts to show support for the home team.

the effort is an effective counter to the capitals’ own #allcaps trend, which has been ongoing throughout the playoffs. one day we might write an #allcaps column, too, but not today.

as expected, writing in with #nocaps feels weird, similar to throwing a baseball with your off hand, or rubbing your belly while patting your head. i’m just glad the capitals’ nickname isn’t “punctuations,” or this would be impossible.

the first i knew of the civic #nocaps effort was thursday, moments after mayor carolyn goodman made her wager with washington, d.c., mayor muriel bowser. mayor goodman had just ended an interview with chet buchanan on his 98.5 kluc-fm radio show, where the two talked of a “no caps” campaign on social media.

goodman’s original tweet: “happy to announce we have a #stanleycupfinals bet with @mayorbowser in dc. losing city’s mayor will wear winning city’s jersey and send a local treat basket. you may have noticed there are #nocaps in this tweet. we are cap free in @cityoflasvegas. #nocaps #goknightsgo.”

happy to announce we have a #stanleycupfinals bet with @mayorbowser in dc. losing city’s mayor will wear winning city’s jersey and send a local treat basket. you may have noticed there are #nocaps in this tweet. we are cap free in @cityoflasvegas. #nocaps #goknightsgo

since then, all of the mayor’s social media posts are #nocaps, including, “that’s right #nocaps. we are ready to take on @capitals for the #stanleycup! @goldenknights have been looking good in practice i am told. #goknightsgo!”

that’s right #nocaps. we are ready to take on @capitals for the #stanleycup! @goldenknights have been looking good in practice i am told. #goknightsgo! https://t.co/pABxnrA0Rq

the city of las vegas also fully embraced #nocaps, even adding buoyancy to such routine posts as, “looking for swim lessons? classes are available now starting in early june at pools across the city: http://cityoflasvegas.link/swimlessons2018 #discoverthefun #nocaps.”

on friday afternoon the city posted a digitally altered the famous “welcome to fabulous las vegas” sign with lowercase letters (i wonder what the late betty willis, the vegas icon who designed the sign, would have said about that modification).

i actually trekked to the sign saturday afternoon to make sure it had not actually been changed.

similarly inspired, the las vegas restaurant chain capriotti’s has gone #nocaps and sent an enhanced photo of one of its storefronts, the lettering switched to “knightriottis.” the company’s twitter page has also been renamed “knightriottis” through the stanley cup final.

clark county is in the middle of this trend, too, and sent a news release friday announcing its own #nocaps effort. as commission chairman and nevada gubernatorial candidate steve sisolak said, “this has been a dream season, and it has been great to see the community come together in support of our home team. since the playoffs began, every game day has been an official ‘knight up day’ in clark county, and now we will also be #nocaps during the championship series.”

mgm resorts international is on board, posting an image of all of its las vegas resorts in lowercase (bellagio, aria, mgm grand, new york-new york and the rest). the golden knights’ home venue, t-mobile arena, is in play, at least for select tweets — such as the photo recap of saturday night’s pink concert (wisely without changing pink’s own official twitter handle).

however, the vegas golden knights’ official twitter and instagram pages are not posting in #nocaps. the team is adhering to the usual uppercase/lowercase approach. the golden knights even went all-caps in wishing the las vegas aces wnba team good luck in its home opener against the seattle storm today at mandalay bay events center.

in some instances, the #nocaps trend defies both logic and digital technology. voice-to-text functions such as siri are not equipped to handle #nocaps communication. earlier i received a text from a #nocaps pioneer, which read, “Using Voice to Text. Hence, the Caps.”

it was an explanation from none other than chet buchanan, who always gets a pass.