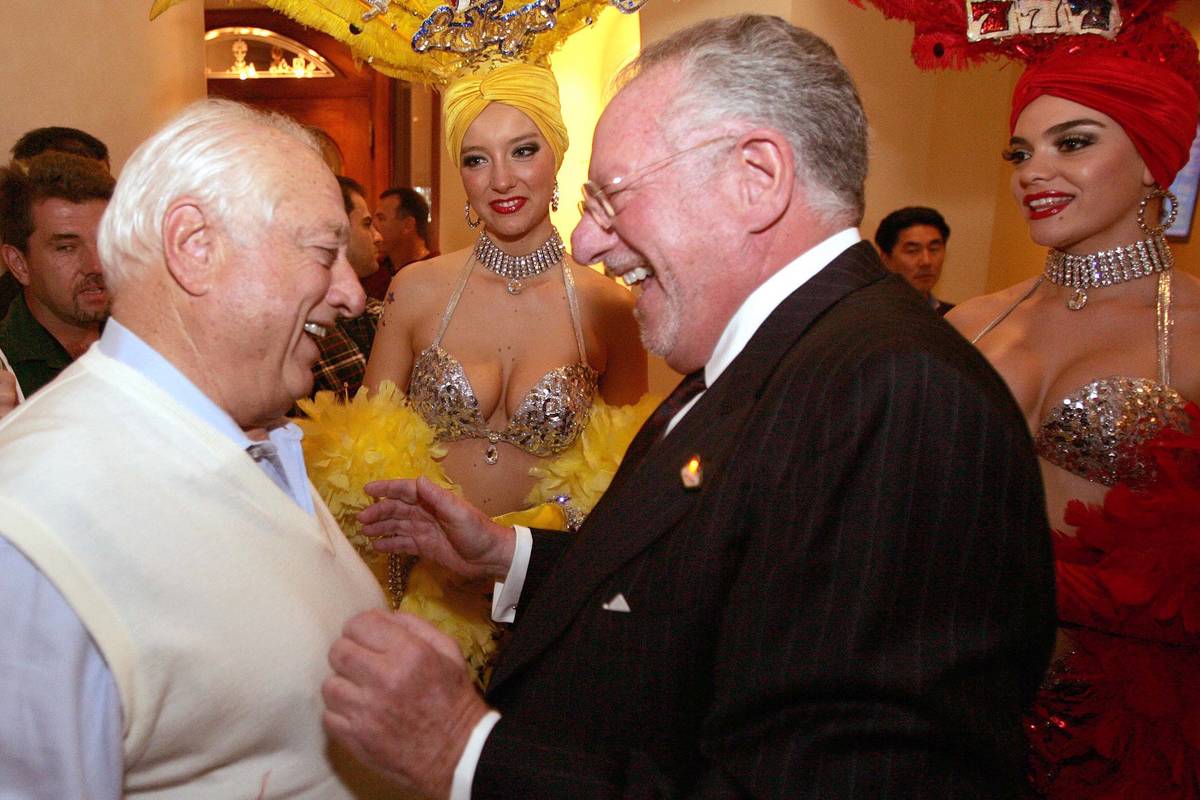 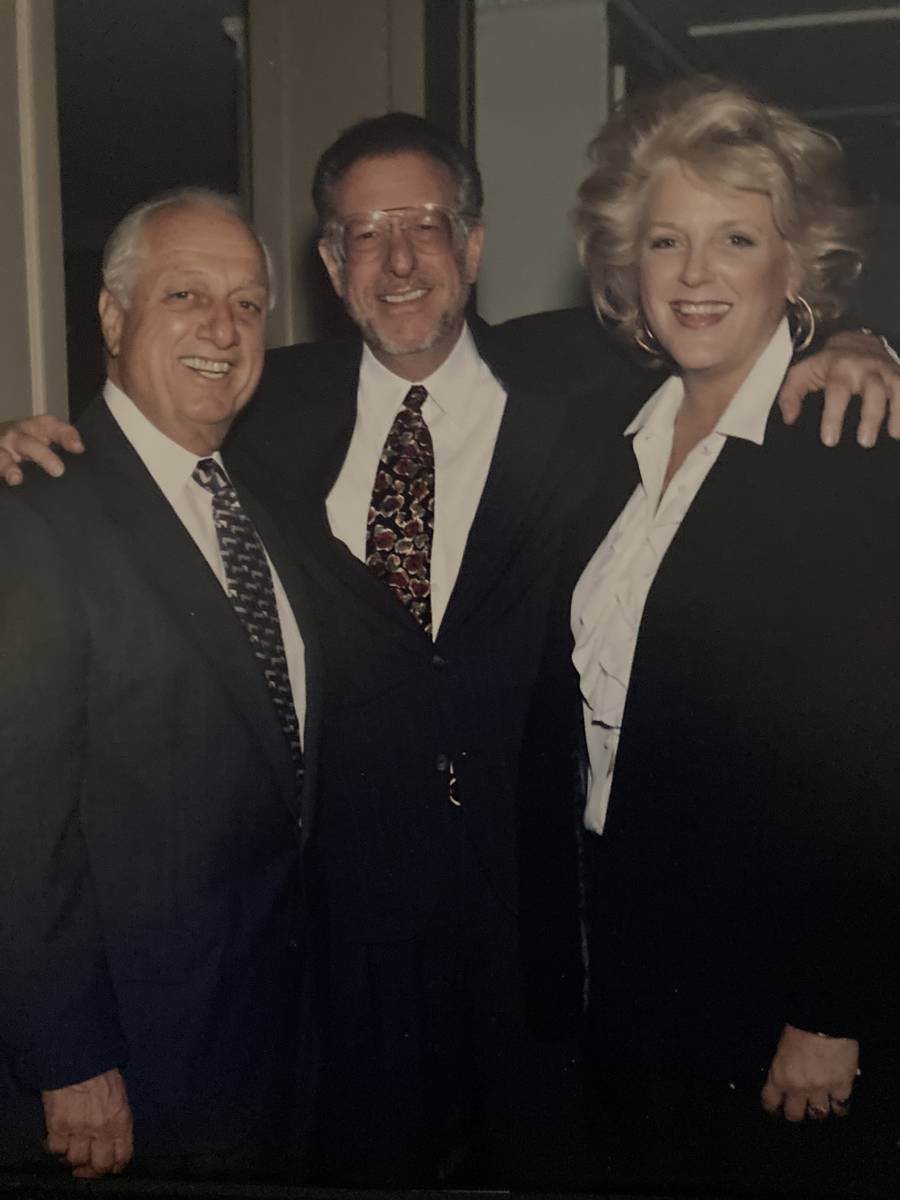 When Oscar and Carolyn Goodman were invited to the 1980 World Series, they were given the royal, and Royal, treatment.

They also carted a Dodger legend to his hotel.

Remembering Tommy Lasorda, who died Thursday at age 93, the Goodmans checked in with a dandy of a tale, which danced like a Charlie Hough knuckle ball toward home plate.

The Goodman family attended Game 3 of the ‘80 series in Kansas City, as guests of K.C. mob overlord Nick Civella.

Oscar Goodman represented Civella, purported leader of the Kansas City crime family (along with his brother, Cork), which were the underground owners of the Tropicana in the ’70s. He helped overturn Civella’s conviction of illegal gambling charges, proving that then-U.S. Attorney General John Mitchell had illegally wiretapped Civella’s phone conversations (Civella later served time for trying to bribe a prison official into a prison transfer for his nephew Anthony).

Oscar Goodman would arrange an early medical release for Civella, just prior to his death in 1983. Of their relationship, the celebrated “mob lawyer” (and later Las Vegas mayor) said, “I certainly admired his intellect. We were as close as friends as a client and attorney could be.”

Civella showed his appreciation by procuring and gifting the entire family front-row tickets to the first World Series game at Royals Stadium.

In tow were the Goodmans and their four children, between the ages of 7 and 11. As the clan arrived at McCarran Airport, Oscar Goodman spotted Lasorda, then the Dodgers manager, along with shortstop Bill Russell. The father quickly encouraged the kids to get the Dodger manager’s autograph.

“They had no interest in Bill Russell,” he said.

Lasorda obliged, scrawling his signature on either legal notepaper or cocktail napkins. (This is one of the details escaping the Goodmans during the story’s retelling.)

But the kids lost those signatures somewhere between boarding at McCarran and landing for a stopover in Denver. Once more, they rushed Lasorda, who signed for the kids a second time. It was late, past 11 p.m., when the connecting flight landed in Kansas City. Lasorda and the Goodmans (the parents and kids Oscar Jr., Ross, Eric and Kara) were the last passengers in baggage claim.

Taxicabs were scarce, but the Goodmans had a car, or maybe a limousine, waiting to take them to their hotel.

This detail, too, was a point of contention for the couple, who argued late into the night and again Saturday morning about whether it was a cab or a limo (Oscar referred to it as a “limo” in his 2013 book “Being Oscar,” FWIW).

At one point Friday night, current Las Vegas Mayor Carolyn Goodman called the couple’s daughter, Kara Goodman, to jog her memory. At age 7, Kara was the youngest and smallest child, which is why she sat on Lasorda’s lap during the drive in the cab, unless it was a limo.

Talking through the speaker on her mom’s phone, Kara started with, “We got in the limo …” before Oscar cut in with, “Was it a limo? Or maybe a car? Like, a taxi? Make sure, Kara.” Carolyn, cutting off the cross-examination, said she thought it was a limousine.

“It was a limo, or a big car, like a town car,” the mayor said. “It was not a cab. Nick Civella wouldn’t have made us take a cab, Oscar.”

Kara relented, saying, “It was probably a big car, and I sat on Tommy’s lap.” She added, “You can say I was more impressed by meeting Tommy Lasorda than Tony Spilotro.”

Oscar continued, “We were packed in there, whatever it was,” referring to a genuine vehicular mob scene. He also remembered, “Tommy was talking about this young pitcher from Mexico he was excited about, who spoke no English but was going to be a great one.”

The town car, as we’ll call it, dropped Lasorda off at the Hyatt Regency (where, a year later, the walkway collapsed in one of the worst structural accidents in U.S. history). He and Oscar swapped cards. The next night, the Goodmans were lined up along the third-base line, near home plate “close enough to touch the players,” as Oscar recalled.

Who was seated 15 rows back? Tommy Lasorda, whose team had played in the World Series just two years earlier. He spotted his fellow town car passengers in the front row, his face showing shock.

“He looked at us like, ‘Who is this family?’” Oscar said. “Then he reached into his pocket and pulled out my card and shook his head and laughed.”

Beginning that night, Lasorda and the Goodmans forged a friendship. As founder of The Meadows School, Carolyn Goodman asked Lasorda to donate a signed baseball to the fundraiser for Creel Field on the school’s Summerlin campus in 1994. Oscar was in Carson City at the time, involved in a difficult trial involving an oral surgeon accused of sexually assaulting patients while they were under anesthesia.

In a story he loves revisiting, Oscar was being knocked around by Judge Archie Blake, who the attorney was convinced wanted to put his client away forever. “None of my motions were granted,” the attorney said. “None of my objections were sustained.”

So Oscar asked his wife to have two more baseballs signed by Lasorda, ASAP. One was for Blake, a noted baseball fan, saying, “To the greatest legal mind of the century.” The other for prosecuting attorney Noel Waters, saying, “To the fairest prosecutor in the land.”

He gave his colleagues the mementos after a weeklong break. As Oscar said, “Suddenly, every motion was granted. Every objection was sustained. I could do no wrong!”

Hyperbole? Maybe. But it proves, even in his passing, Lasorda manages the impossible.