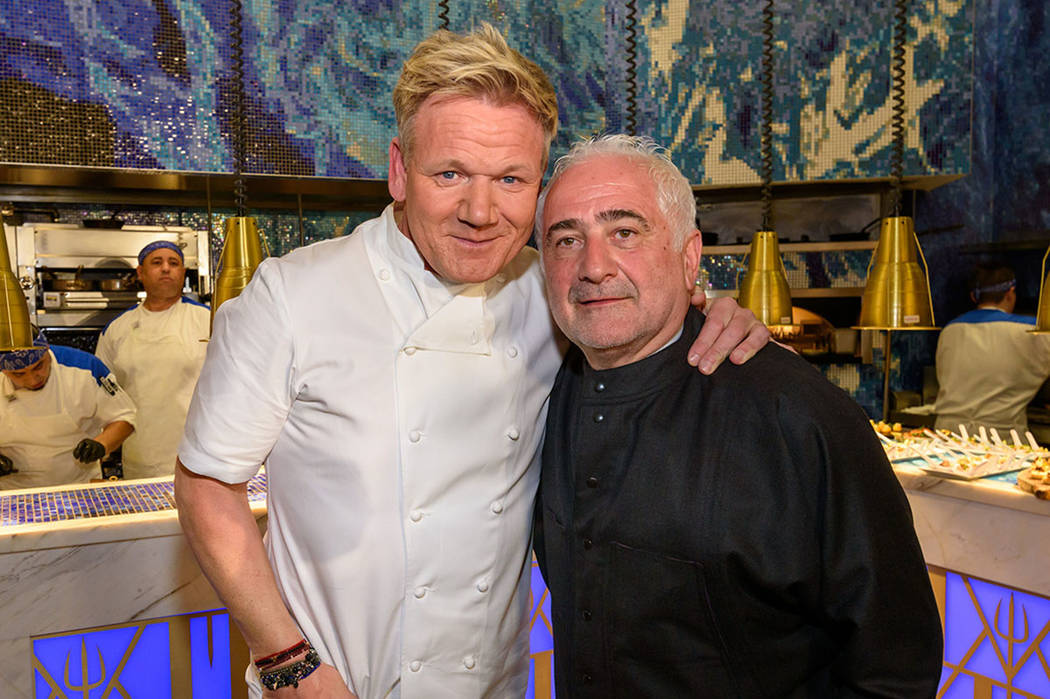 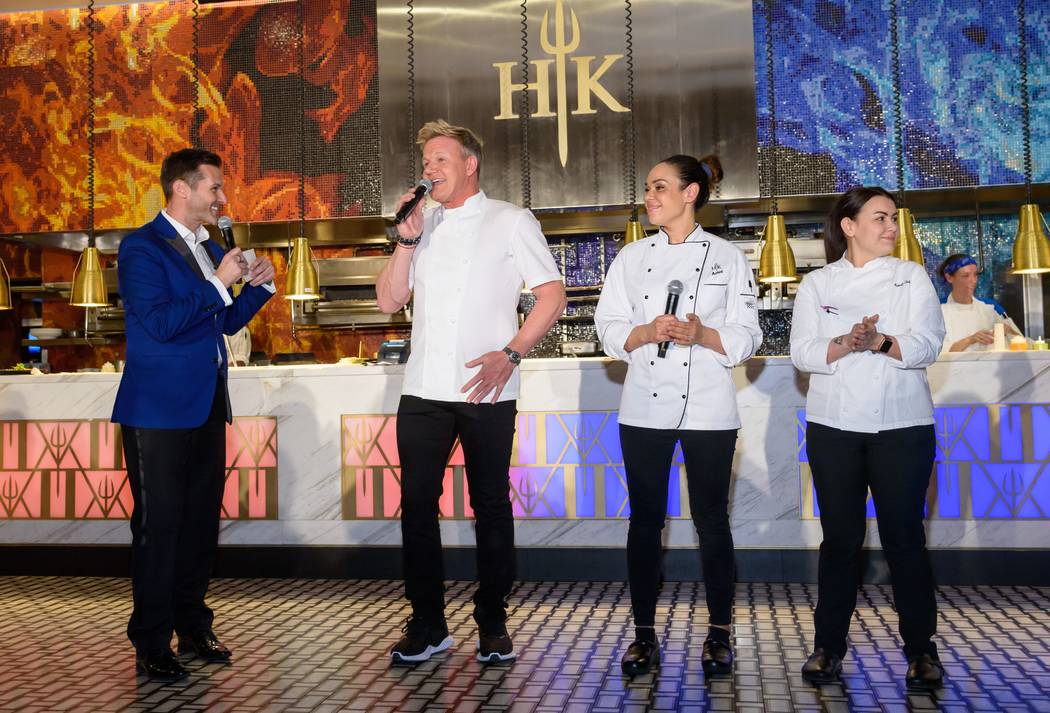 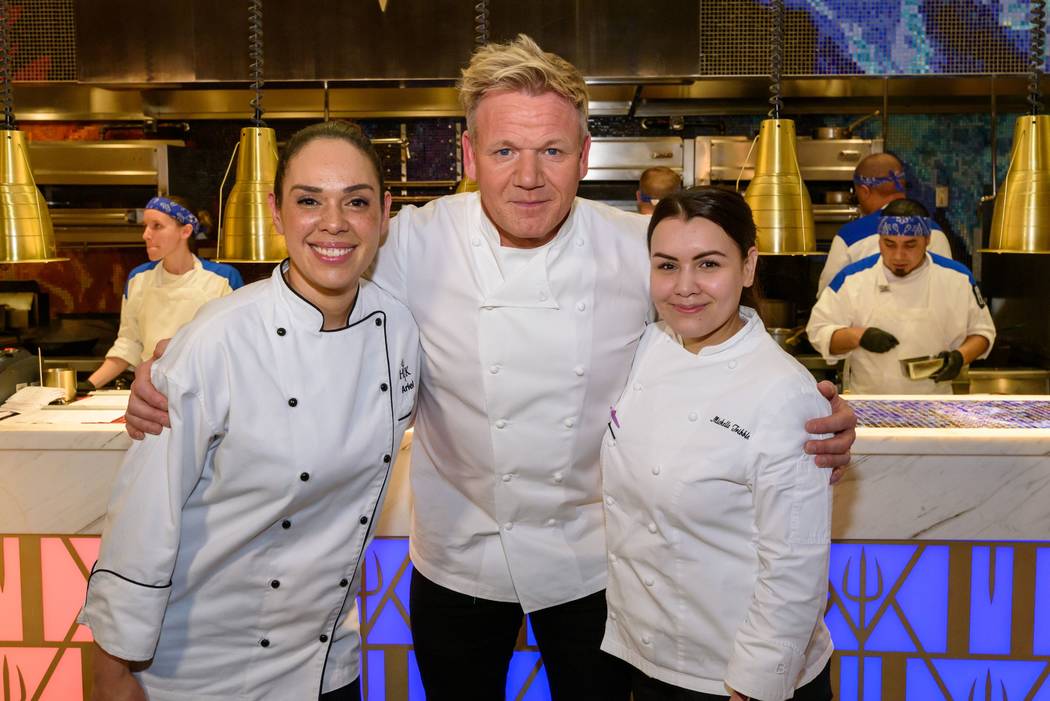 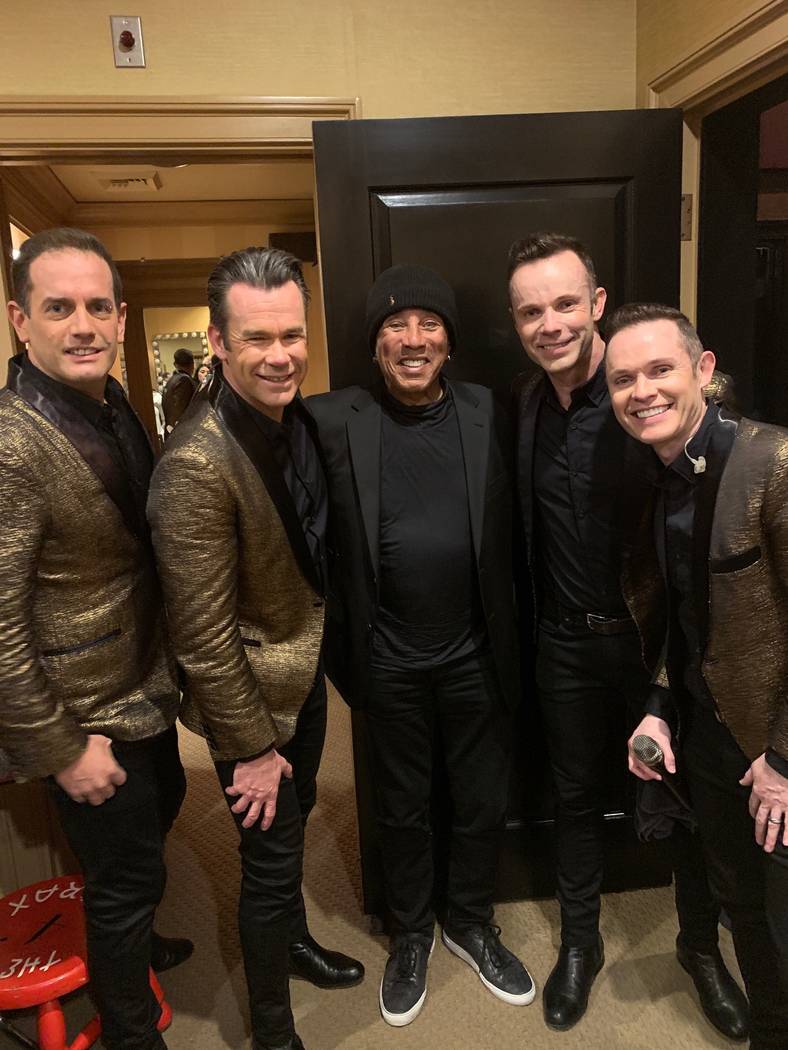 Smokey Robinson is shown with the members of Human Nature, from left, Toby Allen, Phil Burton, Andrew Tierney and Mike Tierney at Sands Showroom at the Venetian on Thursday, Feb. 28, 2019. (SPI Entertainment)

A top position at Hell’s Kitchen at Caesars Palace has been the prize for winners of Gordon Ramsay’s long-running TV series.

The restaurant will soon serve as the show’s stage.

The 19th and 20th seasons of “Hell’s Kitchen” will be staged at Ramsay’s torridly popular, Strip-side restaurant. Ramsay made that announcement Friday night as he held his one-year anniversary party at Caesars.

“We’re very much looking forward to having the show here. We’re going to be creative with the challenges, the rewards, the punishments, and how to present the show in this atmosphere,” Ramsay said after toasting a full house of VIPs at the anniversary party. “We are absolutely going to promote this restaurant, and also Las Vegas. We’ll use a cross-section of Vegas in the show and we are very happy to have it here, and I think viewers will be, too.”

There is a rush order on taping, too: Cameras are supposed to roll in this spring.

Season 18 of “Hell’s Kitchen” just finished, with returning chef Ariel Fox of New York’s Dos Caminos winning the prize of $250,000. Fox also will serve as an occasional guest chef at the Caesars restaurant. The theme was “Rookies vs. Veterans,” and Fox had placed third on the show in 2005.

Also on hand from the Hell’s Kitchen restaurant team were Season 17 champ and Head Chef Michelle Tribble; Executive Chef Jennifer Murphy, and General Manager Louie Maione. Also around the room were superstar chef Guy Savoy (who opened his restaurant at Caesars 13 years ago), who took up a table with Caesars Palace President Gary Selesner and GM Sean McBurney. Fox 5’s Sean McAllister hosted the brief program at the top and introduced Ramsay, who drew a healthy cheer.

The TV series will only boost exposure for Ramsay’s worldwide brand, and his partner company on the Strip.

“We’re going on 15 years, 20 seasons, and there’s no series today that goes even past 10 seasons,” Ramsay said. “We are really proud of how we’ve been able to sustain the show’s popularity.”

A year into his run on the Strip, Ramsay said he still marvels at the attention his restaurant generates.

“I’m still sort of getting used to the fact that at 10:30 in the morning, there is a line outside the door,” said Ramsay, whose Strip restaurant has served more than 400,000 guests since opening in January 2018. “I’m just glad we didn’t go bigger. We’ve got 300 seats. Thank God we didn’t try to go to 400. But our team is great. They hustle. They can handle anything.”

Celine Dion’s mother, Thérèse Dion, took in Celine’s performance Wednesday night at the Colosseum at Caesars Palace. It was the first time Thérèse, who is 91, has seen her daughter perform in Las Vegas since January 2018.

“If I have had the chance to do music, it’s because both of my parents were musical. The put all their dreams aside and gave everything — love attention, affection, a wonderful foundation and lots of music — for me to be able to perform for you,” Celine said from the stage, referring to her mother and her late father, Adhémar-Charles, who died in 2003. “To see her here tonight, it feels like it is an accomplishment for my whole life. I want to say thank you to her, even though she does not speak English, my brother and sister sitting next to her will translate to her. I will say that again to her after the show. I love you, and thank you very much.”

Celine then closed the show with a soaring, a capella rendition of Elvis’ “Can’t Help Falling In Love.” Even writing that gives me the chills. That woman … wow, she’s going to be missed. Last show at Caesars, sadly, is June 8.

Smokey Robinson dropped in on Human Nature, the Australian act he helped lure to Las Vegas a decade ago, on Thursday night. Robinson had not seen the “Jukebox” version of the production at Sands Showroom at the Venetian, but was instrumental in the original “Motown” concept when the production opened at the then-Imperial Palace.

Robinson, who still appears in a video in the show, wrapped a headlining run at Encore Theater at Wynn Las Vegas this weekend.

This reunion was organized informally. Robinson texted Human Nature’s Andrew Tierney during the day Thursday, saying he planned to be at the show. Human Nature’s 10th anniversary of opening at I.P. is next month.

‘It was really great, this close to our 10-year anniversary here in Vegas, to have him come to the show was kind of perfect,” Tierney said. “He hadn’t seen this latest version, and he flipped … totally loved it and humbled us by his praise. By popular demand, we have coincidentally put some more Motown tunes back in the show, too.”

In January, Human Nature signed a three-year extension at the hotel. As Tierney said, “It feels like a perfect blend as we head into the start of the new Venetian deal.”