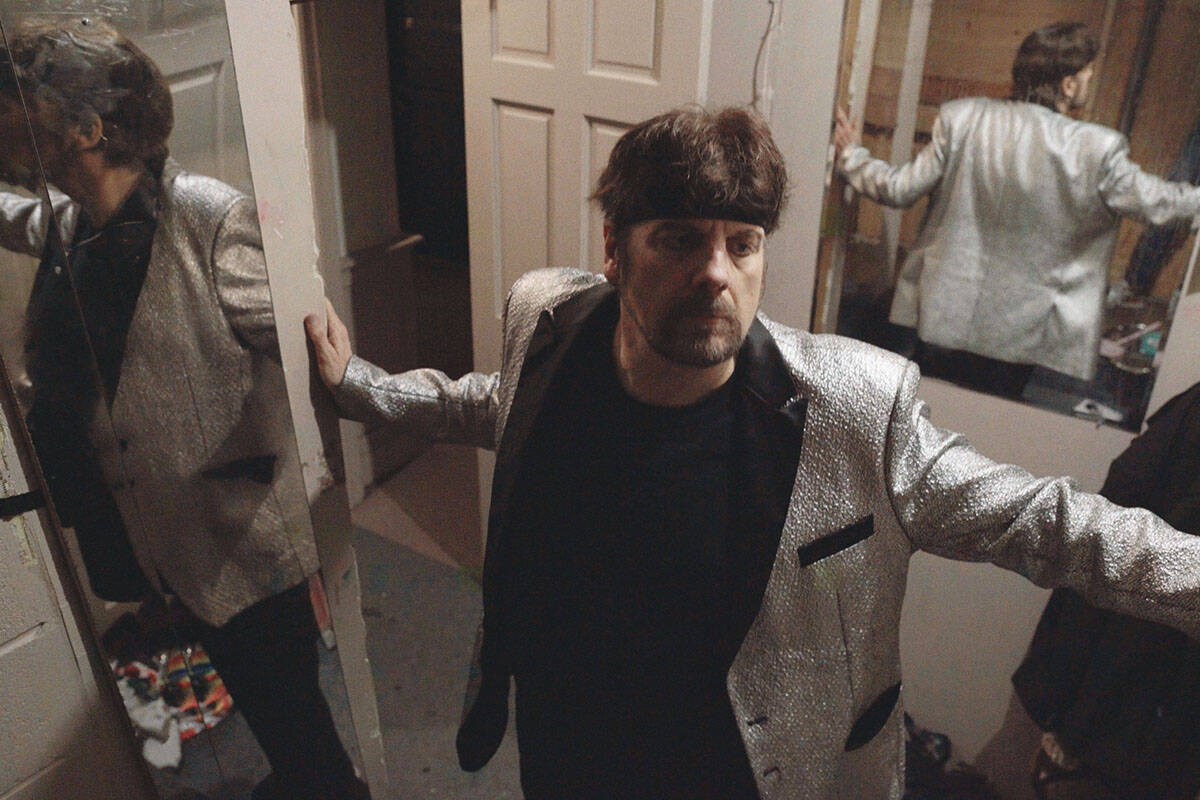 "The Amazing Johnathan," with his irreverent magic act, rose to popularity landing one of the longest residencies in Las Vegas. (Hulu) 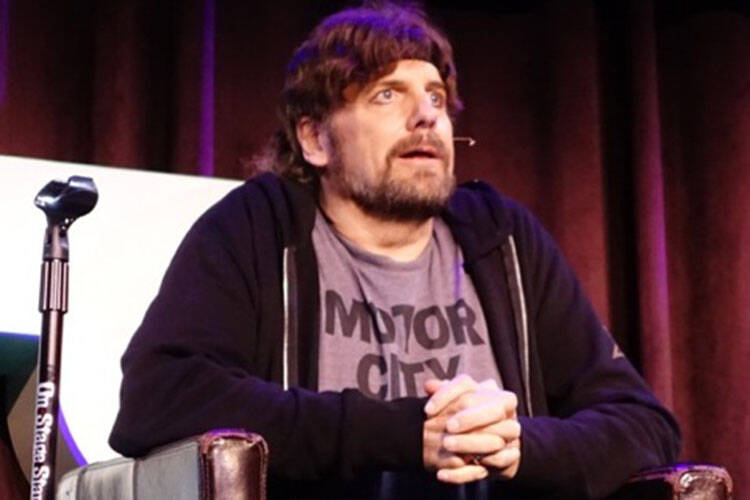 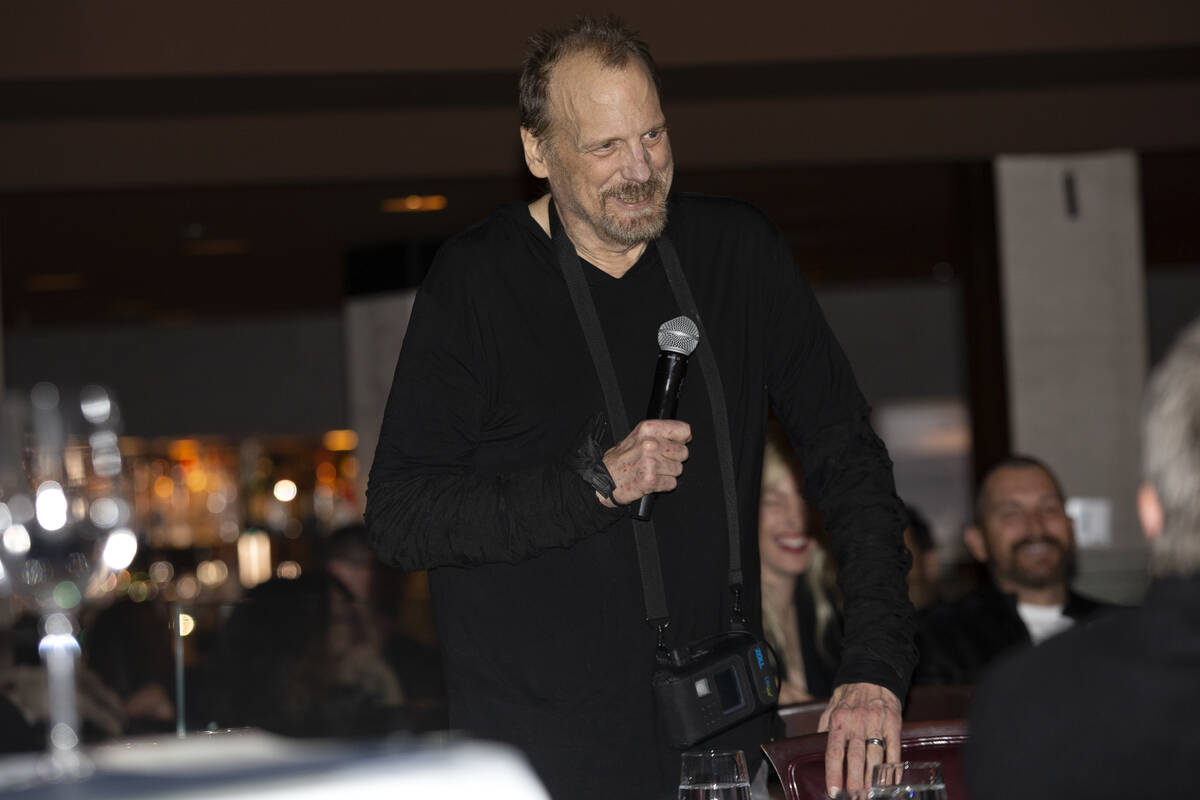 The Amazing Johnathan, a comedian and magician, roasts former Las Vegas mayor Oscar Goodman at Oscar's Steakhouse, on the 10th anniversary of the restaurant's opening, at The Plaza, Jan. 13, 2022, in Las Vegas. (Ellen Schmidt/Las Vegas Review-Journal) 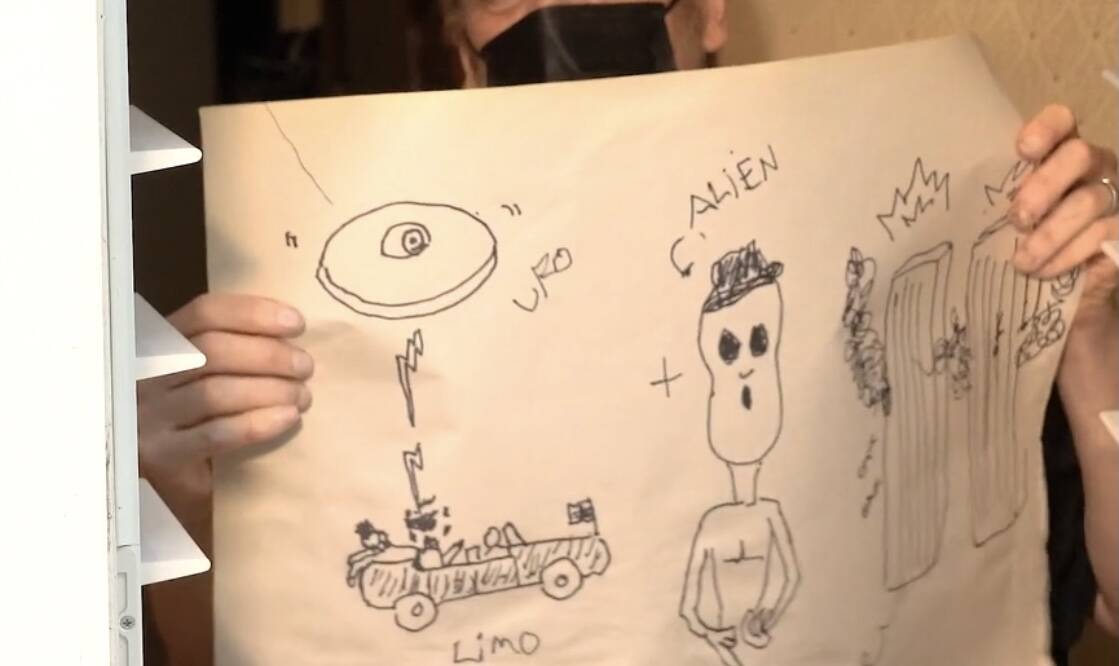 The Amazing Johnathan shows his "conspiracy theory" diagram in the developing documentary "The Night the Lights Went Out in Vegas." (PenRich Productions) 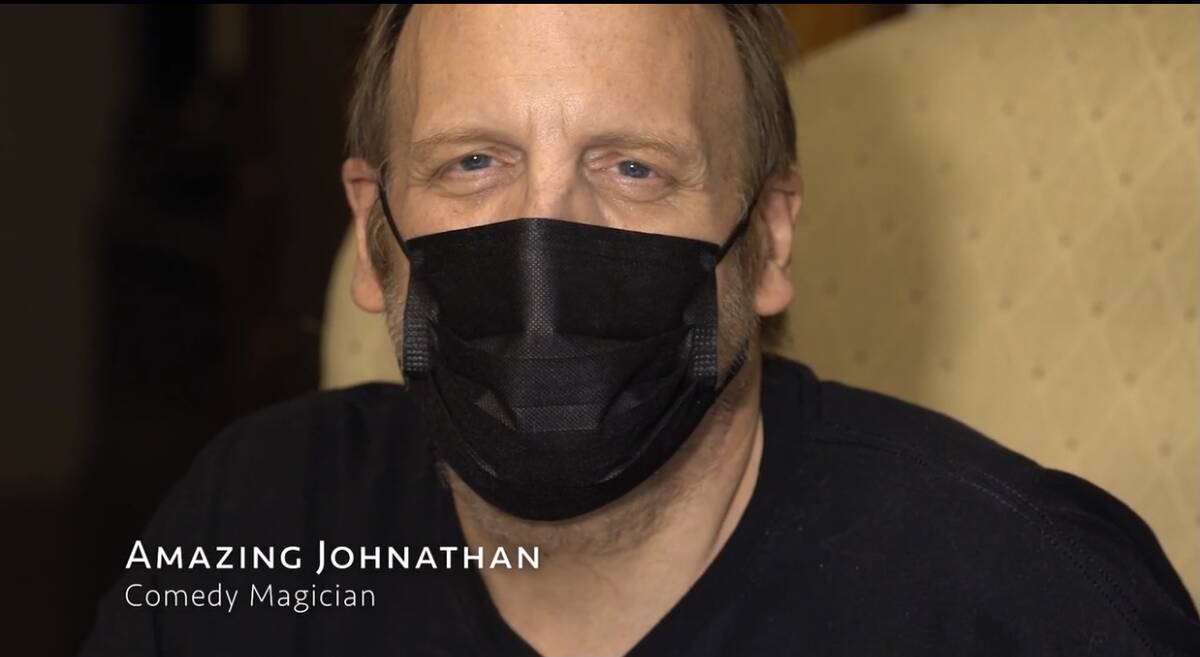 The Amazing Johnathan is shown in the developing documentary "The Night the Lights Went Out in Vegas." (PenRich Productions) 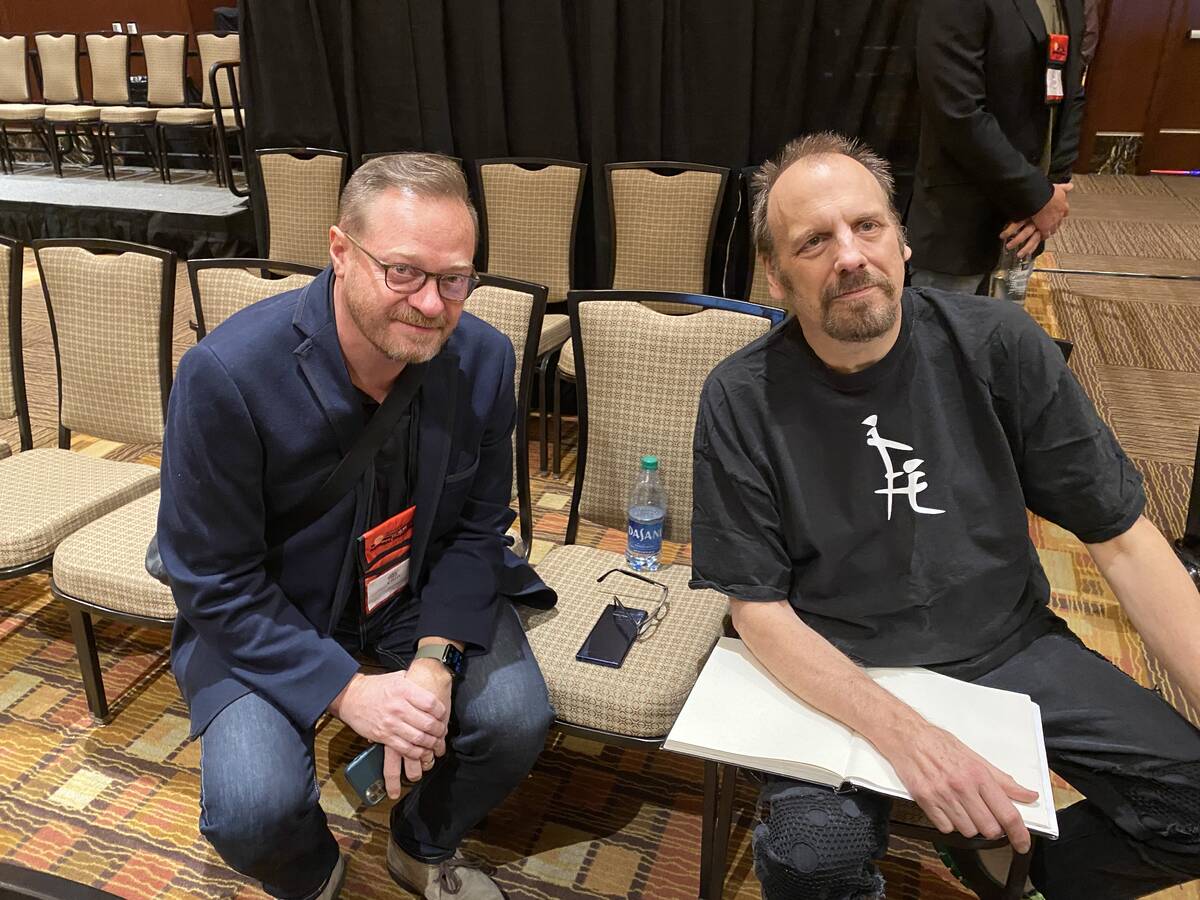 Chris Kenner and The Amazing Johnathan are shown at the honorary roast of King during the Society of American Magicians Convention at Golden Nugget's Grand Ballroom, Jan. 20, 2020. (John Katsilometes/Las Vegas Review-Journal) @JohnnyKats 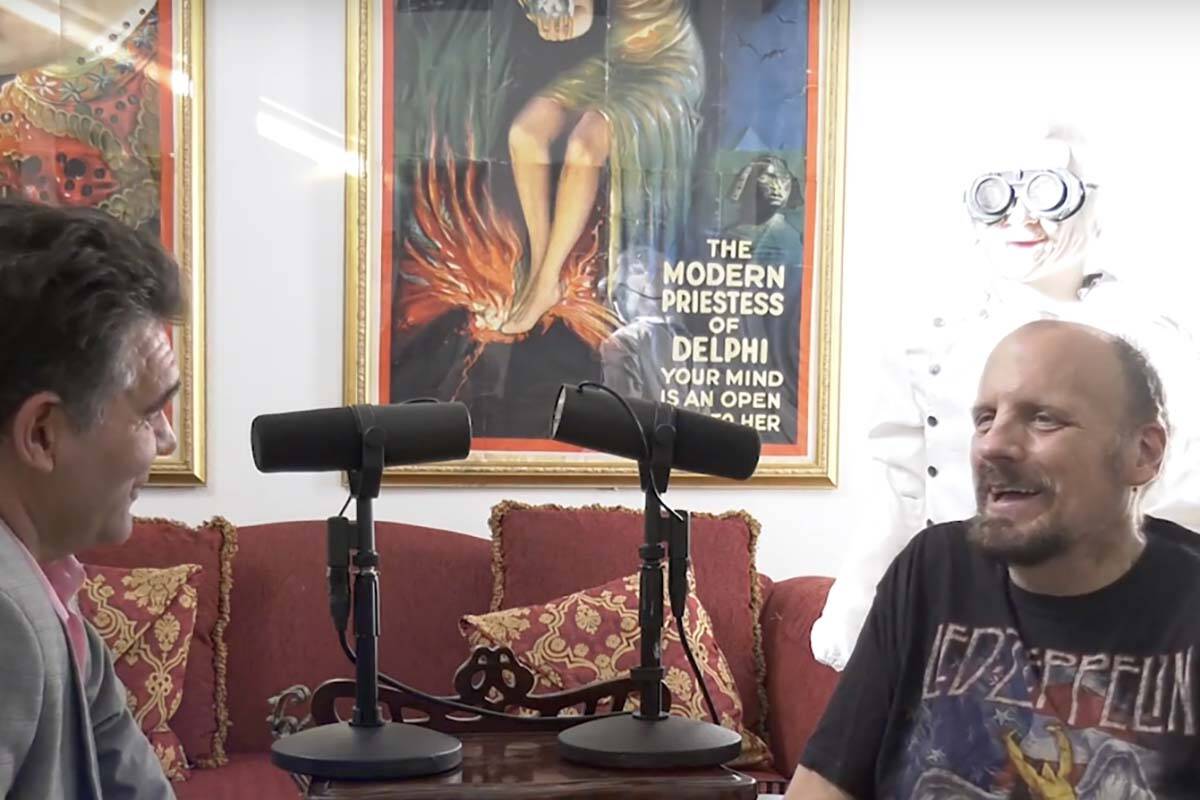 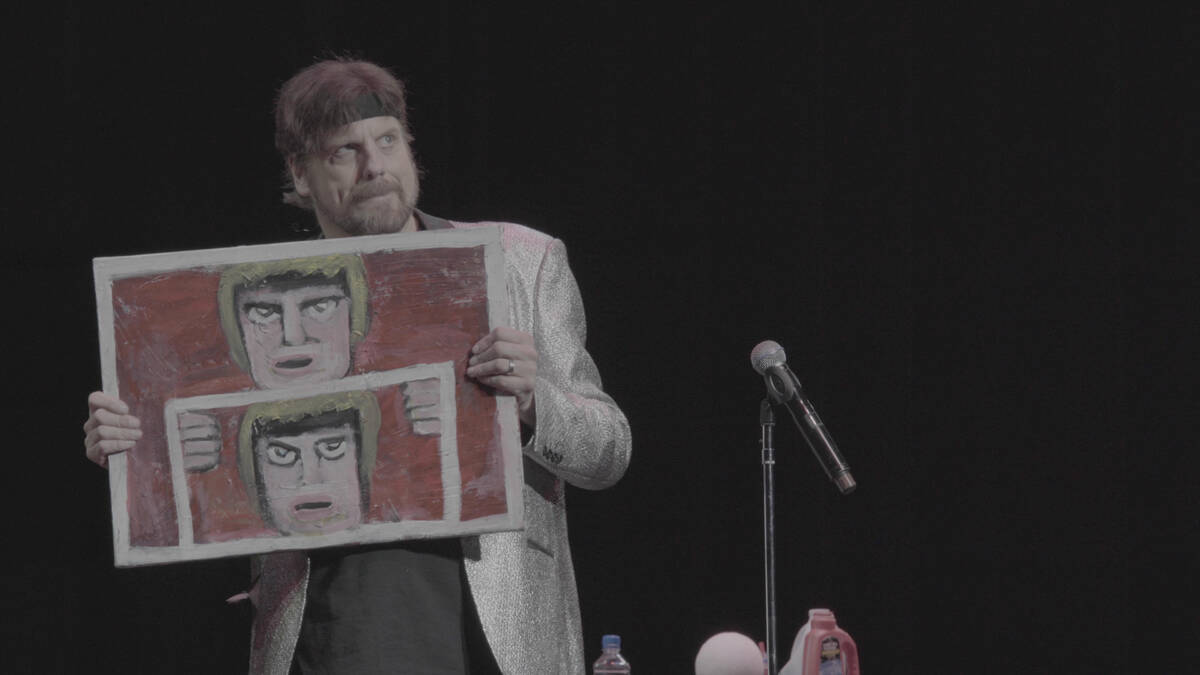 The Amazing Johnathan with his irreverent magic act, rose to popularity landing one of the longest residencies in Las Vegas. (Hulu) 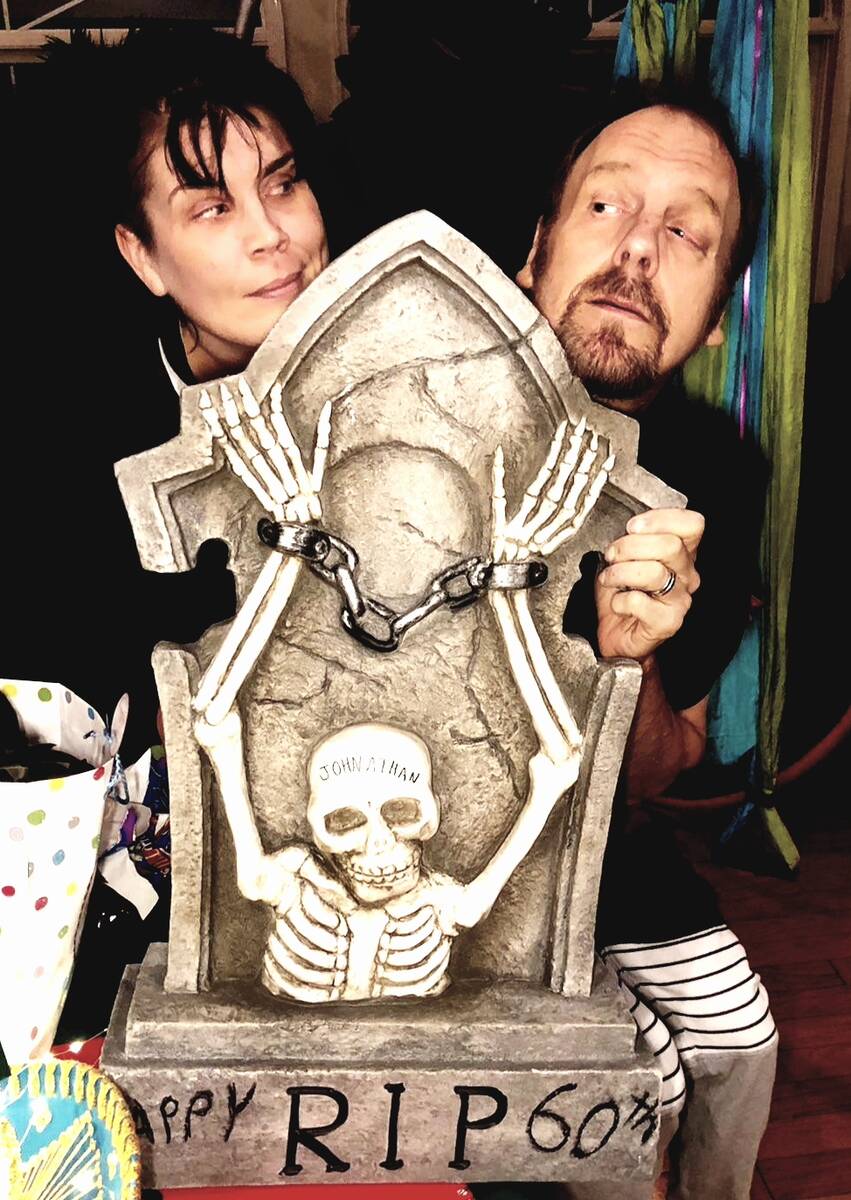 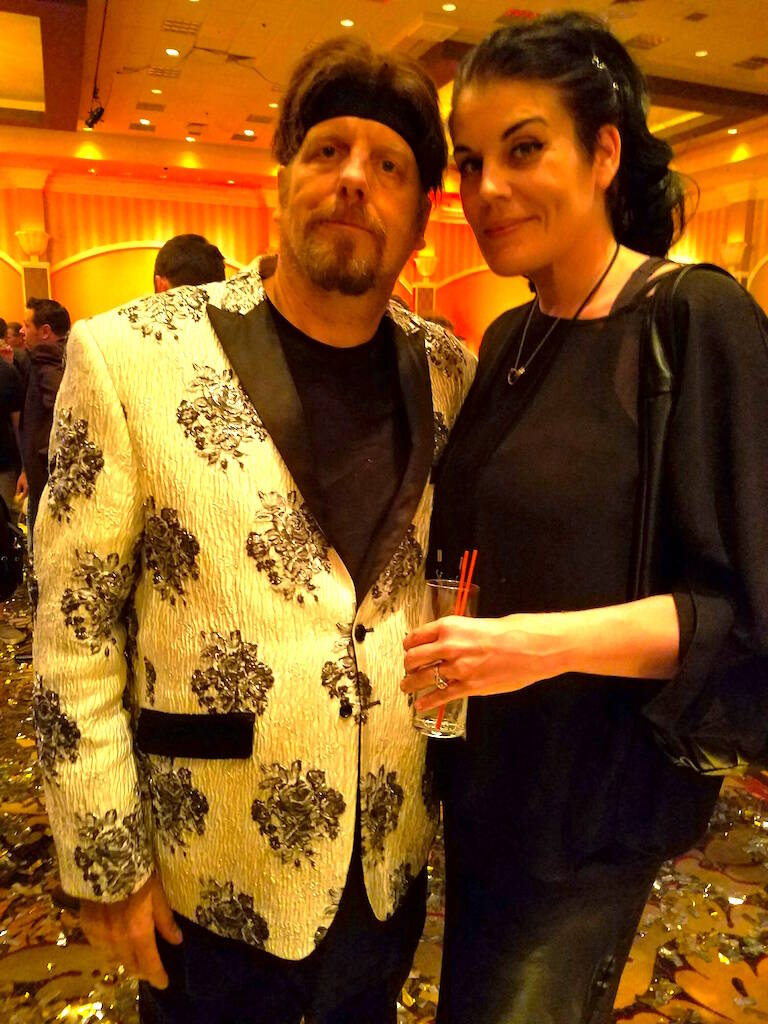 The Amazing Johnathan and Anastasia Synn at the Magic Live! convention, Aug. 17, 2016, at The Orleans. (TVT) 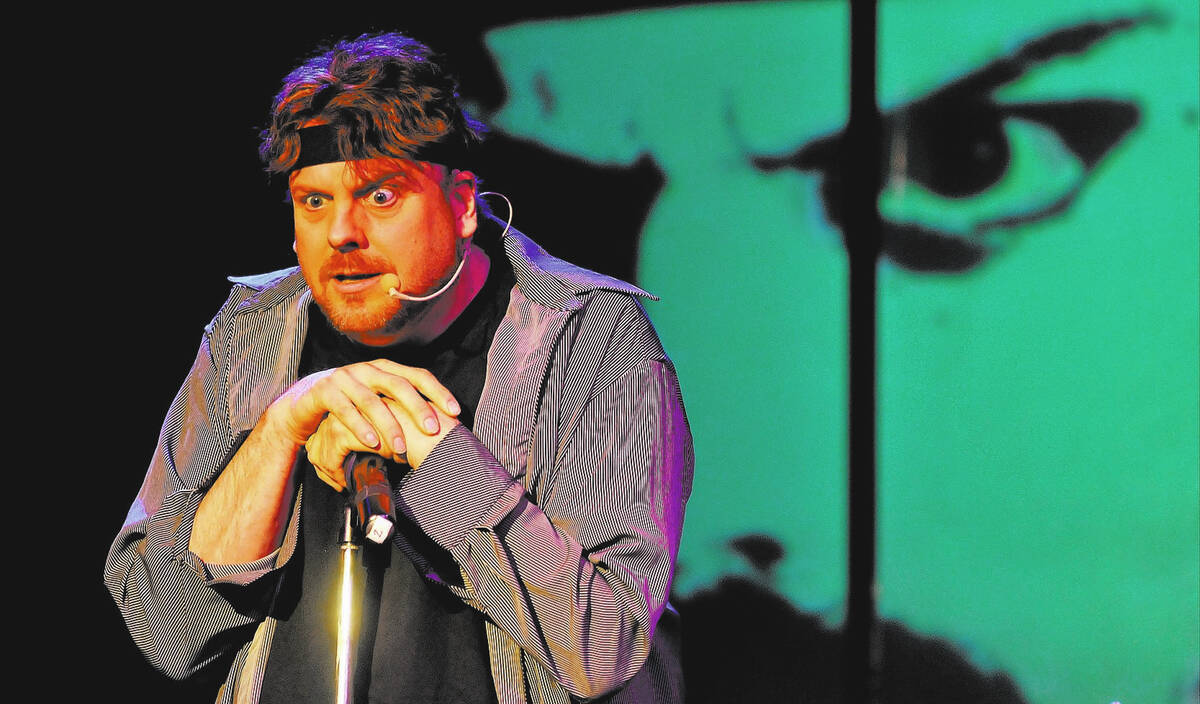 For years, The Amazing Johnathan pulled a fast one on death. But in the end, even he could not escape its reality.

The longtime Strip headliner died at his home in Las Vegas late Tuesday night. He was 63.

Johnathan, whose legal name was Johnathan Szeles, passed away about 11:30 p.m. Tuesday. Johnathan’s wife, the sideshow stunt artist Anastasia Synn, confirmed her husband’s passing about a half-hour after his death.

“The last thing I said to him was, ‘I love you, honey, I’ll be with you when you get up from your nap,’ ” Synn said near midnight Tuesday night. “We were feeding him oranges and strawberries. He was so peaceful. He said, ‘Yay!’ He had the most pure and sweetest look on his face.”

Johnathan did not wake up from that nap.

“For the next 36 hours, he was unresponsive,” Synn said. “We spent that time snuggling with him.”

Synn and caregiver Stephanie Castellone of the BurlyCares nonprofit medical assistance organization, were with him at the end. Castellone is herself a performance artist, a contortionist, and was in A.J. and Synn’s wedding in June 2014.

Since 2009, Johnathan had suffered from cardiomyopathy, a degenerative disease that weakens the heart muscle. In November 2014, he told an audience at an ENTSpeaks event at Inspire Theater in downtown Las Vegas he had been given a year to live.

That night, Johnathan stunned the audience by saying, “The greatest time of my life was spent here. I made millions of dollars, I have two beautiful houses, and everything came crashing … down. And I was told I have a year to live.”

“So. Um … I promised myself I wasn’t going to cry, but, it’s very scary. My heart is failing. My wife says it failed long ago. But it is actually failing, for real.”

“I did my best to keep his medicine in his system, clean his foot wounds, do everything a nurse would do and I’m not a nurse. But I loved him so much,” Synn said. “He wanted to pass at home. For the past six months I was begging him to go the hospital, but he absolutely hated going there.”

Born in Detroit on Sept. 9, 1958, Johnathan developed an act peppered with drug references and gruesome/funny bits, such as pretending to swallow his own eyeball, skewering his tongue with an oversized nail and taking swigs of Windex.

A.J. began as a street magician in San Francisco. He appeared on several variety specials and talk shows in the mid-1980s through the 2000s, including “Late Night With David Letterman” and Fox’s “Comic Strip Live.” He was a national name on Comedy Central and hosted an hour-long special, “Wrong On Every Level.” He also wrote a tutorial on magic tricks and practical jokes, “Every Trick in the Book.”

A.J. arrived in Las Vegas in 2001 and was a top-selling headliner for several years at the Golden Nugget, where he enjoyed his greatest success. He moved on to the Sahara, Koval Theater at Miracle Mile Shops, Bally’s and Rocks Lounge at Red Rock Resort. His final appearance in public was Jan. 13, during a roast of ex-Las Vegas Mayor Oscar Goodman at Oscar’s Steakhouse at the Plaza.

Johnathan’s acerbic wit came out that night. Chris Phillips of Zowie Bowie was among the roasters, and commented to Johnathan, seated across the table, “I am so nervous. I know nothing about being a stand-up comedian.”

A.J., peering into his notebook and brushing up his jokes, didn’t avert his gaze. He just answered, “You better learn fast.”

Prior to that appearance, Johnathan performed with Synn at the Wonderground magic showcase at The Olive Restaurant in October 2016. In January 2016, he reunited for a final time with Penny Wiggins, who played the daffy Psychic Tanya for more than 15 years, to host a midnight variety performance at Baobab Stage at Town Square.

At the top of the show, Wiggins greeted A.J. with a line he’d actually written, “Weren’t you supposed to be dead two years ago?”

Wiggins, a fabulous comic actress, cried late Tuesday when remembering her stage partner, saying, “He was the nicest man and one of the funniest people I knew.”

Magic icon David Copperfield shared a message through Anastasia as Johnathan became unresponsive. The magician’s wife whispered Copperfield’s words, “Tell him how much I cherish his amazing talent, and thank him for the limitless laughter.”

Mac King, currently performing at Excalibur and currently the longest-running headliner on the Strip, posted, “So sad to lose my friend Johnathan, absolutely one of the funniest guys in the world. Thanksgiving will never be the same.” A.J. was a frequent guest at King’s holiday party.

Friends remember Johnathan’s penchant for pranks. The magician was an unbridled practical-joke artist.

Carrot Top, legal name of Scott Thompson, referred to a prank Johnathan pulled during a pool party at his Las Vegas home years ago. The magician asked Thompson if he wanted to see his new Hummer, referring to his then-new all-terrain vehicle. The two walked outside, all around Thompson’s neighborhood, finally to find a friend of Johnathan’s sitting on the curb, humming.

Penn Jillette of Penn & Teller, headliners for 21 years at the Rio, said Wednesday, “Vegas got a lot less crazy and for Vegas, that’s not a good thing.” Jillette also posted to Twitter, “Just a beautiful nut. He will be missed and our hearts are with @Siasynn (Anastasia’s Twitter handle). You know, it’s not like we didn’t have warning, but it’s still so sad.”

Planet Hollywood headliner Criss Angel, a friend of A.J.’s for decades, posted pics of the two together over the years. “He was a pioneer who paved the road for comedy magicians in so many ways, but more importantly – from day 1 (in the 90’s) when I was unknown – he showed me so much kindness and support. We became friends immediately and remained brothers until the end.”

“I remember when I was broke and he was headlining his own Vegas show, he would take me out to eat hibachi and pick up the tab – he made me feel like someone … There will NEVER be another … May you rest in peace… and don’t play too many pranks up there.”

A.J. was the focus of two documentaries in recent years: Ben Berman’s “The Amazing Johnathan Documentary,” which premiered on Hulu, and “Always Amazing,” which went to YouTube.

A.J. attempted to coerce Berman into smoking methamphetamine, as the magician claimed it helped his general health.

Berman later asked Johnathan if he was playing a practical joke on the public with his grave health assessment.

Johnathan angrily said he had not. But in a later interview, explained he had sought to dupe the public in a different manner.

‘This is the deal: I wanted to fake my death. I met with my management and a team of lawyers, back when I lived in L.A.,” said Johnathan, who arrived in Las Vegas in February 2001 to headline at the Golden Nugget. “Nobody has ever done that and come back, and I wanted to be the first one to do it. I wanted to disappear for five years, minimum, and then come back and show the whole process of what I had to do, as a documentary, what I had to do and how I had to deal with my bank accounts. Who did I tell, who didn’t I trust.”

“They told me I’d be watching it in jail if they showed it,” A.J. said. “There were so many illegal ramifications. Even the people associated with it would have gone to jail for things like tax evasion. People would sue for all kinds of reasons.”

Johnathan was also known as a serious vintage-car buff, owning more than 25 restored cars at the peak of his collection. His garages were filled with such classics as a 1932 Pierce Arrow, 1967 Pontiac GTO and a 1972 Dodge Challenger. He had sold off several vehicles over the years, donating a portion of the profits to charity.

Johnathan is survived by his sisters, Nancy Rogers and Gail McGuire. A.J. had been saddened over the recent deaths of his mother, Doreen Szeles, and his cat, Dodger.

As for plans for his memorial, Synn said she was hoping to secure a major Las Vegas theater for a public celebration of life. Plans should be in order within three weeks. In lieu of flowers, donations to BurlyCares are encouraged.

“He was so loved. I want him to have the biggest celebration, with everyone who loved him tell the stories of the pranks he played on people,” Synn said. “There was nobody else like him.”