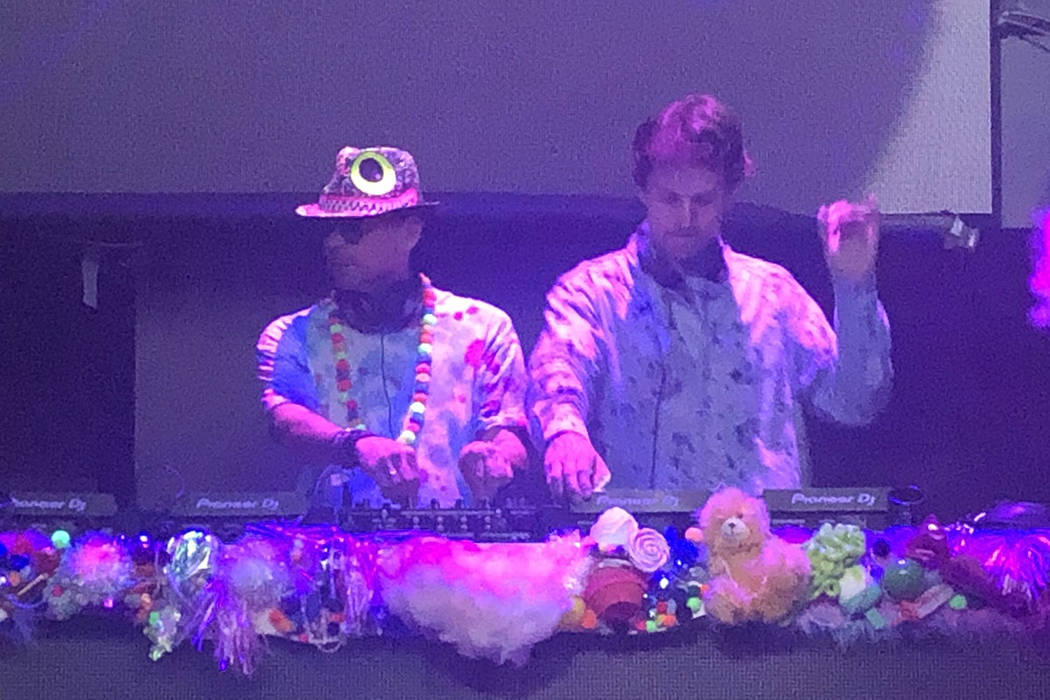 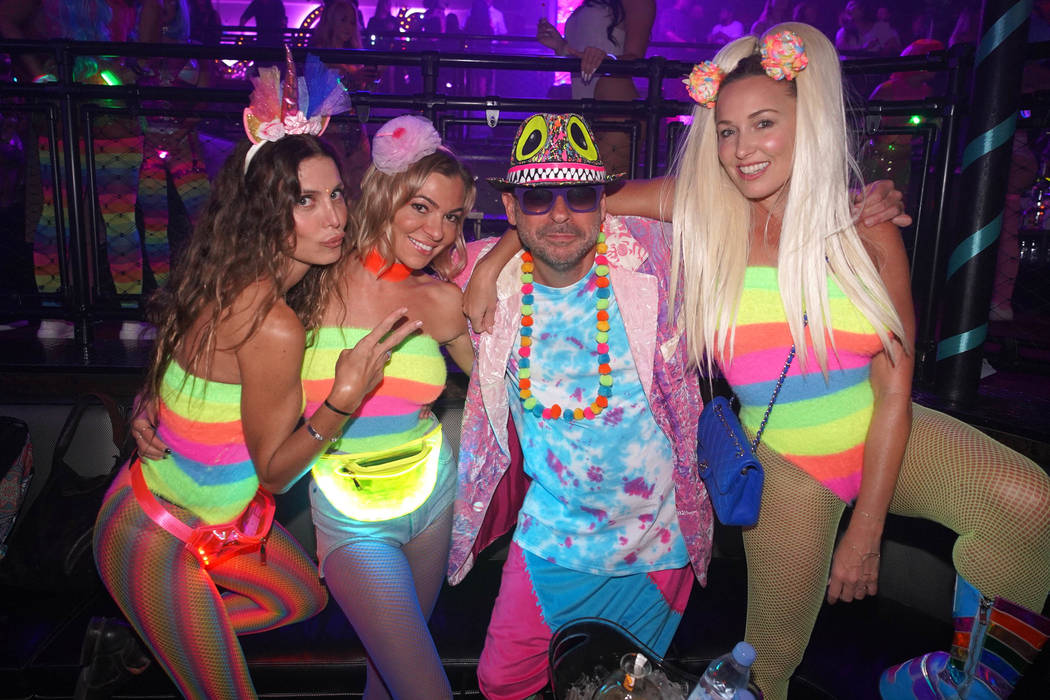 Guy Laliberte and guests are shown at "Candy World" at Light Nightclub at Mandalay Bay on Saturday, Aug. 24, 2019. (Michael Simon/startraksphoto.com) 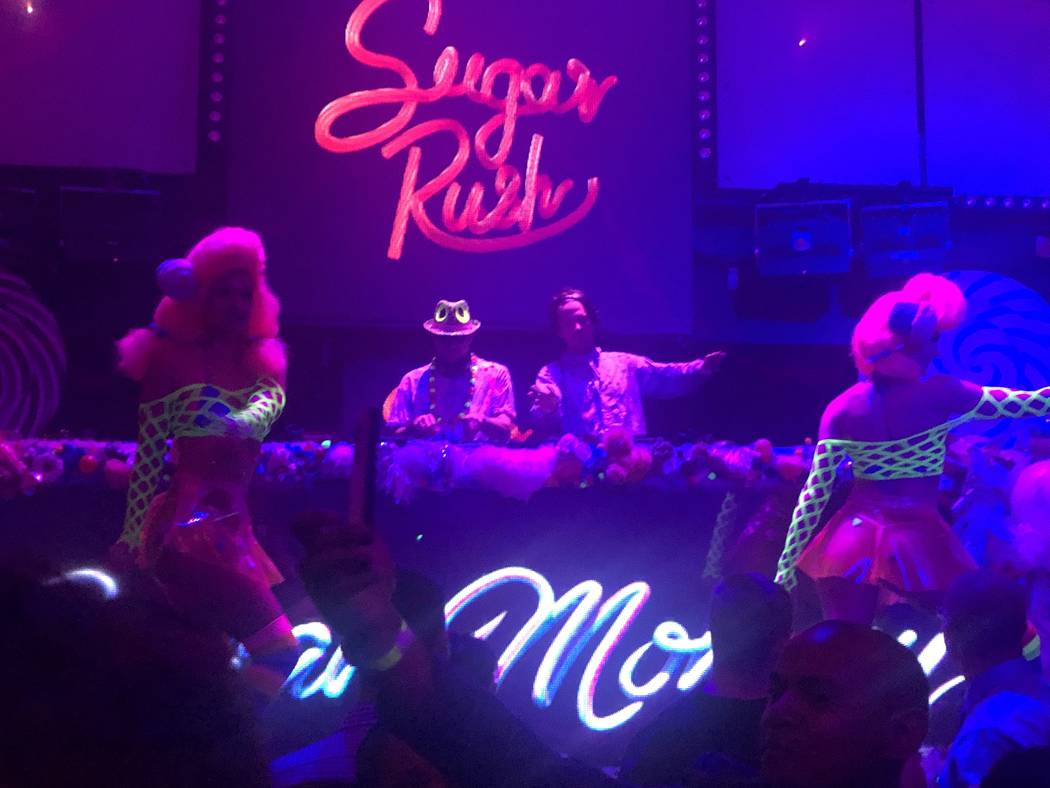 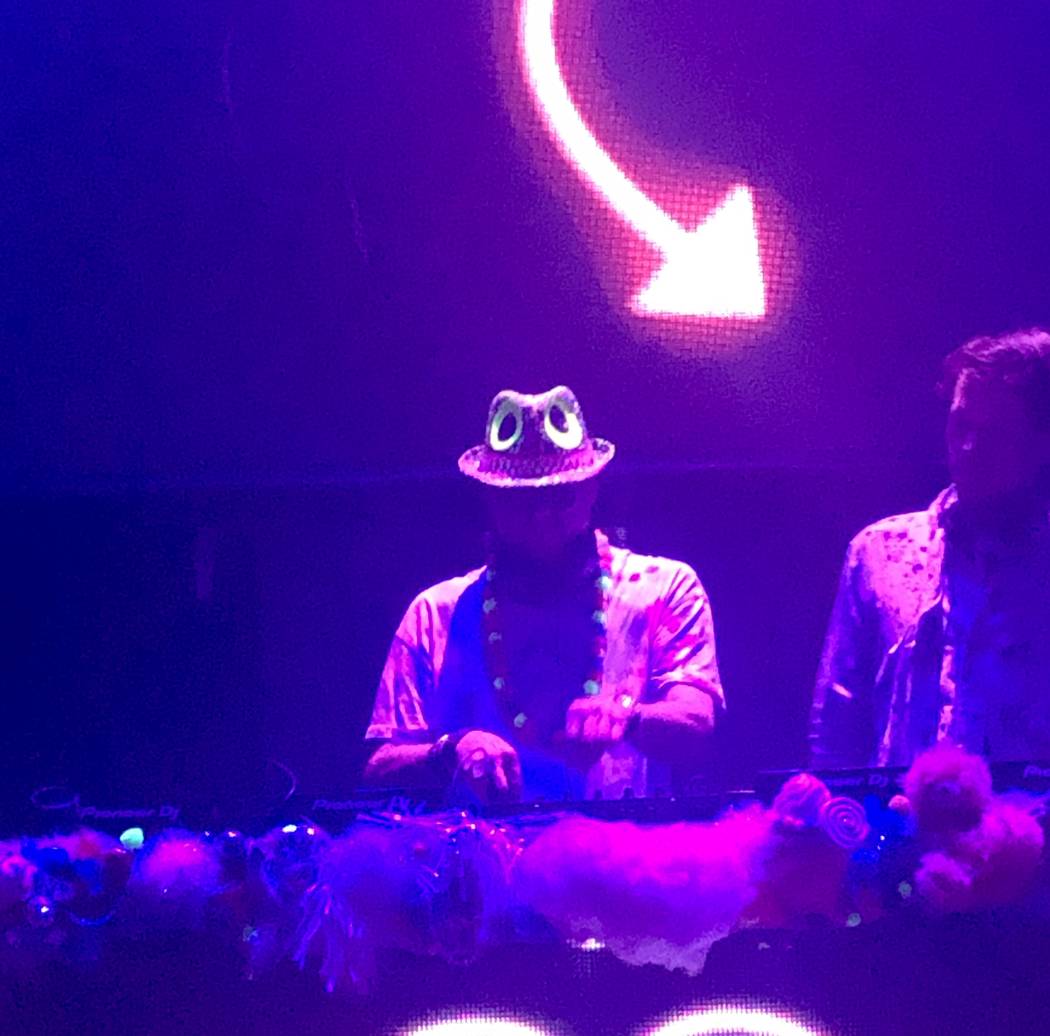 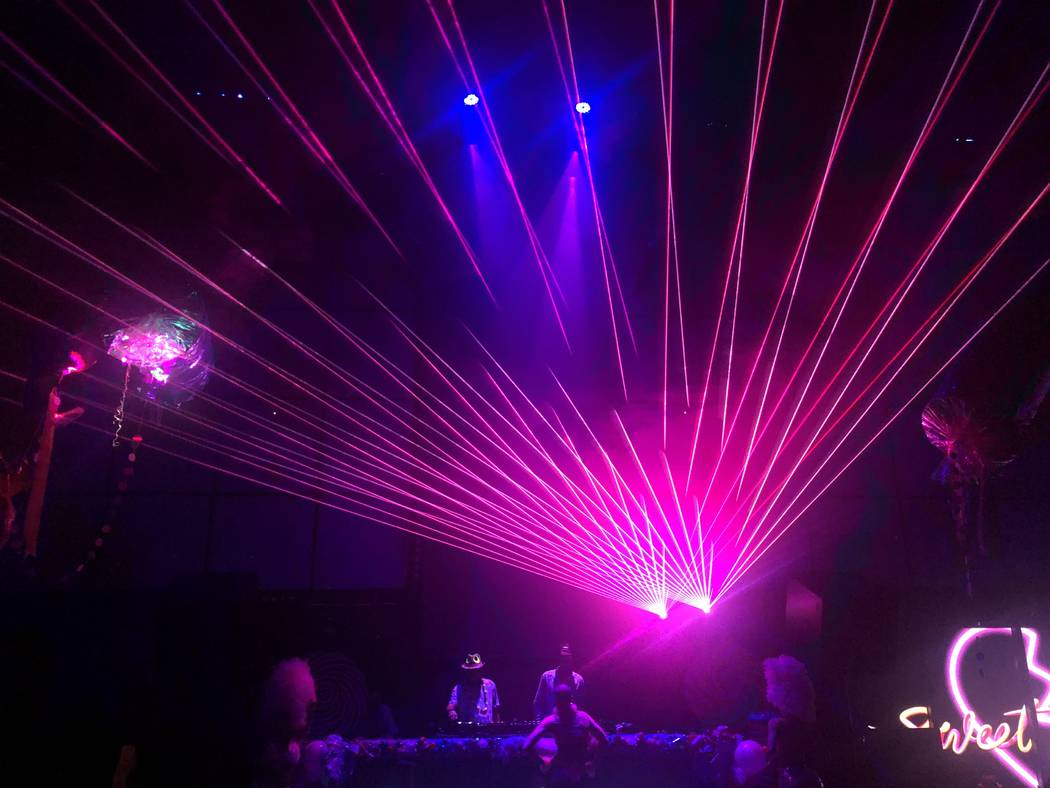 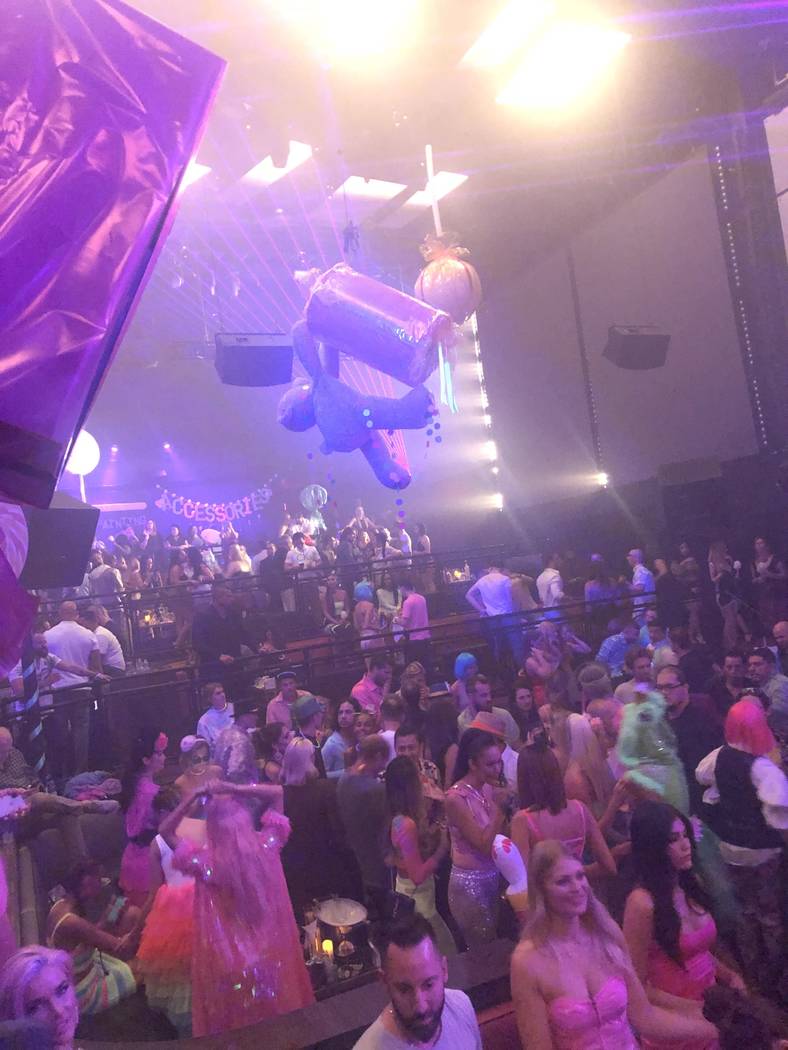 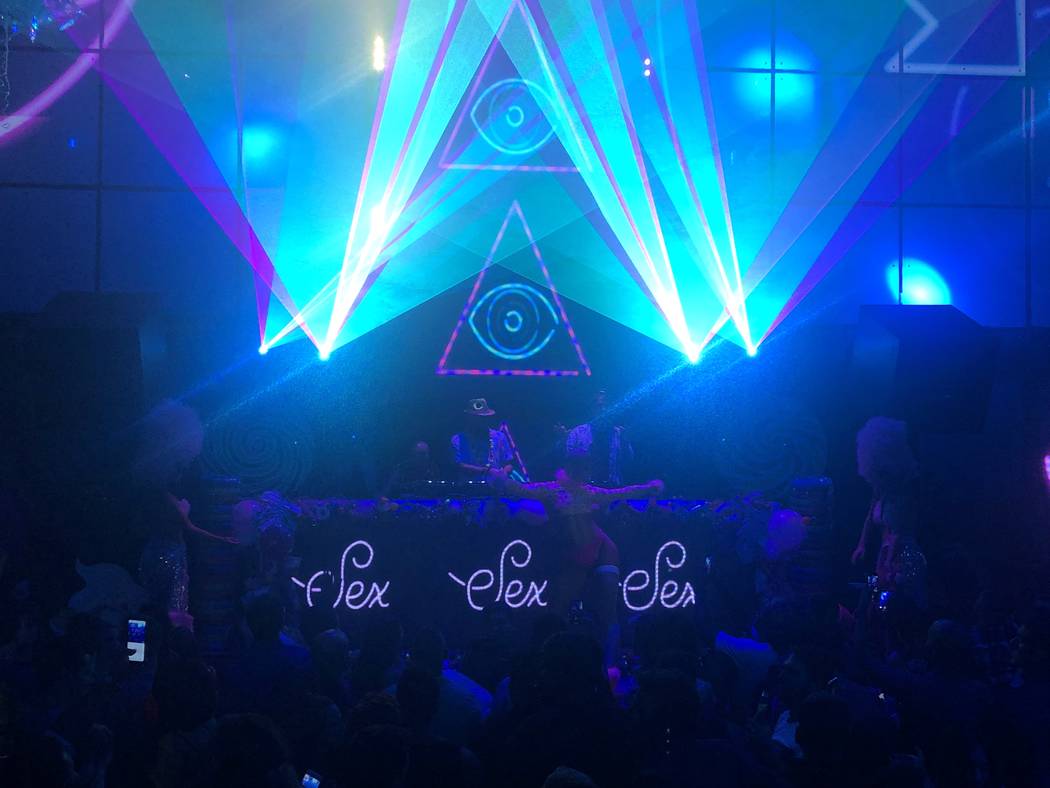 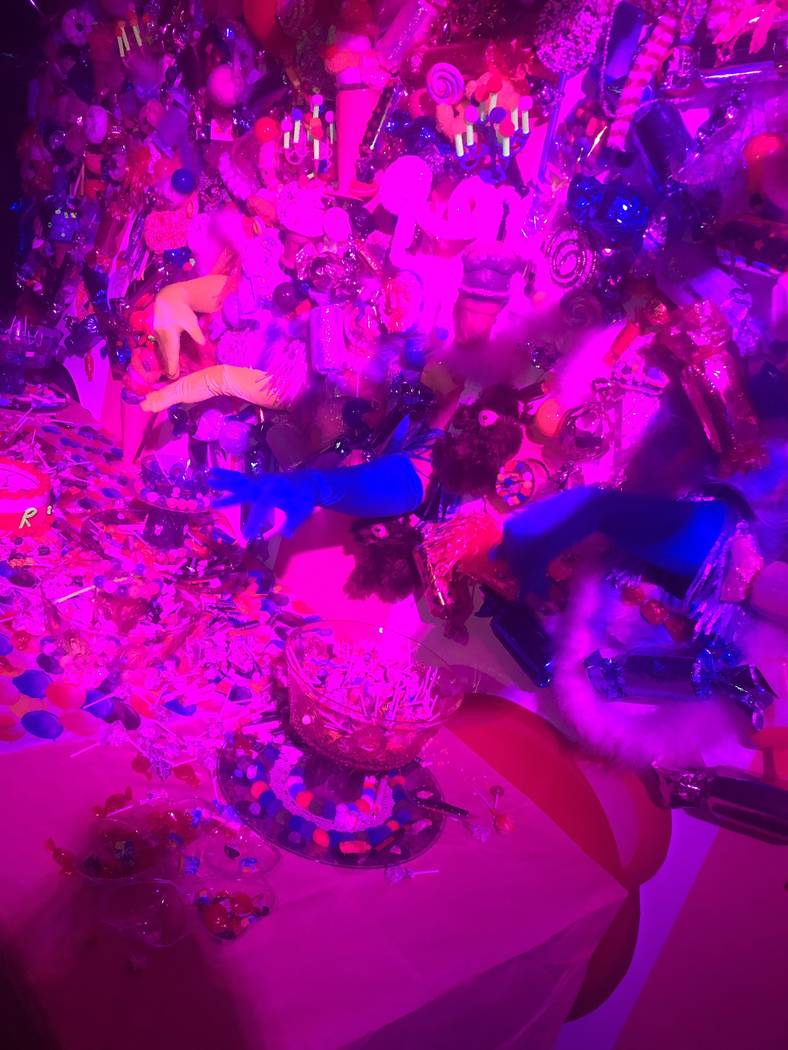 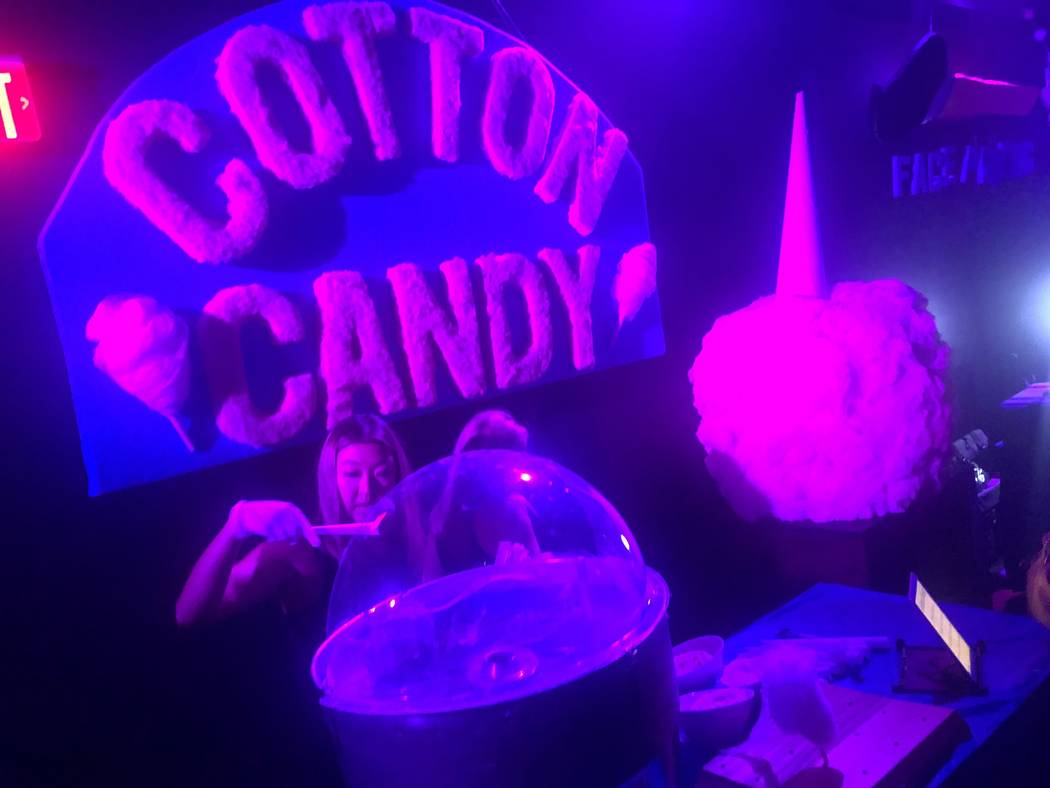 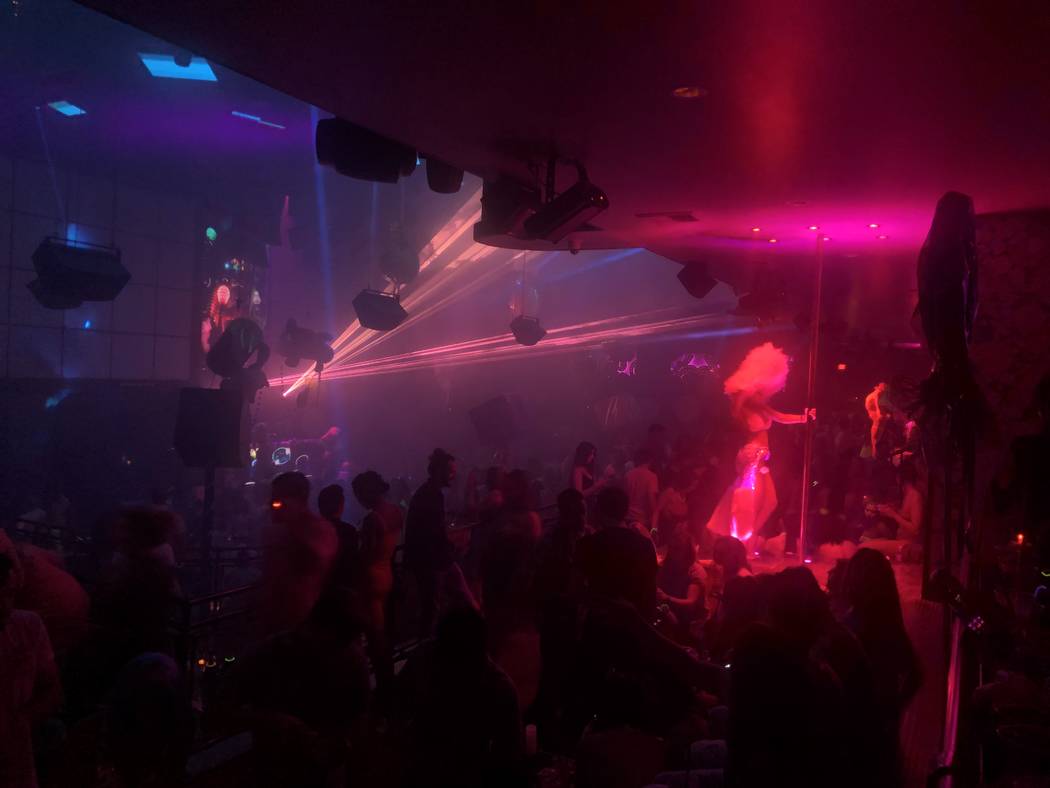 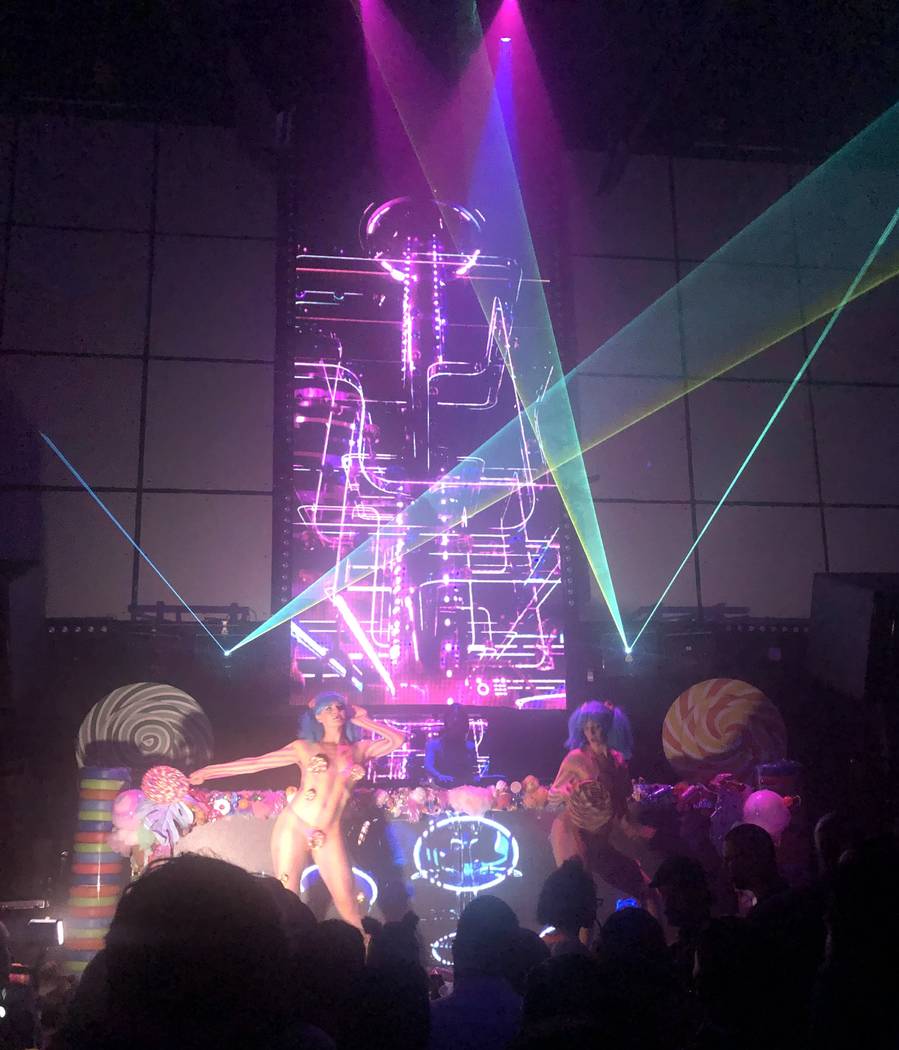 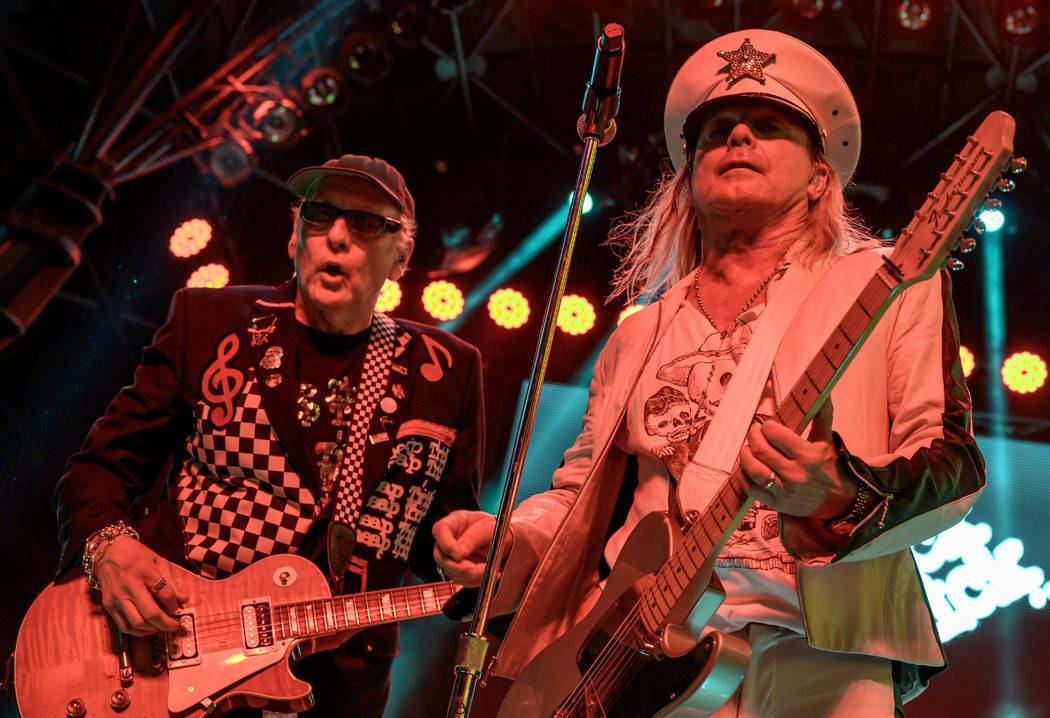 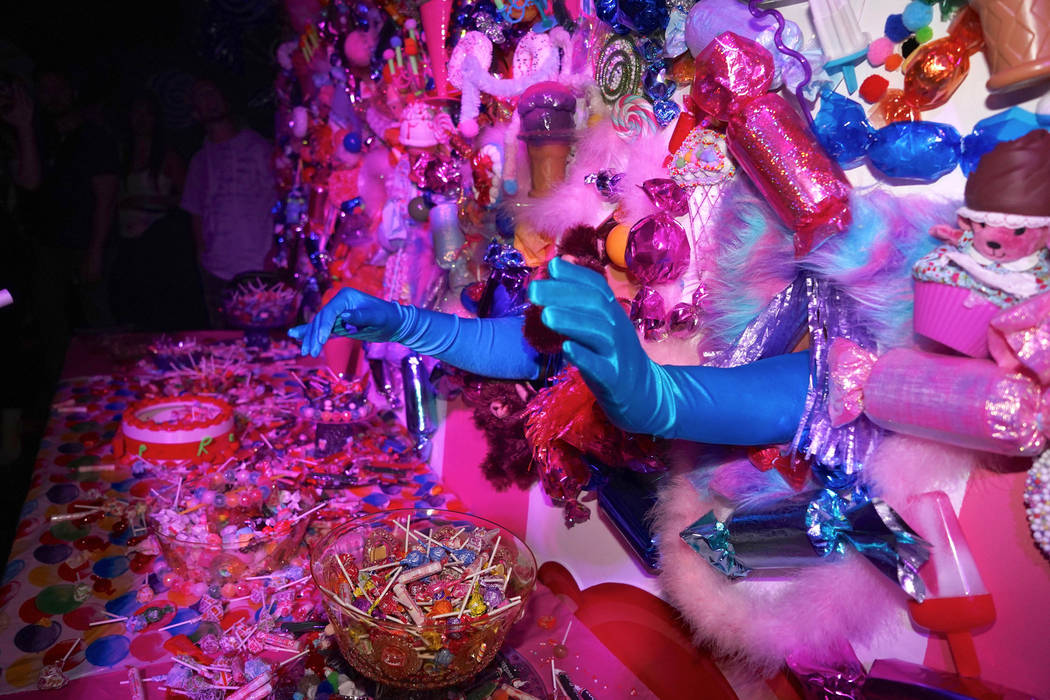 A scene from "Candy World" at Light Nightclub at Mandalay Bay on Saturday, Aug. 24, 2019. (Michael Simon/startraksphoto.com)

And there was candy, too, of the cotton variety and many other sugary delights. In one installment, rubber-gloved hands of two models protruded through a wall and directed guests to a table of Smartees, Starbursts and Dum Dum lollipops.

Laliberte himself kept a safe distance much of the night, manning the DJ booth alongside German EDM star Nico Stojan, grinning and bobbing his head while wearing a hat decorated with a pair of giant eyes. Headlining DJs Laurence Matte and Isaiah Martin also performed. Playboy Playmate of the Year Jordan Emanuel, and DJ star Morgan Page were also in the VIP crowd.

The point of it all? It was Laliberte’s 60th birthday, for starters. Members of such cirque shows as “Michael Jackson One” and “Love” took in the party. “Candy World,” likened to an acid trip while on a sugar rush, has been developed as part of Laliberte’s new PYI fortress in Montreal. This is a $30 million, 15,00-square-foot, 80-foot-tall pyramid that is home to multiple sets of atmospheric entertainment projects, “Candy World” among them.

Cotton candy, lollipops, candy canes and more! Join us TONIGHT as Light is transformed into Candy World for a night you won’t forget! Tickets available at thelightvegas.com🍬🍭🍫

Those who packed the club wore day-glo pastels, plastic sunglasses sold for $5 inside the club and fluorescent accessories necklaces and bracelets and such. Laliberte is now taking this show to Burning Man, and a future for “Candy World” on the Strip, specifically at Light, has been hinted.

Laliberte, who today is worth about $1.4 billion, helped launch Cirque’s ongoing festival on the Strip before selling the company to TPG Capital. I’d wager we’ll see a return of this circus, with the onetime street performer at the helm. As he told Forbes this month, “I gave myself an objective: I really was missing performing as an artist. When I started Cirque, I pretty much gave up performing. It’s really something that I wanted to live again.”

If it happens, dress accordingly.

The Matt Goss hang has been extended through to November at 1 Oak Nightclub. Gossy is headlining at 8 p.m. Sundays through Nov. 24.

The new listings thwart, for now, speculation that the Goss-master is moving hotels. Caesars Entertainment and Wynn/Encore have cropped up as his possible next venues.

“Pawn Stars” is closing in on legendary wild-west series “Gunsmoke” among the longest-running, prime-time series in American TV history. The History phenomenon, which debuted in July 2009, crosses 600 this season. “Gunsmoke” aired 635 original episodes in 20 seasons. “The Simpsons” tops this particular list with 662 episodes over 30 seasons.

Davis-Martin is a music fan, yes, but is also the new director of entertainment for Station Casinos. She took over Monday, replacing entertainment vet Monica Reeves, who spent 22 years with the company and has stepped down to take a similar position with Grand Sierra in Reno.

It’s a formidable responsibility, as Davis-Martin is running live-entertainment venues at nine off-Strip resorts. What will her imprint on the company be? Davis-Martin chuckled at the question.

“Give me another week for a really good answer,” she said. “Right now, we are assessing policies and reviewing what has and what has not worked.”

Perfect. Whatever leads to more emphasis on live entertainment, and less emphasis on bingo emporiums, we support.

Jackson Browne performed for about 2 hours, 15 minutes at Venetian Theater on Saturday night. That’s overtime for a casino performance (it’s typically about 90 minutes, so the crowd can get back to the casino). Browne expressed gratitude that hotel officials allowed him to go long. But who is going to pull the plug on Jackson Browne?

The Downtown Rocks free shows at 3rd Street Stage on the Fremont Street Experience. Saturday night, venerable rockers Cheap Trick drew about 15,000 to the latest show in the series, which has included similar barnburners as Buckcherry on Aug. 17 and continues with the Wallflowers this Saturday.