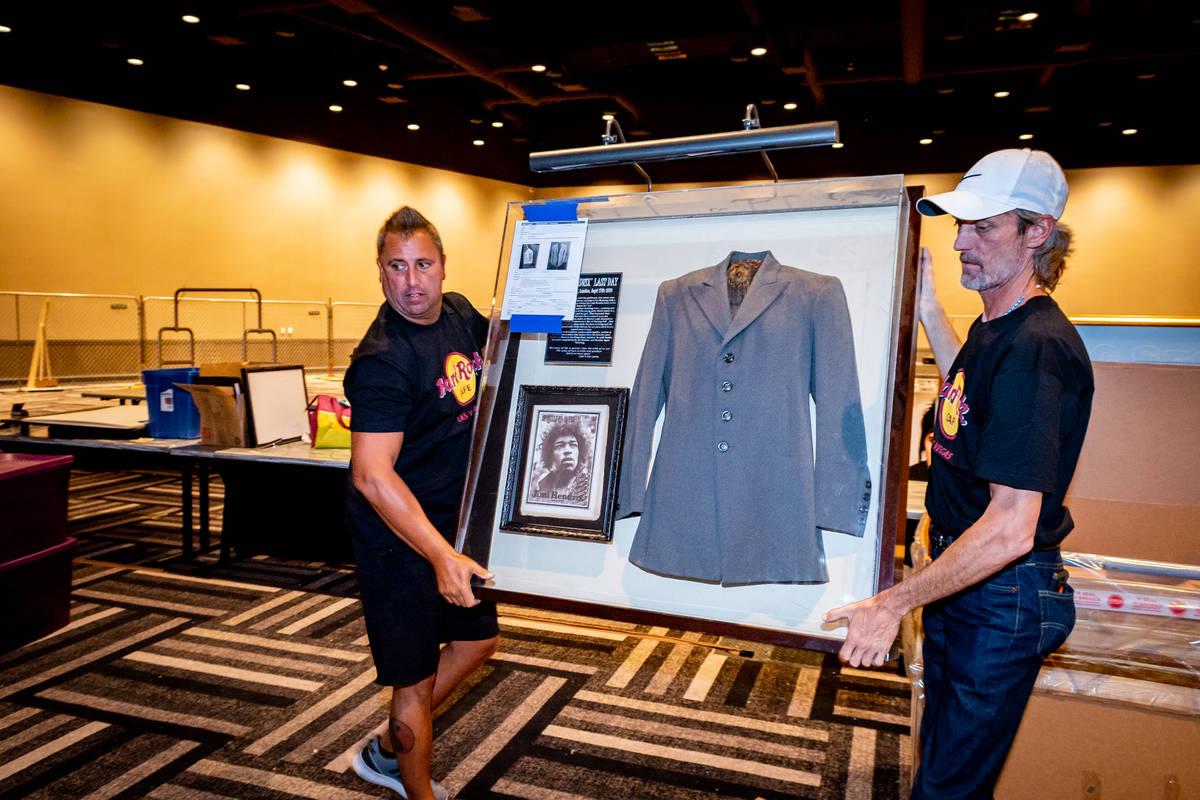 The jacket Jimi Hendrix wore on the last day of his life is among the items taken out of the Hard Rock Hotel in Las Vegas. (Hard Rock International) 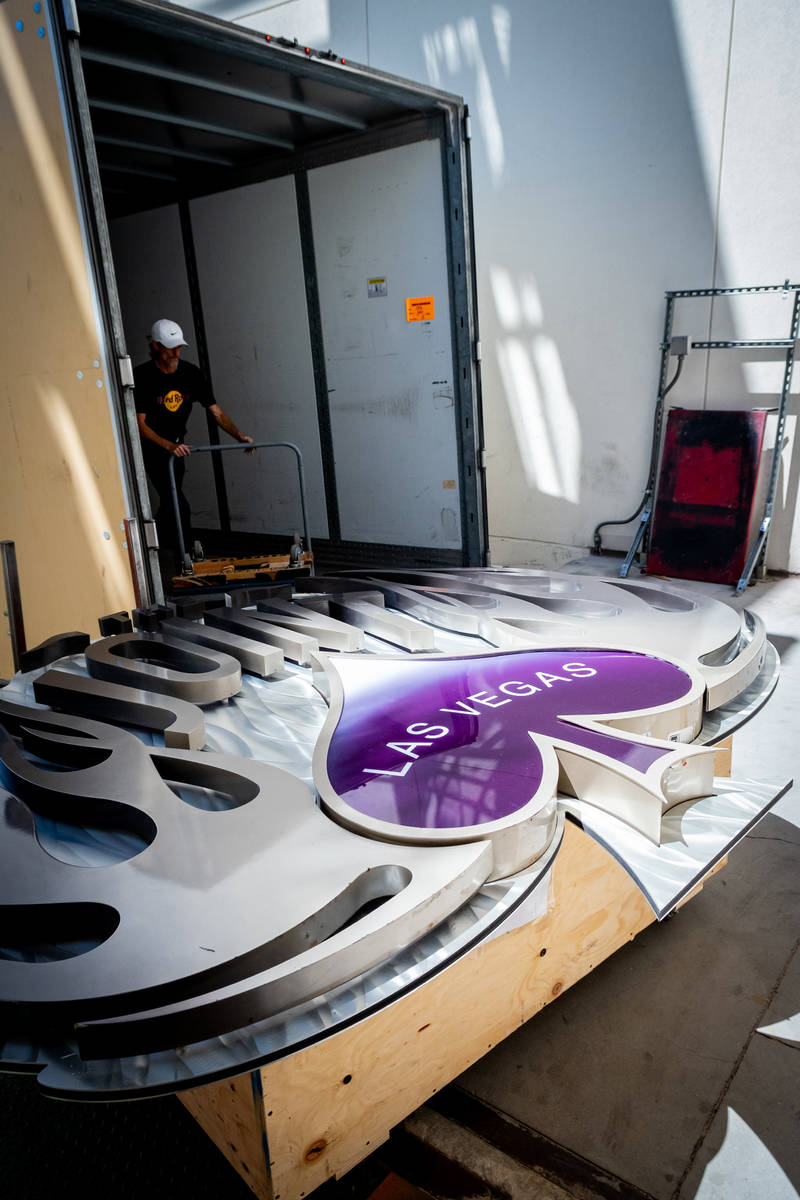 The sign at the entrance of The Joint is among the items taken out of the Hard Rock Hotel in Las Vegas. (Hard Rock International) 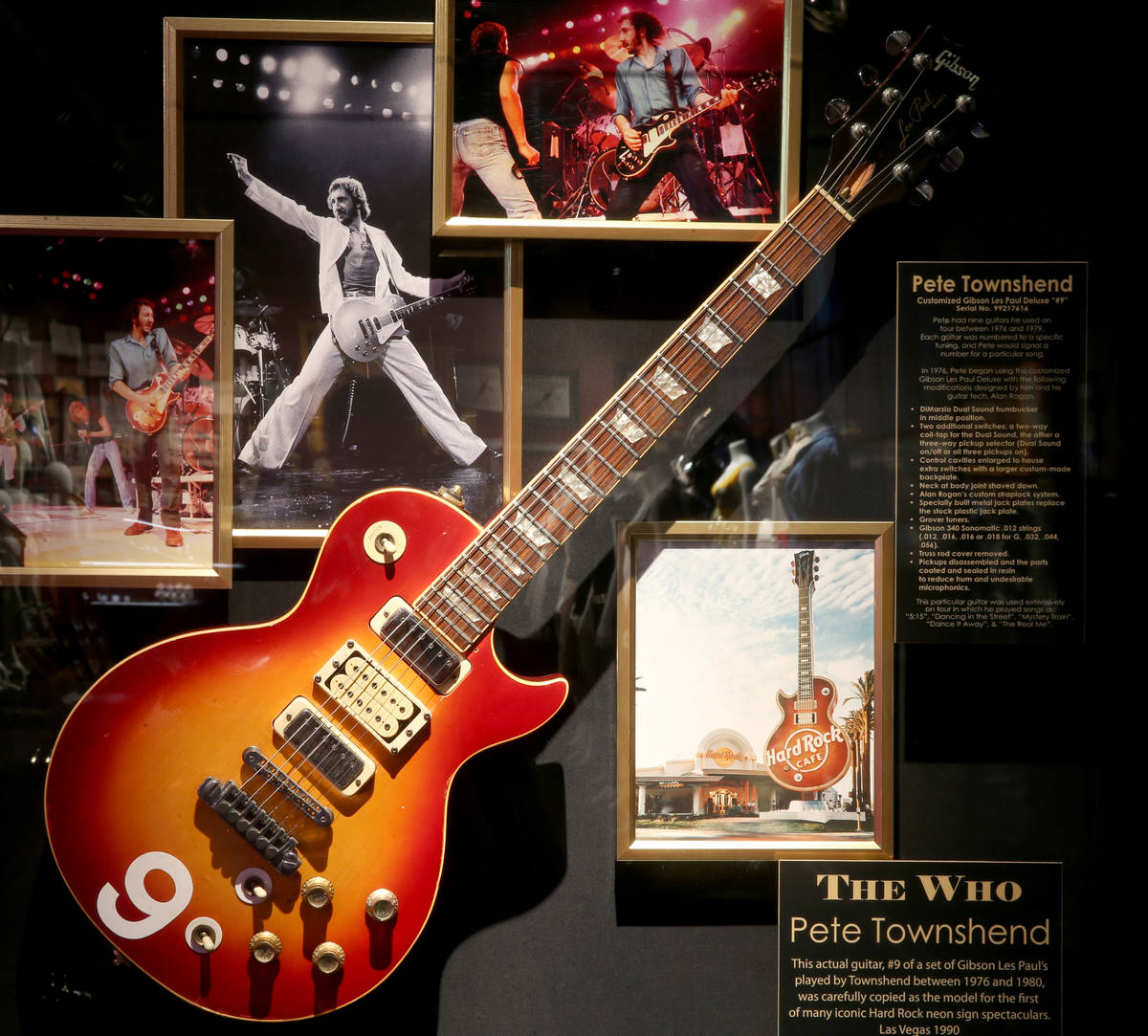 The Who's Pete Townshend's guitar used as the model for the Hard Rock neon sign at a new rock memorabilia exhibit at the Hard Rock Hotel in Las Vegas Monday, Oct. 7, 2019. The exhibit will run in the former John Varvatos store through Jan. 31. The hotel will shut down the first week of February, re-launching as Virgin Hotels Las Vegas in late 2020. (K.M. Cannon/Las Vegas Review-Journal) 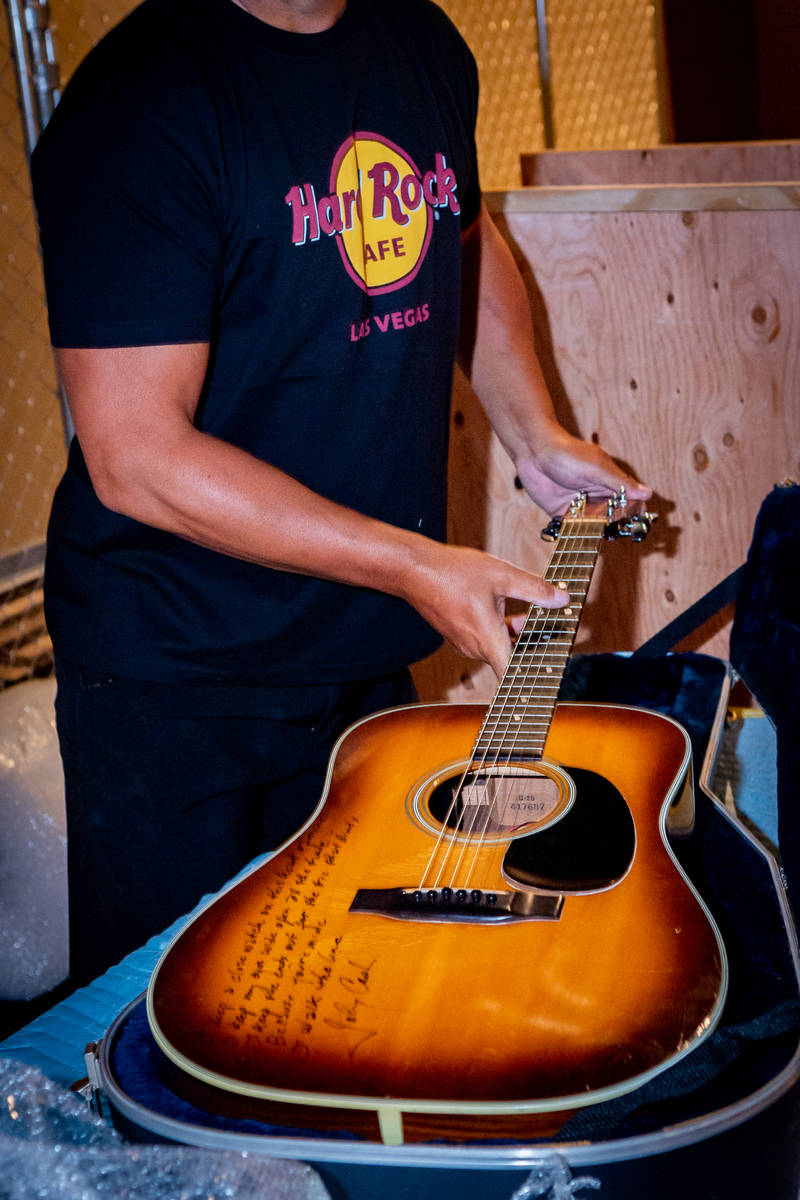 Johnny Cash’s autographed Martin guitar is one of the items taken out of the Hard Rock Hotel in Las Vegas. (Hard Rock International) 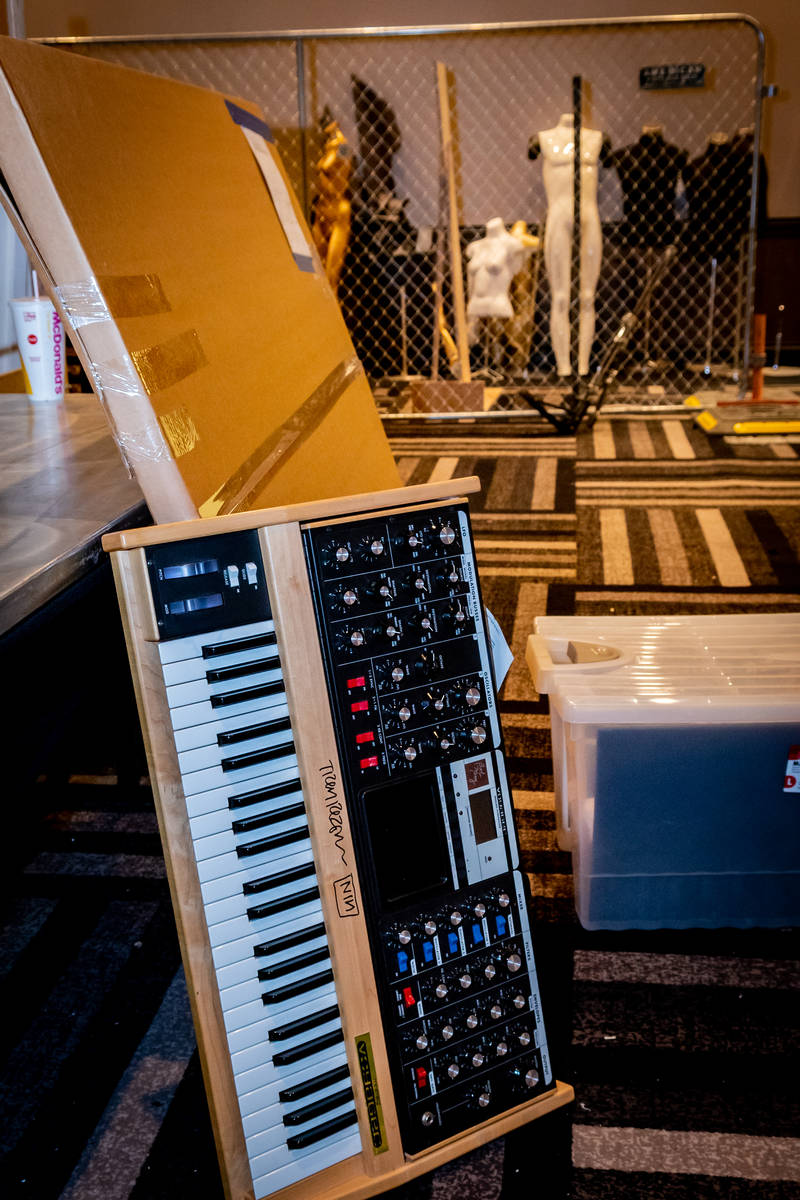 A synthesizer autographed by Trent Reznor of Nine Inch Nails is among the items taken out of the Hard Rock Hotel in Las Vegas. (Hard Rock International) 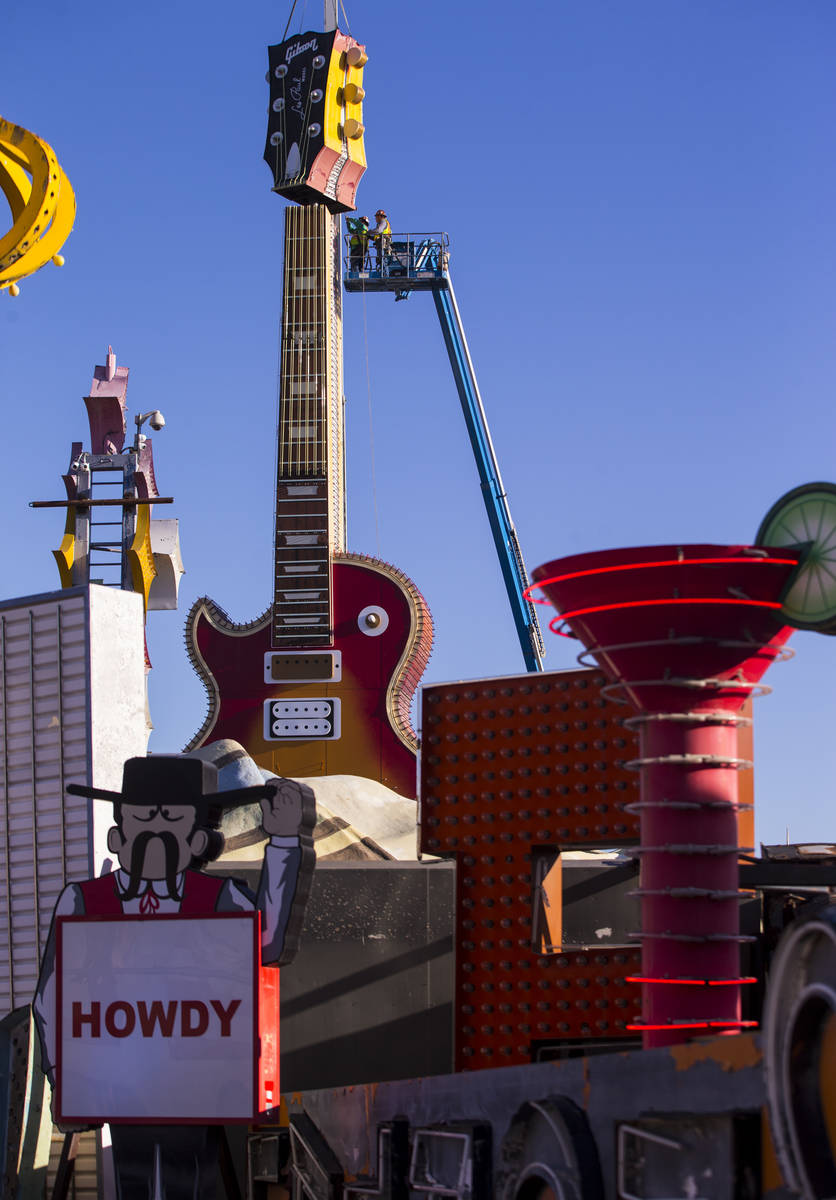 The headstock piece of the Hard Rock Cafe guitar sign is raised into the air as YESCO employees install the sign at the Neon Museum in Las Vegas on Friday, Feb. 1, 2019. (Chase Stevens/Las Vegas Review-Journal) @csstevensphoto 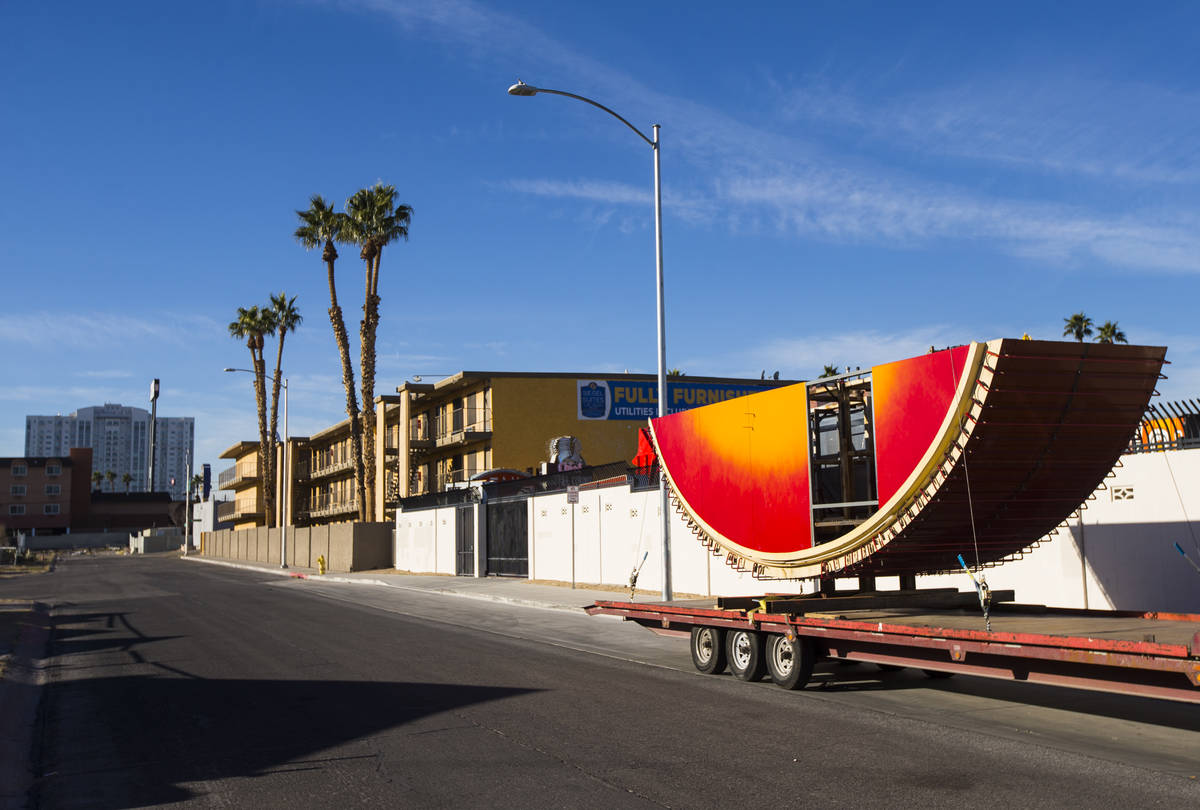 The first piece of the Hard Rock Cafe guitar sign sits outside of the Neon Museum before being installed by YESCO employees in Las Vegas on Monday, Jan. 28, 2019. Chase Stevens Las Vegas Review-Journal @csstevensphoto 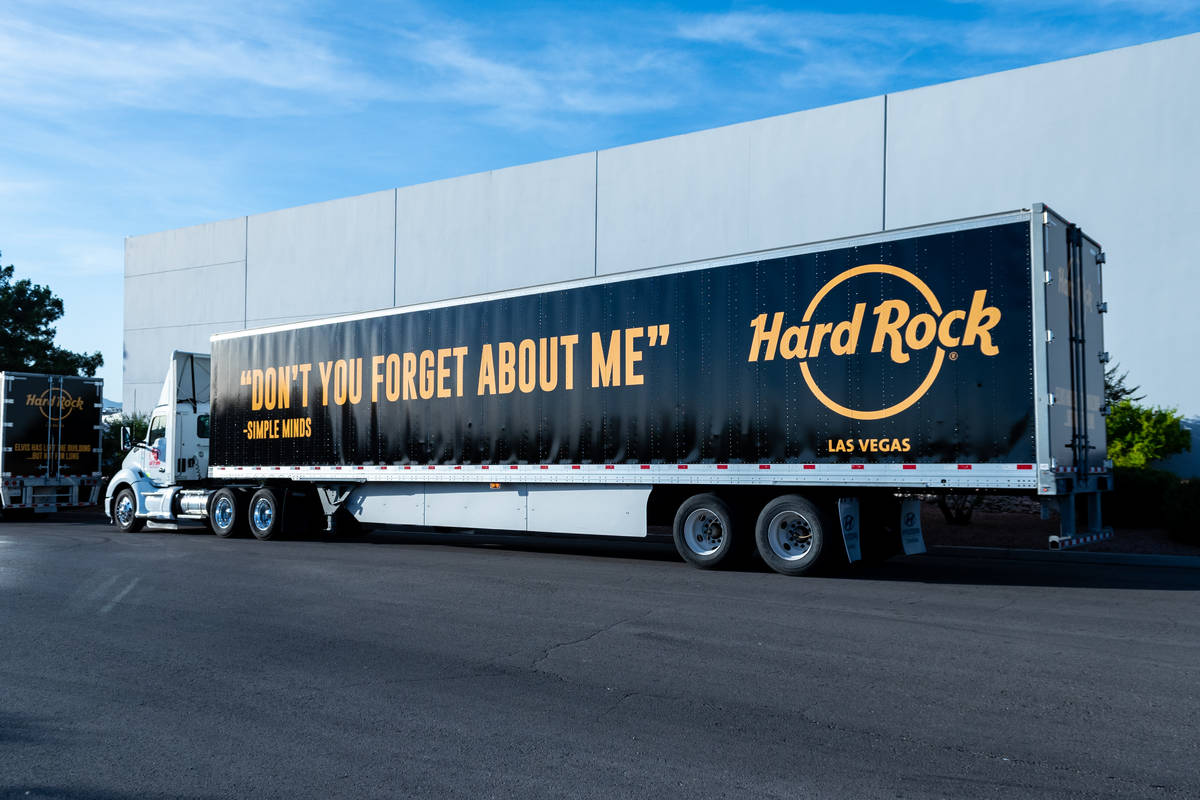 Many of the extensive displays covering the hotel’s walls, and decades of rock ’n’ roll history, have been hauled way on a pair of HRH-branded 18-wheelers. The process began about a week and a half ago.

The readily identifiable sign above the entrance of The Joint music hall is headed for storage, too.

Jim Allen, chairman of Hard Rock International and CEO of Seminole Gaming, said the items are being taken to an undisclosed location and will be returned to display on an undisclosed date. The company also owns Hard Rock Cafe Live on the Strip.

In a statement issued Tuesday, Allen hinted at the company’s return to Las Vegas resort operations: “While the doors to Hard Rock Hotel and Casino Las Vegas remain closed for now, we look forward to bringing the exciting Hard Rock atmosphere back to Las Vegas, which will always be one of the most iconic entertainment markets in the world.”

The Hard Rock Hotel closed in February and is undergoing a property-wide renovation as Virgin Hotels Las Vegas. The resort plans to reopen in November or December, depending on convention business.

Meantime, the Virgin Hotels ownership group, headed by Richard “Boz” Bosworth, is changing the image of the former Hard Rock Hotel property. The new owners have removed such high-profile images as the towering Gibson guitar sign at the Hard Rock Cafe, which is now on display at the Neon Museum, and the Fender guitar at the hotel’s porte-cochere.