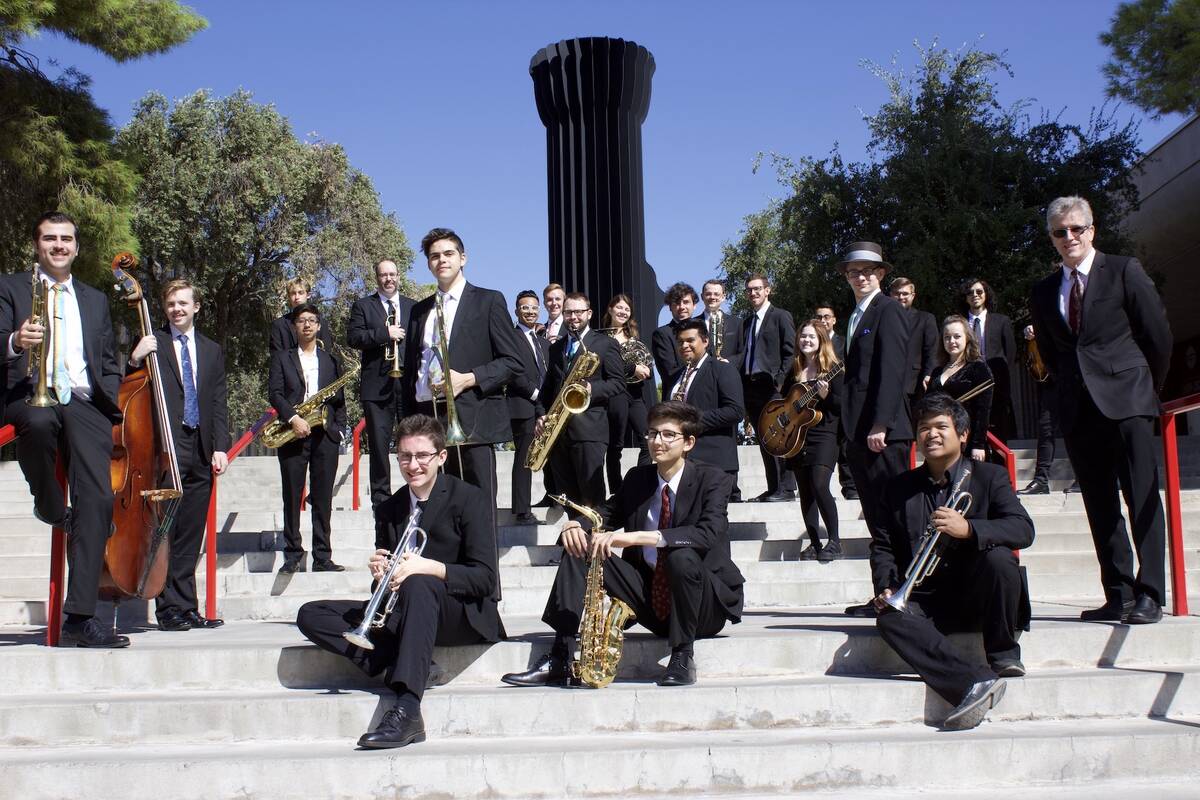 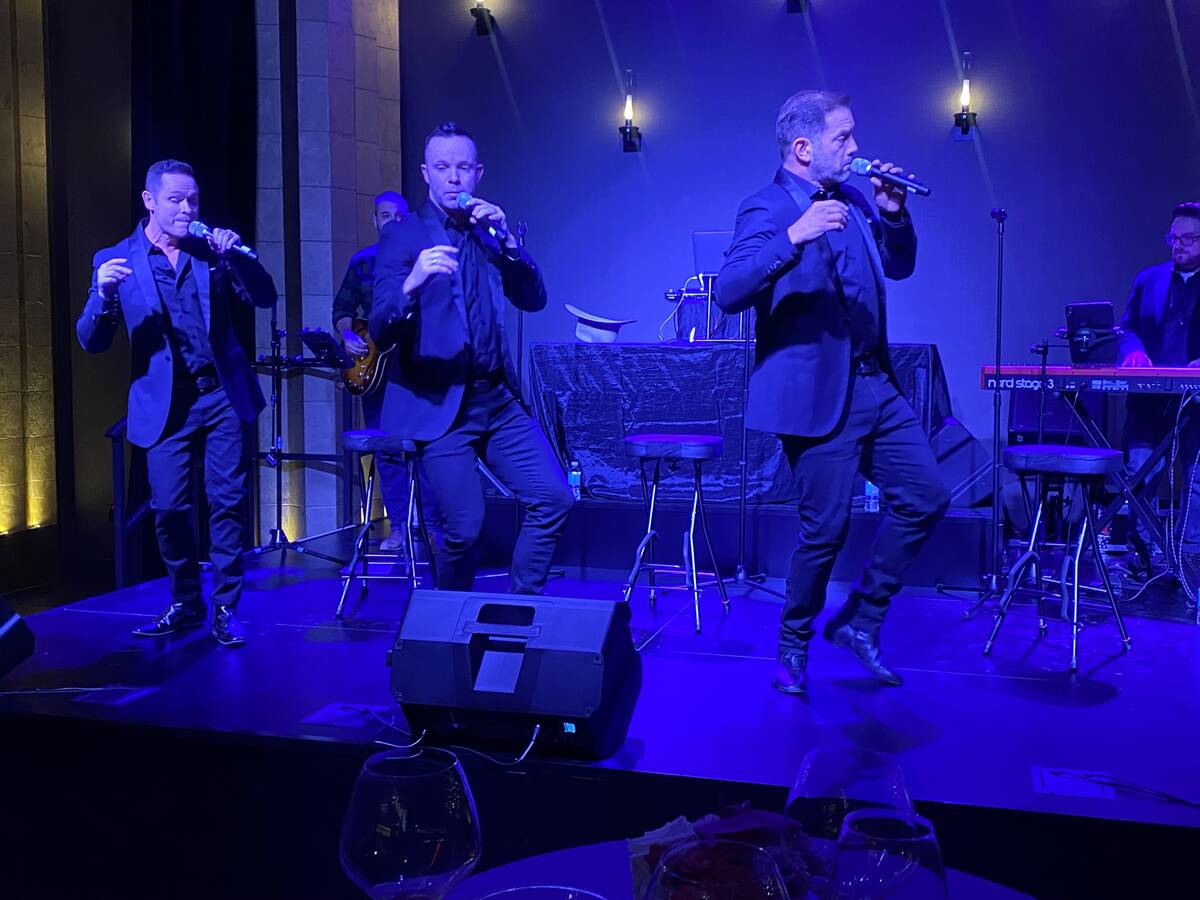 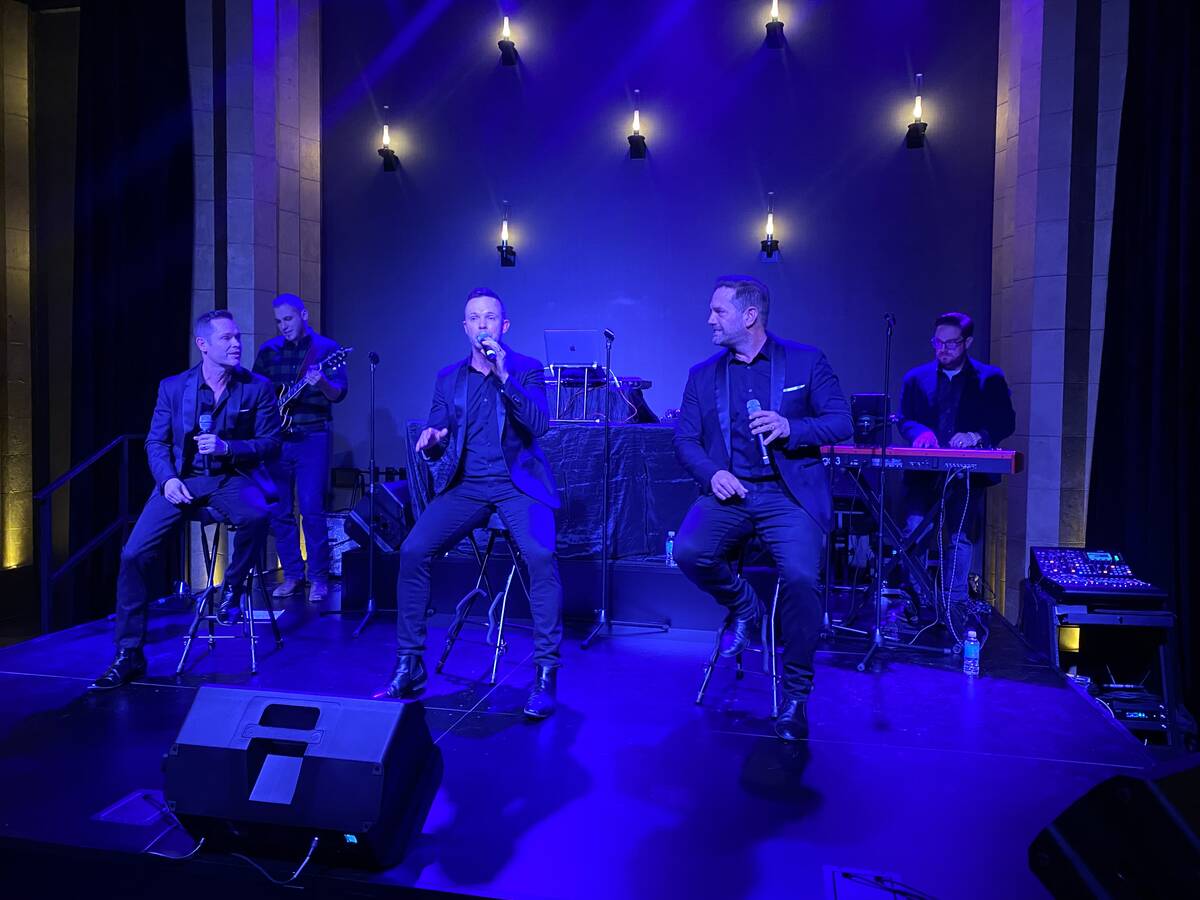 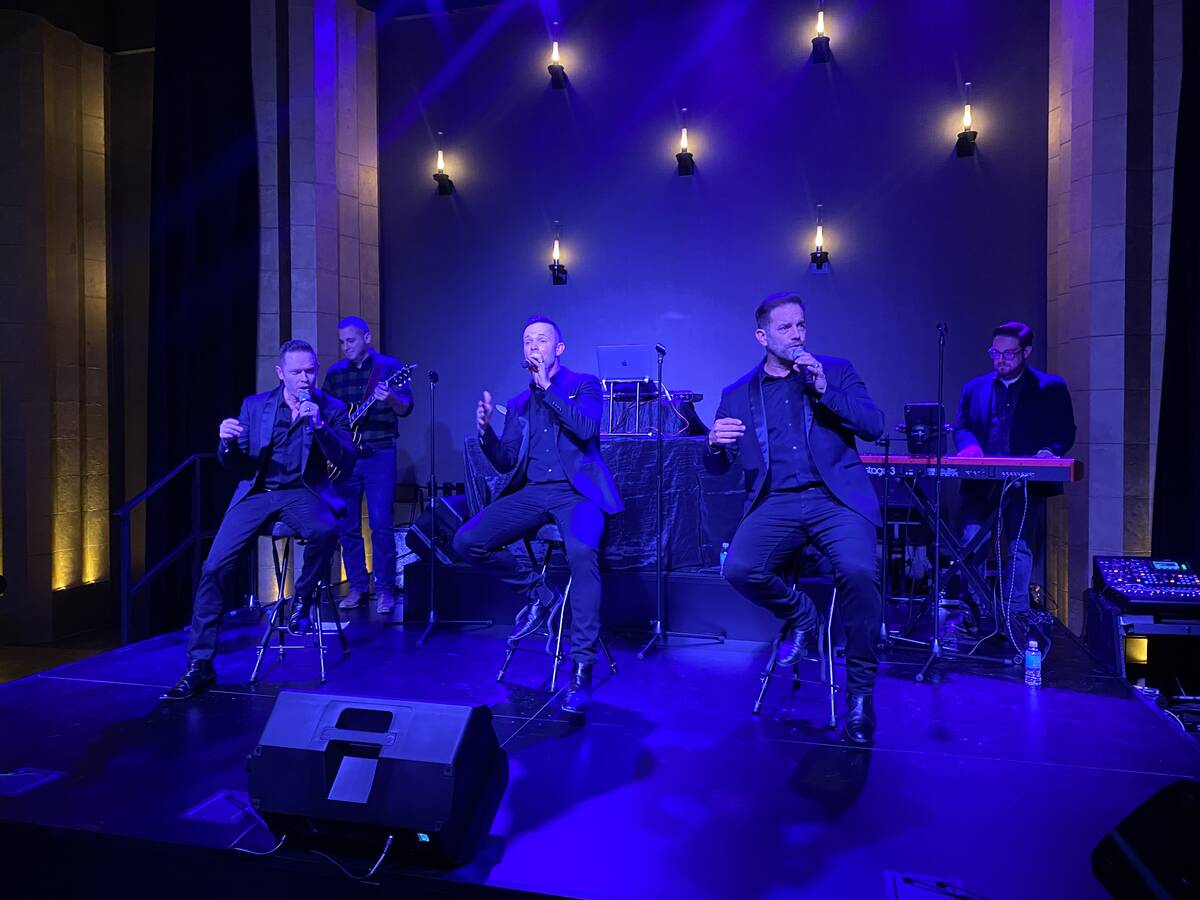 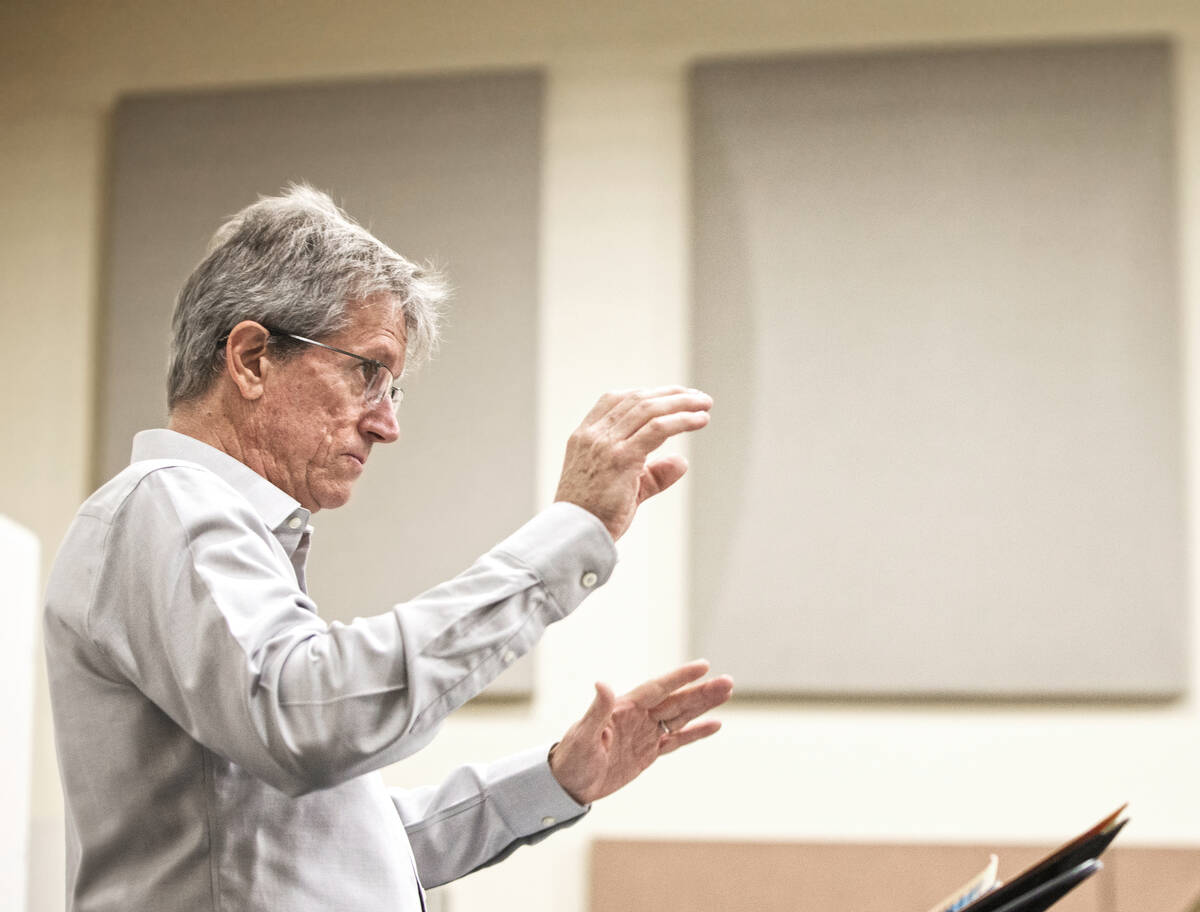 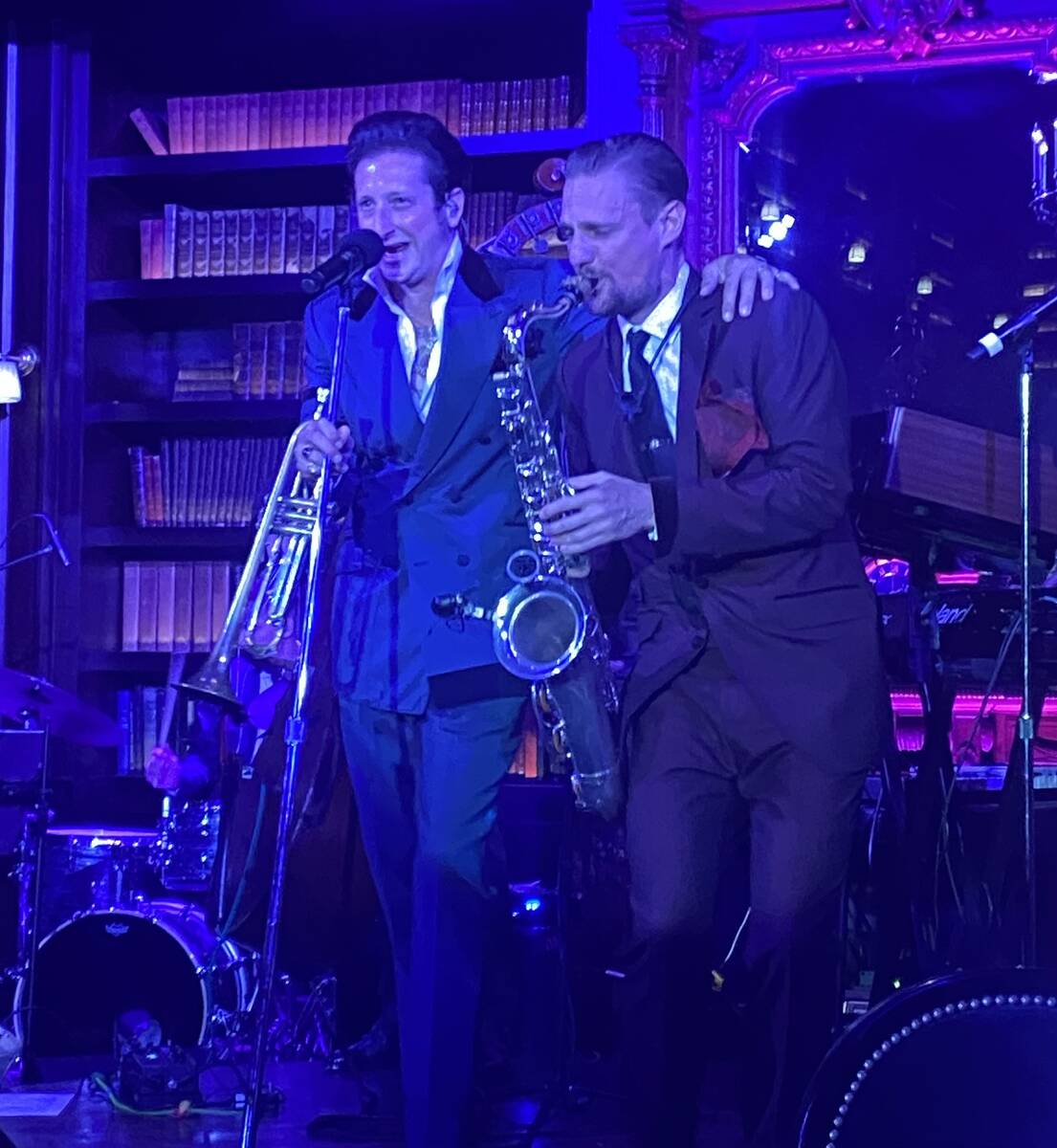 “The show must go on,” Andrew Tierney said Friday night. Human Nature had for the first time performed as a three-man unit in Las Vegas, the highlighted entertainment at the KMA Power of Love VIP event at Wally’s Wine & Spirits’ speakeasy at Resorts World.

Tierney and his brother, Mike Tierney, and group co-founder Toby Allen covered familiar territory with “Ooo Baby Baby,” “My Girl,” “Just My Imagination (Running Away With Me),” “Baby I Need Your Loving” and “Stop! In the Name of Love.”

The three-part harmonies were great, the grooves inspiring, as HN moves forward in Vegas without co-founder Phil Burton, remaining in Australia. The long-term horizon seems a residency in Vegas next fall.

Short term, the Aussies have sold out their Christmas show at South Point Showroom from Dec. 17-19. Expect a fourth date added. We well remember the act’s premiere in 2009, at the old Imperial Palace Showroom, with Robinson as presenter. I can’t recall anyone forecasting this type of longevity.

Dave Loeb’s UNLV Jazz department, a pipeline to Sante Fe & The Fat City Horns (among myriad other Vegas bands), continuing on to Lady Gaga’s orchestra, is back in performance at UNLV’s Ham Hall at 7:30 p.m. Tuesday.

UNLV Jazz Ensemble I, directed by Loeb and Nathan Tanouye (a member of both aforementioned bands), performs as it celebrates the release of its latest CD, “Looking Up.” Las Vegas’ Laura Taylor, a jazz vocalist, will be featured with Jorge Machain, a UNLV alum and jazz trumpet artist.

The celebrated UNLV Jazz Ensemble I was co-winner of the 2021 DownBeat Student Music Award for best graduate college jazz ensemble in the nation. In 2022, the UNLV Jazz Ensemble I will perform at the Monterey Jazz Festival after winning the Monterey Next Generation Jazz Festival College Big Band Division. Since 2010, UNLV jazz has received 33 prestigious DownBeat Magazine Student Music Awards, considered among the highest recognition in jazz education internationally.

Brian Newman invited members of “Magic Mike Live” at the Sahara to the opener of his current “After Dark” run at NoMad Library. The trio peeled their shirts and gyrated to great delight along the narrow runway dividing the room. But a fourth guy leapt into the act and also started grooving. Not part of the show. At all. Credit sax man (and occasional security official) Steve Kortyka with some forceful, verbal intervention to send this individual whence he came. I understand he runs a Twitter account from a Las Vegas bar …

We have heard from multiple sources who would know that a woman attending a recent “Magic Mike Live” show walked out of the ladies’ loo, totally naked. She was reminded, this is not that kinda show (Kortyka was not involved in this incident).

Original Chaos, the hard-rock cover band headed up Dai Richards of Tenors of Rock, plays 2 p.m.-7 p.m. at Carnaval Court between Harrah’s and The Linq Hotel. The band plucks freely from Van Halen to Stone Temple Pilots to Rage Against the Machine. On Oct. 29 at Railhead at Boulder Station, it’s a cover of Guns N’ Roses’ “Appetite For Destruction.” Richards calls it, “A diverse coverage of rock.”