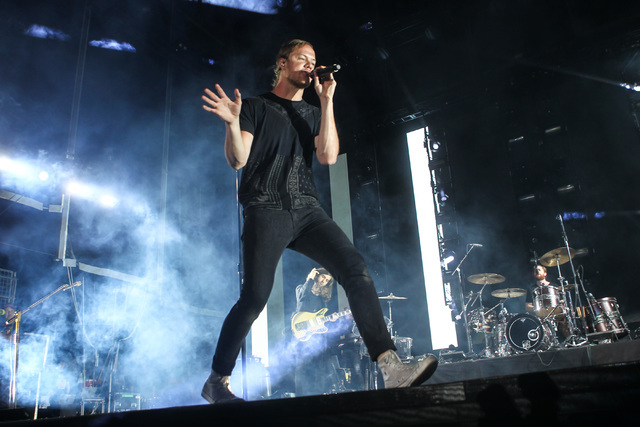 Dan Reynolds and his wife, Aja Volkman of the alt-rock band Nico Vega, have recently learned they are expecting twins. Obviously, they must select a pair of names.

And the title of Reynolds’ band, Imagine Dragons, most recent album is two words that fit naturally together.

“So, maybe we go with Smoke and Mirrors? Is that the suggestion?” Reynolds said with a laugh during a phone conversation Monday afternoon. “I don’t know. Would it really come to that?”

“Hah! Well, we do know they won’t be identical twins, so it’ll be a lot more difficult than when we named Arrow,” Reynolds said, referring to the couple’s 4-year-old daughter. “We have a lot of time to think it over. Right now we’re just really excited.”

The band is boundlessly active, beginning work on a follow-up to “Smoke + Mirrors” as its annual “Slay Cancer With Dragons” Tyler Robinson Foundation gala approaches. The event is Friday night at Caesars Palace. The charity is a pediatric cancer treatment and support organization, named for a young fan from Provo, Utah who was suffering from a brain tumor.

Tyler Robinson listened to the band’s music to gain strength and inspiration, and the band learned of his condition through posts on Facebook. During a club show in Provo, the band dedicated, “It’s Time,” to Robinson, who was in the audience and watched while hoisted on the shoulders of his brother, Jesse. Tyler Robinson succumbed to the disease in March 2013, at age 17, but his legacy lives on through TRF.

“It’s our third year and it’s really coming into its own,” Reynolds said of TRF’s brief history. “We’re not setting any target for donations. There is no minimum and no limit to what we do.” Criss Angel, a who shares the band’s passion for pediatric cancer research and support with his budding Johnny Crisstopher Children’s Charitable Foundation, will be on hand and recognized by host Chris Harrison from “The Bachelor” for his philanthropic efforts.

The band is to perform an acoustic set Friday, amid a creative spell as they begin work on their next album. The album is being recorded at a measured pace in the same Las Vegas home studio the band used for “Smoke + Mirrors.” Reynolds and band mates Ben McKee, Wayne Sermon and Daniel Platzman assembled about a month ago to begin recording.

“We’re going at our own speed, and I am still writing – even right now I am writing a song – and I feel I am in a lot better place than I was with ‘Smoke + Mirrors,’ ” said Reynolds, who said he experienced bouts of depression in early 2015, just as “Smoke + Mirrors” was being released. “Songwriting, to me is like writing journal entries, and I am in a very good place right now.”

It seems as if Bill Walton has attended every John Fogerty performance at Venetian Theater.

That’s because Bill Walton has attended every John Fogerty performance at Venetian Theater.

This is not uncharacteristic behavior for Walton, usually wearing a tie-dye shirt, jeans and an uncommonly wide smile. He has estimated he saw the Grateful Dead 800 times, including the band’s dates in 1992 at Sam Boyd Stadium and on such international tour stops as the pyramids in Egypt in 1978. Look for him, too, at Bob Dylan’s shows at the Chelsea at the Cosmopolitan on Oct. 13.

The Life is Beautiful festival wrapped Sunday night with a performance by the Lumineers on the Ambassador stage. I made just Sunday night, but I can say I agree with LIB Chief Executive Officer Justin Weniger’s pre-festival assessment that the three-day event is greater than the sum of its parts. The walk-around experience of downtown Las Vegas, the food and art mixed with the variety of music, was a lot of fun.

During a chat from his Las Vegas office on Monday, Las Vegas Events President Pat Christenson said the event was a civic success. “It was a lot easier to maneuver than in previous years, the EDM part really added a lot to the music experience,” he said. “Some of the economics are a challenge – it’s an expensive thing to put on – but what they have built as a downtown festival has made it a very good location.”

… By the brief cancellations of a couple of Strip shows over the past few days. “Baz – Star Crossed Love” at Palazzo Theater abruptly dropped its Saturday show after a spate of cast illnesses. Ticket-holders were sent across the hall to Human Nature’s “Jukebox” show. And Terry Fator cancelled shows Thursday, Friday and Saturday at his theater at the Mirage after an undisclosed (but not serious) illness. Evidently, Maynard Tompkins, too, was under the weather …

Hanging with Plaza Chief Executive Officer Jonathan Jossel at LiB on Sunday (he was the one wearing the Guns N’ Roses tour T-shirt) reminded of Oscar Goodman’s one-liner at Goodman’s latest dinner series talk at Oscar’s Beef, Booze & Broads at the hotel. Speaking about Lefty Rosenthal and Anthony Spilotro and the days when many hotel-casinos (in this instance the Stardust) were operated by mob overlords and suggesting the city was more efficiently run in those days, Goodman looked at Jossel and said, “The good news is, we are at the Plaza, which is run by the mob!” Jossel grinned, or maybe winced. Goodman was on a roll that night.