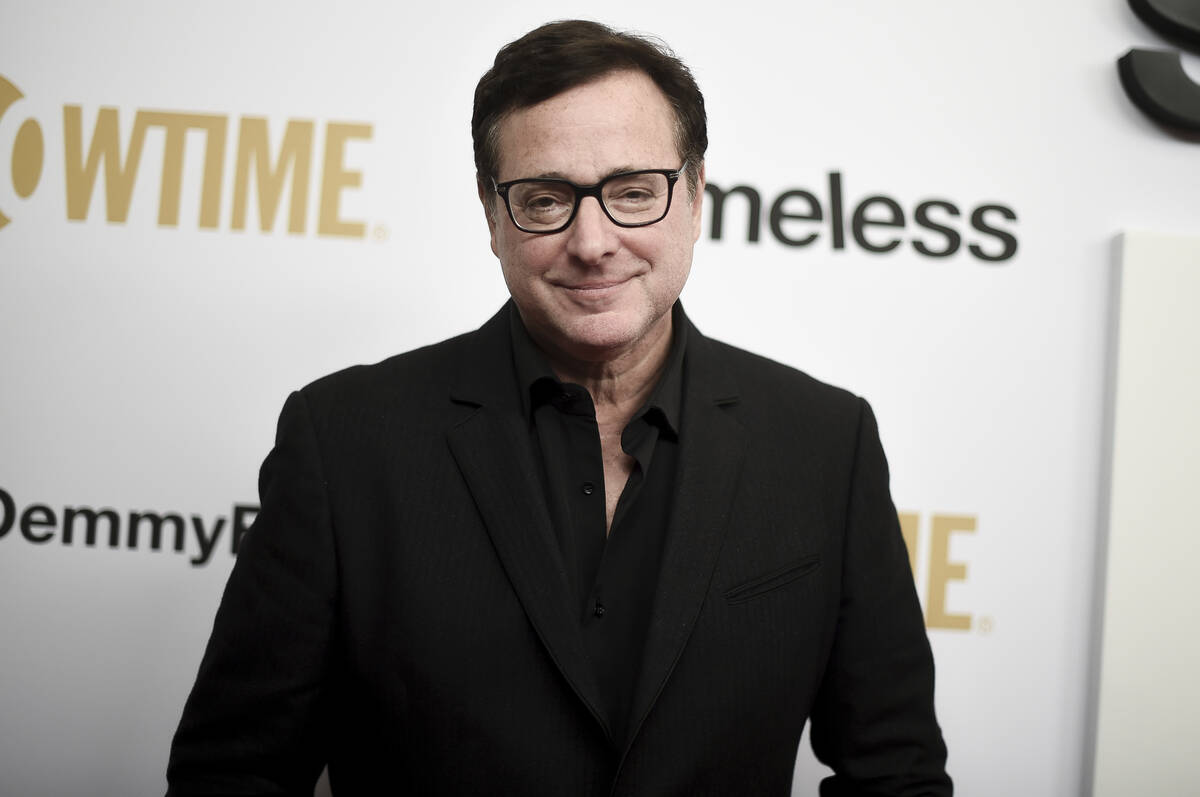 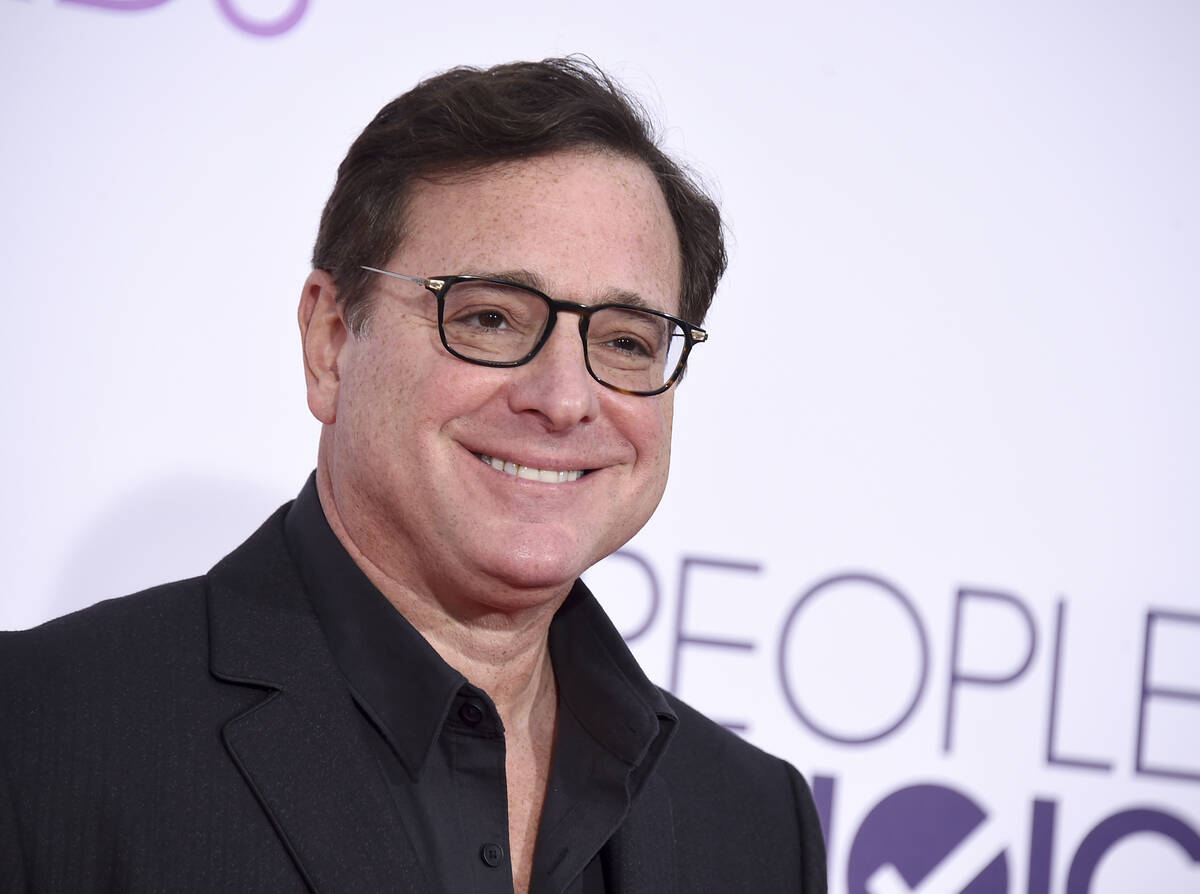 Bob Saget arrives at the People's Choice Awards at the Microsoft Theater on Wednesday, Jan. 18, 2017, in Los Angeles. (Photo by Jordan Strauss/Invision/AP) 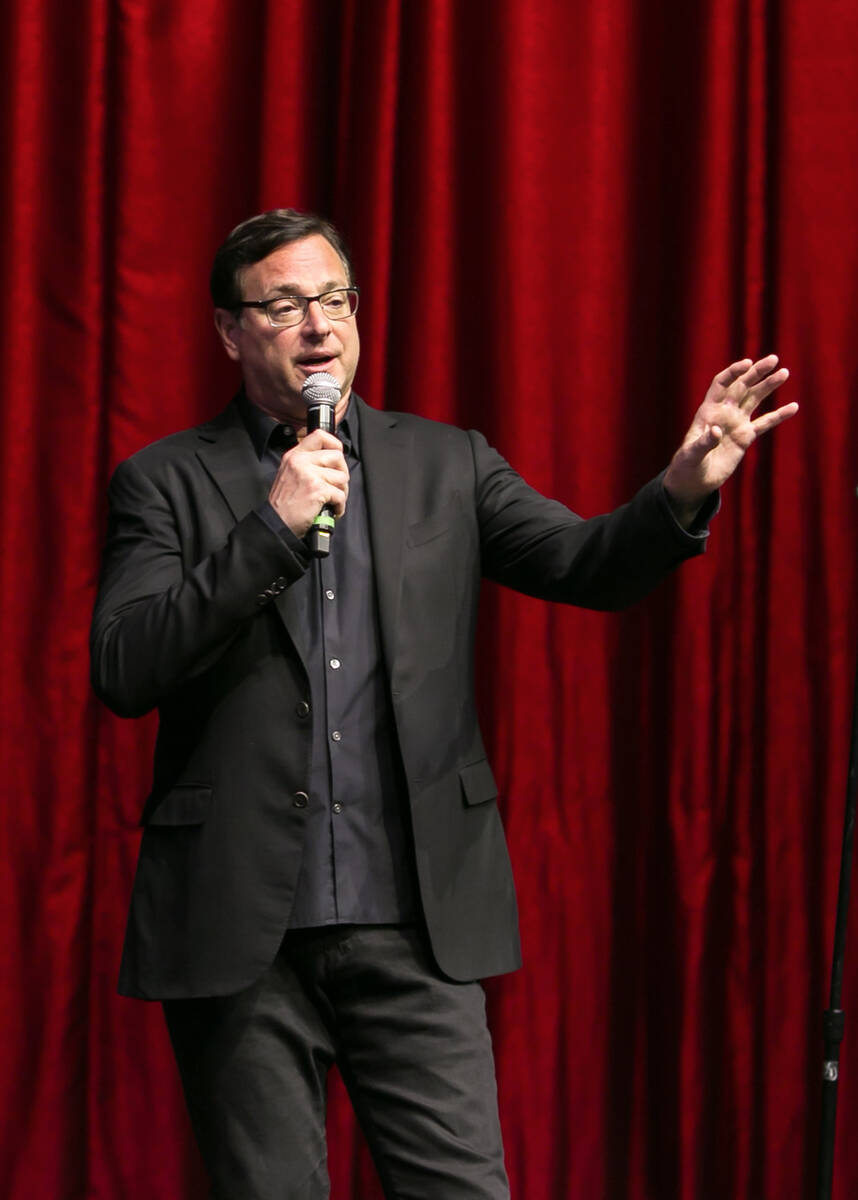 In what would be his final interview, Bob Saget gave a call out to a comic contemporary on the Strip.

Saget praised none other than Carrot Top.

Saget, who died Sunday at age 65 in a hotel room near Orlando, Florida, appeared Friday on the “Monsters In The Morning” show on Orlando’s Real Radio 104.1-FM. Saget’s final stage appearance would be Saturday at Ponte Vedra Concert Hall in Ponte Vedra Beach, Fla.

Rollins said it was unfair for other comics to “goof on and make fun of” on Carrot Top over the years.

“It’s not a good idea. It’s wrong,” said Saget in a split-screen, Zoom-style format with the show’s hosts. Saget then spoke of the Carrot Top-Rogan interview.

“What was the outcome?” Saget asked rhetorically. “Carrot Top came off great with Joe, right?”

Saget praised C.T.’s enduring show at Luxor, saying, “He goes to Las Vegas, he gets a residency, he sells it out constantly and he’s making thousands of people laugh. Anybody who makes thousands of people laugh and not doing anything with malice — he’s just being silly — leave the guy alone. It might not be your cup of tea, but you’re doing something great for people.”

On Monday night, just before returning to his show at Atrium Showroom at Luxor, Carrot Top said, “I guess he was a big fan. I didn’t know that because we didn’t hang out.”

But Carrot Top and Saget have been repped by veteran entertainment agent Steve Levine, who related Saget’s feelings for the comic over the weekend.

“I’m really touched by it,” said Top, whose legal name is Scott Thompson. “He was the first comic I saw in L.A., at the Comedy Store, when I was 20.” The comic paid tribute to Saget at his show at Atrium Showroom, saying the comedy world was suffering a great loss, then showed a video of … the late Betty White. “Wait, that’s not Bob,” Carrot Top called out, before the image was swappet for Saget. It was a final bit for the late stand-up and actor.

Saget played the congenial Danny Tanner on “Full House” on ABC. He was also the similarly beguiling host of the syndicated “America’s Funniest Home Videos.” At this writing, the cause and manner of Saget’s death has not yet been reported.

As Martin Mull would say, on TV Saget was as pure as driven snow. But his material turned a deep blue when he hit the stand-up stage.

Saget was a recurring headliner in Las Vegas. His last Vegas show was at Brooklyn Bowl on Sept. 16, 2017. His friends in the Las Vegas comedy community readily recalled that dichotomy after Saget’s stunning death.

Long-running Vegas headliner George Wallace met Saget in 1979, when both were starting at the Comedy Store in L.A.

“Some of the people who went to see him onstage thought they were there to see Danny Tanner, and he’d immediately spring his material on ‘em,” Wallace said Monday. “It was like going to see Redd Foxx when he was on ‘Sanford and Son.’ People thought they were getting Fred Sanford. Uh-uh. Not tonight.”

Penn Jillette recited a quote from one of his favorite poets when remembering Saget.

“Allen Ginsburg said, ‘The poet must stand naked onstage.’ Both Rickles and Saget had this way of saying, ‘I’m going to say some incredibly bothersome stuff, but before that I’m going to hand my heart out to all of you. You can examine it, feel it, look at it, taste it, and listen to it. If you think it’s impure, don’t laugh.’ ”

Jillette had known Saget for years, as the two had gained fame about the same time. They dined together once a year and talked three or four times annually.

“We’d go to the Peppermill, and when the server would come over, he would start, right away, saying the most offensive stuff possible, then take it all back with this big smile on his face,” Jillette said. “He would keep doing this all through the meal, until every person around us, every gender, every ethnicity, every age, would be laughing.”

Jillette explained, “The point is, off-camera, he was exactly the same person as he was on-camera. He just told dirty jokes. That’s not being a different person, because the love in his heart was always there. He loved, I mean loved, making people laugh.”

Jillette tapped in to Saget’s darkly brilliant comedy recesses in the 2005 movie “The Aristocrats.” The film, produced by Jillette and and the comic-filmmaker Paul Provenza, featured dozens of stand-ups and comic actors telling the version of the famously bawdy, vaudevillian joke. The setup is a family act walking into a talent agent’s office. The description of the family’s act is improvised (almost always an excessively crude representation).

For the punch line, the agent says, “That’s a great act! What do you call it?” The answer is, “The Aristocrats!”

Saget’s version of the joke, remarkable partly because he dovetailed into an impression of Curly from the Three Stooges, was described by Rolling Stone as “possibly the filthiest joke ever told.”

Saget was a member of the late-1970s comedy boom in L.A., and became tight with Wallace in those days, when club owner Mitzi Shore ran the club and launched dozens of comics’ careers.

“I’m shocked, because this is so random, and I don’t know what to say other than he was part of my family and part of the comedy culture not just for us, but for people around the world,” Shore’s son, the comic actor and Vegas resident Pauly Shore, said Monday. “We all loved him. I loved him. It’s maybe a cheesy statement, but we are not here forever. He’s 65, he goes to sleep, he doesn’t wake up — I mean, what the (expletive) is that? I’m just so sad about it.”

Shore continued, “When you’re a stand-up, a lot of what comes out is unexpected. Bob was this happy-go-lucky guy, but was was definitely, definitely blue. People thought, ‘Wow, that’s not who I thought he was,’ and I guess it turned some people off, but it turned a lot of people on, too.”

Laugh Factory at the Tropicana club operator and occasional headliner Harry Basil recalled the early days of club comedy on the Strip. He and Saget appeared regularly at the Comedy Store at the Dunes, which Mitzi Shore opened in 1984.

“We did a week, me, Bob and Dom Irrera, at the Comedy Store and we were out at the pool at the Dunes,” Basil said. “We’d take turns getting up and going over to the house phone to page people, like Moe Greene and all the entire cast from ‘The Godfather.’ We were just like little kids, laughing when we did this.”

Wallace was asked if he thought his friend would rather be remembered for his famous TV sitcom role or the comic who appeared onstage for more than 40 years.

“His stage persona,” Wallace swiftly said. “That’s why he left the show and went on the road, to be the real Bob, and those of us who were comedians loved him.”