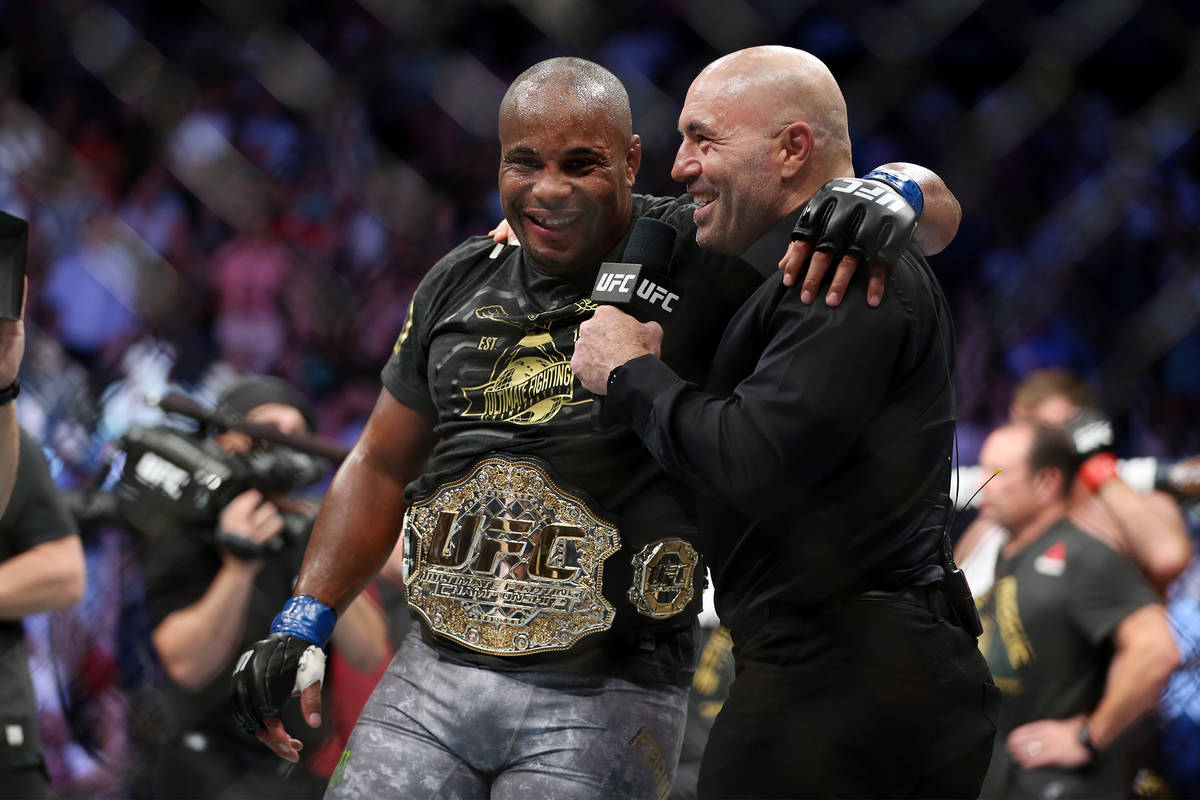 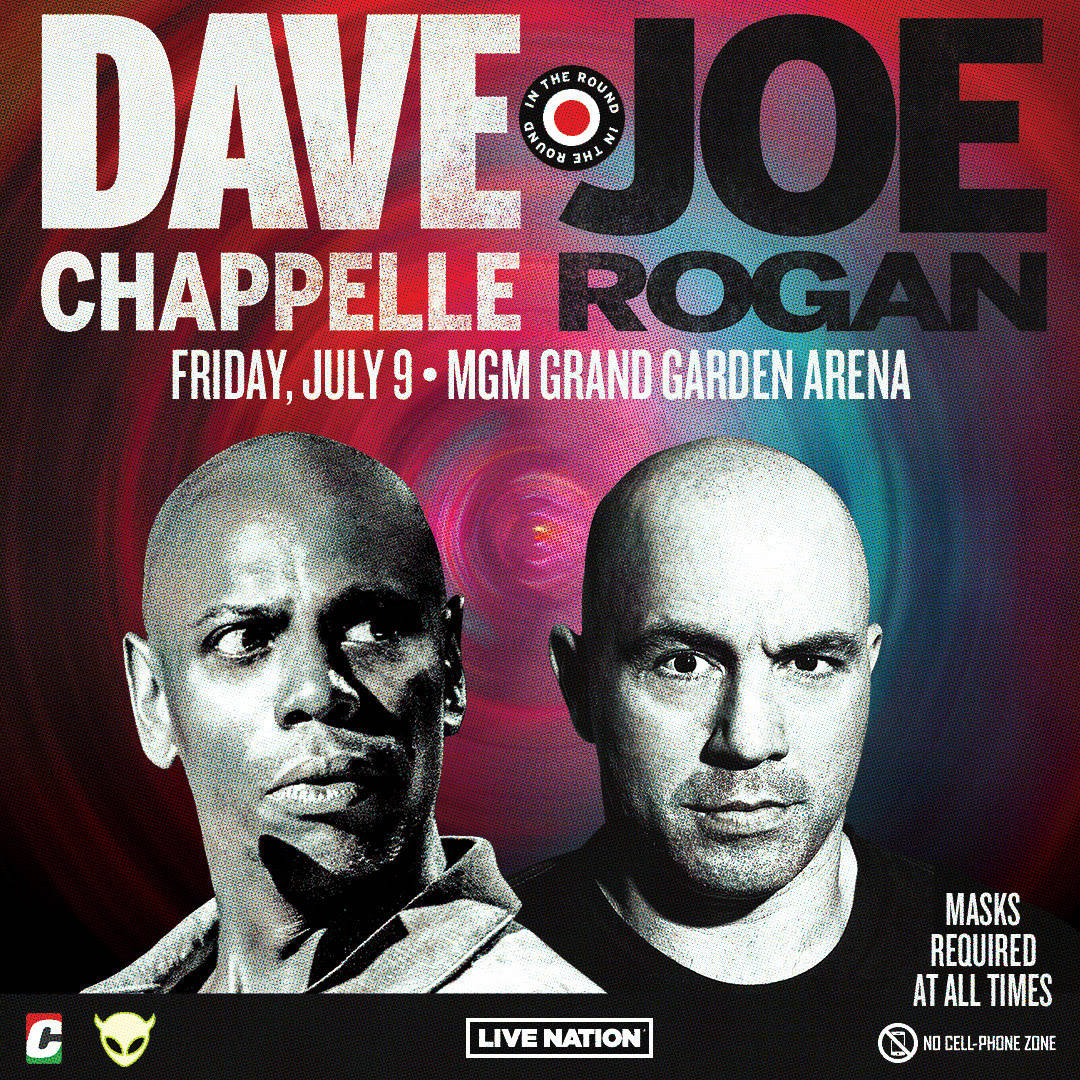 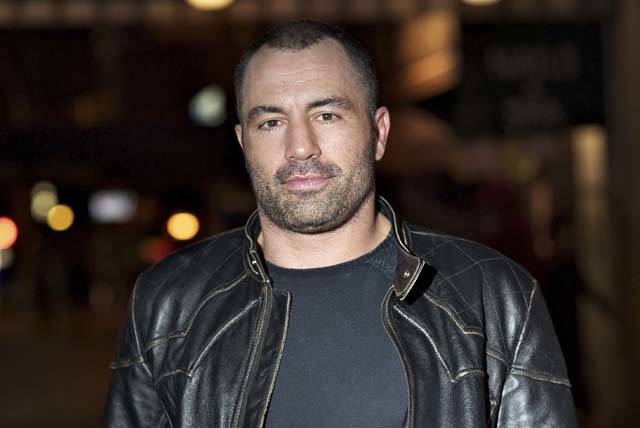 Joe Rogan’s jab about jabs has caused a stir.

Just as Rogan was announced as Dave Chappelle’s headliner at MGM Grand Garden on July 9, the star comic and UFC announcer made medical news on his podcast. On Friday’s episode of his wildly popular and influential Spotify podcast, “The Joe Rogan Experience,” Rogan said younger people need not receive COVID vaccinations.

“But if you’re like 21 years old, and you say to me, should I get vaccinated? I’ll go no. Are you healthy? Are you a healthy person? Like, look, don’t do anything stupid, but you should take care of yourself. You should — if you’re a healthy person, and you’re exercising all the time, and you’re young, and you’re eating well, like, I don’t think you need to worry about this.”

MGM Resorts International spokesman Brian Ahern said in a statement emailed Wednesday night: “Nothing is more important to us than the health and safety of our guests, employees and community, and vaccination is a key tool in helping to end the pandemic and boost our economic recovery. We strongly encourage everyone to get vaccinated and have made vaccinating our workforce and community one of our top priorities.”

“I guess my first question would be, did Joe Rogan become a medical doctor while we weren’t looking?” White House communications director Kate Bedingfield told CNN. “I’m not sure that taking scientific and medical advice from Joe Rogan is perhaps the most productive way for people to get their information.”

Fauci added, “Even if you don’t have any symptoms, you are propagating the outbreak because it is likely that you — even if you have no symptoms — that you may inadvertently and innocently then infect someone else who might infect someone who really could have a problem with a severe outcome.”

Rogan’s appearance with Chappelle is just the second event at full-capacity at MGM Grand Garden since the pandemic shutdown in March 2020. Chappelle’s first show, “Dave Chappelle & Friends” on July 2, has sold out at 13,000 seats. It is expected his performance with Rogan fill the place, too.

Update: On Thursday, Rogan recalibrated his comments on his podcast. “I am not an anti-vaxx person. In fact, I said I believe they are safe and I encourage many people to take them.” He also added, “I’m not a doctor. I am a (expletive) moron. And, I’m a cage-fighting commentator who’s a dirty standup comedian … I’m not a respected source of information even for me … “But, I at least try to be honest about what I am saying.”

We are confident in reporting two of the earliest hired guns at Resorts World Las Vegas are Uncle Kracker and Darius Rucker. They are among the headliners planned for the resort’s July 4 weekend gala opening, with Kracker at Dawg House Saloon (which we’ve originally noted) and Rucker at the hotel ballroom.

Kracker has is the former turntablist for Kid Rock’s Twisted Brown Trucker. The country rocker most recently played Vegas in January 2020, at The Railhead at Boulder Station

Rucker rose to fame as front man of Hootie & The Blowfish, and is a recurring Vegas headliner with the band and as a soloist. He performed the private concert at Tiger Woods’ “Tiger Jam” charity event at MGM Grand in 2017. Resorts World President Scott Sibella was the head of MGM Grand in those days.

We do not expect any of the half-dozen announced Resorts World headliners to be onstage, or the Theater at Resorts World to be activated earlier than the fall. But there should be some surprises as the hotel opens. And also, pyro.

Virgin Hotels Las Vegas is going with a shot of JMSN in the new the resort’s first show to be put on sale. Sound out those letters, and you’ll get the reference: “Jameson.”

The R&B multi-instrumentalist, vocalist and producer is set to play the 24 Oxford (the former Vinyl venue at Hard Rock Hotel) on Nov. 6, as part of his “Heals Me” U.S. tour. JMSN, whose birth name is Christian Berishaj, is not a well-known name in Las Vegas. His only date, to date, in in town was in January 2019 at the downtown Las Vegas music haunt the Bunkhouse.

But someone who is a big name in Vegas, and everywhere else, is a fan. Usher, set to headline the Colosseum at Caesars Palace, told the music magazine NME in April 2012 that JMSN was his “favorite new act.” Tickets are onsale Friday.

I’ll be seeing him

Word from multiple contacts in the field leads me to believe a Liberace attraction is heading to Westgate Las Vegas by the fall. The master showman headlined for years at the property when it was the Las Vegas Hilton. The showroom was also site for his “Leapin’ Lizards It’s Liberace” 1978 network-TV special. Debbie Reynolds was the guest star. The mirrored Rolls Royce was the featured vehicle. And, Phyllis Diller made a cameo appearance. You can find this gem for five bucks at Amazon.com.

A show that has survived COVID: “Puppetry Of The Penis.” The distinctive stage show returns May 14, with co-stars Jamie Morris and Robert Ryan returning to their lead roles. The show returned for a single show in June before realizing, very swiftly, it could not draw a crowd in COVID. Even the offer of free hot dogs failed.