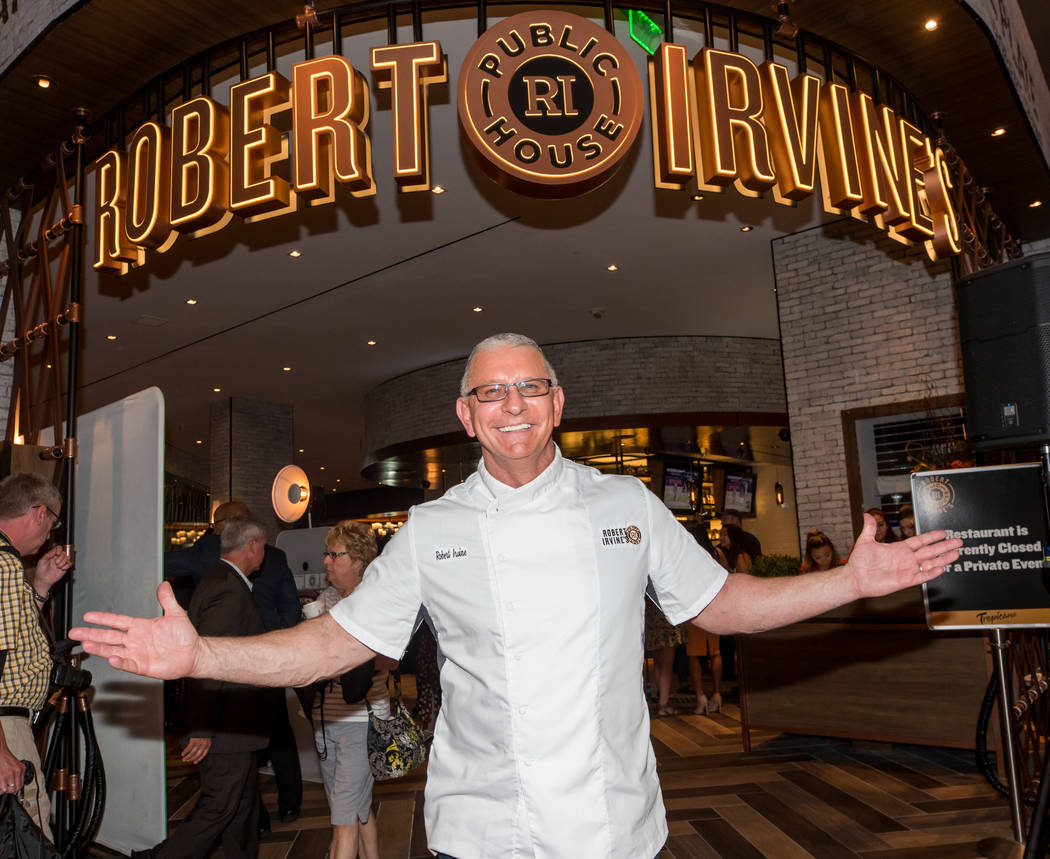 Robert Irvine is shown at the opening of Robert Irvine Public House at the Tropicana on Thursday, July 27, 2017 (Erik Kabik Photography) 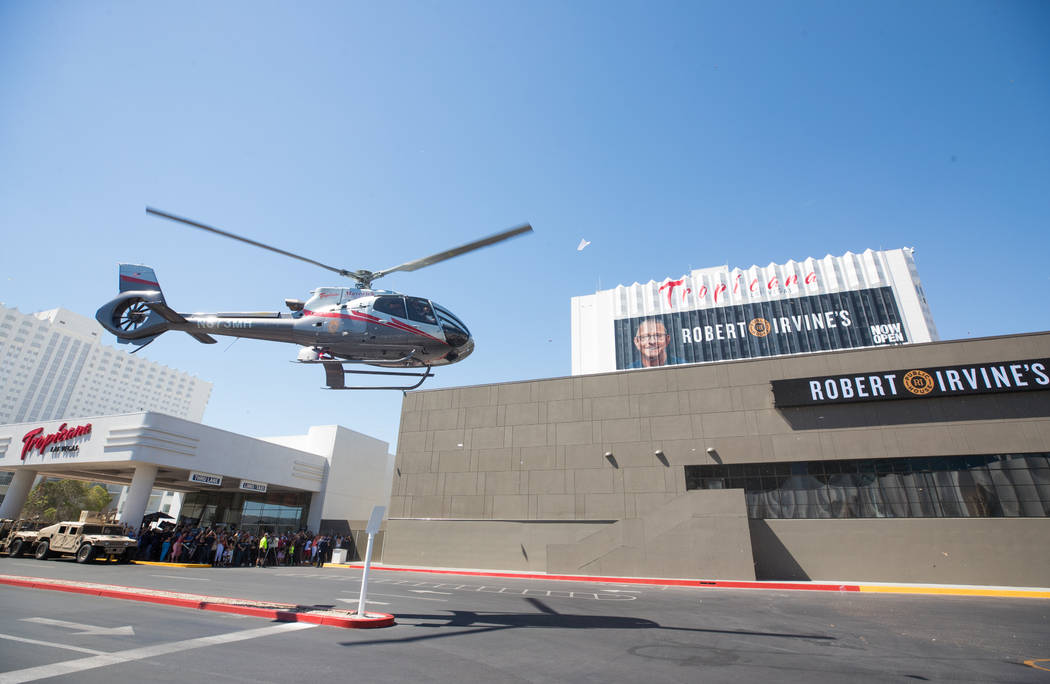 A helicopter carries Robert Irvine to the opening of Robert Irvine Public House at the Tropicana on Thursday, July 27, 2017 (Erik Kabik Photography) 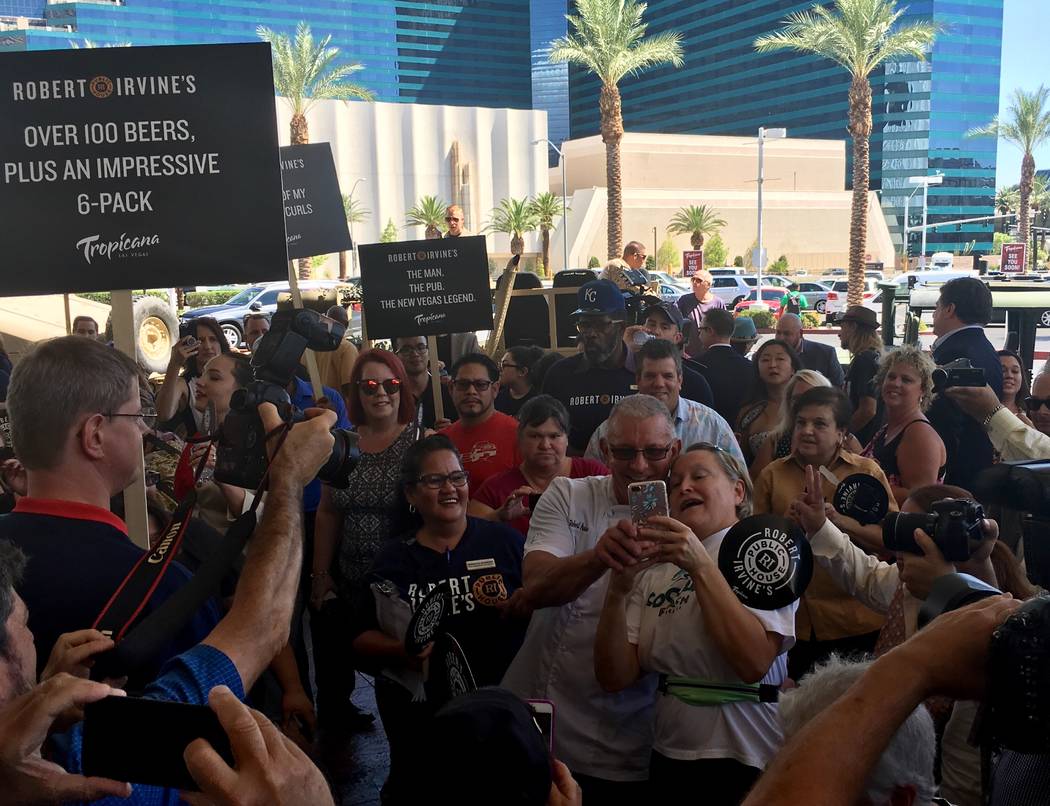 Robert Irvine did more than just arrive at the Tropicana on Thursday morning. It was more like an invasion — touching down in a dust-and-pebble storm created by a Maverick helicopter. After climbing out of the chopper and wading his way through a couple hundred well-wishers and casino execs, Irvine arrived at his eponymous new restaurant, Robert Irvine’s Public House, where he summarily smashed an ice sculpture of his new restaurant’s logo.

A rote ribbon-cutting just isn’t Irvine’s style. In 2016, he rappelled some 22 stories down the side of the Trop — with only a spotlight to guide his way — to announce his partnership with the hotel.

Irvine was joined in his formal comments by Medal of Honor recipient Hershel W. Williams and Tropicana General Manager Aaron Rosenthal. USO officials and upwards of 30 members of the military turned out in a show of appreciation for Irvine’s longstanding support of the armed services. The frequent Food Network guest and host of the CW’s “The Robert Irvine Show” served 10 years in the U.K. Royal Navy.

After his smashing arrival, Irvine took a few minutes to dish about dining and other matters.

You’ve already had a wild day and it’s barely noon. How are you doing?

It’s an emotional day, really. It took 18 months to get here. A couple of days ago, 600 people ate here and everything that could have gone wrong, did. Everything failed. (Wednesday) we did an amazing night for 350 folks and the food, drinks, and service was spectacular. When you open a restaurant, you don’t know what the first week is going to be like, but we nailed it.

With so many dining options in Las Vegas, why am I eating at your restaurant? Why am I sending my friends and family who visit here to the Trop?

The service is going to be different. Our servers literally take our guests, when they’ve finished the meal, to the door and they also greet them personally. The feeling is, we care about you. It’s not about the money. If you notice, look at our prices – people can afford to eat here without feeling they’ve been ripped off. They can come here and have a relaxing time and not feel stressed, not spend much money and come back again and again. I want them to be part of my family.

In your research and time in Las Vegas over the past 18 months, what has been the biggest revelation?

I have learned service is really No. 1. People say they do service well at restaurants, and maybe they do, the first time. The second time it goes downhill and the third time it’s even worse.

You have to pay particular attention to quality control as you go forward, right? Your work is really just starting.

Yes. Consistency of product. Consistency of service. Get those folks who are coming in today, as we open, to come back. That’s why I have been here for all the cooks’ training, all the servers’ training. They know about my family, my wife, and every one of them can tell you about who I am. That relationship is carried to the people coming in to eat here.

We always wonder in Las Vegas how often a star chef will show up at his own restaurant. Will we see Robert Irvine hanging at Public House?

Yes, I’ve been here every week, two or three days, depending the schedule. I want to be part of their lives; I want to know the people who work here in the casino, the people in valet.

You have mentioned that you will have a suite upstairs here at the Trop as a residence, the Irvine Suite. Are you serious?

Oh, yes. It’s funny, when I talk to the executives here, I say, “Listen, just don’t give my room away.” I’m spending a lot more time here and I really believe this is going to be an amazing restaurant. It’s only going to be amazing if me and my team are here to make sure of it.

Since you’re a big supporter of the military, what do you think of President (Donald) Trump’s announcement that transgendered individuals can no longer serve in our armed forces?

I’m not going to comment on whether it’s right or wrong or indifferent. But when you’re fighting with somebody, no matter who they are or how they are – male, female, transgender – they are my people, right? If I am serving with a transgender person, he has a gun, I have a gun. He’s got my back and vice versa. That’s how I feel about it.