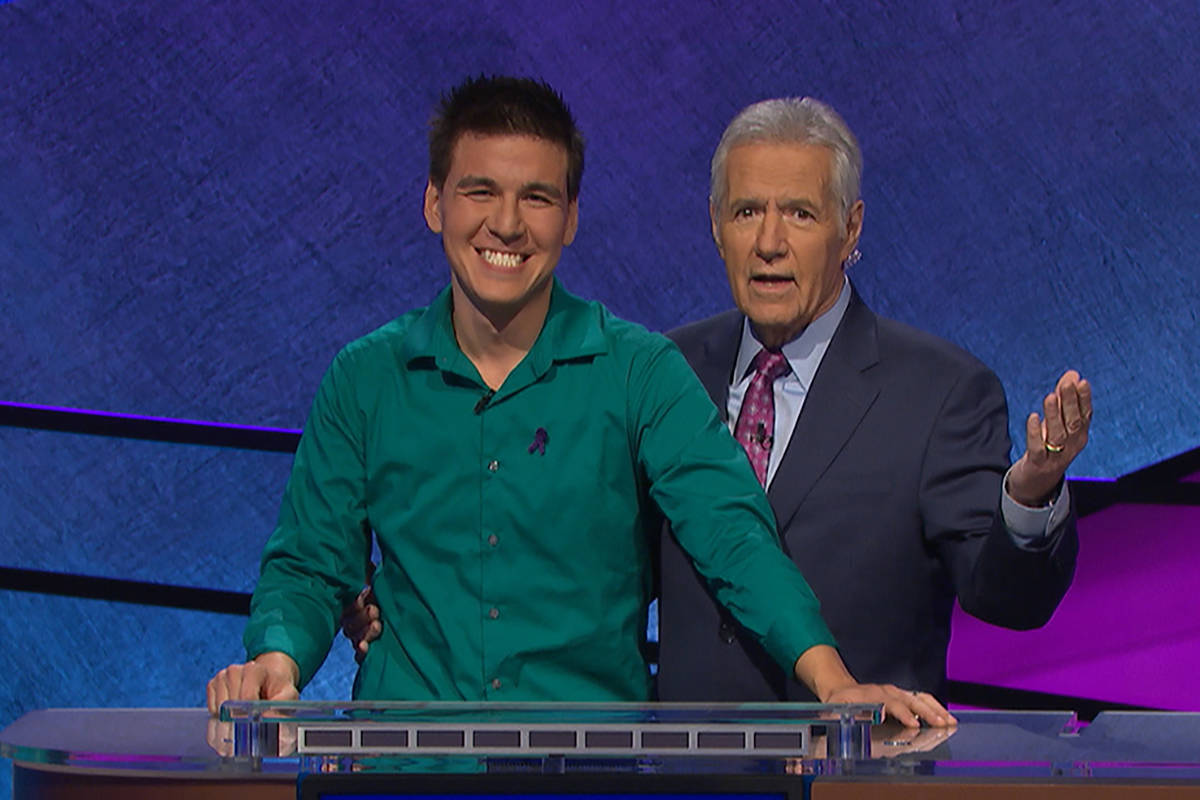 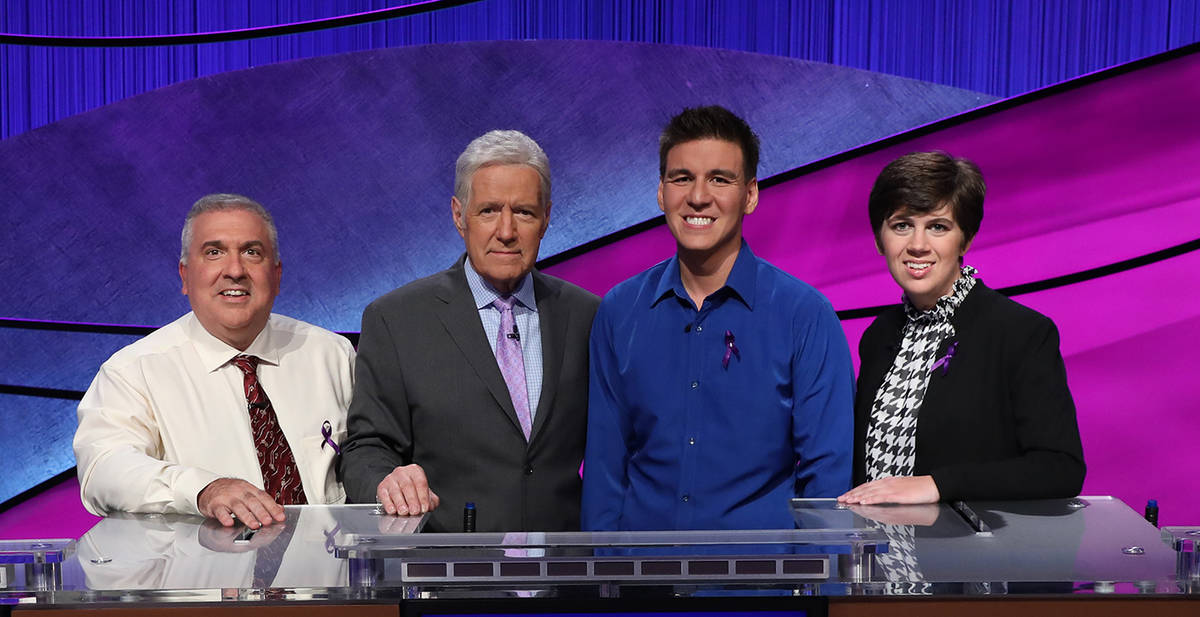 From left, Francois Barcomb of New York, “Jeopardy!” host Alex Trebek, James Holzhauer of Las Vegas and Emma Boettcher of Chicago are shown after the Tournament of Champions. Barcomb, Holzhauer and Boettcher were finalists for the tournament, which was taped in September, with the two-day finals televised Thursday, Nov. 14, 2019, and Friday, Nov. 15, 2019, on CBS in Las Vegas. (Photo courtesy of Jeopardy Productions, Inc.) 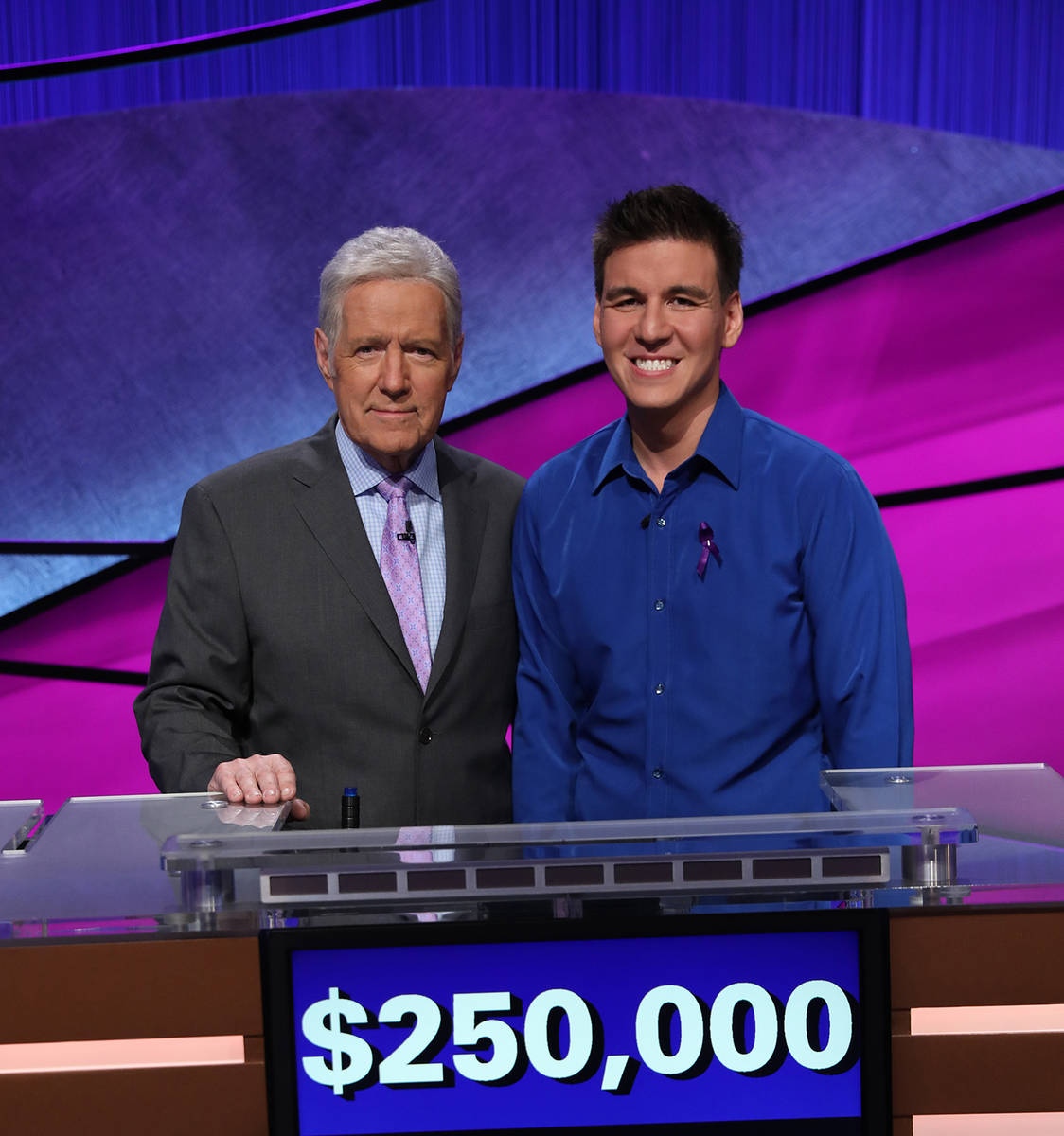 “Jeopardy!” host Alex Trebek, left, and Las Vegan James Holzhauer are shown after the Tournament of Champions. The two-week tournament was taped in September, and the two-day finals were televised Thursday, Nov. 14, 2019, and Friday, Nov. 15, 2019, on CBS in Las Vegas. (Photo courtesy of Jeopardy Productions, Inc.)

”It was one of the great privileges of my life to spend time with this courageous man while he fought the battle of his life,” James Holzhauer tweeted Sunday morning. “You will never be replaced in our hearts, Alex.”

It was one of the great privileges of my life to spend time with this courageous man while he fought the battle of his life. You will never be replaced in our hearts, Alex. https://t.co/LLoUASRMa9

Holzhauer later texted a statement, “Alex Trebek was a legend of American television who will never be forgotten or truly replaced. His courageous fight against cancer was an inspiration to all, and his charitable work touched countless lives. In a time where the country feels deeply divided, Alex will be missed by everyone.”

Holzhauer, a professional sports bettor who lives in Las Vegas, won $2,464,216 in his 33 appearances in 2019, making him the second-highest winner in “Jeopardy! non-tournament winnings and number of games won. Holzhauer trails only Ken Jennings, who won $2,522,700 in 75 episodes in 2004.

The official “Jeopardy!” Twitter account announced the news on Sunday morning, posting: “‘Jeopardy!’ is saddened to share that Alex Trebek passed away peacefully at home early this morning, surrounded by family and friends.”

Holzhauer, a Naperville, Illinois, native, made a donation in June 2019 to the Naperville Pancreatic Cancer Research Walk for $1,109.14 — his daughter Natasha’s birthdate — with the message “For Alex Trebek and all the other survivors.”

“I felt like I had to do something in Alex’s honor, and it was a great opportunity to show my hometown some love,” Holzhauer said at the time. “I was definitely surprised when that donation went viral.

“Whatever happens from here, I’m glad I had the opportunity to be on the show with Alex. I can’t imagine ‘Jeopardy’ without him.”

Trebek thanked Holzhauer’s daughter, who turns 6 on Monday, on one episode for a handmade card.

“I want to express my thanks to your beautiful little daughter, Natasha, for having made this get well card for me,” Trebek told Holzhauer. “That was very sweet of her.”

Besides the on-air banter between them, Holzhauer said he didn’t get to interact much with Trebek.

“Unfortunately, contestants don’t really get the opportunity to fraternize with the host,” he said. “Thanks, 1950s quiz show scandals!”

Holzhauer also was captain of the team “All In For Alex,” named in honor of Trebek, that planned to participate in PurpleStride Las Vegas, the walk to end pancreatic cancer scheduled for March 21 at Town Square.

Holzhauer’s team raised $2,569 before the event was canceled because of concerns about the coronavirus pandemic. The money was part of a total of $163,987 raised by the Las Vegas event that was donated to the Pancreatic Cancer Action Network (PanCAN.org).

Trebek hosted the long-running game show since its syndication debut in 1984.

Trebek revealed in March 2019 that he had been diagnosed with Stage 4 pancreatic cancer. He told USA Today in October 2019: “I have lived a good life, a full life and I’m nearing the end of that life.”