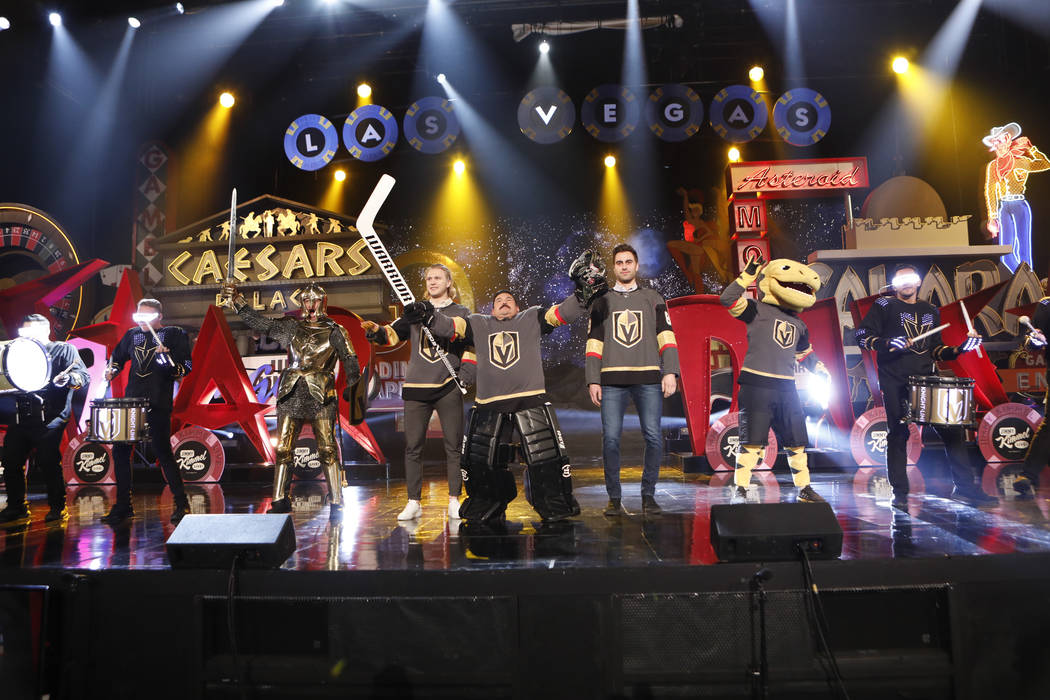 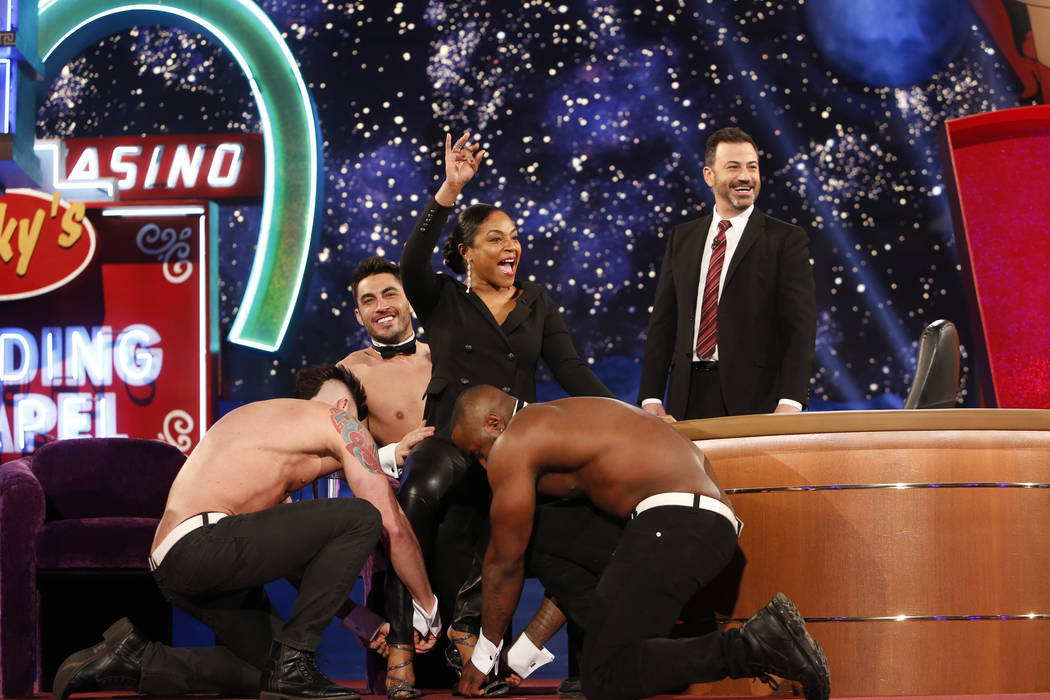 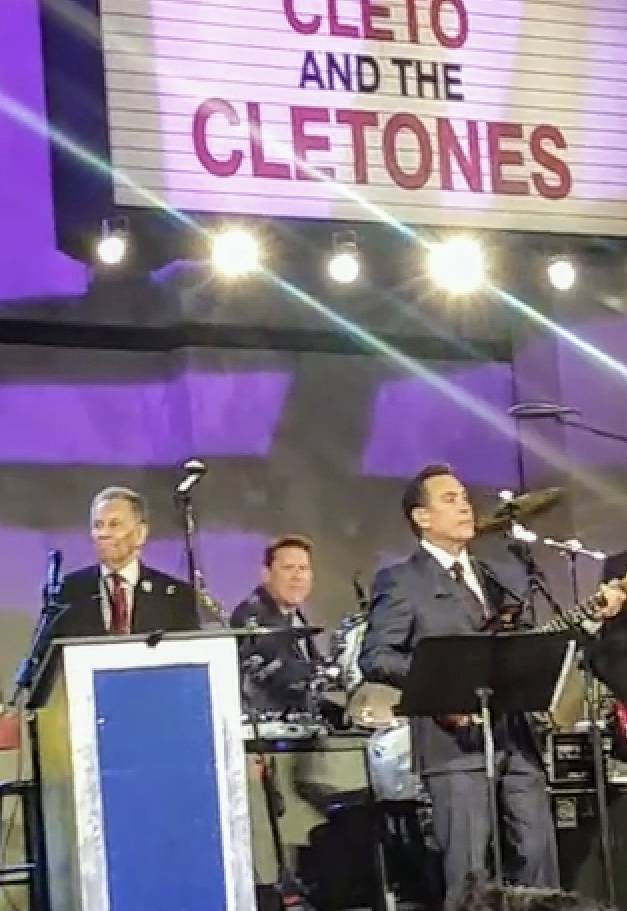 Jimmy Kimmel has seized the moment, and also unleashed his shirtless sidekick, Guillermo Rodriguez, in his week in VegasVille.

Some highlights from Kimmel’s ABC late-night show, and also his upcoming comedy haunt:

Harland Williams is the first headliner at Jimmy Kimmel’s Comedy Club, set to open for previews at Linq Promenade on May 2-8, with a more celebrated premiere in June. Williams played the luckless, urine-drinking patrolman in “Dumb & Dumber” and the “seven-minute abs!” hitchhiker in “There’s Something About Mary.”

Fahim Anwar headlines May 16-19, John Heffron from May 30-June 2, Beth Stilling from June 6-9, and Gina Brillon from June 13-16. The bar at the club, just a somersault across from Brooklyn Bowl, opens at 4 p.m. Shows are 8 p.m. Thursdays through Sundays, with additional performances 10 p.m. Fridays and Saturdays (for tickets and info, go to www.kimmelscomedyclub.com).

Kimmel promises surprise guests, “high-end, casual cuisine” and memorabilia. This is a two-level, 8,000-square-foot venue with a 300-seat capacity for ages 18 and older. Kimmel has said he plans to occasionally appear at the club on the same night he tapes his show in L.A.

“We are going to have fun with it, some of the things we will figure out along the way. We tape the show from 5 to 6 in L.A., so I can get on a plane at 7 o’ clock and be here for the show on a weeknight if I feel like it,” he said during an interview at Linq Promenade on March 16. “But we also want to put comedians on the show from Las Vegas. Rather than performing in front of a studio audience on television, they will be performing in front of a real comedy club audience.”

Jerry Lopez joined Cleto and the Cletones for the full show Wednesday. It was a natural fit, artistically and musically. Lopez has known Kimmel sincer he was a kid, and Cleto Escobedo III since Escobedo was a teen sensation on the Vegas entertainment scene.

“He was in a band called the Indigos at the Hilton lounge, and I passed by and heard this kid singing and playing the sax,” Lopez says, remembering the space that is now Westgate Cabaret at Westgate Las Vegas. “He was fantastic, and I realized who he was and it made sense.”

Escobedo’s father, Cleto Jr., was a hero of Lopez’s who was in a great band out of Texas, Los Blues. “They were just like the equivalent of Santa Fe & The Fat City Horns,” Lopez says. “We all became really close. I still talk to Cleto regularly.”

The younger Escobedo asked Lopez to join him onstage this week. The elder Escobedo still catches Santa Fe on Monday night at the Copa Room at Bootlegger Bistro.

“It was great,” says Lopez, who sang “Lucretia Macevil” by Blood Sweat & Tears, Elvis’s “Burning Love” and “Ain’t That Peculiar,” by Marvin Gaye. “Every one of those guys in the band are virtuosos, as good as anyone on the planet. It was really fun.”

Rodriguez was in a showgirl outfit with the dancers from “Vegas! The Show” at V Theater at Miracle Mile Shops at Planet Hollywood on Monday, visited “Chippendale’s” at the Rio for Tuesday’s show, and also shed his shirt at Barbershop Cuts and Cocktails at the Cosmopolitan for Wednesday’s telecast. He was later shown apparently passed out and sprawled across two seats at the slots at the Cosmo.

Maybe it was an act, or a mix of performance art and reality. On Wednesday, Kimmel asked Rodriguez how he really felt, and Rodriguez said, “To be honest, I feel terrible.”

Kimmel’s producers dug deep for some quintessential Vegas guests. They tracked down Vegas lounge icon Cook E. Jarr at Napoleon’s at Paris Las Vegas for one of the show’s guest intros. Kimmel loves the Jarr and featured a him in a cut-away performance several years ago.

Also, he lassoed longtime Vegas psychic reader and astrologist “Mystic Mona” Van Joseph. He pulled her along as he commandeered a bachelorette party that stopped at “Stripper 101” at V Theater, and then the Chipps show, where Rodriguez danced a number while impressively shirtless.

Kimmel unloaded a series of local TV spots from his youth for Wednesday’s telecast. He peppered his monologue with spots from Happy Harry of Quality Liquidators furniture outlets and Ben Stepman Yugo, “In Henderson, of course!”

As Mordechai famously claimes he has the best prices in town “or I will refund the difference,” Holmes calls out, “And he’s not pulling any punches!” He then fires a jab at the camera.

“You don’t know this unless you live here, but we have the best — and by best, I mean worst — local advertisements of any city in America,” Kimmel said. “This has been the case since I was a kid, and I was pleased to learn when I turned the TV on, this is still the case.”