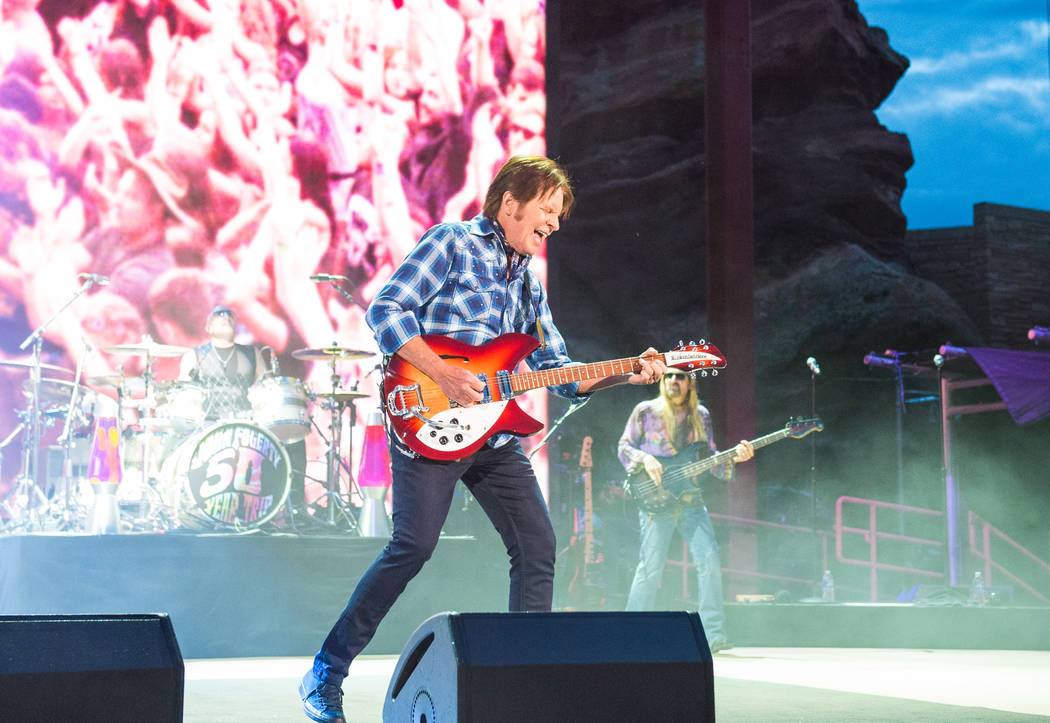 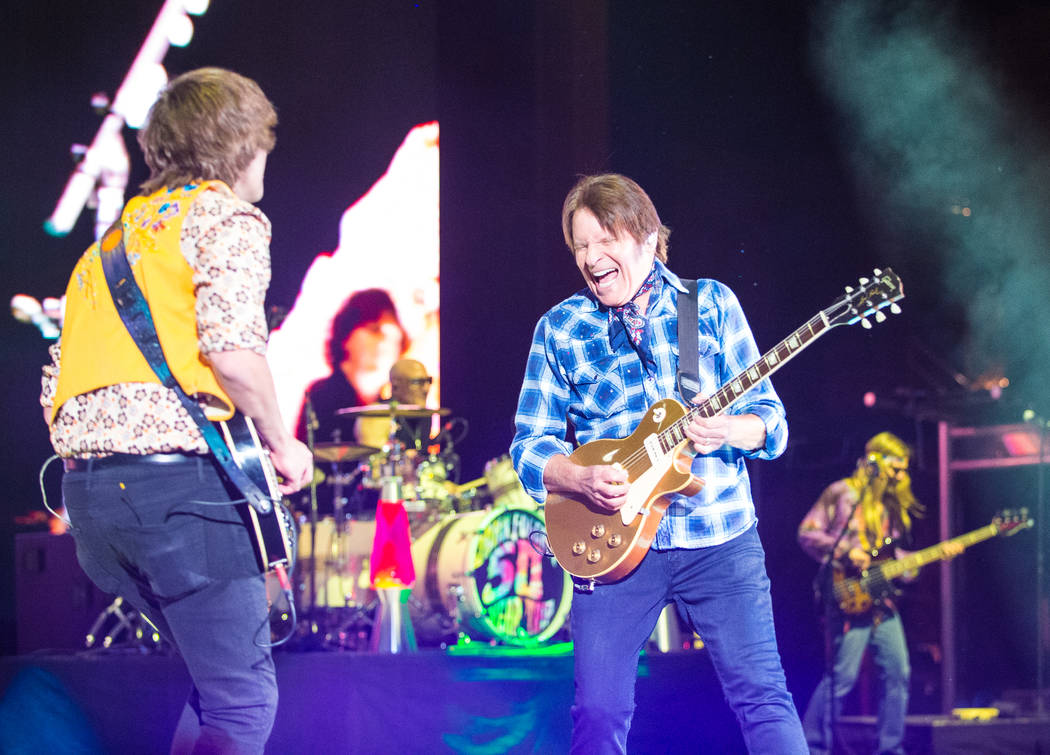 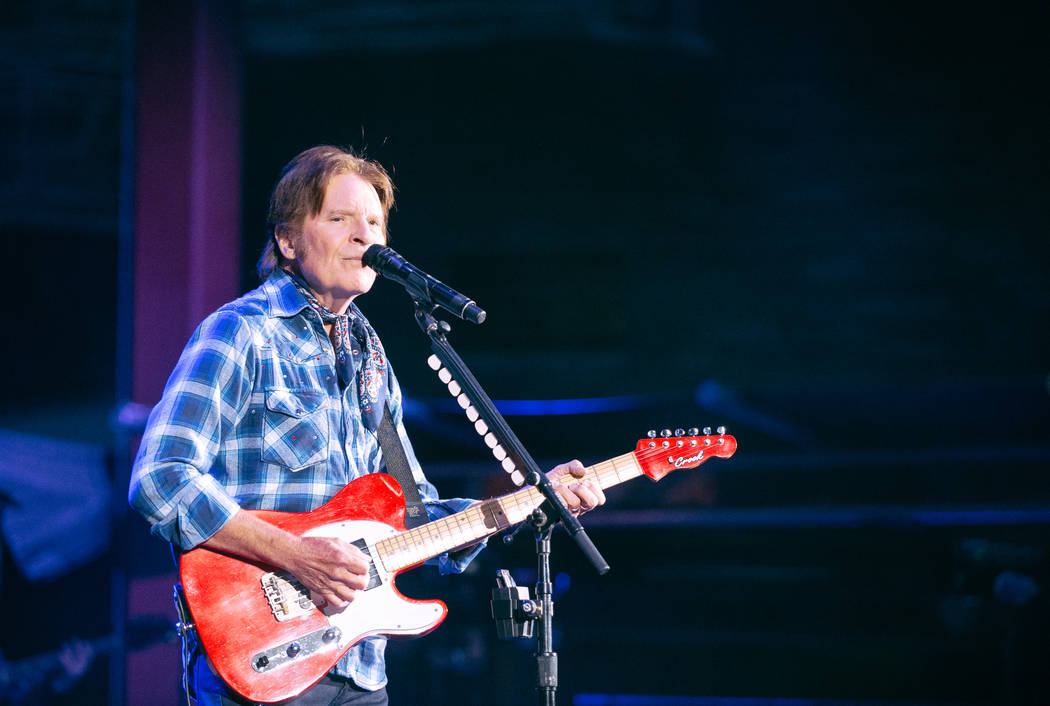 “I’m always working, trying to improve, trying to learn new tricks,” Fogerty says. “I’m trying to get a little closer to being good enough to play to my own satisfaction.”

Fogerty is back on the Las Vegas Strip with “My 50 Year Trip” rock production and Woodstock retrospective at Encore Theater at Wynn Las Vegas. Joined by his sons Shane and Tyler, Fogerty performs at 8 p.m. Wednesday, Friday and Saturday, returning Nov. 13 and 15-16.

Fogerty is inspired the music of the greats from whom he learned as a young musician — the artists range from Howlin’ Wolf (bluesman Chester Burnett), the Beatles, rockabilly icon James Burton and Jimi Hendrix.

“I grew up listening to them, that perfection, and I couldn’t help but want to be a musician,” Fogerty says. His more contemporary inspirations include such artists as guitar god Eddie Van Halen, session master Brent Mason and country superstar Brad Paisley (Fogerty’s collaborator on the 2018 single, “Love and War”).

“There are new artists I’m fascinated by, and I love Ed Sheeran,” Fogerty says. “He’s very, very talented in a lot of areas. I really appreciated great writer, great singer, makes good songs and plays them rally great and creates atmosphere on his tracks. I like it when people can do that sort of thing.”

Fogerty was among the original Woodstock alumni to play festival’s 50th anniversary on its original site at Bethel Woods Center for the Arts in New York. Woodstock alums Carlos Santana and Arlo Guthrie were also on the bill.

“The Woodstock era has become so culturally embedded that we’re kind of looking back at hippies the same way we look back at cowboys,” Fogerty says with a laugh. “We all have a picture of a guy doing the peace sign, and he’s got some kind of psychedelic clothing on. Of course, I was there, so I get to act like a pseudo-spokesman and remind people that Woodstock really happened ‘I was there! That happened to me!’”

Recalling the anniversary performance in September, Fogerty says, “It really all turned out beautifully and wonderfully — it rained, too, which was amazing.” The late-night set by Creedence Clearwater Revival at the ’69 festival was famously played to a giant mud bath.

Also, Fogerty had originally planned to play the Woodstock 50 event scheduled for Aug. 16-18 at Merriweather Post Pavilion near Washington, D.C. That event collapsed amid myriad venue and permit problems.

Fogerty was paid an advance to be added to the Woodstock 50 bill. He has donated that money to his new “Proud Mary — John Fogerty Container Home” at Veterans Village in Las Vegas. He will be on hand for a dedication of the facility, and also a screening of the new concert film, “50 Year Trip: Live at Red Rocks” with Las Vegas veterans.

Fogerty says of Veterans Village CEO Arnold Stalk, “He just sent an e-mail to someone to forward to me, and there was such magic in the letter he wrote. I read it, and thought, ‘I need to meet this guy,’ because he is amazing.”

Fogerty never anticipated turning his rock stardom into such a relevant cultural cause.

“This is what makes it fun, and exciting, for me, is making a difference, and heading toward a cause,” Fogerty says. “As you get older, God turns a few pages in the book so you have a greater understanding of what you are here for. It’s an elusive journey, but it’s worth it.”

Palms GM Jon Gray, who had provided an optimistic prognosis of Kaos Dayclub and Nightclub when Kaos Dome was announced in September, offered a “no comment” when asked for response to Kaos’ abrupt closing on Tuesday. Gray left his post Oct. 1, in what the company termed a resignation. He continues to review options in and outside Las Vegas. Gray has recently said he remains in an ongoing discussion with Station Casinos co-owners Lorenzo and Frank Fertitta III about a role somewhere in the brothers’ business interests.