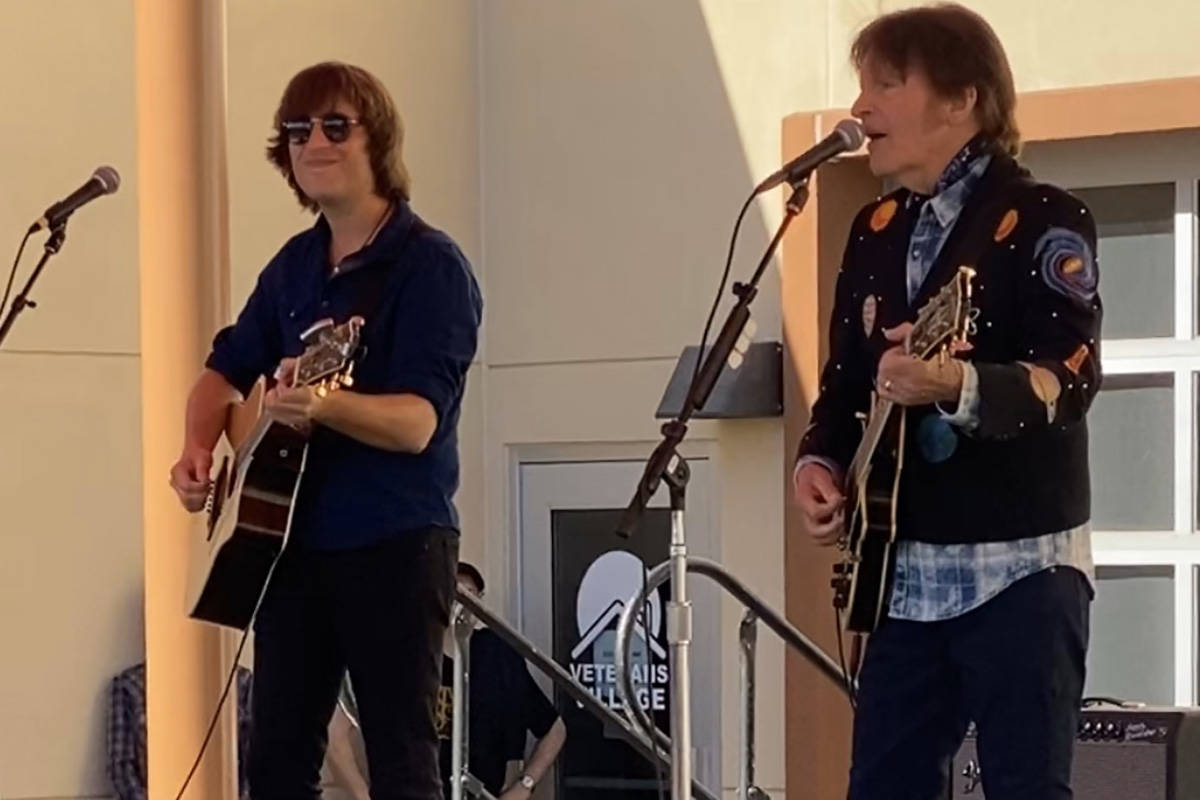 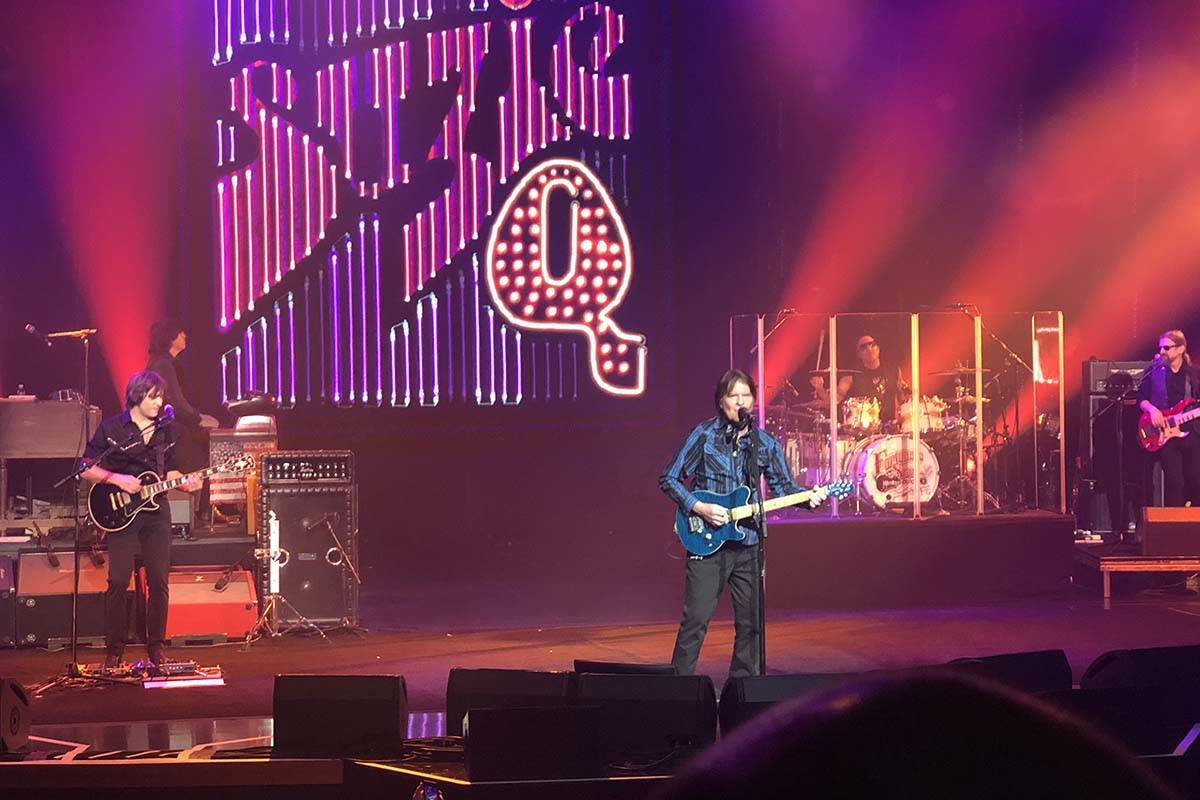 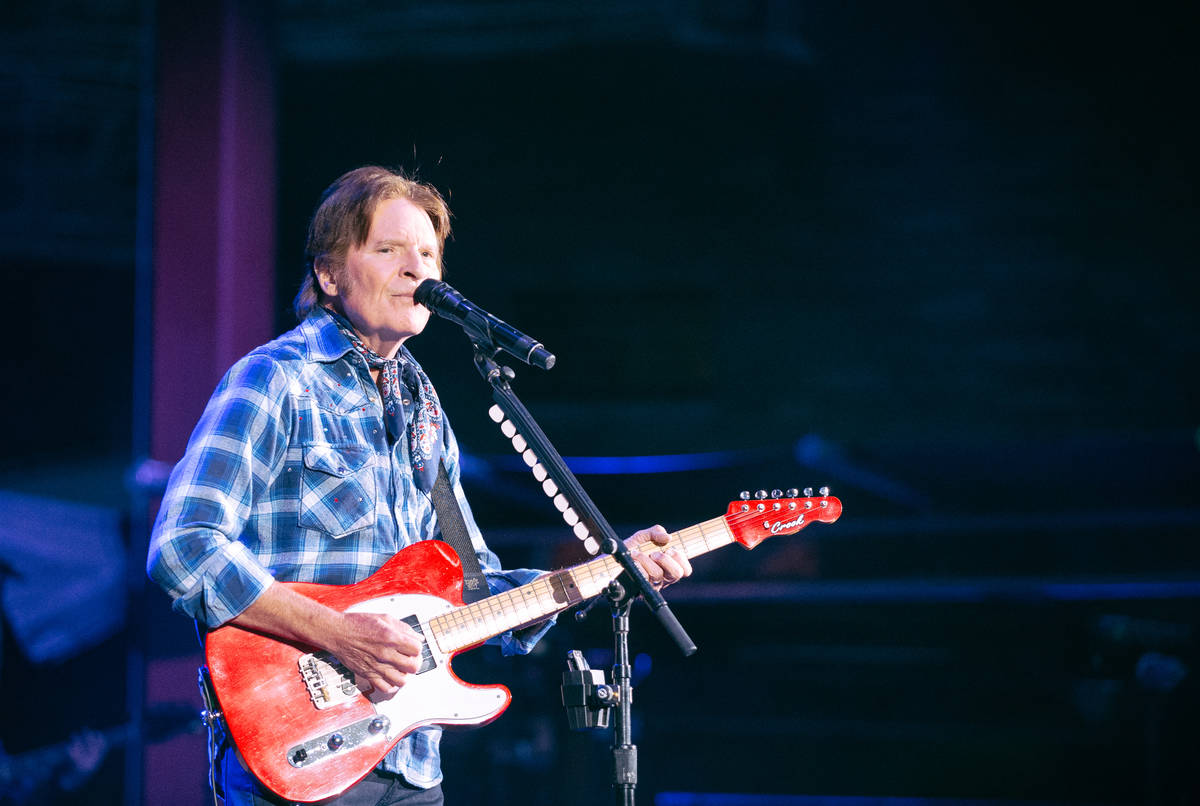 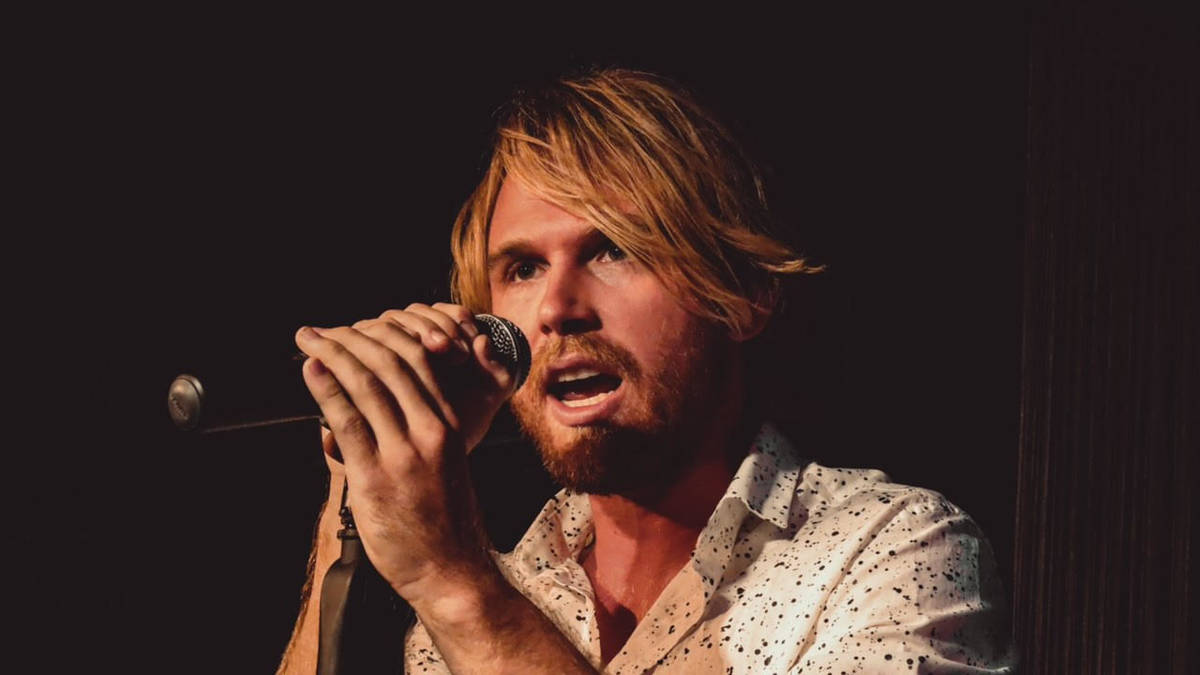 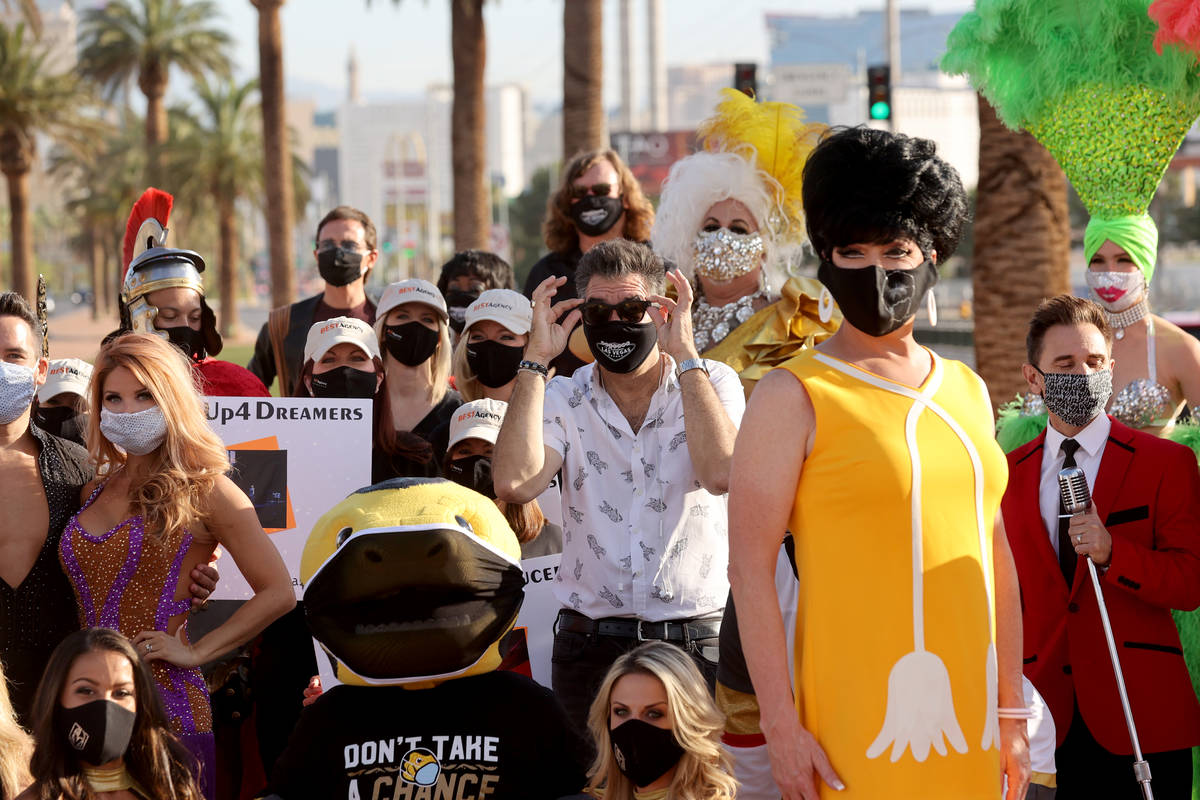 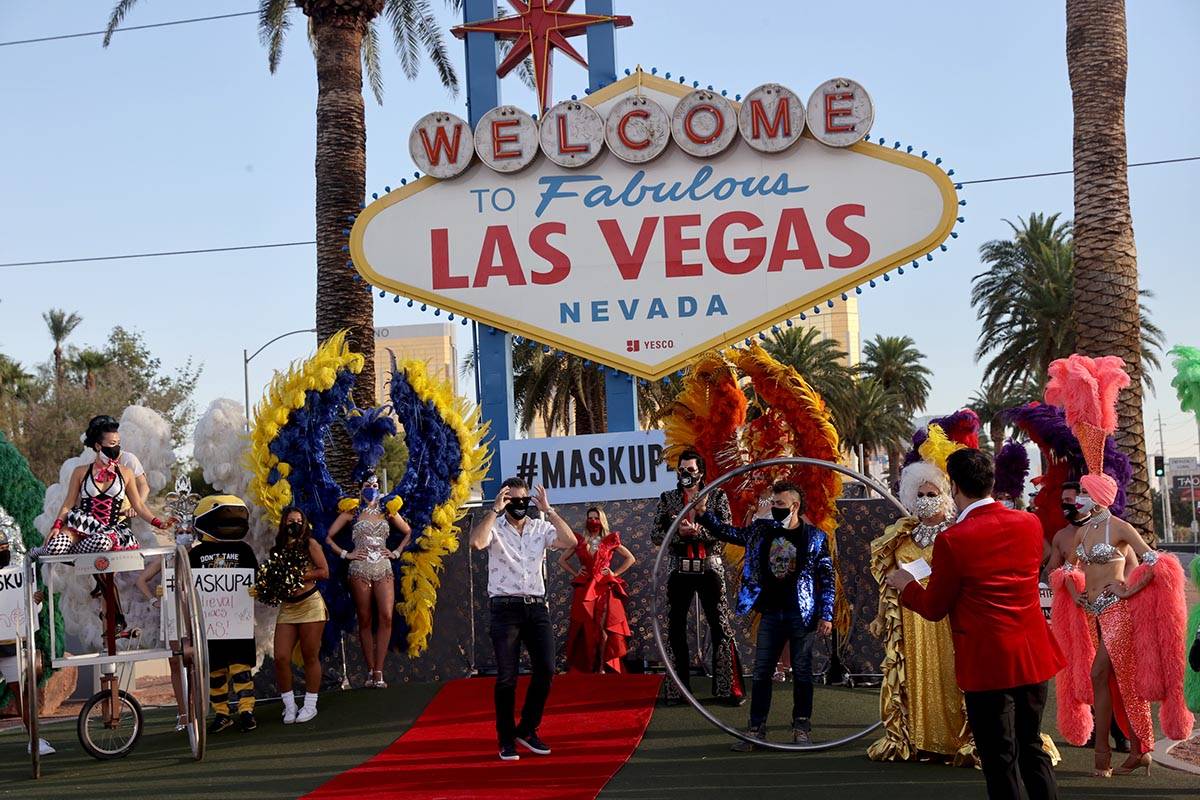 The nine November dates for “My 50 Year Trip,” Fogerty’s recurring residency at Encore Theater at Wynn Las Vegas, have been canceled. Promoter AEG Presents announced those shows, and also Jo Koy’s Sept. 4-5 dates, are officially off the books.

Fogerty’s set in November were billed as “final shows” in his residency. But AEG is hoping this is not Fogerty’s finale. As AEG Presents Senior Vice President Bobby Reynolds says, “We would love to have him back when this is all behind us, absolutely.”

Fogerty, a rock ‘n’ roll legend and founder of Creedence Clearwater Revival, has headlined intermittently at the Wynn since March 2017. His most recent shows have revived CCR’s set list from Woodstock.

The rest of Encore Theater’s schedule for 2020 has become sparse. Robbie Williams and Diana Ross canceled all of their 2020 dates. Same for comic Sebastian Maniscalco. Koy is still scheduled to return Dec. 18-20, and comic Jim Gaffigan’s has two dates on Dec. 10 on the books.

We’ve celebrated assorted benchmarks with Mat Franco during his time at Linq Hotel. He’s opened in grand fashion and held a party for the renaming of Mat Franco Theater. Wednesday, Franco’s show reached its fifth anniversary at the hotel. He simply posted a photo of a cake decorated with a 5 of hearts. That’ll work, for now.

The 2014 Season 9 “America’s Got Talent” champion most recently launched the “Mind Over Magic” podcast with his friend and mind-reader Eric Dittelman. He, too, is an “AGT” alum, reaching the top 10 of Season 7 in 2012.

“Eric and I worked the college market about 10 years ago, and went farther than any magician on his season and convinced me to to it, too,” Franco says. “We get some insight as to what’s going on in our personal lives and our professional lives.”

Franco continues to appear in promotional spots for “AGT” in montage of former champs who have gone on to headline in Las Vegas. He’s watching the current season with great interest, as Las Vegas-based artists Brett Loudermilk, Alan Silva, Johnathan Goodwin and Max Major have survived Judges’ Cuts. The show resumes Tuesday night with the live quarterfinals.

“I’m very anxious to see what happens in the live shows,” Franco says. “‘The Voice’ and ‘American Idol’ have been going completely remotely, with contestants performing from their homes or wherever they happen to be. This is live, for the judges, in-person but with no audience. I can’t think of another example of a show that is doing that.”

Franco says he’s still working on new acts for his show, with most of the material about 75-percent ready. “I’ve got a lot of new stuff in the works,” he says. “It’s just a matter of putting it in front of an audience to see how it feels.”

We got a cover-up

The #MaskUpNV campaign is hitting the siren, as it were, next Wednesday with a series of 13 pop-up shows at Southern Nevada medical centers. Organizers Greg Chase, founder of Experience Strategies and a former MGM Resorts International executive; and Douglas Johnson, president of entertainment Plus Productions; are advancing the campaign with a daylong series of quickie performances.

Showgirls, singers, impressionists and costumed characters are taking part while wearing masks to encourage the community to cover up during COVID. I was honored to mask up during the launch of the campaign June 25 at the Welcome To Fabulous Las Vegas sign.

Since, Chase and Johnson have gone national, producing a similar #MaskUpForUSA event in Nashville. Carole Baskin of “Tiger King” fame contributed a video for that effort. The campaign really is universal.

Ian Ward is up next at a new favorite haunt, The Vegas Room in Commercial Center (remember, the red doors, not the green). Ward and longtime Vegas artist Chris Lash are set at 6:30 p.m. dinner, 8 p.m. show, on Friday and Saturday. Keeping with the format, the cost is for dinner and the show complementary, go to thevegasroom.com for info.

As the first actual rocker to play the room, Ward will summon The Beatles, Elton John, Foreigner, Kansas and Kenny Loggins, among others. Ward portrayed the final Romeo in “Baz” at Palazzo Theater, and was also in the L.A. cast of “Rock Of Ages,” pre-shutdown.

The Vegas Room has become a live-entertainment and culinary highlight, with Chef David James Robinson continually adjusting and updating his five-course menu. Skye Dee Miles is back for her “The Blackbird Sings” brunch performance on 1 p.m. Miles soared in her debut over the weekend, mixing “Blackbird” with a spirited arrangement of Gloria Gaynor’s “I Will Survive.”

Miles is backed by the terrific pianist Blaine McGurty, is the sort of musician you watch and ask, “Where has this guy been?” Specifically, McGurty backed Miles at Rose. Rabbit. Lie. at the Cosmopolitan for six years. He’s just moved over to Mayfair Supper Club at Bellagio.

Down the line it’s Janien Valentine on Aug. 14-15; Jimmy Hopper on Aug. 21-22. Both are world-class entertainers, and have carved out busy careers in town.

This is what you uncover at The Vegas Room. I admit I’d not been into the Commercial Center in several months before the venue re-launched in June, during the city’s phase two COVID reopening. This is a safe “listening room,” as accurately described by entertainment director Brent Barrett — who has also performed in the space. That means forks down, masks up and eyes on the stage.

Massively talented Vegas artist Daniel Park has joined several musicians and vocalists across the country in a cover of Foo Fighters BBC video “Times Like These” by Foo Fighters. The resulting effort is linked to a GoFundMe page dubbed Donate 12, encouraging supporters to donate $1 for each artist contributing to the project.

Park is a highly regarded vocalist and violinist who uses loops with the same effort as Ed Sheeran. He appeared on season 7 of “America’s Got Talent” and had played The Sayers Club at SLS/Sahara, Lily Bar at Bellagio, the former Mandarin Bar at Mandarin Oriental (now Waldorf Astoria) and Red Rock Resort.

Kevin Vosanek of Las Vegas is on piano and arranged and produced the piece. Adam Thurgood, on on vocals and enacted the audio engineering; and local singer Anisa Beckett is also on vocals.

A series of health-care workers also featured, too. Great effort, and worth our support.

We’ve been biking it up during the COVID era, with evidence in rides with Wayne Newton and Billy F. Gibbons, and also on my Instagram and Twitter feeds. I’m not alone. Bicyclists have created such a demand downtown that the Regional Transportation Commission of Southern Nevada (RTC) has added six electric, pedal-assist bikes to the RTC Bike Share program.

According to a release, the COVID-19 shutdown caused RTC bike ridership to increase 297 percent over the same period last year. The program experienced its most check-outs ever, averaging more than 1,000 rides per day in May.

The agency also reports that customers check out e-bikes 2.5-percent more often that regular bikes. But not this cyclist. My evolution started on RTC non-electrics, followed by a Specialized street bike, and then a Trek mountain bike that I also ride on the street.

The RTC program can lead to a change in lifestyle, and a change in your credit-card debt. But well worth it.