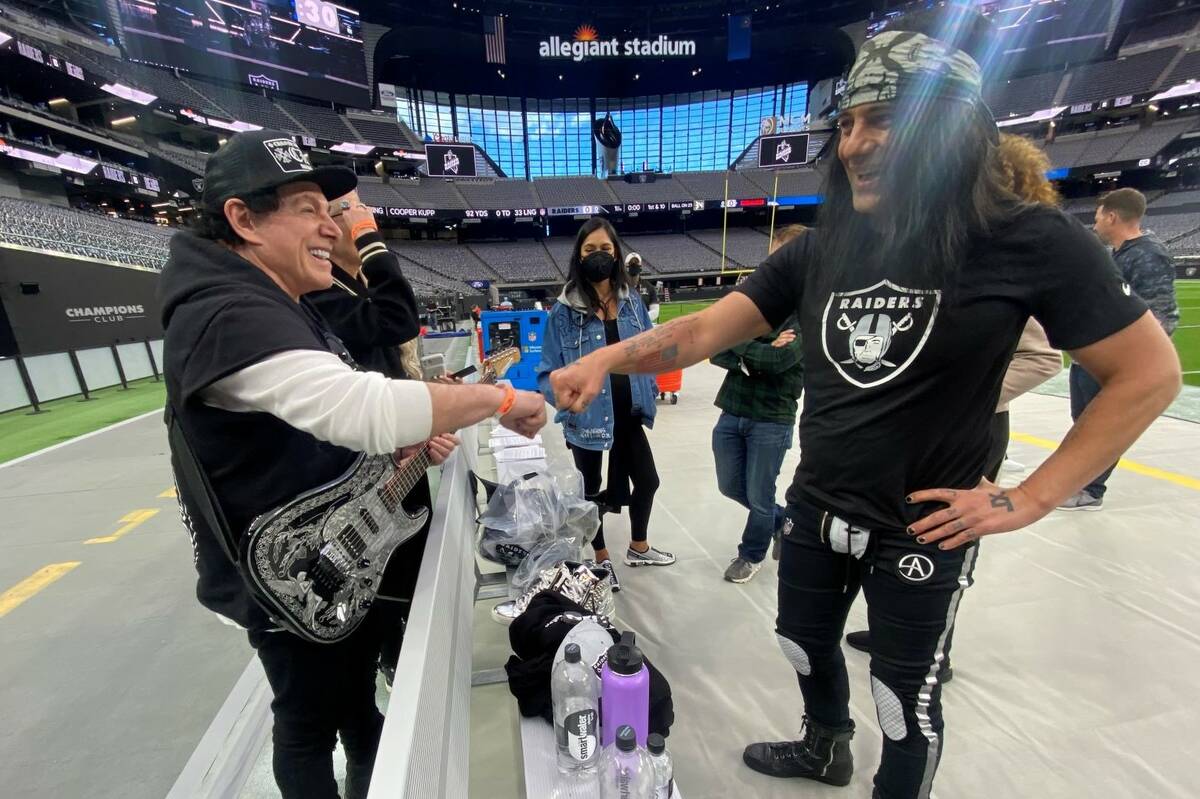 Neal Schon and Criss Angel greet each other during rehearsals Saturday at Allegiant Stadium for their Sunday performances at the Raiders-Bears game. (John Katsilometes/Las Vegas Review-Journal) @JohnnyKats 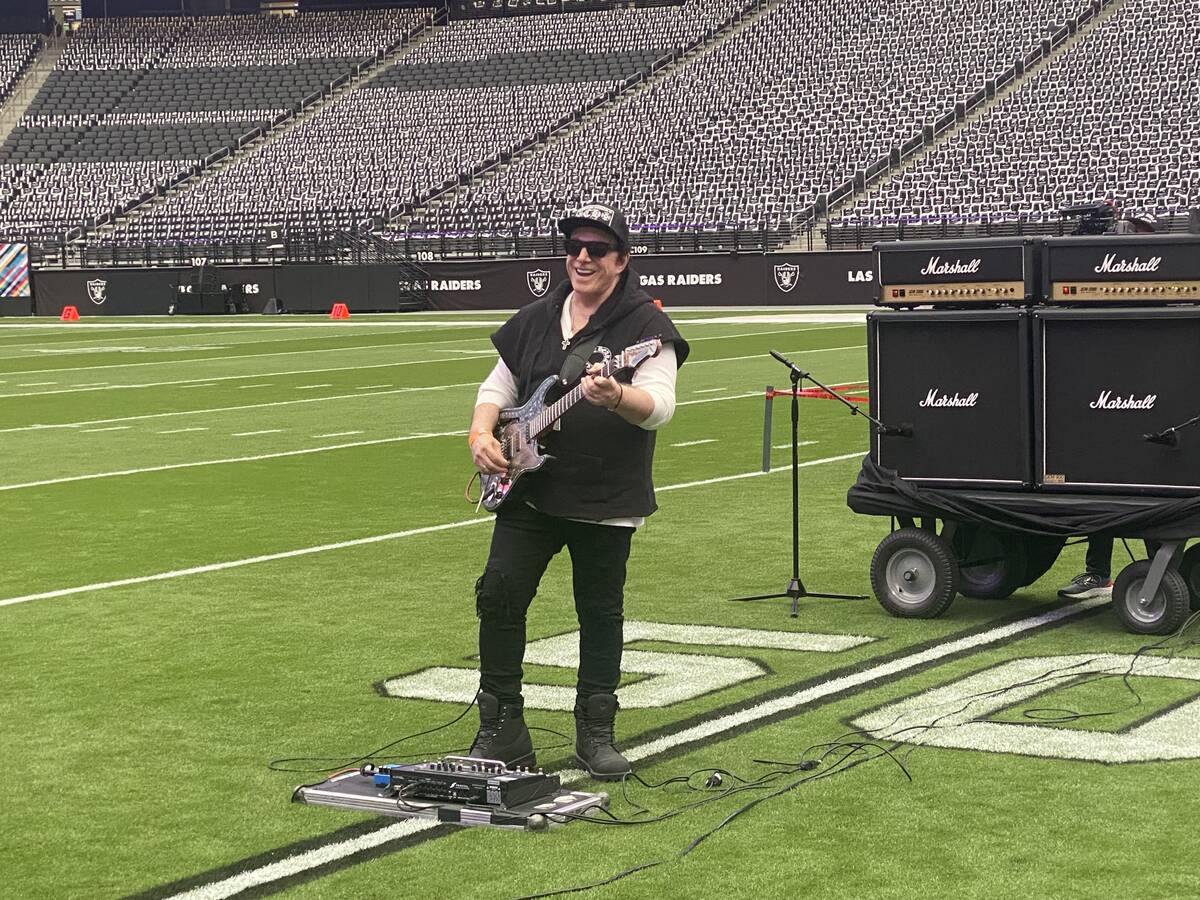 Neal Schon plays during a rehearsal Saturday at Allegiant Stadium for his Sunday performances at the Raiders-Bears game. (John Katsilometes/Las Vegas Review-Journal) @JohnnyKats

Neal Schon is playing Allegiant Stadium for the first time on Saturday.

“I want to play here (laughs), longer than just the national anthem,” Schon said, standing near midfield and the Las Vegas Raiders logo. He’d just run through a version (well, several) of “The Star Spangled Banner.” The guitar legend and co-founder of Journey is playing it before Sunday’s Raiders-Bears game.

Saturday was Schon’s first visit to Allegiant Stadium. He and his wife, Michaele, were driven directly to the stadium after taking a direct flight from San Francisco to Las Vegas on Saturday morning. This was a late-arriving gig. The team contacted Schon on Thursday about possibly playing the anthem this weekend.

“I think we will get back here,” Schon said. “We’re already talking about a Super Bowl, in 2024. I said, man, if you want a San Francisco show, I can put one together for ya. Santana, Journey, Toto, Tower of Power, Metallica.”

Not to get too far ahead of the schedule here. But Schon did call his friend and former bandmate Carlos Santana on his way to the stadium.

“I was just talking to Carlos, and he’s excited about this,” Schon said. Santana has played the halftime show at the Raiders-Seahawks preseason game as he arrived on the field to rehearse the national anthem. “He said, ‘Yeah, I have been there. Make sure you do this and do that, but have fun.’ ”

Schon met magician headliner Criss Angel, who rehearsed a pre-game stunt he’s performing before kickoff (be seated in the stadium by noon to see one of Angel’s biggest routines). The act is on behalf of “Crucial Catch: Intercept Cancer” program to support the American Cancer Society’s early detection and risk reduction across an array of cancers. Angel’s son Johnny Crisstopher was diagnosed with leukemia in 2015 when he was 20 months old.

Angel told Schon he’d been a Journey fan since he was a kid, then reeled off a series of classic titles. “I’m 53 and I grew up with Journey,” Angel said. “ ‘Wheel in the Sky,’ ‘Separate Ways,’ ‘Lights,’ ‘Faithfully.’ I’ve listened to you on vinyl and you are in my phone right now.”

Schon told Angel he was inspired by his stadium stunt (being kept a secret from fans who want to watch it Sunday), saying, “I’m doing it next!”

Ludacris in the mix

Ludacris is playing halftime, joining rap stars Too Short and Ice Cube who have played during the break in the action. The rapper/actor played Drai’s at Cromwell on Friday night.

Schon is playing a righteous, silver-and-black Stratocaster custom-made by luthier Naoki Ihashi. It’s called “Lady M,” for Michaele Schon. The guitarist says he rarely plays the instrument, which features a hand-cut aluminum face and an angel in Michaele’s image.

Journey plays six dates in December at The Theater at Virgin Hotels from Dec. 1-11, and also a single performance Dec. 18 at the Colosseum at Caesars Palace. They are not the same show. Schon said Saturday that the band is playing with an orchestra at the Colosseum.

The recording artist Jewel and her mental-health nonprofit, The Inspiring Children Foundation, has announced their partnership with The Wellness Experience by Kroger for its 2nd Annual World Mental Health Day Summit and Concert. The summit is 2 p.m. Sunday, followed by the concert at 4 p.m., at the WorldMentalHealthDaySummit.com.

From a news release, “The event’s goal is to democratize wellness by bringing physical, emotional, and mental health to the masses in a fun, creative way, infused with music, celebrity and experts.”

Jewel co-hosts and is flying to Las Vegas from Nashville to watch the concert and summit with youth at the Foundation’s Lorenzi Park headquarters. She will also perform, along with Music Performances include Alejandro Sanz, Nicky Jam, Quinn XCII, CG5, Lydia Knight, Hunter Hayes, and Pat Monahan.

Paris Hilton and Carter Reum checked out Area15 on Friday, and Zouk Nightclub on Friday and Saturday, during the couple’s dual Vegas bachelorette-bachelor party. Hilton posted shots of herself dancing with Tiesto in the DJ booth at Zouk (great footage of the party cannons). The group checked out Area15 attractions Oddwood, Wink World and Museum Fiasco, and the couple rode Haley’s Comet zip line. They missed the new “Rated Red” burlesque show at The Portal, which debuted Friday night and is wild fun. Look for coverage of that show in an upcoming column.