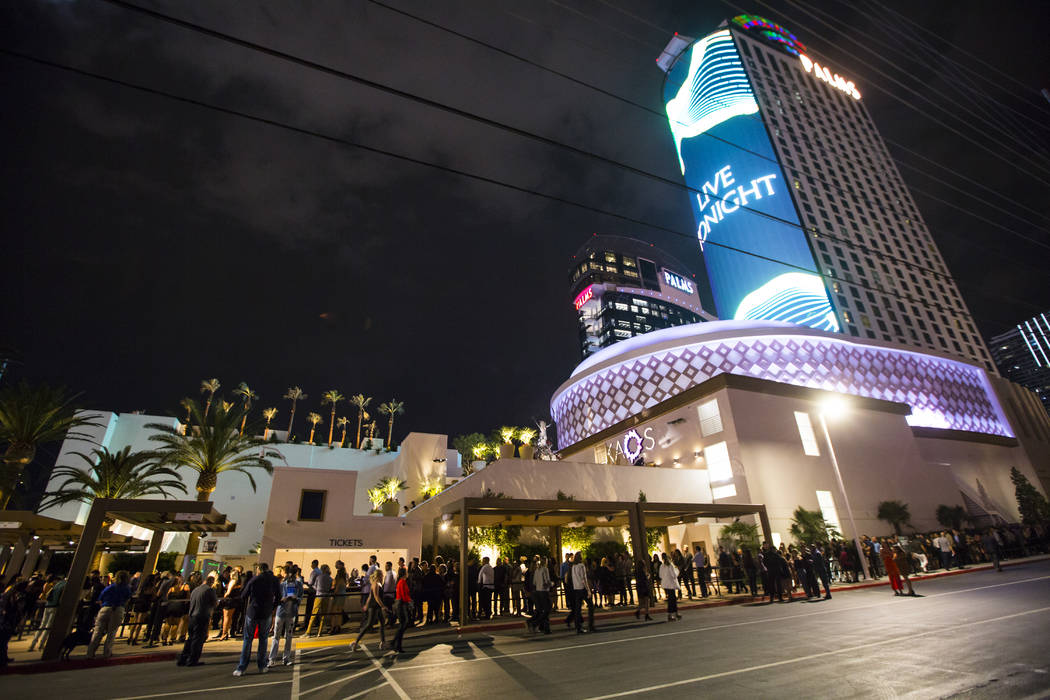 Attendees line up outside of the Palms during the grand opening weekend of Kaos, the new dayclub and nightclub, in Las Vegas on Friday, April 5, 2019. (Chase Stevens/Las Vegas Review-Journal) @csstevensphoto 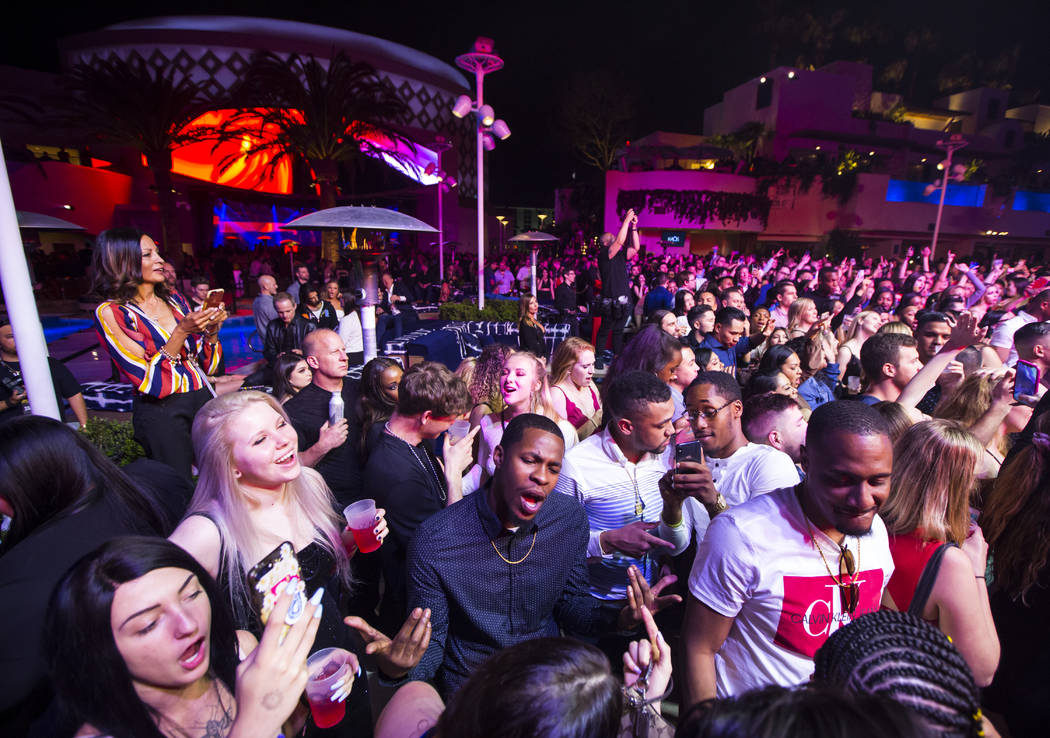 Attendees dance and listen to music as performers entertain by the outdoor stage during the grand opening weekend of Kaos, the new dayclub and nightclub at the Palms, in Las Vegas on Friday, April 5, 2019. (Chase Stevens/Las Vegas Review-Journal) @csstevensphoto

What’s that saying about the bigger they are, the harder they fall? That is the simple message coming out of the Palms days after it closed its massive party complex.

Kaos nightclub and day club closed because it shot too high and fell too short. The Palms club’s ambition was as naked as the 60-foot-tall “Demon with Bowl” statue looming over the pool area, the work of British conceptual artist Damien Hirst. Even the newly installed Kaos dome couldn’t stave off the financial dousing.

Kaos’ closure was announced Tuesday by Palms parent company Red Rock Resorts. The cornerstone of the company’s $690 million overhaul, Kaos was an indoor-outdoor annex designed specifically as a multifaceted haven for top DJs and hip-hop artists.

The party ended just seven months after a wild opening weekend in April. In an earnings call, company co-owner Frank Fertitta III cited heavy expenses related to the high cost of opening and running a megaclub and paying its headliners — especially DJ Marshmello and hip-hop star Cardi B — as reasons for closing the venue.

The club’s failure to reach lofty expectations has been viewed as the tide turning back on the construction and operation of mega-nightlife culture.

Certainly, no Las Vegas resort is going to have the intestinal fortitude to construct a club of 70,000 square feet, laden with 40 cabanas, several small pools and a $14 million art piece (the aforementioned “Demon” statue). No responsible operator would be willing to pay a DJ $60 million over two years, or $600,000 per show, even if that individual wore a flashy, LED-equipped bucket on his head.

But some industry insiders have said they think Vegas’ draw as a party city means there will always be demand for new, flashy dance floors. Several projects currently under construction include plans for elaborate venues. Resorts World Las Vegas, for example, reportedly has plans for a lavish nightclub and day club when it opens in late 2020.

Connecting the dots (or synchronizing the party cannons), Resorts World owners Genting Berhad operates Zouk nightclub in Singapore, and stages the annual ZoukOut EDM festival that has been headlined by (wait for it) Marshmello, Tiesto, David Guetta, Zedd and Martin Garrix. All of them are currently, or have been, headliners in major Vegas resorts.

Also, Resorts World President and COO Scott Sibella has experience in dealing with nightlife companies. He was president at MGM Grand when Hakkasan Nightclub opened in 2013.

The Drew, too, is planning an extensive nightclub under the stewardship of Bobby Baldwin, who helped forge a relationship with Hakkasan Group when he was president and CEO at CityCenter (Baldwin was on board when Jewel Nightclub opened at Aria).

And, lest we forget a property that helped launch the current era of megaclubs in the mid-1990s with Club Rio: Incoming Rio owners Imperial Companies of New York is reportedly planning its own aggressive nightlife venue to begin construction when that company’s two-year, lease-back deal with Caesars Entertainment times out. Imperial co-founder Michael Fascitelli, part-owner of the Milwaukee Bucks of the NBA, is expected to do a complete renovation of the Rio beginning in 2021.

The Rio has fallen on creaky times over the past decade, but still has ample space in its pool area, casino floor and rooftop (where VooDoo Lounge and VooDoo Steak are located) for a new club concept. The drawback is Rio’s off-Strip location — which also dogged the Palms — which is almost entirely devoid of walk-in traffic that would party at a nightclub.

There are no plans for Virgin Hotels Las Vegas to open a megaclub when it re-opens in late-2020. Hotel President and CEO Richard Bosworth says, “A big club is not in our business model.” The former Body English/Magic Mike Live club is likely to host a production show, and smaller nightlife venues are being planned.

As a counter to massive nightclub development, comparatively intimate nightspots have gained popularity on and off the Strip. Among them: The new Mayfair Supper Club at Bellagio (in the former Hyde Nightclub space); On The Record, Mama Rabbit and NoMad Bar and Restaurant at Park MGM; Rose. Rabbit. Lie, Clique, Beauty & Essex and Block 16 at The Cosmopolitan of Las Vegas; The Dorsey and Rosina at Venetian/Palazzo; Vista at Caesars Palace; and Apex, continuing its operations at the Palms.

All still satisfy the thirst for Vegas nightlife, without guests feeling they’ve been assaulted by strobes.

As for Kaos, there are lessons to be learned all across the club.

The cluster of executives originally brought in by the Palms, including the nightlife twin tandem of Cy and Jesse Waits, and Clique Hospitality officials Ronn Nicolli and Ryan M. Craig left the hotel, leaving the nightlife operations in the hands of the hotel itself. The Palms’ efforts — successful in many cases — to snare top nightlife execs from Wynn Nightlife led to an open feud between the two resorts.

And that Marshmello contract continues to be a thorny issue. According to well-placed industry officials, the masked DJ pulled in twice as much, per show, as Cardi B. The hotel would have needed to rake in $1 million in revenue per appearance just to cover his $600,000 fee and other operating costs.

As it was, “Mello,” as he is known, did clear that hurdle during the daytime, when between 6,000-8,000 partiers spent several hours on the pool deck, only to give it back for shorter sets at night.

And Cardi B, a lightning rod for attention, was prone to showing up at 3 a.m. to perform for 20 minutes. It’s probably fitting. In the end, a Kaos was only good for a hot minute.