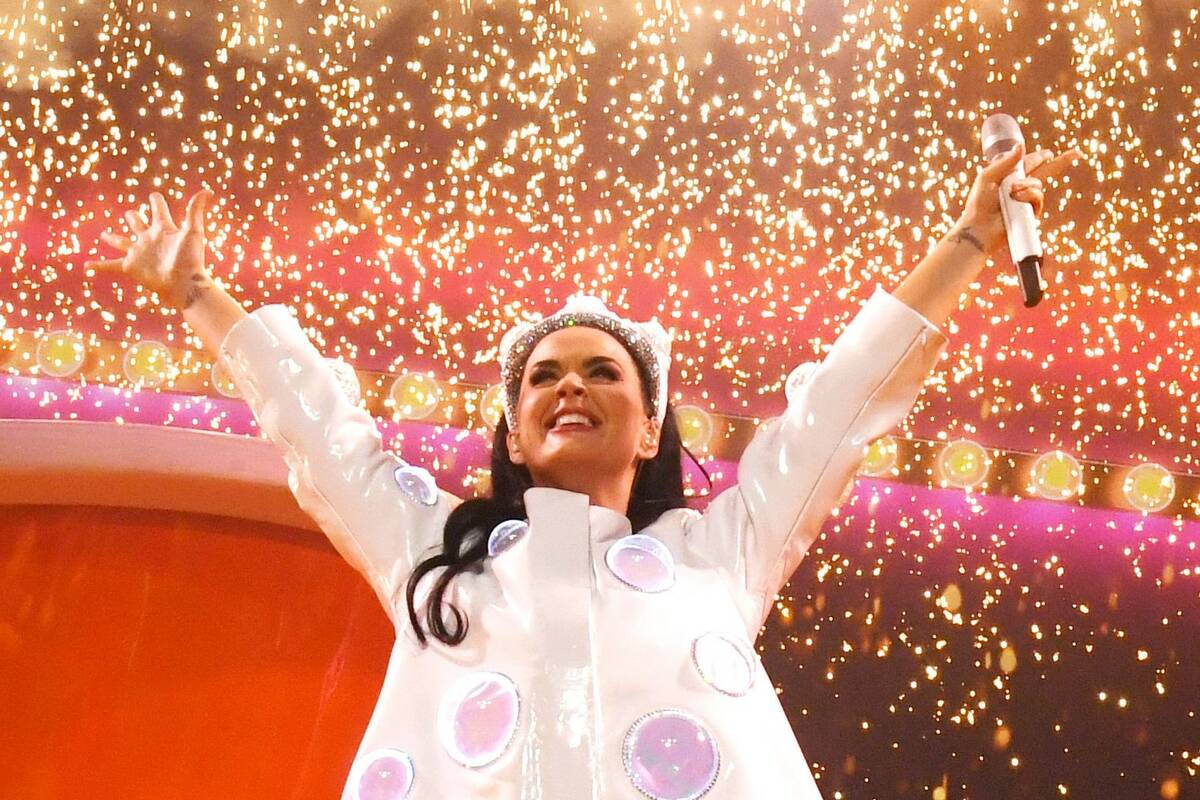 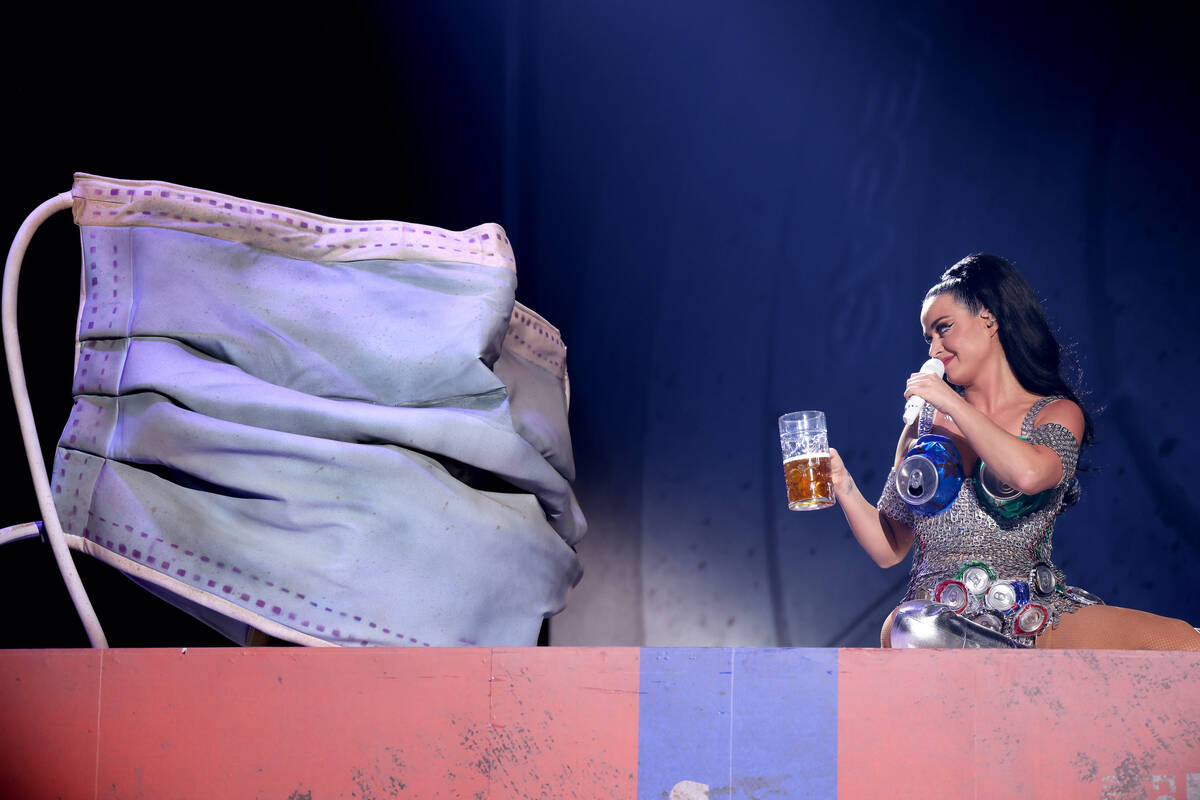 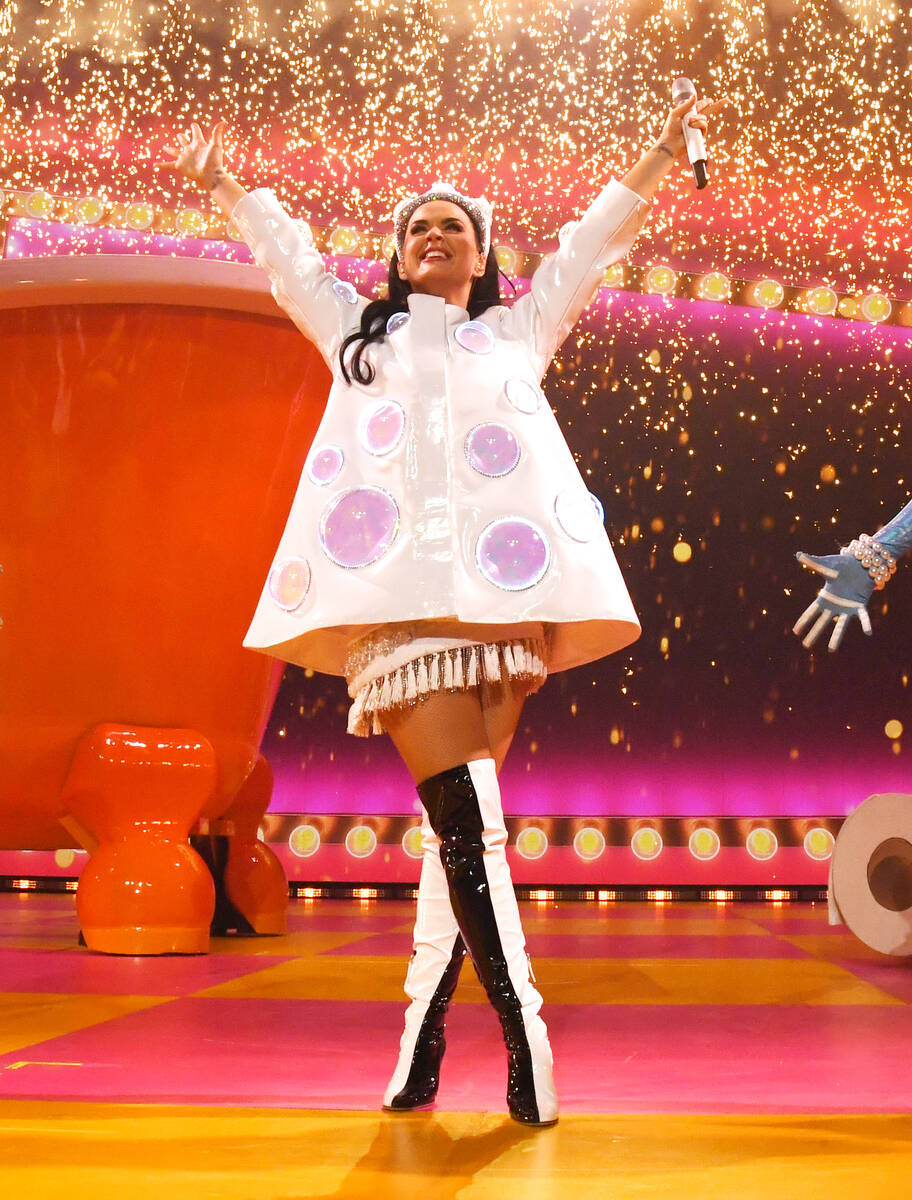 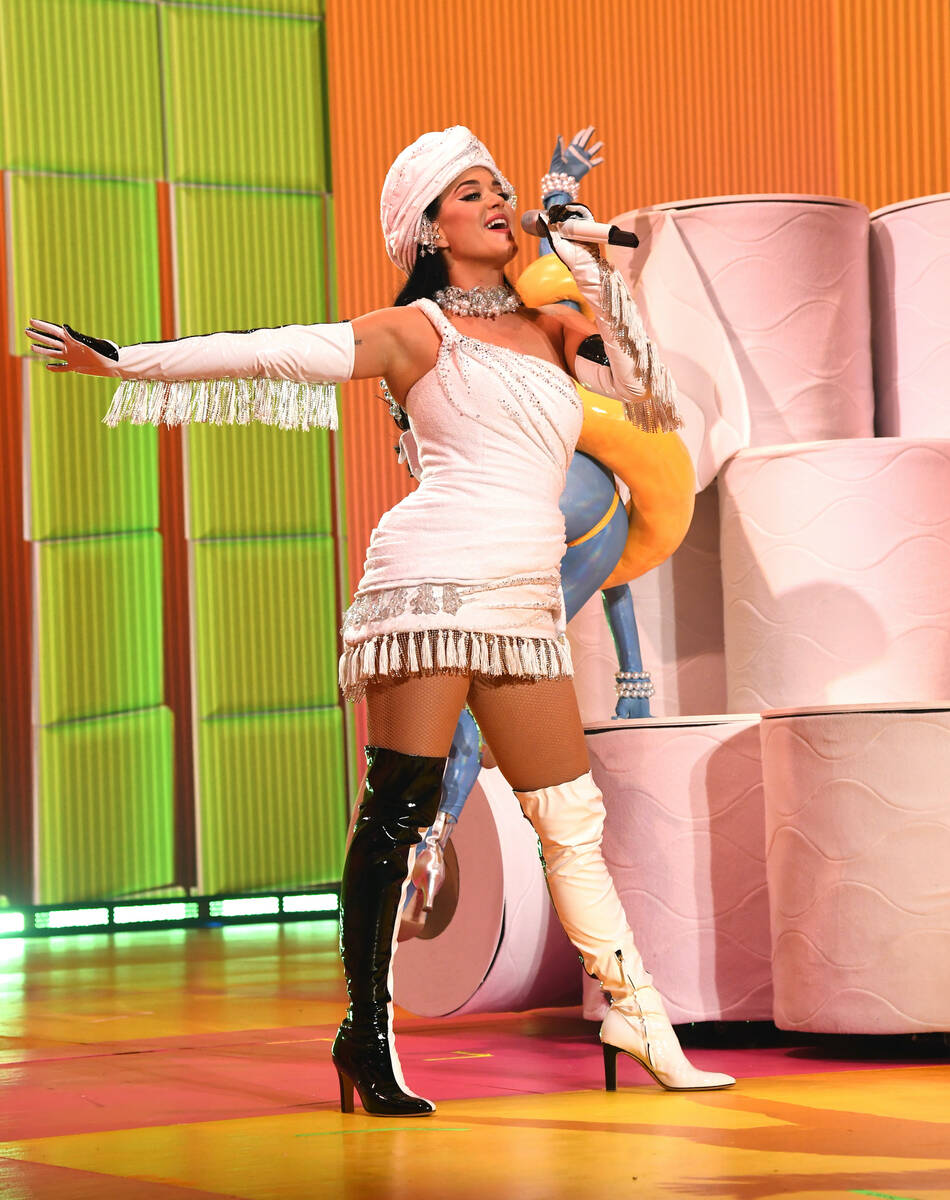 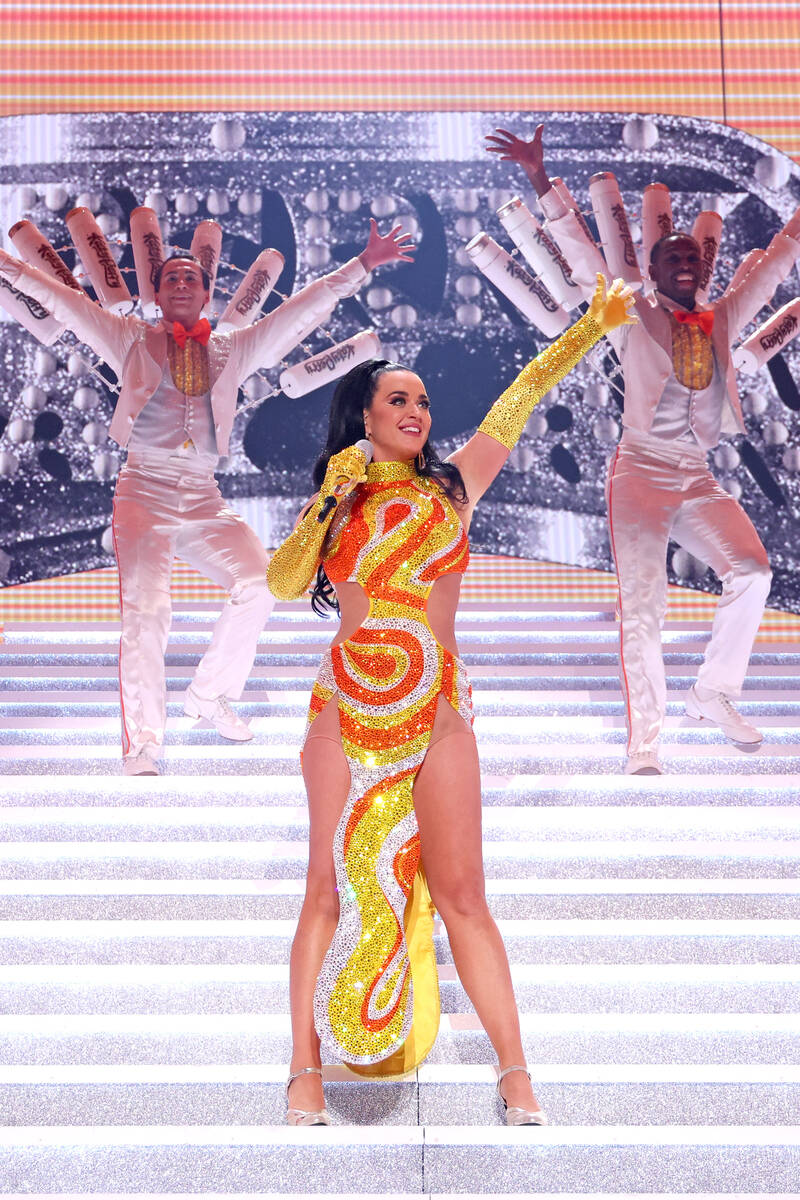 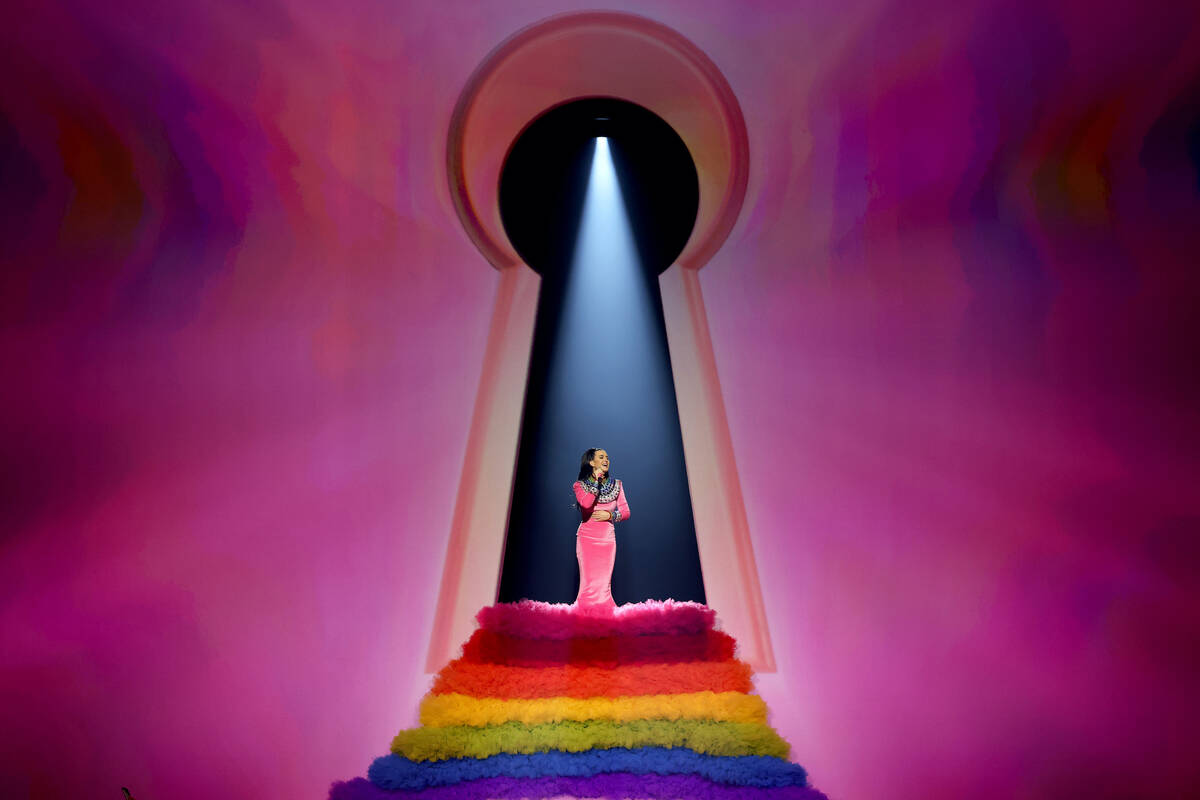 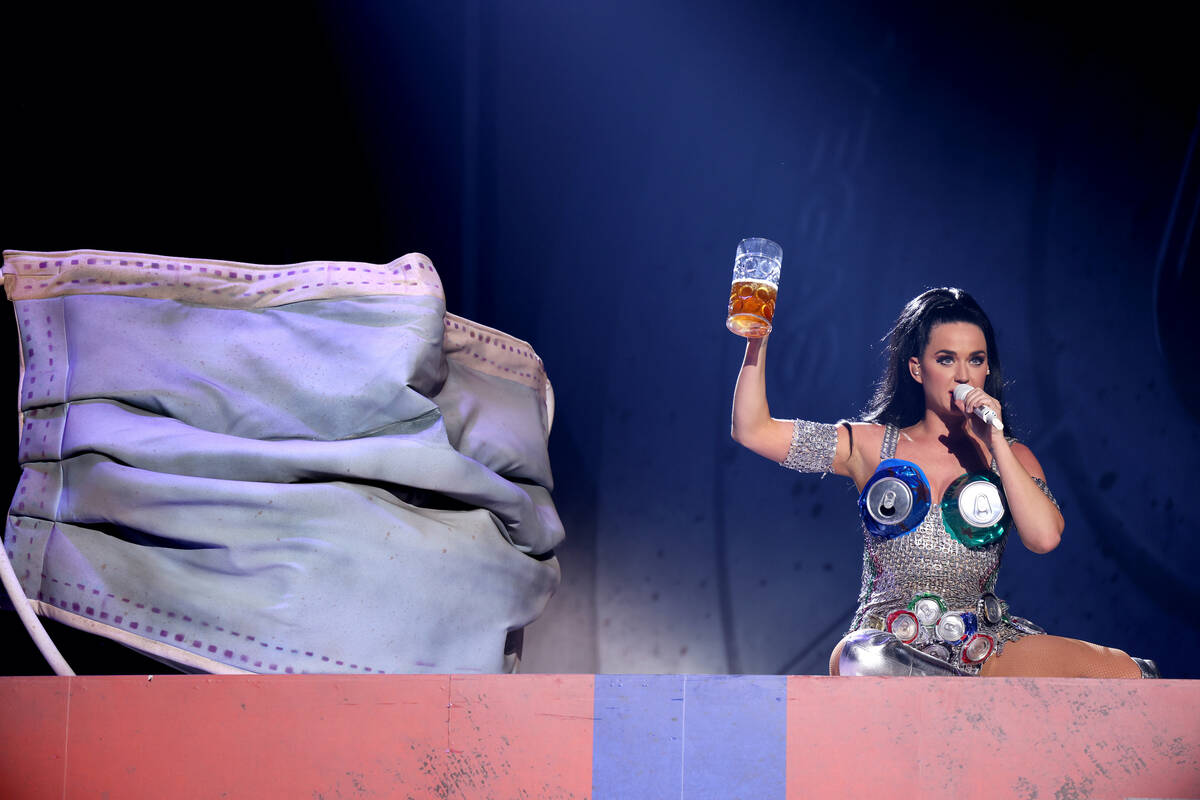 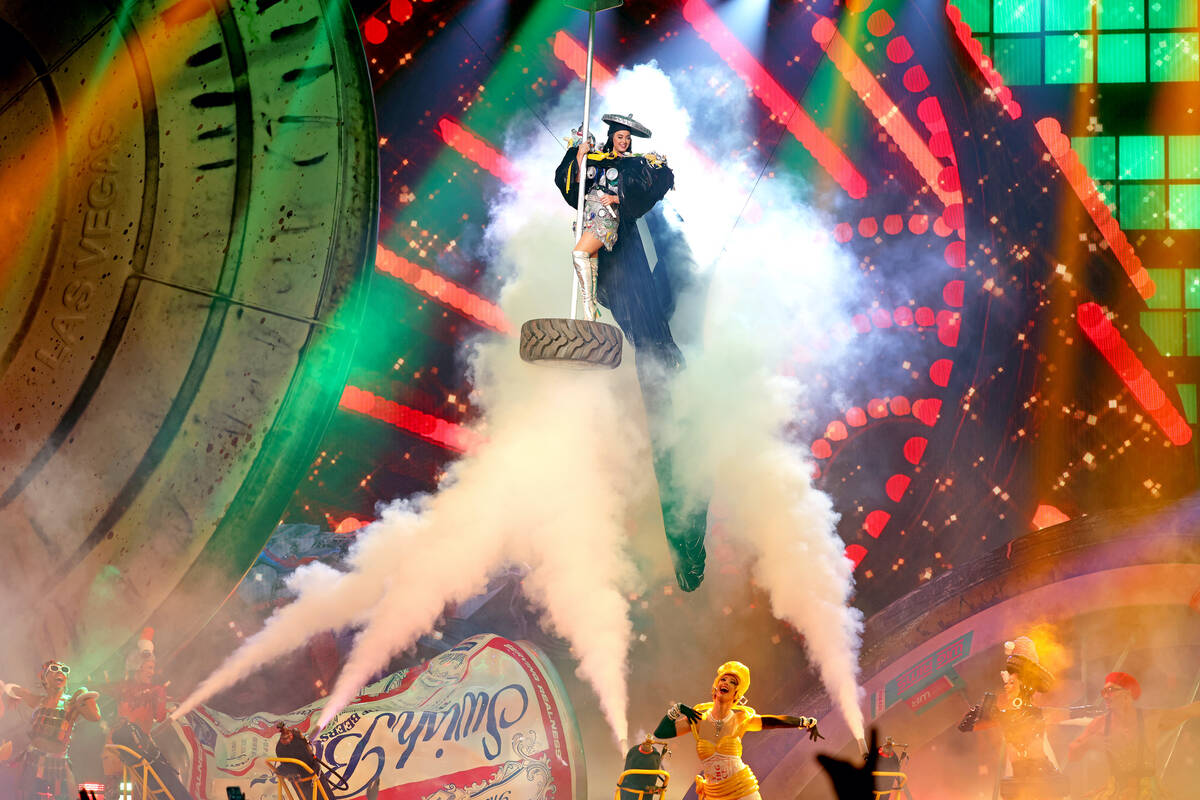 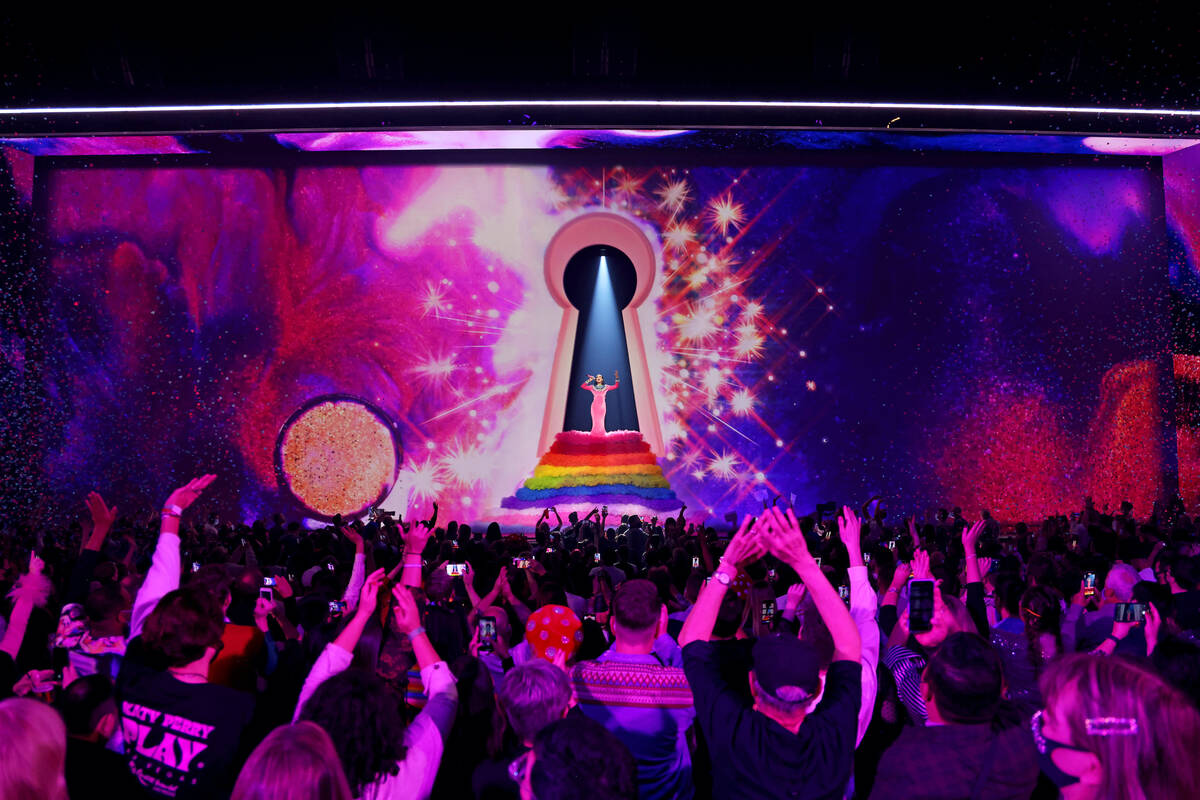 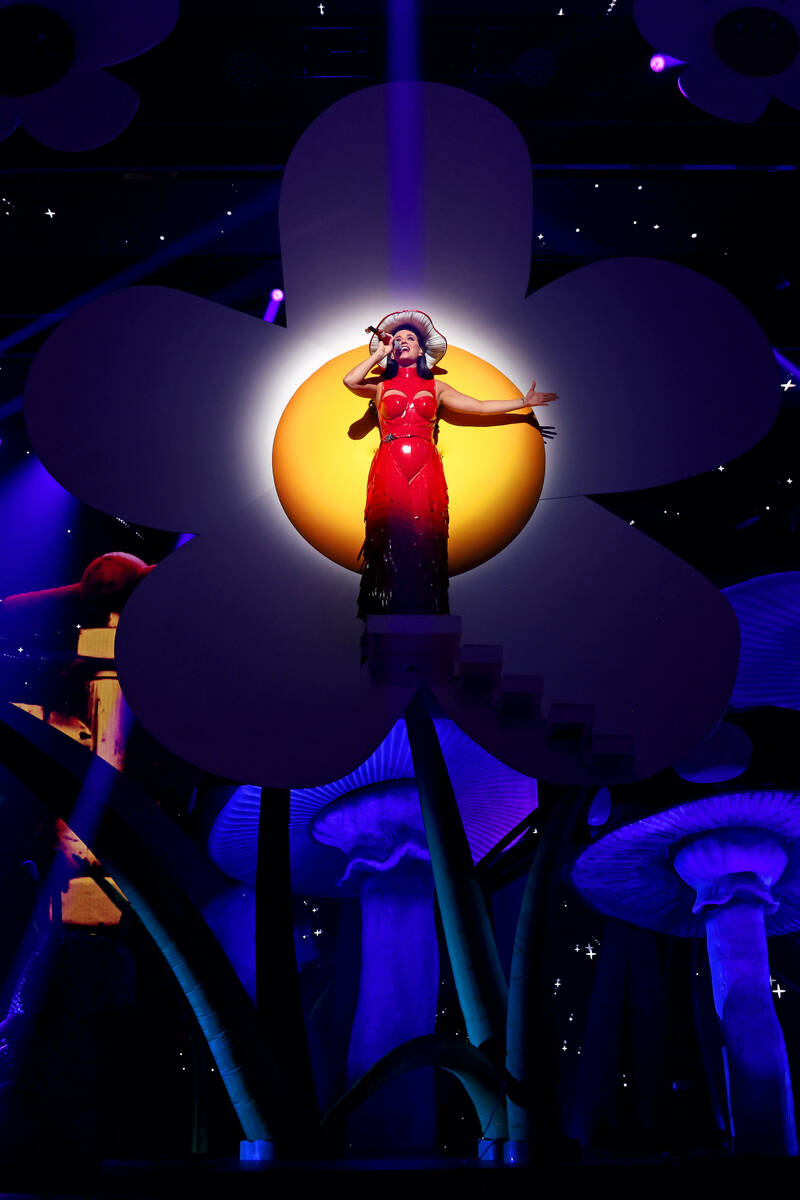 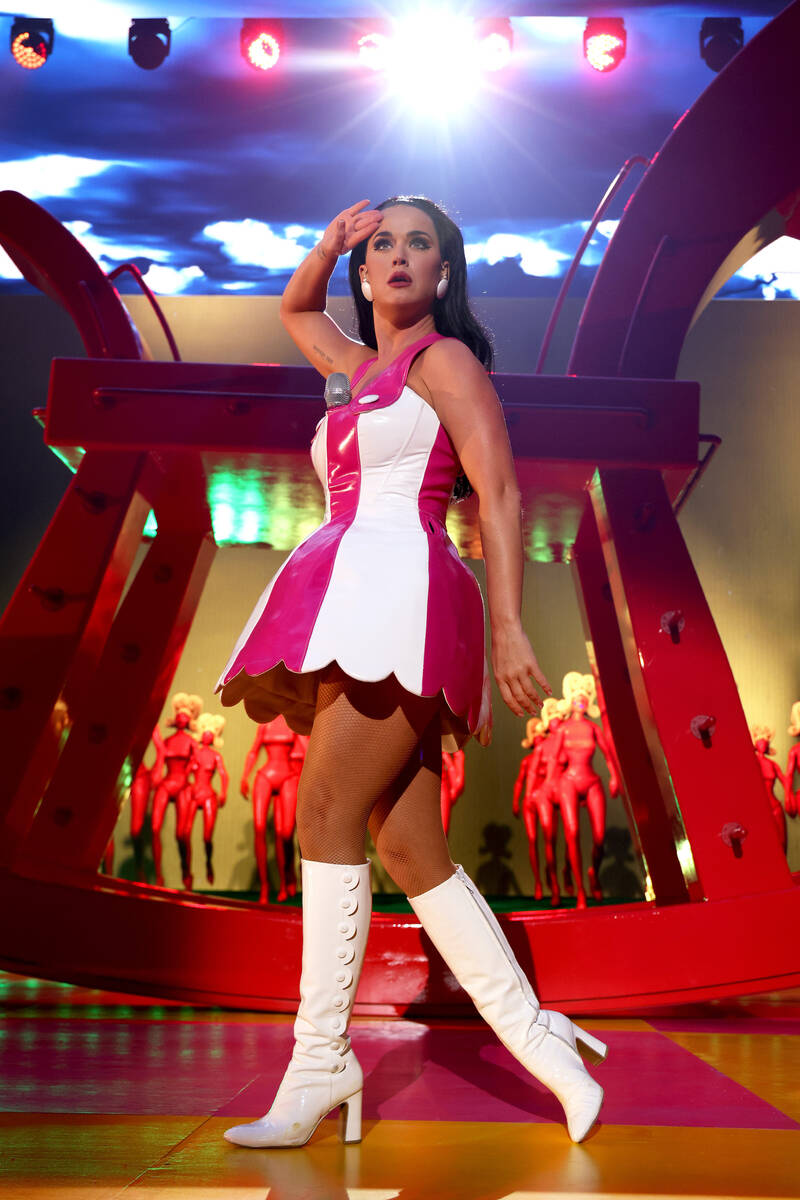 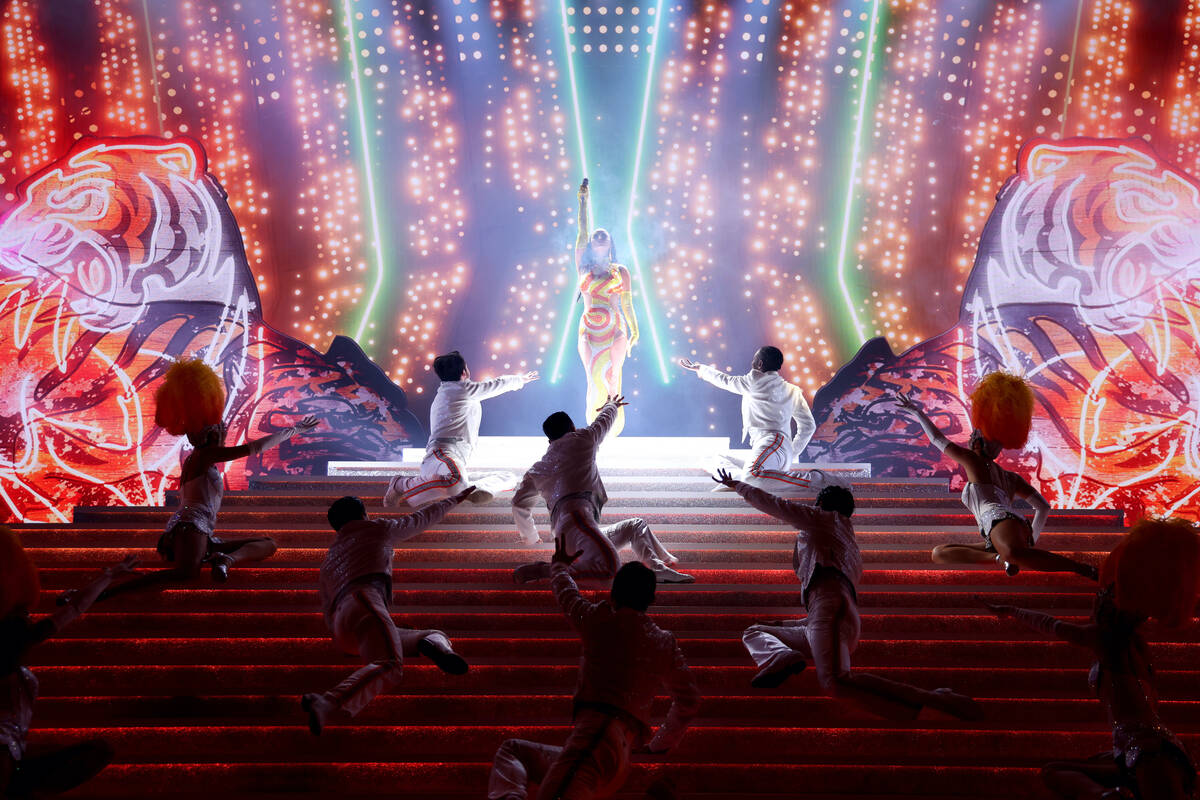 We hope the KatyCats didn’t become too attached to the giant, talking face cover.

We speak of Mr. Maskie, Katy Perry’s duet partner in “Play” at the Theatre at Resorts World Las Vegas. He has appeared during Perry’s acoustic set, delivering some Borscht Belt-fashioned jokes while reminding folks to keep the masks up during the show. Perry, seated at his side, wears a dress made of pull tabs with a pair of beer cans as the bra. She pours a brew from one, and says to the crowd, “Give applause to Mr. Maskie, especially if you believe in him.”

Well, Gov. Steve Sisolak might well have spelled the end of Mr. Maskie when dropping the state’s mandatory mask mandate just before Super Bowl weekend. What is to become of Mr. Maskie?

“I think his days are definitely numbered,” Perry said last week while taking a break from filming “American Idol” in Hawaii. “You know, it was a really fun pop-culture reference. It was definitely a lot of fun. It’s like a relic, a relatable reference of the time, and the times are changing.”

The drop in the mask mandate will only help a show has brushed sellouts since opening Dec. 29. According to Billboard, Perry has already made $7 million despite the face-cover policy. She’s back onstage from March 2-March 19.

More from our chat:

Johnny Kats: The trend in Las Vegas over the past few years has been to downsize shows, make them more intimate, blend entertainment and dining in supper clubs and create more intimate experiences. But “Play” is a big show, with a lot of investment in resources and imagination. You just came in here with the idea to go big, regardless, right?

Katy Perry: Yeah, I think that’s what I’m known for, just the over-the-top, always-creating world. I’m trying to one-up myself, pushing hard. But I think, for this, I knew it was going to be intimate in some ways. I don’t usually play 5,000-seat theaters, so you are actually going to be closer to me than ever. But when you’re on tour, traveling into a different arena every single night, you appreciate the consistency with the stage and you can be more imaginative.

Some of those set pieces wouldn’t travel well. They have to be kept in the theater, right?

I couldn’t tour this show even if I wanted to. I asked, like, how is it that we would even put a 30-foot toilet on one of these trucks? There’s not really a truck that fits it.

Unlike a tour, the audience that comes to see you in Las Vegas might not be familiar with your music. How do you build a show for that crowd?

The audience is going to be like one-third true fan, one-third people who are there for their 21st birthday or bachelorette party or celebrating something, and one-third just people passing through. Convention-goers, people who just want to have a nice experience after a nice dinner. So I wanted it to be visually stimulating, I wanted to play mostly the hits, because, you know, Joe-Bob here for a convention, maybe doesn’t know two songs of mine, will have a good time.

We have been really impressed that you were able to set up your show during all the challenges of the pandemic. I know you are a fan of Adele, and she was coming in last month and had to pull all of her dates. Do you have any thoughts or anything to say about what she’s been going through?

No, I don’t. I mean, I don’t know what the situation was. I can only speak from my own experience. But I do know there was a really wild time during that last variant. There are just so many curveballs, and so many pivots along the way. It was like running through a gauntlet of, like, “Here’s one swing! Here’s a spike!” So that’s what we experienced, and I can’t imagine what she was experiencing.

What was the inspiration behind “Waking Up in Vegas,” exactly?

Our family never took vacations. We didn’t have enough means to do that. But we have roots in Las Vegas, and we would pile into the car from Santa Barbara and drive to visit Grandma in Vegas. And so, you know, I grew up staying at — what’s the castle-themed hotel on the Strip?

Excalibur. There you go.

Yes! We’d go to the Excalibur, we’d be dropped off downstairs, and it would become normal for me to stay there, like, twice a year. When I was in my debaucherous 20s, there were a lot of nights I don’t remember, which is how it is when you’re in your 20s. Oof. We were really thinking the title of the song could be “Hello, Darkness, My Old Friend.” We’ve had some times in Vegas that I don’t even know if we remembered, actually. But when I was 18 I went with my boyfriend and we got fake married, we went to a chapel and we did all the pictures. I went to the thrift store and got a wedding outfit, we had a fake certificate and everything. It was a big joke.

You can totally of lose your perspective when you’re visiting Las Vegas, I remember that as a visitor. I still hear it all the time.

Yeah, when we were touring the theater we had a steak dinner, the biggest kind of beast I’ve ever seen in my life. And it was like, that’s so representative of what Vegas is. It’s like, more is better, it’s a bit of an excessive place, especially when you are one who is providing the entertainment and everyone wants to cater to you.

You’ve talked about (your grandmother), Ann Pearl Hudson, from the stage, having worked at the Stardust. If I have this right, she would have worked at Lido de Paris, right where you are performing now.

What have you discovered in the city that you like, outside of the Theatre and the hotel?

We went to see Omega Mart at Area15, and I love that place; it’s very fun. My next thing on my list is to see the signs at the Neon Boneyard. I want to go more to the old downtown part of Las Vegas, which I know has a lot of great restaurants and a kind of hipster scene. But I took my daughter (Daisy) to go see Santa at the Christmas display (“Enchant”) at the baseball stadium, about 45 minutes away, with the great lighted maze. It was so sweet. There is a whole other part of the city outside of the Strip that I am discovering and just loving. But can I tell you my favorite place?

Wow, you’ve already mentioned Area15. I would have thought that. What is it?

I gotta look it up. Hold on. (Pause) Oh! It’s Wally Wombats! This amazing play place for little kids. My nieces loved it, Daisy loved it. It’s like our go-to jam.

Well! I know the place, but nobody has ever dropped that as a business name, ever.

Yeah, I’m really, like, going for it in Vegas and setting up a really cool vibe for myself.