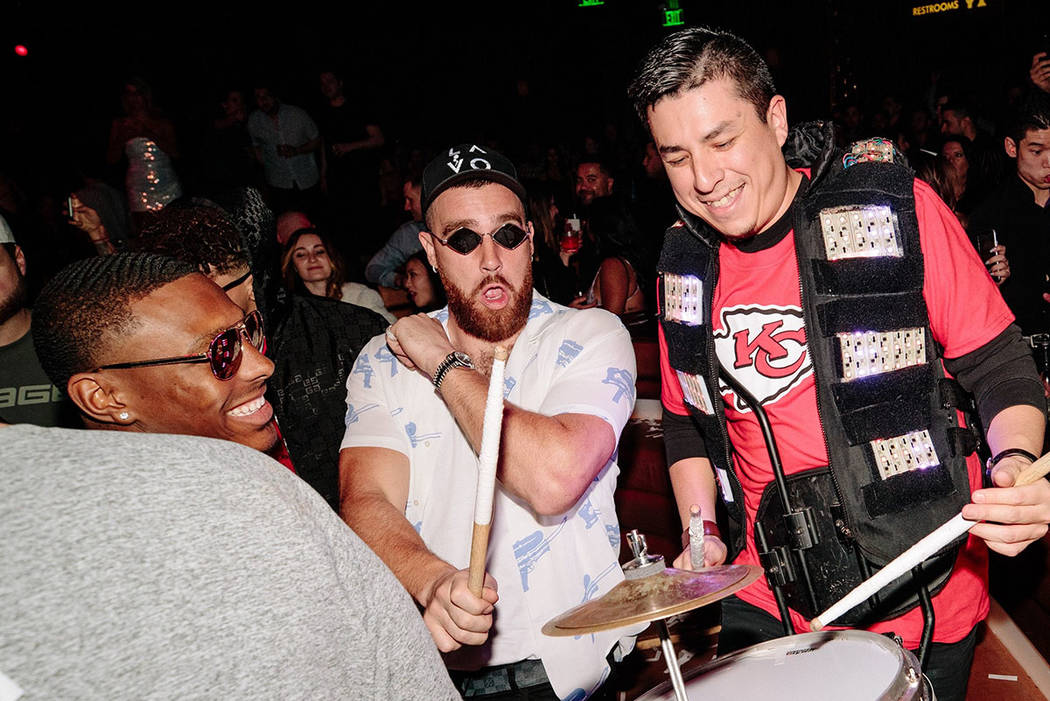 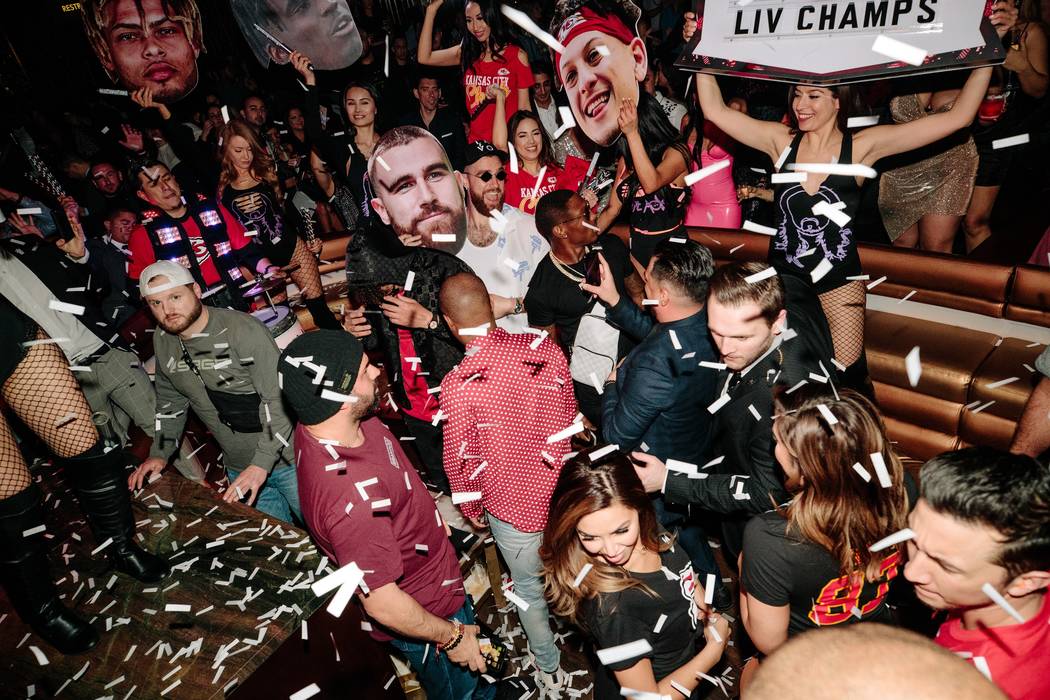 The scene at the Kansas City Chiefs' victory party at Omnia Nightclub at Caesars Palace on Saturday, Feb. 8, 2020. (Wolf Productions) 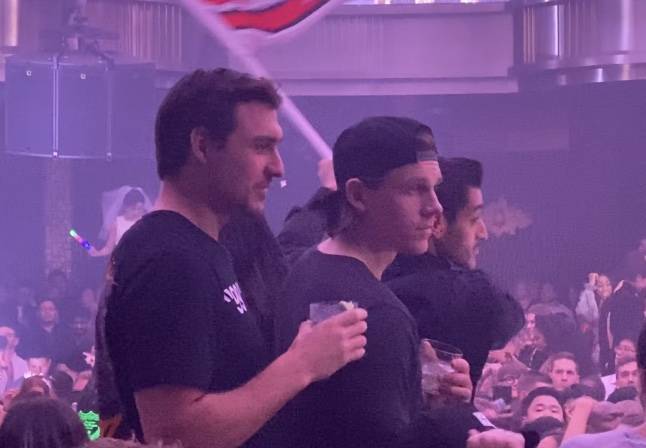 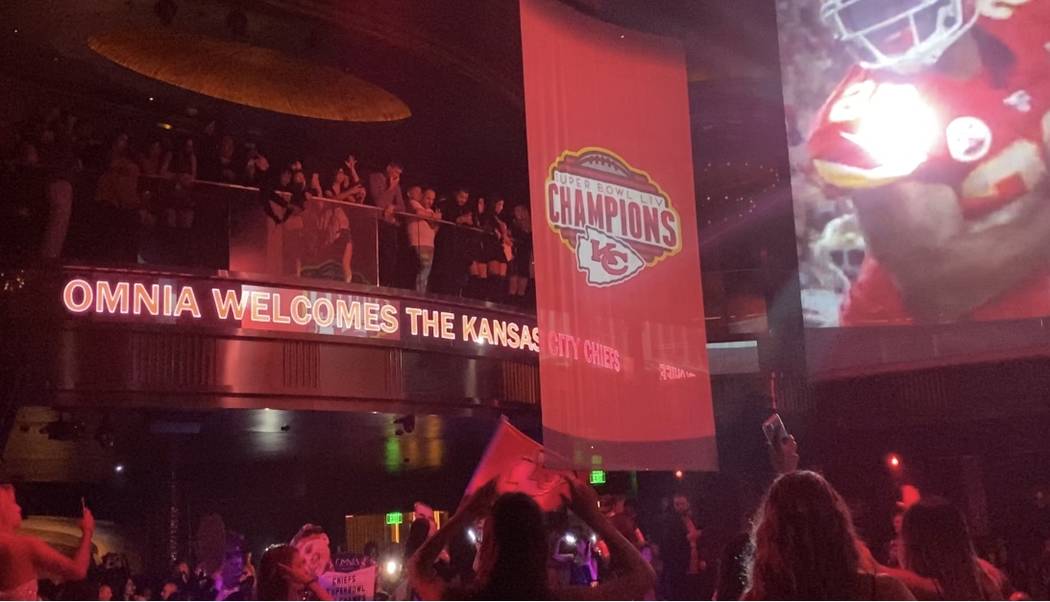 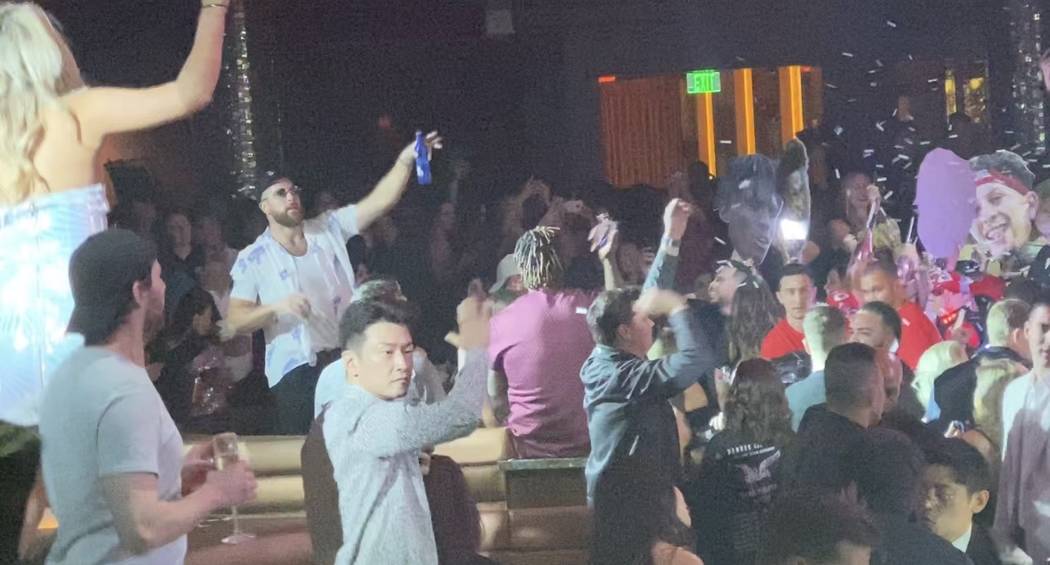 On the field, Patrick Mahomes Kansas City Chiefs superstar quarterback. But in the club, Travis Kelce is a born signal-caller.

Throw it down, throw it back … it’s @tkelce w/ a @Chiefs teammate I can’t readily identify chugging the brews #OmniaNightclub #OnlyVegas #VegasVille pic.twitter.com/Mw6YCx5tY7

Omnia and Hakkasan Group mainstay Steve Aoki was the night’s headliner. He arrived at about 1:30 a.m., bouncing behind the decks and buoyed by heavy blasts of CO2 from the club’s party canons. The famed LED chandelier glowed in Chiefs’ red and gold and repeatedly descended on the packed dance floor.

Even members of the NHL’s Carolina Hurricanes took over a couple of VIP booths, having just vanquished the Golden Knights at T-Mobile Arena. It was good to see a smiling Erik Haula, a former Golden Knights favorite, taking in the scene, standing atop a booth with his ballcap spun backward.

But if there was ever a night when an NHL team would be overshadowed in a Strip nightclub, this was it. While Mahomes, wearing oversized sunglasses, kept his head down in the middle of the team’s VIP booth, the brawny Kelce was up and out, grooving and throwing back the cold ones.

The scene was full-tilt by 1 a.m. When Fergie DJ, who opened the night, unleashed “(You Gotta) Fight for Your Right (to Party!),” Kelce treated the Beastie Boys’ classic like his personal soundtrack. He pumped his arm, pointed at various dancers on the floor and inspired generally raucous behavior.

Similar to the Jewel party the previous night, the club was bedecked in Chiefs flags and scrims, video highlights of its victory over the 49ers, servers wearing the “KC” arrowhead logo, champagne-bottle sparklers, and — naturally — several blasts from the party club’s party cannons.

There were a couple of birthdays being celebrated, too, and two marriage proposals. But you couldn’t make out quite what was happening. Too many Chiefs.

Kelce is keeping alive a tradition of NFL tight ends to party at Vegas nightclubs and dayclubs. Rob Gronkowski, in his heyday with the Patriots, was a summer regular at Rehab at Hard Rock Hotel. He and his entourage celebrated his 26th birthday at the pool party in 2015 (and oddly, Gronk and Kelce are both 30 years old, though Gronk is out of the game). New Orleans Saints, New York Giants and Carolina Panthers tight end Jeremy Shockey was also a fan of the HRH pool party. Shockey was actually taken out on a stretcher by paramedics in May 2009, suffering from what the Saints described as dehydration. He was listed as “out” for the rest of the day.

Spiegelworld founder Ross Mollison is following through on his plan to pull his shows from the Edinburgh Festival Fringe over Brexit concerns. Mollison entered into a five-year plan to premiere one Spiegelworld show per year at the prestigious, monthlong festival. The first was the widely applauded “Atomic Saloon Show” in August, which made its Strip debut at The Venetian’s Grand Canal Shoppes in September.

The United Kingdom has left the European Union on Jan. 31, entering an 11-month transition period, and Mollison is concerned about region’s financial markets. On the day the UK split from the EU, Mollison was reviewing sites in Paris. He’s also looking at options in Sydney, Australia.

As Mollison said during last year’s Fringe appearances, “The uncertainty of what is the law, what is the visa situation, what happens with visas next year if you’re not part of the EU? I have no idea.” The hit to the region is substantial. Media reports indicate The Fringe stands to lose an estimated $25 million (in U.S. currency) as a result of Spiegelworld moving out.

Frank Marino is back on stage, full time, in “Legends In Concert” beginning Monday night. Marino is under a two-year contract to revive his Joan Rivers role (just 10 weeks or so after “retiring” his famous portrayal). Marino still intends to produce a show under his “Divas” brand, and the premiere of that production is next Sunday at 4 p.m. at the Italian American Club.

I chatted with Marino during “Legends” rehearsals Friday, for an upcoming episode of PodKats! This was a spirited session during which I asked the long-running headliner if he has any plans to see “RuPaul’s Drag Race Live!” at Flamingo Showroom. Marino’s answer was a hard no. He is clearly agitated about the “RuPaul” show, which is the Caesars Entertainment drag production that moved in when “Divas” was forced to close in June 2018.

Note: This version of the column corrects the showtime for Frank Marino’s show at Italian American Club.