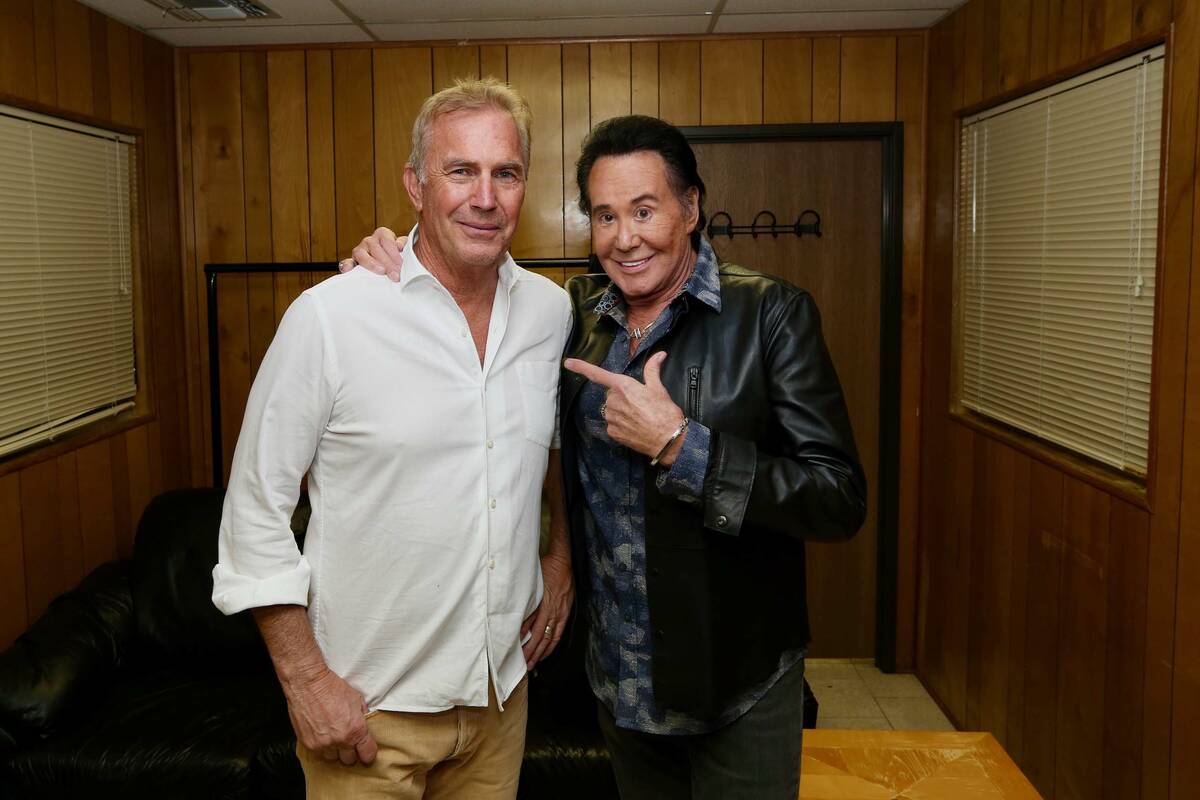 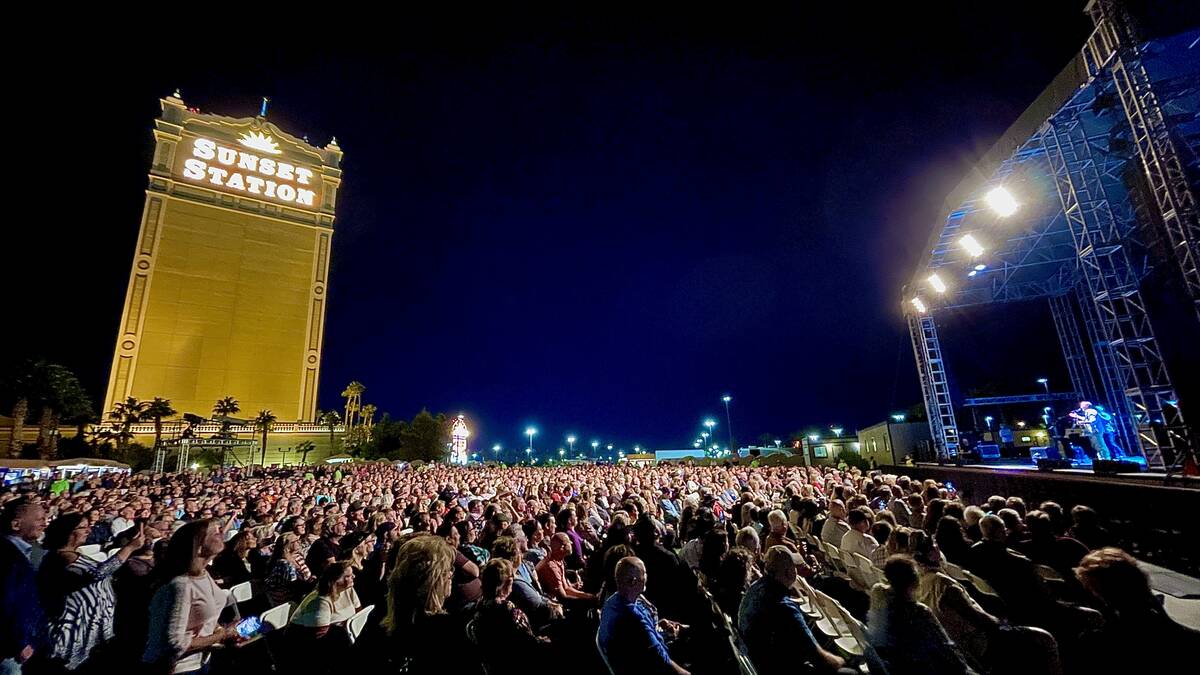 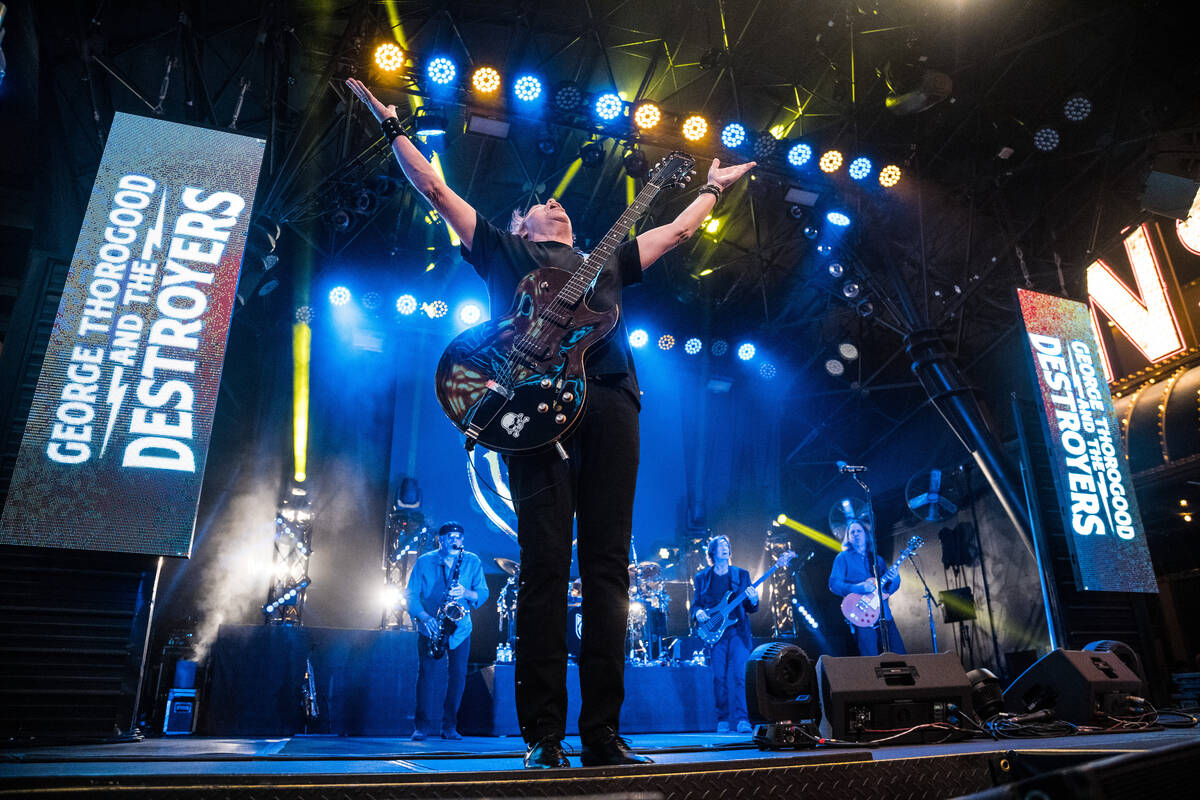 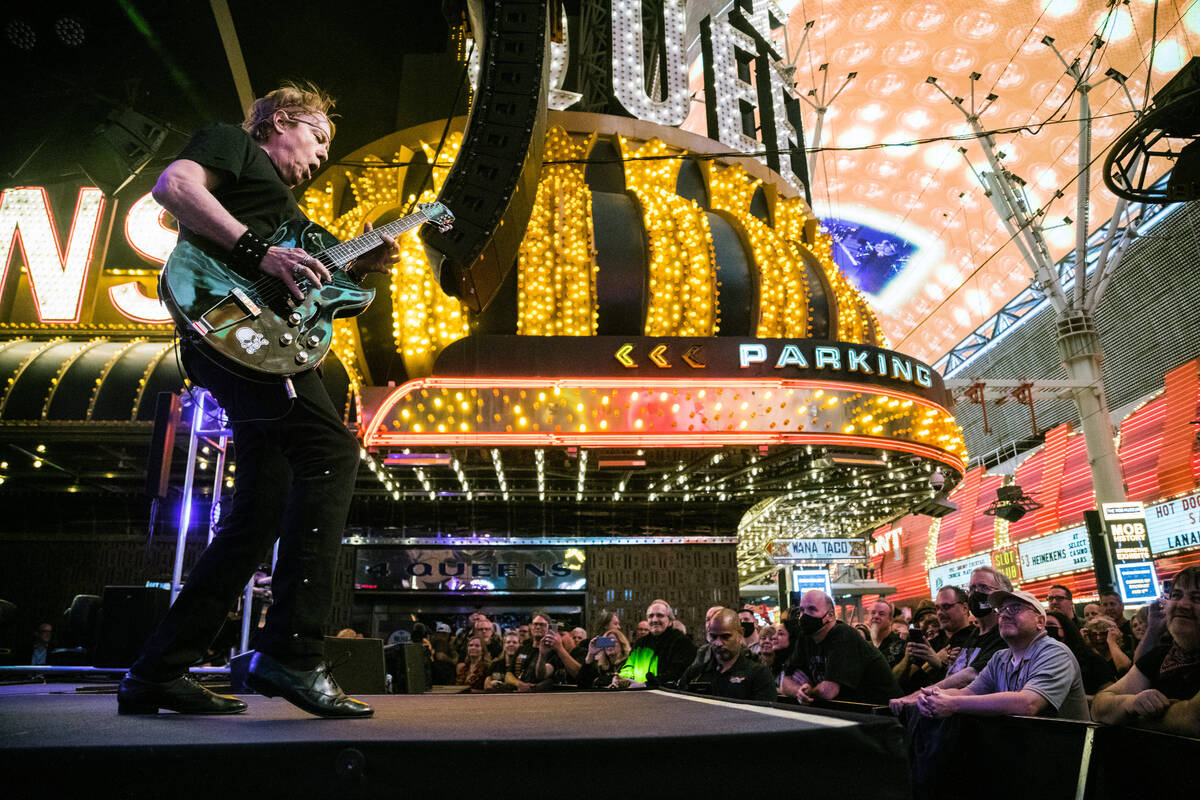 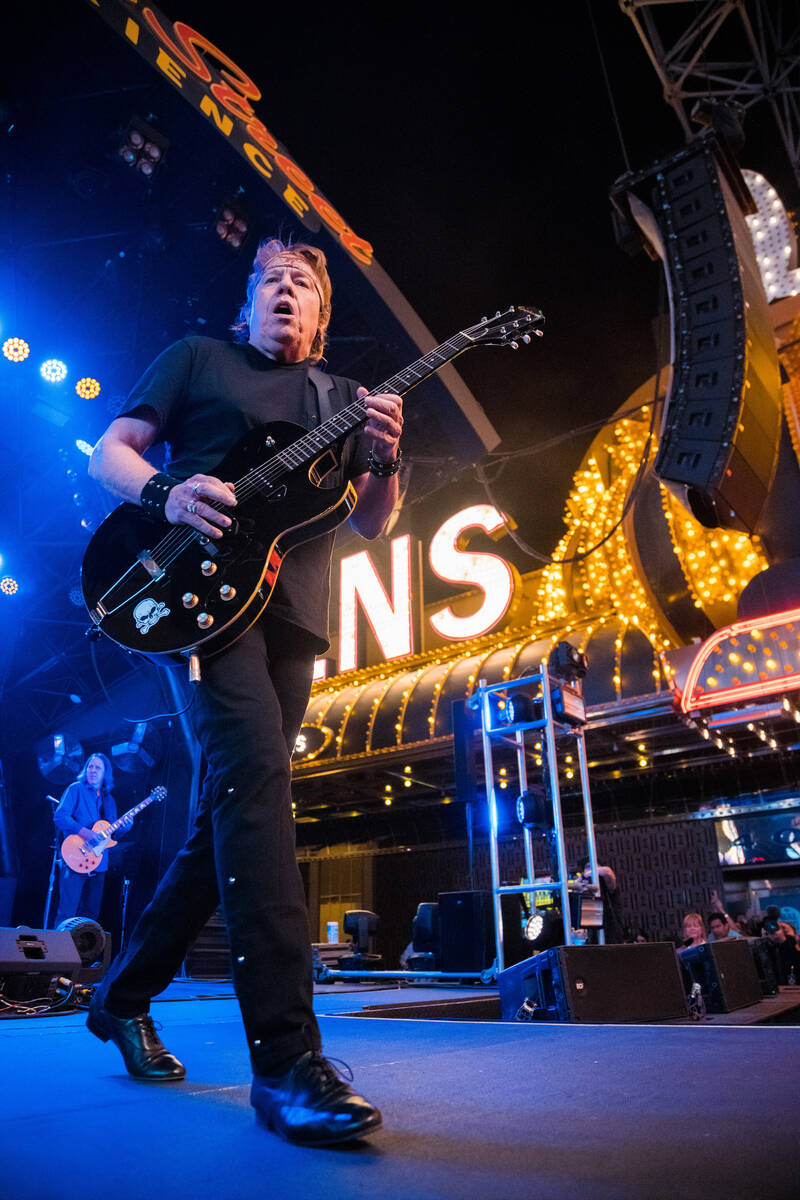 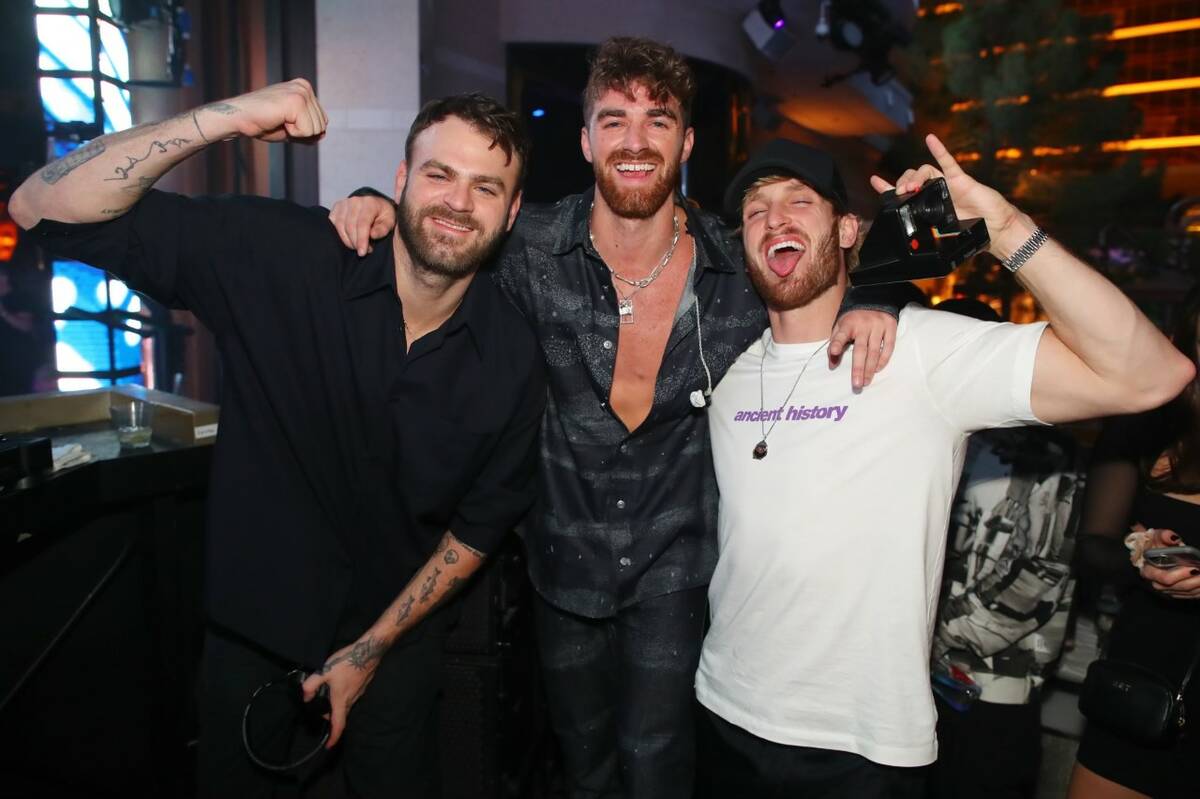 Logan Paul is shown with The Chainsmokers at XS Nightclub at Wynn Las Vegas on Saturday, Nov. 6, 2021. (Danny Mahoney)

If you build it, he will come.

Especially if “it” is a resort amphitheater, and “he” is Kevin Costner.

Costner’s Modern West band sold out Sunset Amphitheater on Saturday night. The performance was just ahead of the premiere of Season 4 of his “Yellowstone” drama series on Paramount Network.

Costner’s concert packed the 4,400-seat venue, even while competing with the Rolling Stones, Sting and Canelo Alvarez on the Strip in an action-packed VegasVille weekend.

Costner did draw Mr. Las Vegas to the show. Wayne Newton, who has known Costner for years, was in the crowd.

Costner mentioned Newton from the stage, when he said he does not attend shows to sing from the crowd during “callback” moments. (What can be called the “Sweet Caroline” syndrome). All guys should be exempt from singing back to the headliners.

“Men don’t have to sing … When I go to a concert, I want to hear Wayne sing,” a grinning Costner said from the stage. “I want to hear somebody sing. I don’t come to sing. It doesn’t matter if you ask me to sing. I’ll sing if I want.”

Man, finally a star has brought this up from the stage. We are members of the anti-singalong coalition. Same with encores, too. Anti-singalong, anti-encore.

Newton met up with the two-time Oscar winner backstage, chatting and posing for pics. If Costner wants to see Newton’s show at Flamingo, and not sing along, that likely will happen in early January.

That almost qualifies as a residency by today’s Vegas standards.

Rather, Wallace appeared at Don Barnhart’s Delirious Comedy Club at Downtown Grand. The longtime Vegas favorite worked out some new material in the 8 p.m. shows.

“He’s better than ever,” Barnhart said.

There are no updates on Wallace’s plans to return to Westgate Cabaret, however. He’s not formally committed to returning. This is relevant, as Westgate has been Wallace’s pre-COVID Vegas residency home.

The comic says he is working around his schedule on Norman Lear’s “Clean Slate” half-hour series. The show is developing for IMDBtv, the free streaming service offered with Amazon’s subscription Prime Video. No premiere date has been set for the series, which has been thrown off-schedule by COVID logistic snags.

Expect to see Wallace onstage in other clubs this week, too. Not on the bill, but yes, on the stage. He’s still working material for his act. Stand-up comedy, he says, “is the hardest job in the world.”

Logan Paul, who boasts the description “YouTube star-turned-boxer,” partied with The Chainsmokers at Wynn XS Nightclub on Saturday.

With scant fanfare, the dean of Strip headliners, Mac King, has cut his schedule from two shows to one show per week at Thunderland Showroom at Excalibur.

Showroom proprietor Adam Steck of SPI Entertainment says King’s schedule was trimmed in August, and that the crowds and headliner are better served in a full room. True. Also, we need King to sell out every show, just as a civic requirement.

King is performing two-show dates Thanksgiving week and weekend, back to 3 p.m. at the end of the month. He moved into ExCal in June, enacting the same 1 p.m.-3 p.m. schedule he’s held since opening at Harrah’s in 2000.

George Thorogood and the Destroyers destroyed (in a musical sense) the Fremont Street Experience 3rd Street Stage on Saturday night. The show capped the 2021 Downtown Rocks concert series. FSE is no longer confirming, sharing or (I feel) memorizing the capacities for these shows, but in the past such headliners as Cheap Trick have drawn 15,000 to the free shows.

Up next at FSE is Vince Neil on Nov. 24, Thanksgiving Eve. This is not under the Downtown Rocks umbrella, but is the central event in the Drinksgiving holiday celebration. Similar to Festivus, Drinksgiving is entirely made up. But cheers, anyway.

Updates from the pre-eminent, and only, live-entertainment fortress at Miracle Mile Shops at Planet Hollywood. We speak of course of David Saxe Production’s V Theater and Saxe Theater:

— Saxe says he is planning for “Vegas! The Show” to return to Saxe Theater the week of Christmas. That would be quite a holiday present, as auditions are still not scheduled. They would need to be held about a month ahead of previews. But this is at least confirmation that Saxe intends to reopen the venue this year, with a few other shows in play to move into that space.

— “The Tiger Party” (working title) project is braking, for the moment. This is the “Tiger King” parody that Enoch Augustus Scott of “Zombie Burlesque” and CSN music professor Mark Wherry originally developed, with Saxe onboard as financial backer and also co-director. The timeline of opening in December has been under review as Joe Exotic announced last week he is suffering from prostate cancer.

The “creatives” of “Tiger Party” wanted to premiere the show at about the same time the sequel series “Tiger King 2” debuts on Netflix on Nov. 17. They are now being prudent, which is a term not often used to describe Scott.

— Veteran hypnotist Marc Savard is holding his return until mask mandates are relaxed. There is no timeline for that decision. Savard is no longer onsale, leaving open the 10 p.m. slot at V Theater and saving money on ticket refunds. Savard was back for about a month in late-June through July, the unmasked era. Savard says he does plan to restart at V Theater when he can go with full, onstage audience participation onstage. Stacking volunteers from the crowd, for example.

I’d posted to Twitter last week that Mike Tyson had checked out the Theater for Resorts World Las Vegas as a potential site for his “Undisputed Truth” relaunch. The room is probably too big, I noted, even if seating is taken down from 5,000 to 1,500. Kip Kelly re-tweeted the response, “Far too big but I know a place.”

Kelly is creative director of The Beverly Theatre, opening mid-2022 in downtown Las Vegas. The venue is likely too small for Tyson’s show, just under 200 capacity, but Kelly misses no chance to build buzz.

Also on the #ResortsWorld front: #MikeTyson and his wife, Kiki, toured the theater last night. Looking at a Vegas home for his “Undisputed Truth” show. Theater can be adjusted to 1,500 cap, probably still too big. #RJNow @reviewjournal camera 📷 @chitosephoto pic.twitter.com/kTSDrClEMa

“The Sandman,” the latest gem from Richard Oberacker and Robert Taylor being staged at Majestic Repertory Theatre in the Arts District. Uniformly positive feedback, packed houses. Shows are 8 p.m. Thursday, Friday and Saturday and 5 p.m. Sunday. Get there.

Tyriq Johnson, a column fave and also a fave of my mother, heads up Serpentine Fire at 7:30 p.m. Wednesday at Myron’s at The Smith Center. This the city’s exhilarating Earth Wind & Fire tribute band, fully stacked. Tickets are $25 and $39, go to the thesmithcenter.com for details, ducats ‘n’ dance moves.