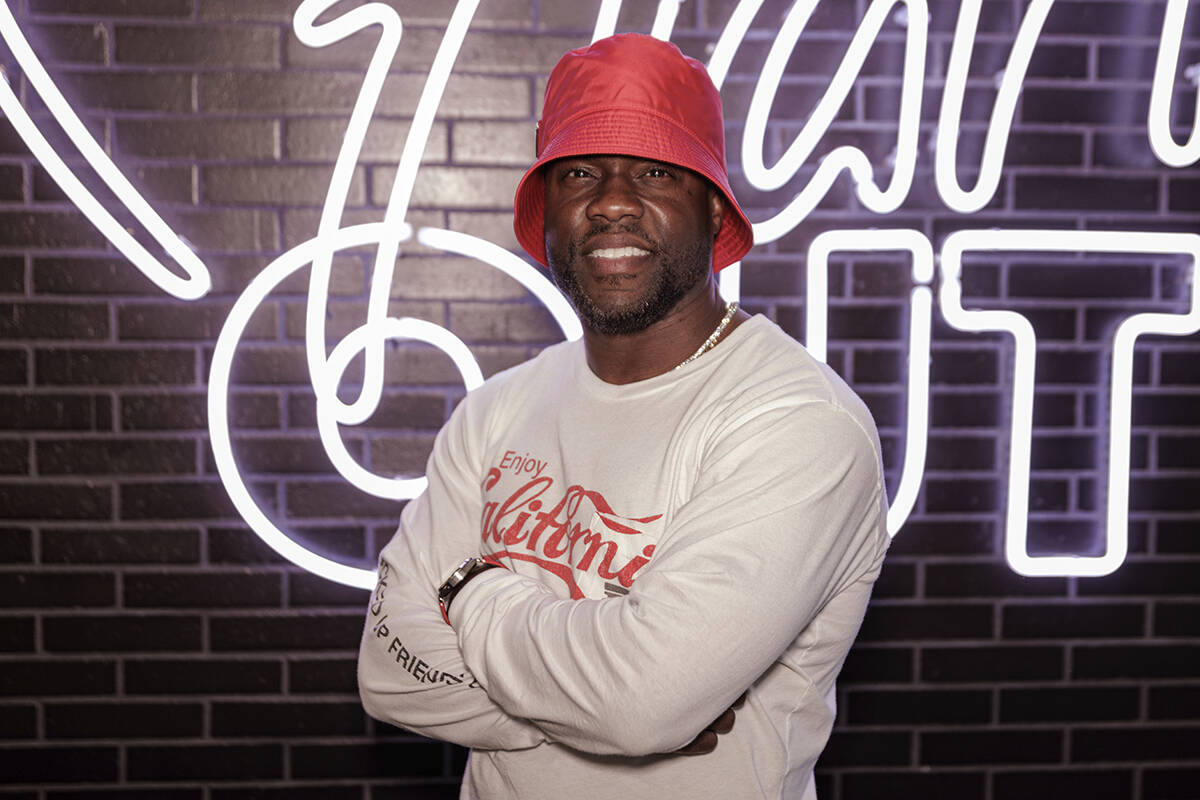 Kevin Hart poses for a portrait at the opening of his new vegan fast-food restaurant "Hart House" on Wednesday, Aug. 24, 2022, in Los Angeles. (Photo by Willy Sanjuan/Invision/AP).

Since opening in November 2021, Resorts World Theatre has staged pop, rock, country and magic headliners. The venue is now bolstering its comedy presence.

Film and stand-up star Kevin Hart is returning to Resorts World on March 17-18. That’s merely the beginning, as we anticipate more dates this year. Hart has performed four shows at Resorts Wold Theatre on his “Reality Check Tour,” including New Year’s Eve and New Year’s Day.

But Hart’s series is not being billed as a “residency.” We’ll go with “extended engagement.” He joins recording stars Katy Perry, Carrie Underwood, Luke Bryan and famed illusionist David Blaine in rotation at Resorts World.

“Being one of the first comedians to take the stage at Resorts World Theatre in 2022 and ringing in the New Year from the venue was an unforgettable experience,” Hart said in a news release issued Wednesday. “The intimacy of the theatre combined with the energy of Las Vegas audiences is unparalleled, and I’m thrilled to bring my ‘Reality Check’ Tour back for more performances in 2023.”

Hart has taped his upcoming Peacock comedy special, which is to debut in April, at Resorts World. He also appeared live on CNN’s New Year’s Eve coverage with Anderson Cooper and Andy Cohen.

Hart is the first comedian to perform at the new theater for a while simultaneously taping his next comedy special. Recently, he took the stage to ring in the New Year at Resorts World Theatre, appearing live on CNN’s New Year’s Eve Live from New York City’s Times Square with Anderson Cooper and Andy Cohen.

Hart flayed CNN for barring the co-hosts from drinking alcohol on the air during the celebration from Times Square.

“What’s going on? I can’t believe this right now,” Hart said during a video-chat with the duo from Resorts World. “I’m watching you guys and you’re completely sober. This is disappointing. You’re sober. What’s happening? What is happening right now?”

What was happening was Cooper laughing through the interview, as Hart threw back tequila shots of his liquor brand, Gran Coramino. “You guys can’t say anything about it but I can. I can say things about it. This is absolute (expletive). I don’t like it one bit. I’m going to say what you want to say … I can’t believe this,” said the comic star, never one to mince words.

Continuing with this all-comedy effort:

Luenell at Jimmy Kimmel’s Comedy Club. She holds forth at 9:30 p.m. Sundays and Mondays. She is a hot ticket, a not number (just ask her) and dang funny.

The new club of that name is still a go at Westgate Cabaret, is planning to open 10 p.m. Feb. 16 and run at that time Thursdays through Sundays. Doug Miranda produces the show in his DDM Productions company.

The club’s opening means that George Wallace will not be back at Westgate. Wallace has popped up, here and there (including Kimmel’s Club), but never returned to residency after the pandemic.

Miranda also backs “Soul of Motown” at the Cabaret, and also runs The Grand Majestic Theater in Pigeon Forge, Tenn. He’s new to the comedy scene in VegasVille, and plans to build a roster by opening the club, running the club, and luring comics to the club.

We have another shot to see the amazing Wayne Brady at Mirage Theater. The host of “Let’s Make a Deal” and improv master headlines Jan. 14. We became a fan of Brady during “Whose Line is it Anyway.” He also captured the second-season championship of “The Masked Singer.”

Brady’s days in Vegas date to MGM Grand Adventures Theme Park in the mid-1990s, where he was a hit as Elvis Jackson (yep, a black Elvis). He also headlined Sands Showroom at The Venetian (today’s Summit Showroom) in “Makin’ It Up” from 2007-2010. Brady can sing it, dance it, joke about it and take on any suggestion from the crowd.

Veteran comic and long-running Aces of Comedy at the Mirage favorite Ron White is retiring from the stage. His final shows were New Year’s weekend at Mirage Theater. We feel White might feel the urge to return by the summer. But for now, it’s cigars and golf for the great stand-up.

Laugh at the Factory

Longtime “Saturday Night Live” fans remember Rich Hall and his “Sniglets’ wordplay segments. These were words or terms that should be in the dictionary, but aren’t. Such as, a “VWI” is “Voting While Intoxicated,” “Squimmets” are the threads on the sides of bananas, and “Purpitation” is taking an item from one department of a supermarket and returning it to another.

Hall is headlining Laugh Factory at the Tropicana from Jan. 16-22. His special guest Mike Binder is the comic and filmmaker whose five-part documentary on “The Comedy Store” is a must for any comedy fan. Binder is also developing a doc on his return to the stage. His upcoming stint in Vegas should be in it.

Twinning out upcoming shows by Live Music Society. The band opened for Janet Jackson’s New Year’s Eve performance at Wynn Las Vegas. LMS is at Mandalay Bay’s Rhythm & Riffs from 10 p.m.-2 a.m. Thursday, and at The Strat’s Remix lounge from 9 p.m.-1 a.m. No cover, no hassles, and get into the groove.