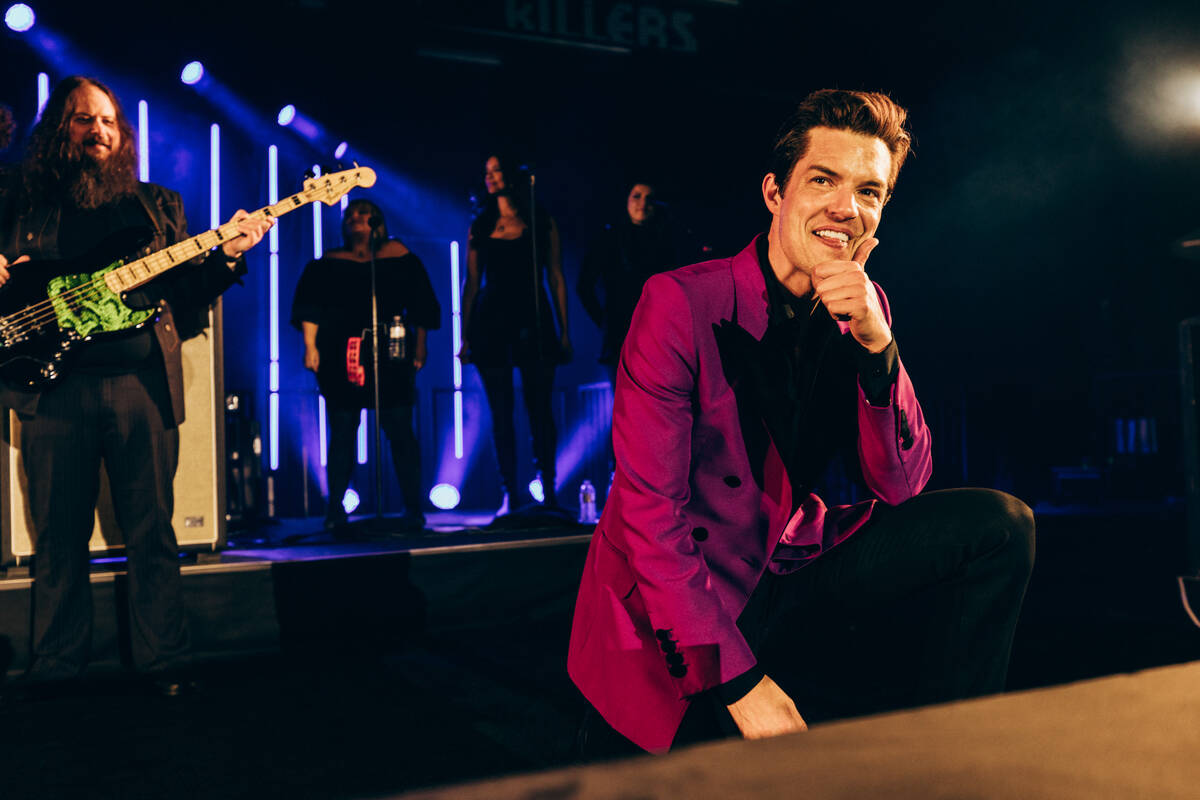 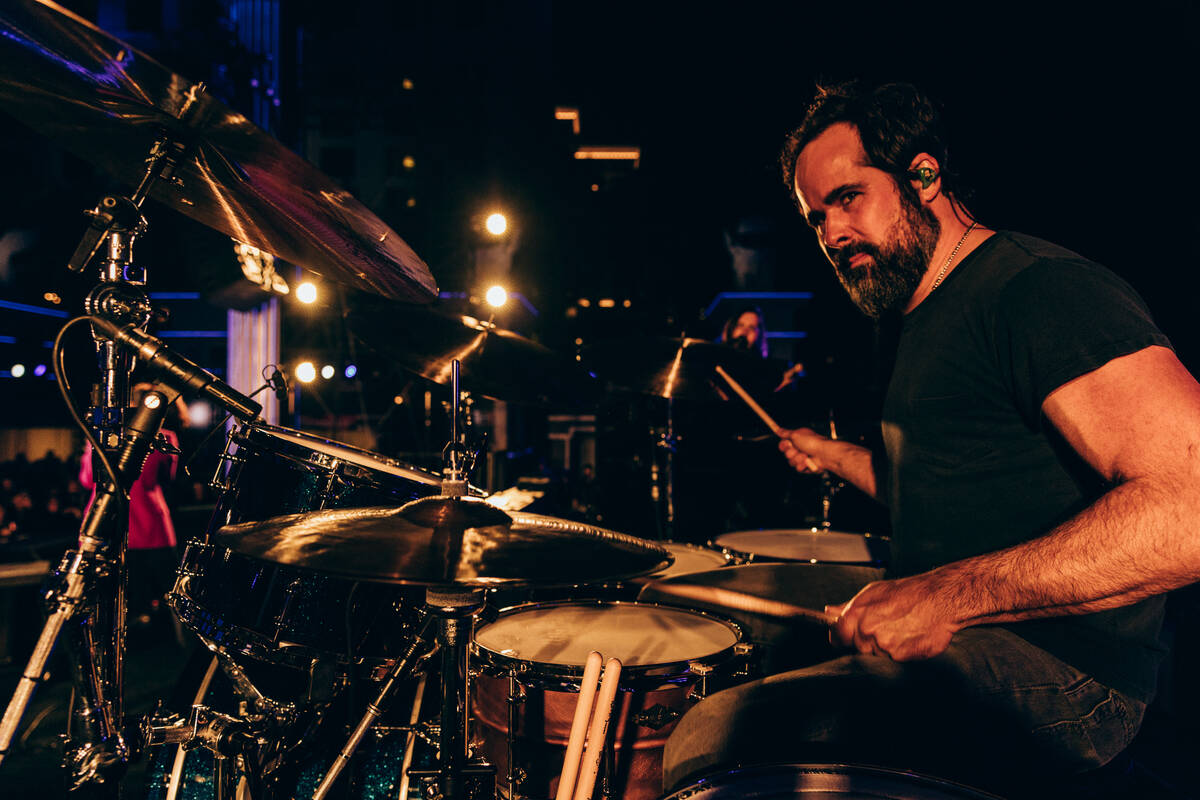 Ronnie Vannucci of The Killers performs at the Las Vegas Grand Prix/Formula One party at Garden of the Gods at Caesars Palace on Saturday, Nov. 5, 2022. (@JasonPhelps) 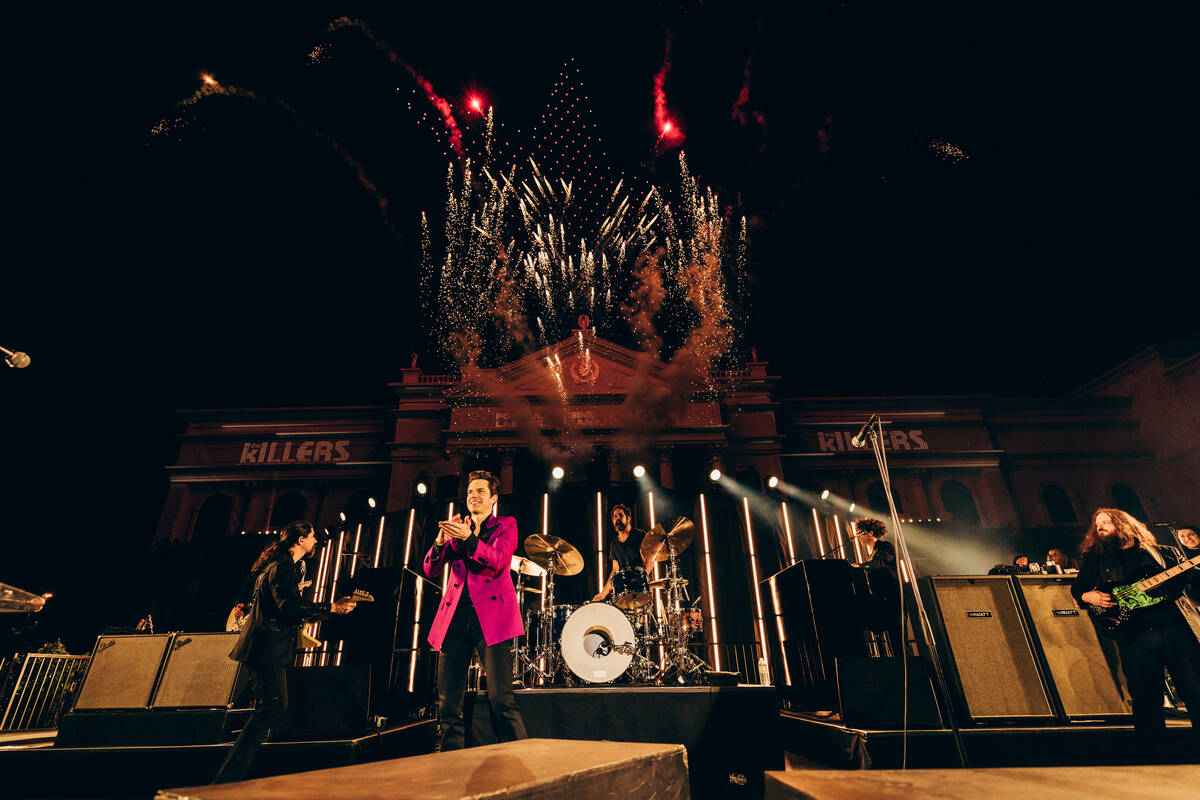 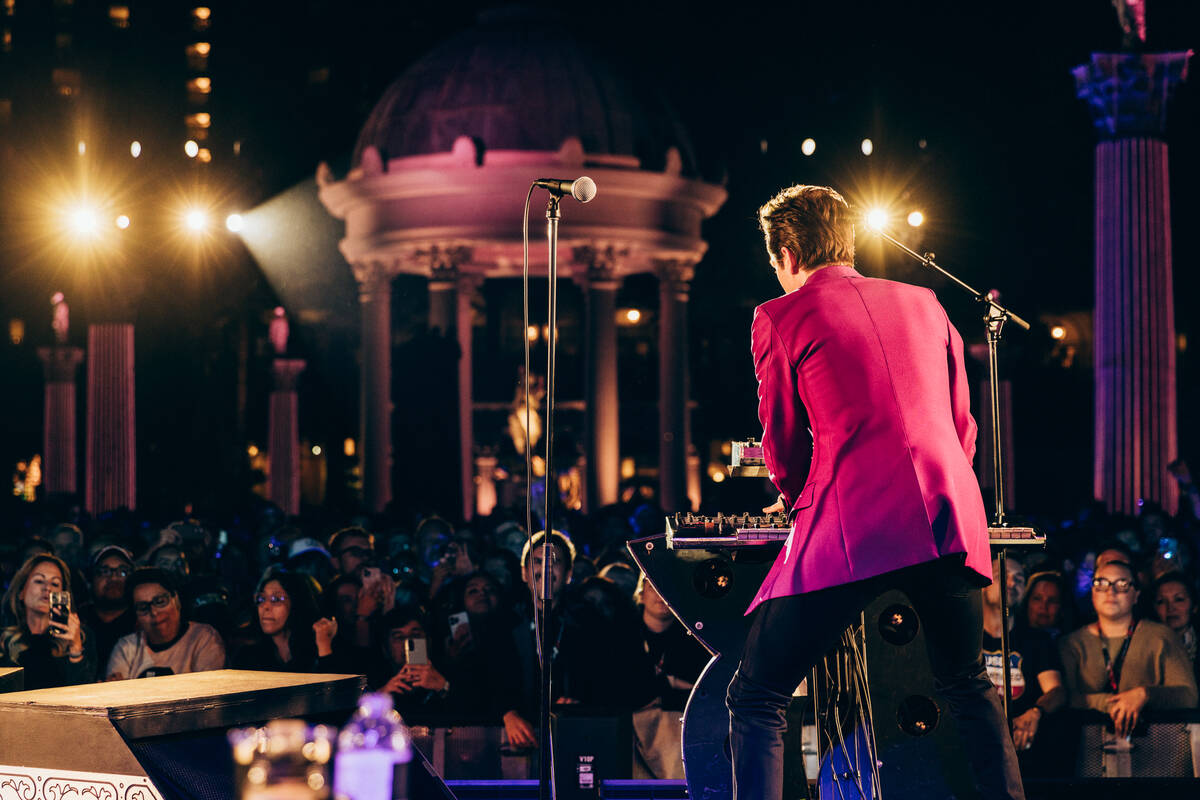 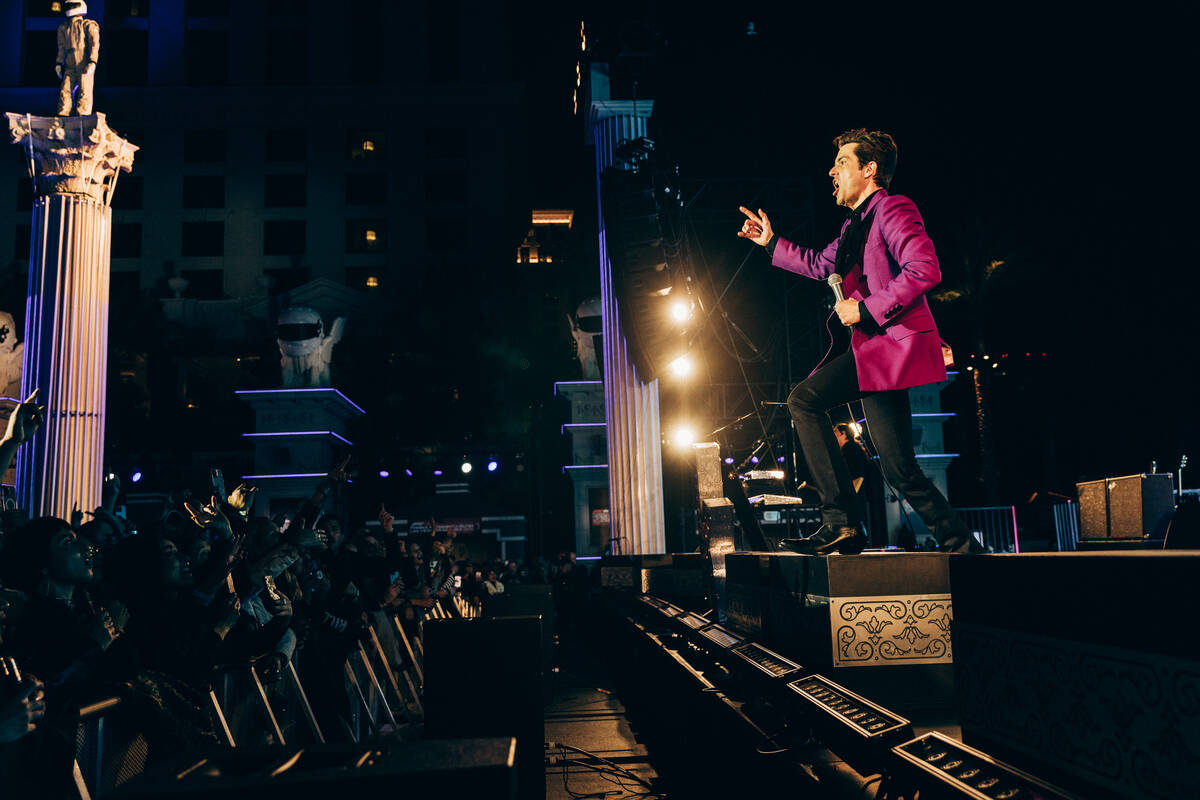 For the past five years, Brandon Flowers has not lived in Las Vegas. But his soul is still here.

“I went to visit my dad in Boulder City and I hadn’t seen a desert sunset in a long time. It was emotional for me,” Flowers said a few minutes before The Killers’ Las Vegas Grand Prix Fan Fest performance at Caesars Palace’s Garden of the Gods. “It was beautiful.”

Flowers scrolled to a series of photos on his phone, the orange-red sunset glowing against the blue sky. He’s right, it was beautiful.

“I mean, no matter where we go, or where or where we are, there’s always going to be a piece of my heart here,” said Flowers, whose family moved to Park City, Utah about five years ago. “I carry Las Vegas with me for sure. I was thinking of that today. There was something about the light today at about 4:30 that really got to me.”

The Killers’ performance capped the Las Vegas Grand Prix/Formula One festival weekend, which effectively took over the heart of the Strip. The band’s show for a few hundred VIP attendees was far removed from the race cars’ staging area, performed at the resort’s lavish pool oasis. The pits, it was not.

The concert marked The Killers’ third performance this year in Las Vegas. They turned the Chelsea at The Cosmopolitan into a bounce house in April. Their August show at T-Mobile Arena was a veritable Vegas revival. It felt as if all 18,000 fans were locals, for the emotional outpouring.

The Killers’ frequent (and, lucrative) appearances in Vegas lead to the obvious inquiry: Will the band ever host a residency in their hometown?

“We’ve talked a little bit about it. I’m not I’m definitely not opposed to it. I love the idea,” said Flowers, donning a brilliant, magenta blazer over a black shirt and black slacks for Saturday’s show. “I thought it was groundbreaking when Celine Dion and Elton John sort of started the residencies here at Caesars.”

Flowers then grinned, reaching to his youth.

“You know, I used to go the Omnimax here, when I was a kid,” the front man said, referring to the space-age theater complex pulled apart for the Colosseum. “So it is very interesting to me to see what became of it.”

Flowers has clearly given the residency concept some thought. The band would doubtlessly be a popular draw at any Las Vegas venue.

“Vegas used to be thought of as a place where comedians and performers came to sort of end their careers,” Flowers said. “So it was amazing, for us, to start here. I don’t see it being a place where we would finish, but I see no problem with a residency.”

Flowers wears a necklace to keep Vegas close. It’s a modest, state of Nevada piece, “a cheap pendant I bought on Etsy about 10, 15 years ago,” as he describes. “The band that’s carrying it, I got from Tiffany, is more expensive. It’s very sentimental to me.” Flowers usually kisses the necklace as he leaves the stage.

You might have noticed #BrandonFlowers showing off his necklace at the close of last night’s @thekillers show. It’s this, and he never takes it off … #RJNow @reviewjournal #Vegas #Nevada pic.twitter.com/ZYQm4CUZxf

Flowers recently performed with one of his (and, most rock fans’) idols, Bruce Springsteen. The Boss joined the band for its encore at Madison Square Garden on Oct. 1, on their “Imploding the Mirage” tour stop. They played classic Springsteen hits “Born to Run” and “Badlands,” along with“Dustland,” their collaboration from last year that re-arranges the Killers’ “Day & Age” single from 2008.

“OK, it was unbelievable,” Flowers said with a laugh, after being asked how it felt. “We knew for about a month this was happening, so we rehearsed his songs to death. We spent our sound checks, all of our down time, just like making sure that every t was crossed, i was dotted.”

The band had intended to honor Springsteen near his New York/New Jersey roots. But they felt he paid his own tribute to the band.

“But it was such an honor for us, just to do two of his songs,” Flowers said. “It was such a compliment, an incredible moment for us.”

Flowers performed some fast math on the band’s history. The Killers formed in Las Vegas in November 2001.

“That’s when it started. I would have met Dave (Keuning), our guitarist, exactly 21 years ago,” Flowers said. “I just came to the realization that, in my life, I’ve been in the band longer than I haven’t been in the band. I’m 41 now, looking at some of the bands who came out when we did, like Franz Ferdinand, The Strokes, Interpol, some great bands, I like where we are.”

Flowers likes where he is, too.

“Being in The Killers is part of my identity,” he said, about to rock Vegas once more. “I’m so proud to be in this band.”

Steph Payne, a standout singer a couple times a week Delilah and at Bootlegger Bistro (where she sings Friday nights), hosts at Gatsby’s Supper Club inside Gambit Henderson 8 p.m. (doors and dinner at 6:30 p.m.) Saturday. The Steph Payne Experience band is Matthew Banks on keys/MD; Kip Mungin on drums, Lloyd Anderson on bass, Sean Carbone on guitar. A mix of originals and covers, cabaret-style. Hit aegrouplv.com for info, and for some cool pics.