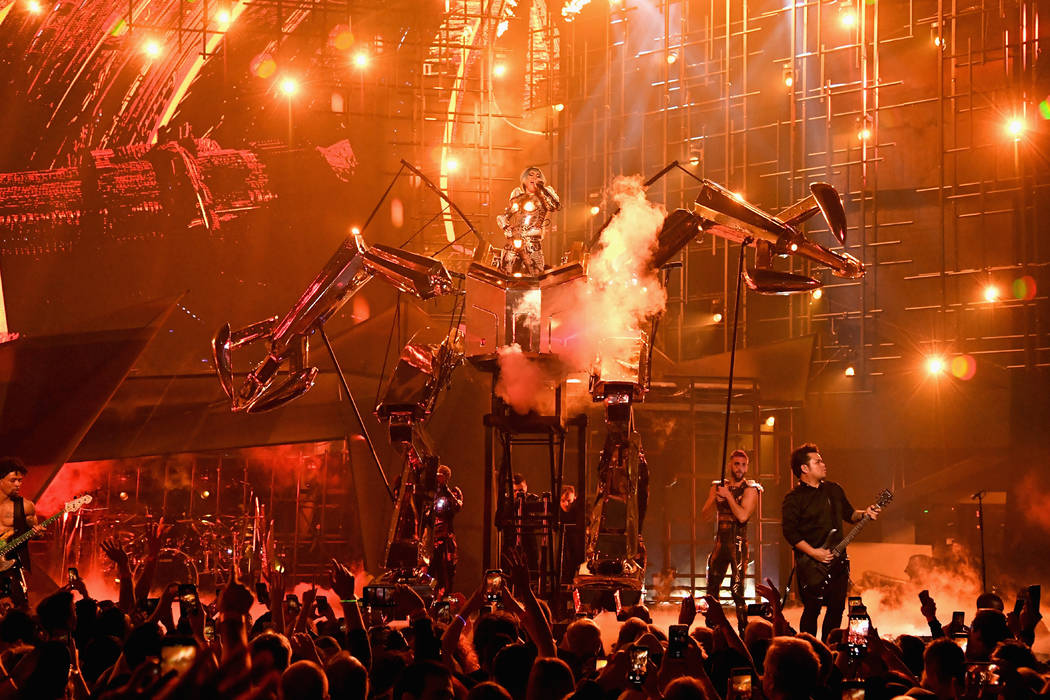 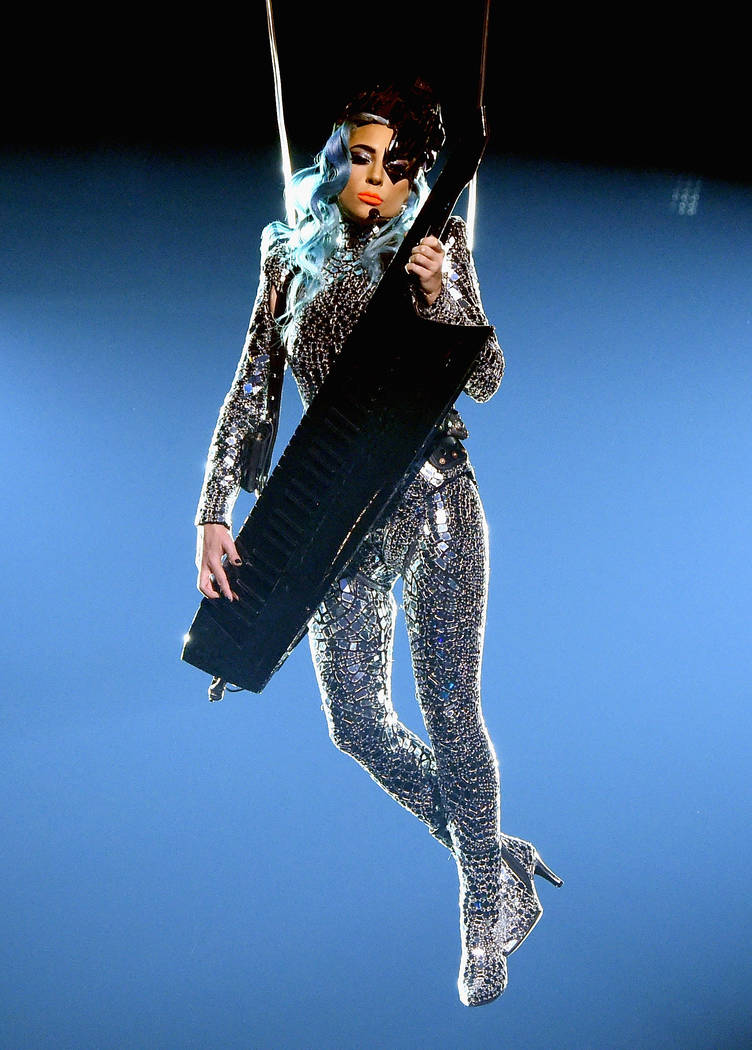 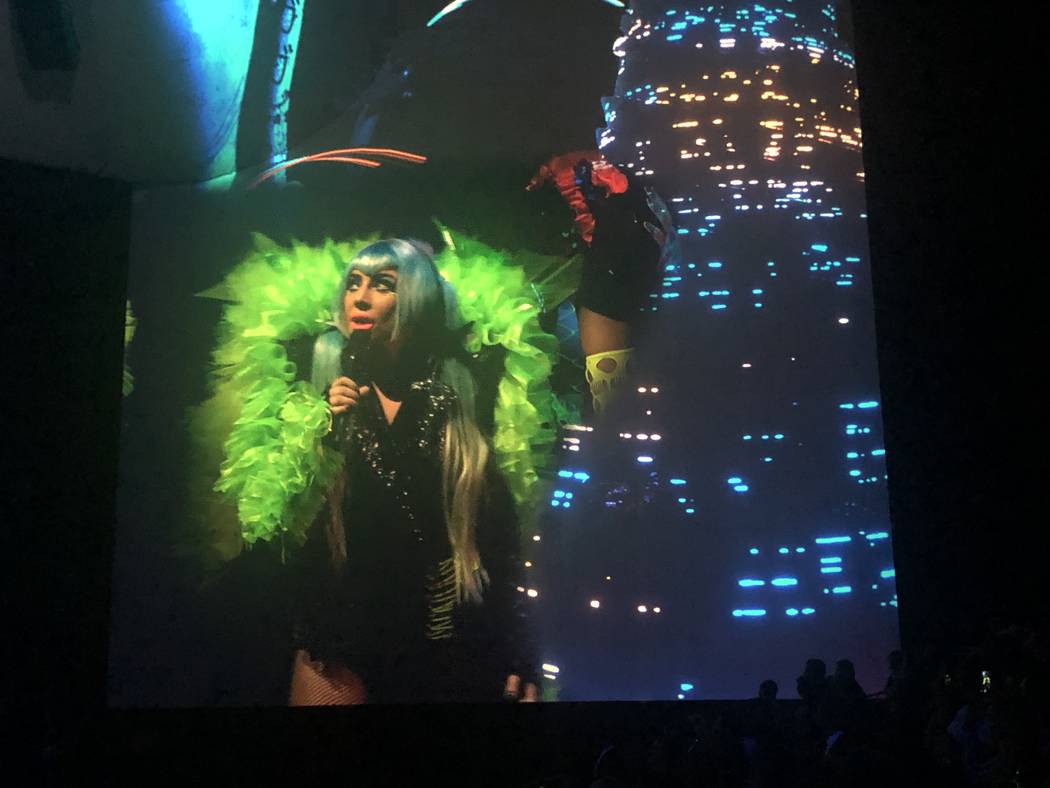 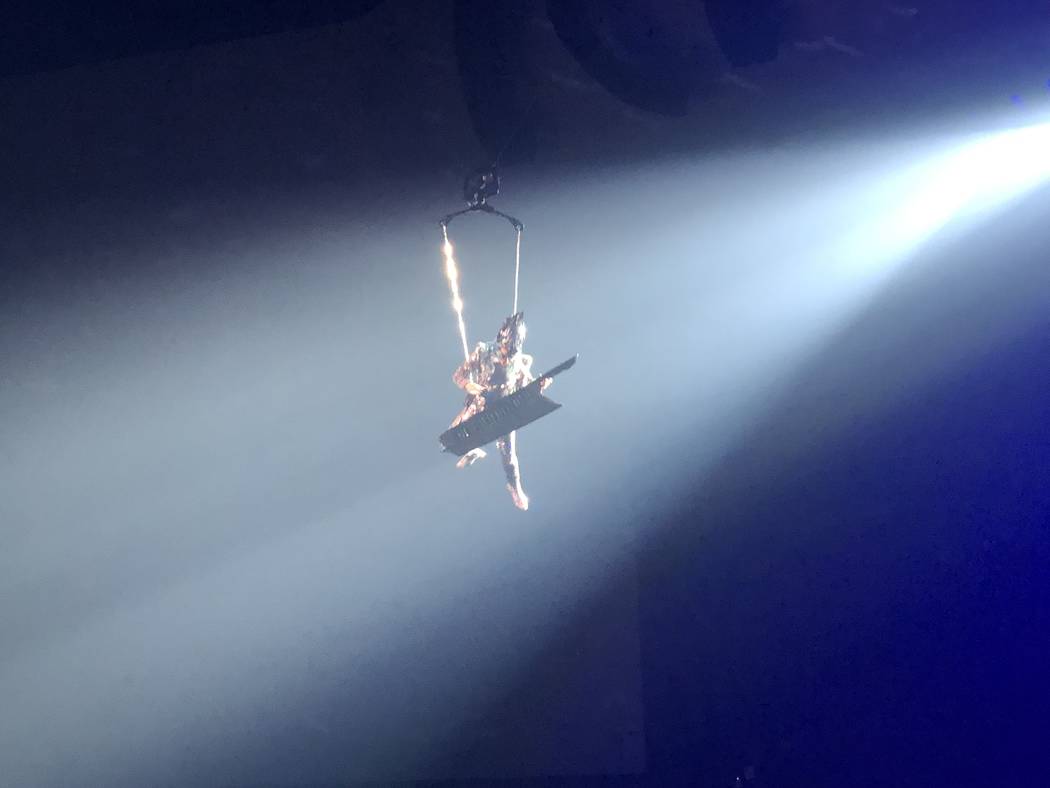 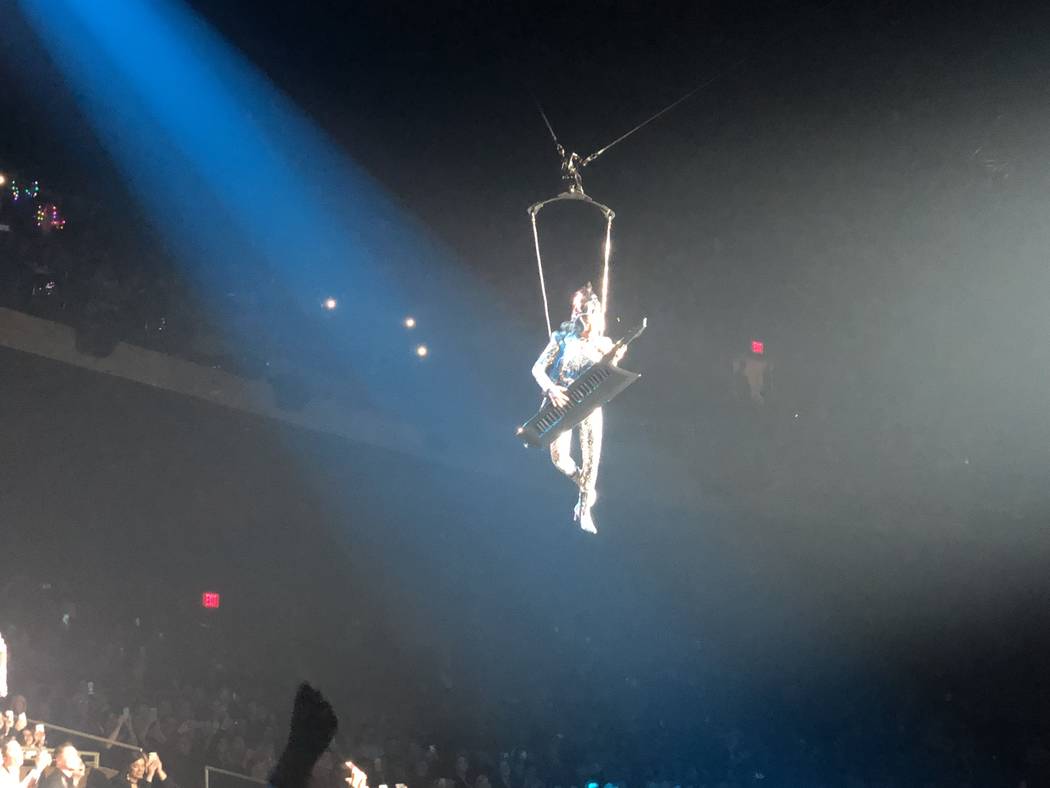 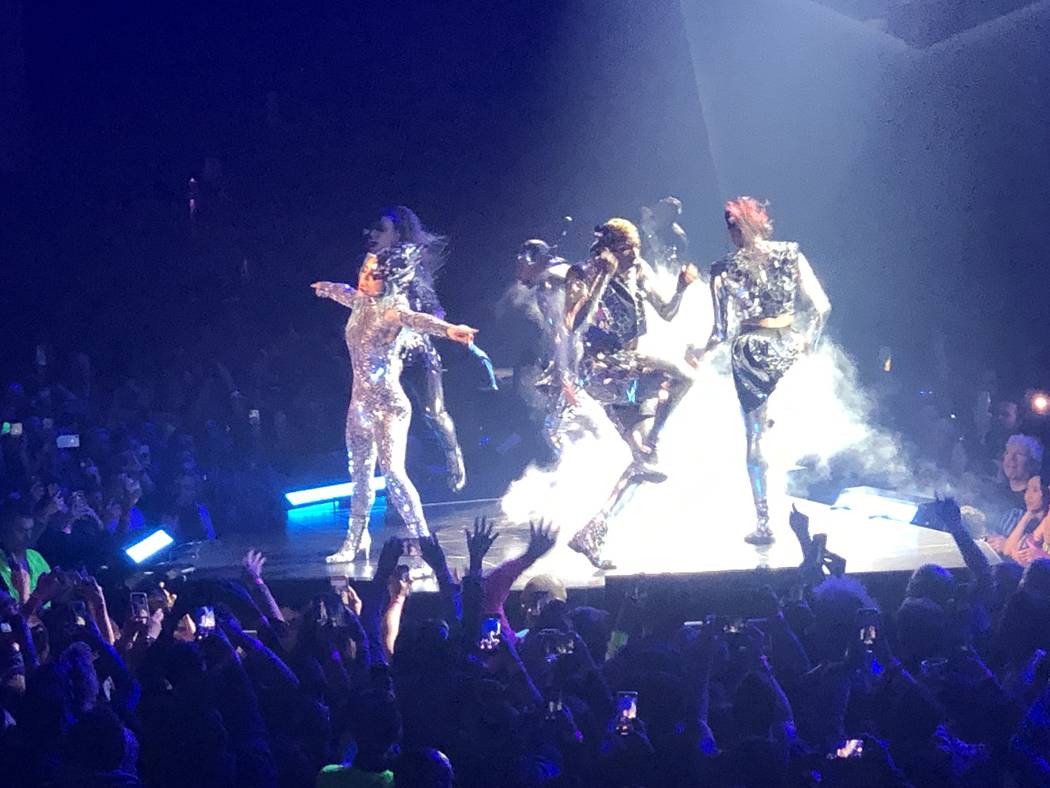 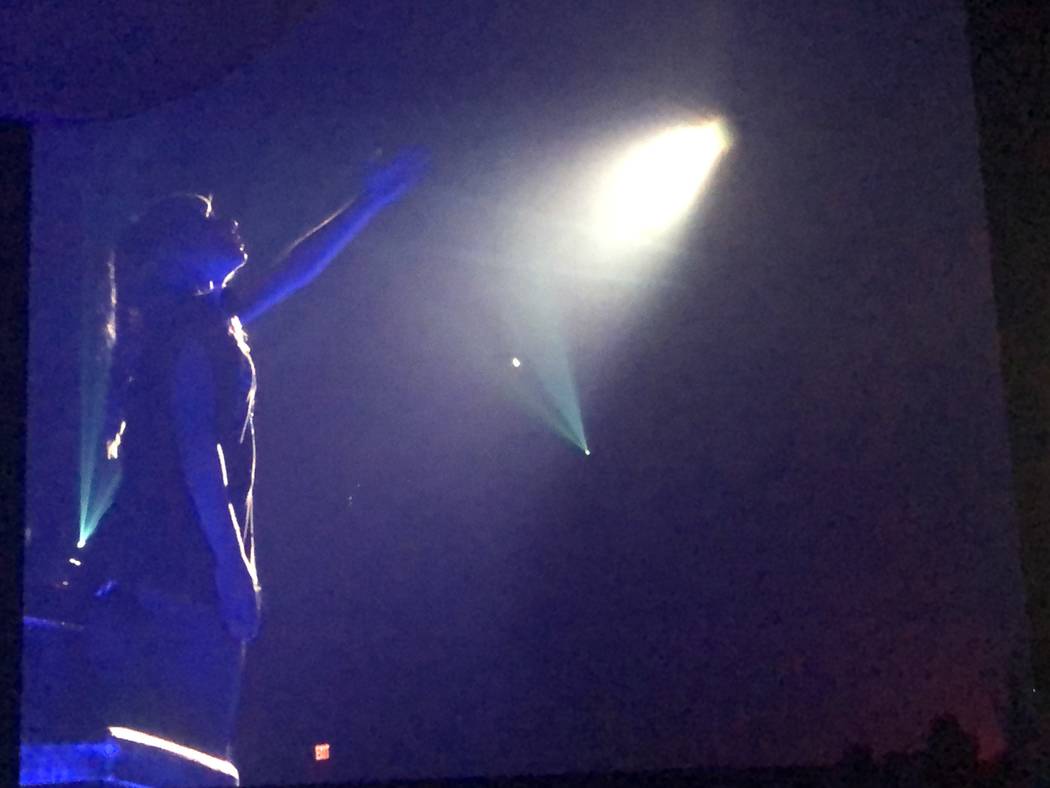 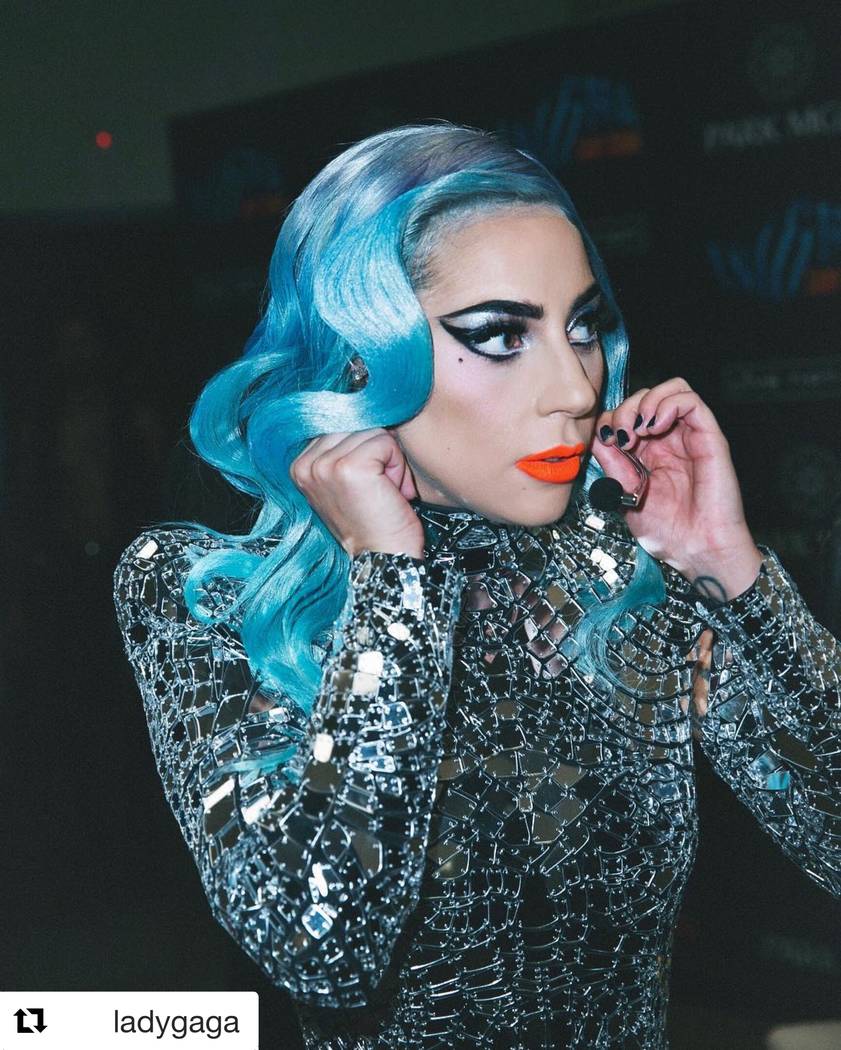 An Instagram shot of Lady Gaga just before taking the stage for her opening night at Park Theater on Friday, Dec. 28, 2018. (@LadyGaga Instagram)

Lady Gaga took a trek through time Friday night at Park Theater, confiding at one point, “The future is scary, Man.”

The present ain’t exactly a cakewalk, either.

But Gaga spirited away a sold-out crowd of fawning fans for a couple of hours, visiting another time in the far-off distance. “Enigma,” her new residency at Park MGM, is a series of bounding and aggressive production numbers with a sci-fi theme. There are breaks between acts, allowing for costume changes, in this assault of the senses. In the latter segment, the show gears down so Gaga can show off her piano wizardry.

Her mastery on that instrument is displayed under a silver, jagged case for medley punctuated by “Million Reasons” from the 2016 album “Joanne” and “You And I” from the 2011 album “Born This Way.” Her musical skills and training show that Gaga is a real artist. She is dazzling dancing around the stage, a slim figure in a mirrored one-piece to open the night, but her heartfelt playing on the keyboards shows she can move a crowd subtly, too.

But it’s not all nuance. Gaga bursts into the performance from high above the crowd, in a Cirque-fashioned aerial harness for “Just Dance.” She wields a keytar, too. Yes, in a Miracle-On-Ice scale upset, the keytar survives this trip through time. The high-altitude arrival is indicative of a true Vegas spectacle, but because this is Vegas, we have seen it before — Pink spun and soared wildly around T-Mobile Arena in May.

Yet the moment is one of many scenes in which Gaga’s adventurism is on full display, and the crowd of “Little Monsters” — naturally — goes crazy for it.

Throughout, Gaga and her cast of backing dancers and cracking backing band are visited intermittently by an alien figure, named Enigma, on the LED panel at the back of the stage (I imagined this creature as the long-lost Miss Jubilee, after she was abducted from Bally’s and sent to Area 51).

It’s on and out and all over the place and dang I should worn the mirrored bodysuit … @ladygaga #Enigma @parktheaterlv pic.twitter.com/wcJUax6bWu

Gaga has performed the movements in this digital version of herself (she’s shared some of that effort on her social-media feeds). The ongoing conversation between Gaga and Enigma halts the show, and leads Gaga on a sort of voyage crossing outer space. At least, I believe that was the central idea; honestly, most of the crowd seemed more interested in getting up and grooving than the story at hand.

The chat sessions between the star and alternate-universe version of herself is exactly the type of production effect that requires several performances to perfect. That’s why more headliners don’t risk such stops in the action. Gaga, of course, is an exception.

The sci-fi scenes reached their zenith when Gaga hopped aboard a giant, slightly unnerving Transformers-type creature for “Scheiße.” As I tweeted, this is what happens when you’re watching “Transformers” after taking magic mushrooms.

What happens when you ingest psychedelic mushrooms while playing with Transformers … @ladygaga #Enigma @parktheaterlv pic.twitter.com/pVvUOMGOpm

Gaga also summoned a characteristically brazen attitude when demanding her fans near the stage flip her off, asking “Are you telling me to go (expletive) myself?” Followed by, “Only if you cheer for me afterwards!” Then she waded into “Applause,” neatly tying that thought together.

The crowd bought into it, all-in, as we say around here. The outpouring of affection, fist-pumping, dancing, cries of “I love you!” were palpable. The star and her fans share an undeniable bond. Gaga’s “Little Monster” fiefdom was largely built on Twitter about a decade ago. She is still more than OK with her fans sharing the experience via smart phones.

The opening-night scene was peppered with friends of Gaga, including Katy Perry, Adam Lambert, Dave Grohl, actors Orlando Bloom and Jeremy Renner, actress Marisa Tomei, members of Pentatonix, and actress/director Regina King were in attendance. “Dancing With The Stars” judge Carrie Ann Inaba was on the scene, too, and wow can this woman dance (I can verify because she took the seat next to me).

The close was worthy of a superstar, with Gaga taking to the piano once more for “Shallow,” from “A Star Is Born,” the movie for which she is expected to be at least nominated for an Academy Award.

That tune reminded that Lady Gaga is the unique Vegas residency highlighting superstar at her creative and artistic peak. She is the Streisand of today, given her series of top-selling albums and blossoming film career. Gaga also, clearly, sees a Vegas residency as a way to effectively contribute to that legacy. She routinely shouted about being in Vegas, relishing the chance to follow some of the greatest superstars to play the city (her stagecraft and those shimmering, garish costumes hearken to the days of Liberace, Elvis, and through Elton John and Cher).

Though the show’s theme was fictional, Gaga did refer to the present during “You And I” when talking of her series at Park Theater. “I’m sticking around here for two years,” she said. “Maybe three if I’m lucky.”

She didn’t need to consult Enigma at that moment. In Las Vegas, and everywhere, Lady Gaga owns her future.