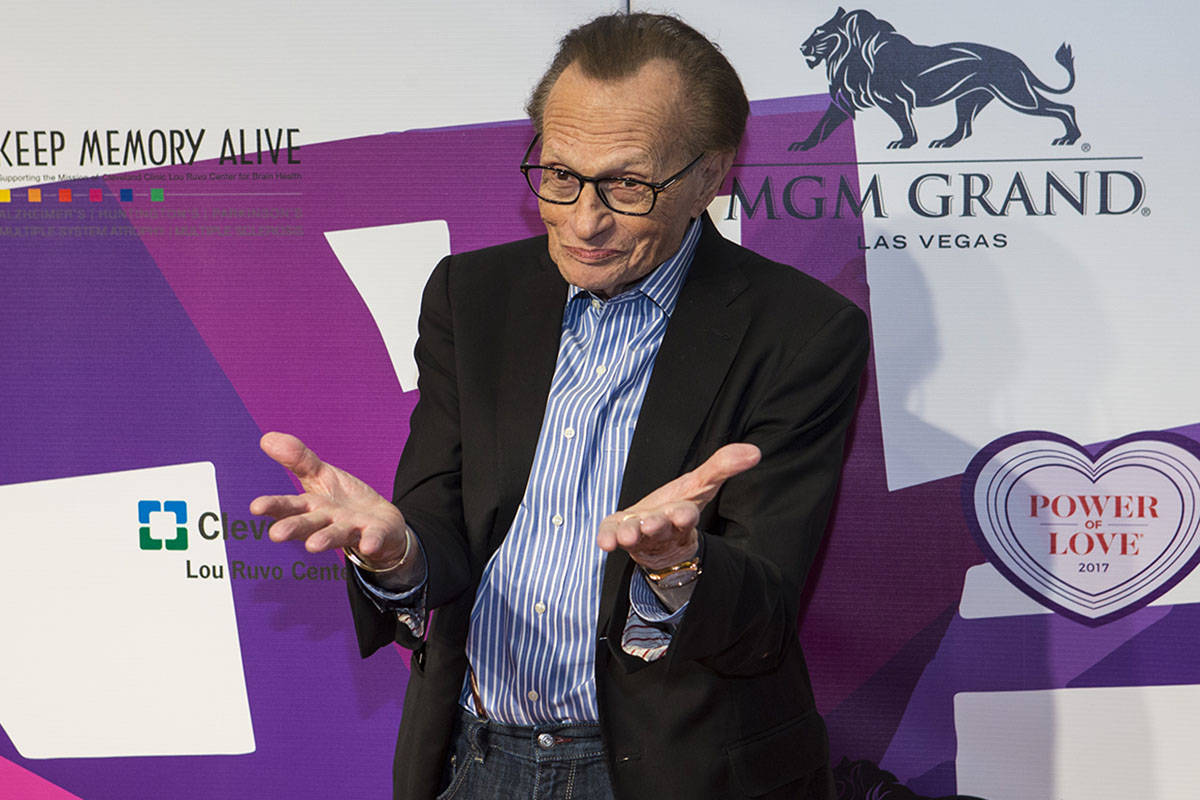 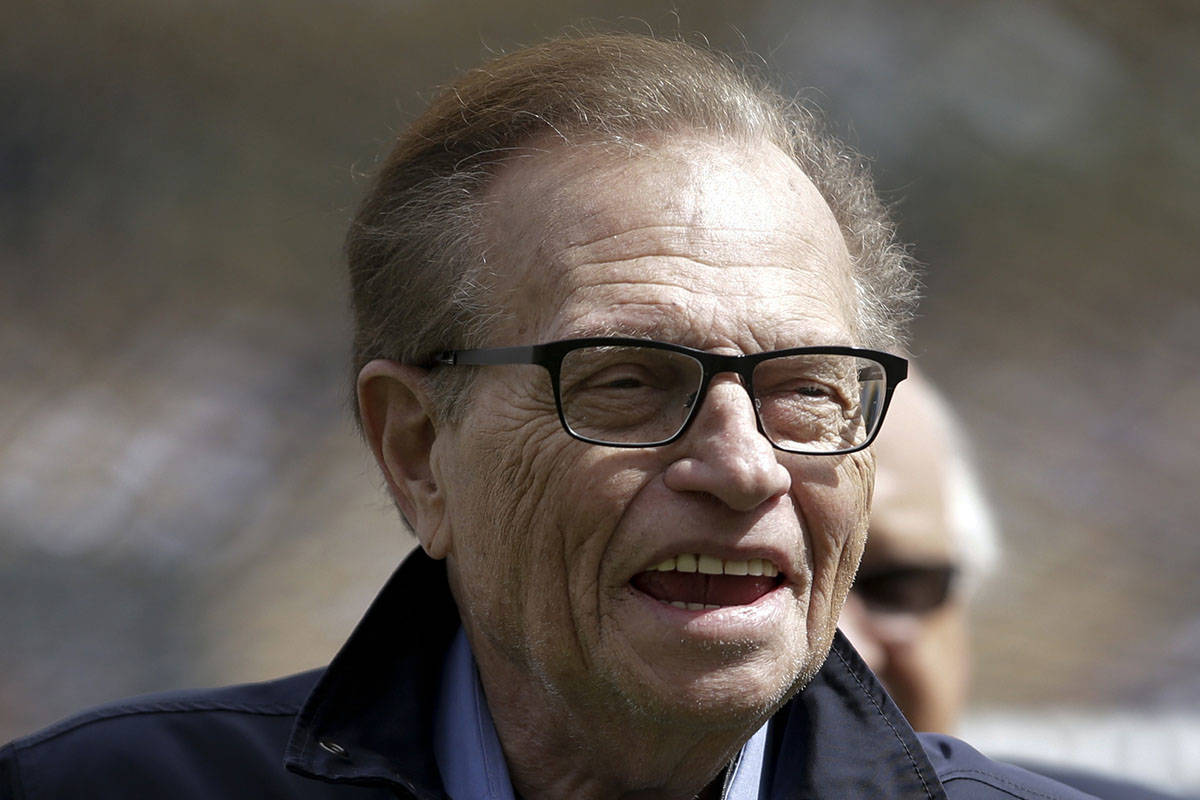 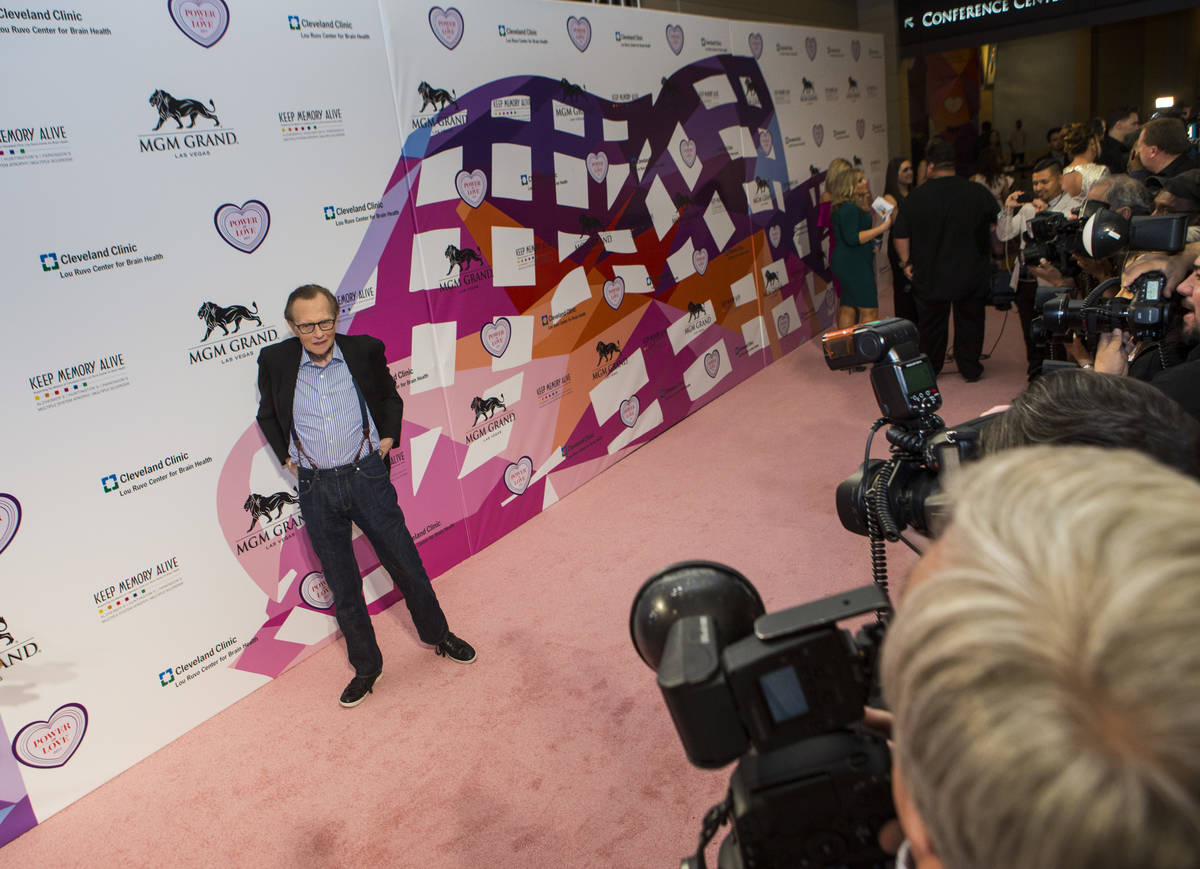 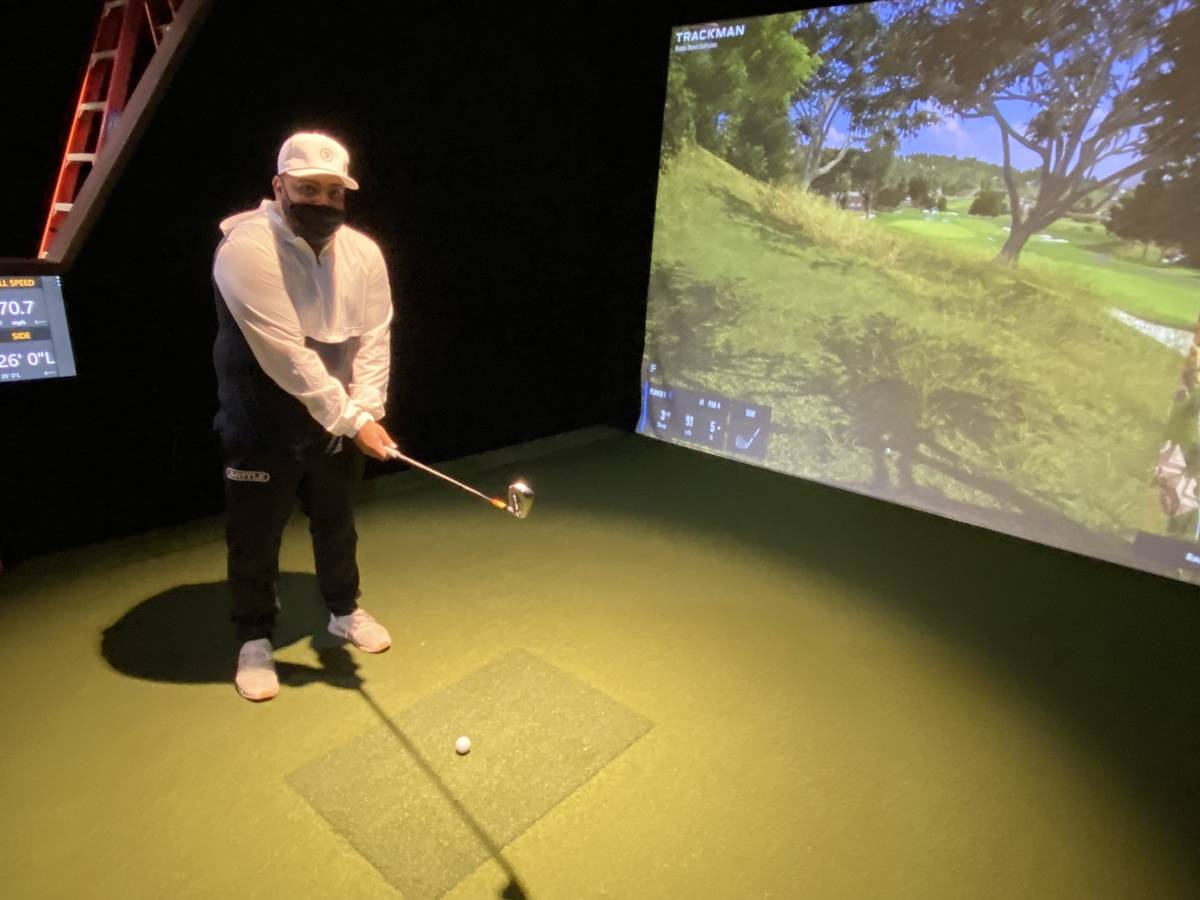 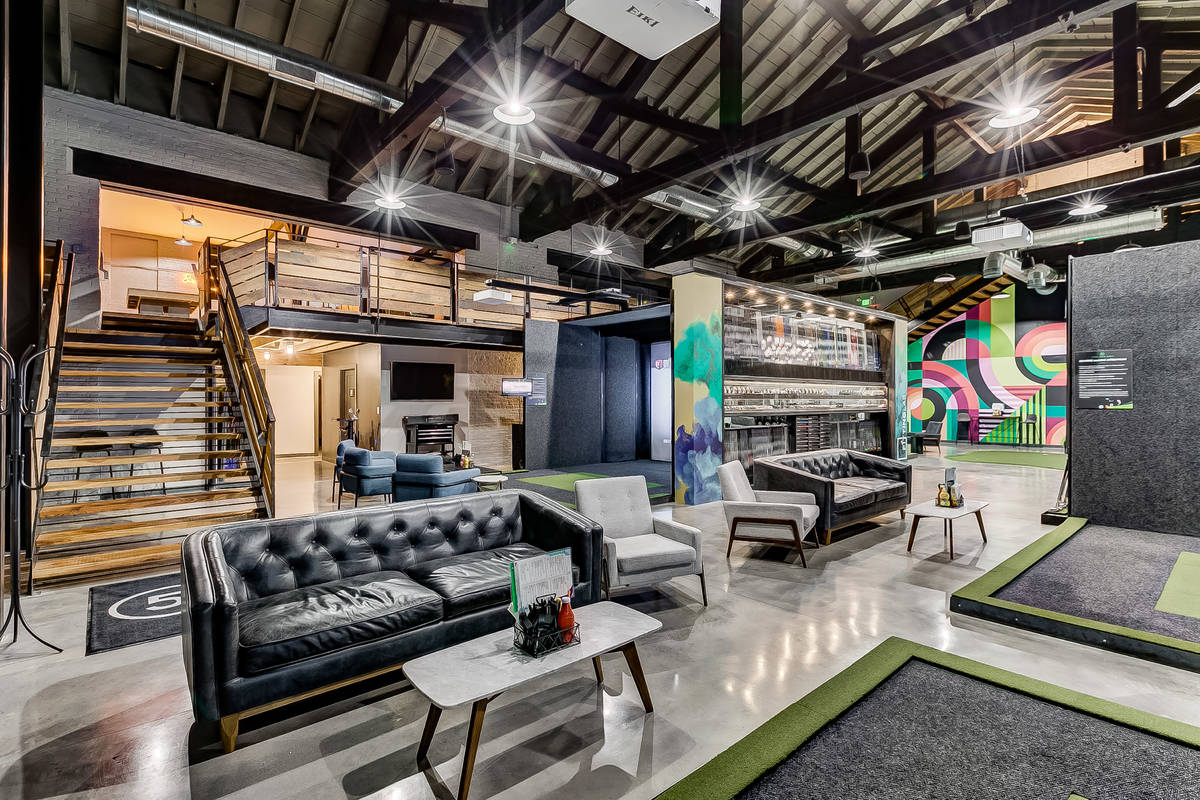 A shot of Five Iron Golf's Baltimore location. The company is opening its first business in the West at Area15 in Las Vegas by February 2021. (Wicked Creative)

Encore Theater was the venue, June 2009 the time, and King’s storytelling the show when King played a one-off for then-resort owner Steve Wynn. That was the same venue where “Monty Python’s Spamalot,” with John O’Hurley in the lead as King Arthur, ran in residency from 2006-08. Danny Gans and Garth Brooks would follow.

In that show, which opened with King’s wife, Shawn, singing a few standards, King covered a lot of territory from his broadcast career. He told dished about celebs, told some jokes and spun some tales that took up to 10 minutes to finish. He capped the night with a Q&A with the audience.

He didn’t duck a question about his worst guest, film legend Robert Mitchum. As King recalled his frustration,“It was all one-word answers, ‘Nope, yep, maybe, yep, yep, nope, yep, nope, yep, nope.’ What about some of the greatest directors you’ve worked with, like John Huston? ‘When you’ve seen one, you’ve seen ’em all.’ Twenty minutes felt like two hours, but afterward my producer said we need to book him again. The ratings went through the roof!”

He also said Marlon Brando kissed him at the end of their first interview. “And, you know, I can’t stop thinking of him!” King joked.

The night was remarkable as it was the first time I’d seen Wynn with his future wife, Andrea Hissom, who attended together. Business tycoon and philanthropist Warren Buffett was in the same row. I also spotted Tom Brady, then of the Patriots, walking quickly through the Esplanade. Quite a night.

In 2010, I ran into King again at the “Rock For The Cure” Nevada Cancer Institute gala at Aria, which he emceed. At the time, such social media platforms as Facebook and Twitter were on the rise and King had just set up his @KingsThings Twitter handle. I asked him how he was adapting to the times.

“It’s like owning a grocery store when AM/PM started. Or having a horse and buggy when cars came out,” he said. “You can’t do anything about it. It’s so spread out, and I’m not sure if the journalism is better. There’s more of it, and everybody’s a journalist now. But it forges more rumors, more heresy, and everybody’s a blogger.”

King then added, “You can’t fight it. Don’t bother trying, either.”

We talked once more at the 2017 Keep Memory Alive Power of Love Gala at MGM Grand. He got a laugh when asked about the award he’d won on streaming show “Larry King Now” on the web network Ora TV.

“I just won a Webby Award, for the best personality on the internet,” said the man who won two Peabody Awards and 10 Cable ACE Awards in his storied career. “But where is it? Where is the internet? I can’t find it … but it is what it is.”

As they say in the pro shop, heads up for a new golfing/nightlife annex moving into Area15. Five Iron Golf is just a birdie putt from Wink World on the indoor entertainment’s second level. The company’s first golf (themed) club is expected to be open within the week.

We took a look at the under-development, 6,300-square-foot space Friday. Players can dial up and play such famous courses as Pebble Beach and St. Andrews, with TrackMan simulators giving the experience a genuine feel.

You can also hit off the tops of skyscrapers in major American cities, so apologies for busting a window at what seemed to be the Woolworth Building in Manhattan.

The attraction also has a full bar, big-screen TVs for the occasional PGA Tour event or even Super Bowl, shuffleboard and more amenities. Further coverage later in the week. Meantime, I’ve got a window to repair.

“Late Night Magic” is the next show opening at Alexis Park, lifting the lid Saturday night. The adult show presents “the dark, taboo, hilarious and even sexy side of magic and illusion,” according to a press release announcing its opening. The production runs 10:30 p.m. Fridays and Saturdays, spotlighting a rotation of four top magicians.

Leferovich co-created the show with fellow magician Michael Mayfield, seeking to ditch the “family friendly” designation for Vegas magic shows and appeal to grown-ups. Good to know. Time to break out the wingtips and zoot suit.

Like a sports bettor not wanting to jinx his action, Brian Newman waited until after Joe Biden was sworn in as the nation’s 46th president to revisit his time with Biden at NoMad Restaurant in May 2019. Newman had been hired to play one of Biden’s earliest VIP fundraisers in his presidential campaign.

Newman, Lady Gaga’s longtime bandleader and close friend, posted on Instagram that he watched the ceremony through tears, with his family nearby. His message: “I am so proud and inspired to hear all the eloquent messages of equality, love, truth, empathy, optimism and compassion for ALL Americans no matter our race, religion, politics or sexuality. It’s a long road, but it is time for the healing and rebuilding of our Great Nation. Congratulations and thank you to the President of the United States @joebiden & Vice President @kamalaharris !! That was truly beautiful.”

Newman has referred to the event as an “audition” for his “After Dark” residency at NoMad Restaurant. He passed, opening three weeks later.