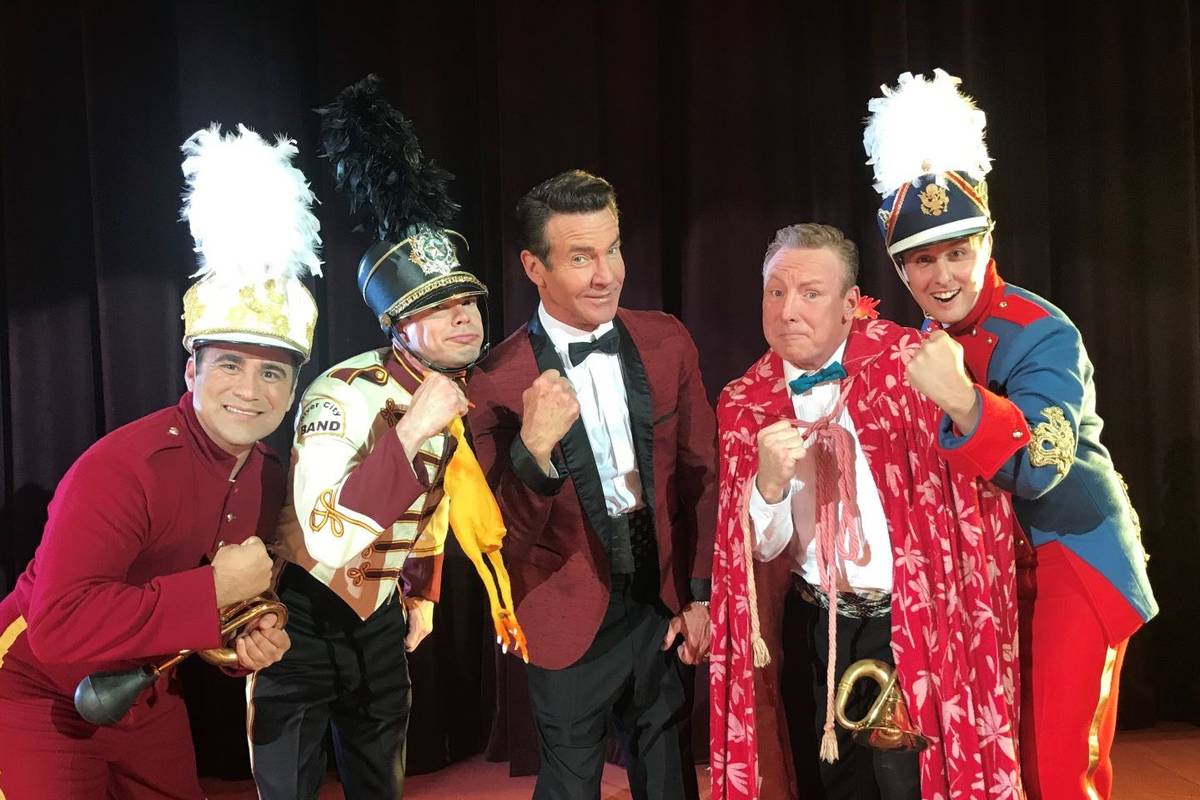 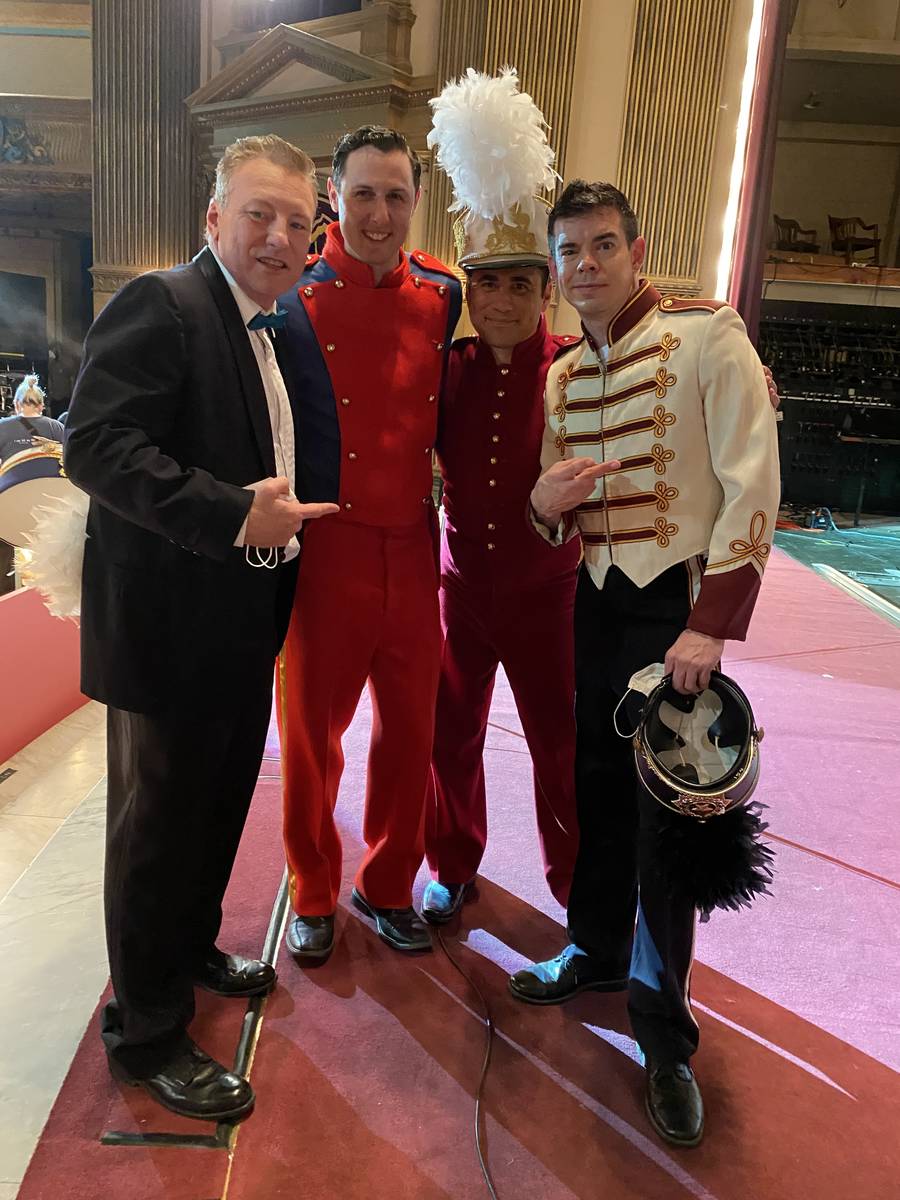 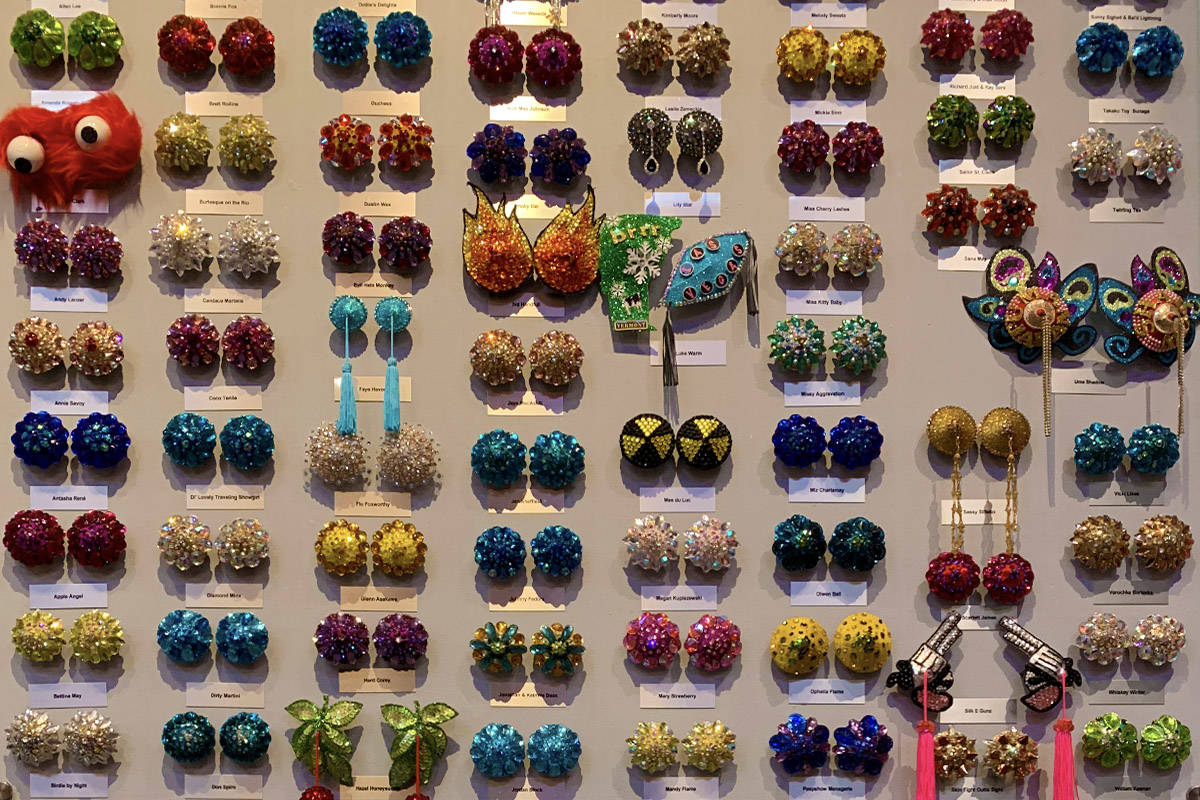 A wall of vintage pasties at the the Burlesque Hall of Fame in Las Vegas. (Las Vegas Review-Journal) 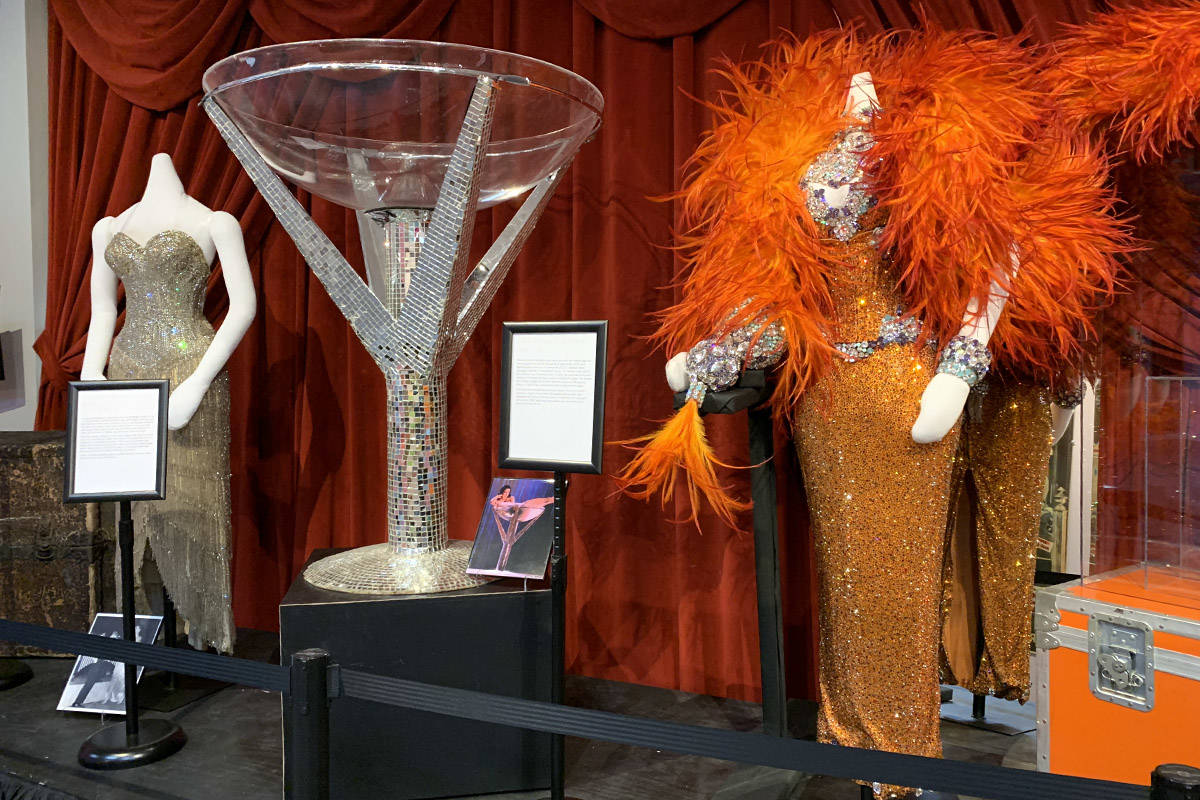 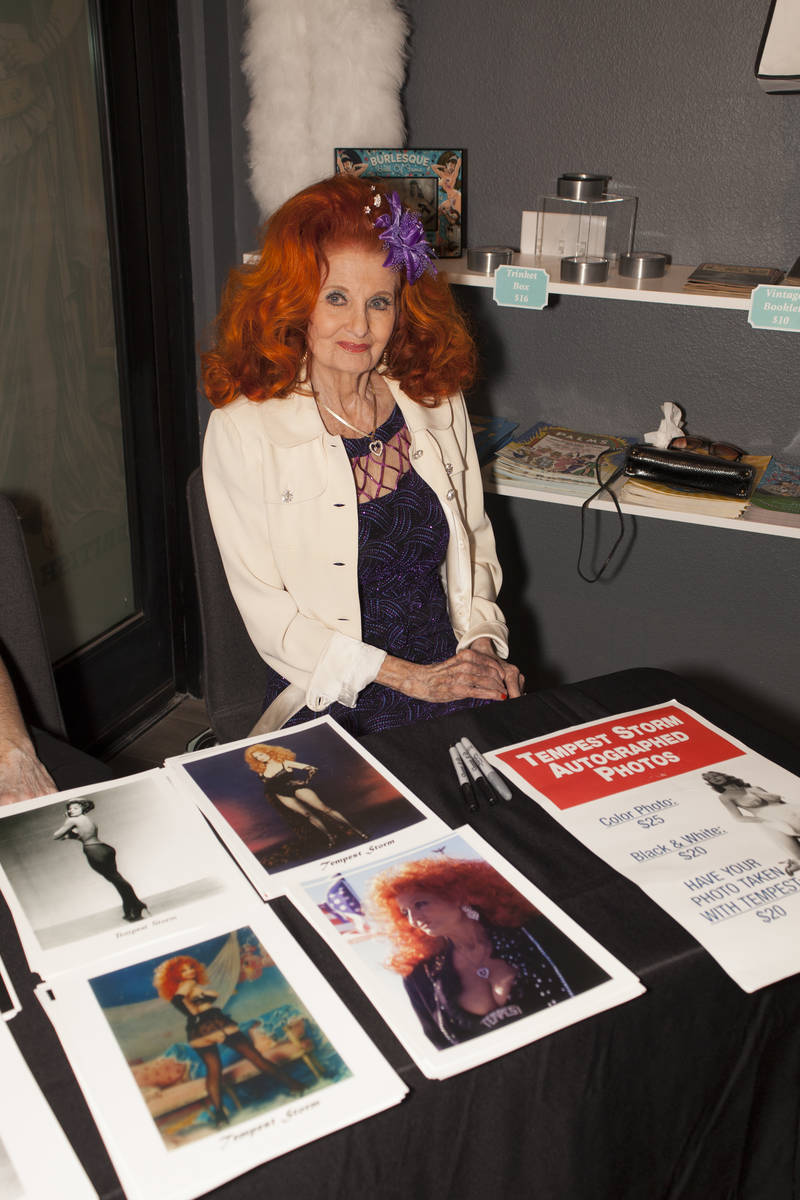 Burlesque legend Tempest Storm is shown during the opening of the Burlesque Hall of Fame in downtown Las Vegas. (Bettina May) 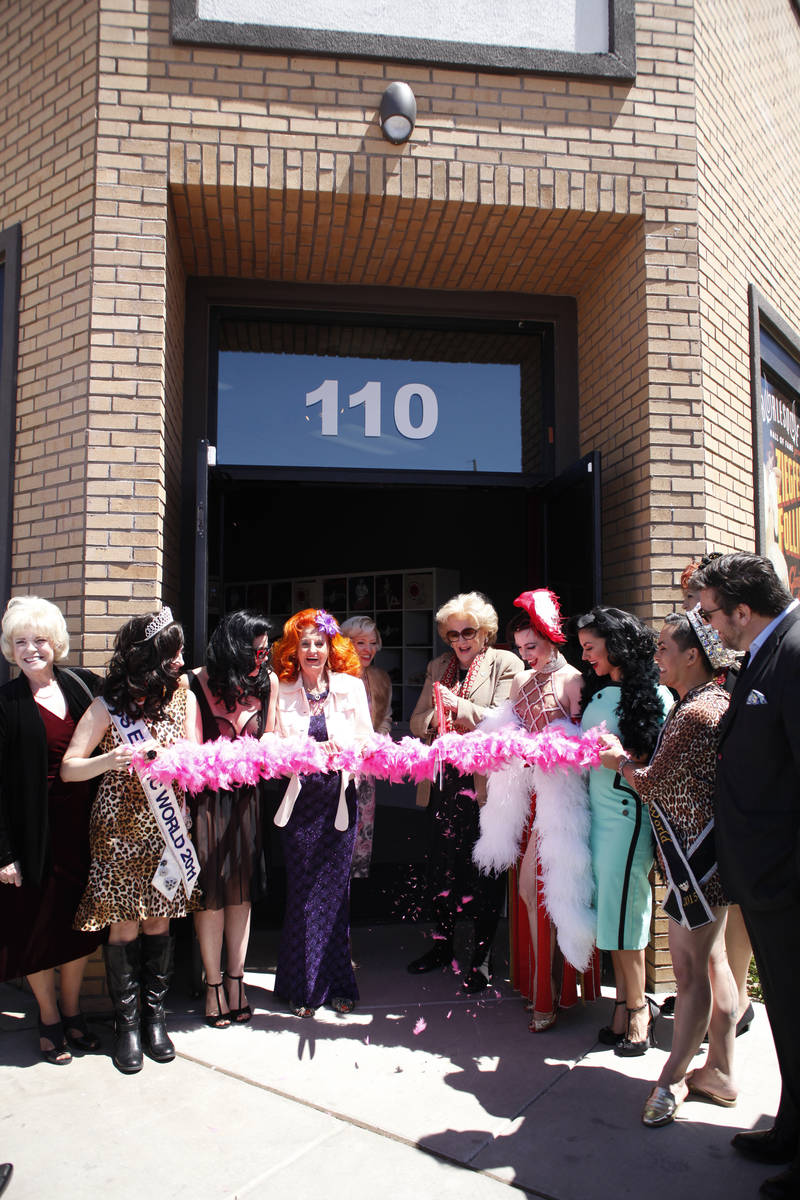 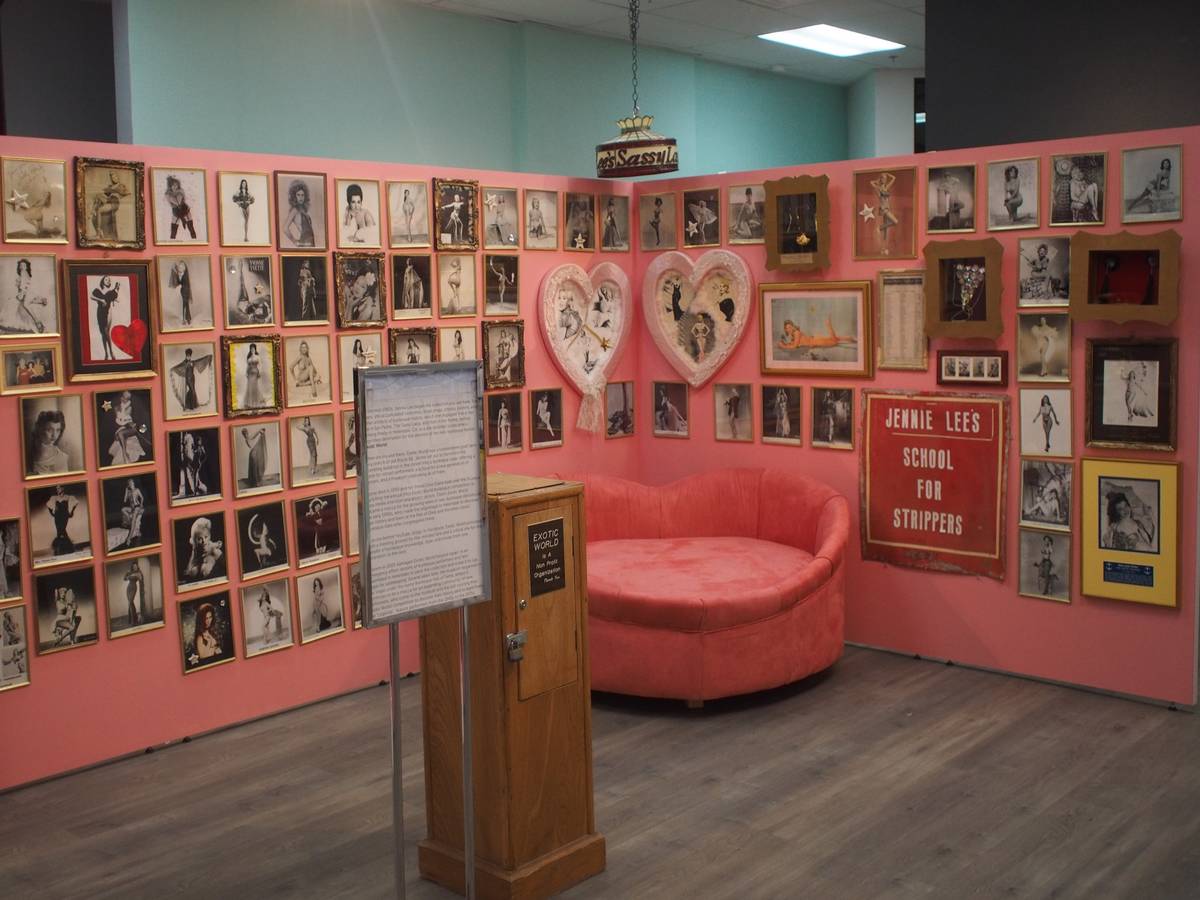 In real life, a young Butch Bradley watched Don Rickles, Rodney Dangerfield and Shecky Greene at Resorts International in Atlantic City. In the movies, Bradley is sharing the stage with Ronald Reagan at the New Frontier hotel-casino showroom.

The lead headliner at L.A. Comedy Club at The Strat is swapping lines with Dennis Quaid, as Reagan, in the upcoming biopic “Reagan,” set for wide release in 2022. Bradley is cast as one of the Continentals, a Vegas vocal quartet that appeared with the future president at the New Frontier’s Ramona Room in 1954.

“I was the leader of the Continentals, and the director, Sean McNamara, said, ‘I really want you and Dennis to improv the scenes,’ ” Bradley said in a phone chat Thursday. “So we did three scenes, I worked the crowd with Mrs. Reagan (Penelope Ann Miller) in the audience. It’s like, my life always comes back to Vegas.”

This is true even though the scene was filmed on a soundstage in Guthrie, Okla., custom-built to match the New Frontier room. Kevin Dillon (Jack L. Warner), Skip Schwink (Jimmy Carter) and Mena Savari (Jane Wyman) are also cast.

The film is among Bradley’s many projects during the pandemic. If there can be a winner in COVID, he is one. The comic has built a hot residency at L.A. Comedy Club, able to perform safely and effectively as the venue has reopened. He’s onstage

A three-year Vegas resident, Bradley has been awarded at the city’s top comic in the R-J’s annual “Best Of” listing. He’s just launched a widespread special “Butch Bradley: Live From Las Vegas.”

The show was recorded at The Strat and co-produced and directed by McNamara and project partner David Brookwell, with filmmaker Todd Fisher (the Las Vegas-based son of Debbie Reynolds and brother of Carrie Fisher), actor-filmmaker Erik Audé. The concert film is streaming on Amazon Prime, AppleTV and Google Play.

Bradley is happily accustomed to the nightclub environment. He grew up in Atlantic City, where his mother, Claire Bradley, worked in the casinos, first as a “cage girl” at Resorts International. “She would be buried in money, up to her neck, and had to count her way out,” Bradley said. “That’s how much money they were making.”

Bradley was in the audience for many entertainment greats, especially headlining comics.

“I remember when I was 9-years-old, watching Rickles just annihilating the front row,” Bradley said. “Rodney and Shecky just destroyed the place. I remember the crowd laughing so hard that I couldn’t hear anything. These were amazing, incredible things they did. Being part of that is in my blood.”

.@Imaginedragons get together to perform “Follow You” on A Late Show! #LSSC pic.twitter.com/y4c64ut1tR

Las Vegas-launched rockers Imagine Dragons have sharpened their Tyler Robinson Foundation fundraising campaign with “Slay Cancer With Sabers.” The band is inviting supporters to compete in a virtual Beat Sabers virtual-reality tournament in partnership with the online charity clearinghouse The Charity Gurus.

The event started Thursday and is capped by a live-streaming event June 5.

To register and for the rules of engagement, go to slaycancerwitihsabers.com. Donations are $8 (in line with TRF’s eighth anniversary), with money going to the pediatric cancer organization. To play, fans need to purchase Beat Saber and a VR headset (for info about the VR game, go beatsaber.com). Over the years, TRF has provided support to more than 1,500 families internationally, and raised more than $10 million. The charity and the band are things to support.

It was not a formal Las Vegas Philharmonic event, but they are all LV Phil players. The song is great, too. It grooves.

Burlesque back in action

The Burlesque Hall of Fame is reopening April 2 at its permanent home in the Arts District at 1027 S. Main Street. Hours are 11 am.-5 p.m. Fridays and Saturdays, with guests directed to make reservations at bhof.link/admission. Walk-ins are accepted only when reserved slots are open. Guests arrive on a timed-entry system, limited to six admissions per hour. All COVID-compliant protocols are in place.

BHoF, as it is known in shorthand, is the largest formal collection of burlesque items in the world. Burlesque trailblazer Dixie Evans famously operated the original Exotic World Burlesque & Striptease Hall of Fame collection abandoned goat farm in Helendale, Calif., on a dirt parcel on Route 66 between Barstow and Victorville. She brought the collection to Vegas in 2006.

Today in Las Vegas,the BHoF displays are thousands of costumes, photos, props and personal items from such legends as Gypsy Rose Lee, Sally Rand, Blaze Starr and Tempest Storm. BHoF President Dustin Wax says to expect a collection of theater marquees and larger items on display in the venue’s temporary space. A new exhibit on Asian-American performers, centering on costumes donated by Coby Yee, opens in May.

James “D Train” Williams headlines Notoriety at 10 p.m. Friday. Universally known as simply D Train, the songwriter/instrumentalist/producer hit No. 1 on the Billboard dance chart with “You’re the One for Me” in December 1981. His backing band is a collection of Vegas vets, with Naomi Mauro on vocals, music director Lenny Underwood and Chuck Barnes on keys, Steven Lee on guitar and Pepe Jimenez on drums.

This should be something special: Las Vegas vocalist Savannah Smith makes her debut this weekend at The Vegas Room, at 6:30 p.m. (dinner) and 8 p.m. (performance) Thursday, Friday and Saturday. Smith has performed with The Moonlighters and Vox Vegas and also in “Vegas! The Show” at V Theater at Miracle Mile Shops at Planet Hollywood. Serious talent here. Smith draws from a wide range of inspirations, among them Shirley Bassey, Melissa Etheridge, Gladys Knight, Nina Simone, Pink and The Beatles. Michael Joy accompanies on piano.