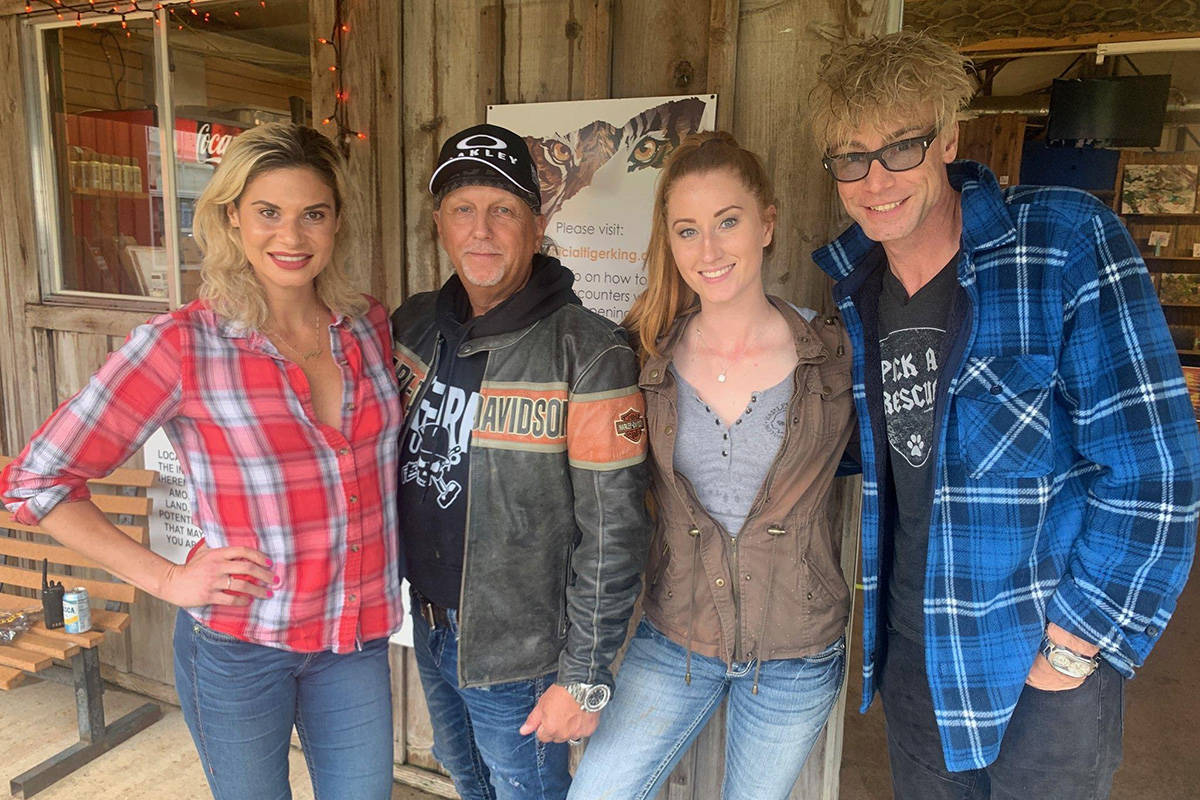 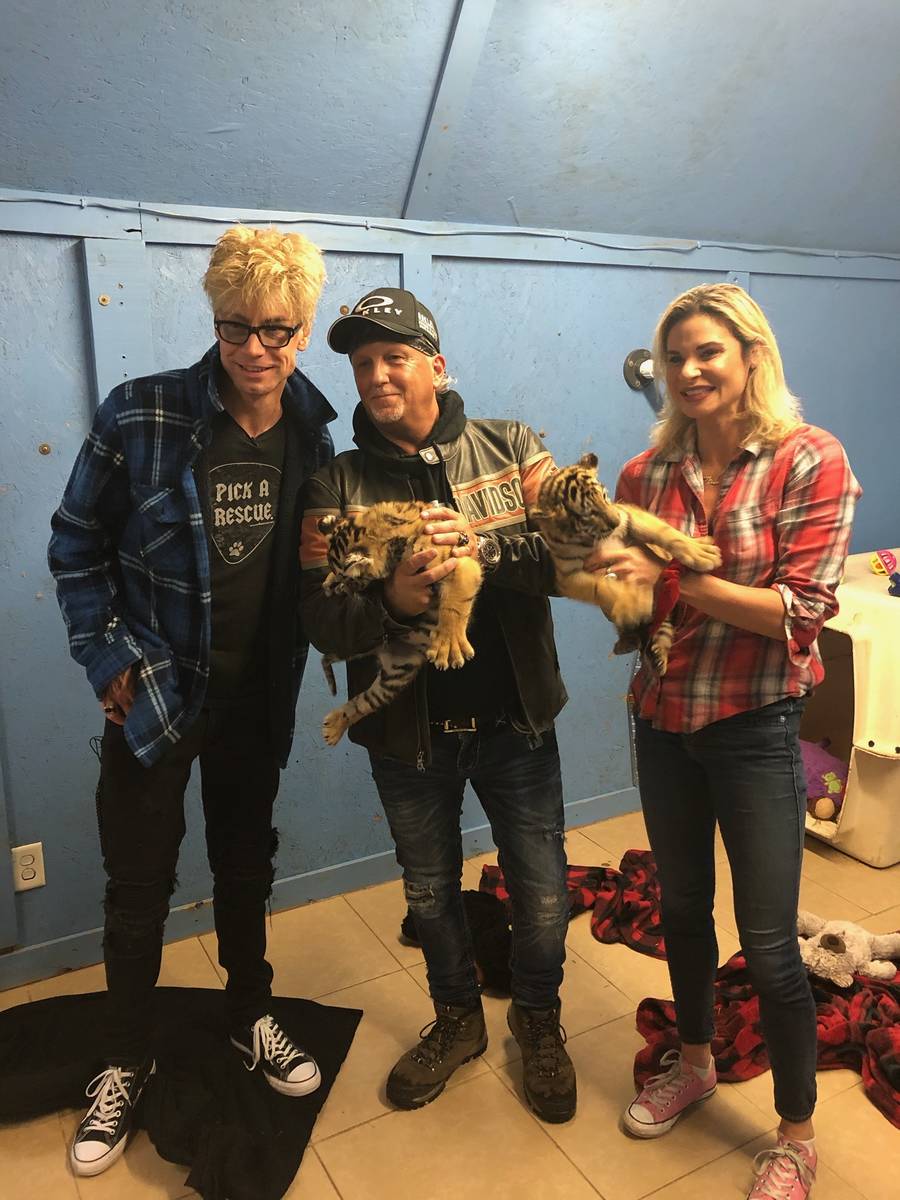 Las Vegas magician Murray Sawchuck and his girlfriend, Dani Elizabeth, are shown with Greater Wynewood Exotic Animal Park CEO Jeff Lowe of "Tiger King" fame during a visit to the zoo on Saturday, May 16 2020. (Murray Sawchuck) 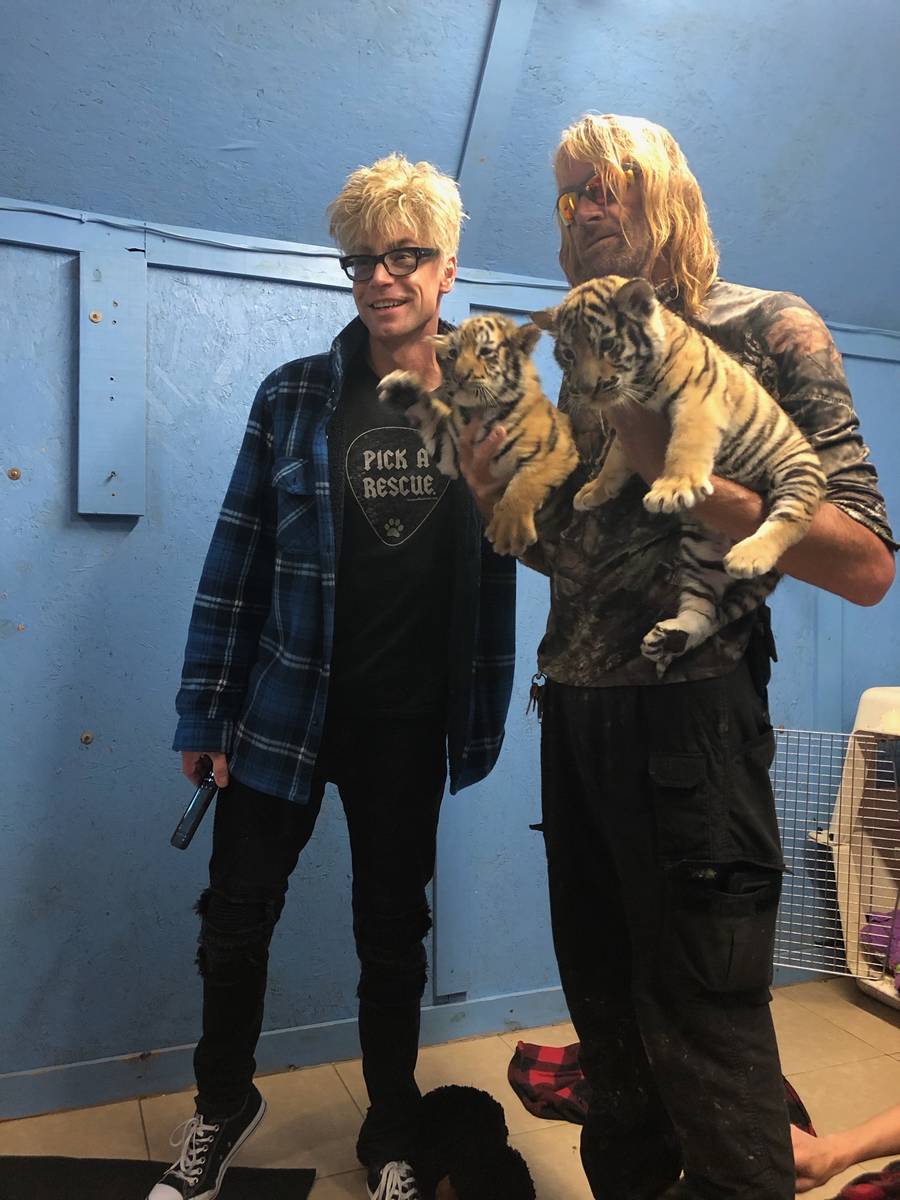 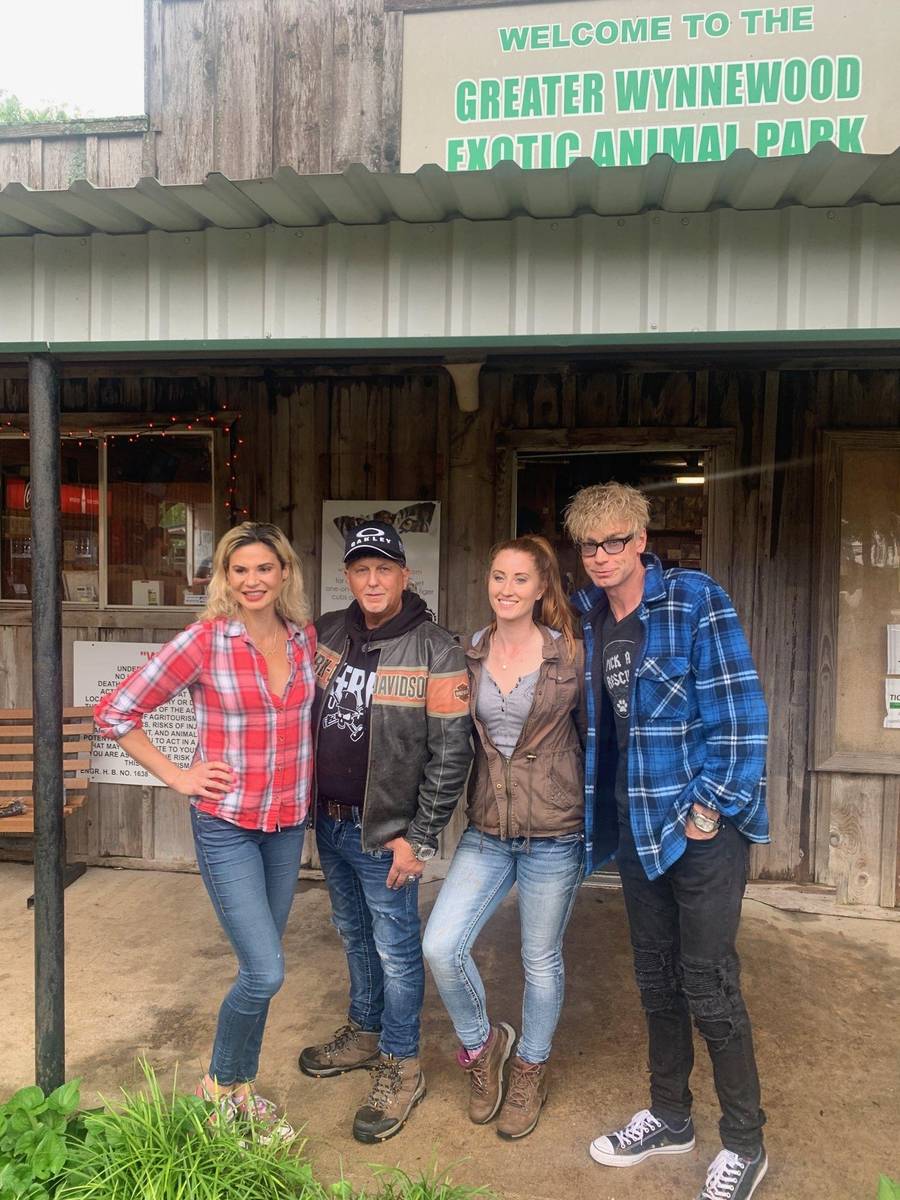 The road can be a jungle for professional entertainers, ladies and gents.

Veteran Las Vegas magician Murray Sawchuck has returned to that zoo, in a real way, to bolster his online presence.

Sawchuck and girlfriend Dani Elizabeth, of “Crazy Girls,” last week visited the Greater Wynnewood Exotic Animal Park of “Tiger King” fame. Sawchuck, the headliner at the Laugh Factory at the Tropicana and a specialty act in “Fantasy” at Luxor, has known that park’s CEO, Jeff Lowe, for about five years.

Why is a Vegas magician hanging around Joe Exotic’s old place? Well, it’s not because Sawchuck is trying to develop a wild-animal act, despite what’s been reported. There’s no cultural or box-office appetite today for an exotic animal show on the Strip. Laugh Factory operator Harry Basil said as much this week, and I agree.

Sawchuck’s show has never featured animals, anyway — he’s used them occasionally with a trainer on TV appearances. He’s also worked on behalf of animal rescue charities. There’s no sense in him driving to Oklahoma to scout tiger cubs for a stage show.

“I’ve always loved animals, and if I weren’t an entertainer, I would have been a marine biologist,” Sawchuck says. “I’m not looking to add animals to my act.”

Rather, Sawchuck’s trip was a way to generate publicity. Murray the Magician, as we know him, is famously adept at self-promotion — he has already hit the mark with a post from TMZ, and generated two interviews from a single Las Vegas network affiliate (KTNV-TV, Channel 13). Score.

Sawchuck’s road excursion was also to seize a chance to record his own mini-documentary on his YouTube channel, with YouTube guru Seth Leach joining the journey and talking at length with many characters from “Tiger King.”

Lowe is featured extensively. Sawchuck reports that Lowe, the man behind Exotic’s ouster, talks at length about the operation in the small Oklahoma town. Exotic, of course, is the central subject of “Tiger King” and still locked up on charges he conspired to murder rival zoo operator Carole Baskin and for assorted animal-abuse violations.

Most recently, Exotic’s reps are attempting to gain a pardon from President Donald Trump.

“We went there to do a YouTube clip, and we came away with enough for a three-part episode,” says Sawchuck, who adds that he was stunned at some of Lowe’s on-camera claims that dead bodies — no joke — remain buried on the property. “Seth was watching this stuff and saying, ‘You know this is all going to go viral, right?’ And Jeff was just fine to talk to us about everything. I was shocked, actually.”

Sawchuck has known Lowe for about five years. Their respective camps are connected in the interlocking world of magic and exotic animals. The two became friends when Lowe and his wife, Lauren, were famously in town in 2017, trying to pitch a tiger cub photo op concept with magician/wild-animal performer Dirk Arthur at Pawn Plaza.

That idea didn’t make it past the initial meeting with Pawn Plaza proprietor and “Pawn Stars” creator Rick Harrison’s reps. Lowe wound up taking that idea to a private residence, where he was cited for operating the attraction without a license, ordered to pay $10,000, then left the city without making that restitution.

The famous zookeeper has reportedly worked a deal to have his four warrants waived in a COVID-19 amnesty initiative and was ordered to return to court June 1.

By then, Sawchuck will have turned his trip to Oklahoma into YouTube gold. And that, folks, is some real Las Vegas magic.