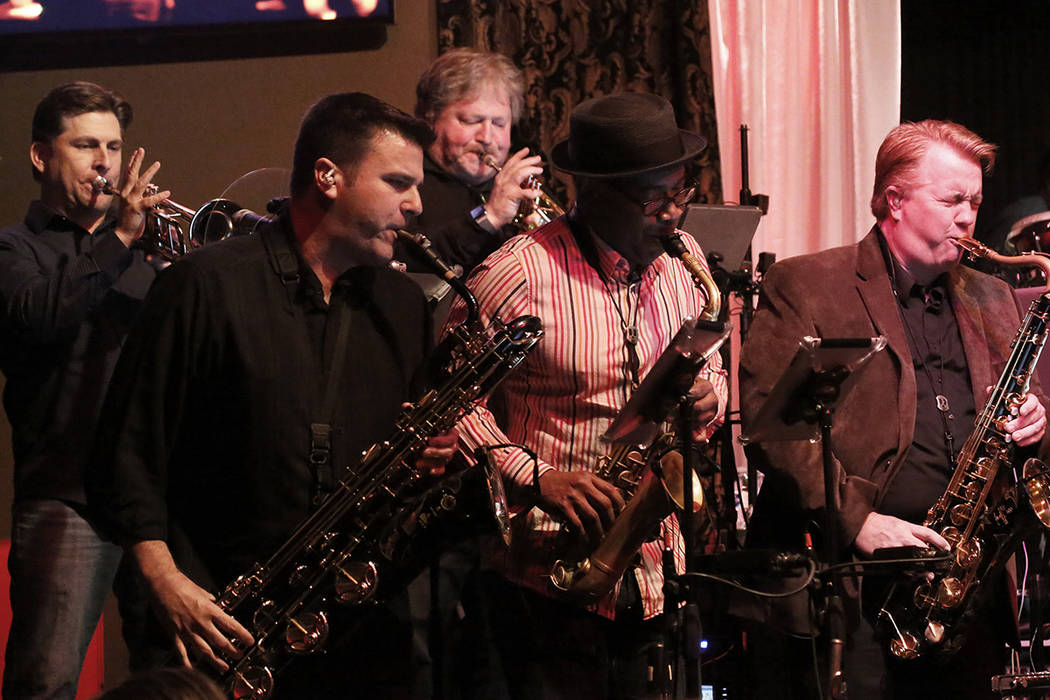 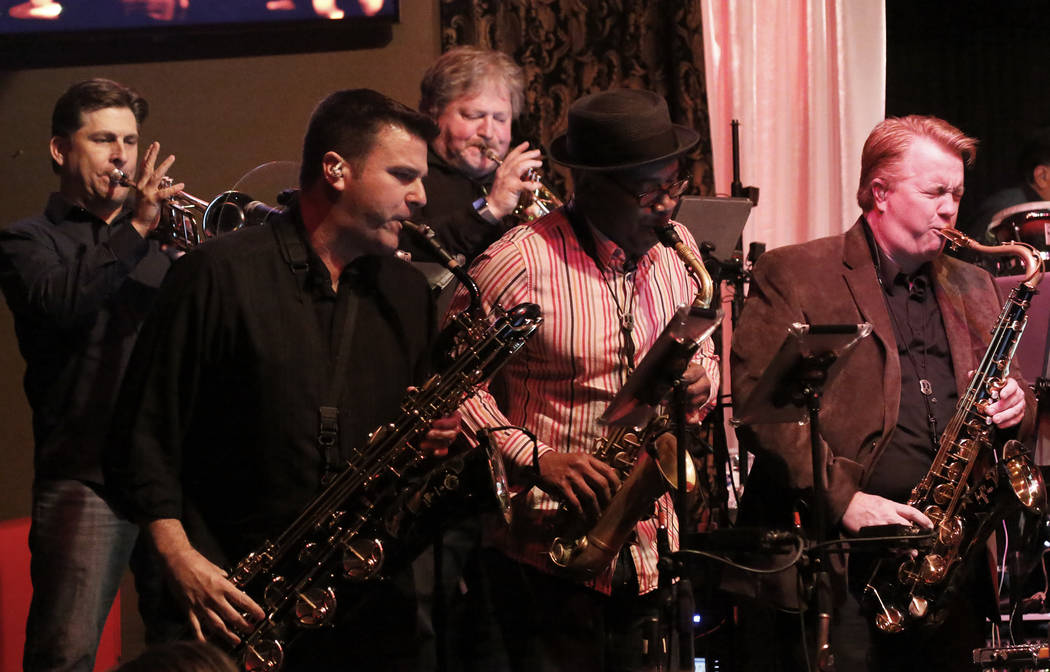 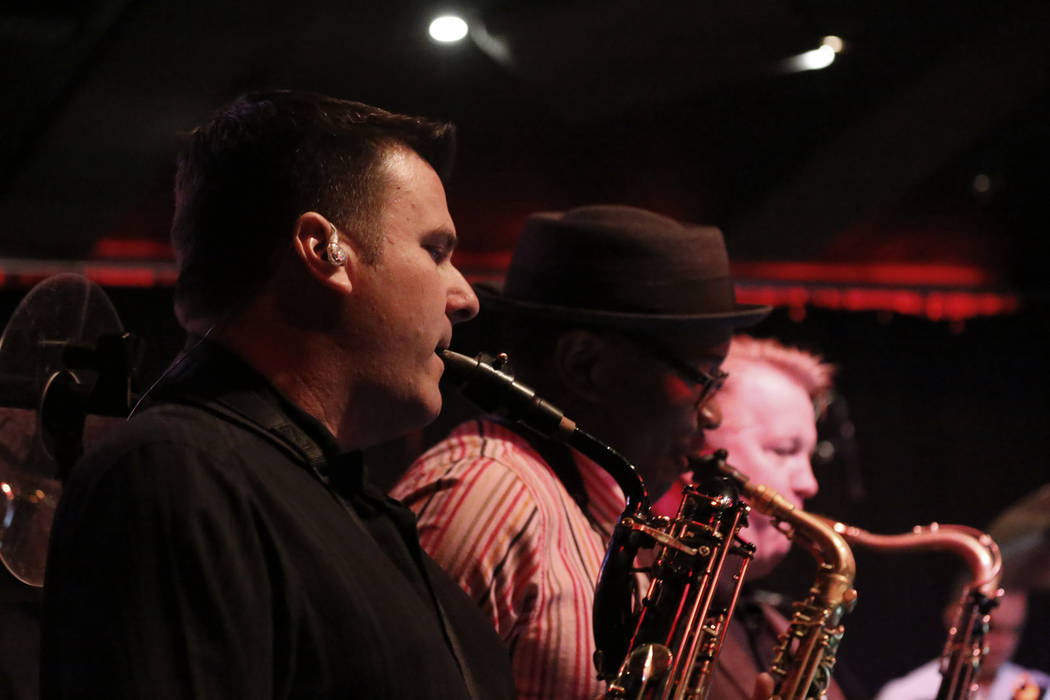 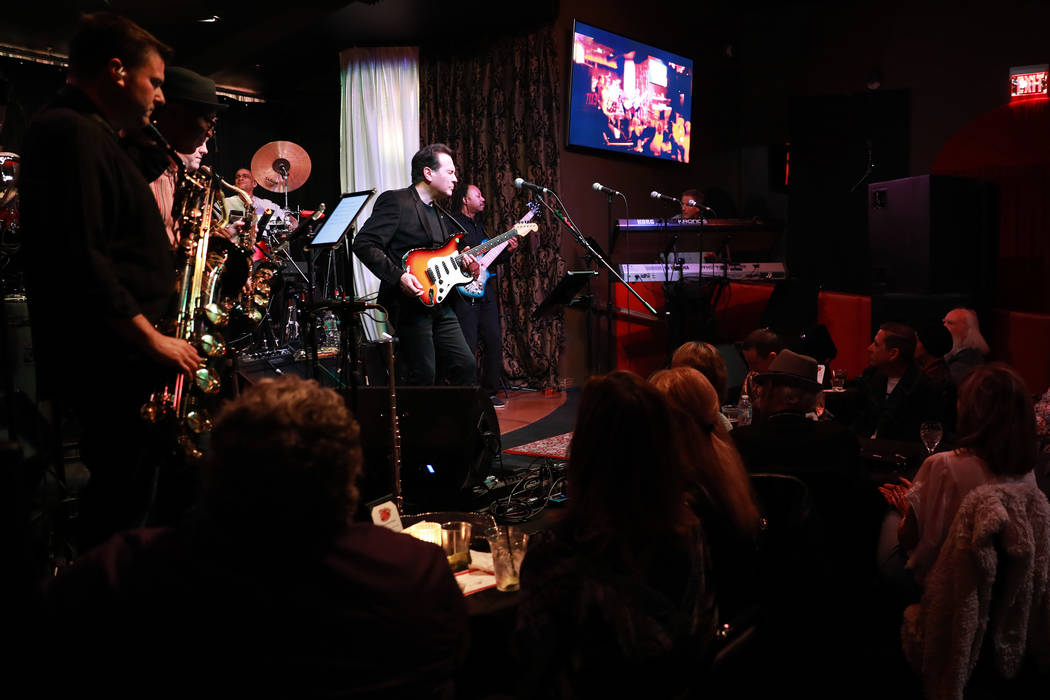 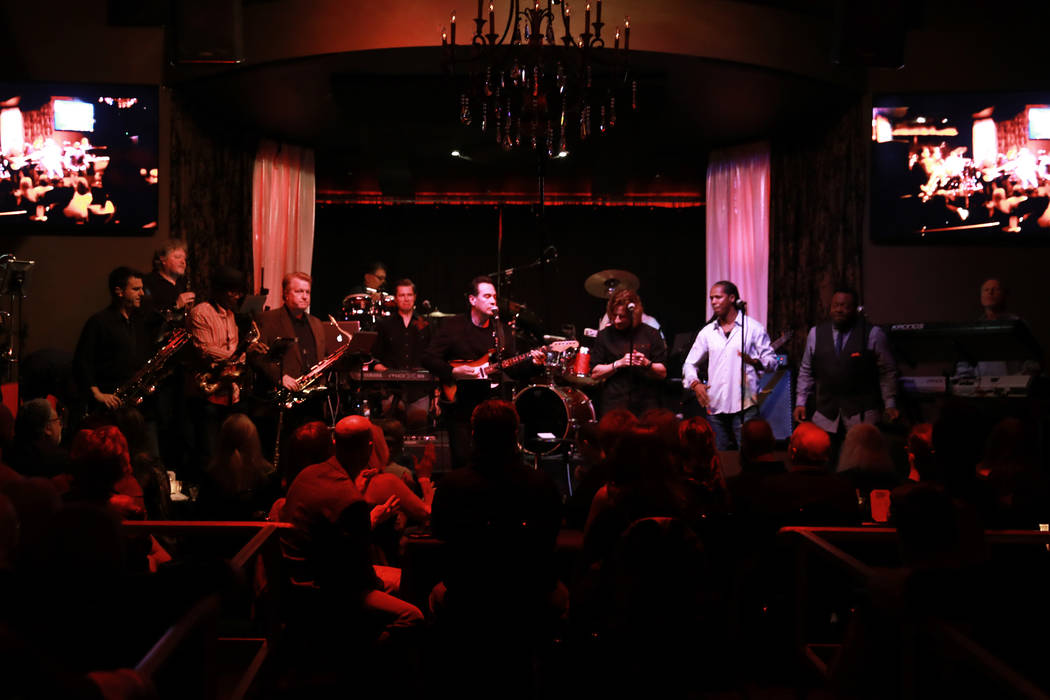 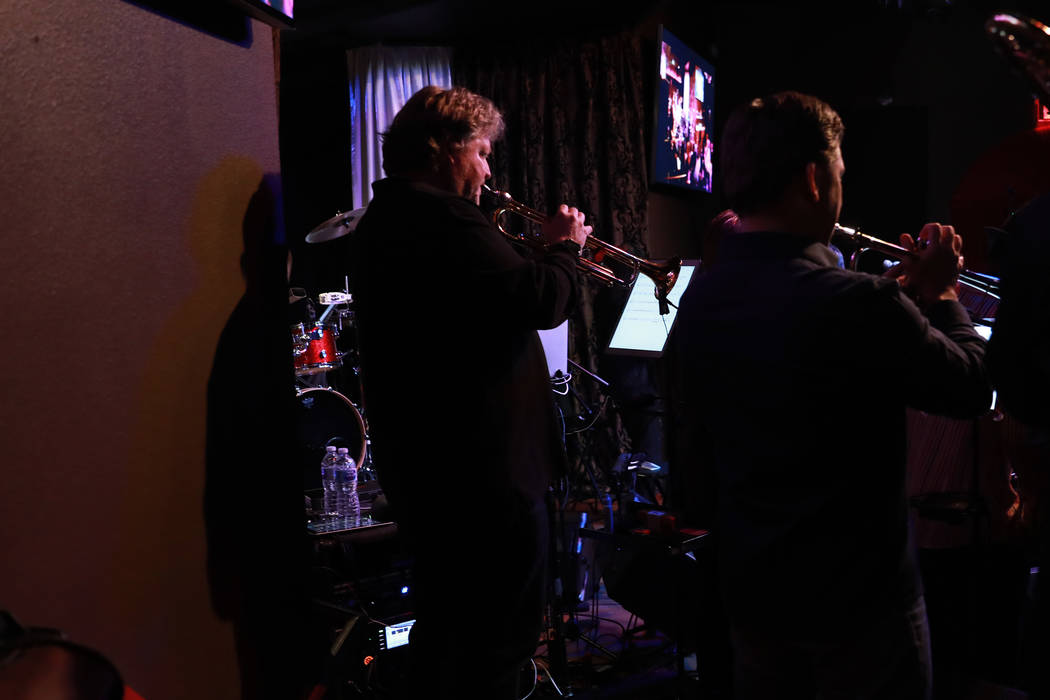 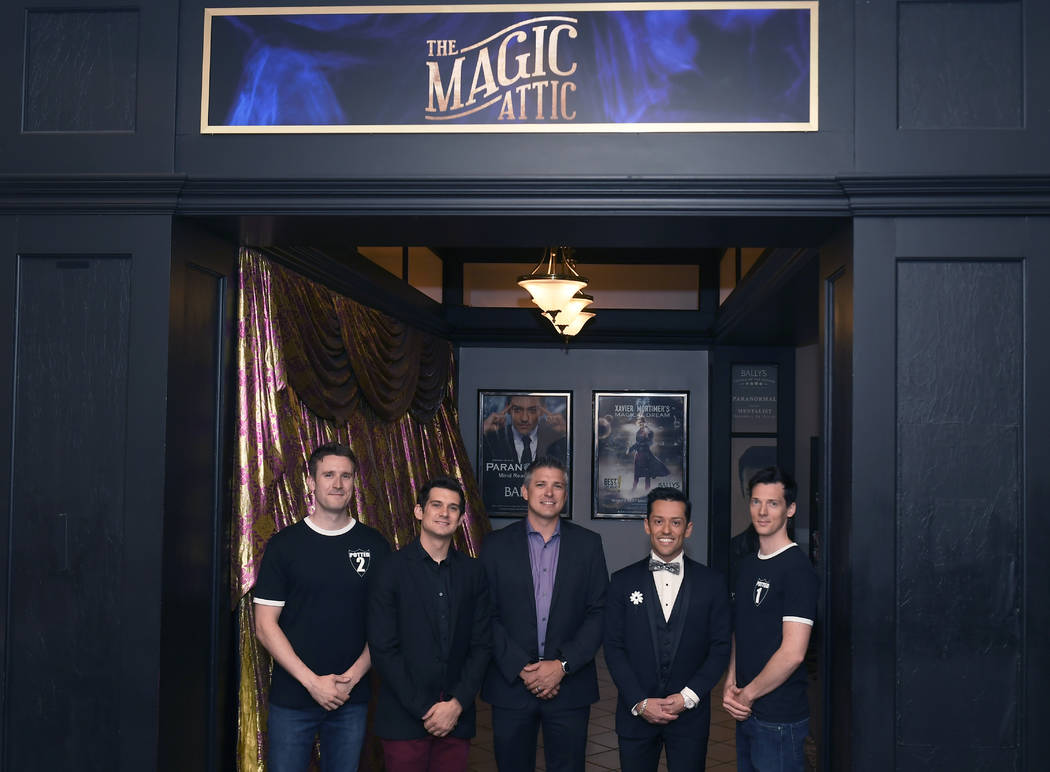 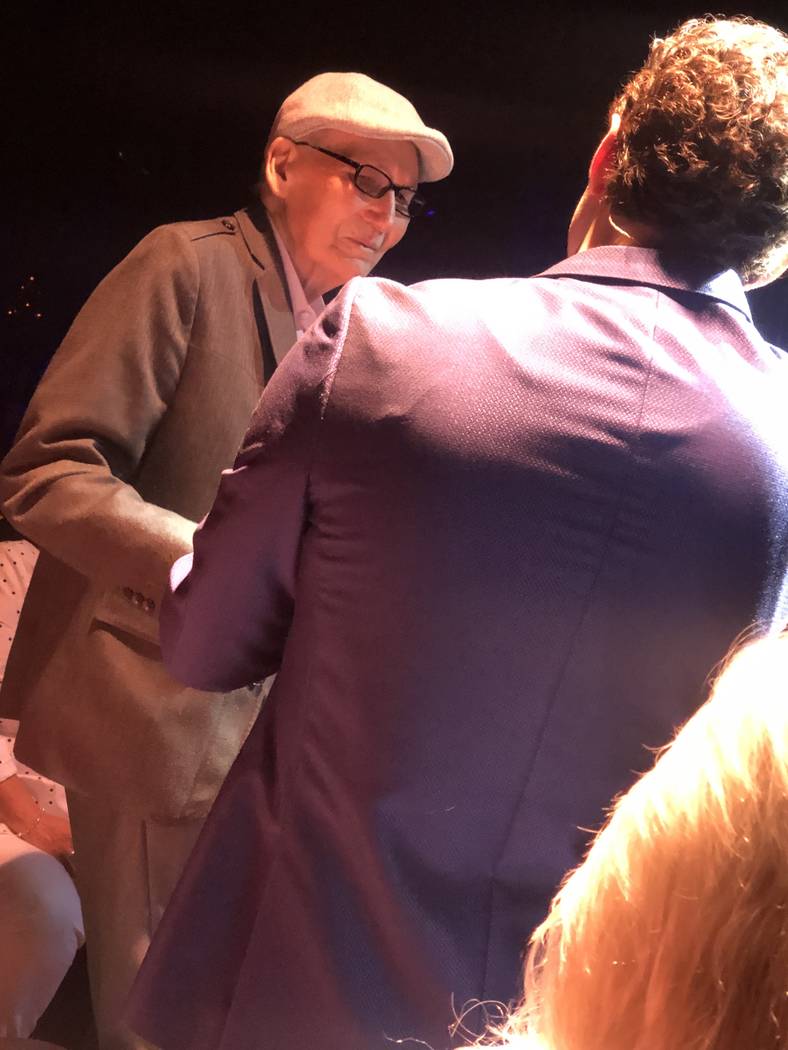 The mountain is Santa Fe & The Fat City Horns. Muhammad is represented by the headliners and musicians who have longed to see the band over the years, but couldn’t make the Monday night shows.

That has changed as of Oct. 11, when the long-running Las Vegas institution began its 11 p.m. Fridays schedule at the Copa Room at Bootlegger Bistro. Cover is $10 (a mere pittance); though the prices for the 7:30 p.m. Monday shows are being bumped to $20 ($15 for those with valid Nevada ID).

Lopez, guitarist and front man for the 16-piece band, said he’s adding the dates so the artists who visit the city can actually take part in “The Healing,” the unofficial name of Santa Fe’s performances.

“An example is, my friends in the Steve Miller Band contacted me and said, ‘Jerry, are you guys playing when we’re there?’” Lopez said Monday afternoon. “I’ve had to say, ‘No, just Monday.’ But now we have a chance to bring in a real industry crowd.”

Over the years, Santa Fe’s shows have served the dual purposes of being a great hang with one of the best bands in the country, and also a recruiting vehicle for famous acts. Santa Fe’s musician have backed Celine Dion, Donny & Marie, Bette Midler, Ricky Martin, Lady Gaga, Carlos Santana among many other Vegas headliners.

In a piece of Santa Fe lore, Gaga’s friend and bandleader, Brian Newman, hired the whole horn section for “Jazz + Piano” after seeing them one night at Copa Room.

“I thought, ‘You know what? this might be a win-win if we have the right night and time,’” said Lopez, the bandleader since its inception in Las Vegas in 1975. “Plus, we have found that our crowds on Mondays are about 60 percent from out of town or have not seen the band before.”

Santa Fe has enjoyed a revival since moving into at the Copa Room, redesigned with studio ace Ronnie Mancuso (son of Bootlegger owner Lorraine Hunt-Bono) and according to Lopez’s own specifications.

“It’s so different than dealing with suits in a casino, you know what I’m saying?” Lopez said, referring to Mancuso, Hunt-Bono and her husband, venerable Vegas crooner Dennis Bono. “We’re working with entertainment people and we can make our own decisions.”

Coincidentally, or not, Michael McDonald is playing Venetian Theater on Oct. 11-12. His musicians are known to be fans; McDonald has never seen the band live. Who knows? An influential music-industry figure might see a show, take an interest in the band and push it into the national spotlight.

“We’re hoping there might be an angel out there who will see us and put us in major festivals and change our careers,” Lopez said. “Until then, we’re going to get in as much Healing as possible.”

The Magic Attic at Bally’s era is officially on us. The name and sign at the former Windows Showroom venue were formally unveiled last week. “Potted Potter” has concurrently rolled over its cast, with Brendan Murphy and Scott Hoatson stepping in for James Percy and Joseph Maudsley. The new duo are in the show through January.

Daniel Emmet became accustomed to return visitors in his “All That I Am” run at Cleopatra’s Barge at Caesars Palace, which ended Monday night but he turned emotional when introducing first-time guest Sunday night: His 88-year-old grandfather, Ellis Shipley.

“He has never seen me sing until tonight,” Emmet called out before dedicating “Love Story (Where Do I Begin?”) to his granddad.

After the show, Shipley, who lives in Forest Grove, Ore., told me, “I have only heard Daniel on CD. He is better in person.”

Siegfried & Roy and the Vanderpumps of Bravo’s “Vanderpump Rules” are the next celeb sketches due for the famed walls of the Palm restaurant at the Forum Shops at Caesars. Vanderpump Cocktail, of course, is the branded nightspot near the Forum Shops entrance on the casino floor. Expect the whole clan — Lisa, Ken, Pandora, Jason and the dogs.

The Gazillionaire of “Absinthe” fame pointed out the similarity between his gold jacket-tux ensemble and the one worn by Nikolaj Cosger-Waldau of “Game of Thrones” at the Emmy Awards on Sunday night. Gaz commented on a retweet of the outfit on the @CBTriplett account, exclaiming, “Lawyers!” The outfits seem exact, though the actor’s shoes are not shown.

Ben Vereen at Myron’s Cabaret Jazz. The song/dance/acting legend went 3-for-3 over the weekend at Cab Jazz, selling out Friday and Saturday nights and a 3 p.m. Sunday matinee. A righteous experience throughout, led by Dave Loeb at the keys (and more this week about him and UNLV’s jazz studies program concert set for Sunday) and featuring Clint Holmes. Vereen summoned Holmes for a duet on Sammy Davis Jr.’s “I’ve Gotta Be Me.” Mind-blowing, standing-O stuff.

Iconic Las Vegas Review-Journal journalist and Nevada Press Association Hall of Famer A.D. Hopkins is hosting Las Vegas Trivia Challenge at Grouchy John’s Coffee, 8520 Maryland Parkway, from 5 to 7 p.m. Saturday. Hopkins, Megan Edwards and Brian Rouff will pitch the questions — all Nevada-related — and read passages from their own books. Bring used books for the Spread The Word Nevada campaign to be entered in a raffle drawing. No admission charge, open to the public. Bring a team or join one. More than likely, you’ll learn something.